From The Other Side Of The Glass

A championship, and how it affects so much more than just the team that won it.

Share All sharing options for: From The Other Side Of The Glass

I get what makes fans of championship teams so unbearable. I used to think it was because of something they were. Fanbases like Pittsburgh, New England, New York, they all kind of have this feel, right? So entitled. But that's exactly what they are: en-titled. It all seemed so boorish and overbearing; the crowing, the insistence on wearing their jersey wherever they go, using "RINGZ" to prove a point - all of it.

But that's not me, I told myself, shortly before steaming over some silly list that ranks Tony Romo, Colin Kaepernick, and Andrew Luck ahead of Russell Wilson (who didn't even make the top ten). I used to watch NFL Countdown and Total Access hoping for some mention of the Seahawks. Now I'm borderline-outraged that they talk about anyone else at all. I almost called ESPN when an analyst's answer to the question "Which teams have a shot at winning the Super Bowl this season?" wasn't "The Seahawks, you idiot." But you know what? Screw it. This feels awesome.

Most of the post-Super Bowl endorphin rush has worn off by now but the afterglow is still warm and invigorating. The awareness of how the world appears through the other side of the glass is still exciting, if not enlightening. Years of marveling at how beautiful the mountaintop looks have been swallowed up by the view from atop it.

I'm certainly not the only one, either. I can't go grocery shopping without seeing 20 'Hawks jerseys, 15 bumper stickers, and a half-dozen "12" flags. And it's not douchey, not to us. It's communal. What, outside of a natural disaster, could unite an entire region the way last year's Super Bowl run did? In my hometown, hundreds of people showed up to a high school stadium to form the shape of a 12 on the field. Literally tens of thousands of fans lined up to watch the team bus drive to the airport to fly to the Super Bowl. On the morning of the NFC Championship game, I made a donut run, saying "Sea" to each person I saw and every got dang one of them* said "'Hawks!" in return. Hell, a Boeing plane flew a 12 over the entire state.

*Except this one lady, who looked at me like I had just asked to buy one of her children.

Today marks the start of my 32nd year on this planet and I've never seen anything like it. That ain't a long time but my dad is 66 and he's never seen anything galvanize such a large community, either. This team, that experience, and the excitement for the future form an interweaving common thread stitched through millions of people, a multi-directional series of bridges emanating from an inspirational center-mass linking people together. During games we hug and high-five and dance with people we wouldn't so much as ask "how ya doin'?" to if we saw them at the mall (or wherever, alright?).

It's personal, too. Cheering for a championship team has changed the way I view a number of things. I'm more focused on greatness at my job than I am goodness, I see champions in a different light, I'm a less patient Mariners fan. I've seen first-hand how a championship formula can be applied over years, how a blueprint can evolve, brick by brick, from a mere idea to a potential empire. Pete Carroll has brought more than a trophy to the Pacific Northwest, he's brought a philosophy, a level of expectation from our teams that I've never known previously.

This all struck home for me sometime in the Spring when I asked my pal Jake, who is one of the most forward-thinking people I know, how the Valentine's Day shift was at the restaurant he manages. I've worked V-Day shifts at restaurants before and I know how stressful they can be. He told me how the day before, he had lost his best server to illness for a week, and another to a personal matter. He would now be covering both sections on the busiest night of the year while still overseeing the front of the house. It was an aneurysm in waiting.

So Jake crushed it; said it was one of the best shifts he's ever worked. He told me that the increased intensity of a room weighed down with romantic expectation as well as the increased workload of a huge section was more a thrill than a burden. Jake rode the lightning, gave dozens of people great service, and went home happy with bulging pockets. I asked him how and he showed me the picture* of Carroll, a huge believer in visualization in MetLife Stadium after Seattle's 23-0 victory over the Giants in December. 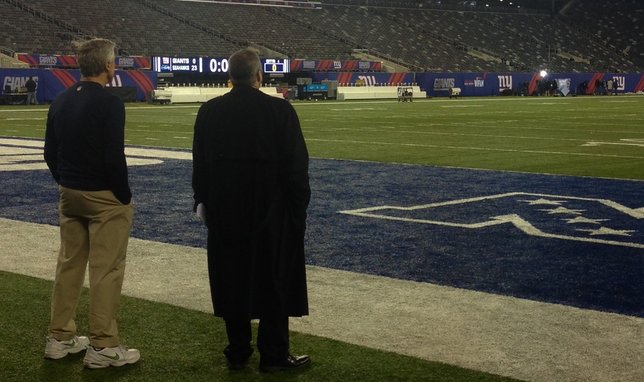 I'd seen it before but hadn't given it much thought. Jake said it inspired him, and he went to the restaurant the night before Valentine's and sat down in the corner and just looked out over the whole floor. He visualized happy customers, a bottle of wine on every table, food coming out cooked perfectly to order and on time. He saw himself flying around, handling thrice his normal responsibility with ease and joy. He stayed there until the vision seemed real. Then he showed up for work the next day and he and his team knocked it out of the park.

It might seem trite but now I start every morning with five minutes of visualizing positive interactions with the people in my life and at work, imagine handling obstacles and stress with a calm demeanor, imagine my shift, my workout, my article, my whatever, not only going well but going exceptionally. My stress levels have decreased, my joy has increased. Obviously Pete Carroll and the Seahawks aren't the first to apply these principles but they're the ones that made it take root in my life.

One of the greatest men I ever met was Frosty Westering, the head football coach at Pacific Lutheran University while I was there. Frosty was a different cat; he insisted on being called Frosty (if you called him "coach" he called you "player"), he carried the upperclassmen's bags and the upperclassmen carried the bags of the underclassmen. His practices were often conducted sans contact and/or pads, and occasionally involved Frisbee and popsicles. His players sang, clicked their seatbelts together in unison on team flights, and did a ton of work in the local community. They held post-game potlatch get-togethers at whatever field they'd just played at and invited players and family members from the opposing team to join them. Sports Illustrated called PLU "The Nicest Team In Football."

He talked a lot about visualization, too. He took his players' focus off of the other team and directed it at the things they could control. It was "we over me" to the fullest extent possible. It was about closing your potential-performance gap, not worrying about what your opponent was doing. It was pursuit of excellence through the bettering of your teammates, giving your absolute best effort in order to make somebody else better.

Oh, and he won a ton of games, too. Like, 305 of them, to this day the 10th most at any level of collegiate football. His teams appeared in eight national championship games, winning four of them. His book, a collection of philosophies called  "Make The Big Time Where You Are," was a best-seller. My Junior year, Frosty announced he'd be retiring after the season. A few of my roommates were football players at PLU and with their encouragement I decided to try out for the team, mostly in hopes of witnessing up close the man who had such a profound impact on so many people before he hung 'em up. I hadn't played football since eighth grade and as such it was a miracle that he decided to keep me on the roster. That year provided an incredible insight into greatness, an insight I admit with regret that I'd lost touch with in the years since.

And then in 2010, seemingly out of nowhere, I began to hear echoes of Frosty in the way the new Seahawks coach talked about football, about life, about true achievement. Ever since, we've seen how 53 elite athletes with electric ability and dynamic personalities have been soldered together by this neo-Seahawk outlook. You hear all the time about how pro athletes, grown men, don't buy in the way college kids do but listen to interviews with Seattle players. In the same way that nearly all non-Gronkowski Patriots have adopted Bill Belichick's dour blandness, Seahawks players are a reflection of Carroll's optimistic outlook, a bunch of alpha-male uber-studs in their mid-twenties talking about the game and their relationships with each other the same way their sexagenarian coach does.

Football is a game, to be sure, but it's not just a game. It requires a unique combination of physical and mental toughness, is untouchably lucrative, and whips millions of us into a frenzy the energy of which goes unmatched in most every other aspect of our lives. Football, at it's highest levels, is one of the most important facets of American culture. Think that's an overstatement? Consider that Super Bowls account for the 21 most-watched television events in United States history. Football has become unfathomably consequential and the Seattle Seahawks are the best in the world at it. Not only that, but nothing about the way they've done it suggest them falling off any time soon. I like the view from here.