The college players that could become Seahawks for week four.

If you’ve been a reader of Field Gulls for any length of time, then you’ve probably seen some of the video of revered OL coach Alex Gibbs giving a coaching clinic on the Zone Blocking system. What you may not realize is who he is teaching in that video…it’s Urban Meyer and his coaching staff while Meyer was at Florida. More specifically, it was Florida OL/TE coach Steve Addazio.

Now, that video was shot roughly around 2006-2007. Since then, Addazio has been an Assistant Head Coach at Florida, an Offensive Coordinator at Florida, a Head Coach at Temple, and (since 2013) the Head Coach at Boston College. In just two short years at BC, two players that Addazio had a hand in recruiting to Florida before 2011 have left that SEC program, to transfer to the lower-profile ACC, in order to renew their apprenticeship in ZBS under Addazio. In 2013, Matt Patchan made the jump, and prior to this year, former Florida OL Ian Silberman became the second. 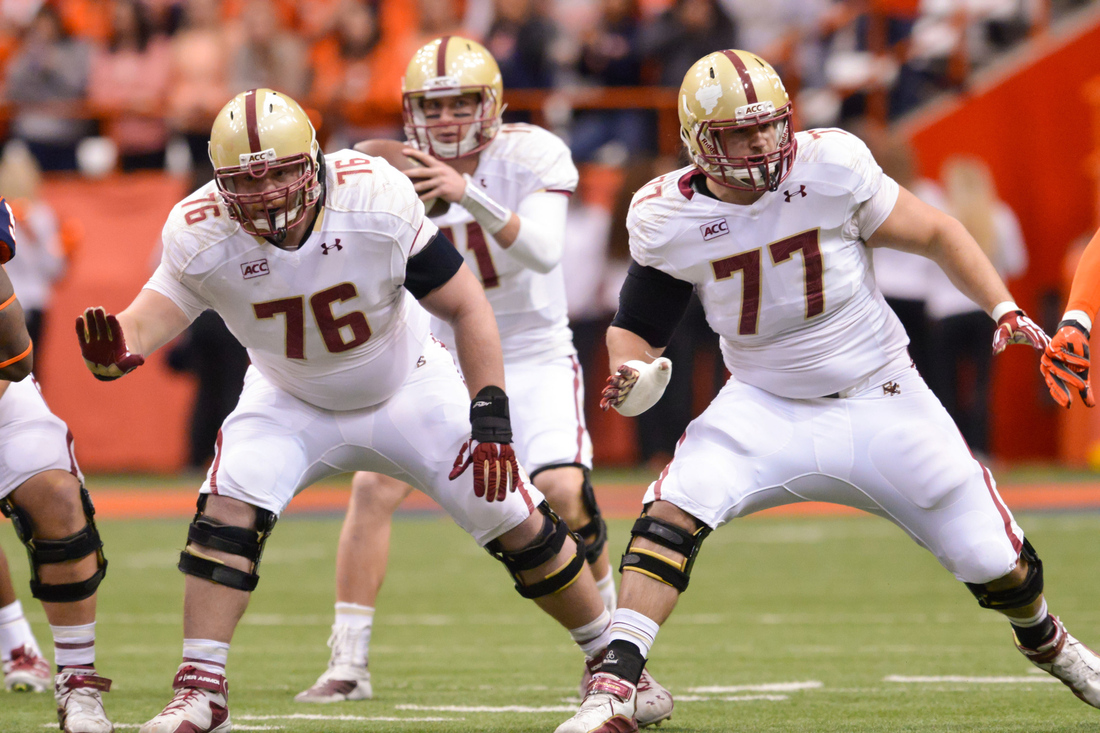 Believe it or not, I’m actually telling this story backwards, Memento-style, because I actually discovered Silberman accidentally this summer while watching tape of Jadeveon Clowney vs Florida from last year. Silberman was playing mostly LG that day and looked very athletic. So I dug into his story only to find that he had left the Gators, and transferred up to BC (a move made possible by the fact he graduated from Florida in December of 2013) to reunite with Addazio.

As both ends of the story reconvene in the present, at Boston College, we get some numbers: 1) 2177…that is the amount of rushing yards that Andre Williams rushed for in 2013 behind Matt Patchan and the Boston ZBS, 2) 338, 142, 452, 413…these are Boston College’s rushing totals for their first four games in 2014 behind Silberman (and a couple other names we’ll get to shortly). The 452 yards rushing was against the (ranked) USC Trojans and soon-to-be NFL Draft 1st-rounder; Leonard Williams.

The ZBS works, and the version Addazio is running might be the best in CFB (BC is 5th in the country, averaging 336.3 rushing yards/gm). Players are willing to transfer hundreds/thousands of miles for the chance to learn Addazio’s system. The other names/positions we can note in the following BC video are Senior LT Seth Betancourt (6’5"/300), Senior C Andy Gallik (6’2"/299), and Senior RT Silberman (6’5"/293).

Gallik is actually the more touted player of the three (currently #156 overall on draftscout), with Silberman (#510) and Betancourt (#726) falling in the undrafted range. But I like Silberman. Anytime a player that you’re not intentionally watching catches your eye on tape, it’s generally a great intuition. When follow-up study still shows you things you like, you keep that player in your rolodex.

Whereas Silberman shows great footwork technique for solid pass protection, this next player shows tremendous power in run blocking. For the longest time, Florida State’s RG Tre Jackson was getting higher projection than LG Josue Matias, but draft media is starting to match their projection to the tape. Matias is a far superior player.

Once again, I was watching a draftbreakdown cutup of a defensive player (Vic Beasley vs Cameron Erving) when Matias kept popping off. At 6’6"/331, Josue is the kind of guy that you draft if you don’t think you can/want to re-sign James Carpenter. Very similar players, only Matias has been playing LG from an earlier point in his development.

Three plays into that edit and we’ve already seen Matias block (or assist in blocking) his mark to the ground each time (and he almost does it again the fourth play). So the pass-pro is a "check". But then, about 1:25 into the clip, we fall in love. Look at this big, bad boy get out on the wing and run-block after a screen pass. It’s going to take a late-round 1st pick to get him, but if interior OL is the route PCJS deem necessary to go round one, Matias is probably my favorite OG (#50 overall).

The FSU run game has not been the same this year after losing Freeman and Wilder to the NFL, but Josue was a part of the OL that averaged 203 rushing yards/game in 2013.

Since we’re talking about running games; I’ve mentioned him before and, even though he fits none of my understood notions of what the Seahawks look for in a RB, it was reported Saturday that a Seahawk scout was attending the matchup between Miami and Nebraska. Names they could be watching include Nebraska DE Randy Gregory, Miami OT Ereck Flowers, but they could have also been studying up on RB’s Duke Johnson or Ameer Abdullah. Let’s look at Abdullah as he’s the one that is currently 2nd in the nation in rushing (92/625/6.79ypc/5TD…plus another 5/108/21.6ypc/2TD receiving).

Abdullah is listed at only 5’9"/195…at least 20lbs lighter than any current Seahawk RB. BUUUUUT…once upon a time I thought Russell Wilson and Paul Richardson were too small to be considered as possible Seahawk interests. And Ameer is pretty compelling. He’s strong, he’s elusive, he has great vision, and his burst is downright exciting. I mean, Brock Huard actually says it brilliantly, "his jumpcut is as explosive as anyone’s." Plus, AA is a team captain and I think he’s going to have high marks on character. I still don’t think the Seahawks would like most backs this size, but I’m coming around to Abdullah being that room-tilting exception.

One more thing before we leave that last tape…I normally avoid writing on players I don’t like; I much prefer to promote the players I WOULD draft, but that Miami defense is a dirty squad. I’m kind of thinking now that I won’t be looking at any of their players going forward.

Switching gears to stopping the run; I was surprised to find out that Penn State is actually leading college ball in rushing defense. Not only are they allowing less than 50 yards per game, they also lead in yards-per-carry allowed. Then, looking into their DL, I find this player:

Zettel is a highly disruptive player at the point of attack, using a nice array of interior rush moves to get into the backfield. He’s sort of what we hoped Jason Jones was gonna be a couple years ago. Or, it appears, he has the frame that he could bulk up a bit more and play a combo of 3T/5T like we hoped Scruggs could do.