The college offensive tackles to really watch this week.

You may not realize it, but behind the scenes of Field Gulls there is this incredible crowd-source that goes on. Multitudes of writers constantly working parallel, yet in concert. So when our cap guru @DavisHsuSeattle sends me a text message detailing the contract and cap possibilities that may become possible by cutting certain player(s), my wheels start to turn and I start to scout-to-order. In this case, the simulation was a list of about six players that become keepers IF we can cut Russell Okung a year early.

With Okung’s glass ankles and recent almost-shoulder injury against Denver, it’s a pretty evocative suggestion going forward without him. I won’t even attempt to get into the dollar ramifications of it, but I will say this…John Schneider has consistently shown the planning and foresight to draft many players a full year before he needs them (most often done with players 4th round back…draftees from the first three rounds are often immediately used): Jordan Hill a year before letting Clinton McDonald walk, Tharold Simon a year before letting Brandon Browner walk, Jesse Williams a year before cutting Red Bryant, etc. 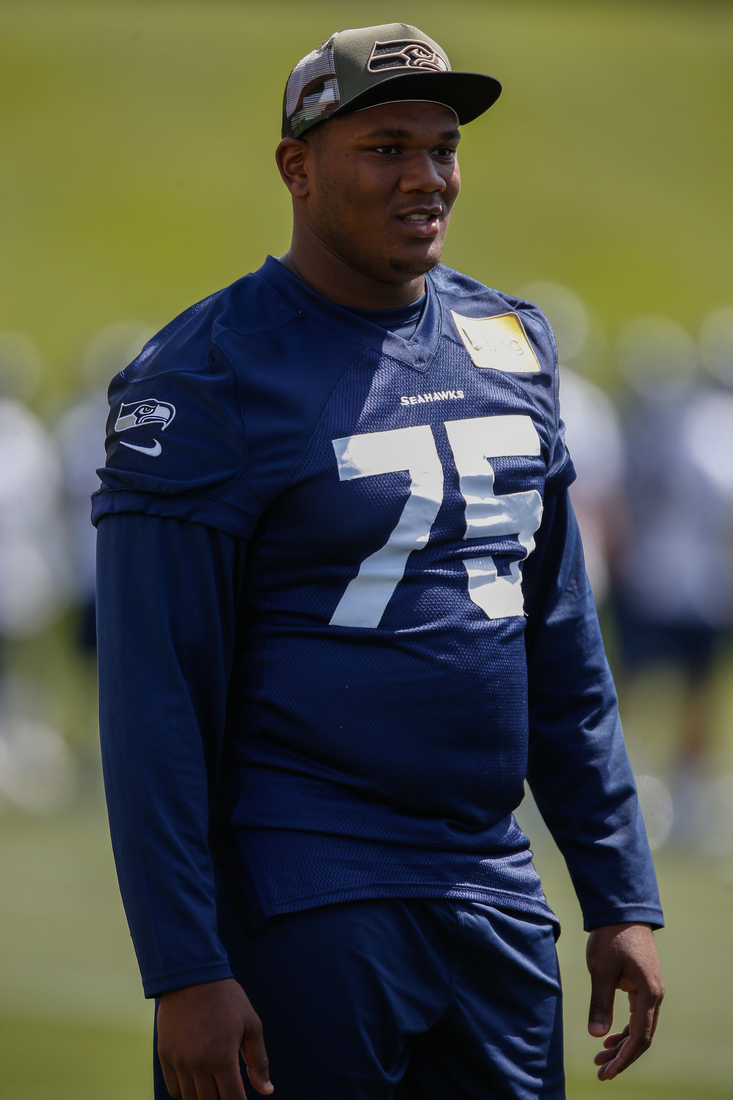 Now, we move that idea forward…what did we draft in 2014 and who does it allow us to cut loose? Kevin Norwood could allow RFA Jermaine Kearse to walk. Kevin Pierre-Louis could allow Malcolm Smith to walk. Erick Pinkins could allow Byron Maxwell to walk. And Garrett Scott (or UDFA Garry Gilliam) could allow Okung to be cut. Having said this, it’s important to note that some of those planned moves got sidetracked (Williams and Simon both currently still missing time injured). In those cases, you sometimes have to draft replacements again the year you’ll actually lose the vet cuts, and then play "Always Compete" between the 2nd year players and the rookies. In a LT competition, we can also add in what will become 3rd year player Alvin Bailey.

The long-story short version of this: Bailey, Scott, Gilliam, plus a 2015 draftpick competing for the starting LT job next year while retaining a handful of in-house talent. It’s an idea. I like the idea. So I’m going to dedicate this week’s college football Ones Two Watch to the left tackle position.

Brandon Scherff opens the Saturday slate of games in Iowa vs Purdue 9am PST. There is little to no chance Scherff, nor A&M’s Cedric Ogbuehi, will be available when Seahawks hit the clock. Andrus Peat, for as highly as he is currently projecting, A) is a junior who doesn’t seem like he should/would declare, B) is surprisingly under-athletic. La’El Collins’ stock has been dropping like crazy…partly because he likely moves to OG, partly because (as I pointed out on twitter this week) Collins is on the LSU lazy list:

Remember this story? The lazy LSU Tigers. Claiborne was gone before that year, but have to wonder. http://t.co/q46Ke7EMlB

Ereck Flowers of Miami is #5 on the draftscout OT list, and his squad takes on Duke at 4:30 on ESPN2. The first time I watched Flowers, I was watching 2013 tape and was highly disappointed. Here is a police reenactment of that tape:

Clearly, I’m kidding. But kinda not. Sincerely, the 2013 tape is a very strange mix of jumps and lunges and poor footwork. But here is proof that Flowers’ 2014 tape has been better. The Hawks were reported in attendance at this game:

Flowers is probably losing more than he’s winning there against Randy Gregory, but Gregory is thought to be a top10 pick. Flowers, if stock isn’t dropping noticeably from that tape, will likely get crossed off most scouting lists when his SPARQ numbers become known after the combine.

This brings us to #6, Spencer Drango of Baylor, who will play at 5pm on Fox. At 6’5"/315, Drango has pretty ideal measurables for a LT, and while he doesn’t "wow" me with his athleticism, he plays with good, consistent technique. Anecdotally, Drango and Baylor are one of three teams nationally that came into this weekend having not allowed a single sack all year (also New Mexico State and Texas Tech; though Tech allowed a strip-sack Thursday to OkSt).

I can’t remember who, but someone mentioned Zach Martin as a comp for Drango. I think there might be some truth to that. I’d guess Spencer has longer arms than Martin, though, and therefore has a better chance to stick at LT.

Sean Hickey (6’5"/291/#80 overall) is the LT for Syracuse, and the Orangemen (5pm – ABC) are another team that ranks top-10 in the country in sacks allowed (only 1 given up). After playing 4 games at LT in 2012 while Justin Pugh was injured, then jumping back to RT upon Pugh’s return, Hickey has taken over the full-time LT starting gig since 2013. From last season:

In addition to being too much of a waist-bender, I find that Hickey is sort of an OT tweener. He’s neither a supreme athlete nor a supreme technician, so it’s tough to see him getting away with being as underweight as he currently lists. If you’re going to be 291, you probably need to run 4.88 and/or have perfect technique. Hickey is more of a B to B+ across the board and has yet to justify a 3rd-round projection, in my opinion.

This weekend will mark the return to health and playing of two more OT…Colorado State’s Ty Sambrailo and Washington’s Ben Riva. I have yet to be able to study Sambrailo (#73 overall), but with the Rams taking on Boston College at 9:30am on ESPN3, I could very much see the Hawks sending a scout to watch Ty, along with BC tackles Ian Silberman (#510 overall) and Seth Betancourt (#726).

Riva is someone we know peripherally simply from being a local boy, but I also recently took time to watch him more specifically. I went back to UW’s bowl game last year versus BYU:

Riva (6’6"/313), obviously, was playing RT in 2013 and that’s still where he’s playing, but I was REALLY pleasantly surprised by watching him so closely. There’s something about his movement and build that creates a nice balance of technique, athleticism, power that reminds me a TON of Justin Britt. This is both a compliment and a bit of a bummer. Just as I don’t know that Britt has LT in his future, I’m not sure that that’s in the cards for Riva either. But as draftscout’s #596 overall player, I do think he’s someone to log as a priority FA target. Huskies play Stanford at 1:15pm on Fox.

Finally today, I always try to save a really nice sleeper for last. This one came to me while doing my due-diligence and simply studying players from the leading rushing teams in college football. The team is Pittsburgh and they’re 12th in the country in rushing with over 304 yards/game. We can assume their OL is doing some solid run-blocking…this is #1 need for a future Seahawk Olineman. But we still need them to pass-protect well enough to keep Russell and our slowly-expanding passing game on track.

While Pittsburgh isn’t in the elite of teams in terms of sacks allowed, we have to note progress; in 2013 the Panthers were infamously one of the four worst teams in the FCS for giving up sacks (43 allowed in 13 games…3.31/game). This year, they have cut that number down to 1.00/game through four games. Researching who they have playing OT, I find it’s a guy named TJ Clemmings on the right side. I also find that, for his first two years at Pitt, Clemmings was a DE; appearing in 8 games in 2012, with 20 tackles, 1 TFL, and 3 QBH.

I’m not sure what preceded his switch to the offensive side of the ball, but it came a year after the hiring of former Wisconsin OC (and Russell Wilson coach) Paul Chryst. In the process, Clemmings has gone from 6’6"/290 DE to a 6’6"/315 RT. And the dude carries that 315 really well. Like, REALLY well.

Can you tell from that edit that TJ has only been playing OT for a year? At worst, he makes some mental mistakes or misses an assignment. But even in those mental mistakes, he often shows enough athleticism to recover the mistakes mid-play. Clemmings reminds me of somewhere between Lane Johnson (also a late-convert to OL) and Tyron Smith. In 2011, Tyron ran a 4.93, benched 31 reps with 36" arms, and broad-jumped over 9’ while measuring 6’5"/307. Clemmings’ SPARQ could end up being higher if, in fact, his weight is up to 315 and he’s maintained his sub-5.00 speed.

Whereas there are elements in Ben Riva’s game that just feel like a now-and-future right tackle, there is so much athleticism in Clemmings’ tape that I really want to see him get reps at left tackle. His pass-sets are like butter, and the way he redirects the edge rusher’s arc way outside of the QB with a single shove is big boy stuff. I ran his name by @zjwhitman and Zach tells me the 40-time from his junior day (at 305lbs) was great! I am SOOO excited to watch 2014 tape on him. Or maybe watch him live. Pitt plays Akron at 10:30am on ESPN3.