The Drive: Zero Yards and a Cloud of Potential

The Broncos drive down field and tie the game with a field goal. Seattle responds with a three and out including a false start penalty and ending with a sack. How does turgid, sloppy and ultimately boring football inspire hope? Analysis and a little potion I like to call "Hazelnut Brown Nectar."

Share All sharing options for: The Drive: Zero Yards and a Cloud of Potential

At Sports Fool I am working through every play of last weekend's Super Bowl rematch rematch, in which the Seahawks avenged a brutal loss to the Broncos in week one of the preseason, and recaptured the Intercontinental Championship of Football Americano. Jesse Williams, for obvious reasons, was not able to share this achievement with his teammates. Reached for comment, Williams is thought to have said "Cark it, ya chazzwazzer."

Chronologically, we are at a nondescript drive. In which Seattle exhausted three plays and a penalty to achieve zero yards before punting. Why pick this drive to showcase for you, the ever busy Field Gulls' reader? I have no idea. Onward.

Percy Harvin does not return Brandon McManus's kick. The Seahawks have received very little value this season from Harvin as a return man, and in fact rank 30th in the NFL in kick return value. Most of that negative is concentrated in Harvin's one fumble lost. As for positive, that little bit is from San Diego avoiding Harvin and instead pooching to Luke Willson and Doug Baldwin. Something of a slump buster awaits Seattle Week 5. Washington has been the worst team in the NFL at kicking and defending kickoffs. Opponents have averaged 35.1 yards a return, and 50% of kicker Tress Way's kickoffs have been returned. According to his coach, Ben Kotwica, Way is "okay" and a "great young man." Which in coach speak means he's "terrible," but "I don't want to hurt his feelings."

Which fair catch lands Seattle at the twenty, as is prescribed in the rule book this Wikipedia article I am skimming tells me. Huh. Seems this Canoot Rocky guy was pretty important.

We begin action already in progress so CBS can show us the gaping pseudo-maw of a decapitated salmon, and Phil Simms and Jim Nantz can discuss who will cook Nantz's fish. Nantz, ever nurturing to his friends, assures Simms he will.

The play is simple, but its design asks and answers a few questions.

Seahawks motion an inside zone right. It achieves the vacuuming in of the linebackers intended. Particularly, because Denver is rushing five, both flats are wide open to underneath routes. 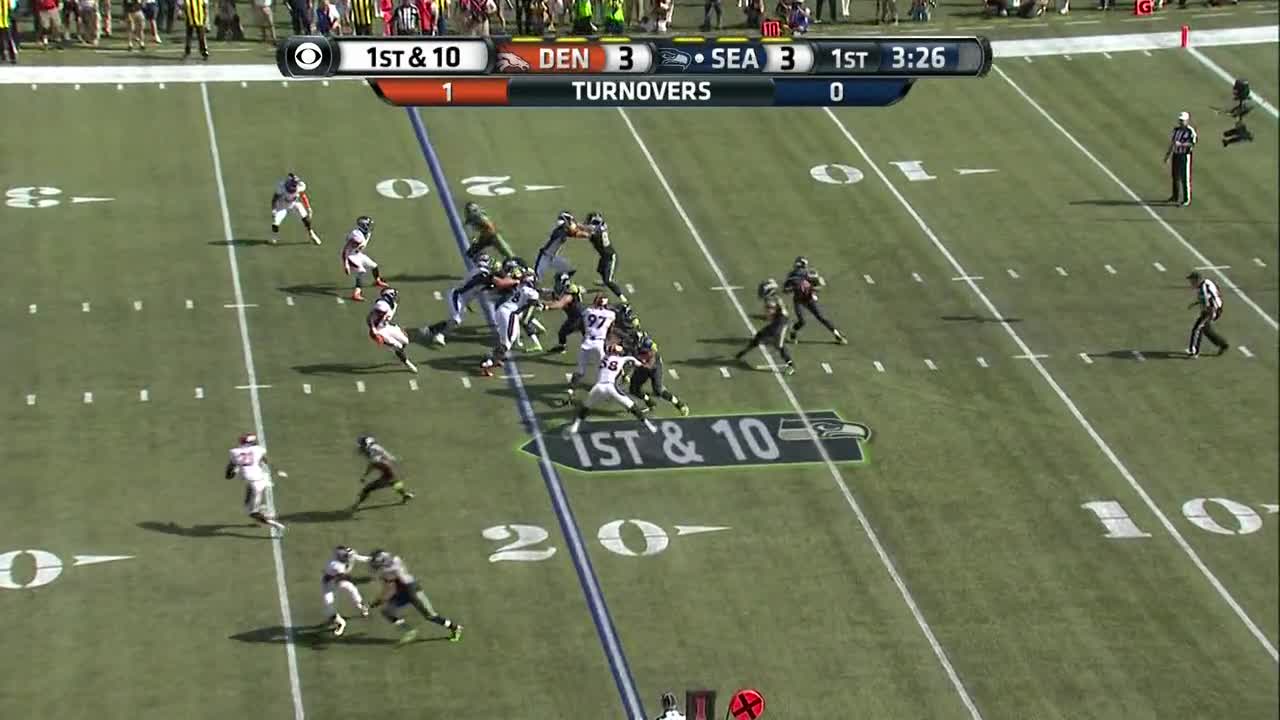 Harvin is running out of the left slot and Aqib Talib is covering him. Talib is playing off and using the cushion to watch Russell Wilson. Odd as it seems, Denver is just not respecting Seattle deep. One could hardly envision a more dangerous deep passer. Wilson has touch, accuracy and arm strength. Plus he can checkdown to himself in the form of a scramble and exploit space created by receivers running deep. Yet Wilson's deep targets are well down this year. A season ago, he ranked second among starting quarterbacks, and less than a percentage point behind Nick Foles. Now he's hovering in Philips Rivers territory. Deep passes provide most of the value of the passing game. Wilson is no worse a deep passer than before.

Seattle may be pass blocking worse than a season ago. Russell Okung has been working himself back to shape through the season, and rookie Justin Britt is struggling badly. Okung, following the bye, should be as fit and healthy as he will be all season. Or Seattle may be scheming fewer blockers to help Okung and Britt, and that might be increasing Wilson's completion percentage but reducing his ability to stick in the pocket and find a deeper route. Or Seattle may simply be running more short routes. Or, even, a side effect of Wilson attempting fewer heroic scrambles may be fewer improvised routes which break for big gains.

Whatever the case, this may be one of those "problems," which speak of hidden potential. Between Harvin and rookie Paul Richardson, the team certainly does not lack for speed. I can't imagine a coach like Pete Carroll, whose defense consists of eliminating big plays and forcing offenses into high volume, low value drives which inevitably falter, fall into third and long, and thus bleed turnovers; I can't imagine Carroll wants his offense to putter forward, station to station, casting Wilson in the role of Thin White Duke, and by that I mean Chad Pennington.

And so Harvin runs a speed out against no coverage and lunges forward along the sideline for seven, which is really eight. Talib lands an elbow drop on Harvin because Aqib Talib secretly wants to be the Ultimate Warrior, I guess. Or maybe he's just a slow, nasty brute of a corner with a rhyming name and a lengthy and growing list of former teams.

Second and three, which is actually two.

The monsters in Romero's original Night of the Living Dead are humans at war with each other. That the zombies are slow and witless, an encroaching horde more reminiscent of a flood than a pack of predators, underscores the desperate discord between people, no matter the circumstances or cost of their disharmony.

Justin Britt is on this team for his run blocking, and to a lesser extent, because he costs little against the salary cap. Zone blocking uses an ultra-simplified method of blocking in part to avoid nasty screwups in organization. Here we see a stretch right reaching some kind of fruition. 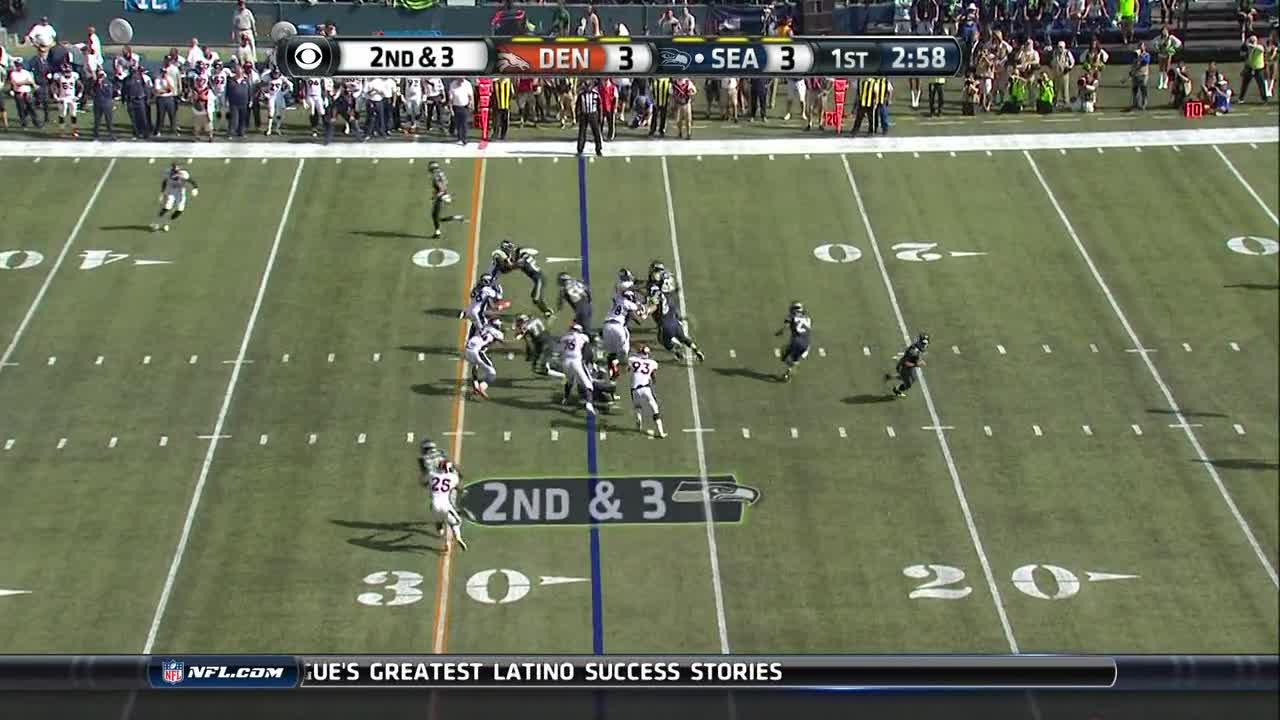 But then the lights go out, and slow as they are, the living dead are unstoppable in their multitudes. Malik Jackson throws Britt to the turf. At about the same time, Max Unger is losing his battle with Terrance Knighton, and thinks to salvage his block by notsomuch cut-blocking Knighton as lowering himself belly first to the turf and then rolling around. DeMarcus Ware arrives from the backside. And Lynch is stopped after gaining two-thirds of a yard.

The Seahawks field the most efficient run offense in football. Runs by Seattle are successful a remarkable 58% of the time, tied for highest in the NFL. I had thought, after watching the new offense Bevell had cooked up in the preseason, that the Seahawks were planning on stretching the field horizontally in order to exploit a soft middle by running the ball. That seems to be happening, and that seems to be working. But while Lynch is the third most valuable running back by DYAR, and fifth by DVOA, Robert Turbin has again contributed little but blocking and receiving. I trust this coaching staff's decision to ensure Christine Michael is healthy, and to ensure that he earns his touches, and doesn't stumble into them because of Turbin's continued stumbling through arm tackles.

Which trust shifts the blame markedly. Christine Michael, you are a special talent on a special team poised to repeat as Super Bowl Champions. Seize your opportunity. Lynch is neither thunder nor lightning but superheated plasma before sound and light part. He is 4.46 Combine certified fast, and not so much punishing as beat-you-dead. But Seattle is managing Lynch prudently. He has back problems. He's 28. And every time Turbin earns a touch over you, Christine Michael, the Seahawks are leaving yards on the field. Stop the madness.

Third and two meet third and seven. The loss of win probability is 2%. Given the Seahawks reliance on running to both pass and run, I would imagine the actual damage is even more severe. Seattle is supposed to force teams into crawling on their belly for every first down, and opportunistically feasting on every third and long. But short pass, run and a penalty, and roles are reversed. (Wilson only has seven pass attempts on third and six or more yards, half or fewer than any other NFC West quarterback or quarterback tandem, but never mind facts whilst I'm weaving a yarn here.)

Tight ends on either edge chip, accounting for San Diego's incessant edge rush in Week 2, but Denver doesn't edge rush, sends only four, and the Seahawks pass blocking holds up. For a little while. It is Wilson, and to an equal degree, this infernal play call, that finds pass rush where there had been none.

Both tight ends are running zero-yard routes, Luke Willson a dig, Zach Miller an out, and both would be as good as stationary*. Baldwin is running a deep dig on the right and is well covered. Jermaine Kearse has a step but Denver has deep safety help. And Harvin is bracketed front and back. It's five against three, the line to gain is seven yards down field, and the Seahawks have nothing like a Calvin Johnson, Demaryius Thomas, Keenan Allen or Alshon Jeffery. There is no throw, and *the Seahawks seemingly wasted tight ends may be attempting to clear linebackers away from a potential scrambling lane for Wilson. 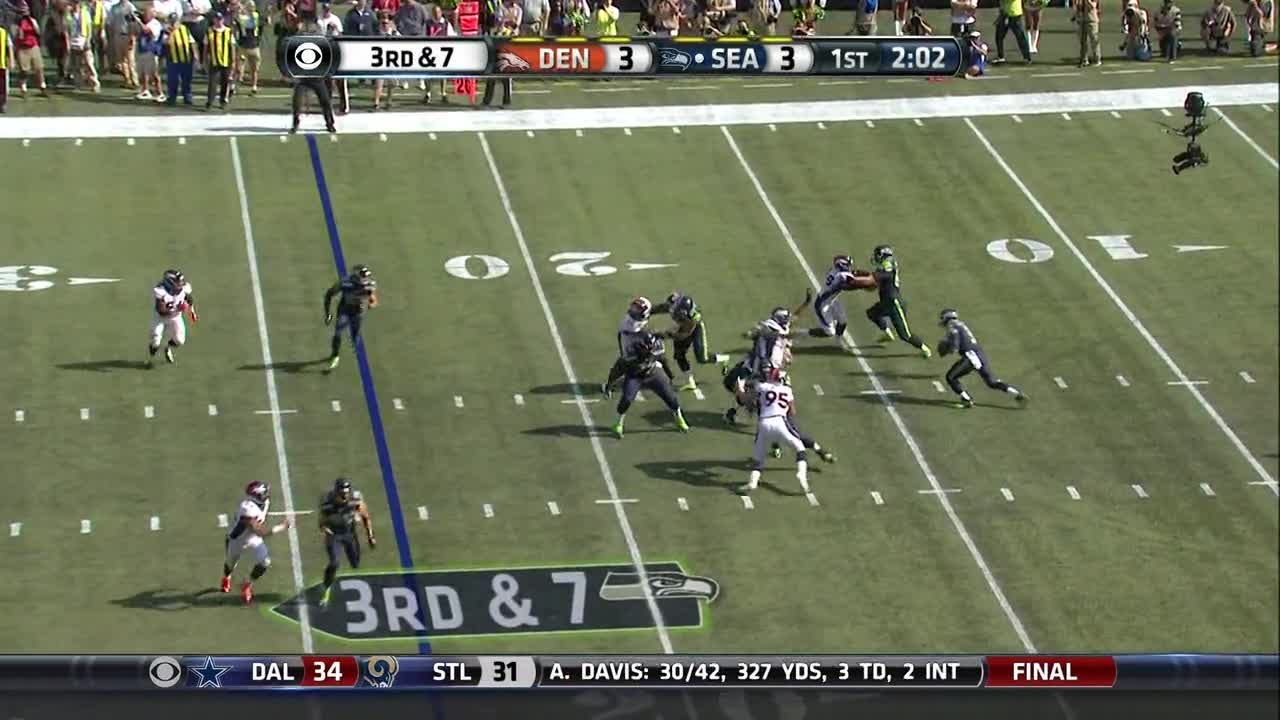 So he does, and it looks as if he more or less runs himself into the tackle of Von Miller. But it is this that precipitated the scramble. Another pioneering barrel roll block by Unger.

And so Seattle punts.

It would not be wrong to say this is a boring series that proves little. But here's a different interpretation.

We expect a Super Bowl winning team to have peaked the season it won a Super Bowl. This is the underlying logic, assuming any logic exists, behind analysts' and pundits' assertion that it is too hard for a team to repeat, and Seattle, despite being the best team in the NFL, will not. A peaking team should have greater potential for regression than progression--in fact, it must. Were it not regressing, it would not yet have peaked. But if English were written in ideograms, I would be suddenly struck illiterate, yet I would still know this:

Is wholly incompatible with this:

That's my made-up ideogram of the Seahawks ca. September 26, 2014. The ball cap allows you to know which ways he's -gressing.

And Russell Wilson, he's struggling a bit with Darrell Bevell's playbook for the first time wide open. Struggling, not throwing deep, maybe still a little too slow, twitchy in his reads, and liable to scramble before he needs to. Struggling, the Seahawks best, most important player struggling while his surrounding offense stands at partial strength; struggling, helming the second or third best offense in the NFL.