Share All sharing options for: Field Glasses: As Easy as 1-2-3

Much has been written, both on Field Gulls and elsewhere, about how the Seahawks use zone running to set up 1-on-1 opportunities off of play action. Mr. Daniel F.A. Kelly has produced some excellent material on the subject, and I'm not just saying that because he's my boss. (Well, maybe a little bit).

It's worth noting that not every team in the league uses the running game to open up their passing attack. There are some teams (Broncos, Saints, Giants, amongst others) who prefer to do the exact opposite.

In principle, those teams want to attack the perimeter of the defense with quick hitters, and the deep middle with slower developing bombs. The theory is that box defenders will become acclimated to chasing every play towards the sideline or towards the endzone, and you can take them by surprise by going right up the middle and pounding them in the face.

These teams do have a running game, and it often produces substantial yardage (The Mike Holmgren Seahawks teams worked on a similar principle, although we were less committed to it). In fact, I recall a conversation I had with Denver Broncos über fan Endzone about this very subject prior to the Sübarbowl.

His contention was (in summary) that the 2013 Broncos had a better running game than the 2013 Seahawks. To support his argument, he cited the Yards Per Carry of Montee Ball (4.7, 8th in the NFL) and Knowshon Moreno (4.3, 20th), which were both better than Lynch (4.2 23rd), Furthermore, the two Denver backs combined for more total yards.

While I won't rehash our entire discussion (feel free to read it if you like), I will re-state my closing argument, as it's relevant to the topic of this article.

I'm going to use a chess metaphor to make my point.

In chess, when White opens with his Queen Pawn, black has many possible replies. One system he can employ is the Benoni Defense. In the Benoni, black "taunts" white into building a huge central presence with his pawns. White is more than willing to do so, because chess players have known for hundreds of years that a commanding central pawn structure is a huge strategic advantage.

So why does black not just allow, but encourage this? Partially, it's self-selection bias. A black player not comfortable in this sort of game will chose a different opening.

But there are many strong players who favor the Benoni, because Black doesn't just give white that pawn center for nothing. While white is spending moves setting up his central pawns, black is moving his minor pieces (knights and bishops) to better squares and acquiring a lead in development.

It's a trade at the strategic level. Black allows white an advantage in one part of the game, in order to give himself an advantage in another. The player who can best capitalize will emerge the victor.

Football works the same way. In the NFCCG against San Francisco, Seattle had 17 rushing attempts into an 8-man box, and 10 into a 9-man front. Do you really think Denver's going to be running Monte Ball against a 9-man front?

Seattle pays the price for running Lynch into a 9-man box (our strategic concession) in the form of a lower yard/carry. But as a strategic advantage, we'll see stacked boxes on a regular basis that benefits our passing game.

It doesn't matter that the Denver RBs have a better YPC than Lynch. It doesn't matter that in aggregate, they have more yards. Our rushing attack is more important than yours, because ours dictates how a defense HAS to play, whereas yours merely capitalizes on teams putting six defensive backs on the fied.

Claiming the two are even comparable (especially using YPC as a metric) is as ridiculous as claiming the Seahawks and Broncos passing attacks are comparable. After all, Peyton Manning finished with 8.31 yards per attempt (3rd in the NFL) while Russell Wilson was 4th -- 8.25!

In summary, the Seahawks don't just run the football because they're very good at running the ball. Honestly, they're only slightly above average in that department. Seattle runs the ball with as much persistence and aggression as they do because repeatedly pounding the rock forces a defense to play a certain way, and they can capitalize on it.

What often gets overlooked is that the Seahawks also do the reverse. They don't just use their running game to set up big passing plays. They use their passing plays to set up future runs! While most teams do one or the other, very few teams in the league have the combination of personnel and coaching to do both!

To see what I'm talking about, I've highlighted three plays from Seattle's overtime drive against Denver. I've tried (with limited success) to keep the Xs and Os brief, as the purpose of this article is to take a step back and examine how the plays interact with each other, rather than how they're supposed to function in a vacuum. 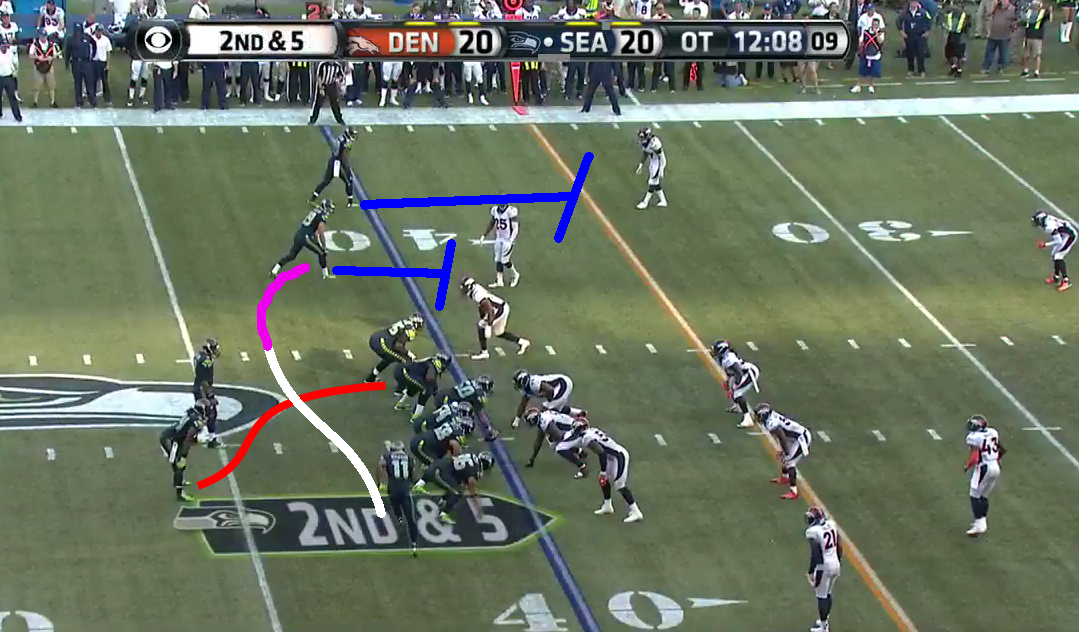 Per usual, SBN automatically resizes all images used in articles.  To see them in the original size, click on them.

Harvin's pre snap motion from left to right draws an adjustment from Denver's defense. Without seeing the secondary in action, I can only speculate, but I believe they're in a look known as "half quarters". There's two deep zones on the offensive left, and they're pattern-matching on the right. (The corner takes the deepest route in man, while an LB sits on anything underneath). This leaves the Broncos without any help on the backside, but Zach Miller or Marshawn Lynch isolated against Aqib Talib isn't exactly a profitable matchup for us.

The offensive line Run Action blocks. If you haven't heard the term before, "run action" is a cross between "run blocking" and "play action". The OL blocks exactly the same way the would for a run, which makes the play action fake far more convincing since an LB keying on the OL blocks would still be fooled. The drawback is that the OL cannot hold their blocks for nearly as long as they could in standard pass protection. The passing routes have to be fast developing, with none of the double-move deep bomb stuff that teams normally favor.

Denver's linebackers had been seeing a steady diet of zone runs all day long. They were fooled for just long enough that Wilson got the ball to Percy Harvin on the perimeter with plenty of room to work. By all rights this play should have gone for a whole bunch of yards, and possibly a touchdown if safety Rahim Moore misses the open field tackle on Harvin. Unfortunately WR Bryan Walters laid an appallingly terrible block on Chris Harris, who was able to get two hands on Percy.

I'll happily take a 6 yard play on 2nd and 5, but oh man did we leave a lot of yards on the table here.

The next play we're going to look at is the very next snap.

Sitting in his nowhere land.
Guarding nobody. 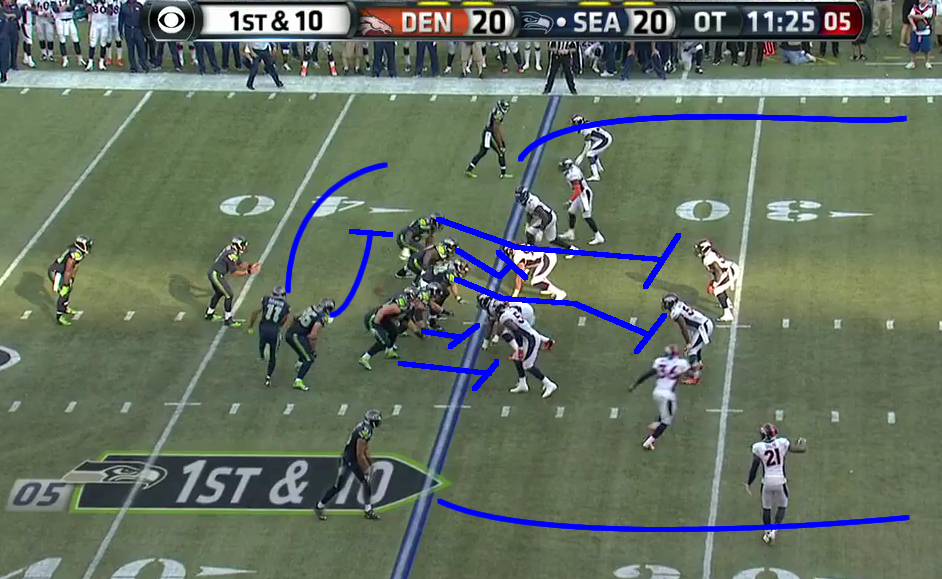 The Seahawks (again) come out with 11 personnel (1 RB, 1 TE). Again, they align in a 2x1 set. Harvin (again) motions across the backfield from right to left, and Denver (again) rotates their safeties to account for the change in formation. 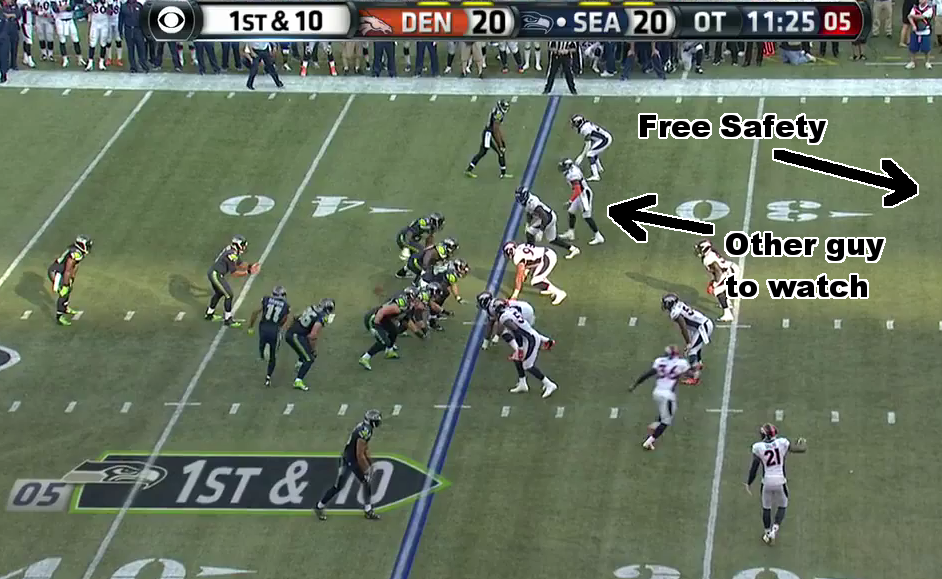 The threat of Harvin getting the ball on a screen (again) is clearly on the defense's mind. They know he very nearly broke it on the last snap. The Will LB flattens out and removes himself from the box. The FS comes upfield so that if Harvin gets outside the LB, the safety will be in position to make the tackle.

This leaves the Broncos with six guys in the box, against six Seahawk blockers. Lynch clears the line and tries (unsuccessfully) to juke the strong safety. Had he managed, there was nobody left between him and the endzone.

Seven yards on first and 10 because the Broncos were so worried about stopping the screen to Harvin that they couldn't even be bothered to keep seven guys in the box.

Skipping aheads a few plays, we arrive at the game's penultimate snap.

Here, Seattle is using a Levels concept that I've written about in the past with two new and interesting additions. The first is that we're using run action in conjunction with Wilson's naked bootleg to sell the play action fake. Ideally, we want Vonn Miller (the backside OLB) to crash down the line on the run, leaving Russel Wilson with plenty of space and a clean throwing lane into the endzone.

The second addition to the concept is Harvin's flat route. It's an emergency outlet if the run-action fails and Miller pushes upfield. That's particularly likely to happen to Seattle, because edge defenders are often coached to stay home in order to prevent Russell Wilson from running for big yardage. Harvin's route is also deadly against pure-man. A defender trying to follow him behind the line of scrimmage is likely to get decapitated by an offensive lineman, and going the long way around isn't much better.

In this case, Miller didn't bite on the run fake, and Wilson dumped it off to Harvin.

The Seahawks can do all of this out of the same personnel groupings, all the way down to motioning Harvin across the formation from right to left every time. They're not just disguising their intentions. They're actively attempting to lead the defense into guessing wrong by mimicking a play they'd previously had success with, only this time doing something completely different.

It's a beautiful thing.