Hey, it's Enemy Reaction time! Why, in my old age (my early 20s) I'd almost forgotten how to do these with the distinct lack of Seahawks victories over the past couple of weeks. But a great way to save your season and get out of a funk is to once again completely shut down the San Francisco 49ers on their home ... I guess you could call it turf. It was 19-3 last year, it's 20-3 this year, and it's the 3rd straight year Seattle has played at the site of that season's Super Bowl and held the host team to 0 touchdowns (NYG 2013, ARI 2014).

Normally when the 49ers lose, they "Go Niners Nation." I mean, it is Niners Nation, but the term means that they completely melt as a fanbase in a way that no other SB Nation NFL site manages to do. But this game was different. It felt like they were resigned to defeat after the opening possession, and the mood of NN reflects as such. Field Gulls was oddly light on comments, but I mark that down to it being a 5:30 PM PT kickoff on a work day. Either way, I've got a fresh Enemy Reaction lined up for you, starting now. 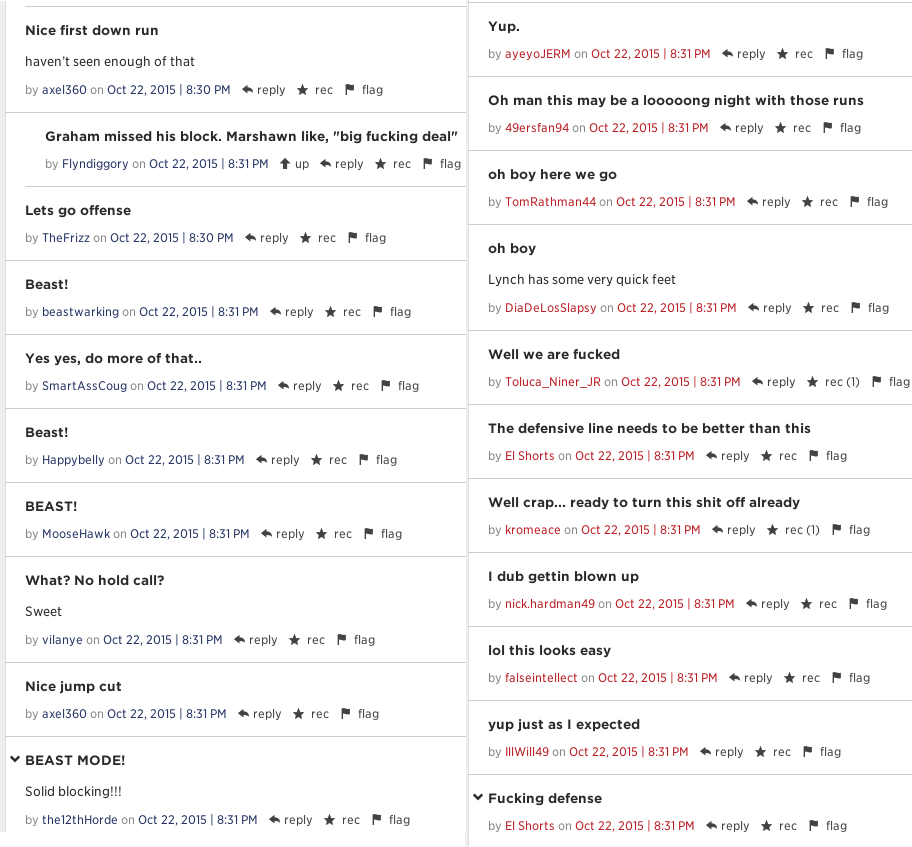 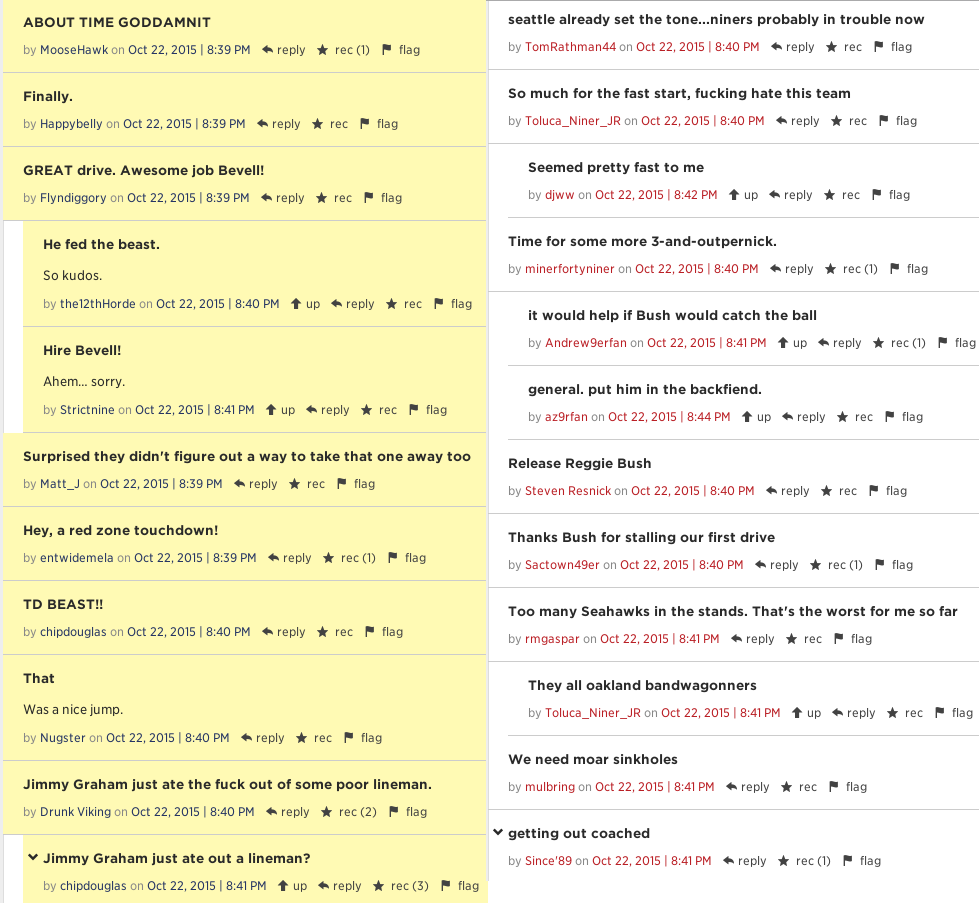 Did someone ask for a Lockett touchdown? (10-0 SEA)

3:16 touchdown NO RELIGION Russell Wilson to Tyler Lockett for the 41 yard touchdown (17-0 SEA) 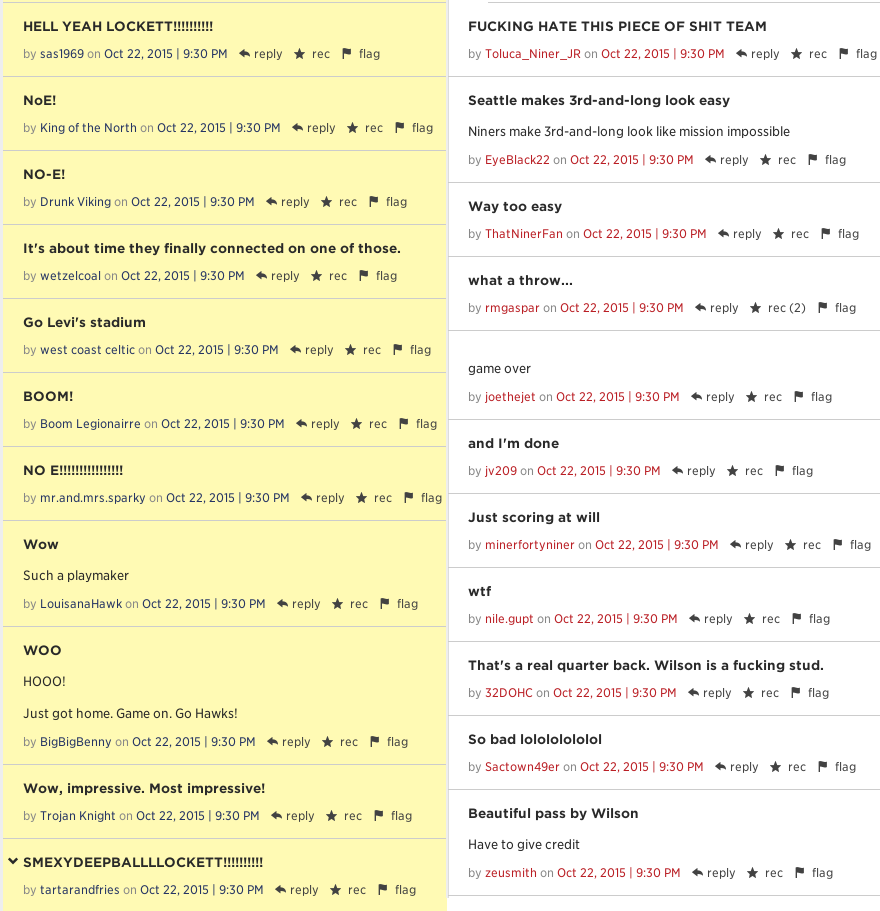 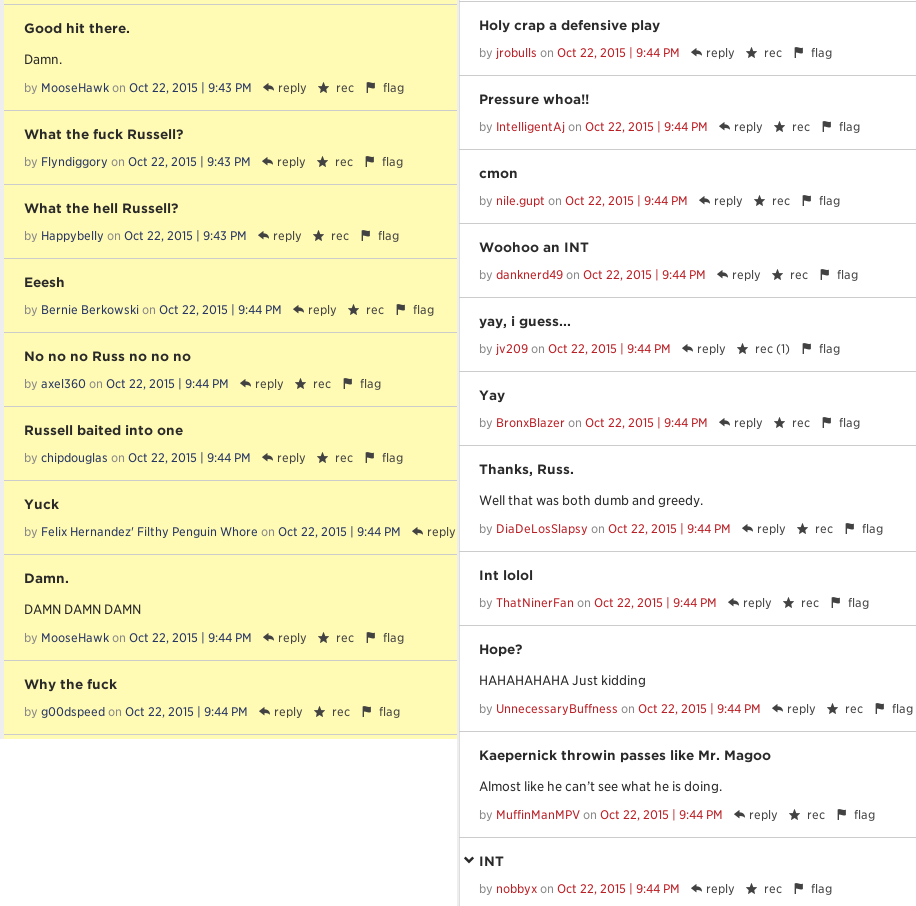 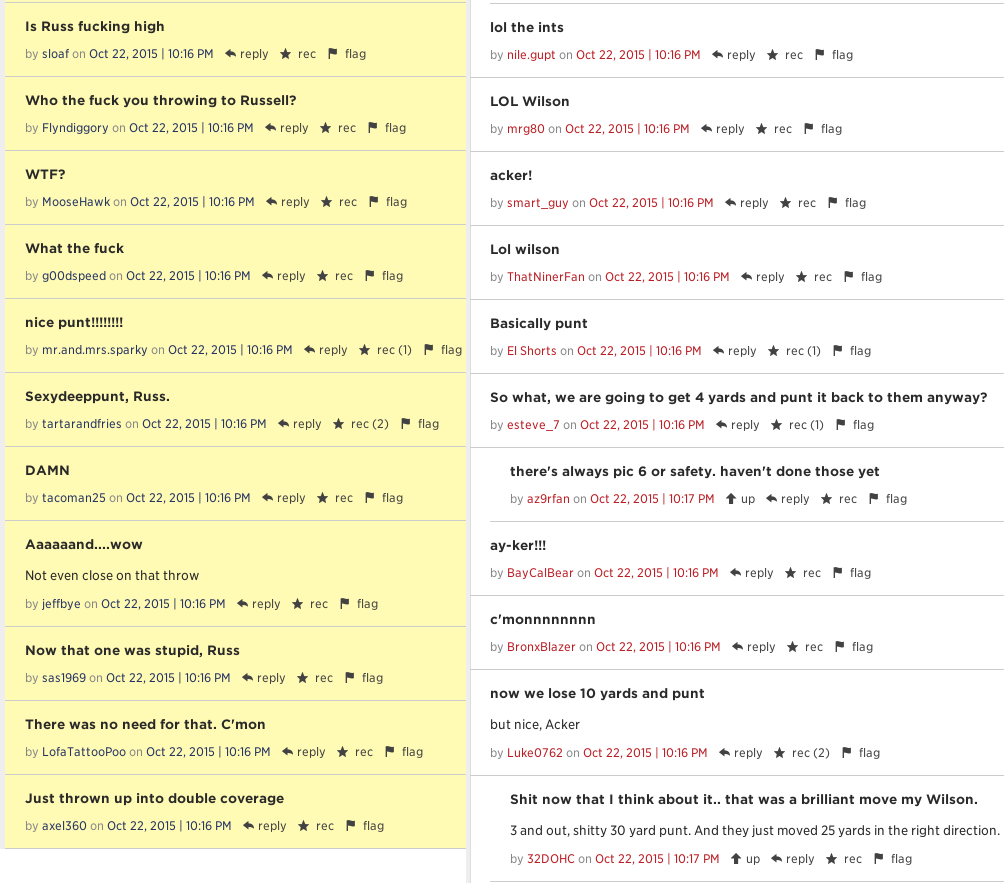 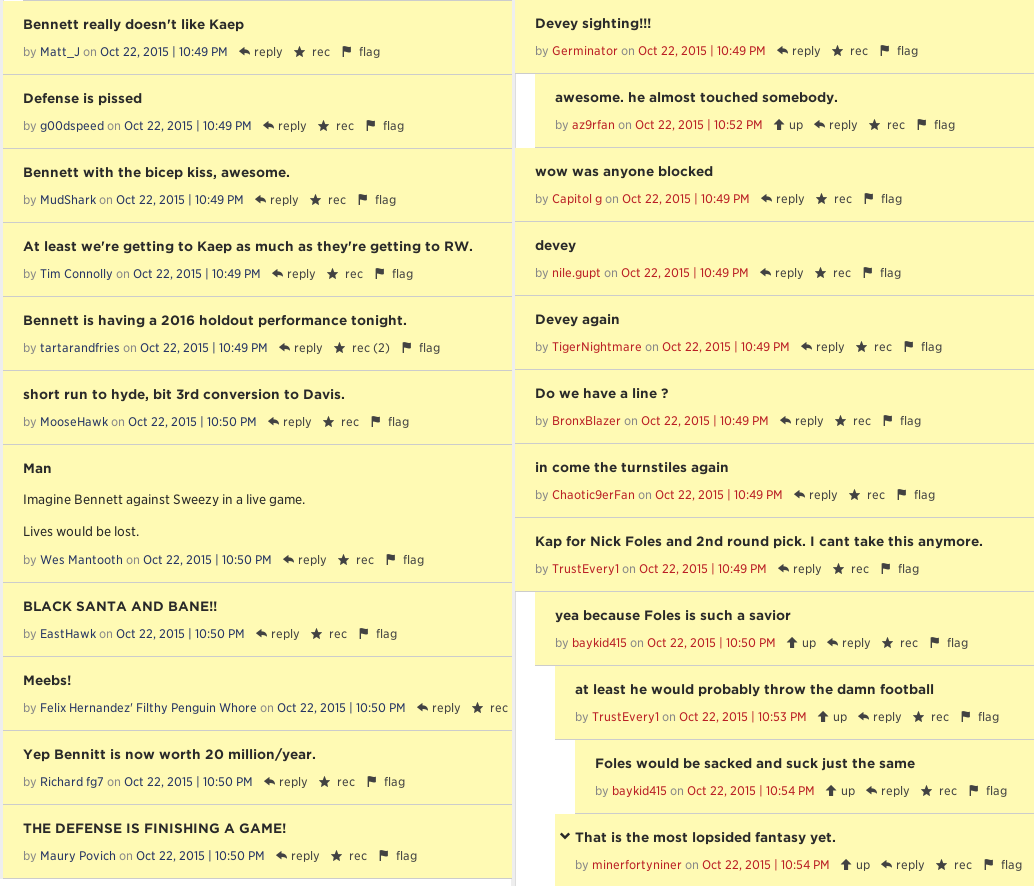 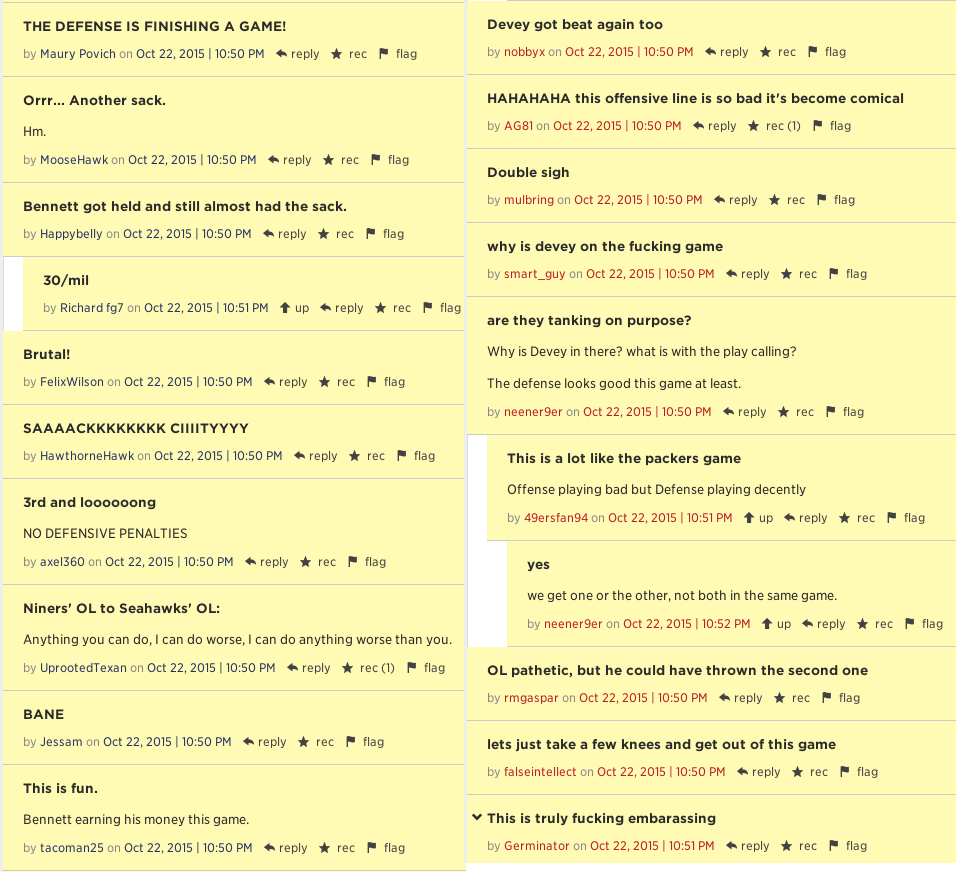 Ricardo Lockette doesn't get penalty called on him, Quinton Patton does instead (20-3 SEA) 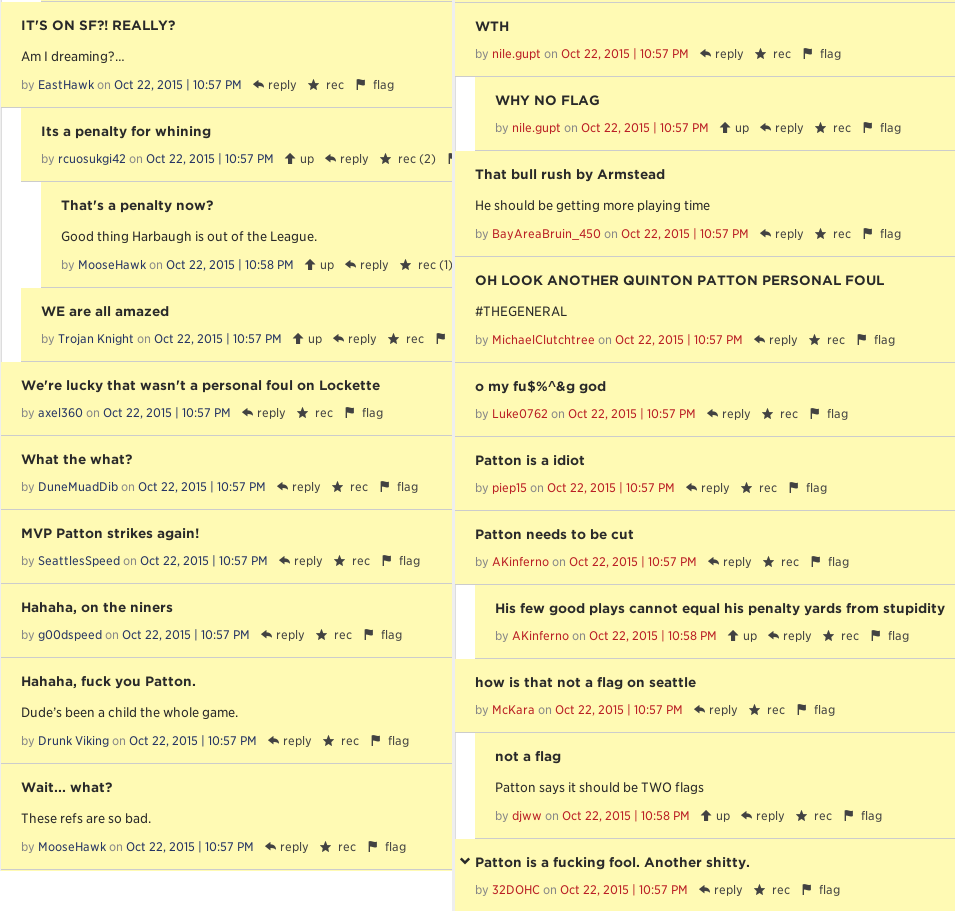 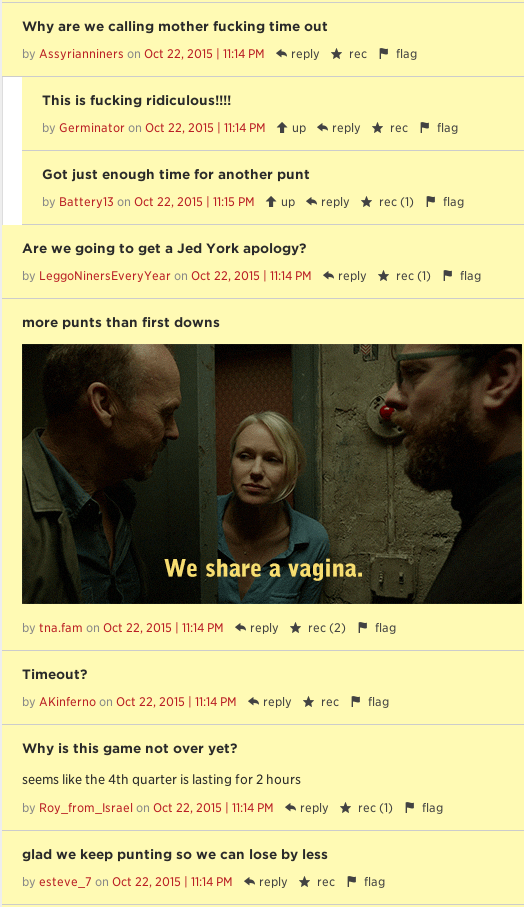 The San Francisco 49ers' two game flirtation as a bona fide NFL entity came to a screeching halt Thursday night as the Seattle Seahawks pounded them into oblivion, ravaged their village, stole their manhood, ran off with their wives, and posted it all on Youtube with a thunderous laugh track.

Tomsula finally broke from his season long "own it, fix it, and move on" mantra and said he was miffed. Maybe this butt-licking, back-stabbing, ownership-groveling tool is going to actually yell at the players today, like a real NFL coach might do. Watch out, Jimmy T., the whole locker room might come tumbling down around you.

Unfortunately, you can't fix bad players. Or bad coaching. Or front office bunglers. Not this year. And maybe not for a long, long time. -

Post-Game: The 49ers are not a good team

These 49ers are not a good team.

These 49ers always were, at best, a rebuilding team with a pipe dream of sneaking into the playoff race thanks to NFL parity.

If everything had gone swimmingly, they might have ended up in the wild-card hunt late in the season. But nothing is going well, which was always more likely than the former.

The roster isn't talented enough. The coaching staff isn't experienced enough. The stadium isn't daunting enough. This franchise is in need of major renovation. The faster the 49ers realize this, the faster they can actually start reconstruction. They can stop patching and start building. - 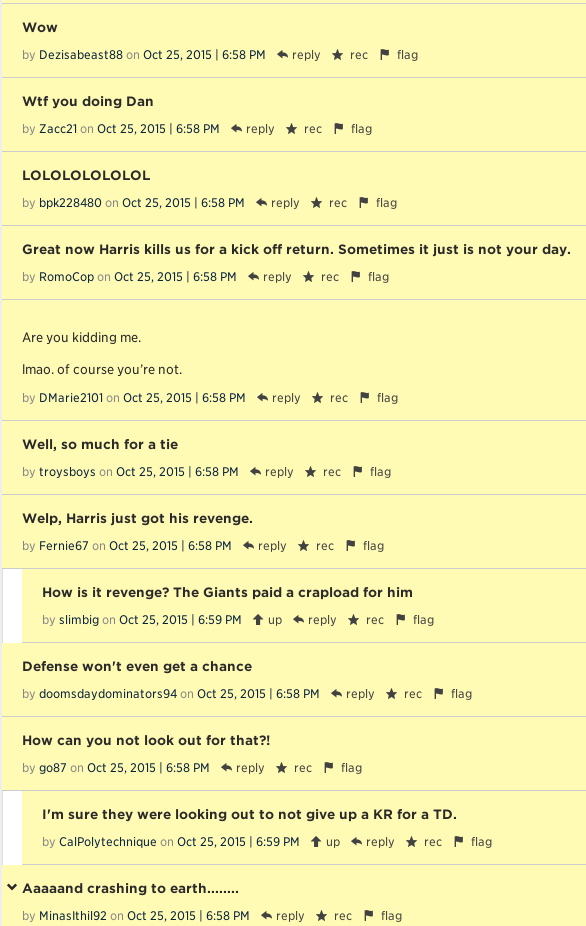 Onward to November, where Seattle has a road trip at Dallas, who lost today to the New York Giants threw a series of awful turnovers, three of which were interceptions thrown by Matt Cassel in Giants territory. They've not won a game since Romo's injury, and even with a healthy Romo, they've never been a strong home team. From there, it's a bye week, followed by THREE home games in a row against the Cardinals, Steelers (with Roethlisberger back), and the 49ers. This month will essentially determine whether or not Seattle is going to the playoffs, and they're getting key players back from the injury list. Let's see if they can once again rally from a slow start and prove to the NFL that they're still one of the best in the league.