I wrote a series of articles last March and April that broke down the attributes to look for when scouting players for the NFL Draft. Here's my take, reloaded, on what attributes and skills you should look for evaluating edge rushers. Obviously, the examples used are players from last year's class.

In preparation for the Draft, I've researched and broken down some of the scouting methodologies that NFL teams use, I've explained how each combine drill translates to the field and I've illustrated some of the terms player reports commonly feature. These segued nicely into my current series breaking down the attributes, tools and skill sets that scouts look for in NFL Draft prospects when evaluating their play in games.

Combine workouts and measureables are excellent benchmarks for athleticism, and at this time of year they're always at the front of our minds. But breaking down tape is the absolute best way to evaluate individual players. It's a complex and highly varied process across scouting departments league-wide, but the evaluation of game film can be boiled down to a simple question, whether you're a personnel executive, a pro scout, a pro draft analyst or an amateur fan at home: 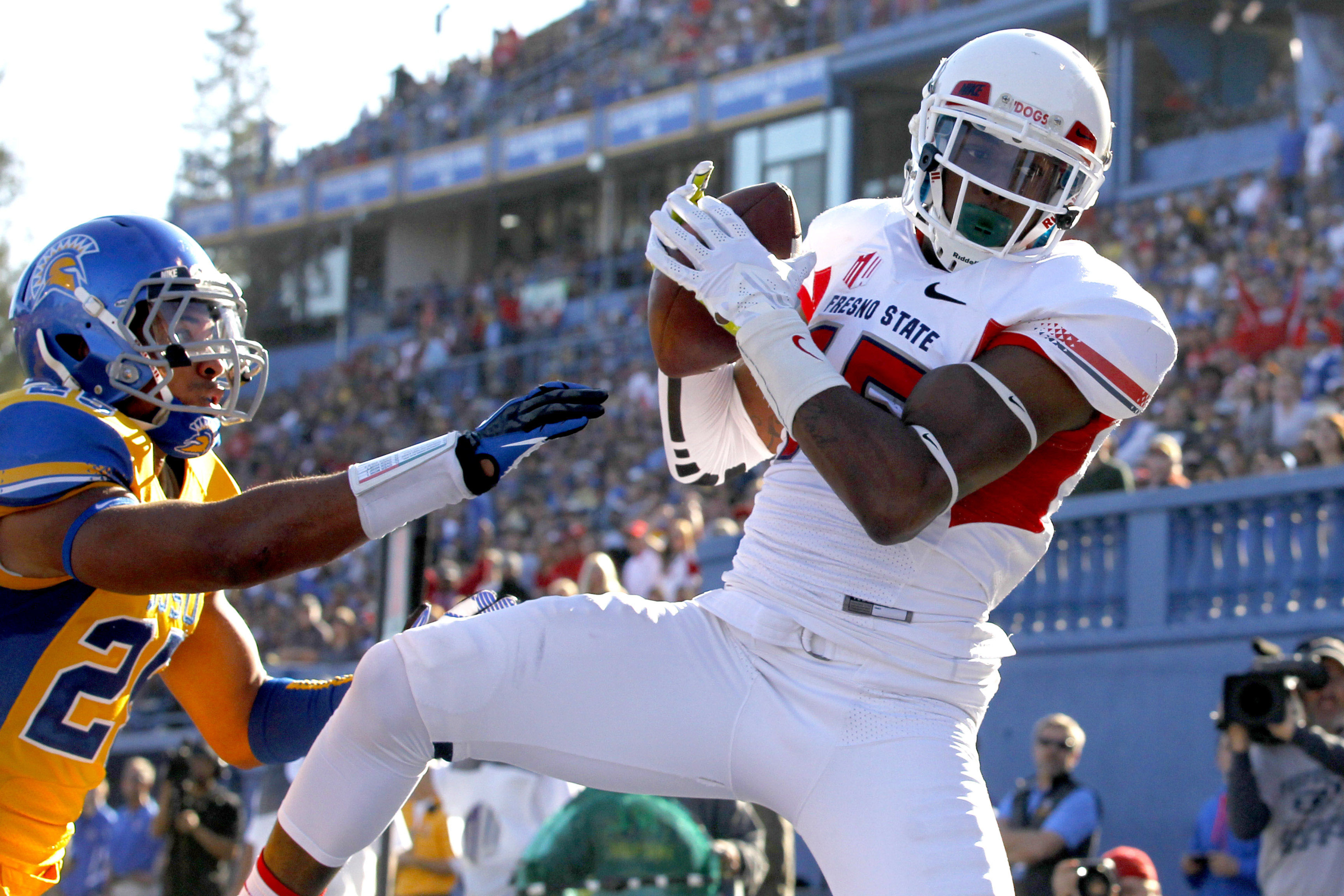 • What to watch when evaluating WR
• How to speak like a scout
• Specialization: The new base defense
• Scouting: Not just throwing darts
• Breaking down the combine
• Behind the Legion of Boom
• Scouting the tweener

I use the term "edge rusher" because with varying schemes and strategies that go along with 3-4 and 4-3 defenses, you could have pass rushers deployed as defensive ends or outside linebackers. There are differences between true 4-3 defensive ends and pure 3-4 outside linebackers (plus some teams have interchangeability with hybrid schemes), and you can get even more specific by designating which side of the line each player projects to, but for the sake of brevity, I'm going to generalize.

So, whether you're projected as a pass-rushing defensive end or outside linebacker, there are certain attributes that personnel executives and scouts look for. Let's break them down.

The first couple of things I look for when watching edge rushers are pure short-area quickness and the innate ability to time the snap and explode out of a two- or three-point stance. Guys who react slowly to the snap or cannot get upfield in a hurry tend not to last long at the highest level. A pass-rushing defensive end must be one of the team's best players and one of its most explosive athletes. That doesn't necessarily mean fastest, but an element of speed and quickness in a short area is vital. Remember, these players are often asked to go up against and get past the opposing team's left tackle, who is traditionally speaking a very high draft pick, elite talent and franchise cornerstone.

Legendary 49ers coach Bill Walsh, in his scouting notes from 1997, stated simply that an edge rusher "must have explosive movement and the ability to cover ground quickly in three to five yards of space. The ability to get your shoulder past the shoulder of the tackle. This makes for a pass rusher. With that there is quickness because it sets up a lot of other things."

Watch a prospect to see if he's often the first player out of his stance at the snap. If he's often one of the last on his line to move forward out of his stance, that's a huge red flag. Can he cross his opponent's face to get around them on the edge? How quickly can he get up to speed?

Of course, exploding up and out of a stance is a key variable, but this isn't a linear game. If an edge rusher cannot "bend" the edge and move laterally toward the quarterback, tackles will quickly learn to simply run that end upfield and out of the play.

"These [pass rushers] must have natural gifts, or instincts for dealing with offensive tackles who are up to 100 pounds heavier. Quickness is only part of it. They must know how to use leverage, how to get underneath the larger man's pads and work back toward the quarterback. And he must be strong enough to bounce off blocks and still make the play."

You'll hear scouts talk about bend, which relates some to ankle and knee flexion or flexibility. They're referring to an edge rusher's ability to get low and change direction quickly. Can a rusher dip his shoulders and turn his hips while maintaining balance and full foot contact and traction with the turf? The lower and more parallel to the turf a player can get while maintaining full control, the more leverage he'll be able to generate, and the more power he'll display.

The ability to bend around the corner with excellent flexibility and balance is what separates the greats from the guys who will get past the offensive tackle but then get run right out of the pocket and the play. 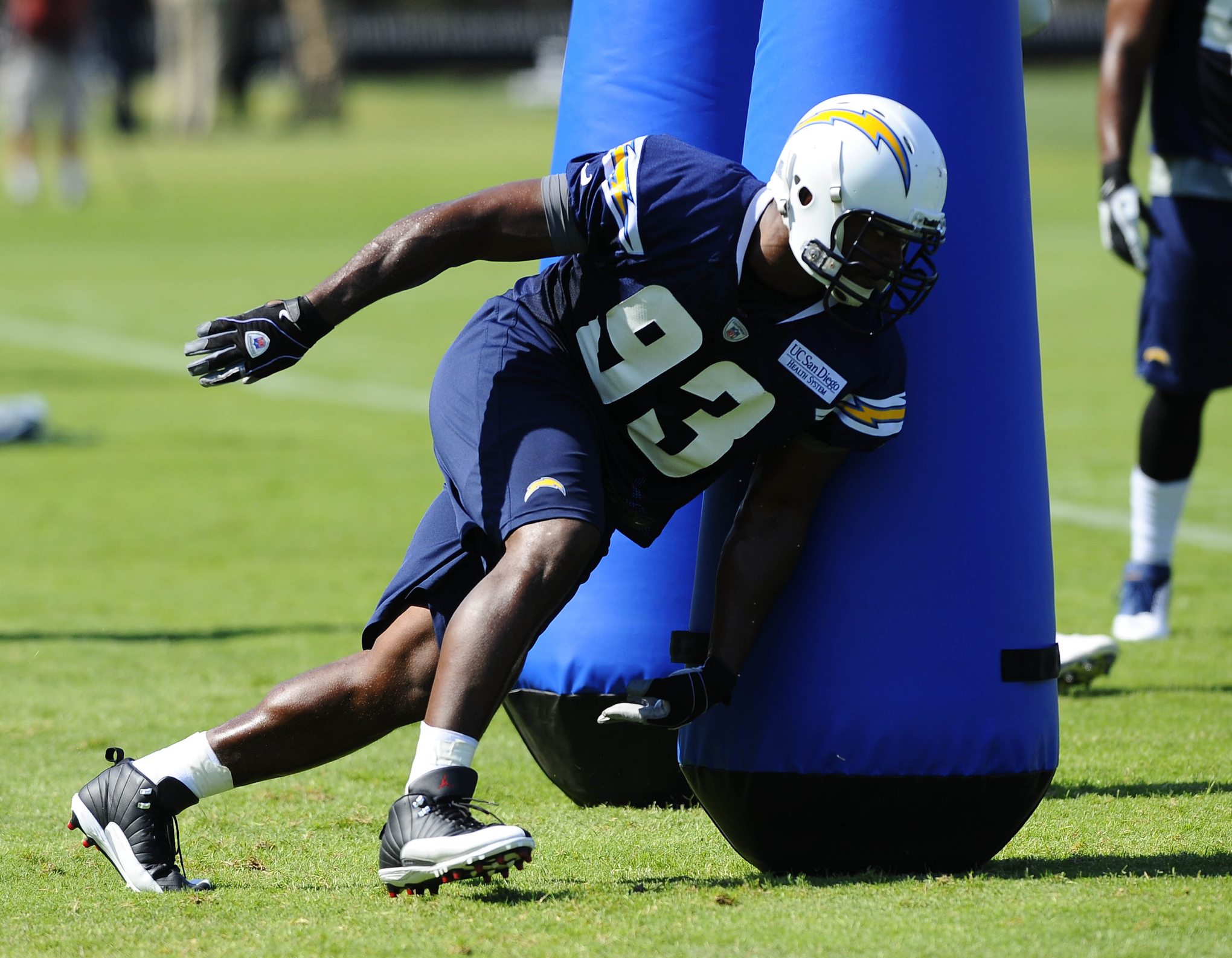 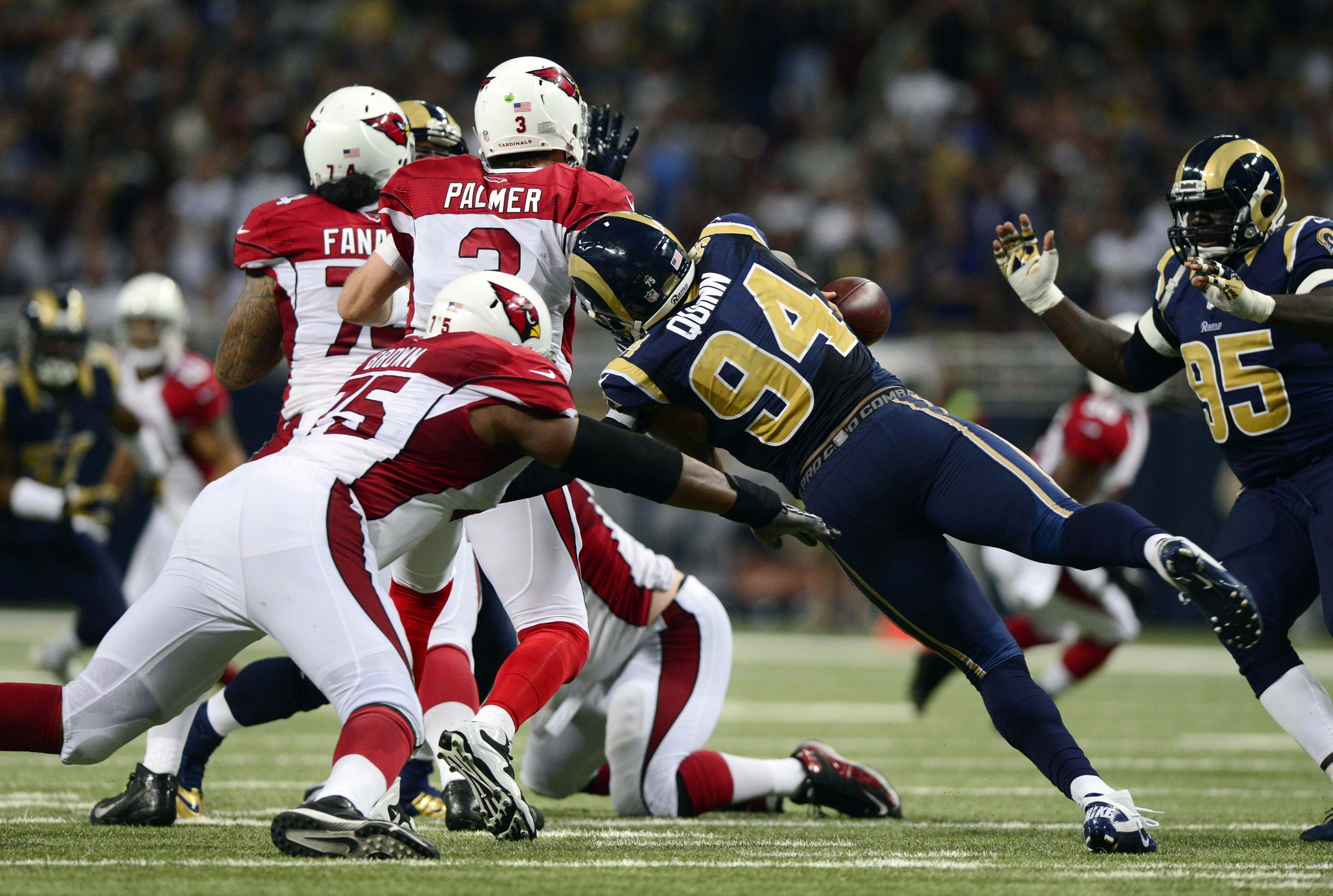 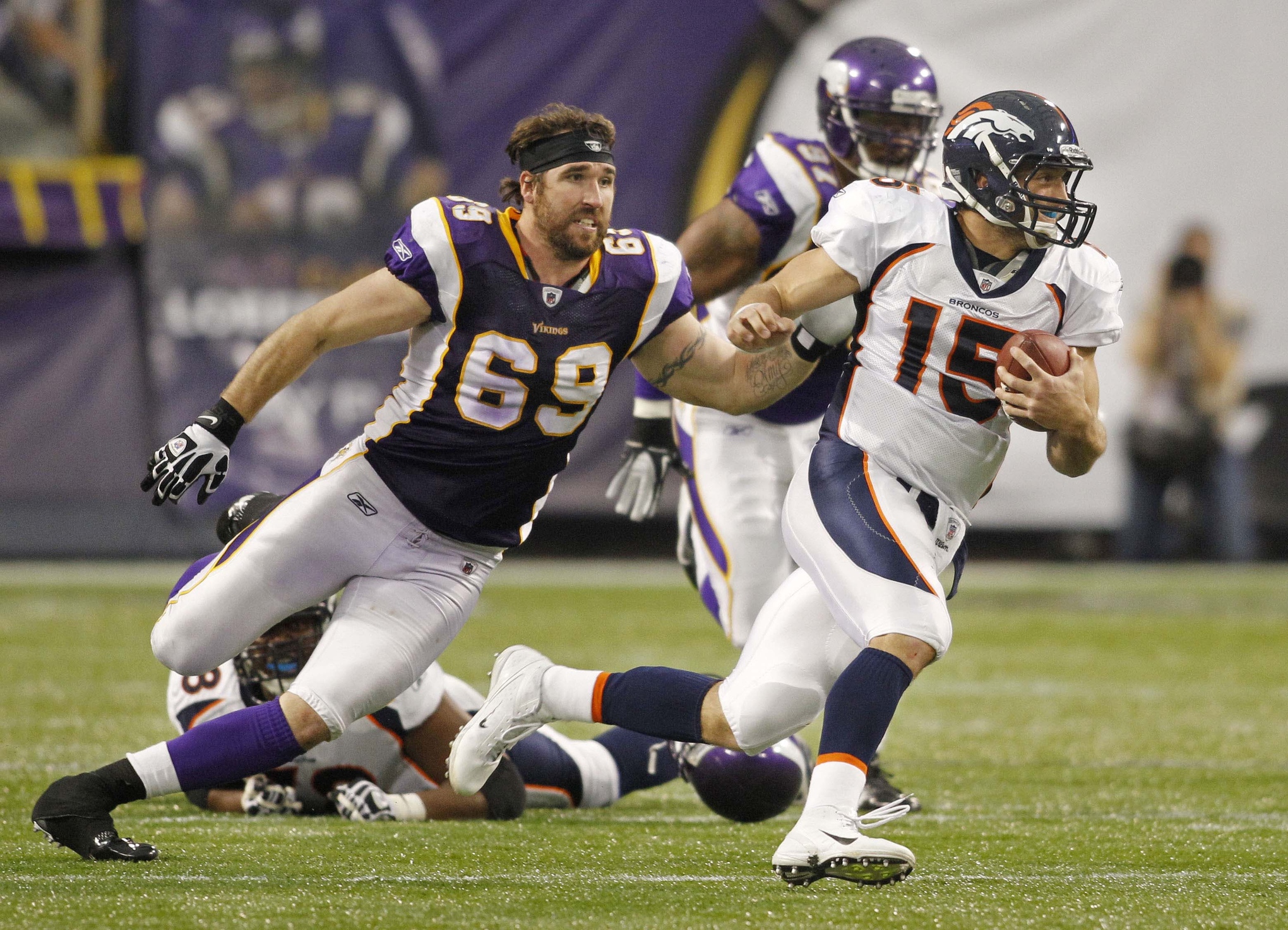 Relatedly, the ability to finish should be observed. Does a prospect frequently bend the edge but then miss a scrambling quarterback? Can he get a hand on the ball carrier but fail to bring him down? It's one thing to force the quarterback to move -- and that's always a good thing -- but it's another altogether to close quickly and with balance and wrangle him down for a sack, particularly with the emergence of the mobile quarterback into more offenses.

Does an edge rusher tackle with force? Does he dislodge the football with power or swipe at the ball to strip it? Does he get too upright after he's free from the tackle? Can he adjust?

In most schemes, edge rushers must possess an element of power.

"Upper body strength, ala Fred Dean, becomes important," said Bill Walsh. "Because you can start one way and when the blocker adapts to your move up the field, then you can arm over him or slug him past as Fred would do, and come underneath him."

This is what's known as a hump move, and it's something every pass rusher must develop. The ability to go right through an offensive tackle is highly desired as well. This is something you'll hear scouts describe as the ability to convert speed to power. An edge rusher will use his quickness and explosive first couple of steps to rock a tackle off balance and then put his hands right into his chest and drive through him.

This is an excellent example from the Super Bowl. Cliff Avril sees a chip block coming his way and converts speed to power to bull rush the right tackle right into Peyton Manning:

"There are those defensive ends who can take a tackle back into the quarterback. They can be just as effective with that as a man who makes spectacular sacks once or twice a game. Something that is not given due credit too often is the player who can take that offensive lineman back to the quarterback. Everybody keeps waiting for the pass rusher to be past somebody and make a move, where in reality you can have an excellent pass rush and not sack anybody. You break his rhythm, force him to move out of the way of his own man."

Repertoire of moves, burst on stunts

In addition to a pure speed rush to the outside and an effective hump move back inside, edge rushers must display (or show an ability to learn) a solid repertoire of moves.

Examples include a spin move, a club move or a swim move. It also helps to show the ability to sneak through gaps and squeeze through the line on stunts and twists with fellow linemen. Aldon Smith is one of the best in the NFL on stunts, and he can plant his foot and get upfield quickly when comboing with his teammate Justin Smith.

Have a plan. The best NFL edge rushers treat the pass rush like a game of chess; in many ways it's akin to pitch selection by an MLB pitcher. You want the tackle to think you're going to rush outside again, but use that to spin move back inside him, or vice versa. Jared Allen became a master of this in his career, and often got stronger and more deadly later into the game when his setup rushes were on the board and in the opponent's head.

Even pure pass rushers will, at times, be asked to drop into space -- buzz the flats or hover over the middle somewhere -- so an ability to move around with fluid athleticism is a plus. Outside linebackers in a 3-4 need this attribute much more than 4-3 defensive ends.

This is more of a subjective attribute, but watch for how comfortable the player looks in space.

Run defense, chase down the line

Like defensive tackles, defensive ends must show the ability to avoid cut blocks on the backside and chase ball carriers down the line. Further, they must be stout at the point of attack when runs go their way, and avoid getting sealed. Most schemes will ask a defensive end or outside linebacker to be the force player -- i.e., turn ball carriers back inside toward the meat of the defense -- so in run plays, an edge rusher must take on a block from a much bigger player, stack them and maintain their gap.

Watch edge rushers take on the run. Do they quickly identify the run? Do they often find themselves out of position or allowing a run to get outside them? On the backside, do they hustle down the line to take away cutback lanes?

Vision, gets hands in passing lane

Integral to run defense, an edge rusher must be able to quickly diagnose a run. You don't want your defensive end or outside linebacker rushing upfield like a banshee if it will open up a huge running lane on an inside handoff or draw. The ability to diagnose a run comes from an edge rusher's vision; can he do what he's asked to do and still maintain a visual on the football?

In the same vein, when it's a quick throw by the quarterback, does the rush end have the presence of mind to get his hand up and try to bat down the football?

Versatility from both sides

Some pass rushers spend their entire college careers rushing from the same side. At the next level, because of how depth charts shake out and because of changing schemes, the versatility to play from either side -- i.e., put your hand in the ground and rush/bend going to either the left or the right -- is key. Similarly, some college defensive ends must learn to play from a two-point stance and drop back into space.

Said Bill Walsh: "These men are basically the substance of the defensive team. Their ability to put pressure on the quarterback is a focal part of defense."

The elite pass rusher is the premium position on the defensive side of the football and they're paid as such. There's a laundry list of skills and attributes necessary to play the position, so I won't pretend this list of skills and tools to evaluate when watching college edge rush prospects is complete nor authoritative. When I set out to write it, I hoped that it would generate some discussion in the comments section about priority and weight that different evaluators might give each aspect. Which tools have I missed? Which skills are most important at the position? As with anything in scouting, it's probably subjective.