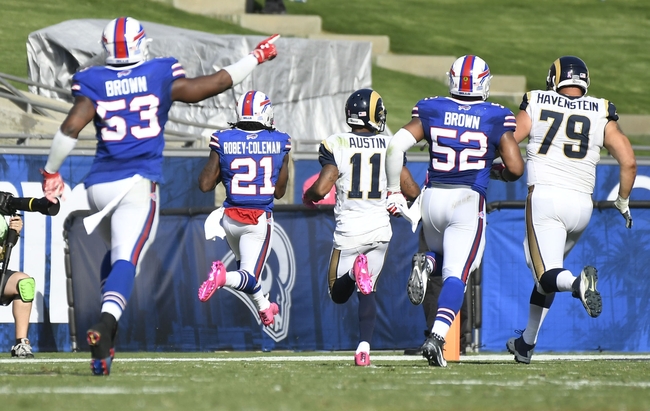 The Seahawks didn't play last week, but that doesn't mean Enemy Reaction has to take the week off. It was another eventful and busy slate of NFL games, and Enemy Reaction is chronicling the best (and worst) moments from week 5. This Enemy Reaction special consists of only game thread screenshots and GIFs, which is honestly the bread-and-butter of this series. To make things easier, the home team is always on the left side, whether they're happy or angry or a combination of the two.

We'll be starting off in Santa Clara, where the 49ers continue to be an unmitigated disaster, and finish up in Los Angeles, where the Rams lost to the Bills, giving the Seahawks sole possession of 1st place in the NFC West. Actually check that, we'll end this in Charlotte, where the Panthers dropped to 1-4 in comically bad fashion, all but assuring us that Panthers at Seahawks won't be on Sunday Night Football anymore.

We're also be looking at how the Falcons beat Denver, the Chargers blew another game, the Vikings improved to 5-0, the Eagles lost their first game, Dallas ran over Cincinnati, and even more! Oh, and I even included a highlight from Washington's 70-21 destruction of Oregon.

Enough talk, let's have some fun! 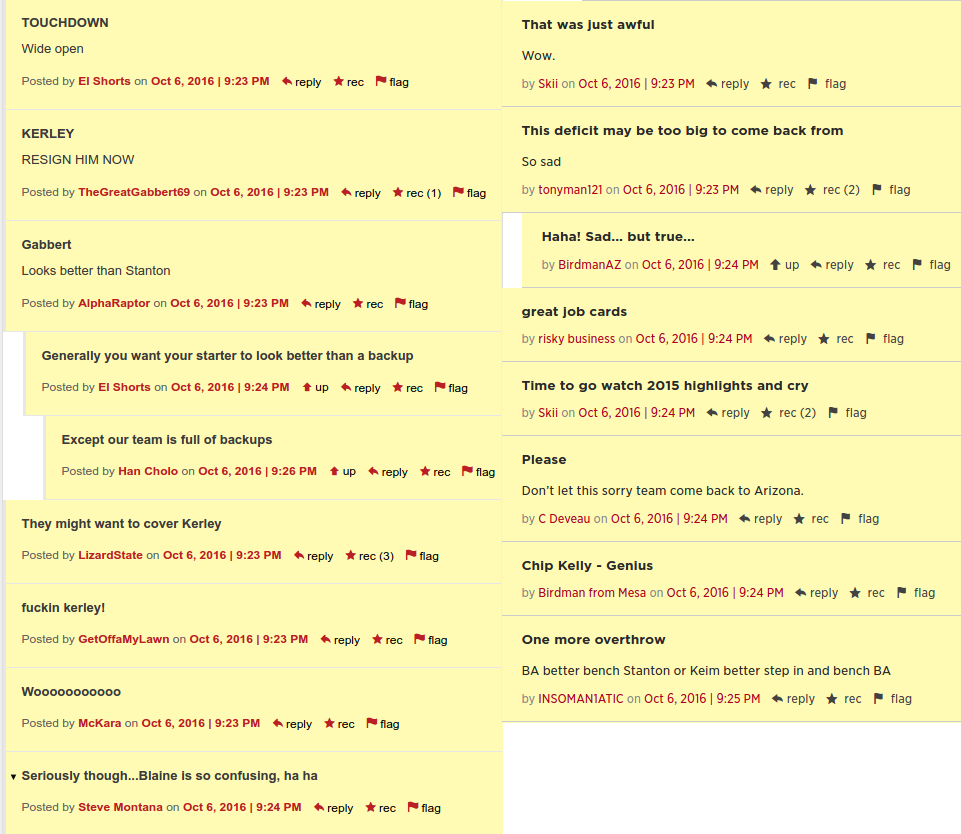 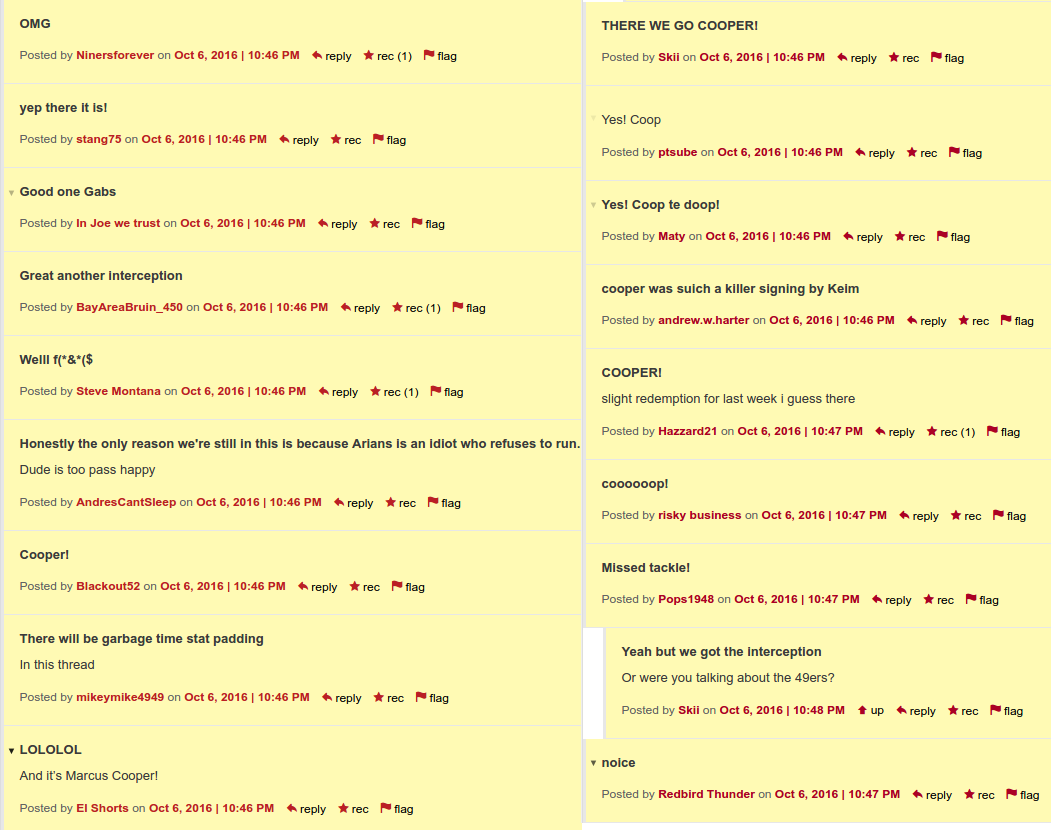 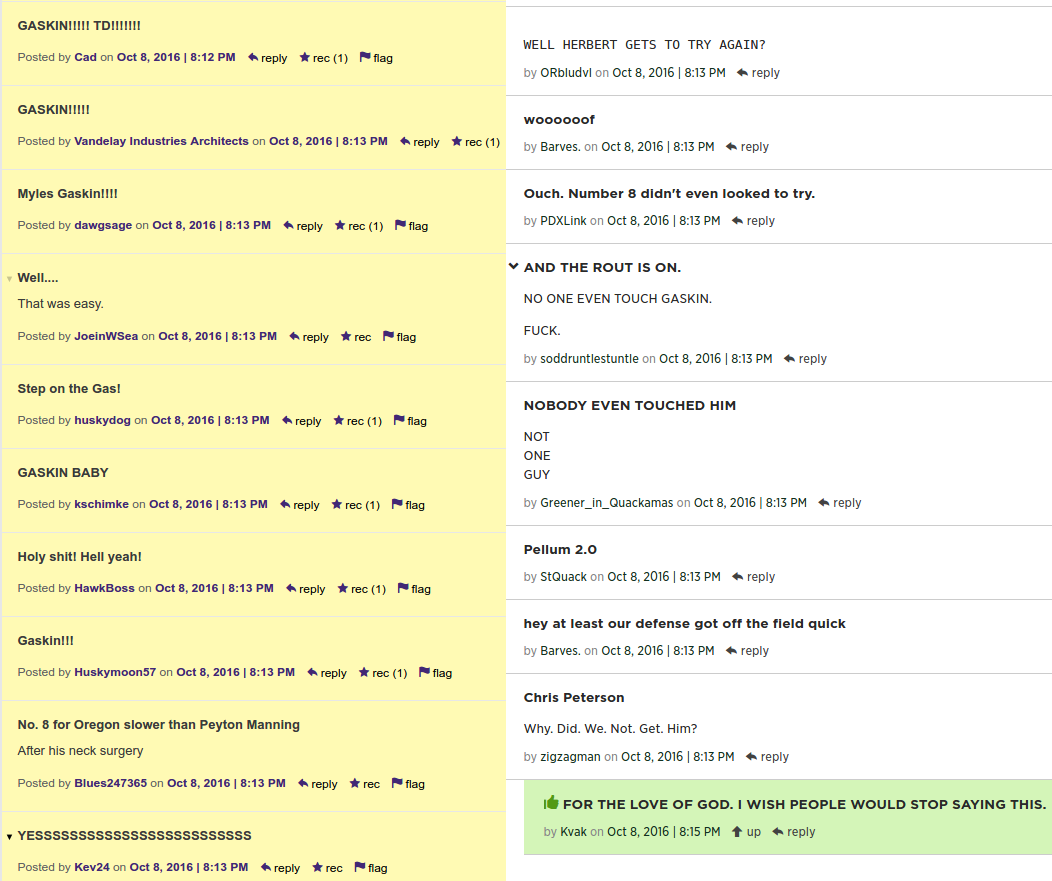 ...Did that Jets defense get any better from last week? Nope. 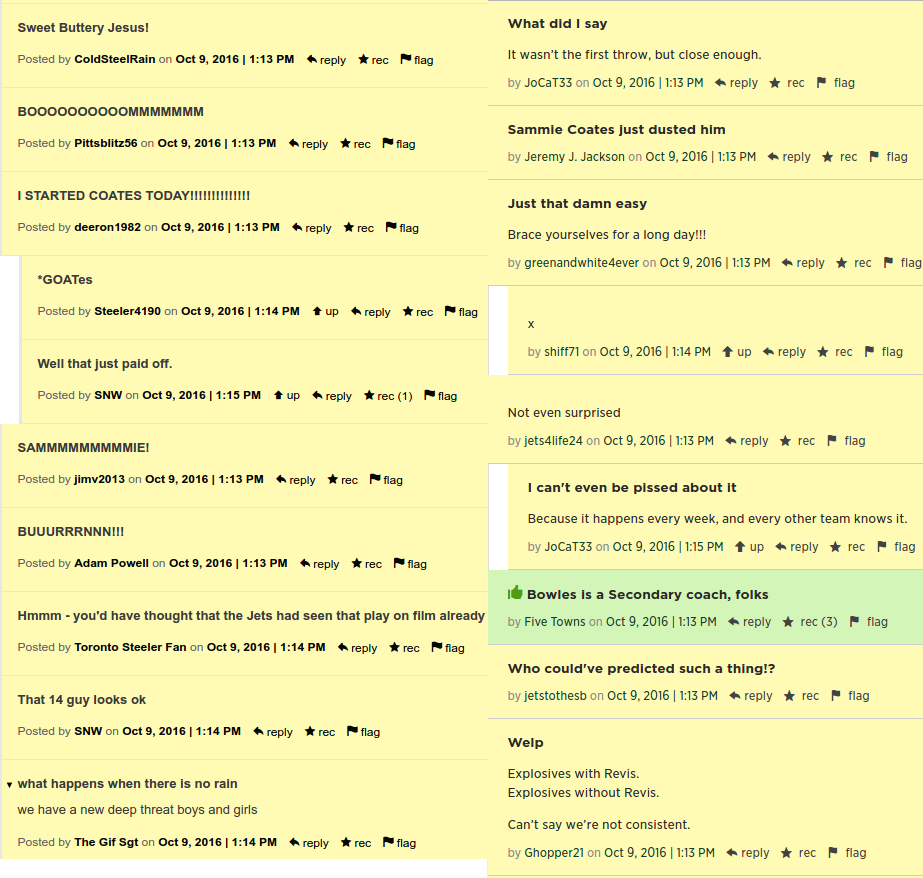 Ryan Mathews fumbles on 3rd down, Detroit recovers and kicks the go-ahead FG 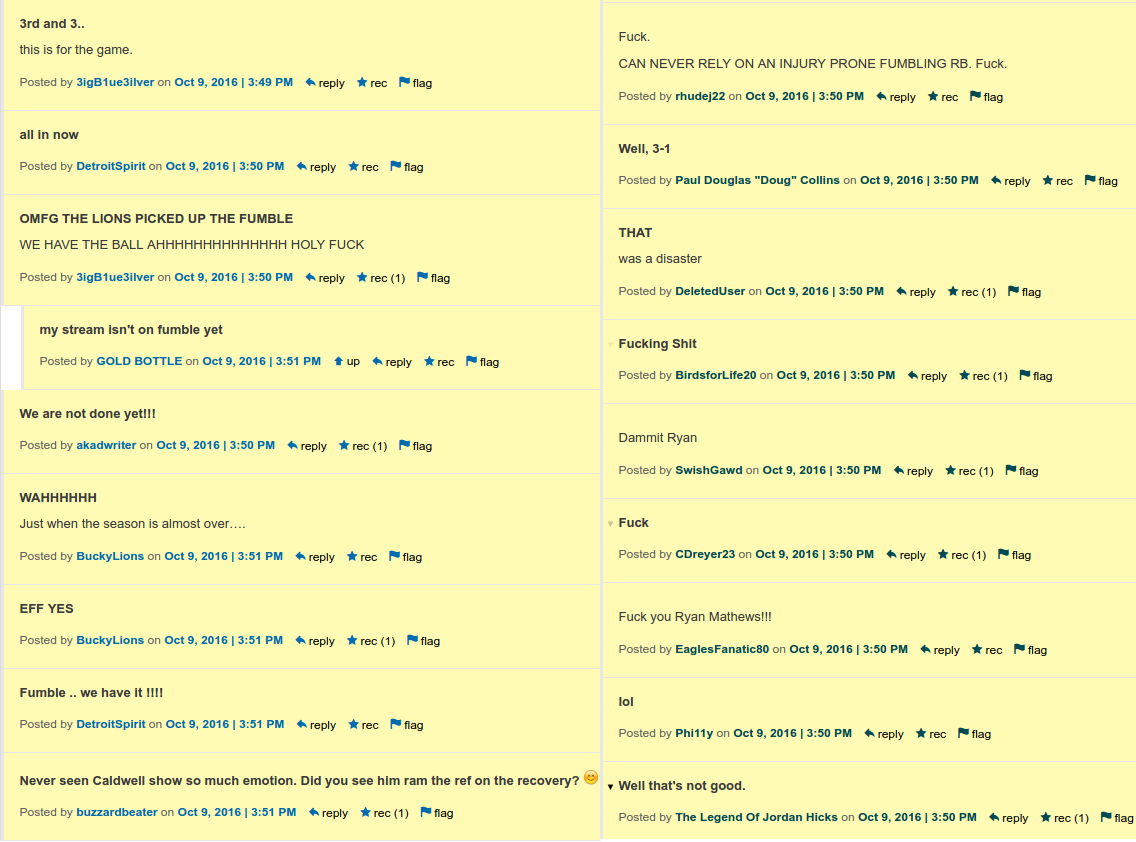 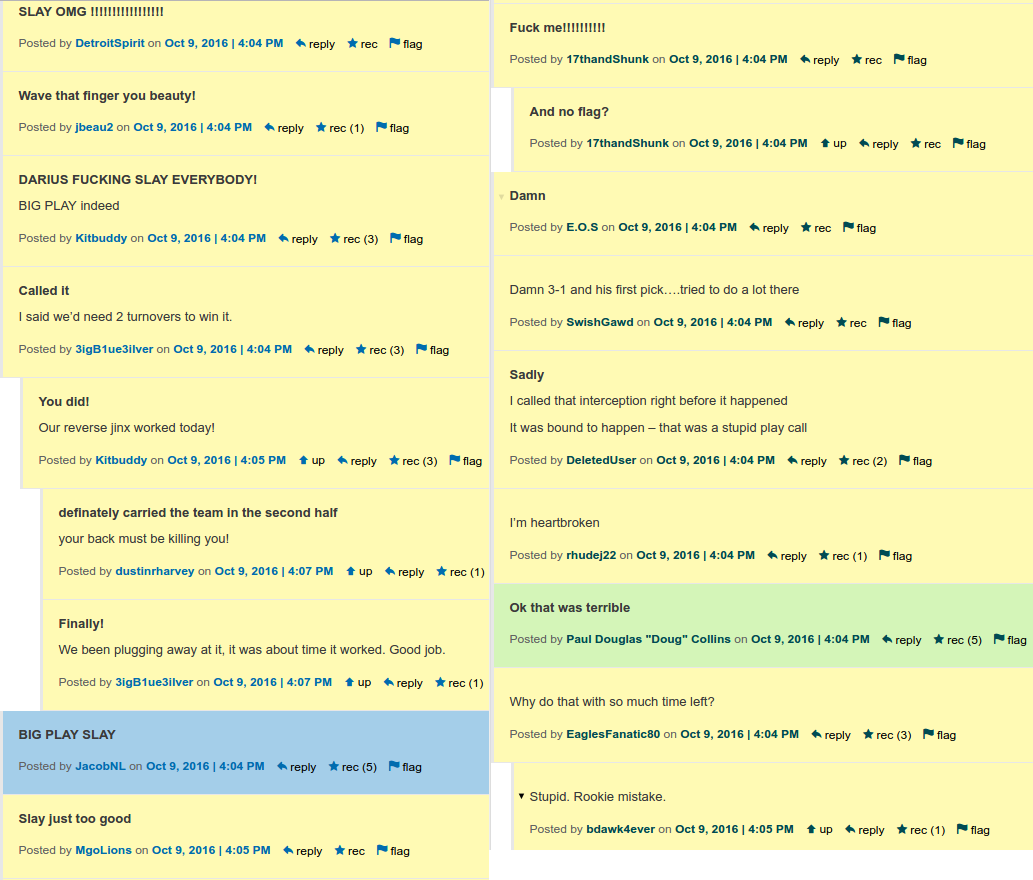 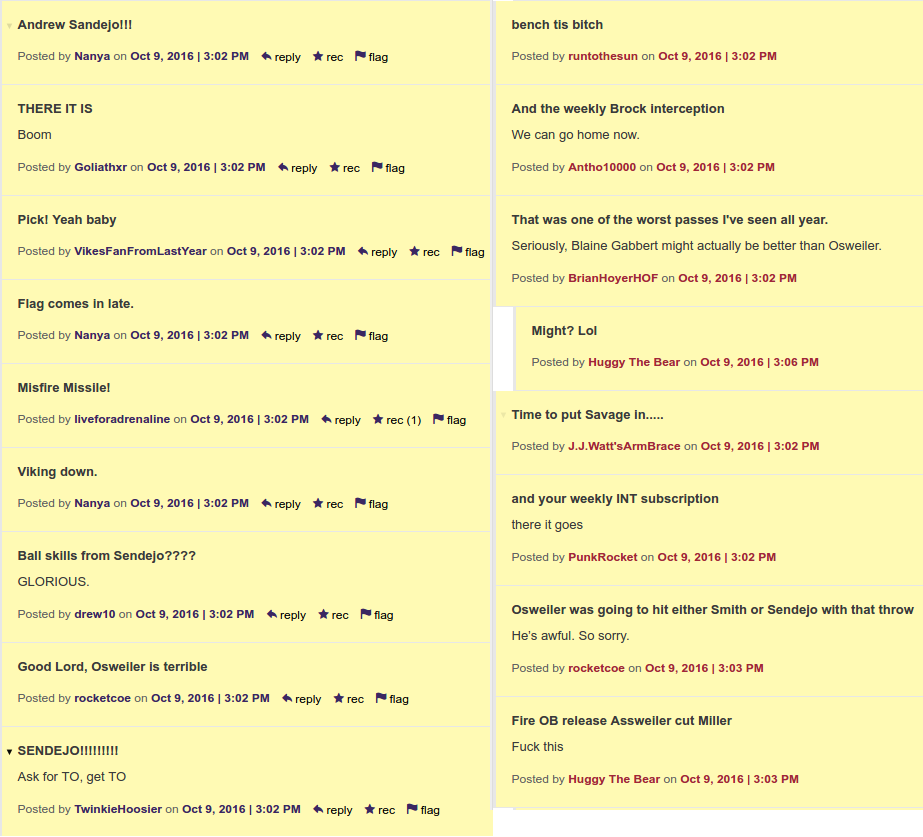 CJ Mosley picks off Kirk Cousins, then fumbles it for a touchback 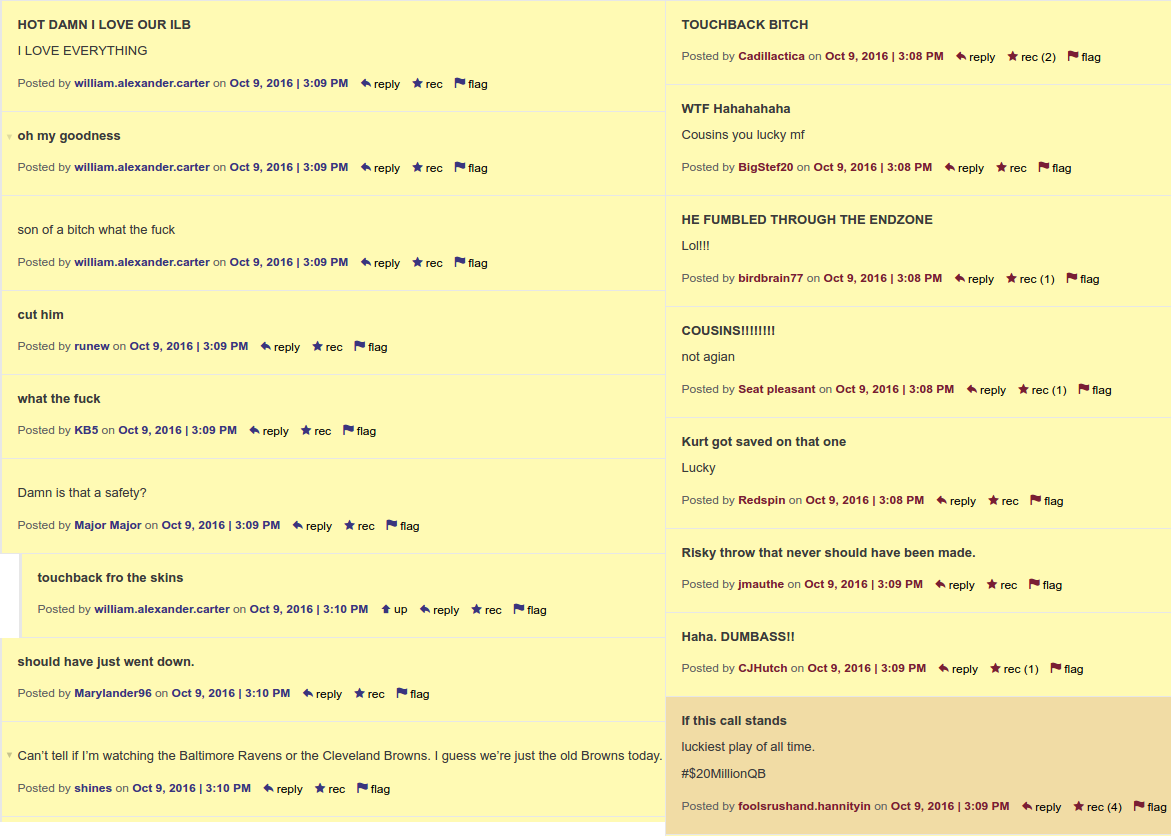 Ezekiel Elliott is quite fast 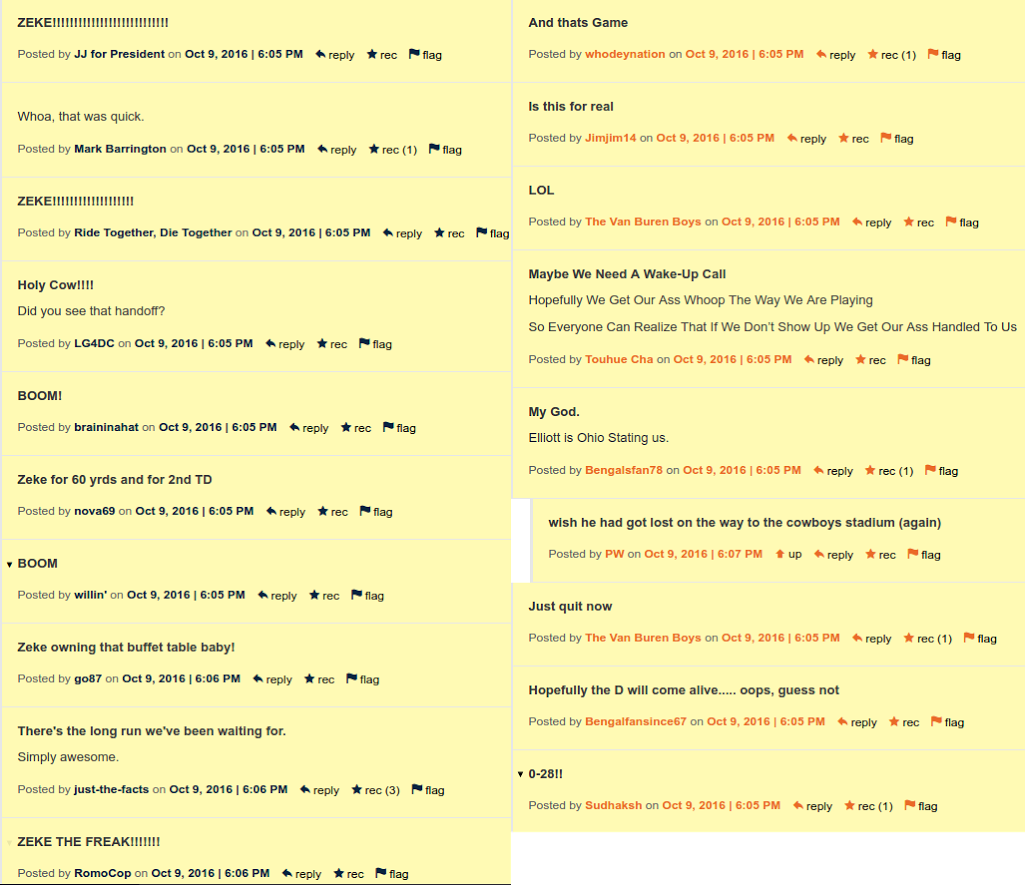 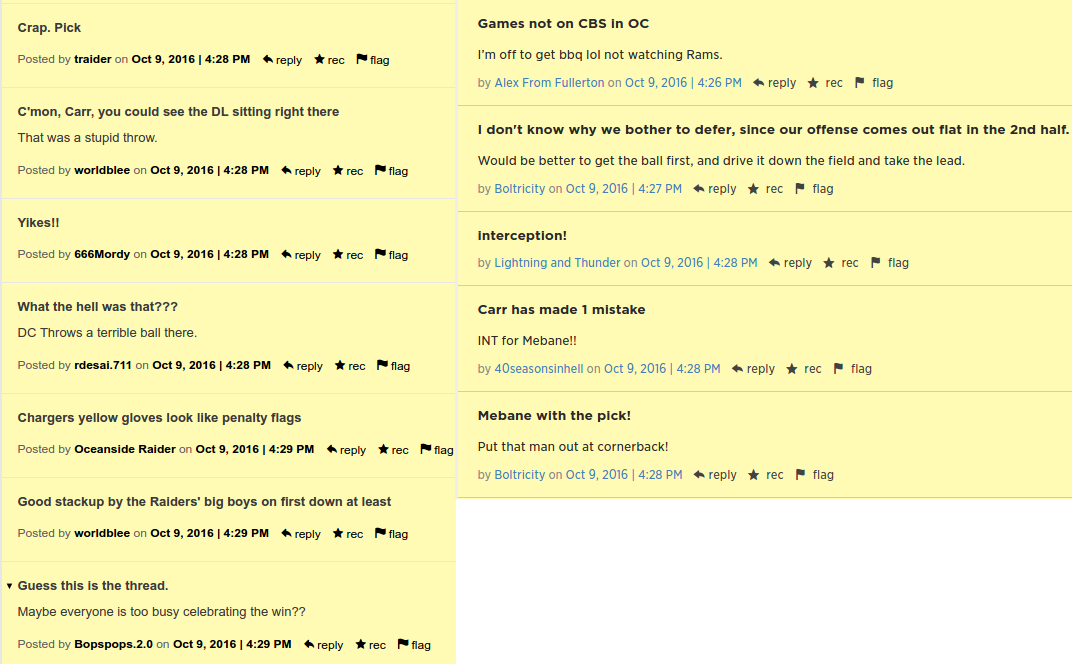 Chargers play for the tie, kick the FG on 4th and inches, proceed to self-destruct 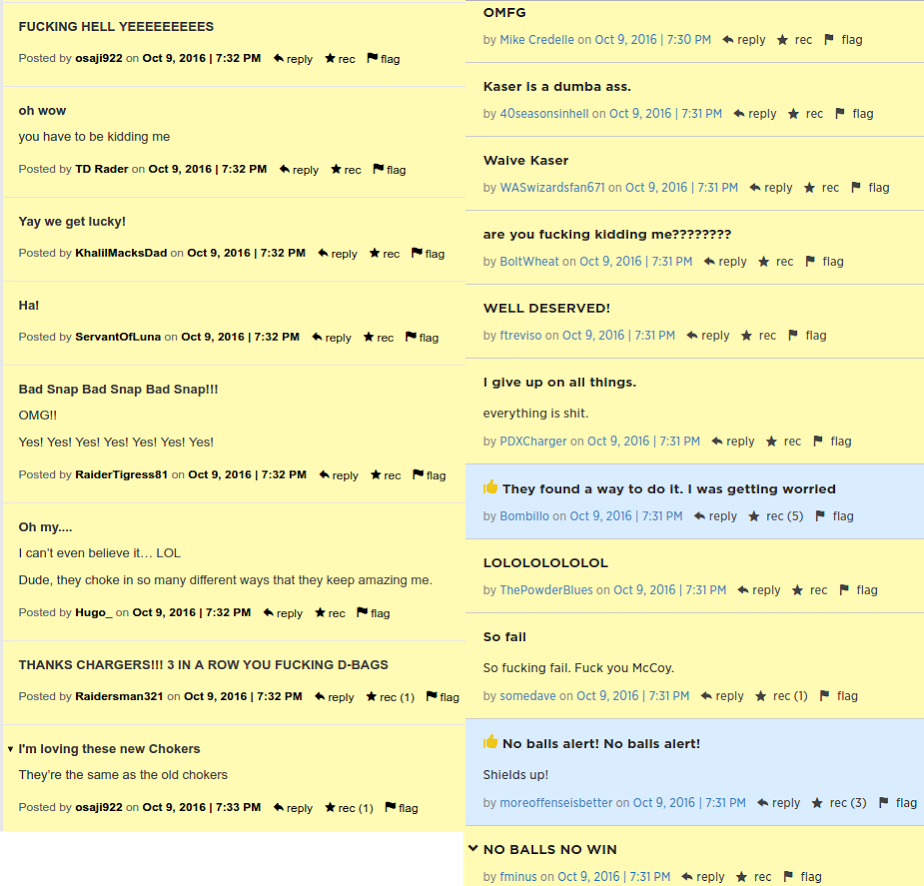 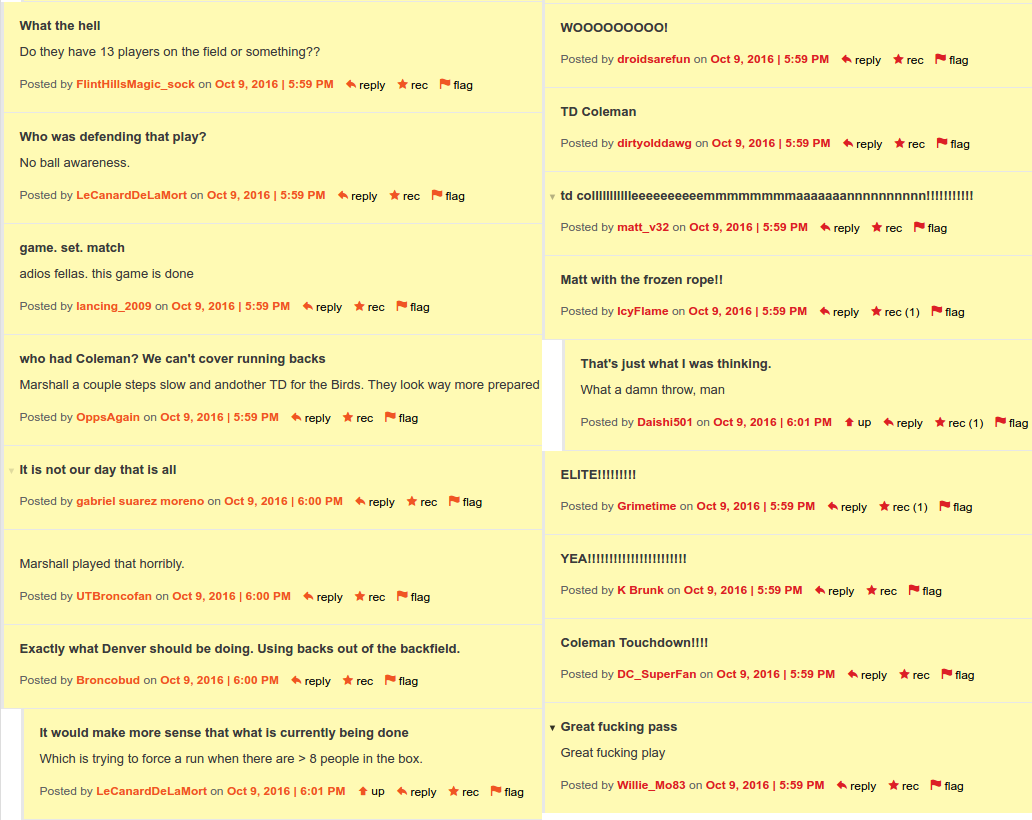 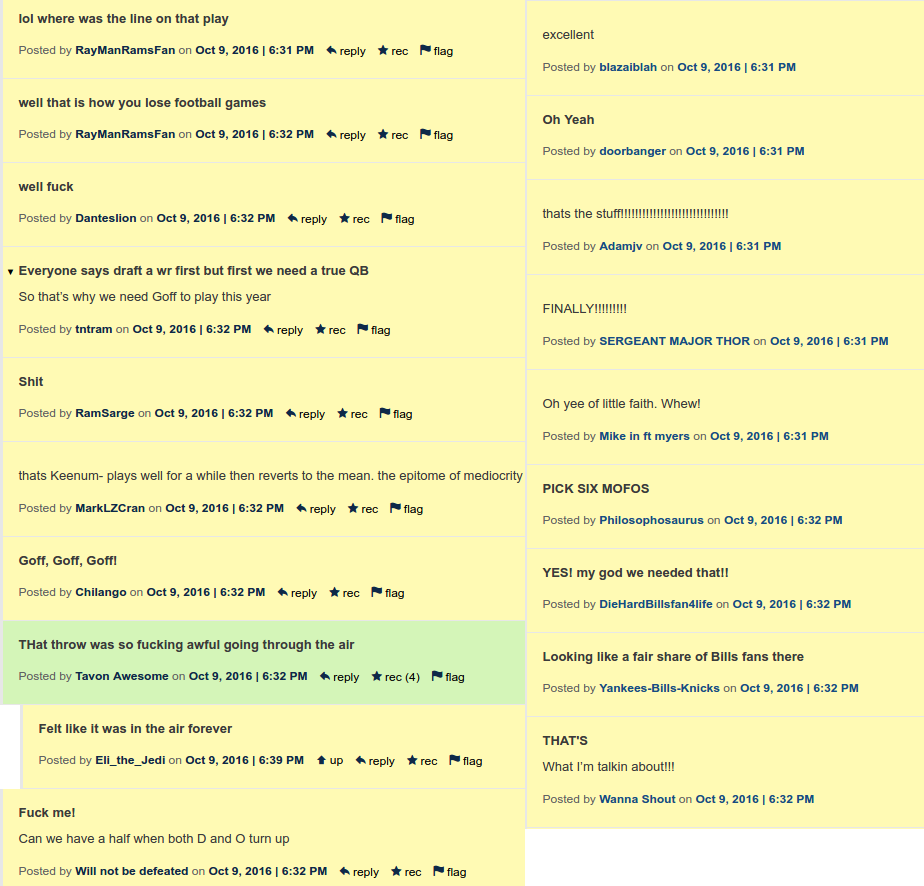 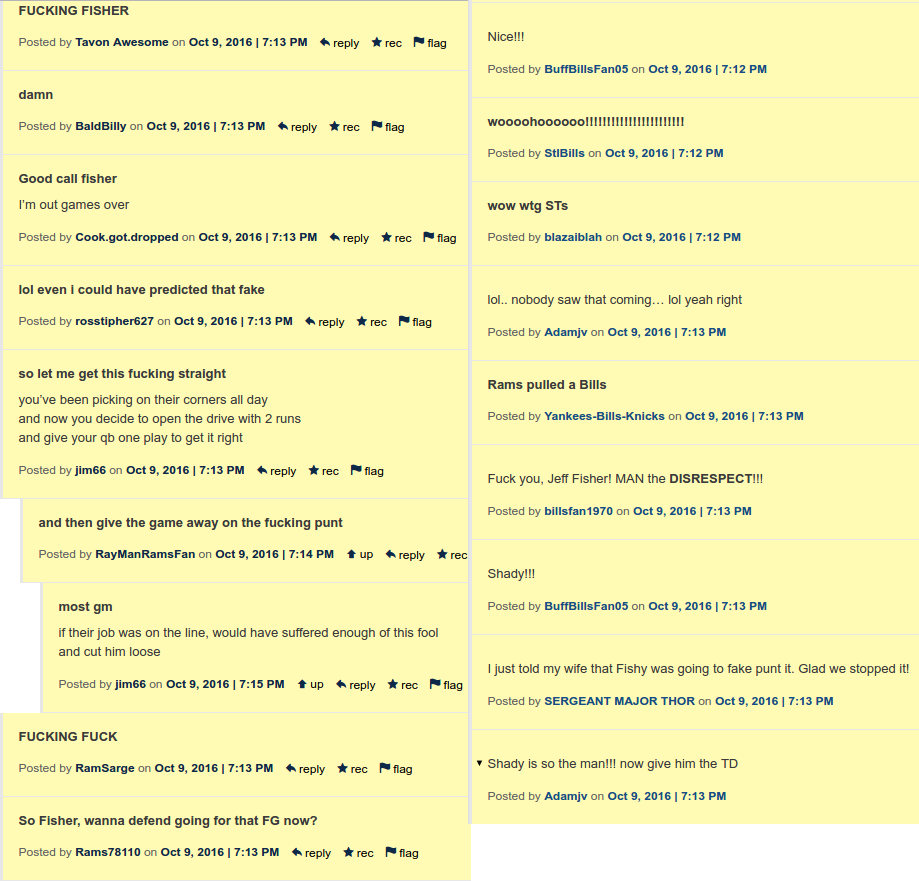 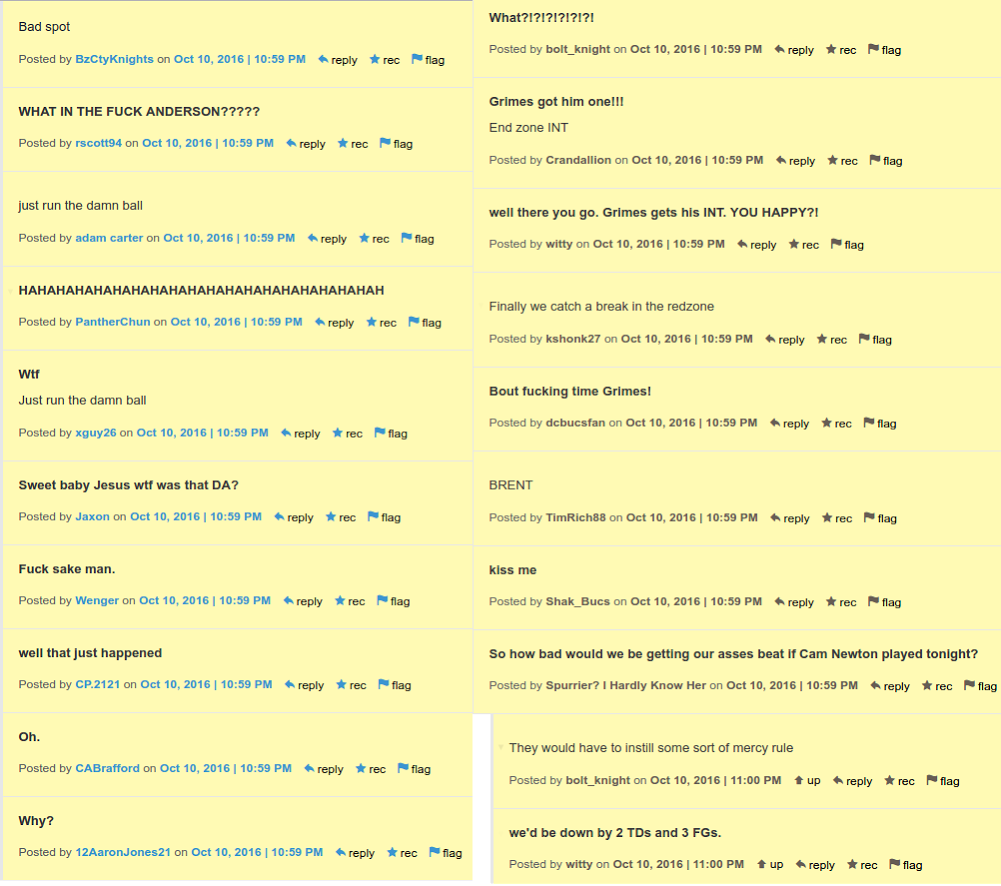 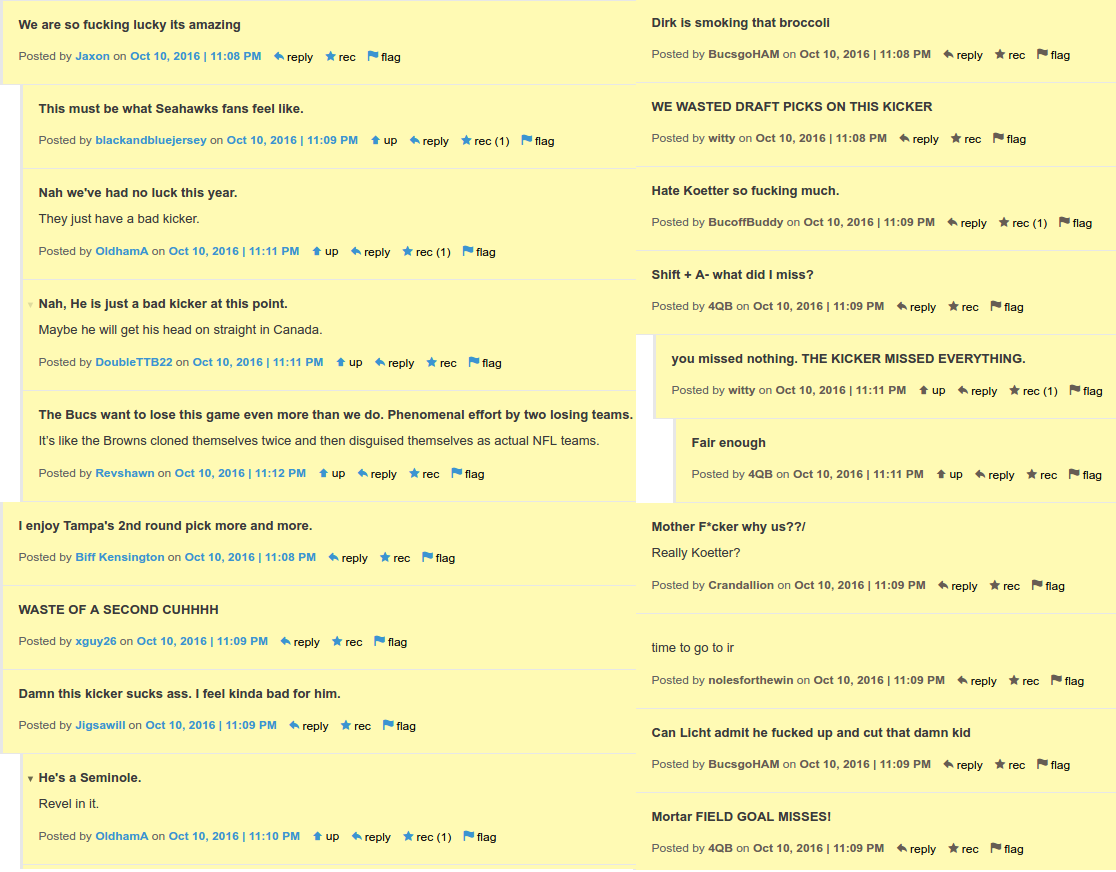 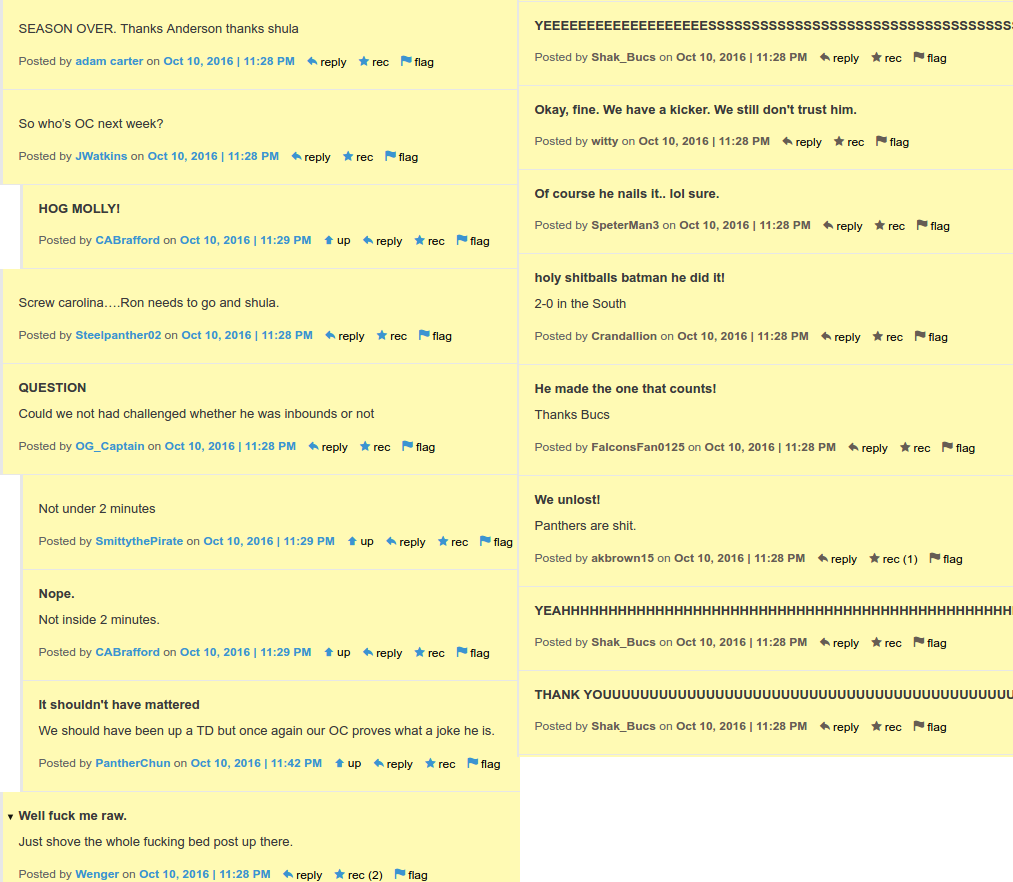 It's Falcons week. Dan Quinn's side is 4-1 and their offense is looking fantastic, both through the air and on the ground. They can really get a firm grip on the NFC South with a win at CenturyLink Field, where Quinn used to roam the sidelines as Seattle's defensive coordinator.

The Seahawks last played Atlanta in the 2013 regular season, hammering the Julio Jones-less team 33-10 at the Georgia Dome, getting a little bit of revenge after the bitter end to the NFC Divisional Round matchup. Atlanta's last two trips to Seattle have ended in wins: a 34-18 blowout in 2010 which otherwise sparked the "Charlie! Charlie! Charlie!" chants, and a 30-28 nailbiter in 2011, with Steven Hauschka badly missing a difficult 61-yarder that would've won the game. The last time Seattle beat the Falcons at home was 2005. In that game, Seattle had a 21-0 lead and nearly pissed it away 2004-style, but they held on for a 21-18 victory.

I hope you enjoyed this beefed up bye week Enemy Reaction, and ideally I'll be back with you next week for the Atlanta Falcons edition. Go 'Hawks!