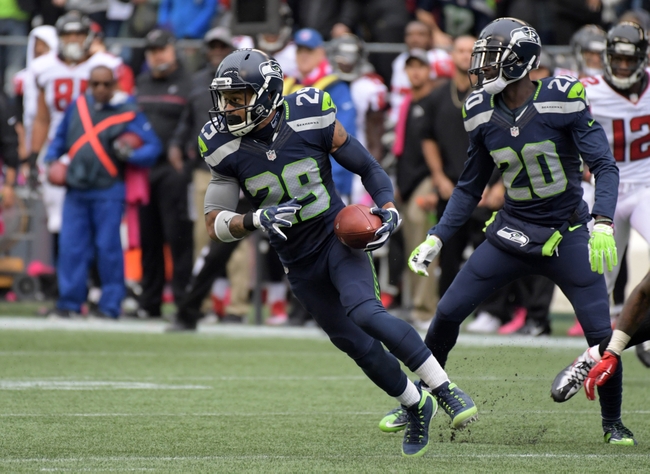 This was a rollercoaster of a game, and I guess we should've expected it. In 2005, the Seahawks hung on after nearly blowing a 21-0 lead. Two years later (admittedly a meaningless game), 38 combined points were scored in the 4th quarter, but Atlanta hung on for the 44-41 win. The 2011 Seahawks rallied from 27-7 down to cut the deficit to 30-28, but that would prove to be the finals core. You know what happened in the 2012 season, so I won't mention it a 2nd time. How did Field Gulls and The Falcoholic react to the game's biggest plays? That's what Enemy Reaction is for, and the Falcons are the main subject for the first time ever.

Earl Thomas is what? 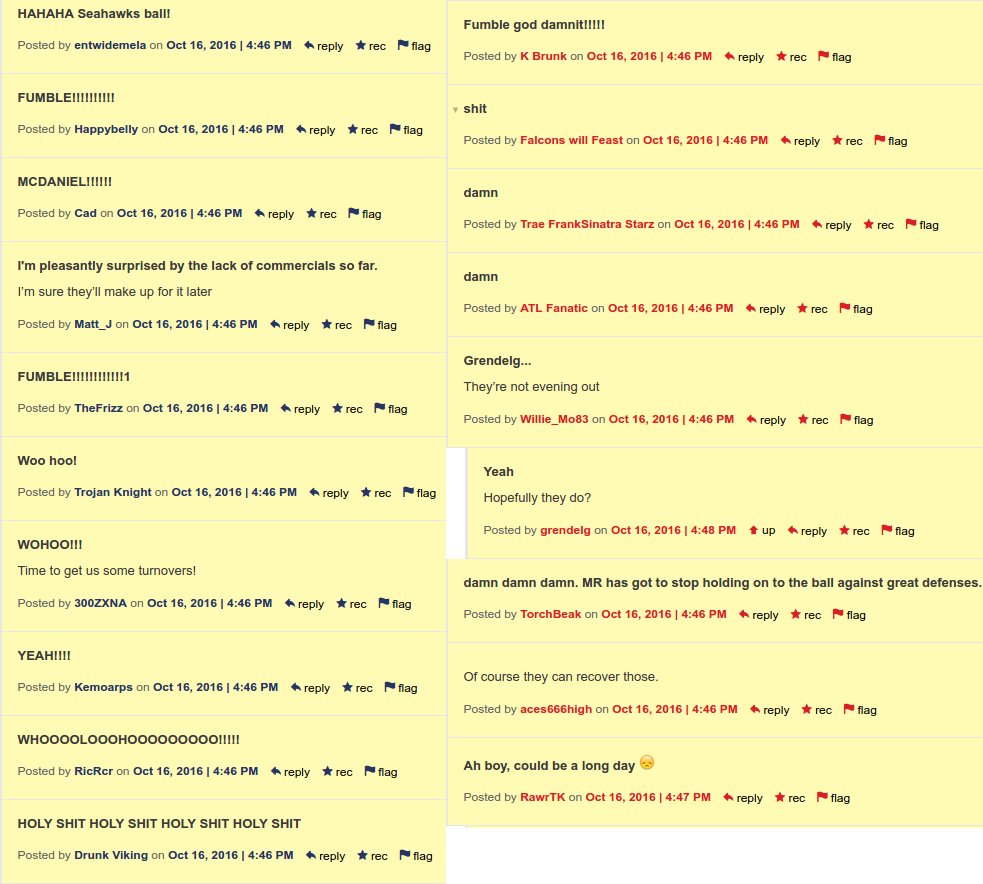 Christine Michael surges ahead for a touchdown (7-0 SEA) 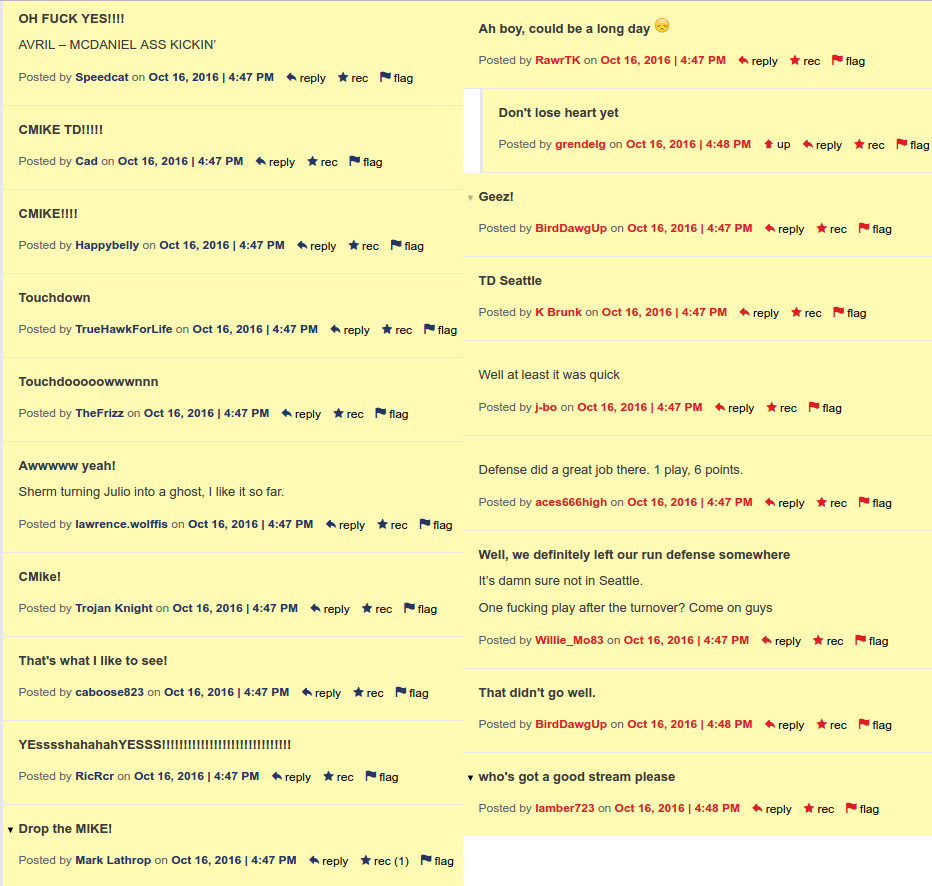 Russell Wilson finds CJ Spiller, Alex Collins then punches it in for a touchdown (14-3 SEA) 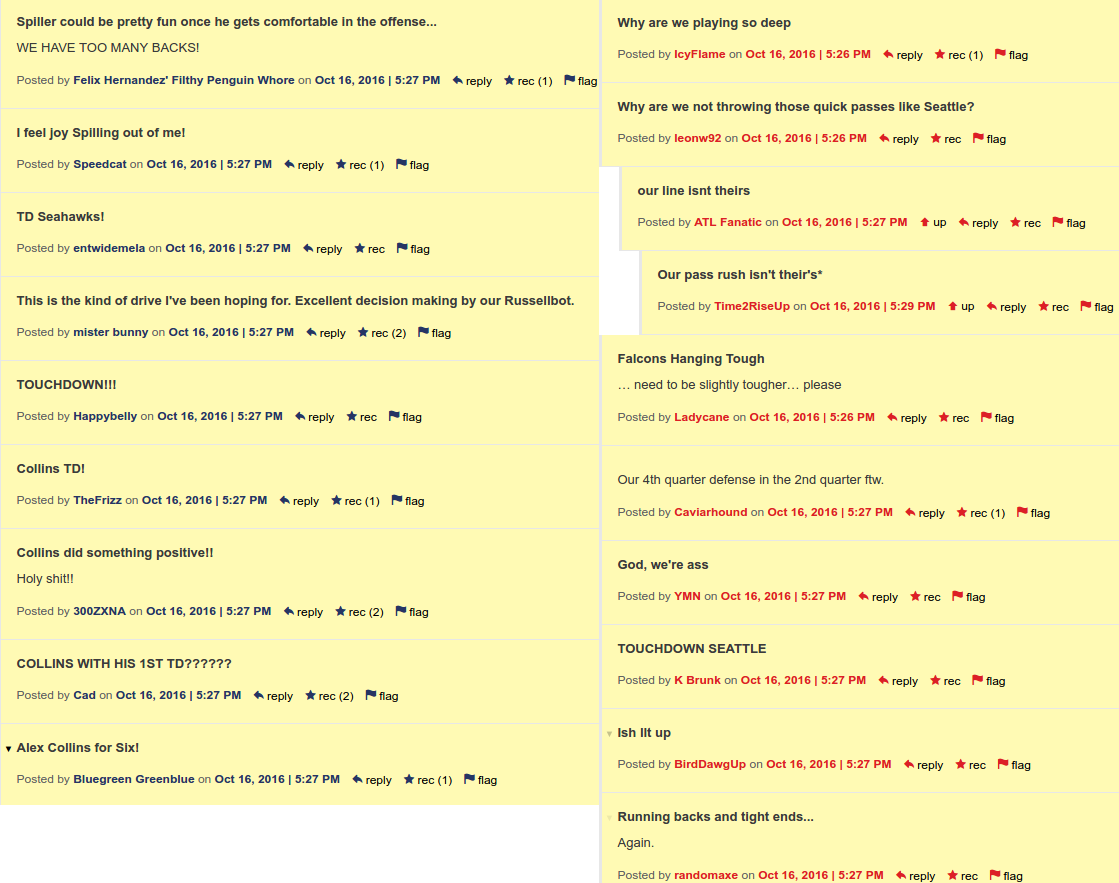 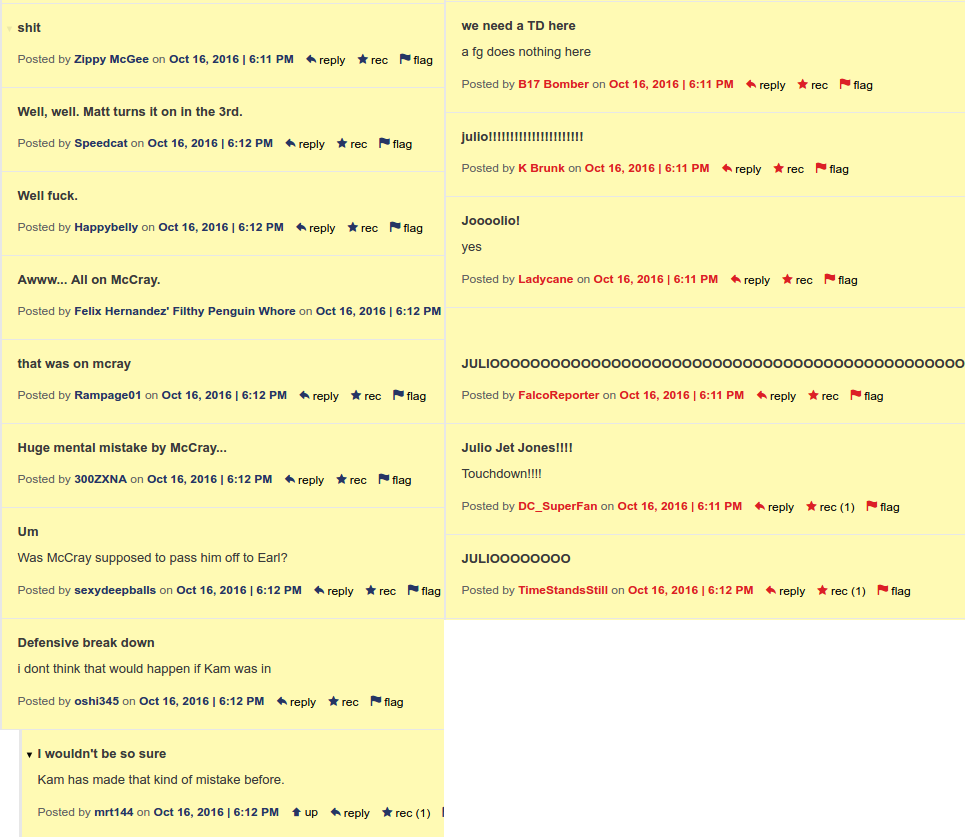 Mohammed Sanu ties the game with a touchdown (17-17) 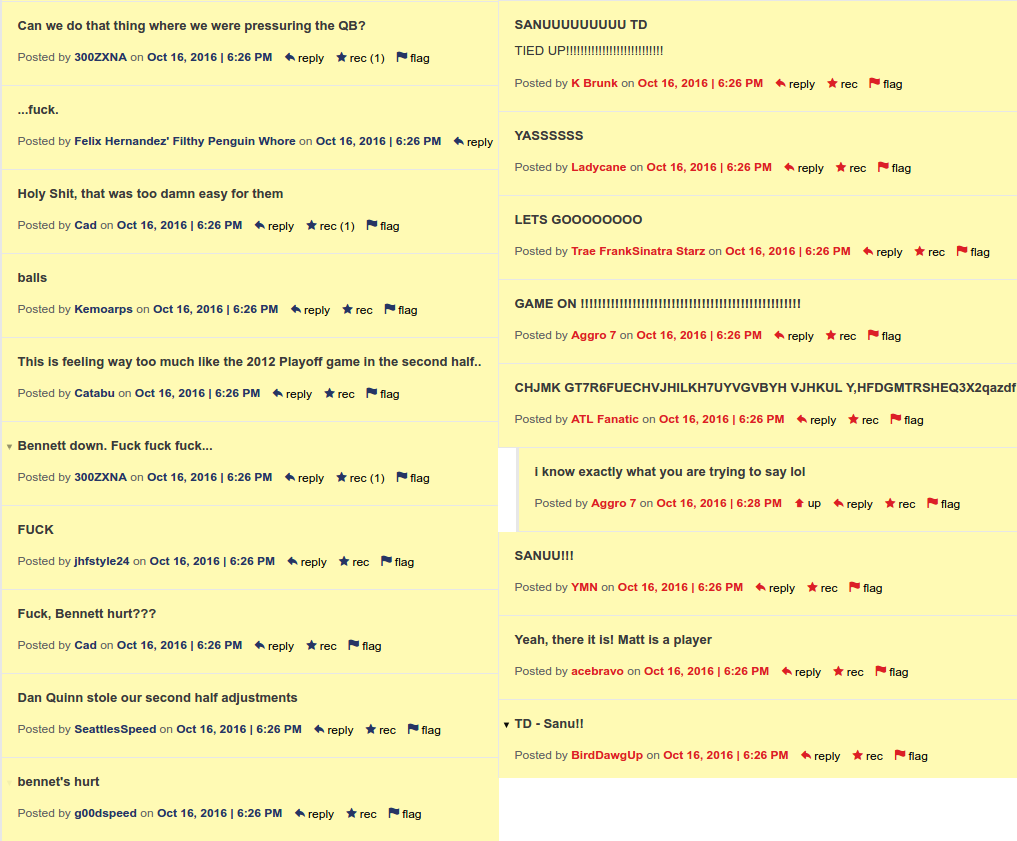 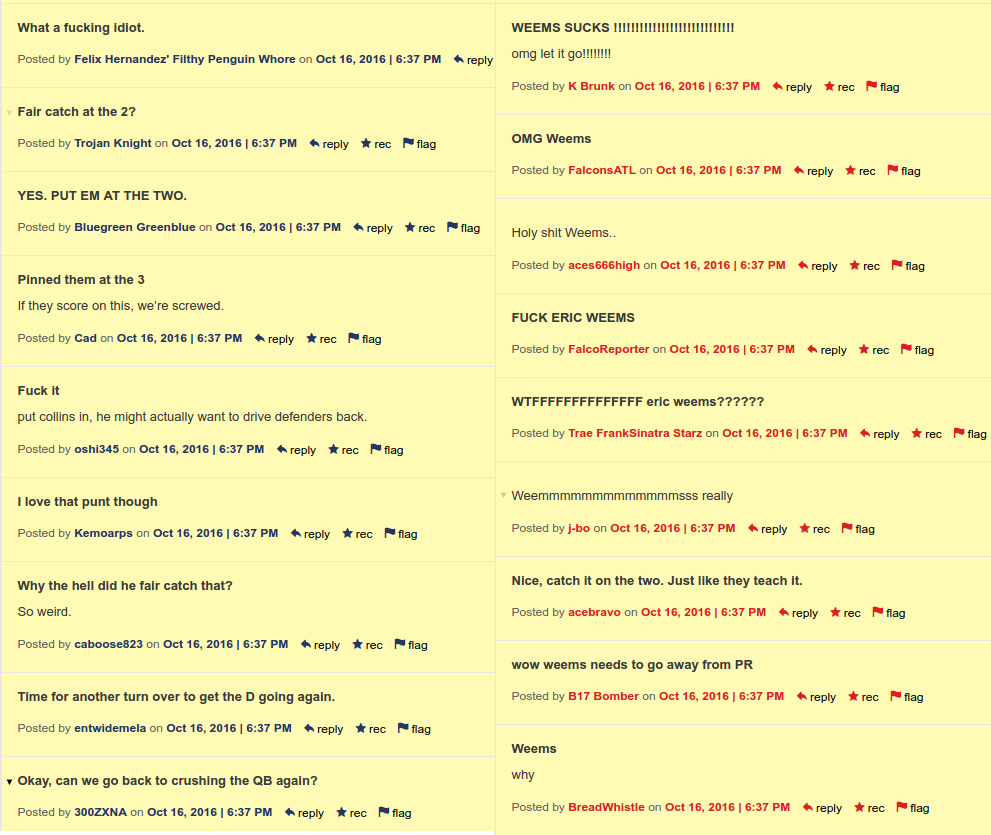 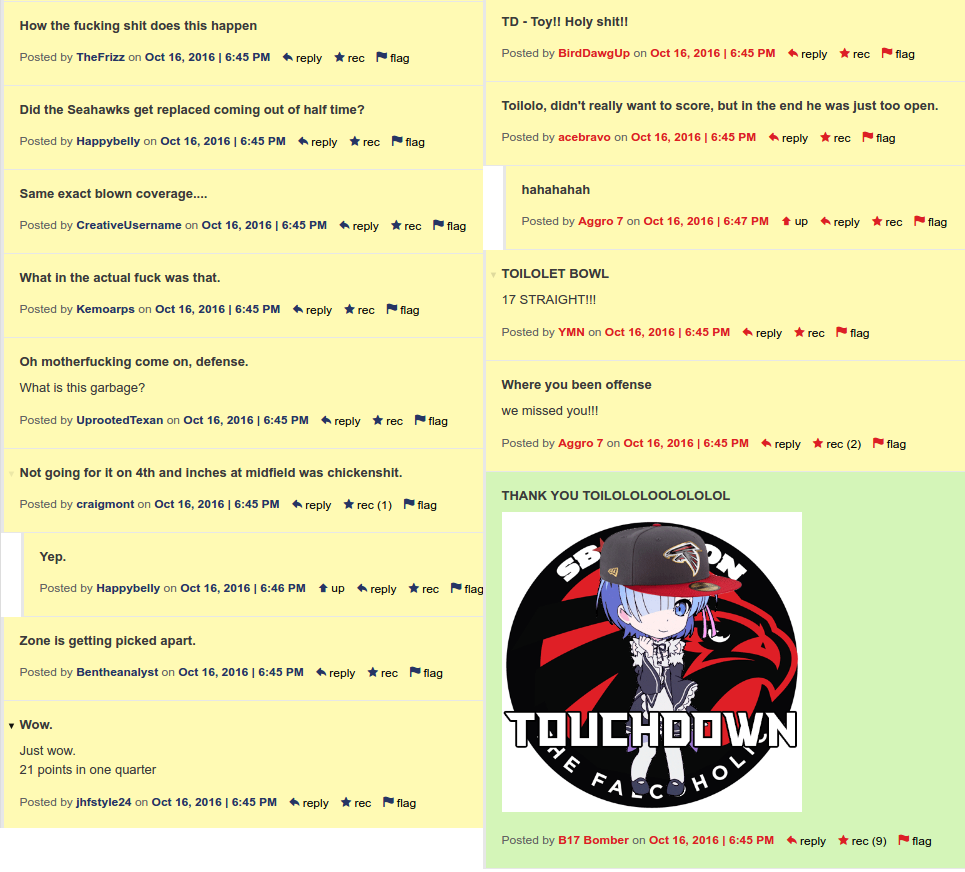 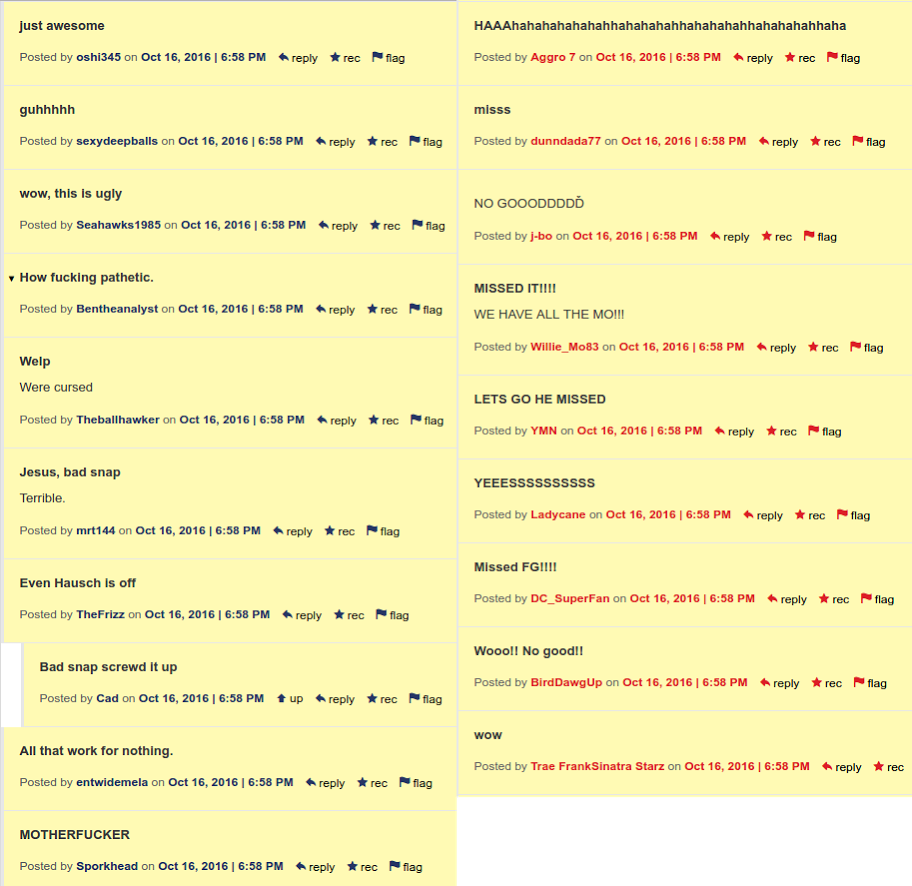 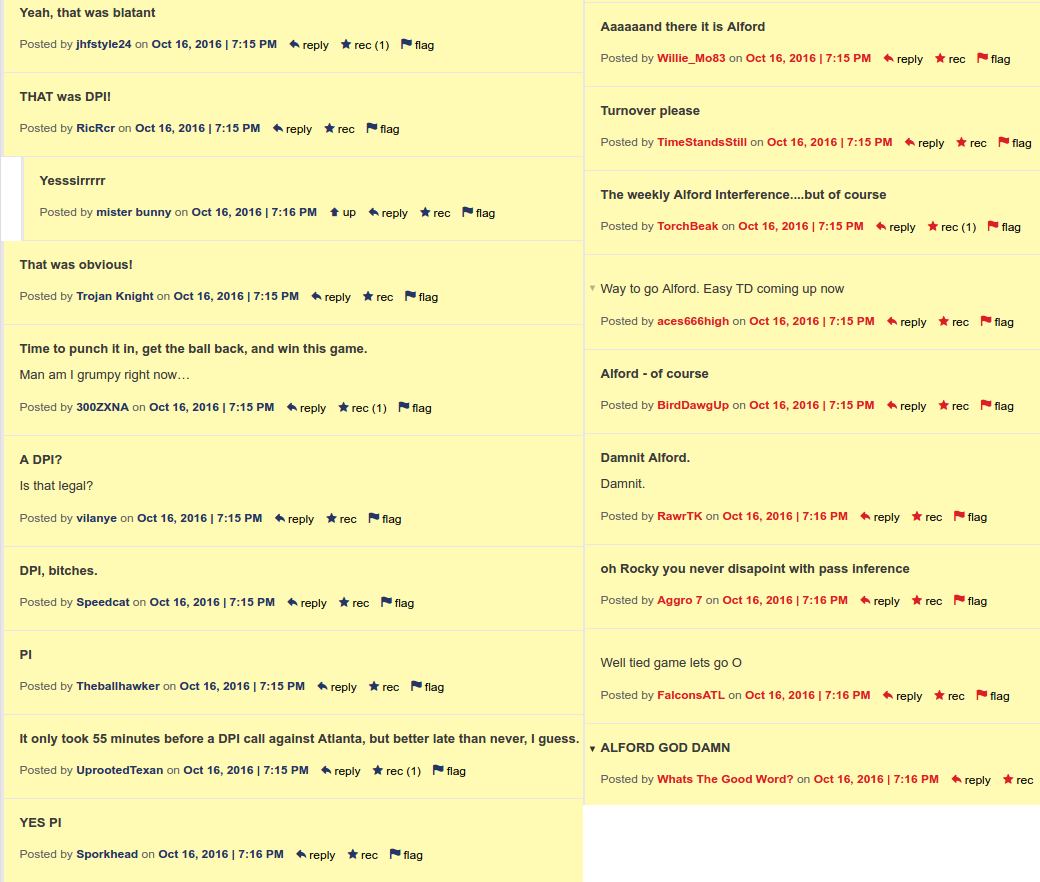 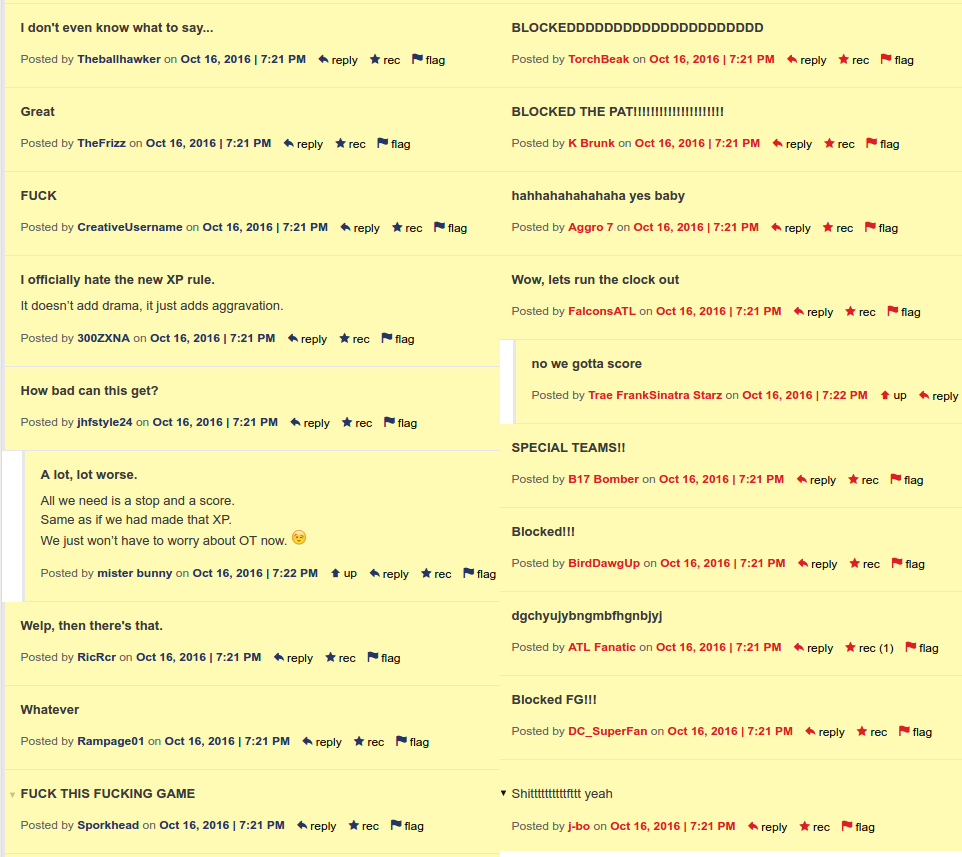 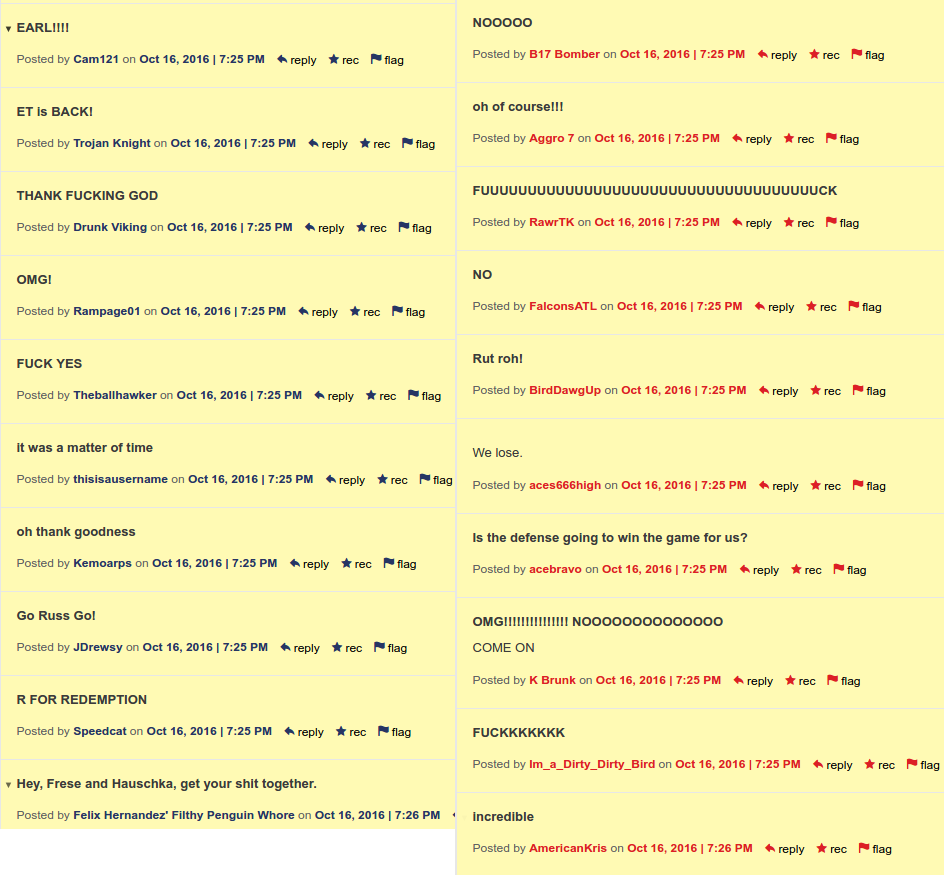 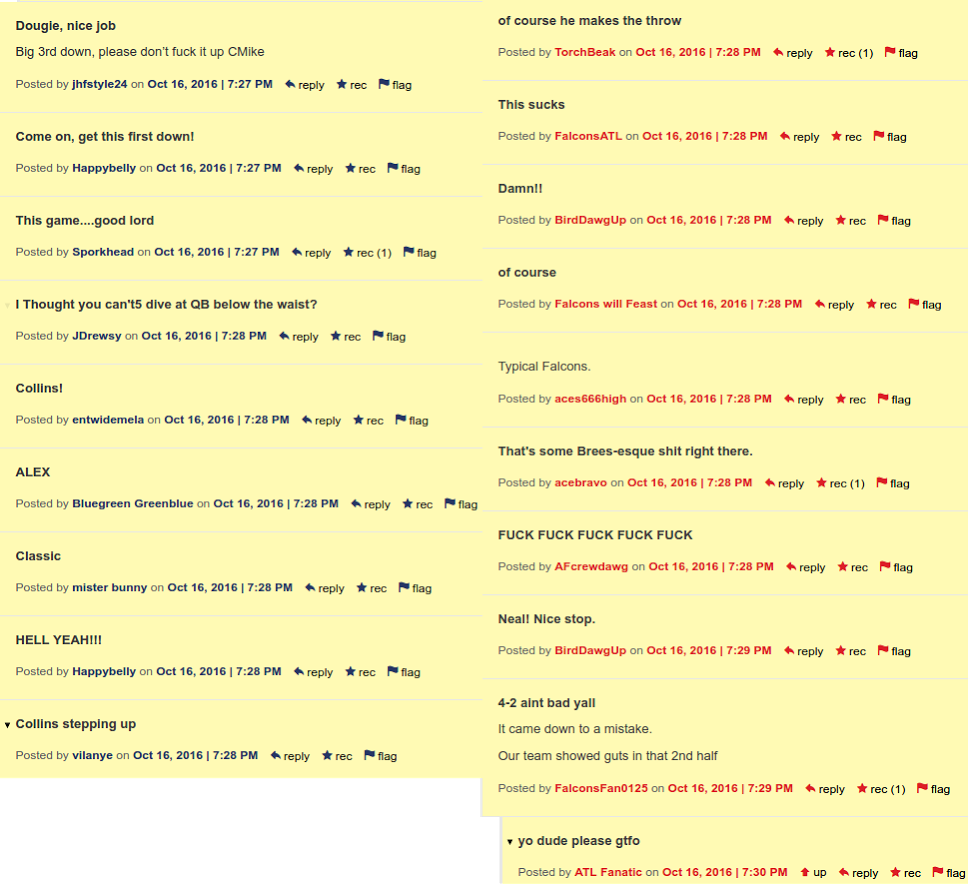 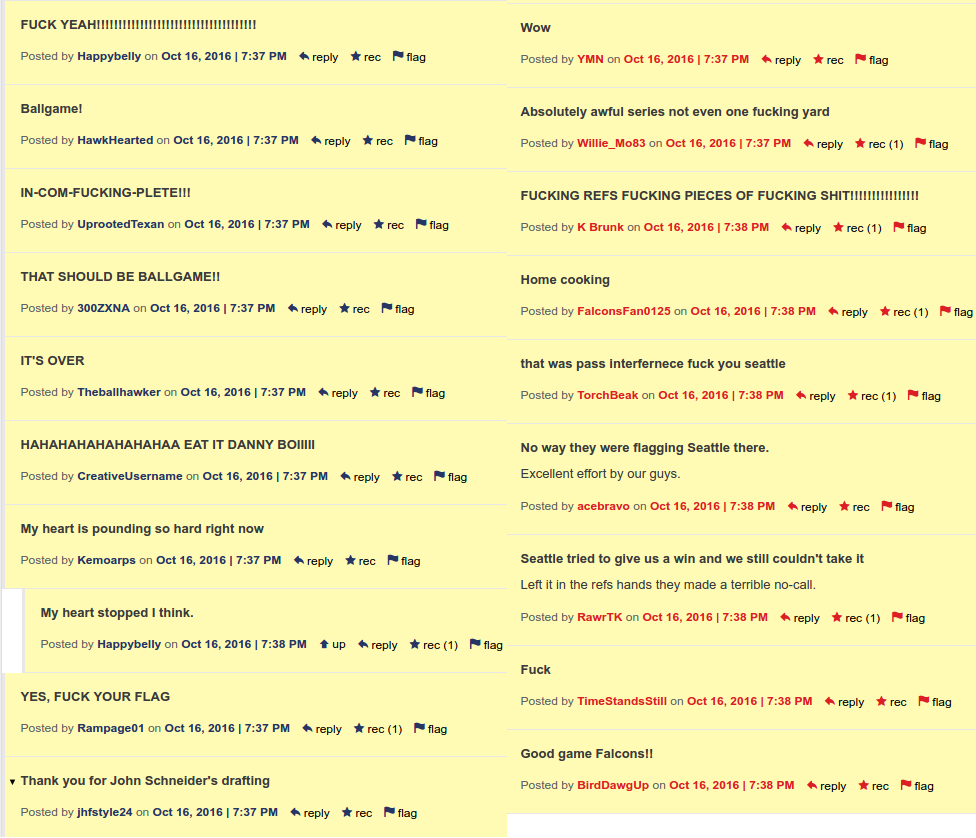 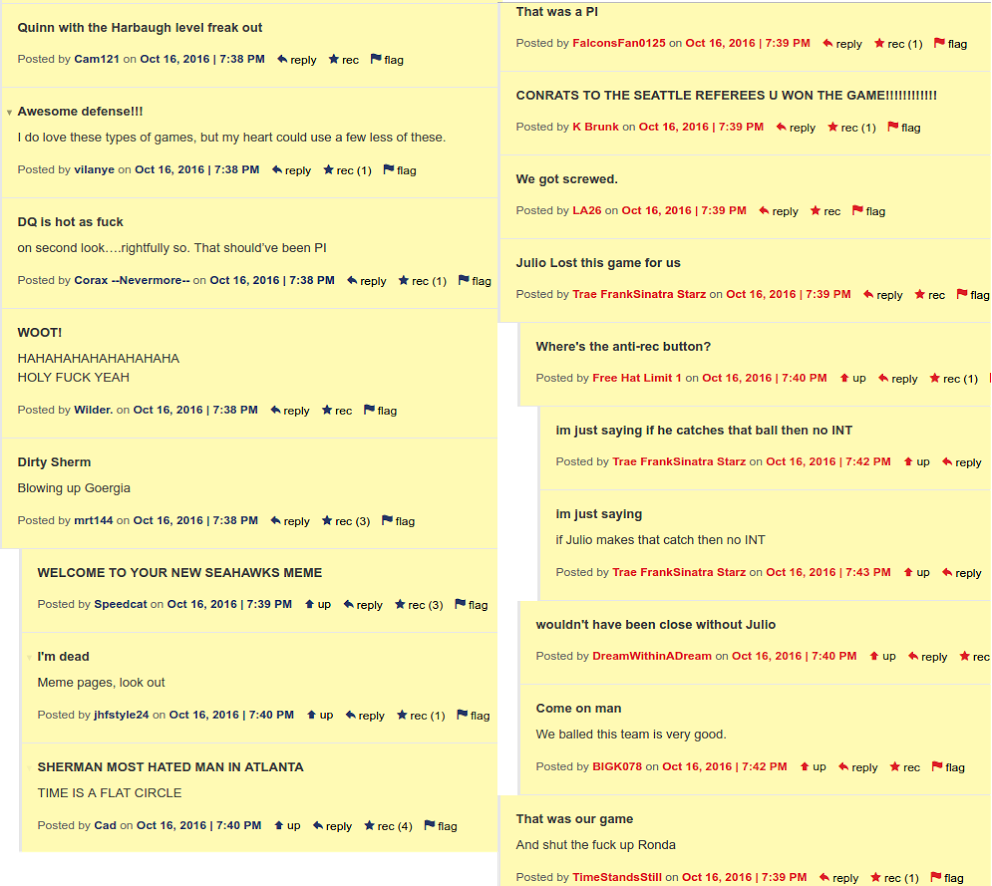 The no call cost the Falcons their last shot of a win in Seattle and was a great example of the failures of the officials all day long. They appeared to be biased on more than one play in Seattle. The Atlanta defensive line was held more than once in the game and was not given the call. At one point in the game the Falcons defensive tackle was being held back by the Seattle center by a blatant holding call that again the officials failed to call for the Falcons.

This pattern continued through out the game and ended in a call that should become the poster child for why penalties or lack there of should be something that coaches can challenge or the booth can review. Seattle and Atlanta fans alike knew what should have been called on that play as well as the booth. The fact that the officials refused to throw the flag or even talk about such a crucial call again proves that human error will always play a role. The easiest way to fix this? Make penalties or lack there of something you can review at the very least in a game winning situation.

The flip side of this is that the Falcons were put in this position when Matt Ryan threw a pick late in the second half. Instead of running time off the clock the Falcons opted to be aggressive and paid for it with the loss. Matt Ryan forced in the ball into tight coverage and for once it didn't go in the Falcons favor. Julio Jones had the ball bounce on his hands off Richard Sherman and right into the waiting safeties arms. Regardless of the officials lack of ability to call a fair game that play hurt the Falcons just as much and shouldn't be underscored. - Kit Anderson, ATL All Day

Post-Game: The Falcons got jobbed, but did themselves proud

There can be no shame in losing a game like this to an opponent like this, but the Falcons' faces spoke of an opportunity grasped but not quite seized. Asked if he felt his team had actually won, Quinn said: "No. But I feel like we battled."

They did. In many ways, this game — again, officially a loss — told us more about these Birds than any of their four victories. It told us they could stand toe to toe with the team that has been the NFC's best since that January 2013 playoff loss, told us they could fight the good fight and come within an official's decision of winning. If there's such a thing as a rousing loss in professional football, this was it. - Mark Bradley, Atlanta Journal-Constitution 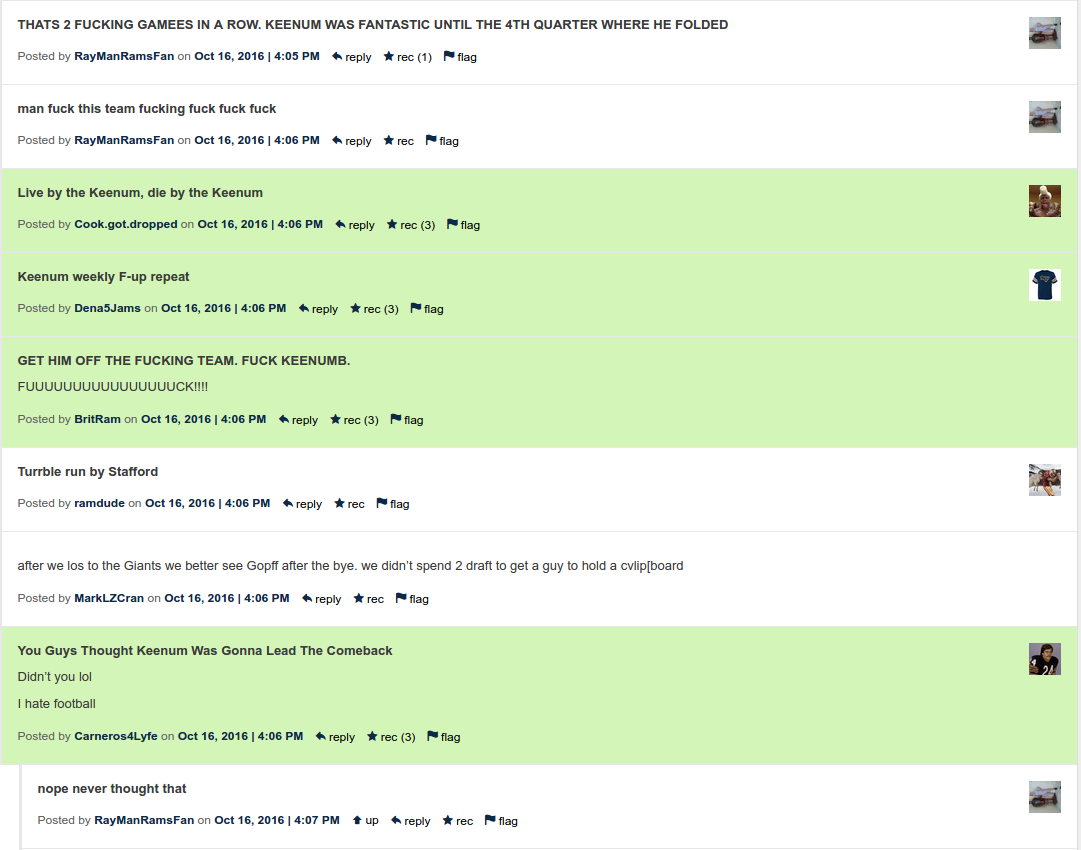 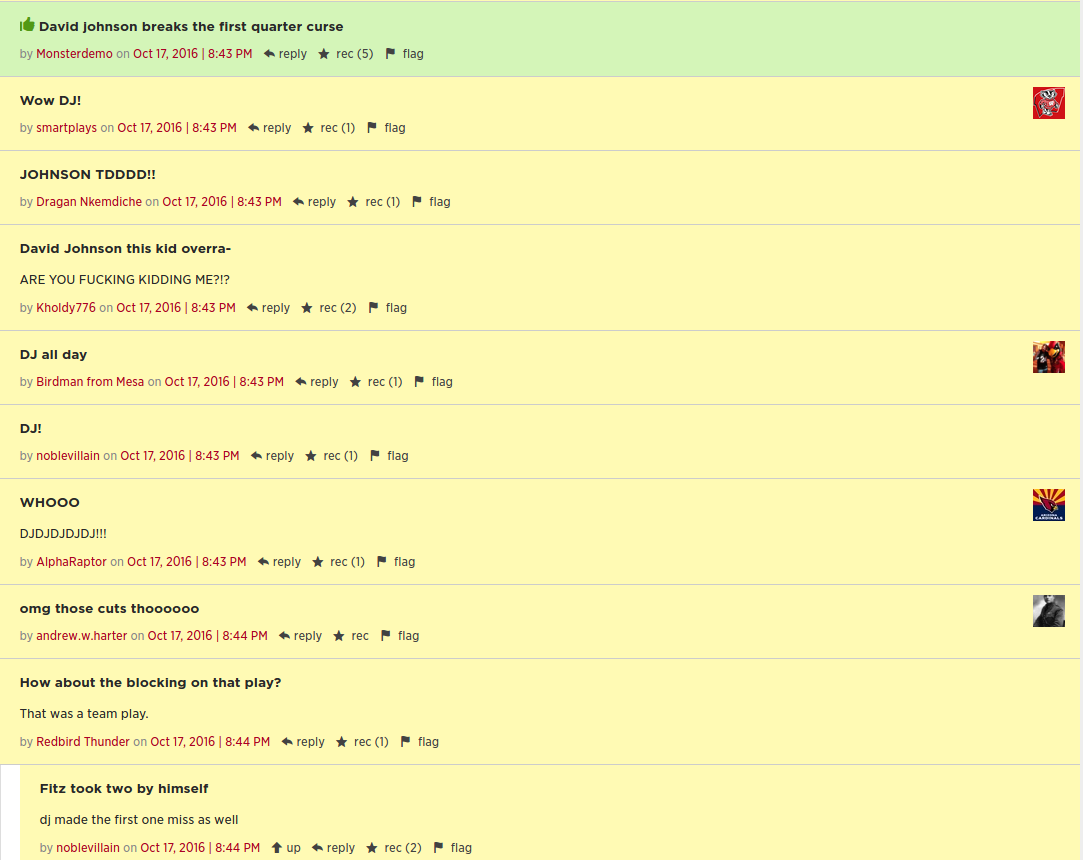 Up next for the Seahawks is a Sunday night game at Arizona, who have clawed back to 3-3 after a dreadful start to the season. A win for Seattle, coupled with a Rams loss to the Giants in London, would put Seattle firmly ahead of everyone else in the NFC West, and it would take a big collapse for Seattle to relinquish that lead. It's primetime, it's a division rival, and Arizona has lost its last 3 home games to Seattle by a combined score of 105-34. This is Seattle's first primetime appearance of the year, and last year's unusual blip aside, we know how excellent the Seahawks have been in night games.

Thanks to everyone for reading, and go Seahawks!