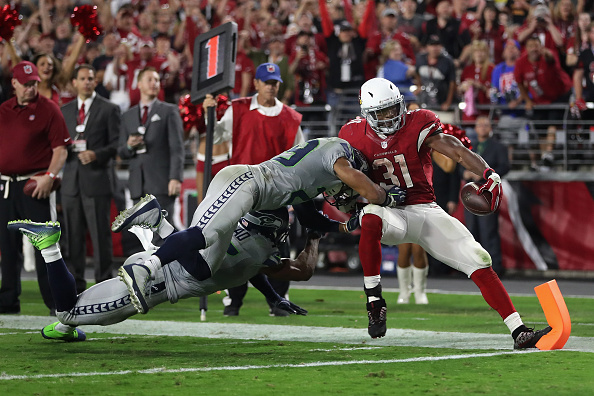 Technically speaking, this is the 2nd time I've done an Enemy Reaction for a game ending in a tie. In 2012, the 49ers and Rams played to a 24-24 stalemate, with both David Akers and Greg Zeuerlein missing game-winning field goals in the extra session, and the Rams having an 80-yard pass (which would've led to a really short field goal) and a made field goal both wiped out due to penalties. You can take a trip down memory lane here.

I initially wasn't going to bother with an Enemy Reaction for this game, as it felt way too much like that 2013 MNF game against the Rams. The overtime that ensued (plus the ensuing fan poll) changed my mind. We're about to venture into unchartered territory; it's an Enemy Reaction where the Seahawks don't win. Did Revenge of the Birds treat it like a loss? What about Field Gulls? You're about to find out. 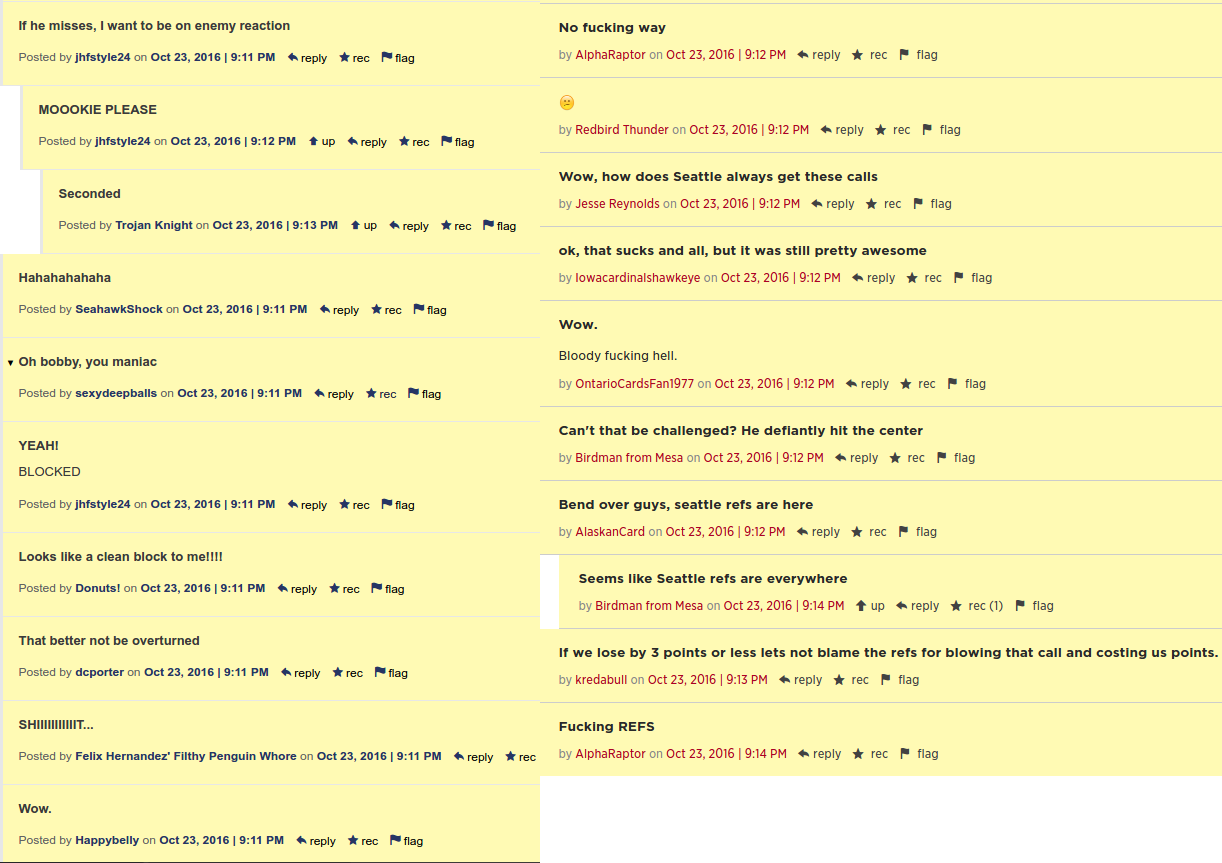 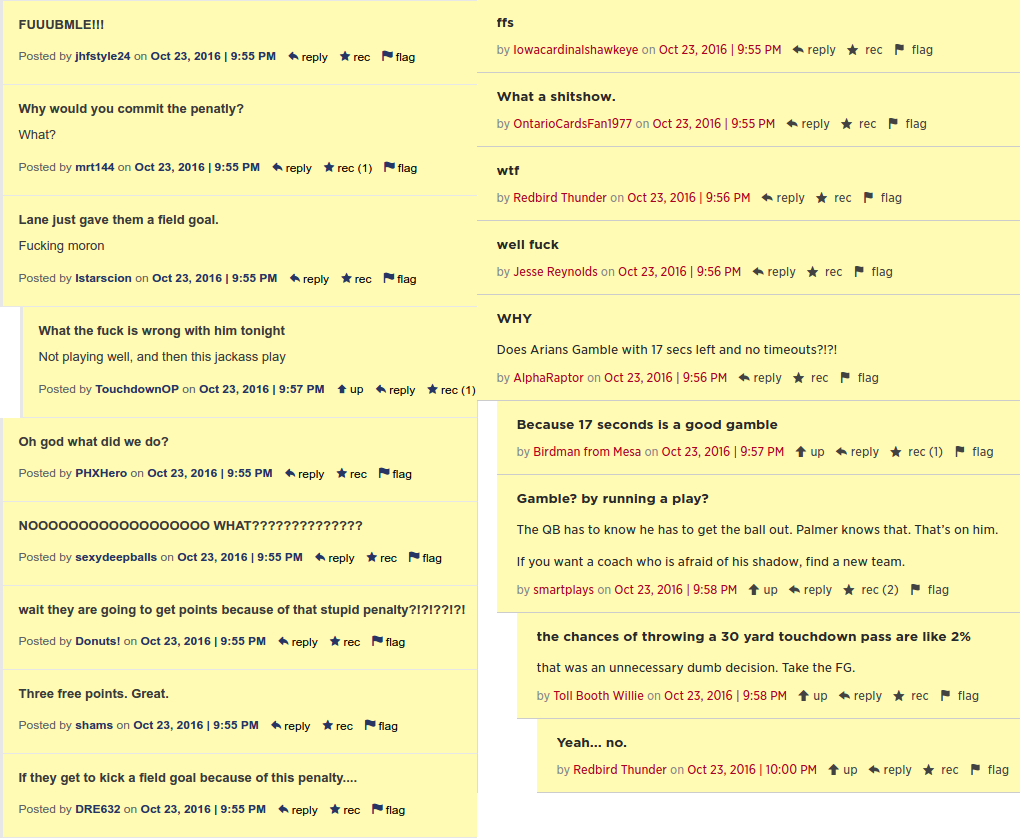 Jeremy Lane's mindless penalty offsets Arizona's, so the half ends, and some of ROTB isn't happy (3-0 ARI) 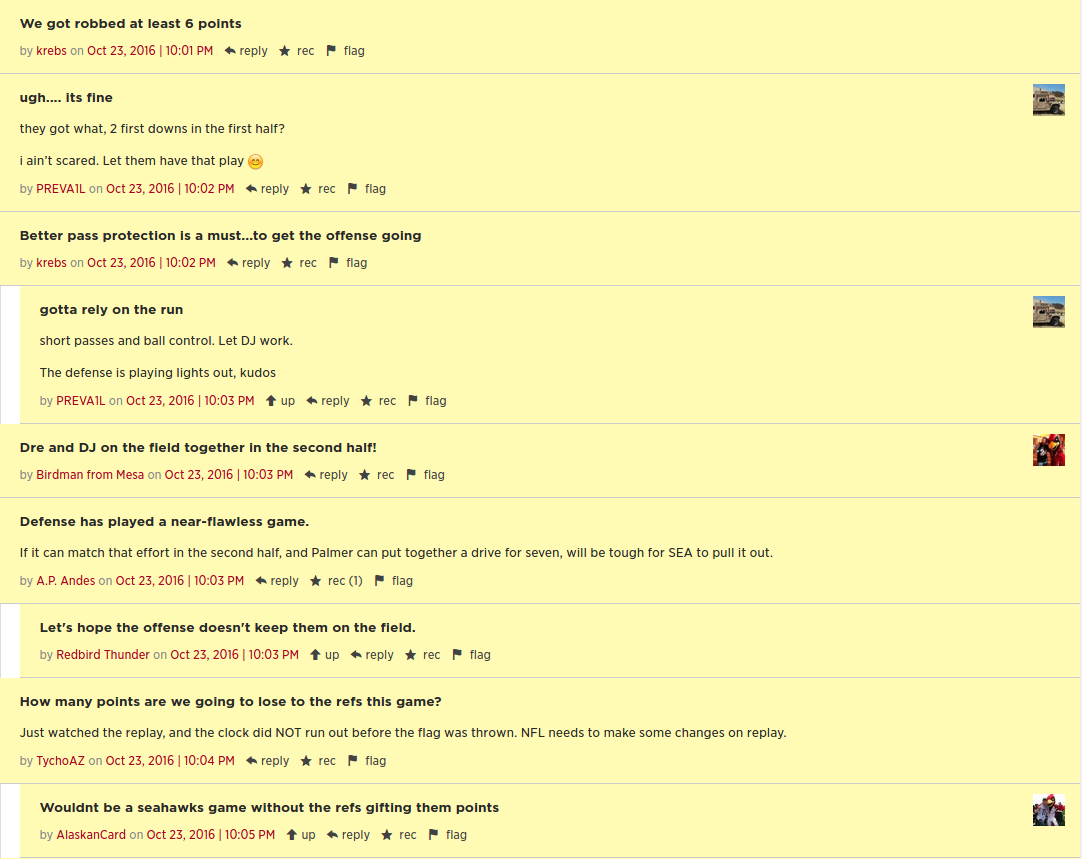 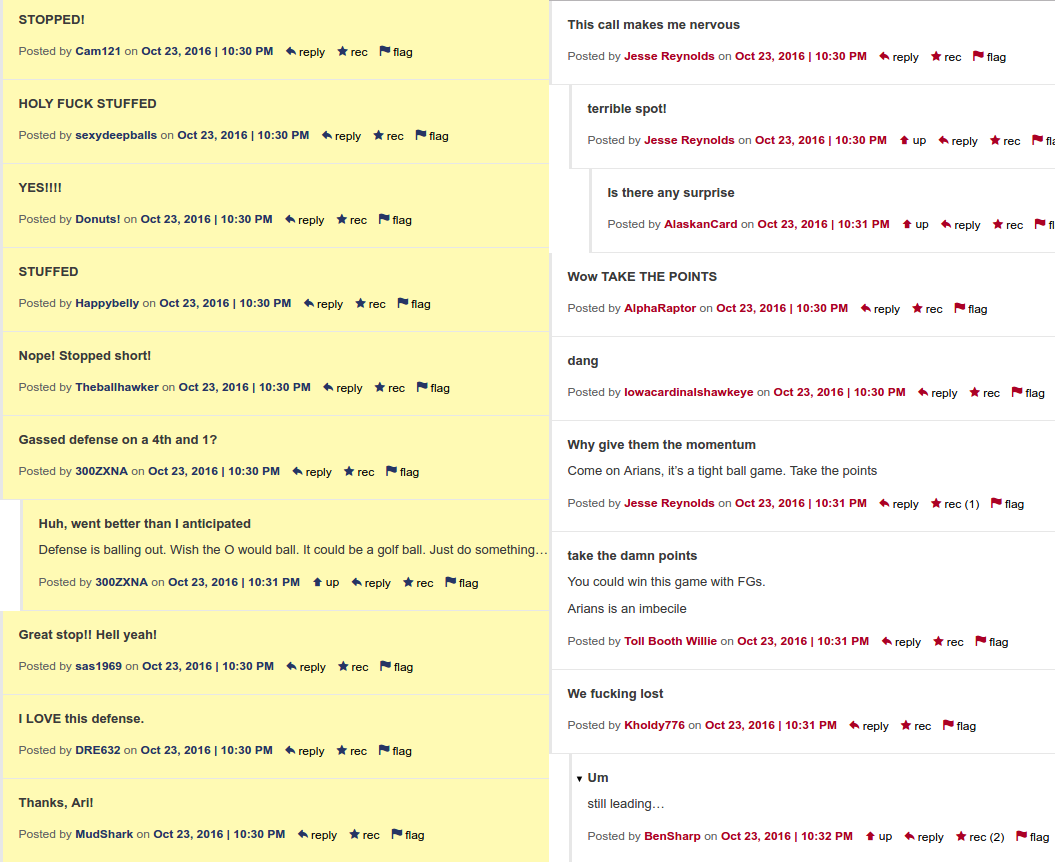 Chandler Jones strip-sacks Russell Wilson, but Seahawks recover at their own 1 (3-0) 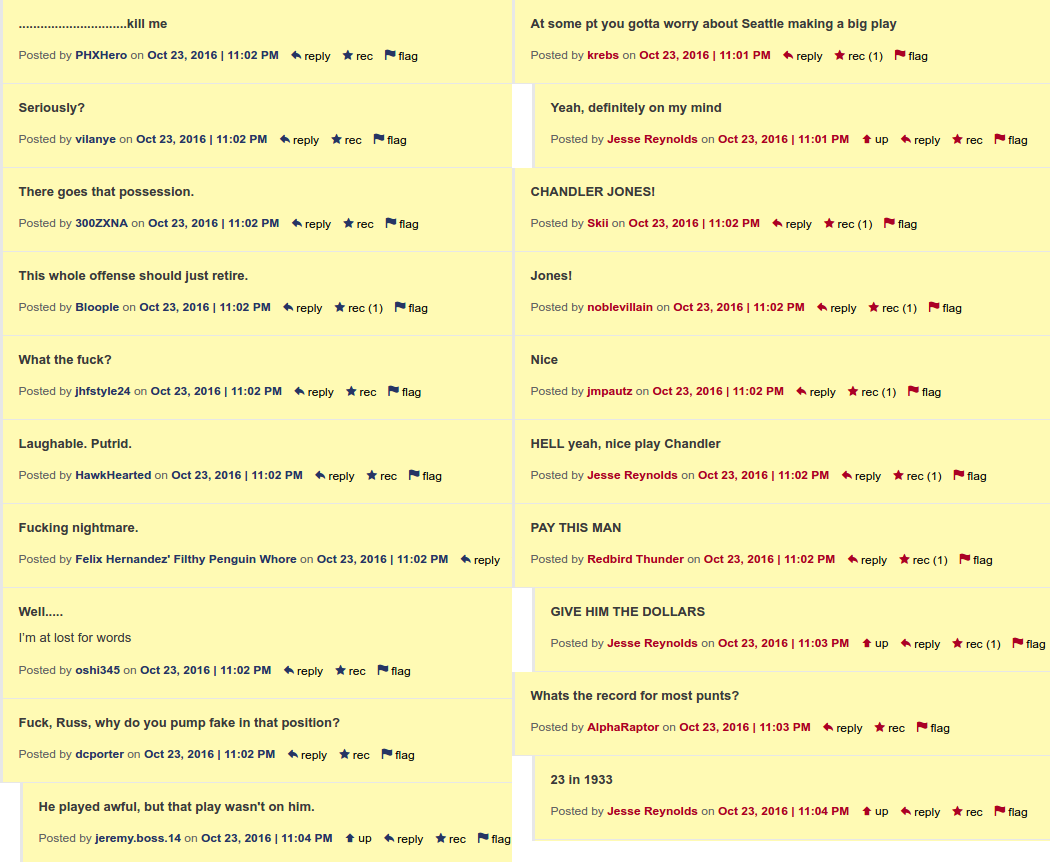 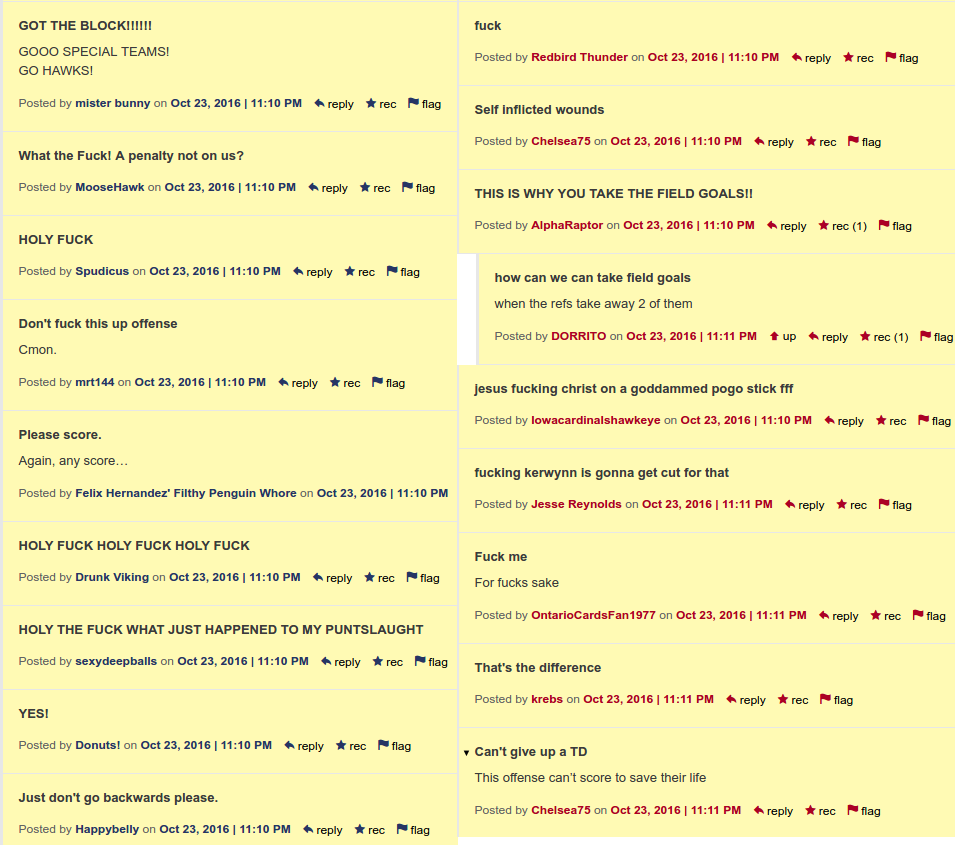 @guga31bb holding on Gilliam with 55 seconds left in regulation on 1st and 10 from midfield backs SEA up pic.twitter.com/SBiC4OmWEt 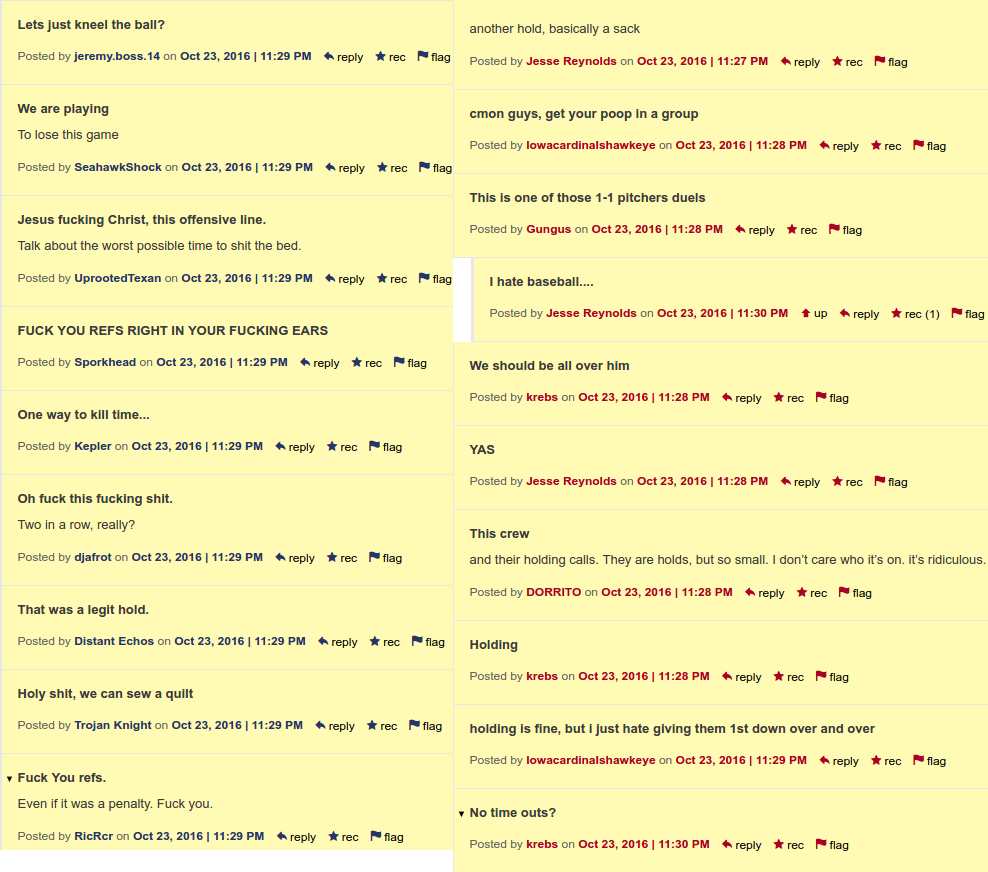 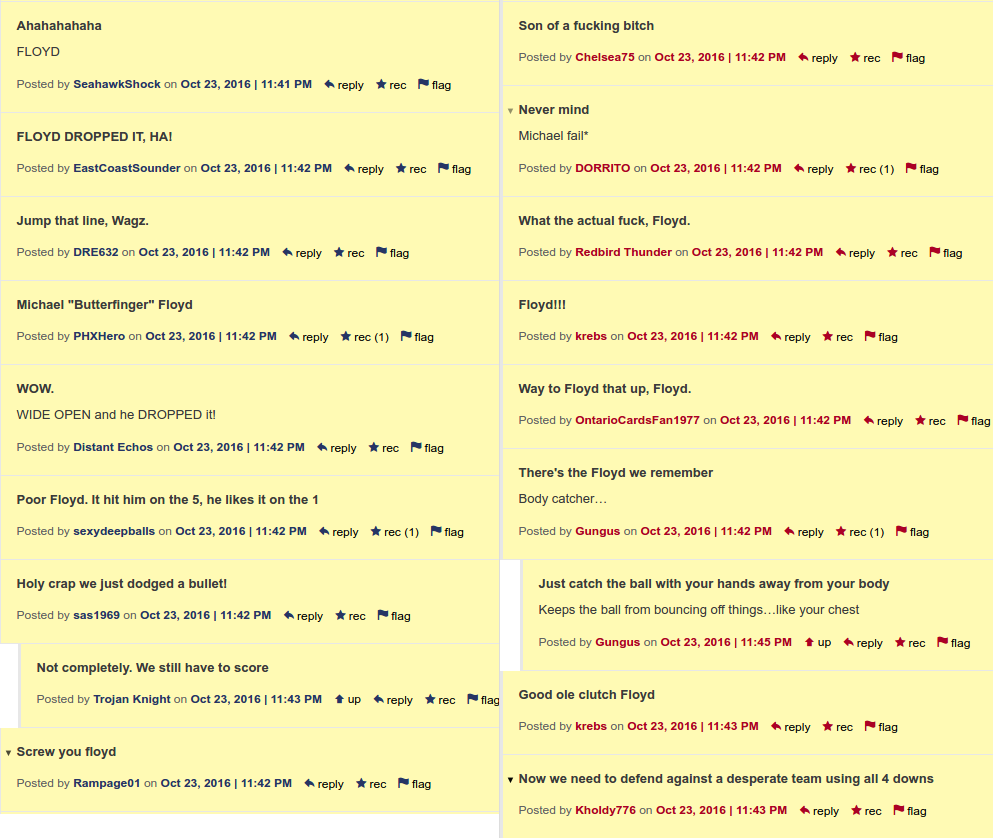 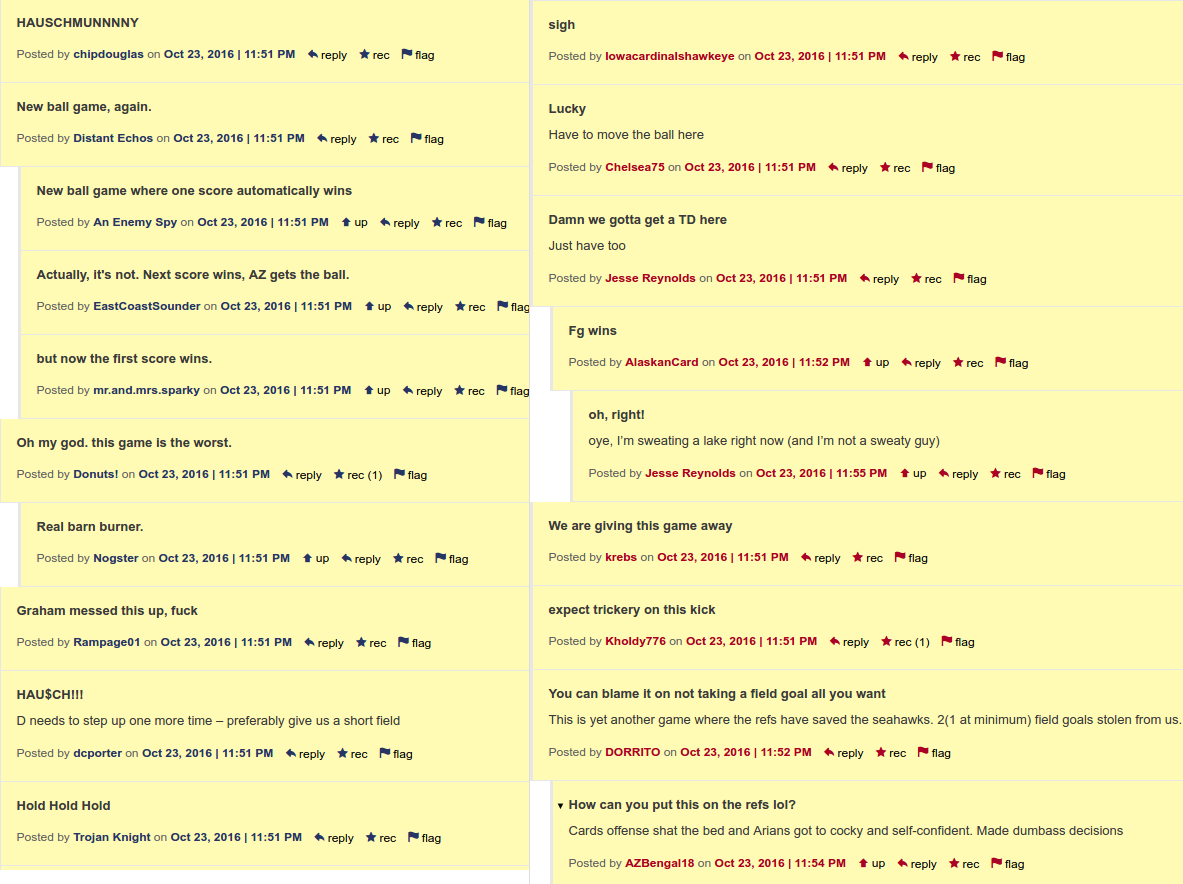 ...We should've seen this coming 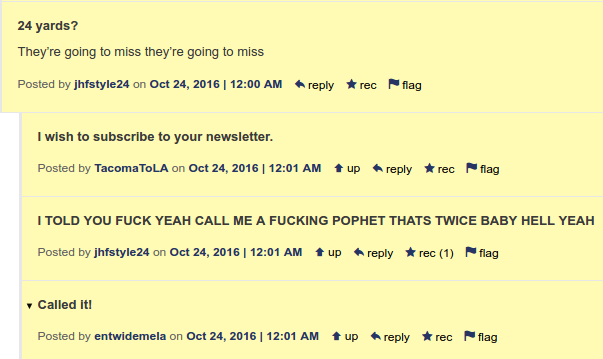 JJ Nelson makes a huge catch, but Kelcie McCray saves the game by denying him a TD (6-6) 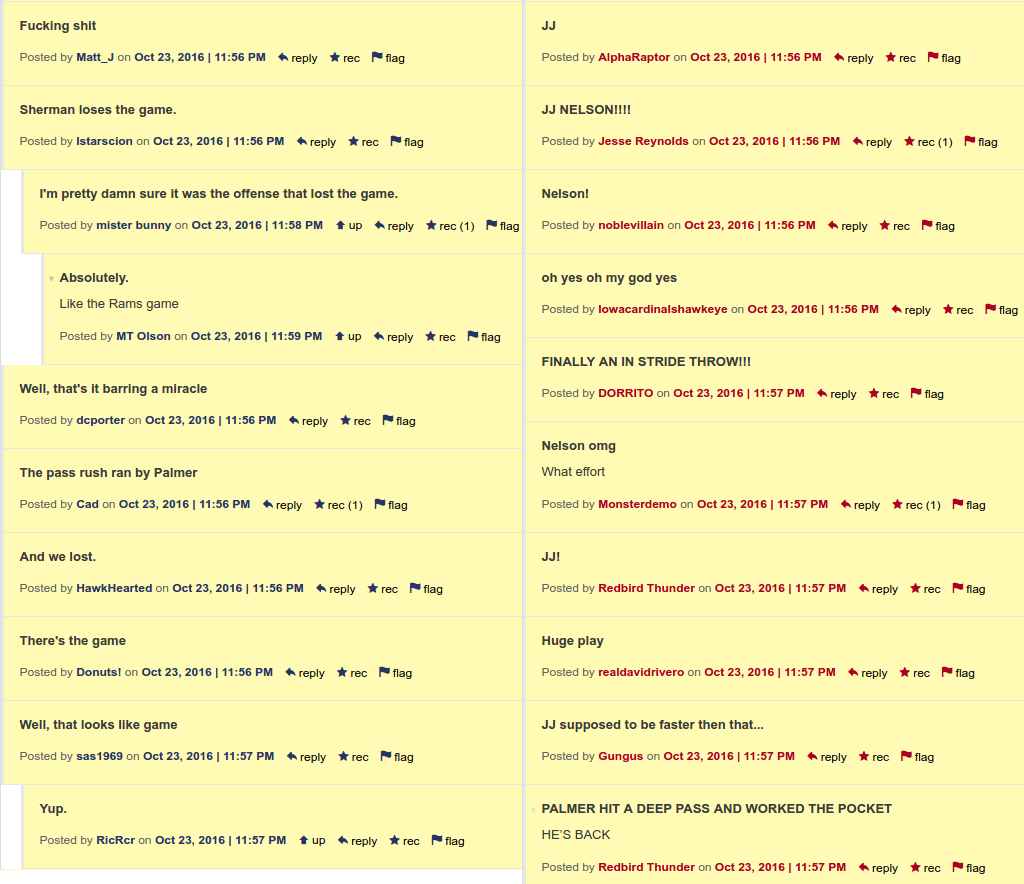 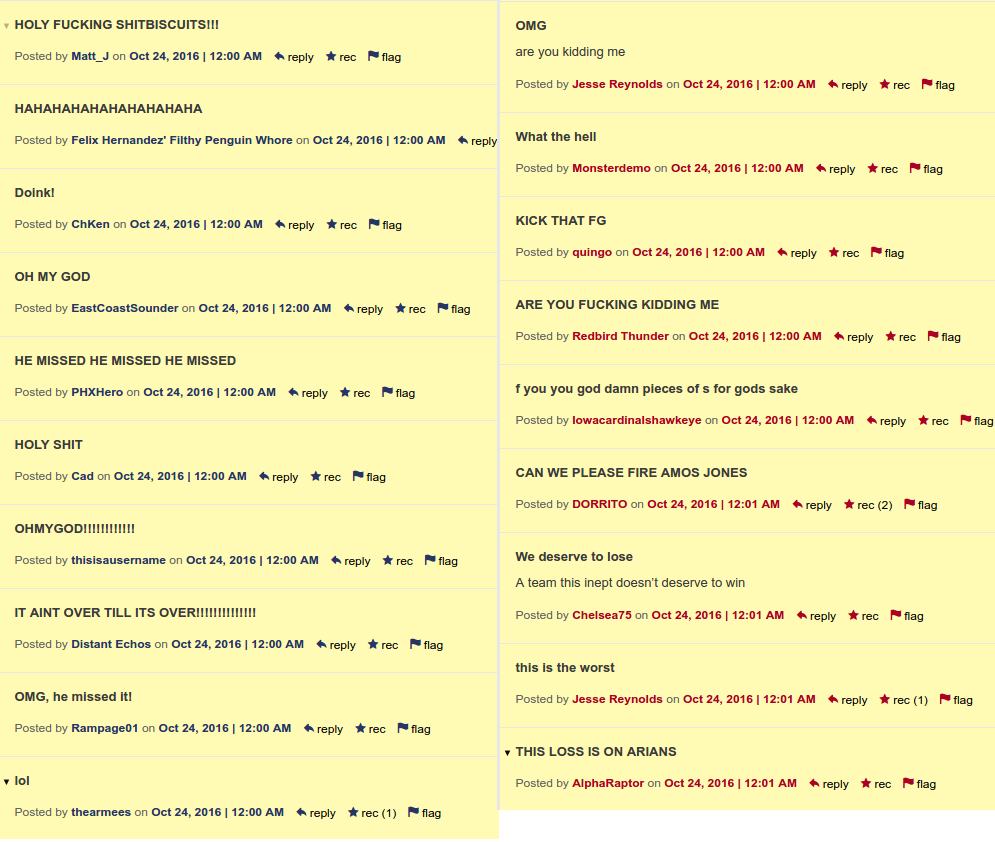 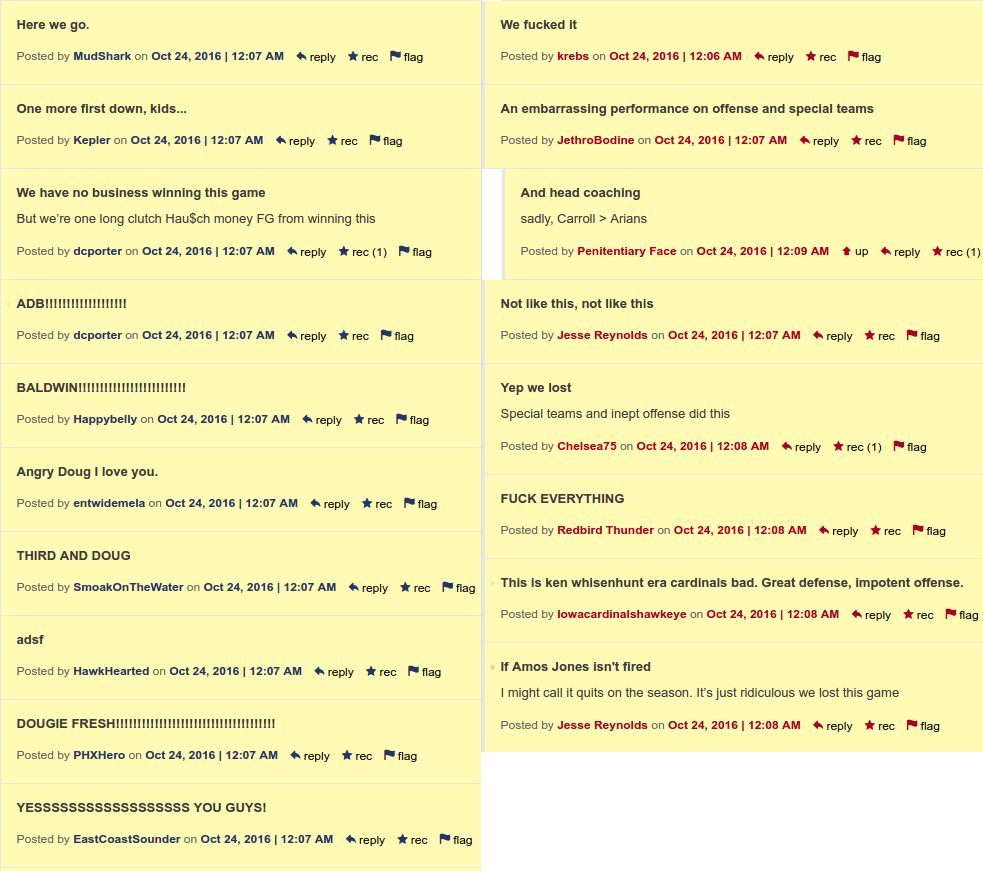 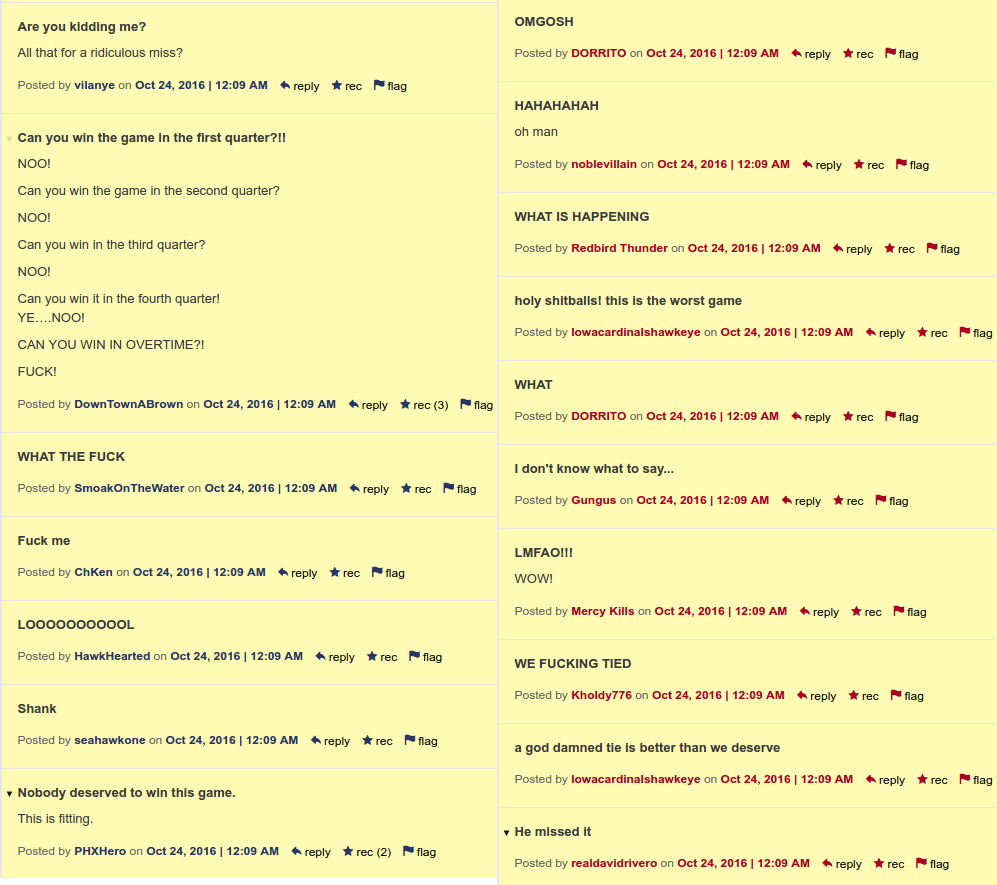 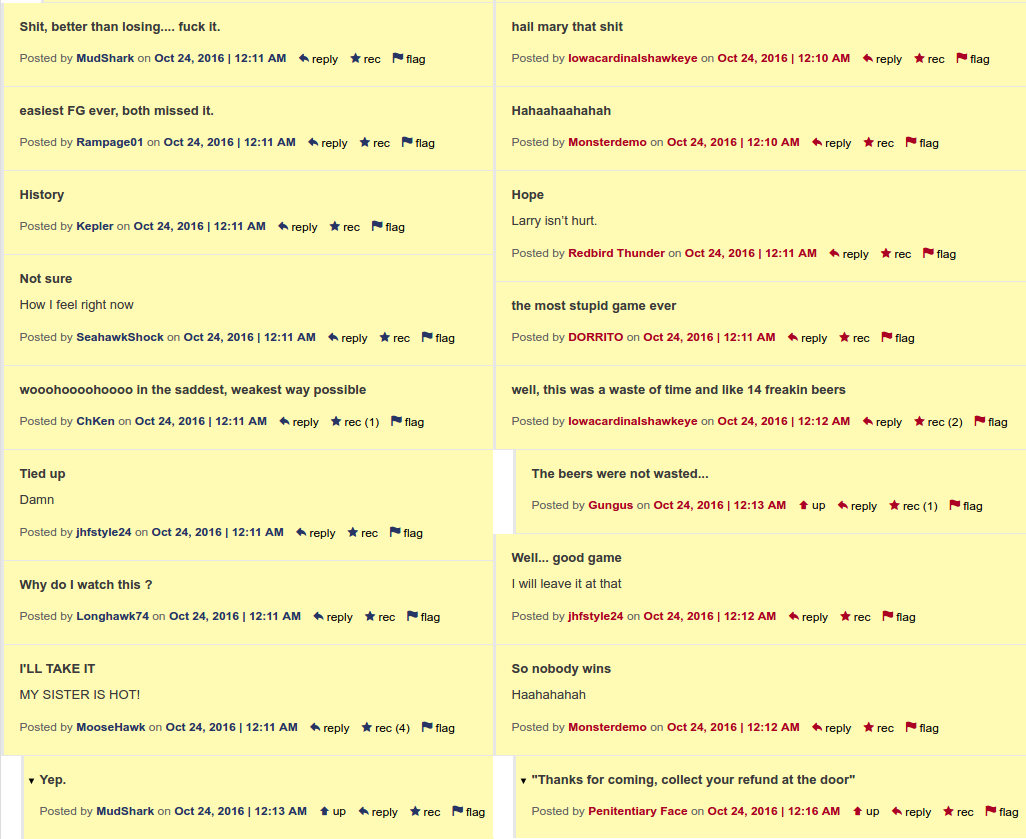 Post-Game: Long snappers are not hurdles

The fact that the NFL is allowing this is concerning. With the emphasis on player safety currently at its peak, the league needs to address this situation immediately.

Imagine if the Highway Patrol took the same approach - drive in the suicide lane as much as you want, as long as you don't crash into anyone!

By not allowing players to leap over the long snapper, there are multiple players saved from potential harm. Not only is the long snapper not at risk, but the leaping player as well. We all saw Wagner twisting and turning as he clipped Brewer's back on his way down after getting a shove from another offensive player. It isn't out of the realm of possibility to think that Wagner could have been blocked enough to land right back on Brewer, injuring both of them. Blocking a defender leaping over the snapper is akin to a defensive back hitting a receiver in the legs as he jumps for a high pass, only to make him flip on his way down.

What we have here is a classic case of teams finding a way to take a rule meant to promote safety, and creating an even less safe situation. I would love to see players quit leaping over one another altogether. Whenever I see a player do it in the open field, I fear they will get injured.

All I can hope for is that the NFL sees that this is an unsafe play and can create a rule disallowing it. Other teams across the league will most likely start finding a player on their team that can do this, seeing as it actually worked last night. - Ray Finney, Cardinals Fan Blog

First, Arians loses a crucial timeout trying to challenge a call that he can't challenge when Bobby Wagner leaped over long snapper Aaron Brewer and blocked Chandler Catanzaro's 39-yard field goal in the first half. The play is not reviewable and the timeout came back to bite Arians right on his rear end when, at the end of the first half at Seattle's 25 yard line with 17 seconds remaining, Carson Palmer was sacked and fumbled. Although Cards offensive guard Earl Watford recovered the fumble at the Seattle 32, time ended up running out because Arizona was out of timeouts. So instead of attempting a 49-yard field goal to end the first half, Arizona got nothing. Sorry, but that is on Arians for wasting a timeout he needed.

Second, in a close, physical football game where points are a premium, Arizona has the ball fourth-and-1 at the Seattle 19 yard line on its first possession of the second half, and what does Arians do? Does he kick the field goal from 36 yards out to go up 6-0 and make a challenged Seattle offense have to score a touchdown against an Arizona defense playing its best game of the year to beat them? No, he decides to run on Seattle's vaunted defense. And David Johnson gets stopped for no gain.

Third brain fart by Arians was at the end of the game. Seattle has back-to-back holding penalties moving them back 20 yards to their own 28 yard line. On first-and-30 with 41 seconds left, Seattle attempts to run out the clock with a run by C.J. Prosise for no gain. With all three timeouts remaining and a chance to get decent field position and set up a game-winning field goal attempt, Arians elects to use none of his timeouts and go to overtime. Seattle would have run two plays, used eight seconds up and had to punt from inside their own 20 yard line, giving Arizona a couple cracks at getting in field goal range. Doesn't make sense.

Blame who you want for this bad tie, but I point my finger at Arians. - John Gambadoro, Arizona Sports 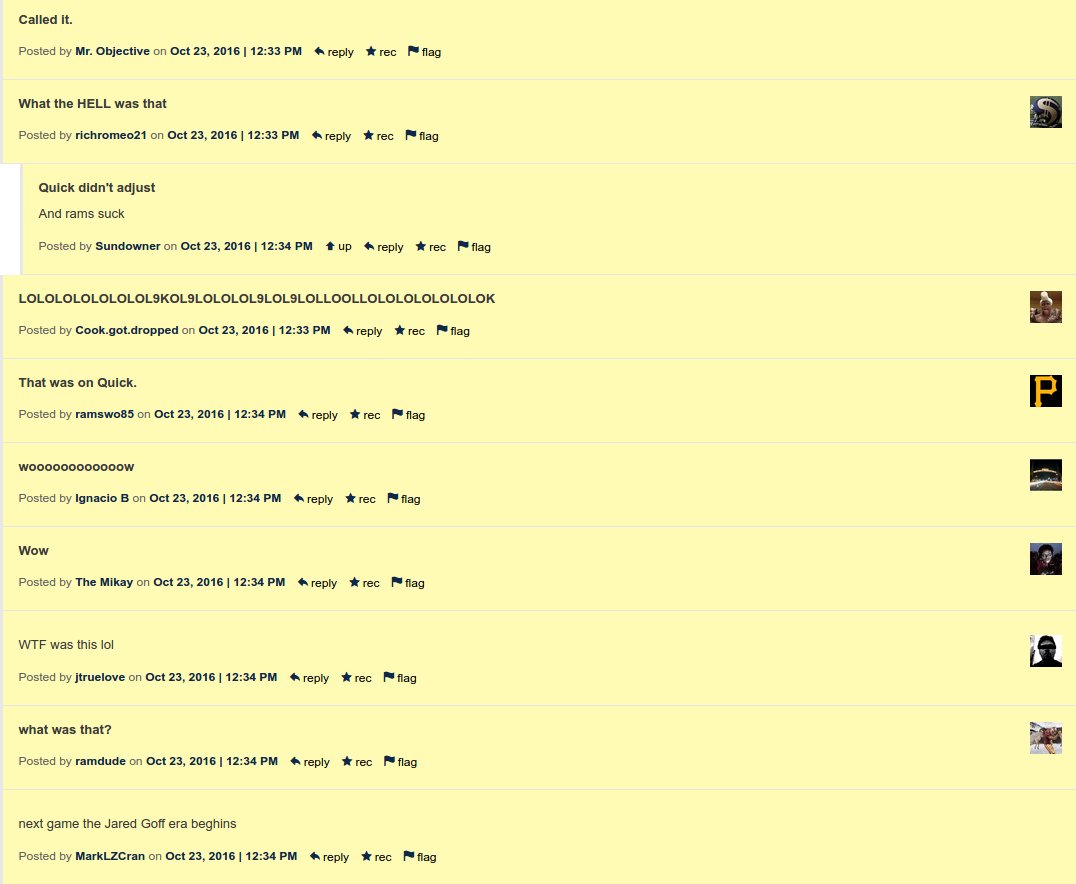 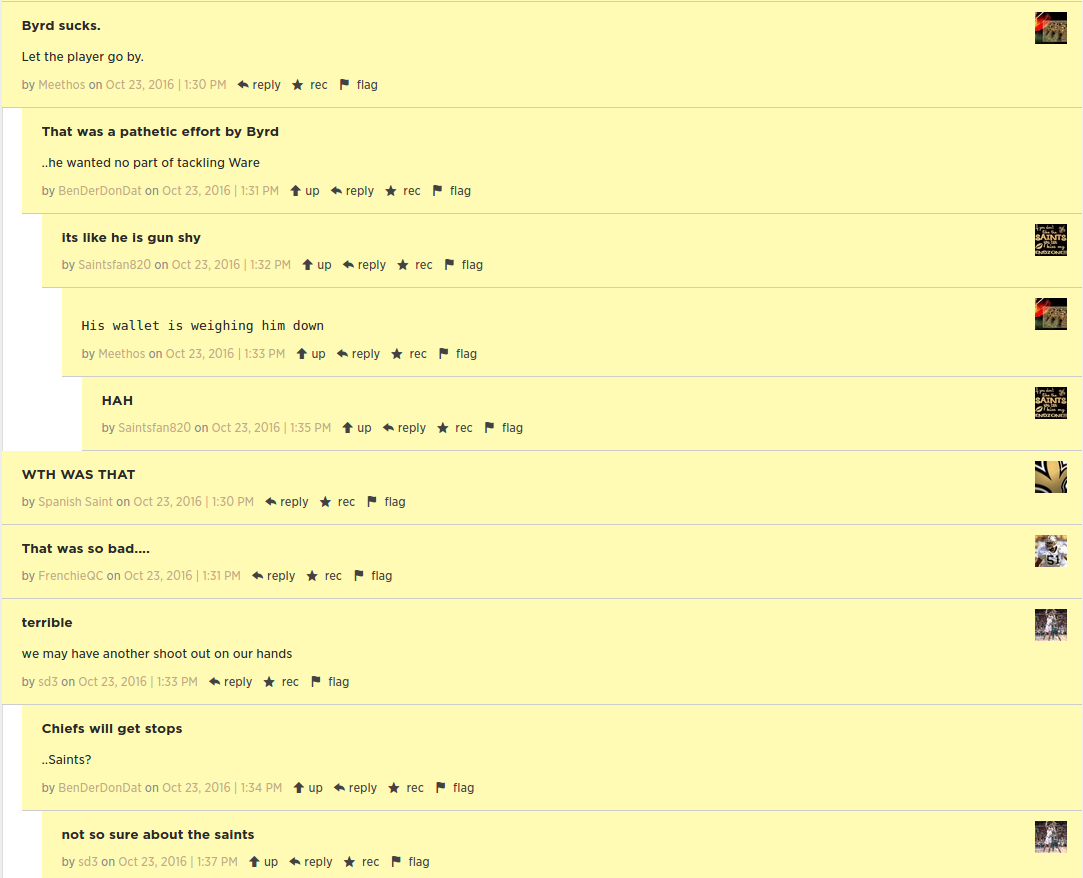 Well that game happened. The Seahawks are 29th in points scored (yes, even behind the Texans, who haven't had their bye week yet), the only team in the league without a 3rd quarter touchdown, but joint-leaders with Minnesota for fewest points allowed. If you're one to believe the defense was culpable for several of Seattle's losses last year, they're arguably the biggest reason why the Seahawks are sitting atop the NFC West by 1.5 games.

This Sunday will be a 10 AM PT kickoff against the New Orleans Saints, who are 2-4, have a rotten defense, but still have a dangerous offense led by Drew Brees. It should be a fascinating matchup, and ideally, the Seahawks offense can get back on track against a team that has given up a staggering 118 points in 3 home games. It's also worth noting that this is the last early kickoff for the Seahawks for the rest of the regular season, and if they win the division and get a first-round bye, they're assured to not have any more 10 AM games the rest of the way.

I hope you enjoyed this somewhat special edition of Enemy Reaction. I'd rather be doing these for when the Seahawks win, so let's get back in the win column by marching into the Superdome and knocking off the Saints.