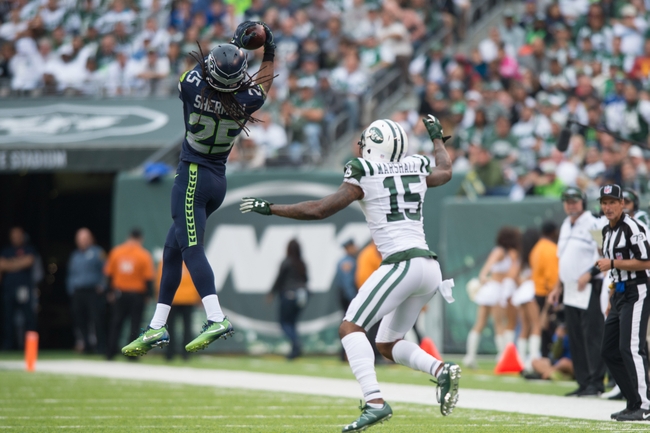 The Seattle Seahawks have made Metlife Stadium their home away from home. They've beaten the Giants twice, thrashed the Broncos to win the Super Bowl, and have now beaten the Jets to make it a perfect 4-for-4 at that stadium. During that span, the Seahawks have forced a staggering 17 turnovers, including 3 interceptions off of Ryan Fitzpatrick yesterday.

Hobbled Russell Wilson? No problem. Rawls and Prosise both hurt? CJ Spiller is here. Tyler Lockett not healthy? Tanner McEvoy has you covered as a deep threat. Jarran Reed inactive? Hold Matt Forte to 27 yards on 14 carries, anyway. Endure multiple awful calls and no-calls by the referees? Still win by double digits. The Seahawks are 3-1, flying high, and the New York Jets will once again be getting the Enemy Reaction treatment. For a little throwback to yesteryear, you can check out the 2012 edition in this link. 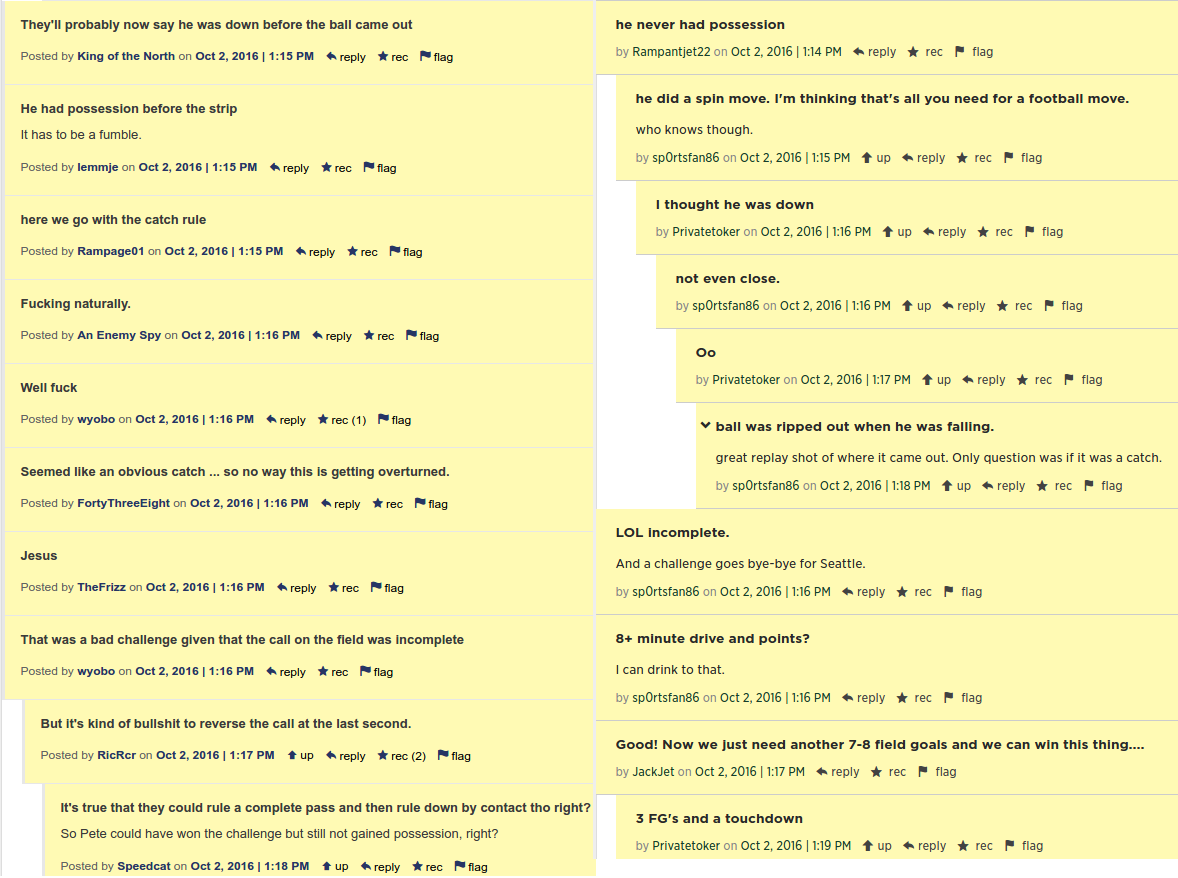 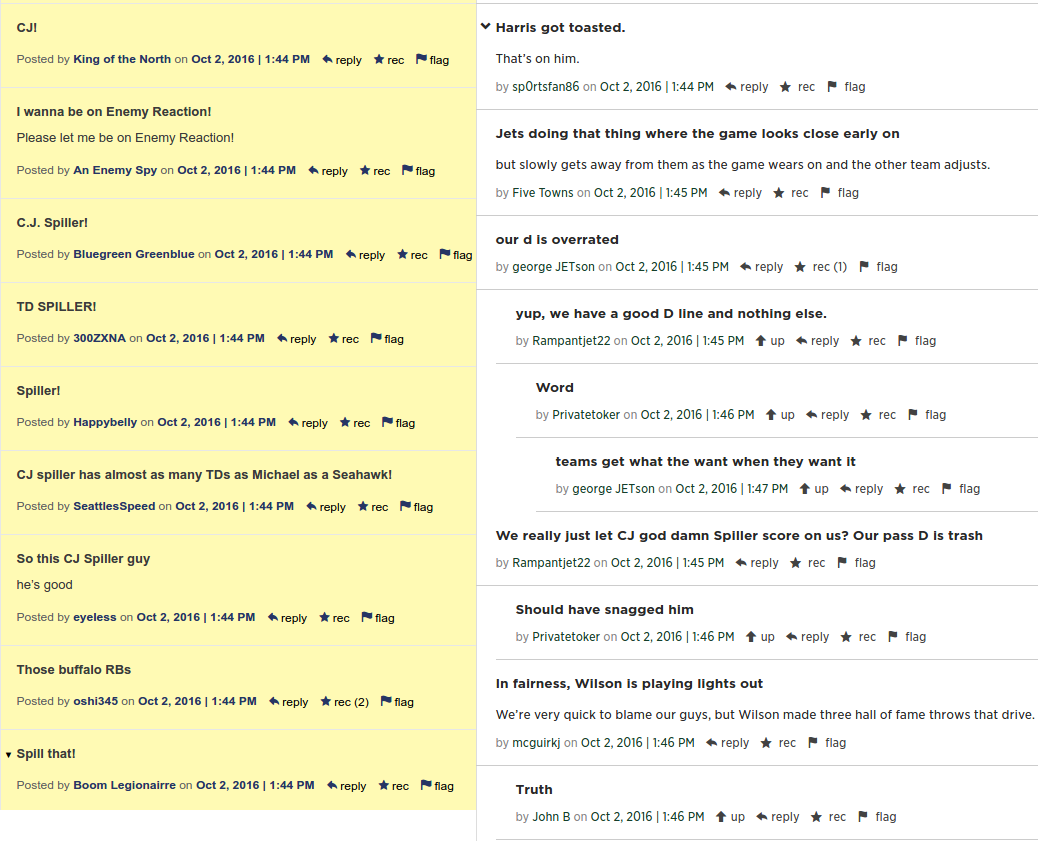 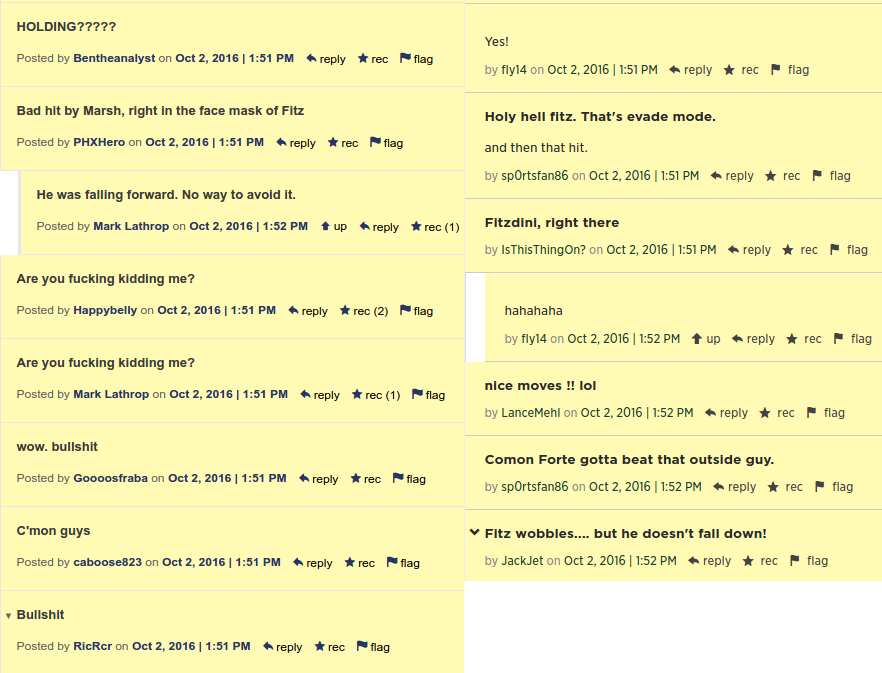 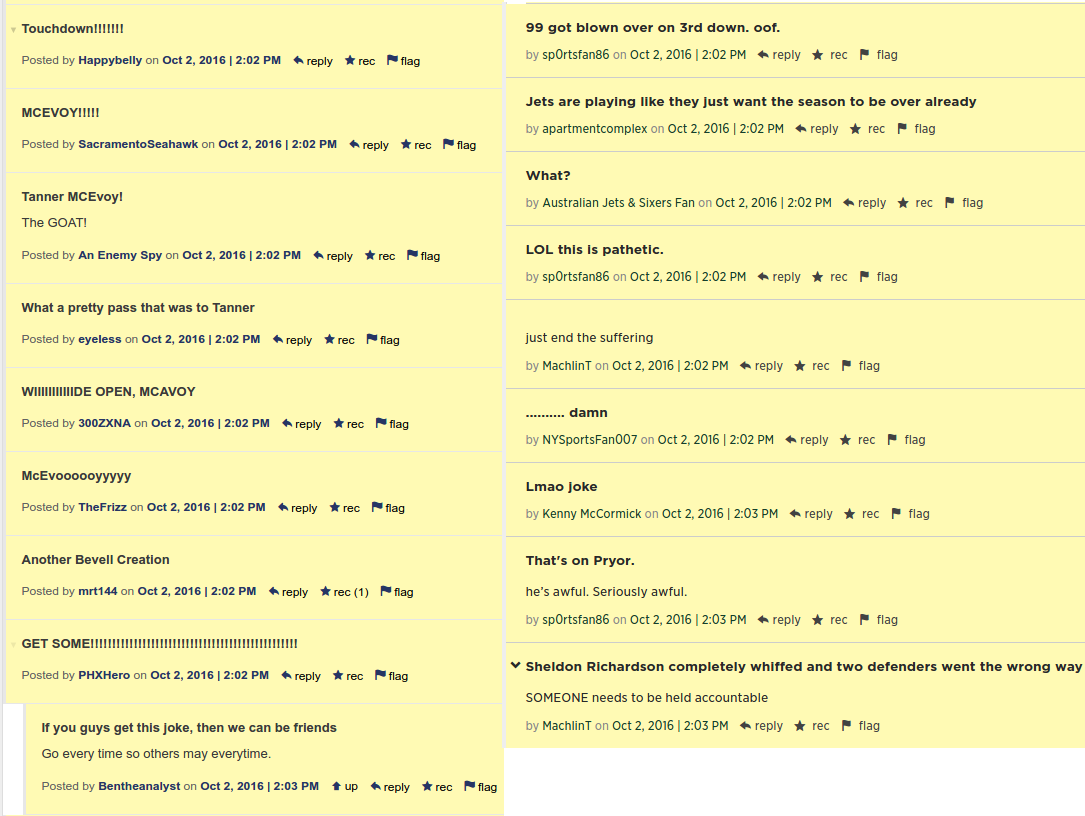 Ryan Fitzpatrick nearly throws an interception to Richard Sherman, but it's correctly overturned on review (14-3 SEA) 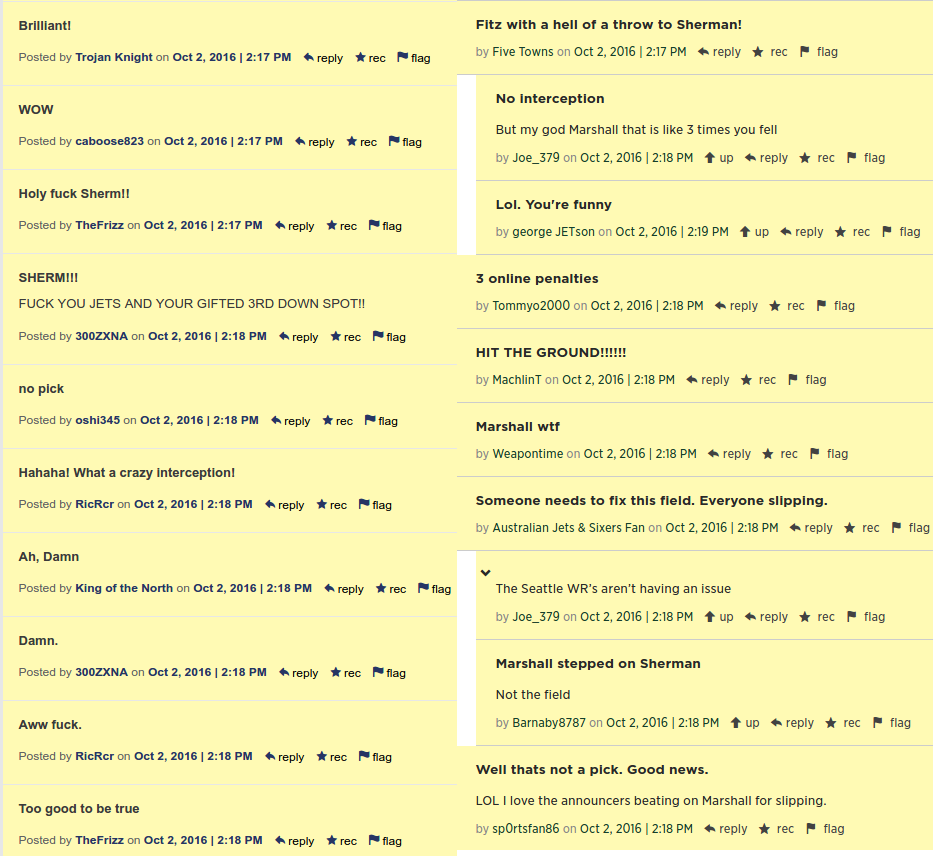 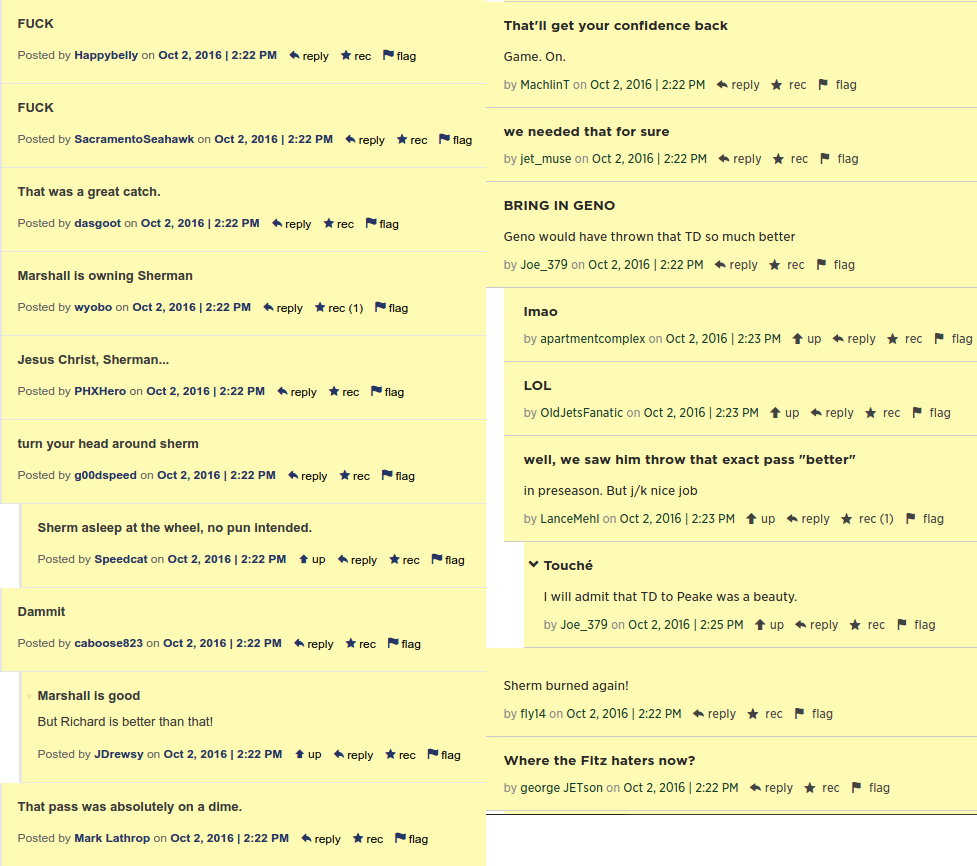 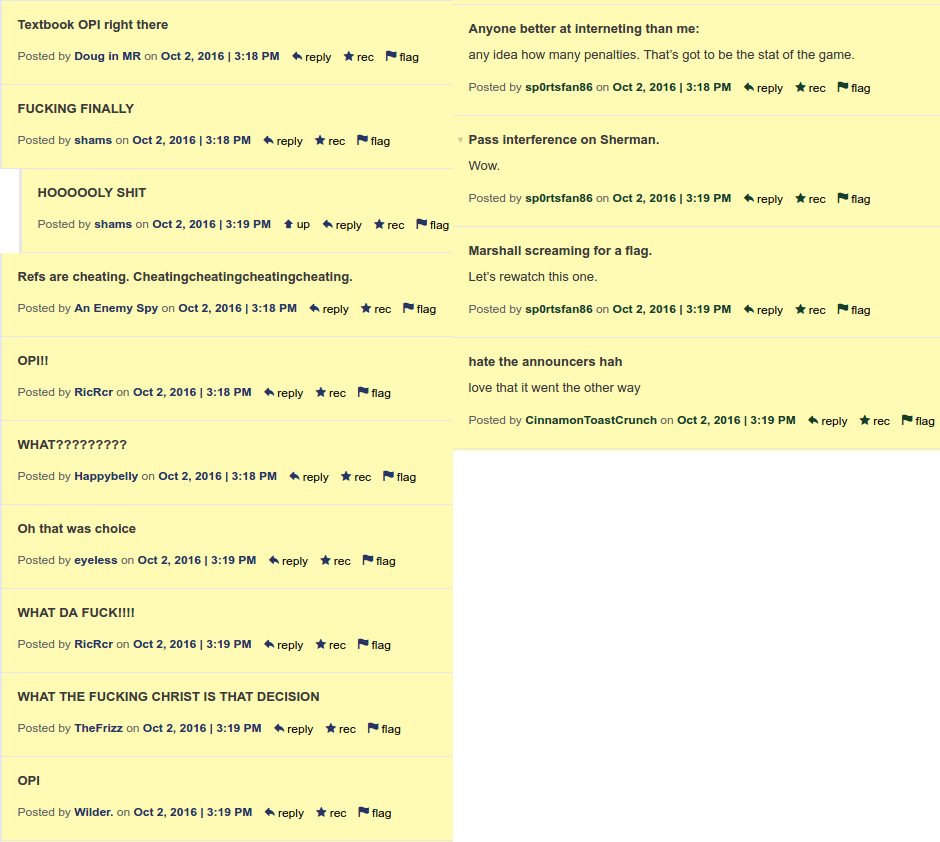 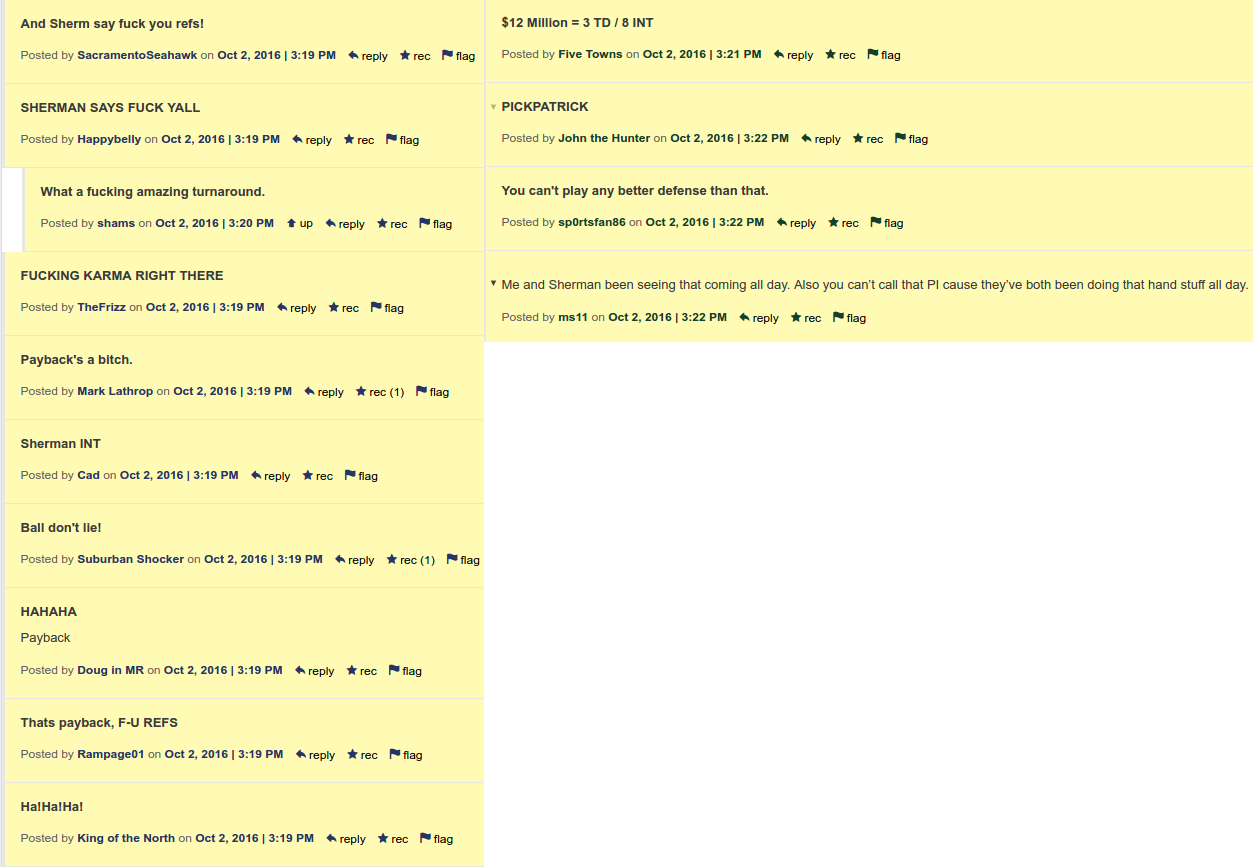 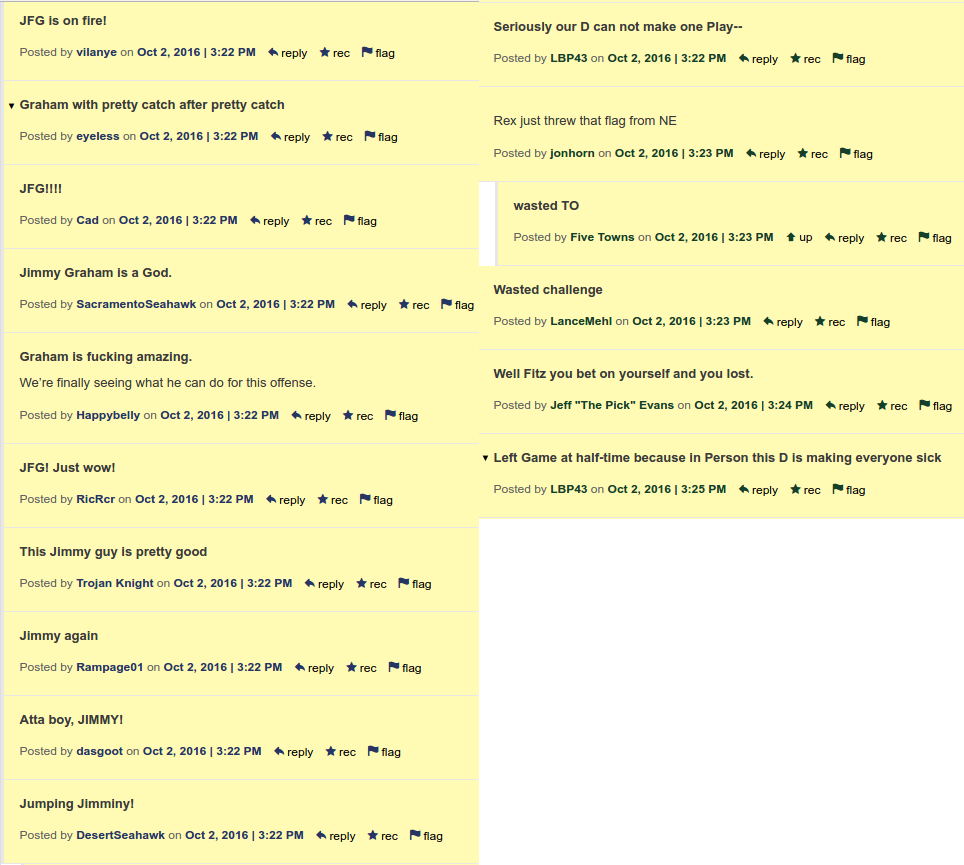 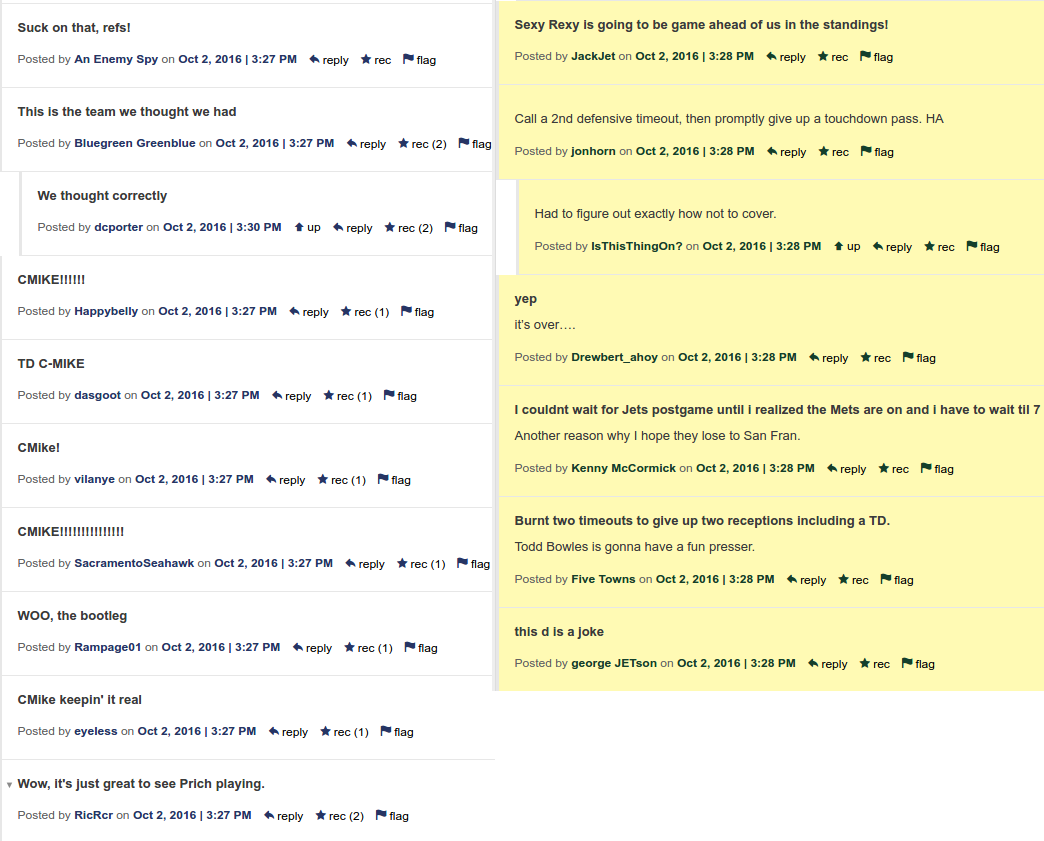 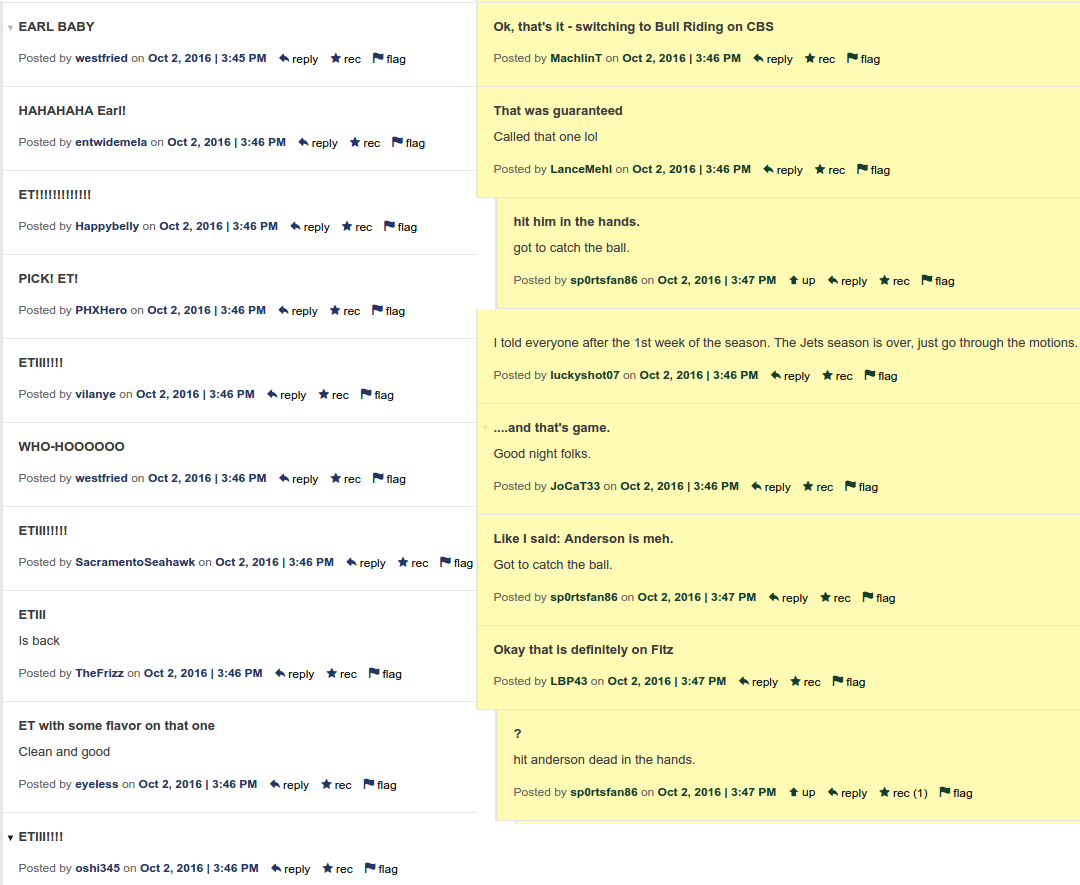 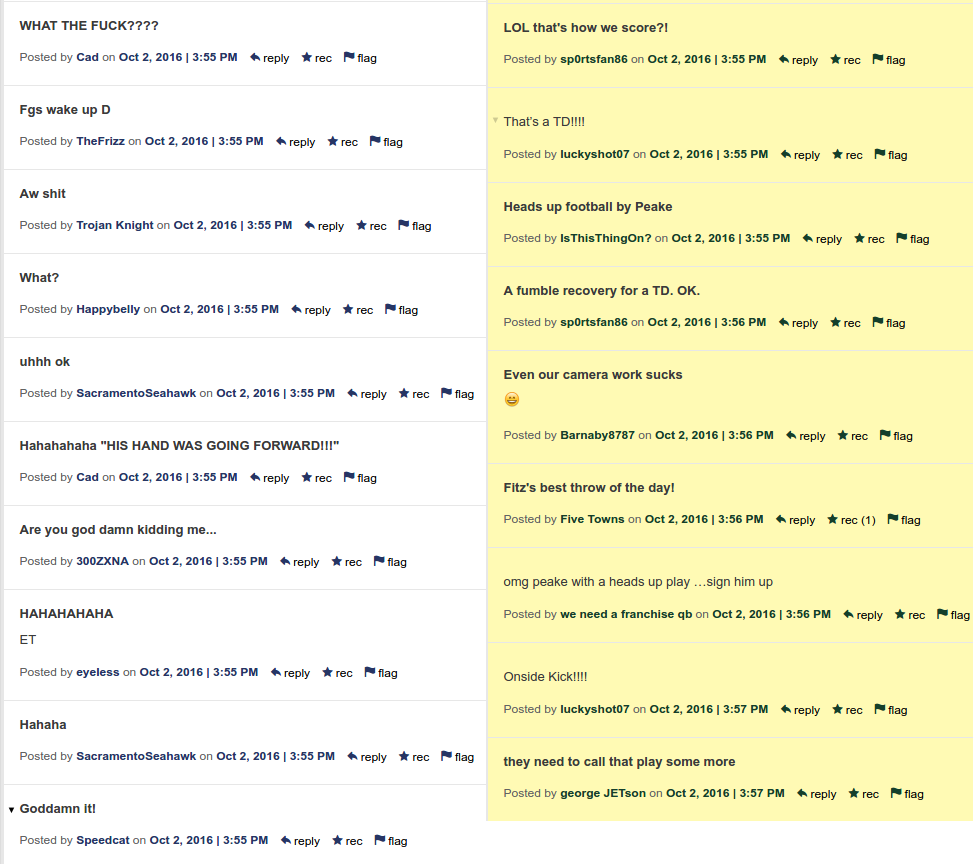 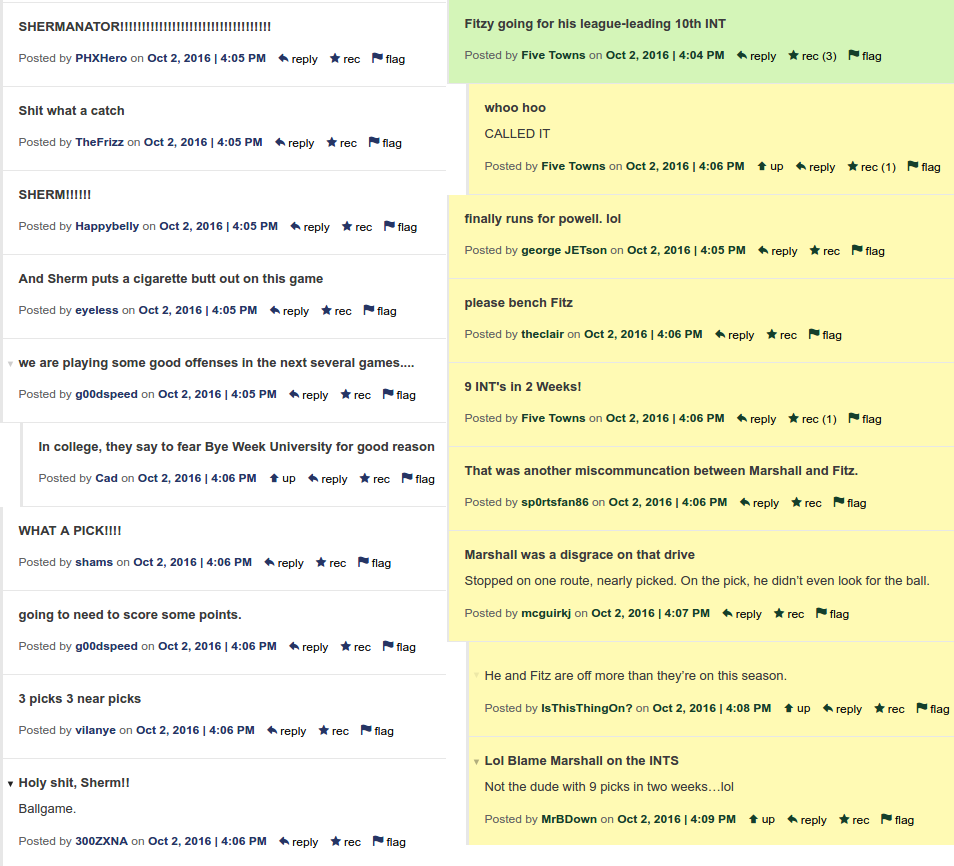 We have reached the "moon landing was staged" phase with some when it comes to defending Fitzpatrick and making excuses for him. This is not a complicated discussion, he has played terrible football. He is being paid 12 million dollars but has been worse than 2014 Geno Smith through four games. Every rookie quarterback in the NFL has been better than him, including Cody ‘freakin Kessler. Case Keenum, Brian Hoyer and Trevor Siemian have all been better than him at a much, much cheaper price. It is almost like Fitzpatrick skipped the whole offseason in protesting for even more money than he received.

In the near term, Fitzpatrick is going to remain the starter but he needs to be on a shorter leash. The Jets needed to be 3-3 through these first six games to give themselves a fighting chance over their final ten. In order to do that, they need to pull off two road wins as heavy underdogs. Arizona looks to potentially be a more winnable game than expected but Pittsburgh? That may be another story.

It is kitchen sink time for the Jets. Can they pull off an upset win with their back against the wall as a touchdown or more underdog? If they don't, we could be trending dangerously close to a 2007 or 2014 type season. - Joe Caporoso, Turn on the Jets

The truth of the matter is, Fitzpatrick is not getting the job done. Yes, the Jets are just 1-3 now but they're already in the bottom of the AFC East. The fact that Fitzpatrick was still kept inside both meltdowns in Kansas City and now at home speaks volumes that the Jets are too committed in him.

It's easy to see why since they invested $12M into him to be their starter this season to finish what he started last year. Now that he's been playing terribly, the Jets need to logically look at the situation at hand.

Surely, if they decided to go with Geno Smith or even Bryce Petty if he's healthy enough to start, it would look like a foolish move considering they didn't pay Fitzpatrick to ride the bench.

But at the end of the day, it's not about loyalty to a struggling player because of an overpaid contract. It's about putting your team in the best position to win football games.

Surely, not all the blame should land on the shoulders of Fitzpatrick these past two weeks but it's not like he's playing perfect football. He lacks arm strength, focus, and execution in the grand scheme of things. He was and will continue being the reason why the Jets lose football games. - Luis Torado Jr, The Jet Press 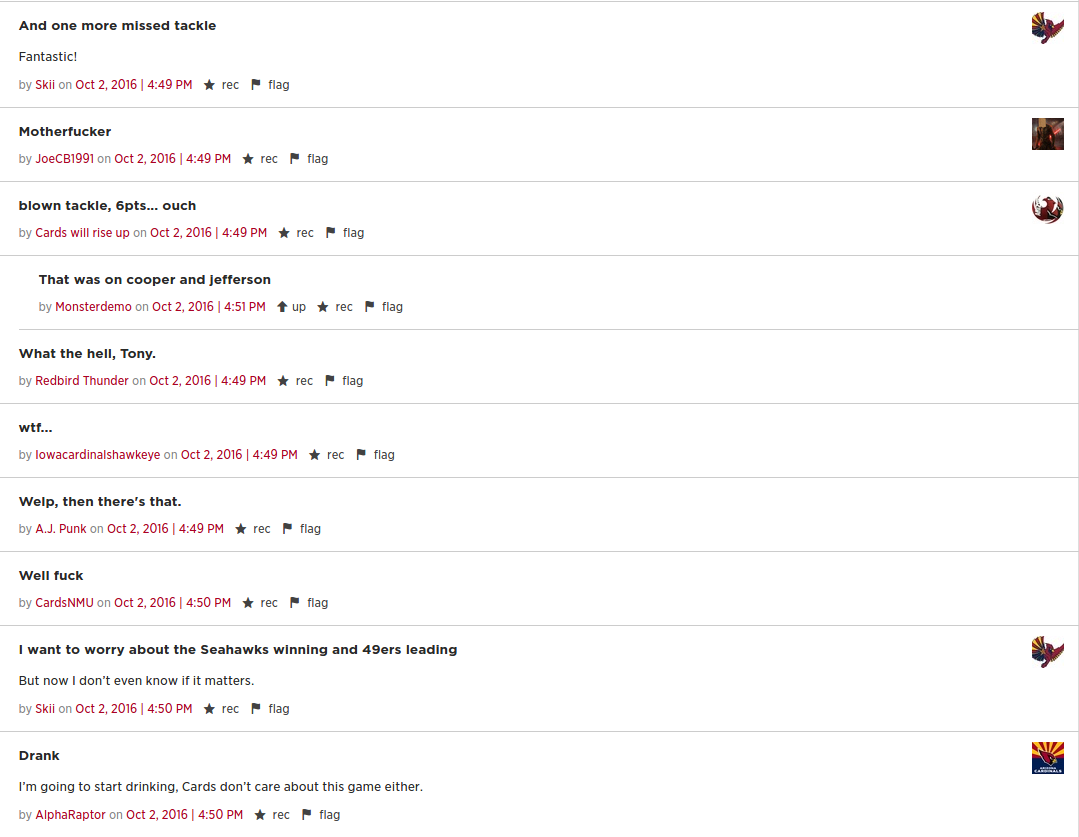 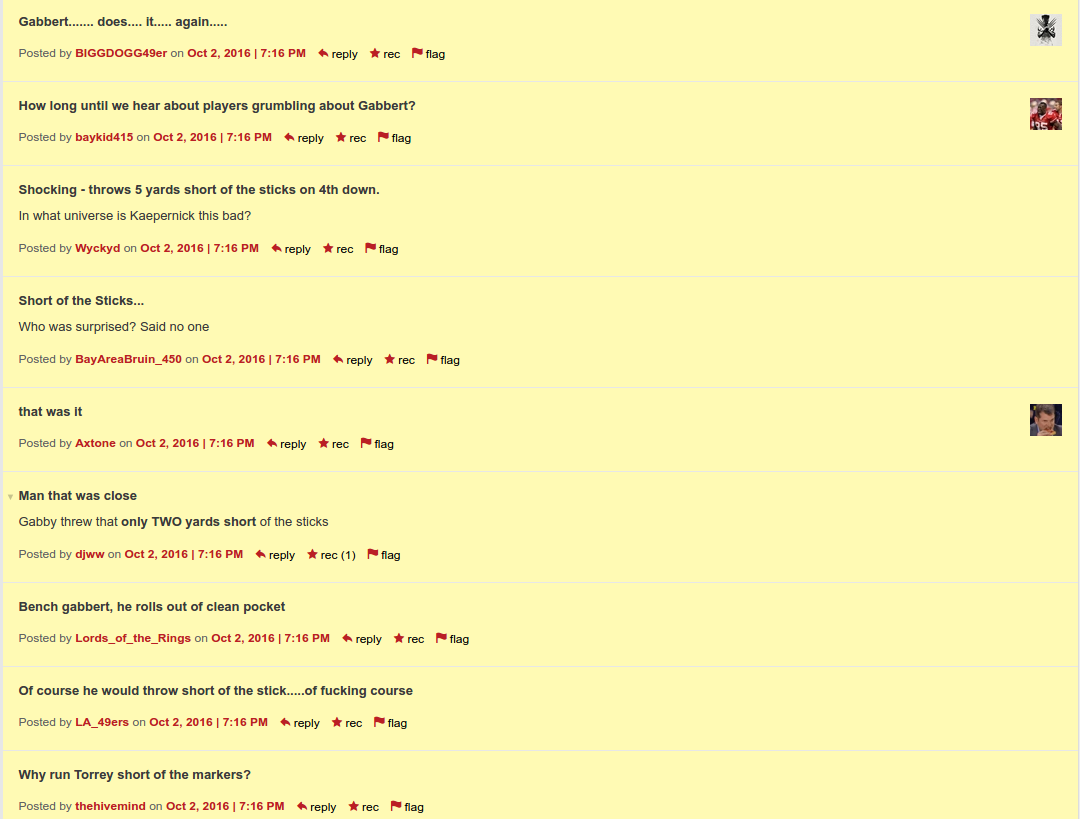 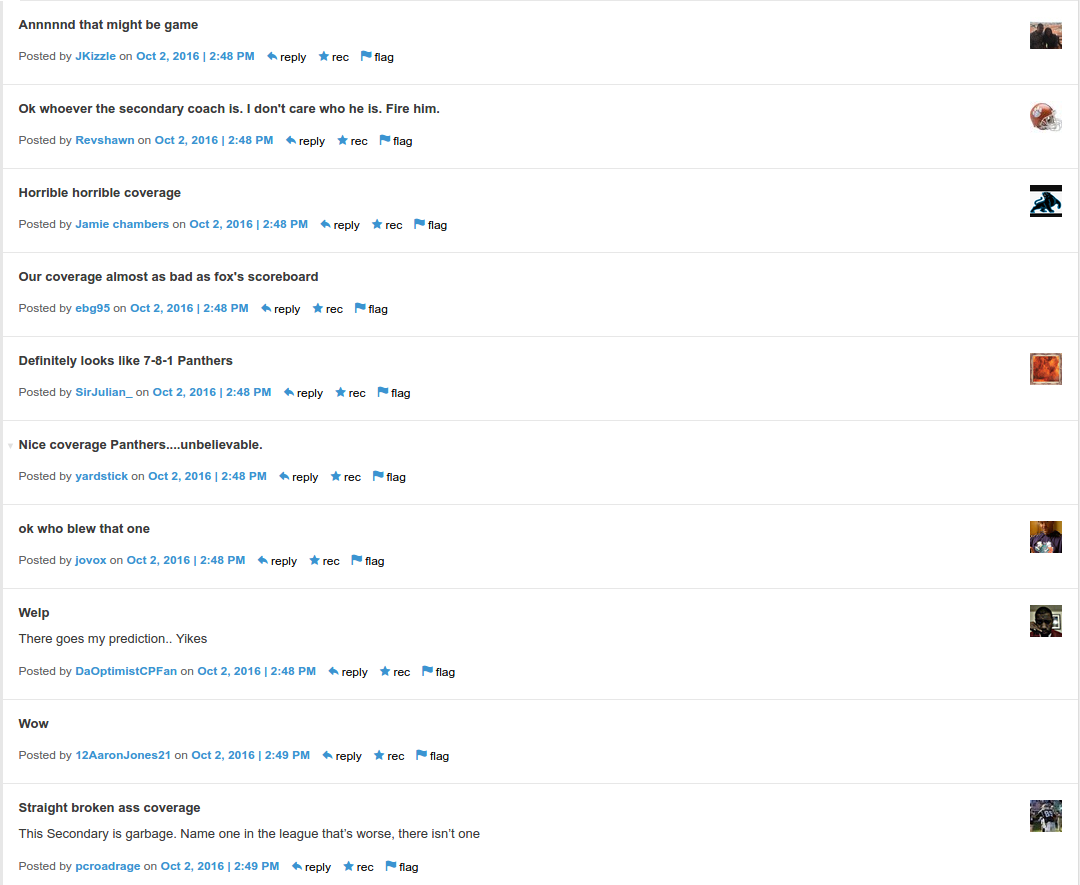 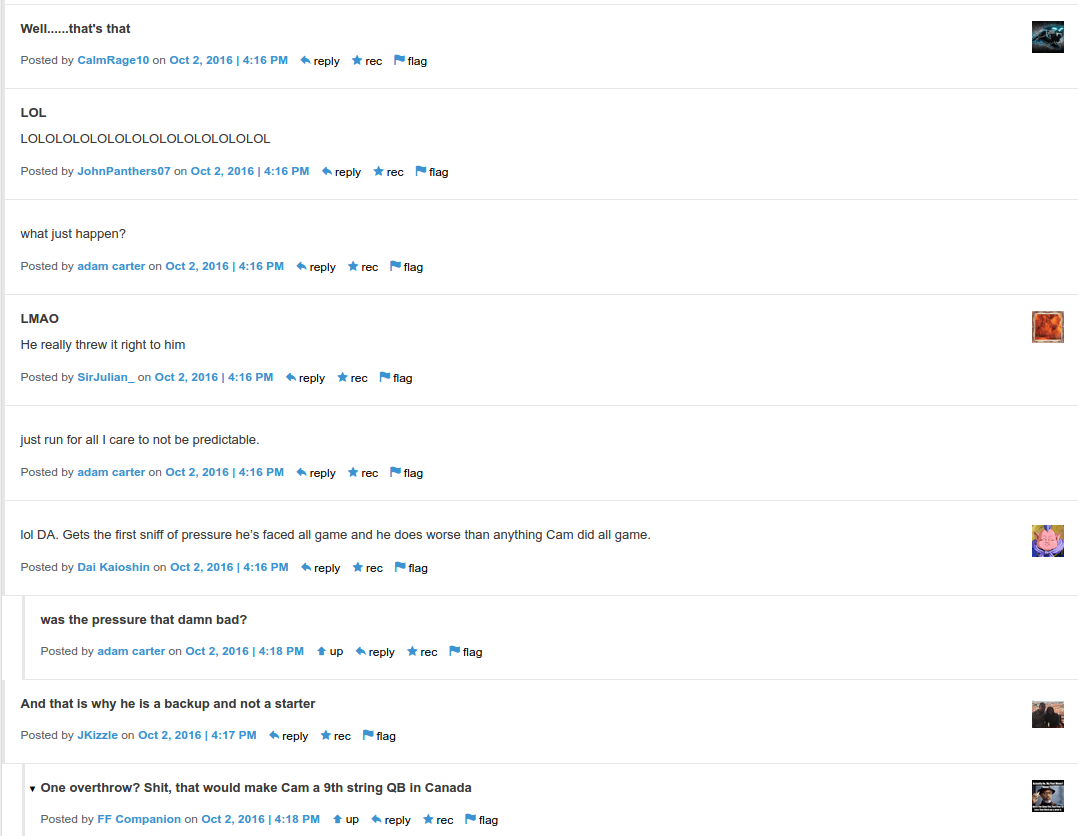 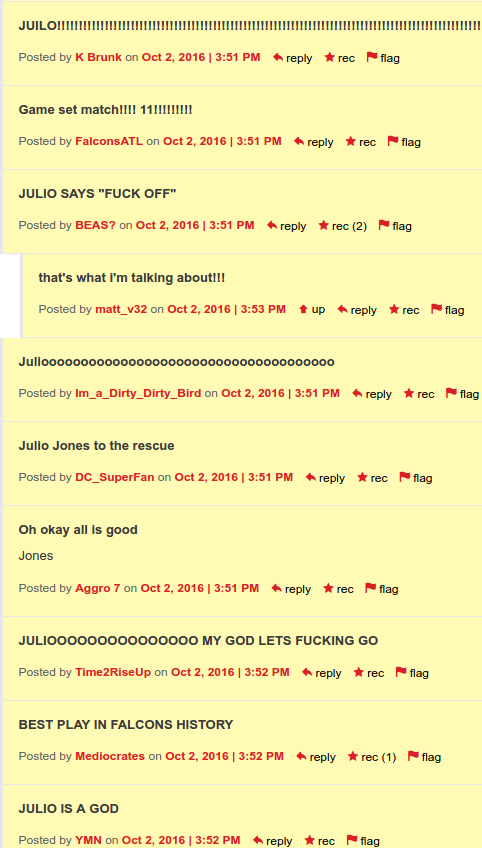 The Seahawks will be off this week, but Enemy Reaction will not be. It'll be a whiparound of the best games, best (and worst) plays, and best finishes of the weekend. Of interest for Seahawks fans will be Cardinals-49ers on Thursday, Bills-Rams on Sunday, and even Falcons-Broncos, as Atlanta is Seattle's next opponent. The Falcons have won 3 straight, look to have a prolific offense, but they'll be taking their act on the road against two of the top defenses in the league. I can't wait to see how it unfolds.