I introduce to you the beginning of Field Gulls Grades! Where everything is made up and the points don't matter! Oh wait, thats PFF grades, which is what Field Gulls Grades is in response to, since we all know how frustrating PFF is.

First of all, all grading is subjective just based on the eye test, and using my football experience and common sense to determine the level of success on each play for the player being evaluated on an individual level and their impact on the teams success for the play as well.

Criticism is welcome, but if you're going to criticize, be ready to offer solutions. The goal here is for our community to contribute, and help evolve and fine tune the grading system and even contribute to weekly posts. Initially I'll try to do a couple posts a week, but due to my work schedule that might not always happen, and I encourage anyone else to step up and do some grading.

Also this is my first time doing a Fan Post with images, so if something ends up funky, just let me know how to fix it.

NFL GamePass is used to review game tape, and I'll try to use the All-22 as much as possible. This week for Justin Britt, I used the broadcast film last night as the All-22 wasn't ready yet, and this morning used it to get a few snapshots of a few plays.

Starting off we're going to try two different grading scales, but the methodology is essentially the same.

The first scale is called PFFFF (because pfffftttt, why not, PFF does it?) and grades players from -1 to 1.

The second scale is called Field Gulls Grade, or FGG for short and grades players from 0 to 1.

The scores of all plays will be added together, and then divided by the number of total plays to get to the final grade.

***If for any reason this grading system is used for or as a basis to generate income, you must credit Field Gulls community as the original contributor and you owe me 1,000% of gross income

On to the tape! Here's the play by play breakdown. 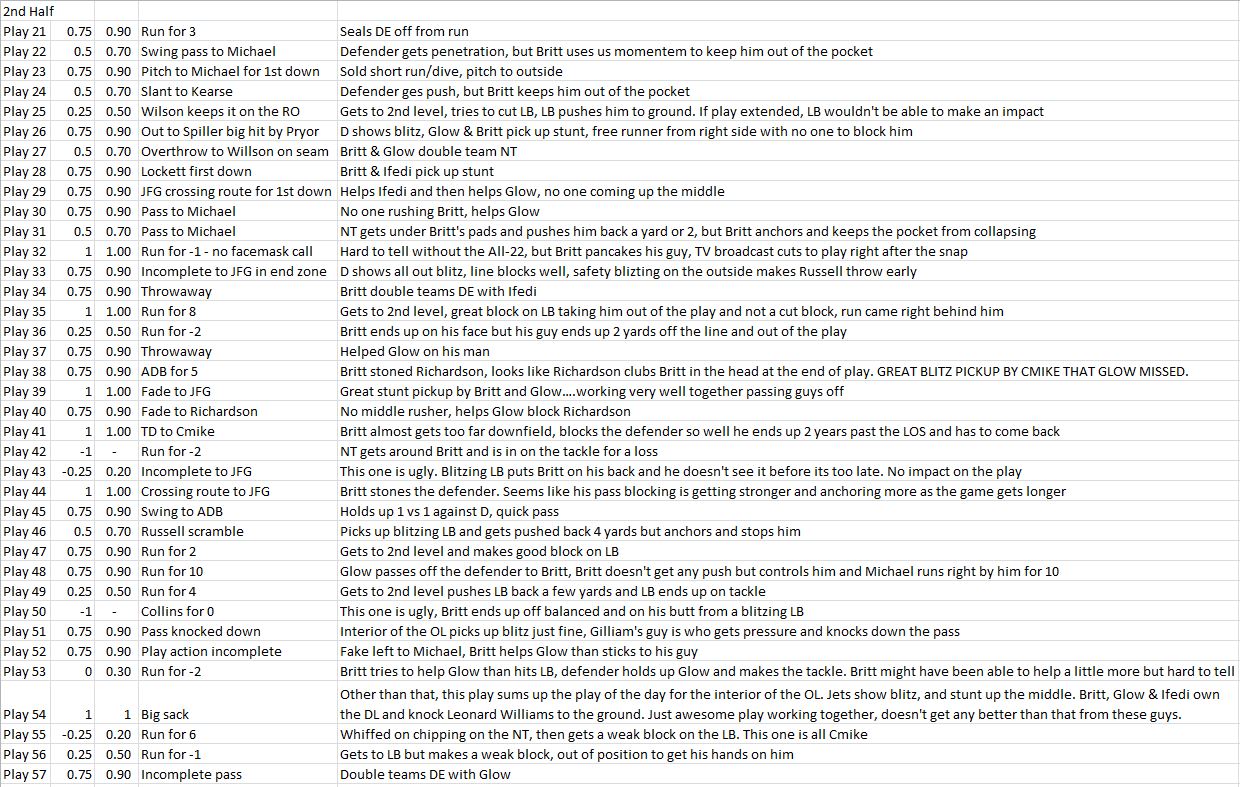 A few plays I want to highlight. 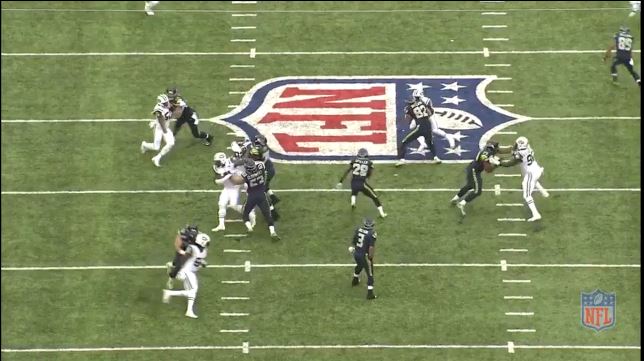 Look at that alley right up the middle. Britt is at the top of the screen on the left, blocking the LB. One thing that jumps out on the screen with Britt, is how great he is at getting to the 2nd level. Willson's defender ends up shaking loose and Spiller goes right behind Britt. Richardson comes flying in and blocks the safety over the top allowing him to get a few more yards.

Play 10: CMike for a couple yards 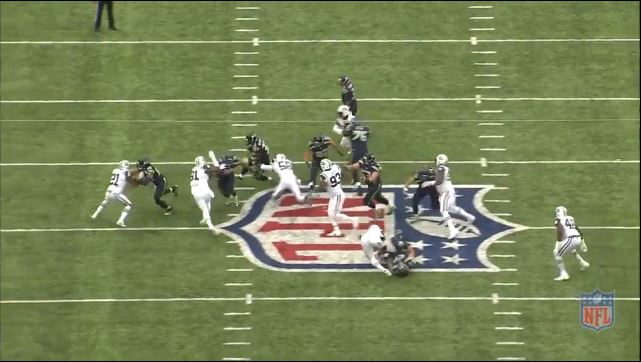 You can see Britt on his back, but it was a great cut block. Wasn't done dangerous from the side, but from straight ahead taking out the LBs legs, removing him from the play. 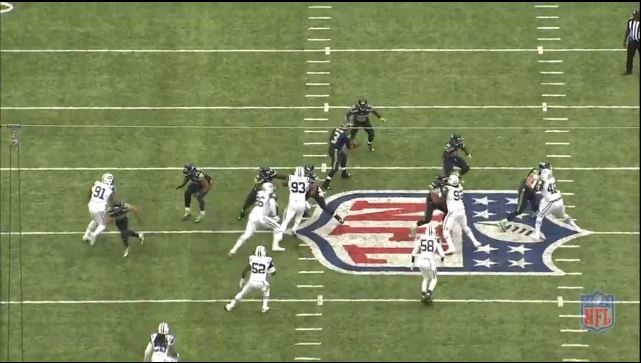 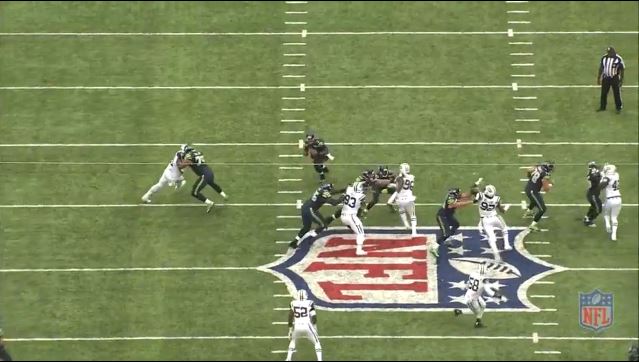 #96 stunts over the top of #93, then #93 tries to penetrate the space that Britt was in, expected him to be moved out from carrying #96. Britt does a great job of passing #93 to Ifedi and Ifedi sticks with him, but Britt doesn't forget about him and only go with #96. As #96 stunts around, Britt keeps a hand on #93 helping Ifedi and they both use the defenders momentum to push them around the pocket, allow a huge lane for Russell to step in and throw the bomb to ADB. CMike helped pick up #96, but honestly Britt didn't need it. This is the kind of stunt our DL runs and is very successful at it.

Play 12: CMike for a couple yards 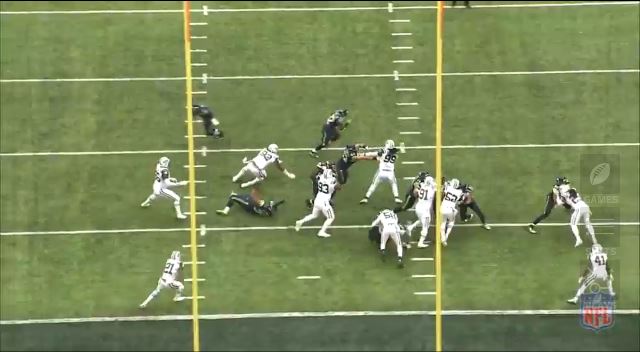 Another cut block on the LB

This play gets blown up by Glow losing, but Britt does another good job at cutting the LB. He doesn't get him to the ground but takes him out of the play. If Glow gets his block, the LB can't pursue, and it's CMike 1 on 1 vs the safety #41. 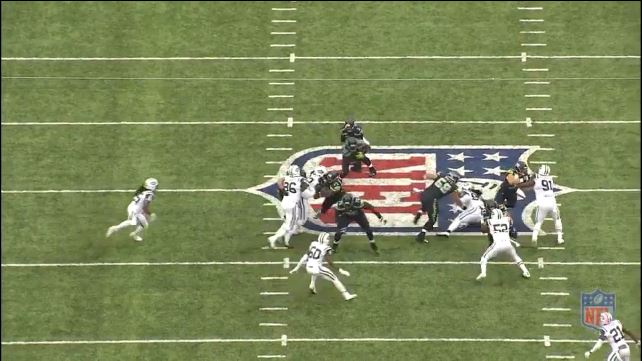 We all know Britt is a good run blocker right? Because I'll tell you what, I thought he was just "good", even though as a team we didn't run the ball well, this play and several others had me thinking that he's "really good". He flat out pancakes the defender who I think is Wilkerson. He doesn't just knock him to the ground, he piles right on top of him as well. This is why Tom Cable loves him. CMike got a 1st down on this play running right behind Britt, great hole. 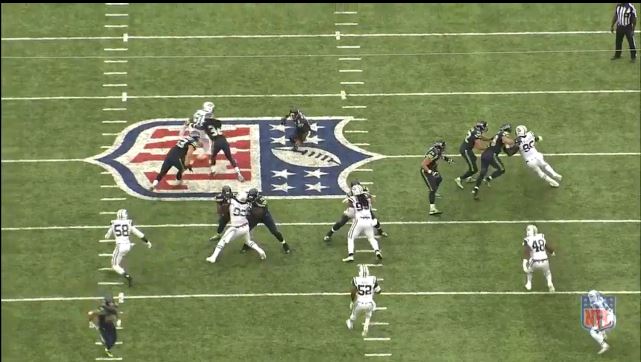 First thing I want you to do, is look at the entire OL and what their assignment is. Did you notice that Britt is the only one that is 1 vs 1 with the DL? Watch the play live, he literally gives up NO ground on this play and stones him cold. Everyone else has help, and if Britt doesn't hold his ground here, Russell won't have a pocket to step up into and fire deep for the TD to McEvoy. 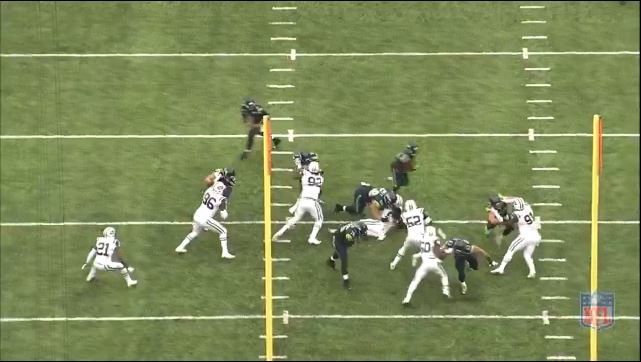 I don't know about you, but that looks like a dominant run blocking C that is just owning his guy, who happens to be a Pro Bowler. 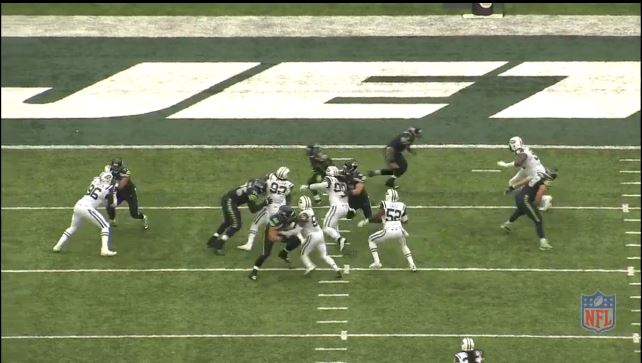 Is that a beautiful hole for CMike to run through or what? Here Britt gets to the 2nd level so fast that he doesn't even have to cut block the LB, he just is straight up on him. Ifedi does a great job sealing of his guy and Gilliam does just enough for CMike to get by him. 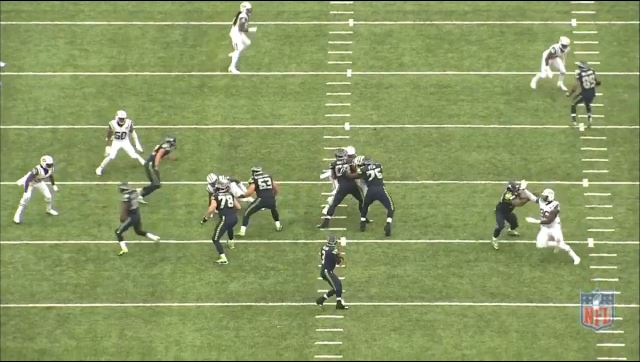 A thing of beauty

This is probably my favorite play after rewatching the game several times, even though it was a sack. Gilliam got beat around the edge by a guy that shouldn't be able have the speed to do that. However, look at the rest of the OL and what do you see? A wall of blue is what I see. Britt is owning his guy with Ifedi chipping in, Glow knocked his guy down who happends to be Leonard Williams and Sowell is ready for what they thought was a blitz. This play sums up the interior OL play.

For the PFFFF grade, being that it's on a -1 to 1 scale for each play, a final overall score of 60% is pretty good. I only had a total of 4 negative plays for Britt.

For the Field Gulls Grade, he came out at 77% which is pretty freakin' good. This isn't high school, where average is just assumed to be a 70-75%. Britt had 52 out of 57 plays where he was graded at "Winning ugly" or greater. 91% of his plays, he did what he was supposed to (at varying degrees). It doesn't get much better than that, especially against a DL that has 2 Pro Bowlers and 2015 Top 6 draft pick. Color me impressed.

2: We thought Glow is pretty strong right? Well Britt held down several blocks with only 1 arm.

3: Our interior OL is awesome. They aren't perfect and have their issues, but they are definitely starting to turn into a strength for the offense. Glow-Britt-Ifedi all work great together. They double team well, help/chip well, and pickup/pass off stunts well.

4: Ifedi is a huge upgrade from Webb, but we all know that. It's clear that the coaches and Britt trust Ifedi one on one. This allows Britt to help Glow more.

5: Gilliam's strength was supposed to be against speed rushers. Well he got beat several times around the edge by 3-4 defense ends, not smaller guys like Robert Quinn, but bigger almost 300 lb guys that shouldn't be able to do that.

Bold Prediction: If Russell keeps this kind of passing up, and our run game gets back to what we're used to, I can see Britt easily being a Pro-Bowl center. I highly doubt he would get voted in just because he doesn't have that name recognition, but check this out. Through 4 games Russell has only been sacked 9 times (and a couple of those being on Russell). Last year at this time he was sacked 18! times. Britt is one big reason why that number has improved so much, Russell now has a pocket to step up into. Justin Britt is who we all wanted Patrick Lewis to be. 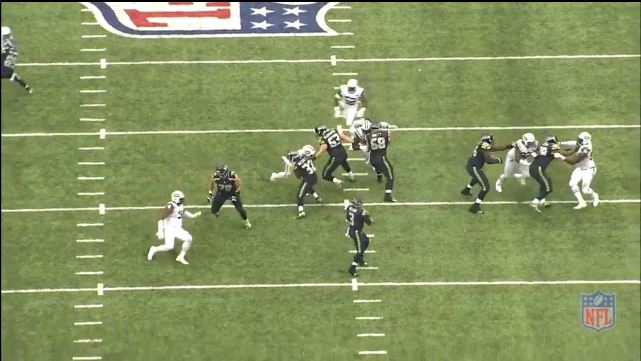 Is CMike an every down back? I say yes after Sunday's game. We know he can run the ball, he showed us he can catch the ball, and now he's picking up blitzes, and when I'm saying picking up, he's laying the wood on defenders, flat out hitting them unlike most RBs at almost a Marshawn Lynch level. This play the Jets DL did a stunt with a blitzing LB. CMike steps up into the pocket and keeps it clean for Russell. Glow wasn't fast enough to pick him up, so if he didn't Russell would have been sacked, hard.

So what does everyone think? What do you like or not like about the post, what can we focus on more or less? Also, if you want to see my review of Sowell and Ifedi without grades, check out my posts in yesterdays C&C thread.

Also, who should we look at next?