How about this bye week huh? So much stuff going on...OBJ throwing temper tantrums, looking at the matchup of Julio Jones vs Richard Sherman, and now trying to figure out if Jimmy Graham can block.

This is now the third installment of Field Gulls Grades, you can see the first two here and here.

We all know that Jimmy Graham is a mismatch nightmare and is blowing us away by having two straight weeks of over 100 yards receiving just 10 months after rupturing his patellar tendon. During that uncertain time of wondering if he'll get back to his old self, nobody even thought about him blocking, only about him running down field and catching the ball.

Two things we do know.

1: The Saints never asked him to block

2: Last year he was inconsistent as a blocker

Per the request of our own Mr. Fraley, let's take a look at how his blocking was this past week against the Jets.

But first, let's get the pleasantries out of the way.

Another change/addition to the grading system. It was requested in the last post that we add a simpler grading scale, and here it is, the famous K.I.S.S. (Keep It Simple Stupid), or if we keep it going forward, Field Gulls Grading Basic or FGG 2.0 or whatever moniker everyone wants to call it. Ya'll pick. Regardless, any win is now a 1, stalemates are .5, and any kind of failure, regardless of degree or impact on a play is a 0. So this is pretty much just a success/failure rate metric, which might just be the easiest going forward, let me know what everyone thinks.

***If for any reason this grading system is used for or as a basis to generate income, you must credit Field Gulls community as the original contributor and you owe me 1,000% of gross income. (I'm still not any closer to retiring, pick up the slack folks!)

On to the tape! Here's every block, or missed block by Jimmy Graham this week. 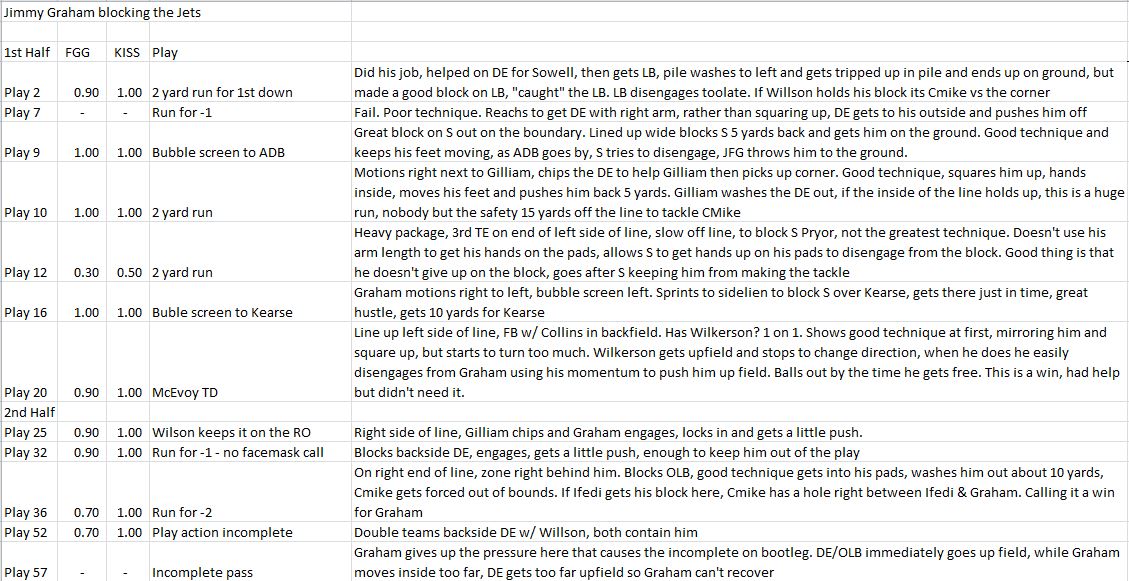 There was only a total of 12 plays that he was asked to block, so here's some video for you to take a closer look

Play 2: Michael 2 yard run for a first down

Gets the block done but he "catches" the LB rather than blocking him, but still gets the job done. Got caught up in the pile and tripped over Luke Willson.

Here I don't know if he's supposed to lead into the hole and Willson is supposed to get the DE, or if he's just trying to get inside leverage on the DE. Either way, it's a fail. I think Willson would be the lead block into the hole and Graham just takes 1 or 2 too many steps inside, doesn't square up and the DE easily sheds the block.

Out in space against a smaller quicker defender, gets good technique, locks in while squared up, moves his feet. Shows some physicality and does what he's supposed to do to guys smaller than him

Good solid block here. Chips the DE to help Gilliam then moves to the corner. Gets his hands on him and pushed him back 5 yards or so. Solid block.

Technically I'm calling this one a stalemate. Kind of a weak effort here, very slow off the line, lets Pryor get his hands on him first to shed his block, but Graham does just enough to keep him from making the tackle. If Britt and Sowell get their blocks, its CMike vs #41 and a possible TD

Probably the best block by Graham all day, great effort and hustle here to get out to the boundary. Gets there just in time. I really like this play call. A couple times in the game Graham lined up out wide like a receiver in the middle of a trips bunch. I'd love to see him and Kearse out blocking for Lockett or Baldwin on a WR screen or bubble.

Good block, not great, but gets the job done. He has Wilkerson 1 on 1 here, but obviously has help from both Willson and Sowell if he needs it, and luckily he doesn't. He starts off well, good initial punch to get square and mirrors him well. As he gets deeper past the pocket he starts to turn his hips, and then Wilkerson stops to reverse direction and easily disengages from Graham. A LT here would have the awareness of how deep he his and be ready for a possible move back to the inside, but a TE that only blocks 12 times a game? I'm not worried about it. He did a good job and held his own as long as he needed to.

Play 25: Wilson keeper on the RO

Nothing much here, as he's on the non-play side and has help from Gilliam, but just noticed how he starts his block with good technique, hands inside the pads and squared up to the defender.

Not a huge block on the non-play side, but engages, gets a little push and keeps the defender from pursuing. I like how he moves laterally first to get square on the defender rather than just going straight forward at the outside shoulder. If he did the defender would shed him pretty quick.

Here Graham does a good job getting into the OLB on a zone right that should go right off his butt. He gets good leverage on the OLB and washes him out sideways 8 yards or so. If Ifedi gets his block, Gilliam gets the inside LB, then Willson on the the other inside back pursing, it'd be a great run play. At first look I thought this was a failed play by Graham, but he's actually 1 of the only ones that actually did his job.

Graham started the game off with a good block, and finishes it off with a terrible one, if you want to call it a block at all. Nothing terrible that isn't easily correctable, he just steps too far inside right off the bat. The DE sees Wilson on the sprint out and heads up field immediately, which Graham can't recover from and forces the hurried throw by Wilson. 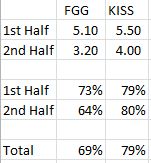 Graham had a total of 12 plays that he was asked to block, and I only recorded two plays that he failed. I think his Field Gulls Grade of 69% is more reflective of his actual performance, as he had a several plays where he just did his job, a couple that he did it well, and a couple that he struggled to do it but still did it and one stalemate. However, just looking at his success rate of whether he did his job or not, 79% is pretty accurate.

1. Graham blocks well in space. If he doesn't get squared up on a smaller defender, he uses his strength to re-direct them.

2. When he is using proper technique he can handle defensive lineman. His long arms and good footwork allow him to stay square and moving. One thing I did notice, when he does well, he's either squared up and has a good base, or he at least has his hips in the right direction with his feet moving. When he fails, its usually because his hips aren't lined up to give him a chance to be square, or he stops his feet.

3. I LOVE having Graham blocking on the quick screens to the boundary, great play calling by Bevell

4. Graham played a total of 40 out of 60 offensive snaps, and spent 12 of those blocking. So he was asked to block on 30% of his snaps, which I think is right around the right number. Helps keep the defense honest when he's in.

So I have two failed blocks, and a third as a stalemate, to make it easy, let's just call it 3 failed blocks. He didn't have any drops, and I assume he ran all the right routes. So that equates to a failure rate of only 7.5% of all his snaps....wait a second wait a second that doesn't sound right....way too negative, we know how positive Pete Carroll is all the time. Let's try this again.

Sorry for yelling, but I'm just amped up about Jimmy Freakin' Graham!

So can Jimmy Graham block? Yes, why yes he can.

This was my first pass on creating gifs from video which is a bit of a hassle so bear with me, they'll get better as we get going.

What's next? I'm knocking these out much quicker than I thought.