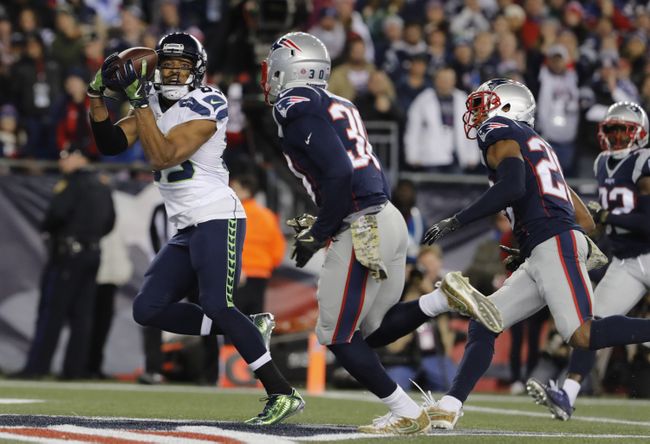 I've had this game circled on my calendar since the day the schedule was released. Winning against the New England Patriots in the regular season doesn't (and at least for me, will never) make up for what happened in Super Bowl XLIX, but damn it sure feels great to see the Seahawks go to Foxboro and get a 4th quarter come-from-behind win against the almighty Patriots in front of a huge national television audience. The Seahawks have now gone 2-for-2 in regular season matchups against New England in the PC/JS/RW era, with Russell Wilson throwing 6 touchdowns to 0 interceptions, 4 of them going to Doug Baldwin.

Certain games call for Enemy Reaction to go up on Monday instead of Tuesday. This is one of those occasions. It was a highly competitive, heartstopping, back-and-forth thriller in which neither team led by more than 7 points, and this time, it was the Seahawks who won the game with a defensive stand at the 1 yard line. That means plenty of screenshots from the game threads of Field Gulls and Pats Pulpit. Let's get this rolling!

Kam Chancellor interferes with Rob Gronkowski, LaGarrette Blount punches it in on the next play (7-0 NE) 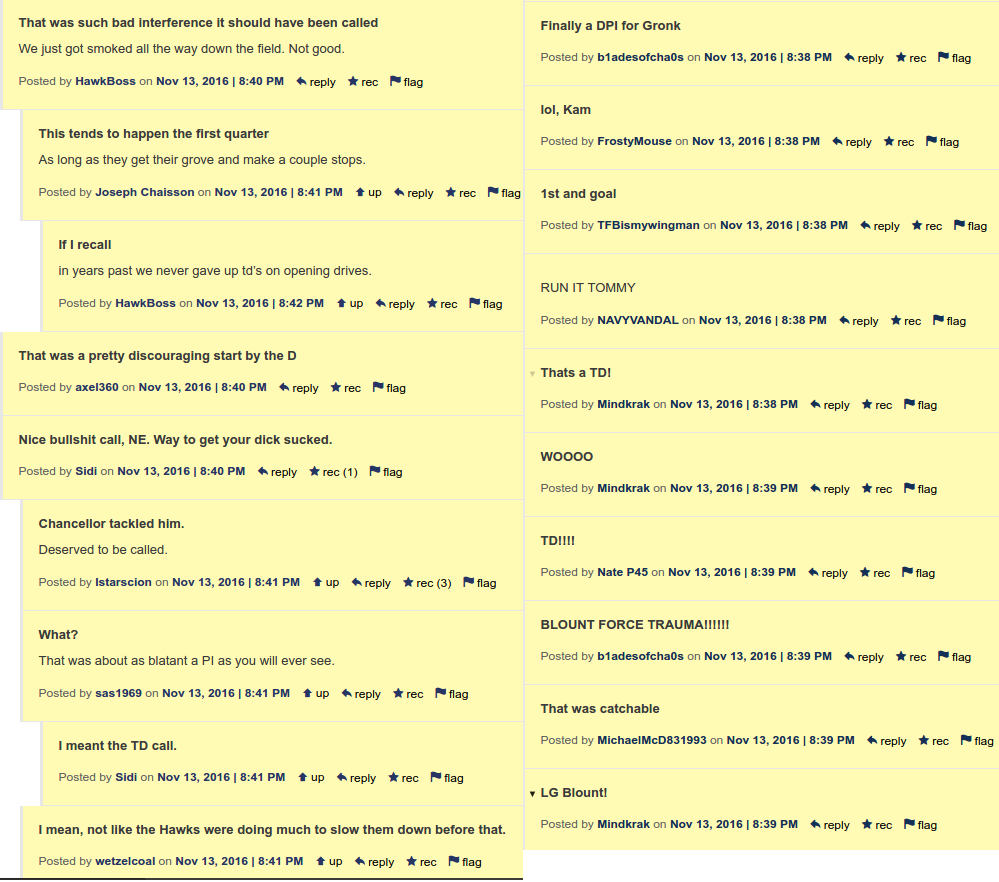 Jermaine Kearse drops a pass near the goal line, Seattle settles for 3 (7-3 NE) 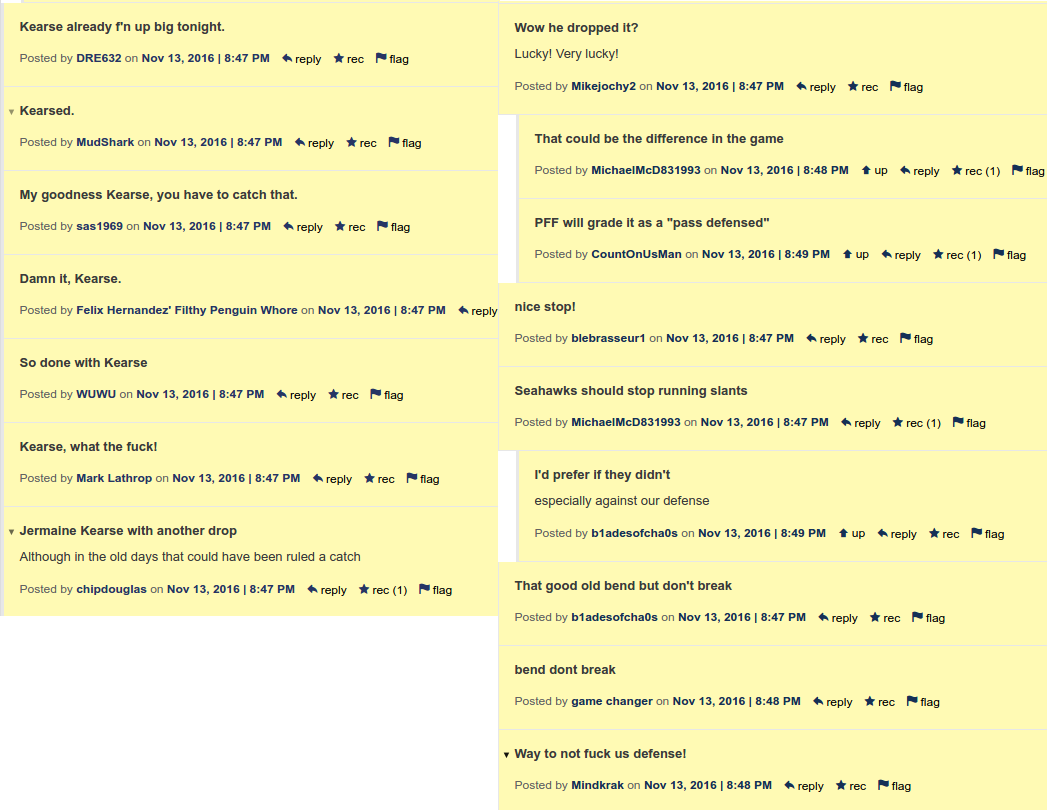 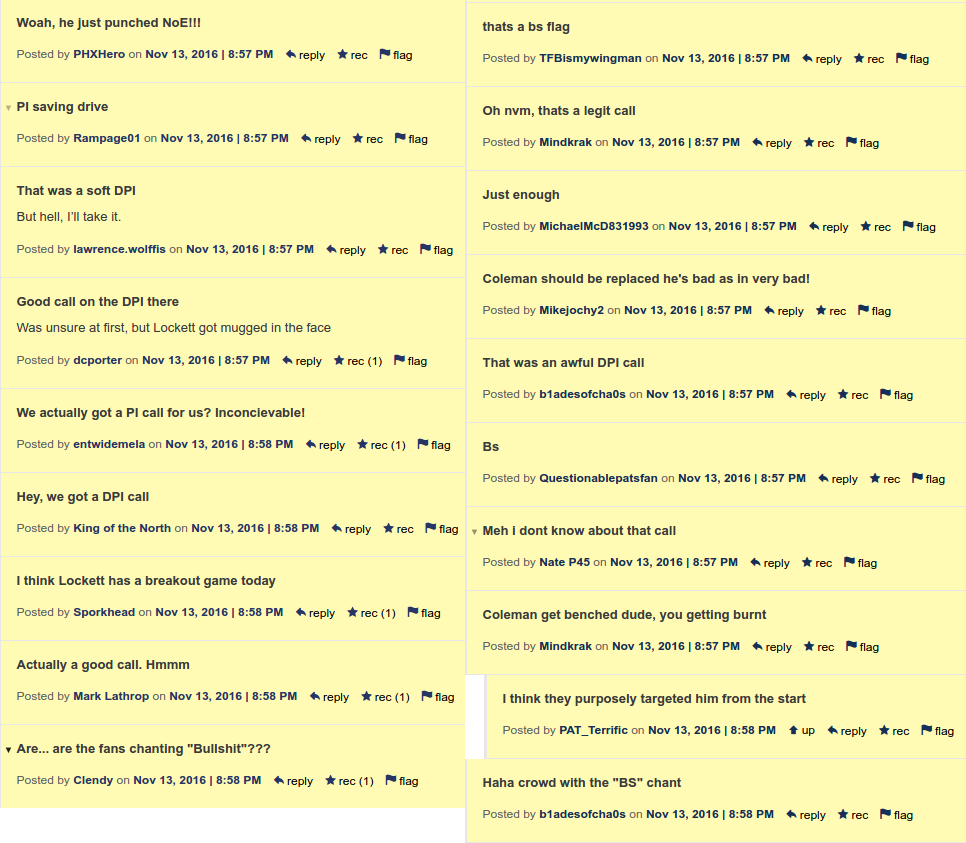 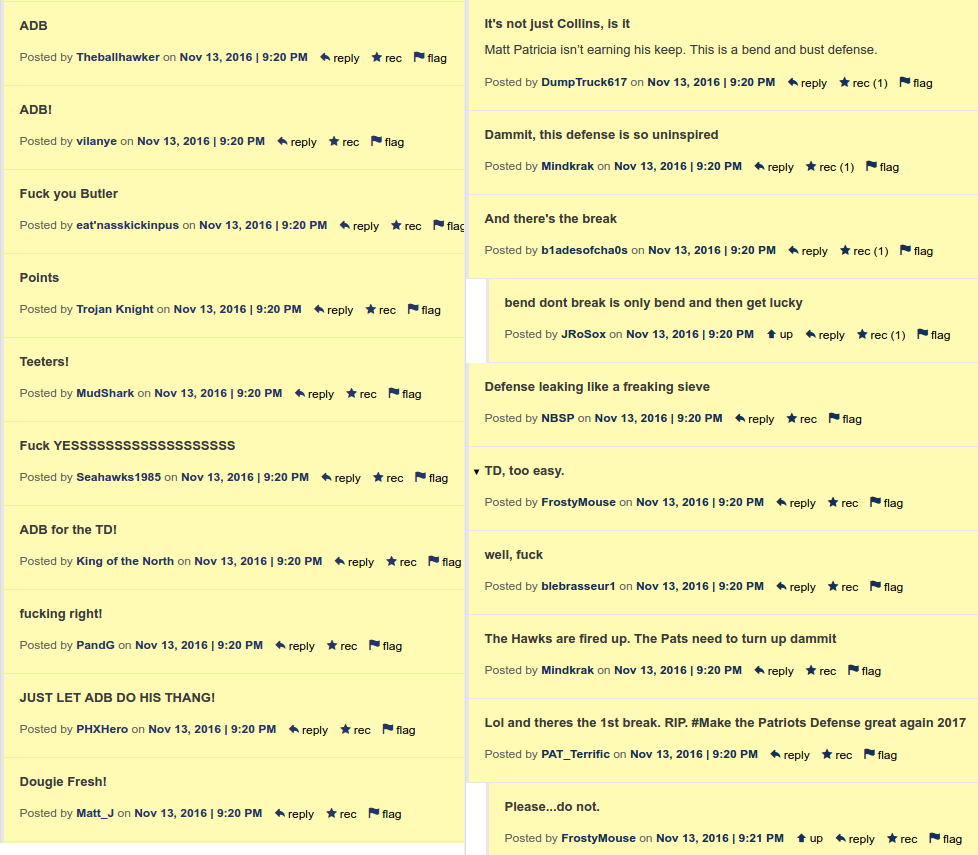 After Gronk fumble is correctly overturned, Tom Brady throws up a duck and DeShawn Shead easily picks it off (12-7 SEA) 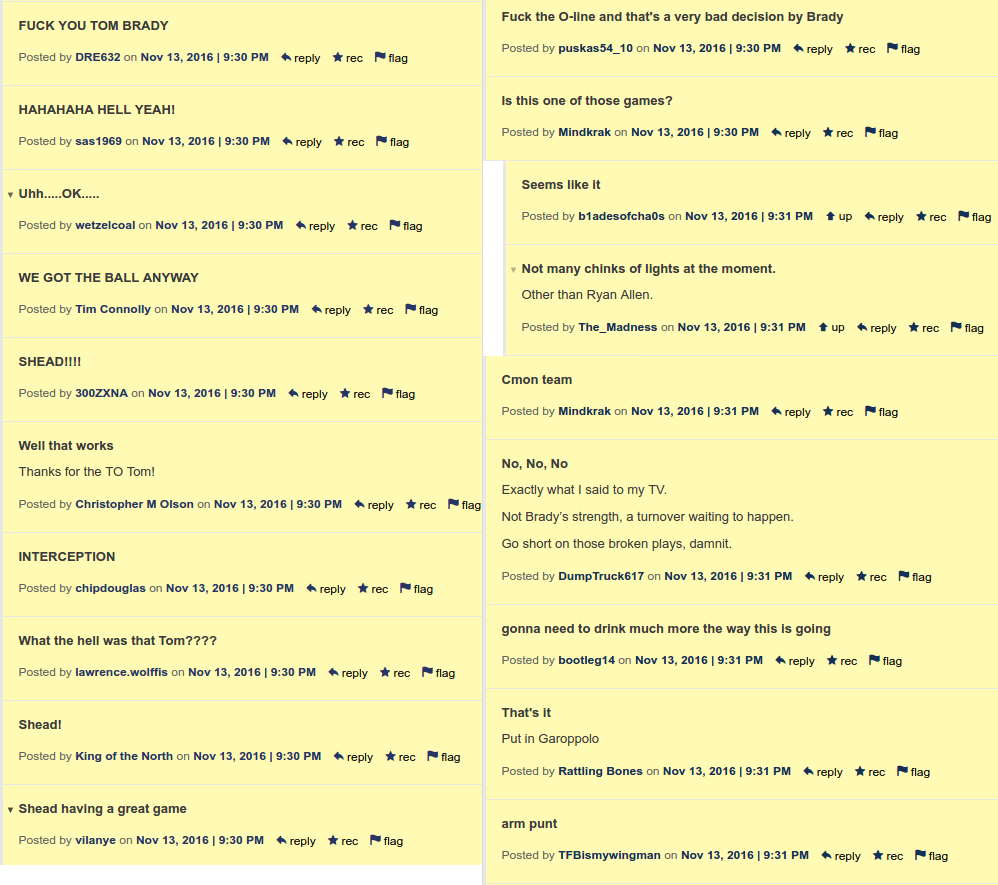 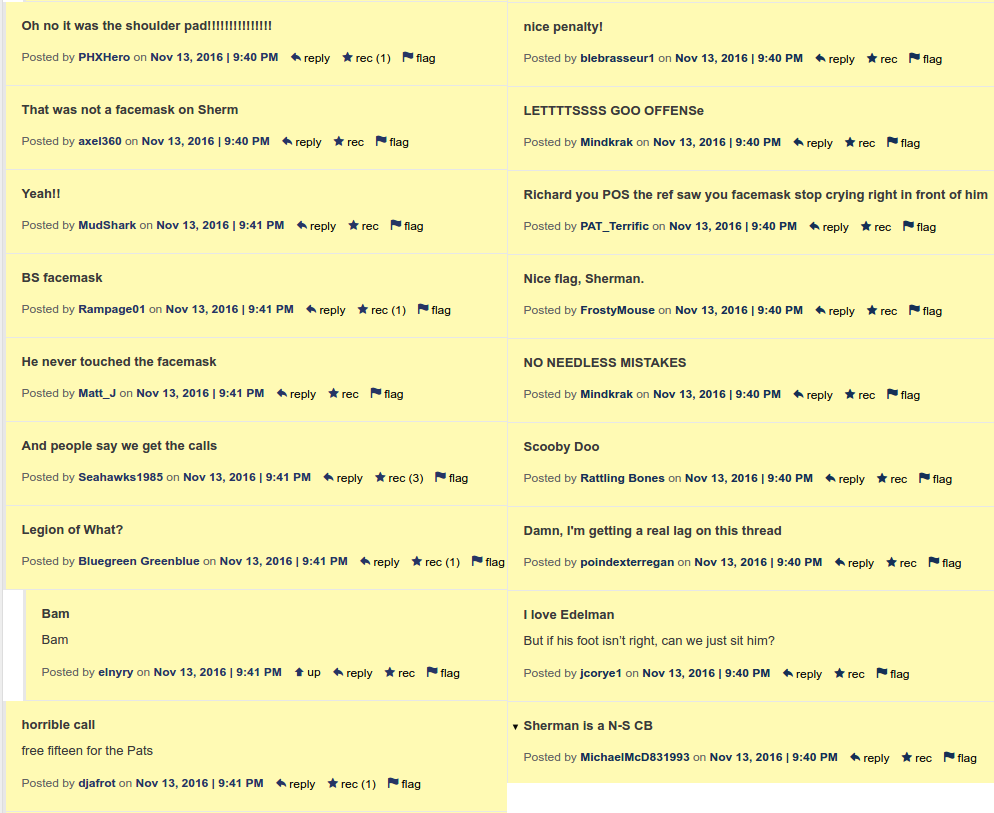 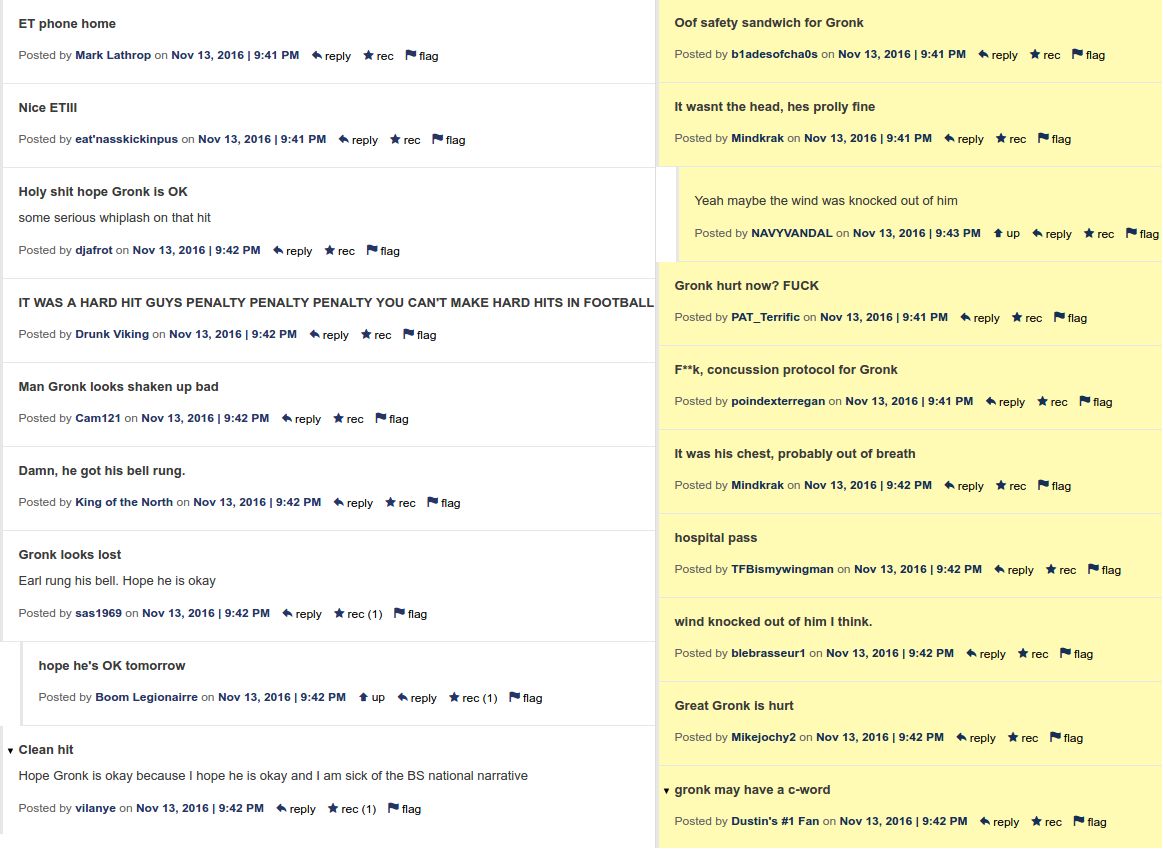 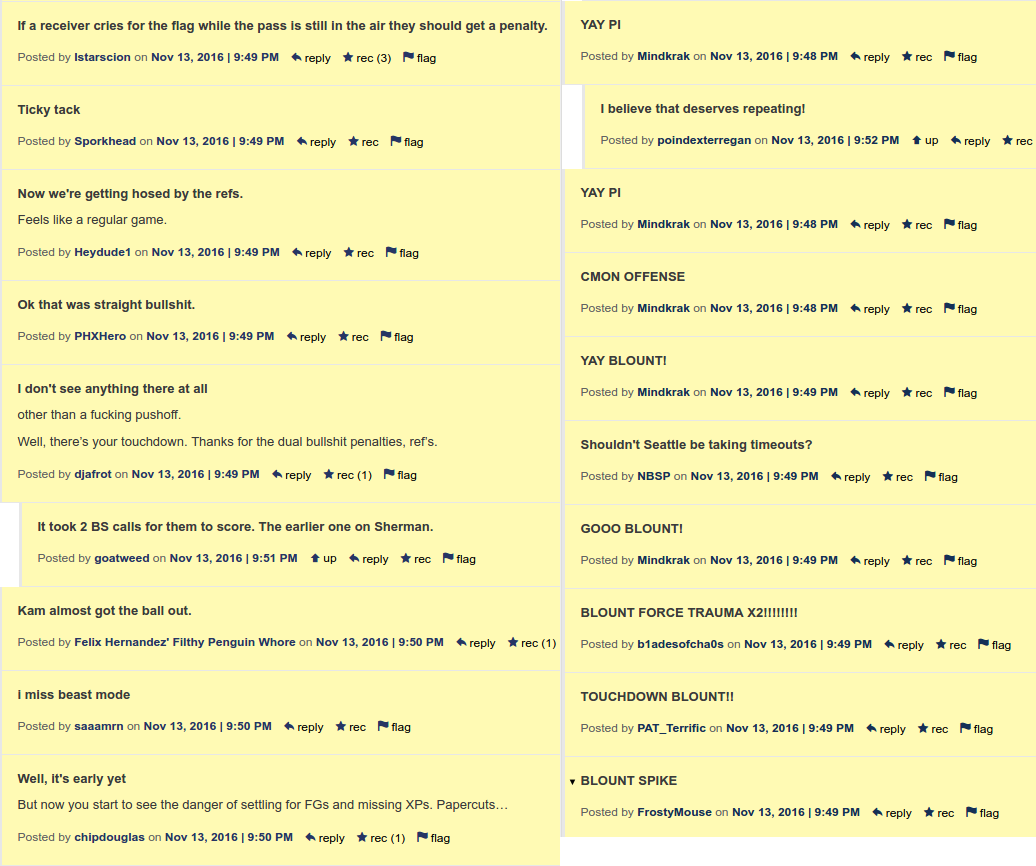 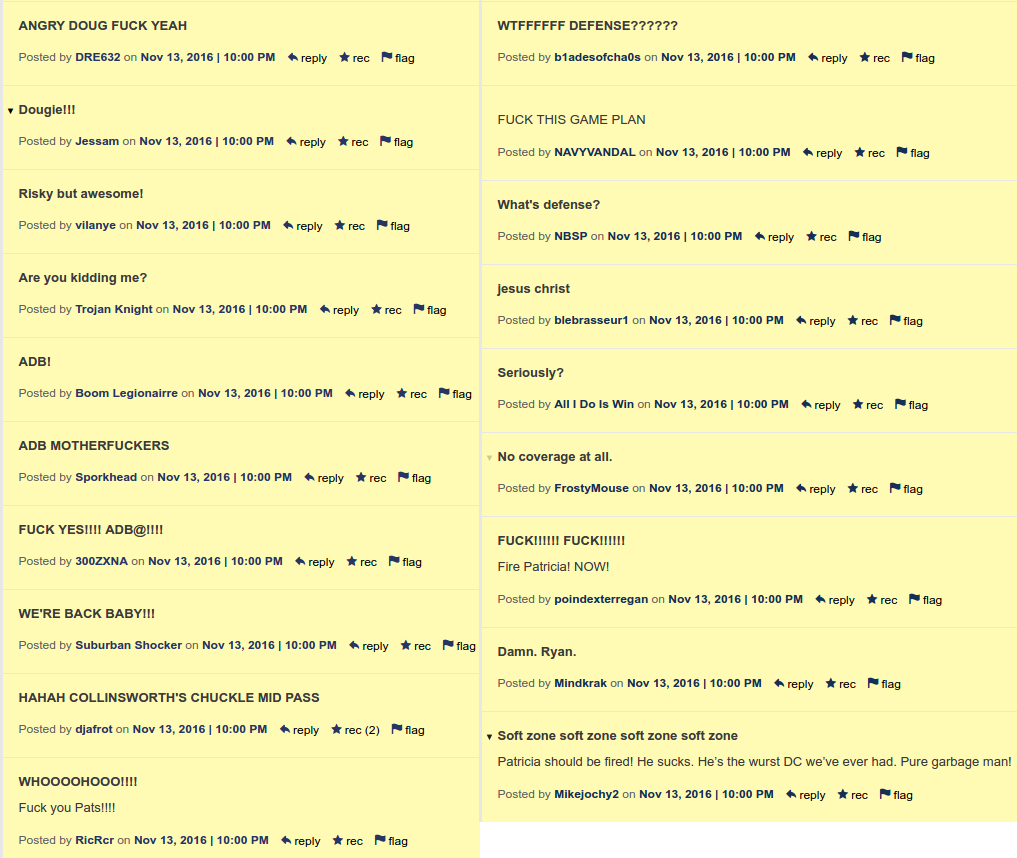 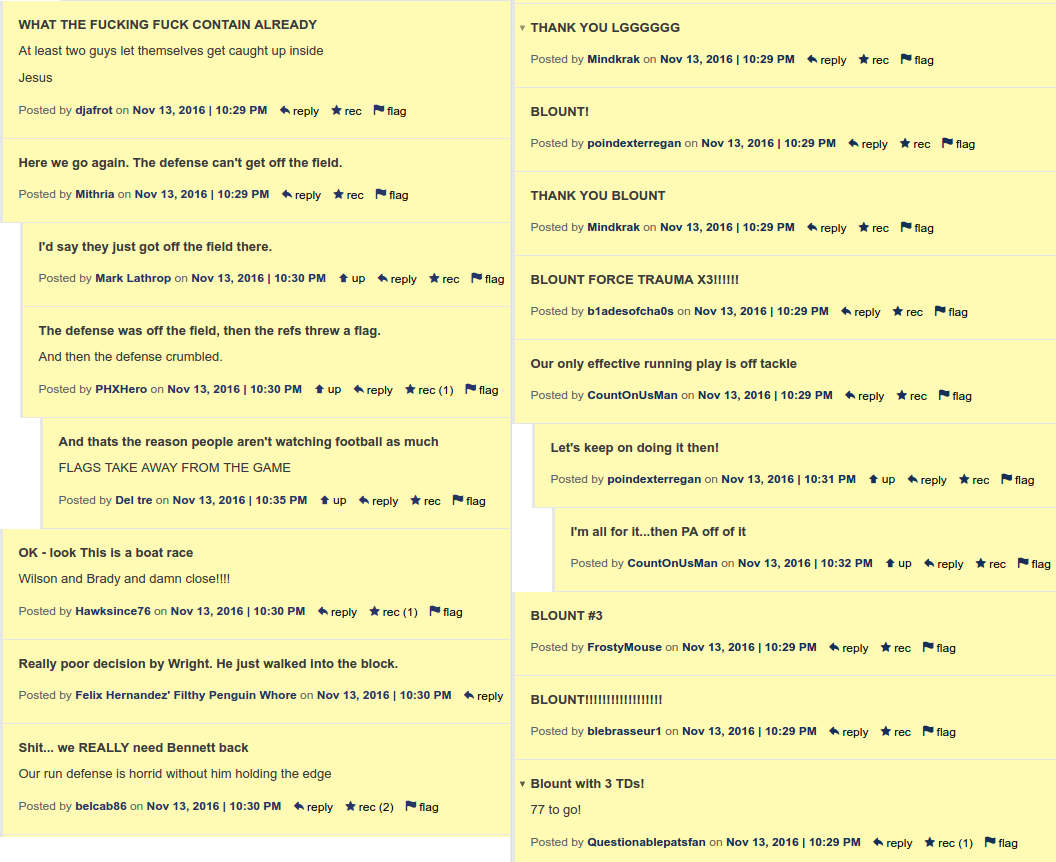 Paul Richardson gets free for 39 yard gain, setting up another Hauschka FG (22-21 SEA) 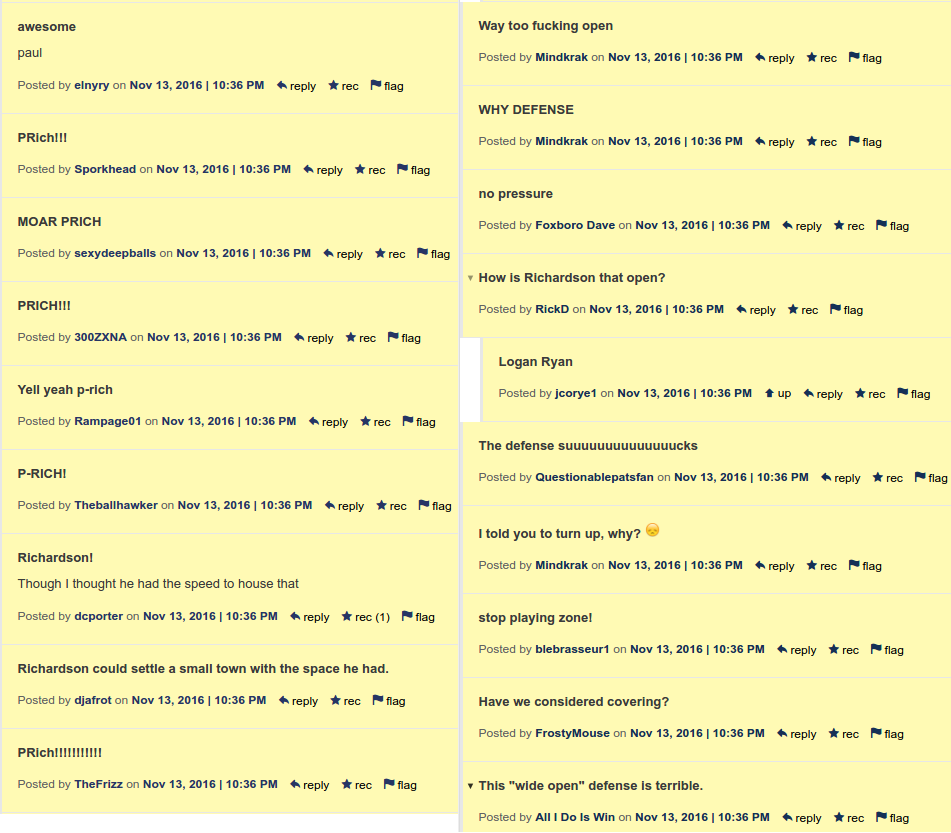 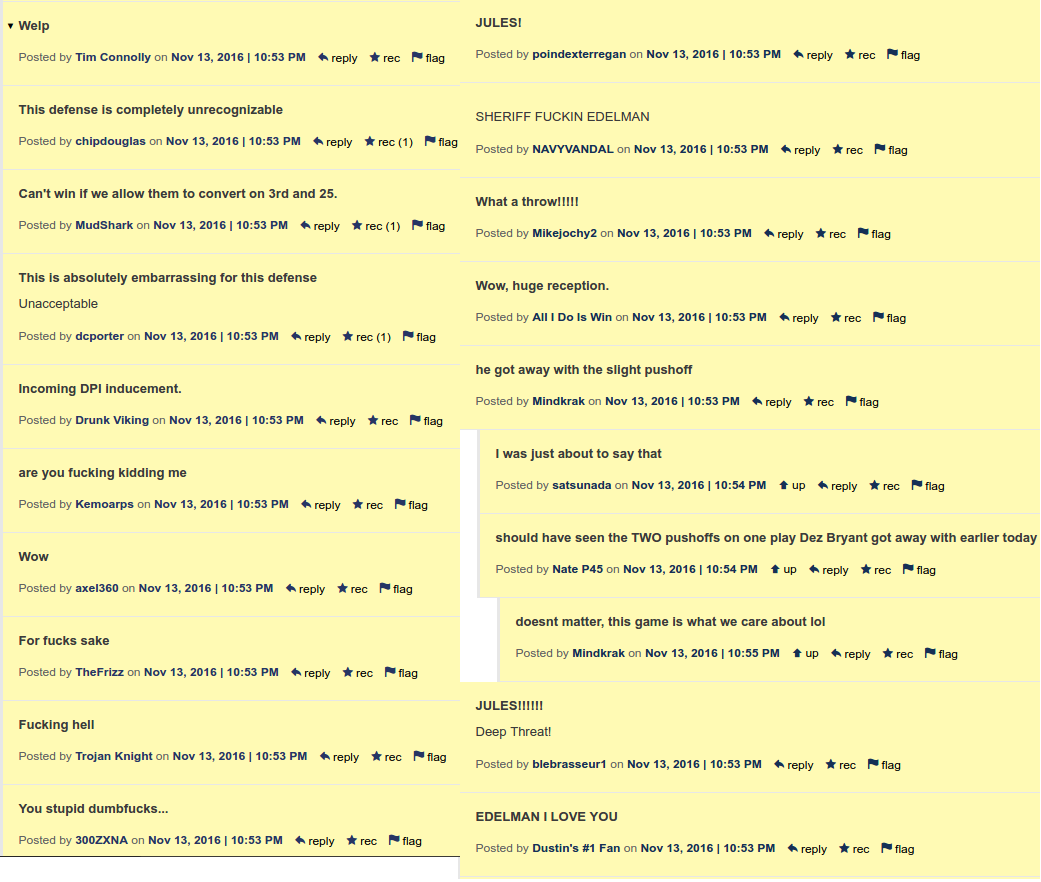 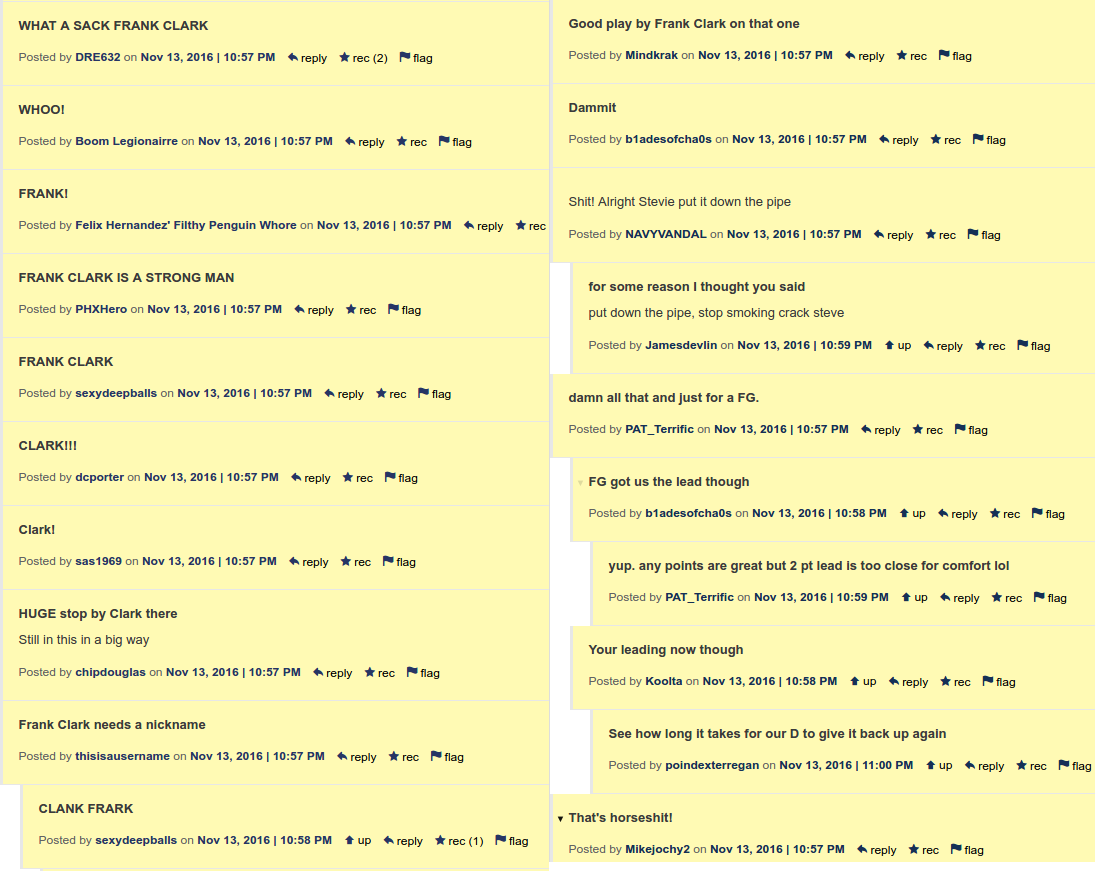 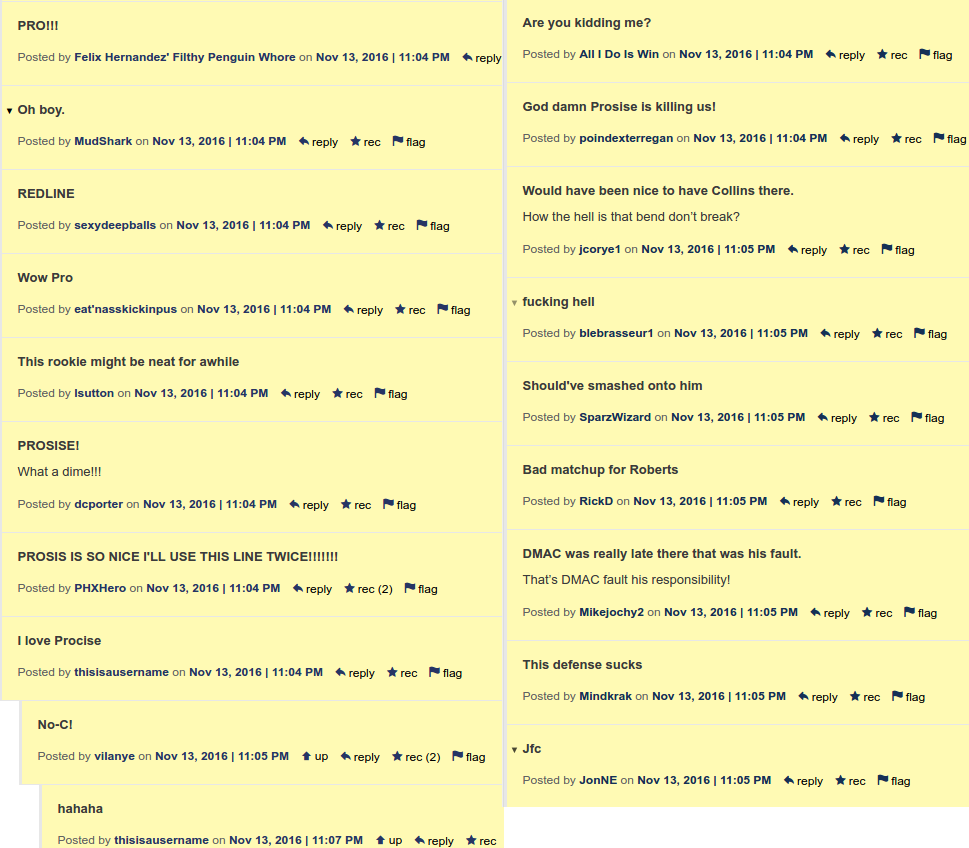 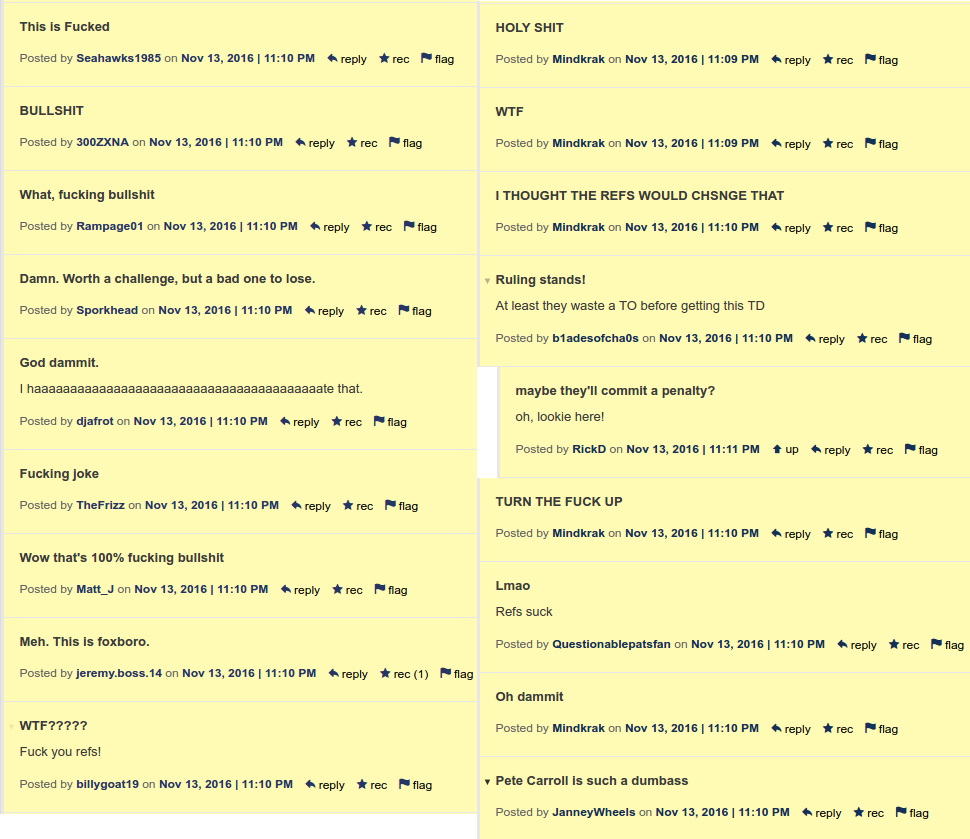 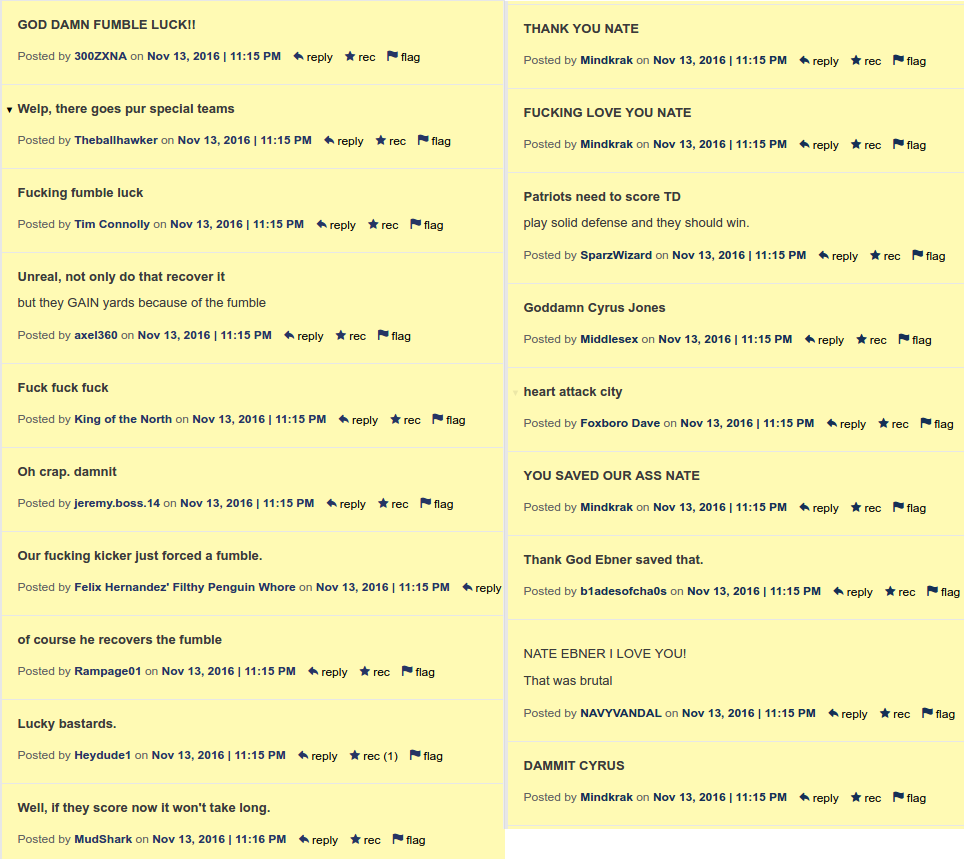 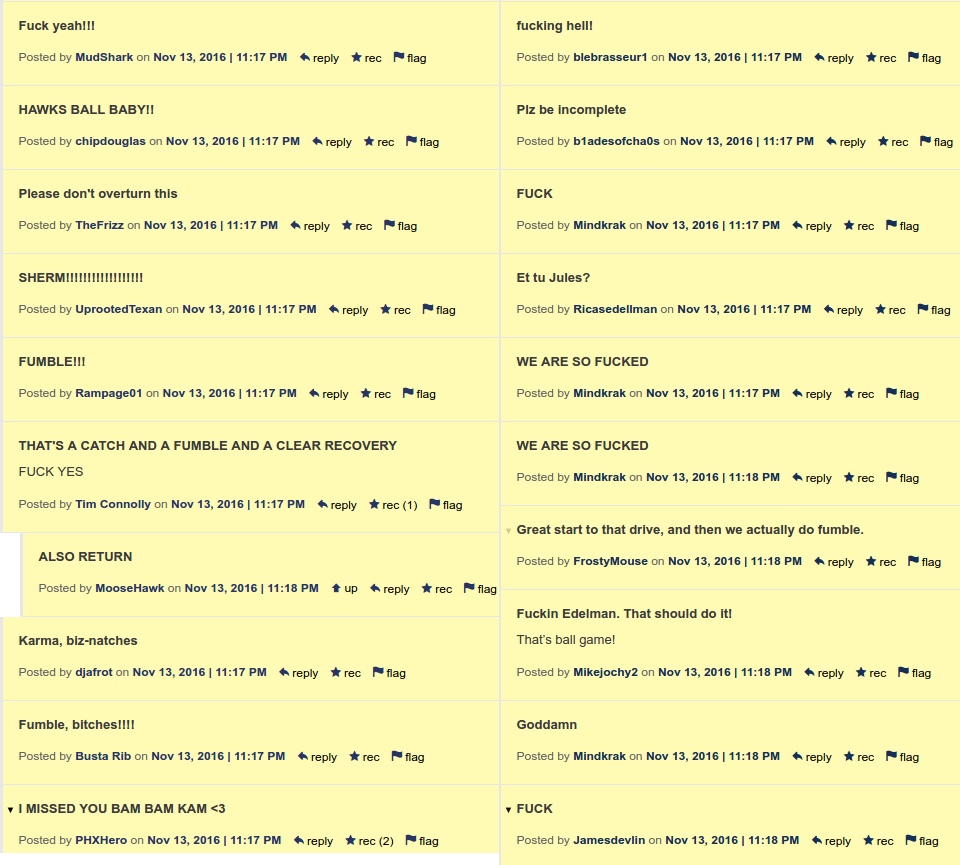 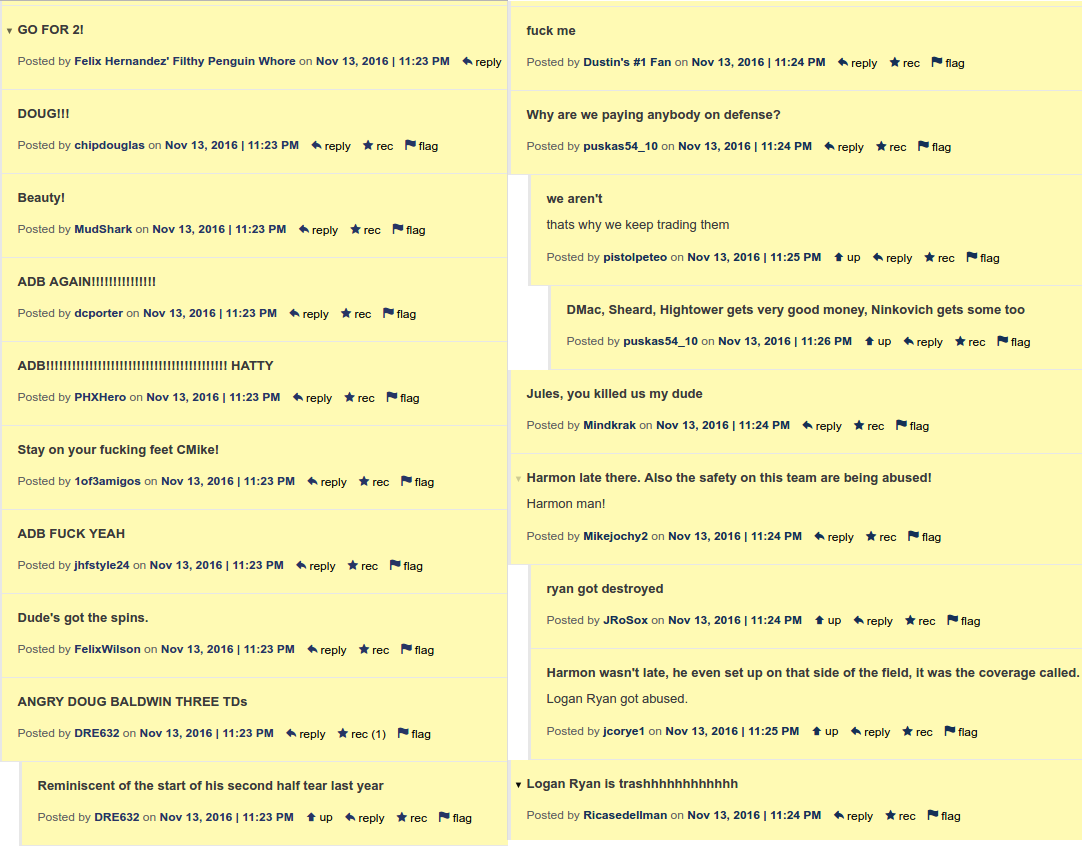 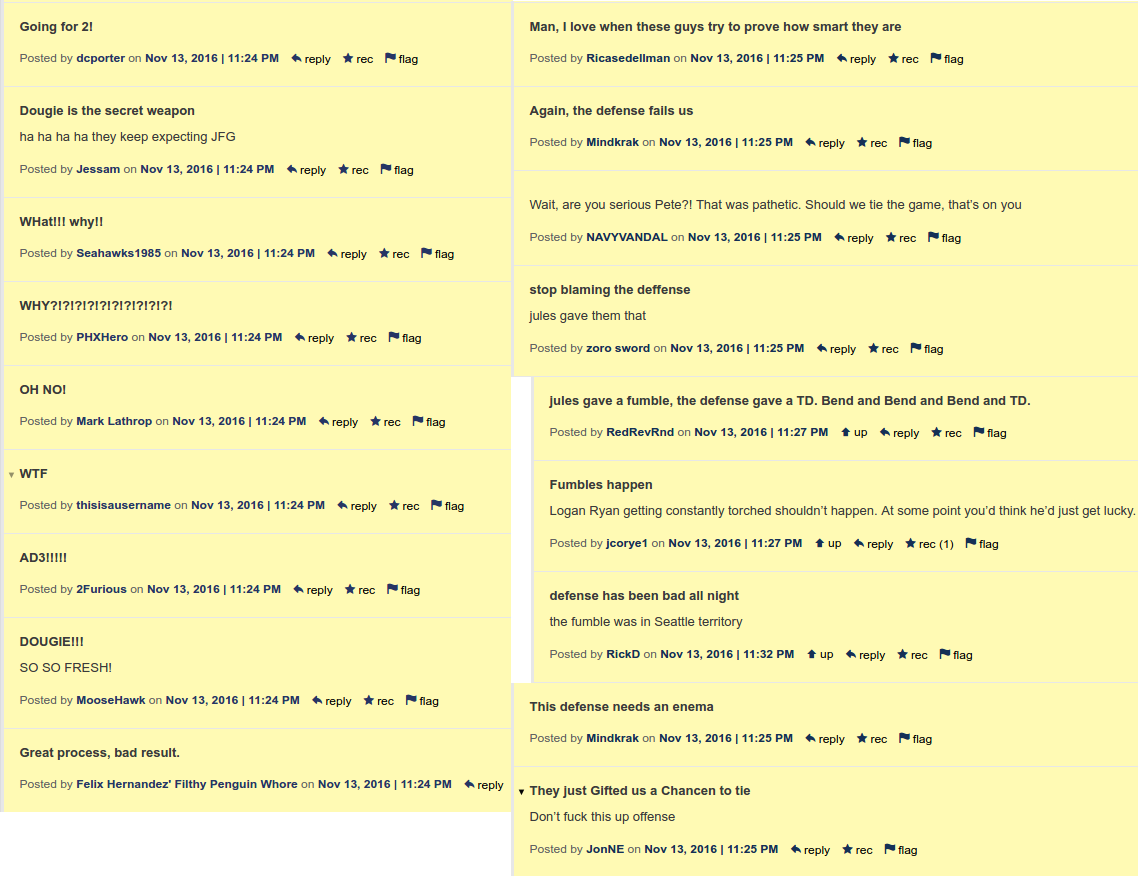 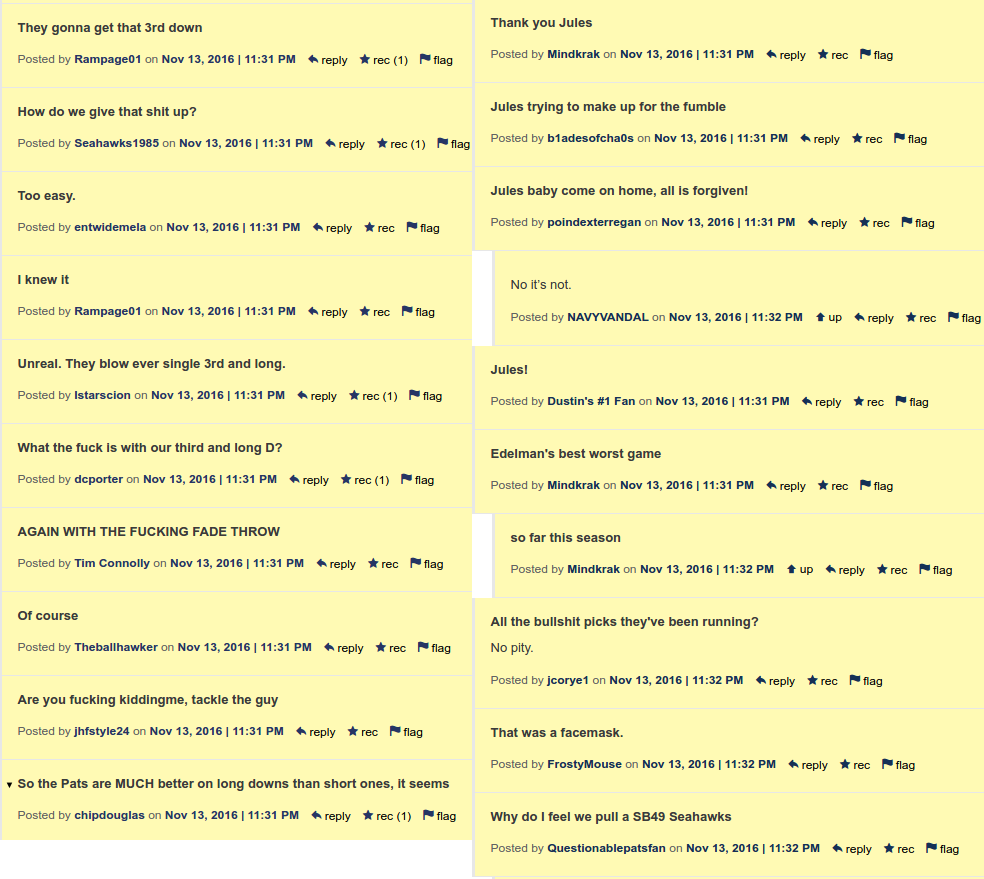 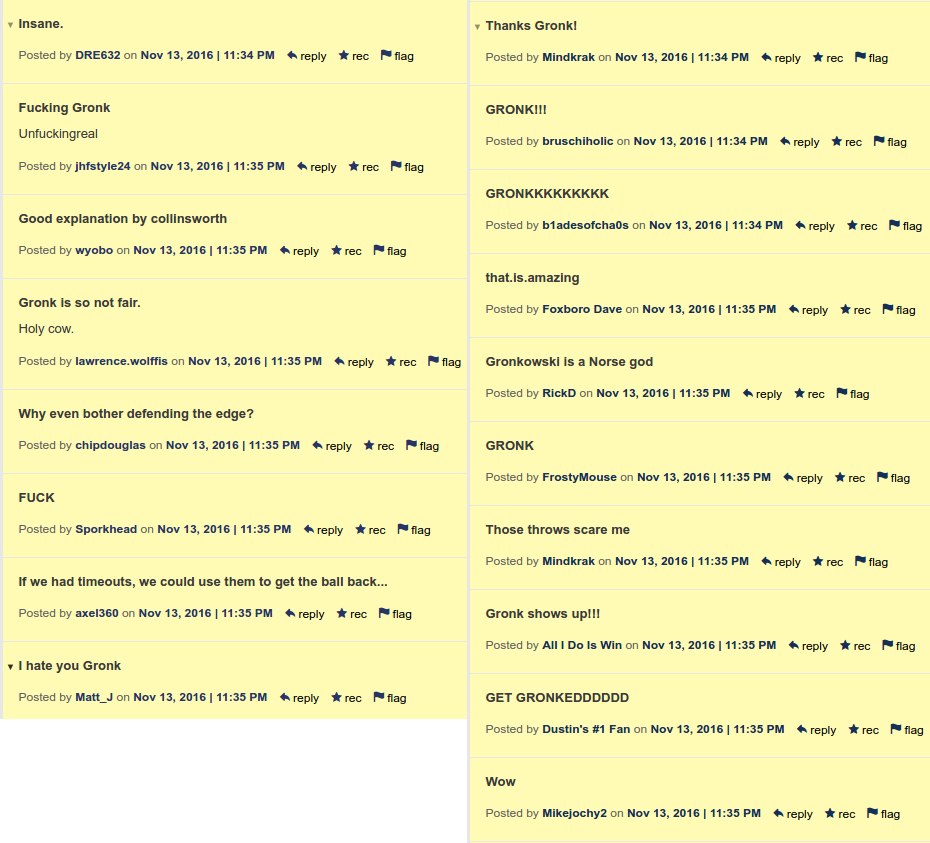 Tom Brady fumbles on 3rd and goal sneak, but recovers the ball to keep the game alive (31-24 SEA) 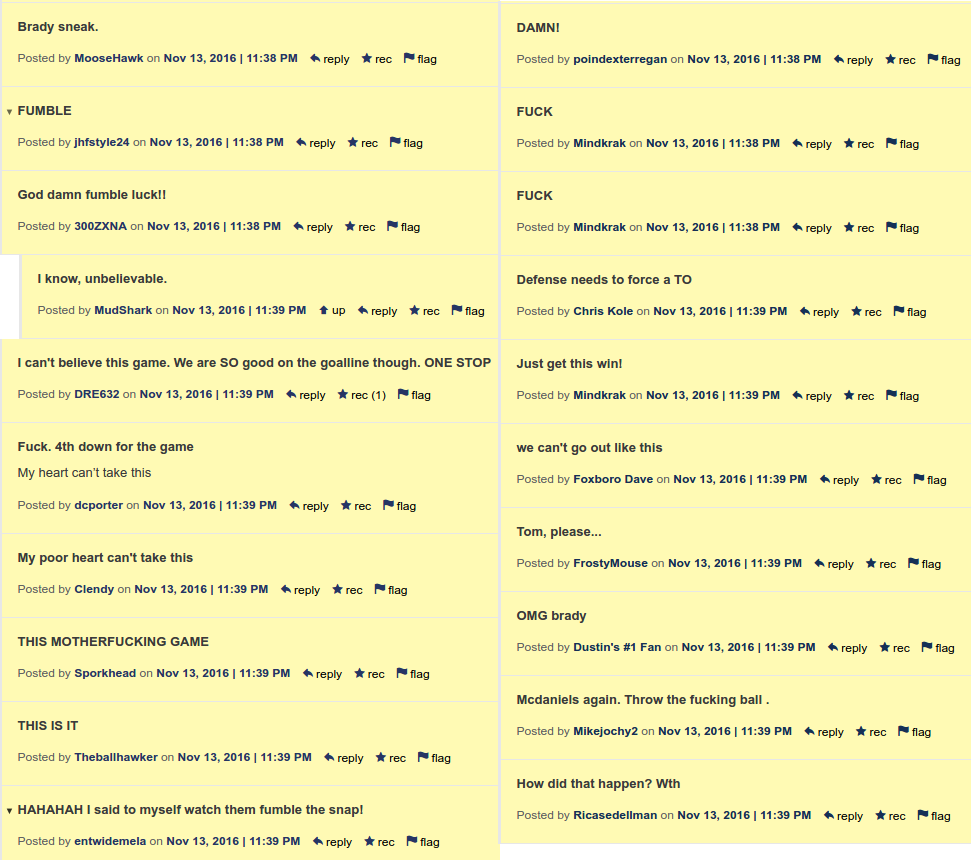 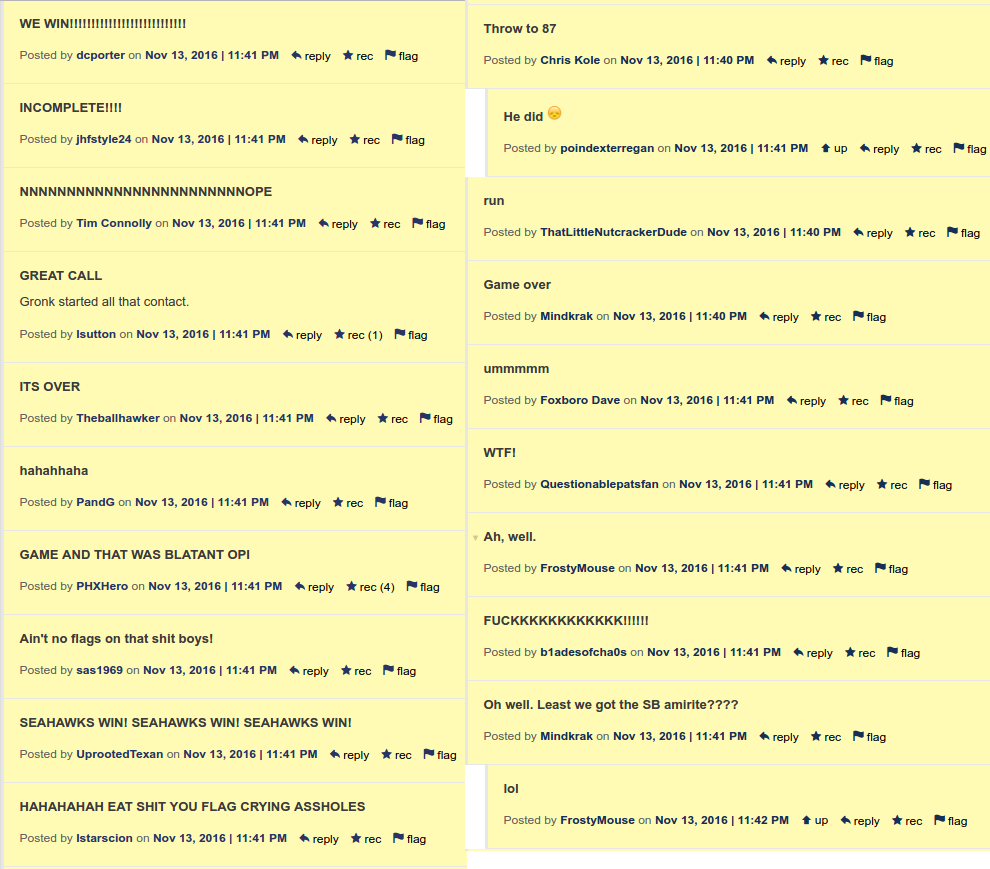 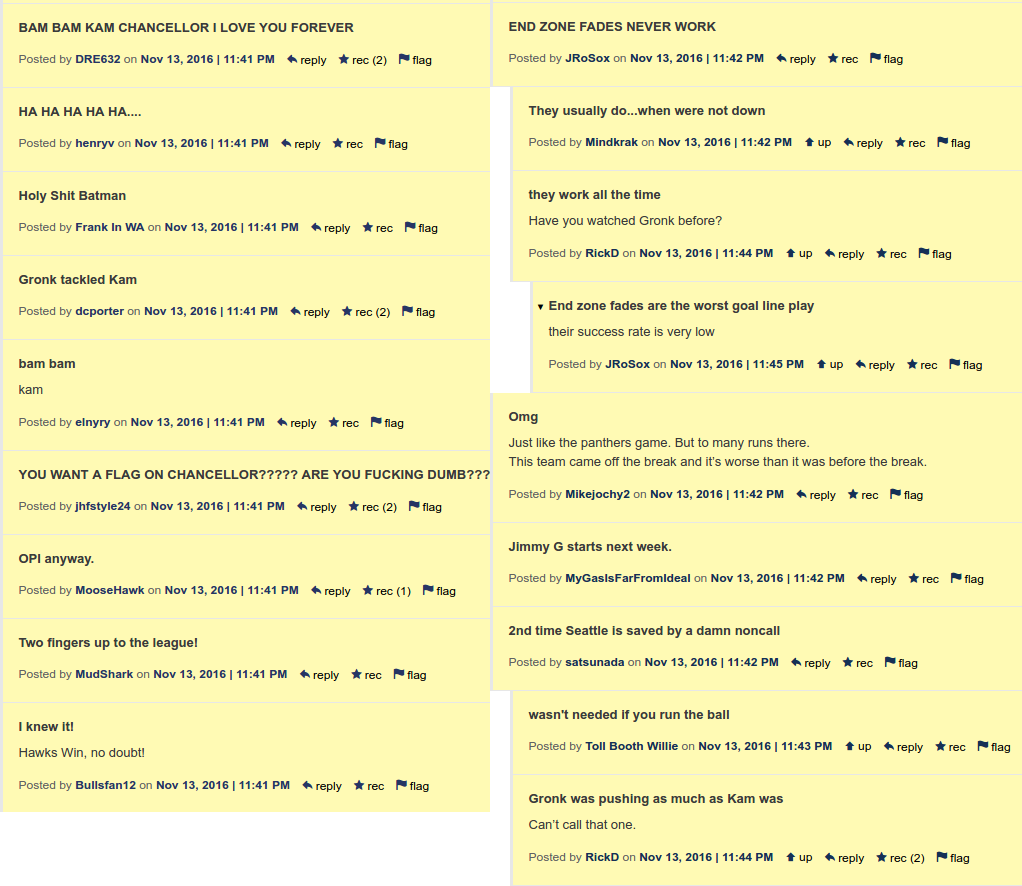 Post-Game: The Patriots defense just isn't that good this year

There's nothing for any of us stat nerds to point to after this flaming turd. 31 points. 6-12 on third down, 420 yards against. The only ones consistently showing up Malcolm Butler and Trey Flowers, who started. Rob Ninkovich and Hightower show up here and there, while everyone else is pretty much invisible. Thems the facts. The Patriots defense just isn't that good this year.

Logan Ryan and Justin Coleman spent most of the night chasing their guy who just caught it. And that's when there wasn't a receiver just sitting there wide open after the "mush rush" failed to sack Russell Wilson.

It's general disarray out there. Seahawks had four field goals and three touchdowns. They punted twice. If not for four red zone stops, this one could've been a lot worse. So yeah, everyone should be rightfully upset. But at the same time, Brady did pretty much the same thing, if not worse, to their vaunted defense, so let's keep some perspective here. - Mike Dussault, Pats Propoganda

Post-Game: The final series was flawed

To review, the Patriots had first and goal from the Seattle 2 with 43 seconds remaining in regulation, and here is how it went: on first down, Brady sneaked for a yard; on second down, Blount leapt for the goal line, but came up inches short; on third down, Brady was going to attempt another sneak, but fumbled; then on fourth down, after motioning out of their initial set, they tried to throw to take advantage of single coverage on Rob Gronkowski, but the throw missed its connection.

The frustration is that earlier in the night, Blount had dragged much of the Seattle defense down the line before powering his way to paydirt. He scored three times on the night, and now has 12 touchdowns on the season. He is not Marshawn Lynch, but in that situation he is arguably as useful as Lynch would've been in the waning seconds of Super Bowl XLIX. To give Blount only one chance to get in from the 2 was a wasted opportunity that might've cost the Patriots the game. - Dave D'Onofrio, Boston.com

Post-Game Video Rant (NSFW language): We absolutely choked this one away (Billy Bob) 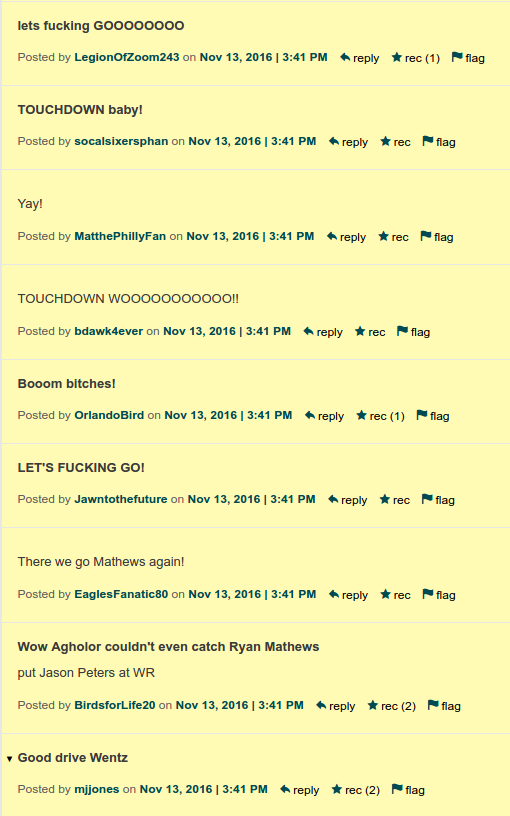 The Seahawks now sit at 6-2-1, keeping themselves right behind Dallas for the #1 seed and multiple games ahead of NFC West rivals Arizona and the Los Angeles 7-9ers. With Arizona set for two tough road games at Minnesota and Atlanta, the division could be effectively wrapped up after Thanksgiving weekend. Seattle closes out November at home vs. Philadelphia in the featured CBS late game, followed by a road trip to Tampa to play the Buccaneers. While the Patriots defense may not be that great, the Eagles have the #1 pass defense, #1 overall defense, #1 special teams, and are the #1 overall team by DVOA. They are, however, on a four-game road losing streak, have a rookie QB who has come back down to earth after a solid start to the season, have allowed at least 23 points in all of their defeats, and are the worst team to ever be a midseason #1 DVOA. It should be an intriguing matchup and you could argue that this is the toughest opponent the Seahawks will play until the postseason.

In the meantime, I'm going to enjoy this win, because this was an unbelievably dramatic game and the Seahawks pulled out what is surely their greatest ever road triumph in the Pete Carroll era.

Thanks for reading and Go 'Hawks.