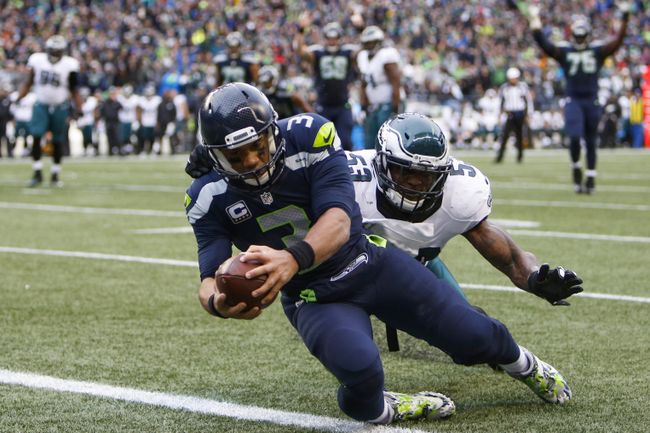 While Seattle's 26-15 win over the Philadelphia Eagles may feel like another Pete Carroll scorigami special, amazingly it isn't. This is the 4th instance of a 26-15 scoreline in NFL history, but it's the first one since 1997. Whatever the case, it's another win for the Seahawks, who are now 7-2-1 and still keeping pace for the #1 seed in the NFC.

Enemy Reaction is jam-packed today, because not only did Eagles fans provide us with some glorious material (much of which was centered around poor Nelson Agholor, who appears to be the umpteenth USC wide receiver to flop in the NFL), all of our NFC West division rivals lost, so they get some cameo appearances this week. Game thread comments for Sunday's game are courtesy of Field Gulls (duh) and Bleeding Green Nation. 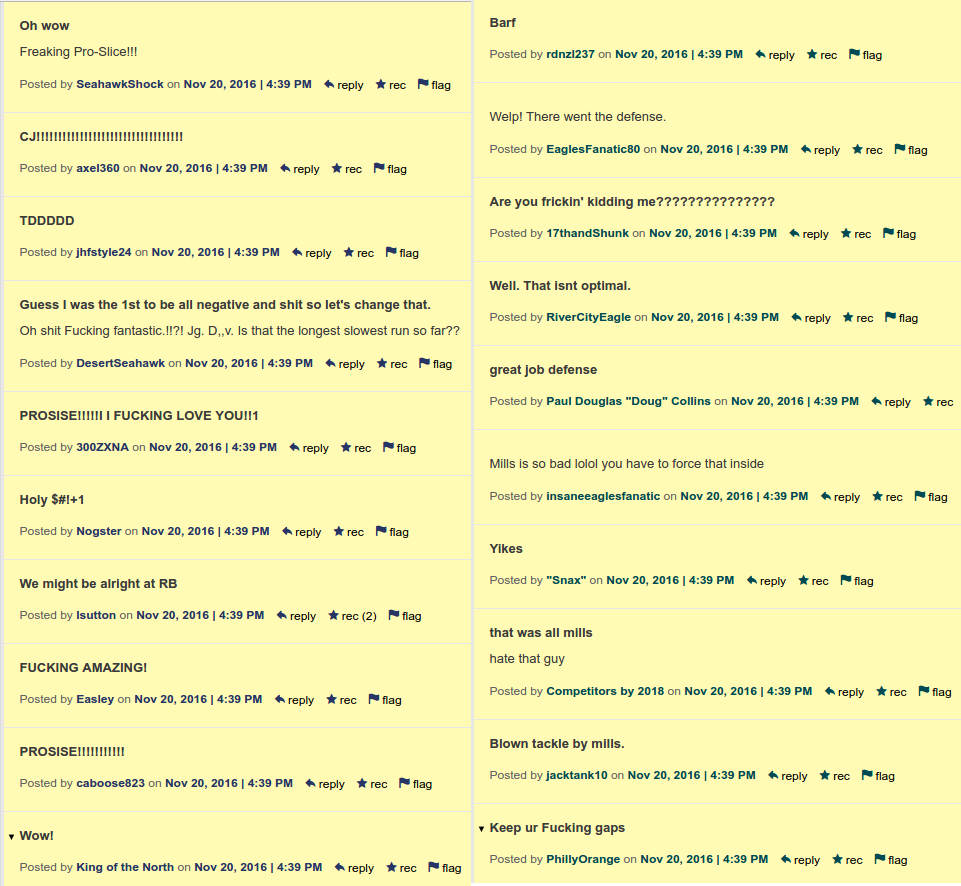 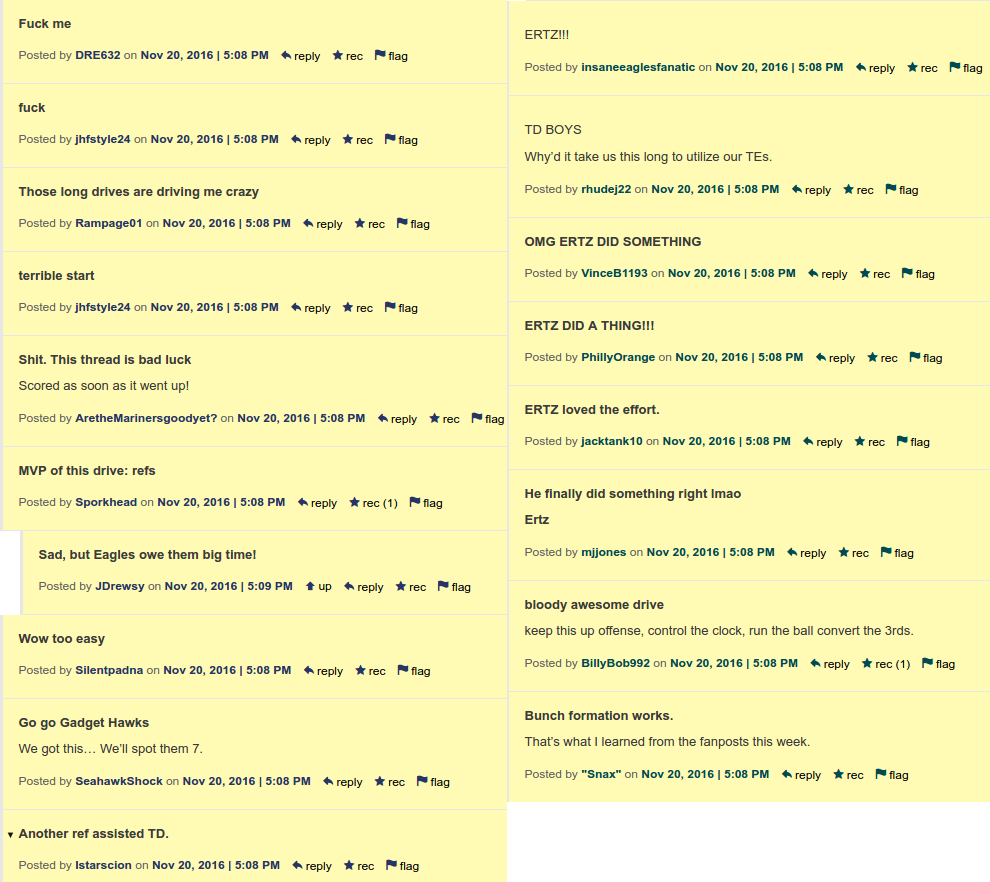 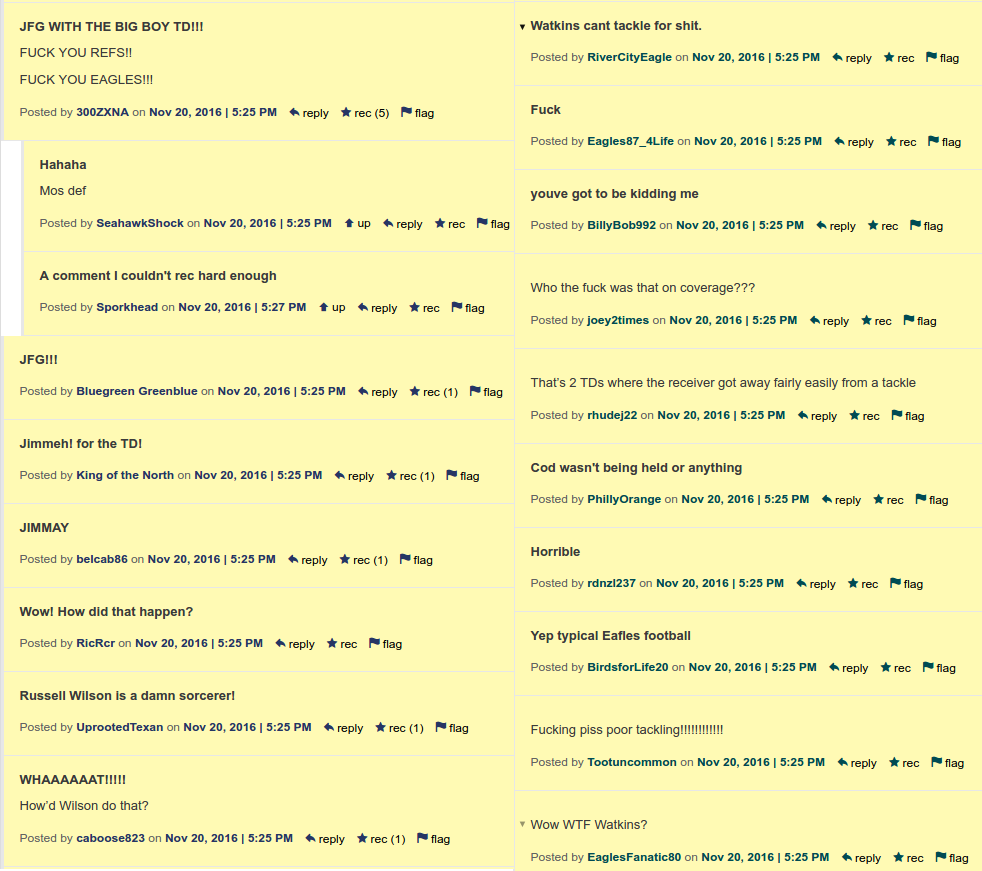 Zach Ertz rumbles for a touchdown, but it's called back on an illegal formation caused by Nelson Agholor not being on the line of scrimmage (13-7 SEA) 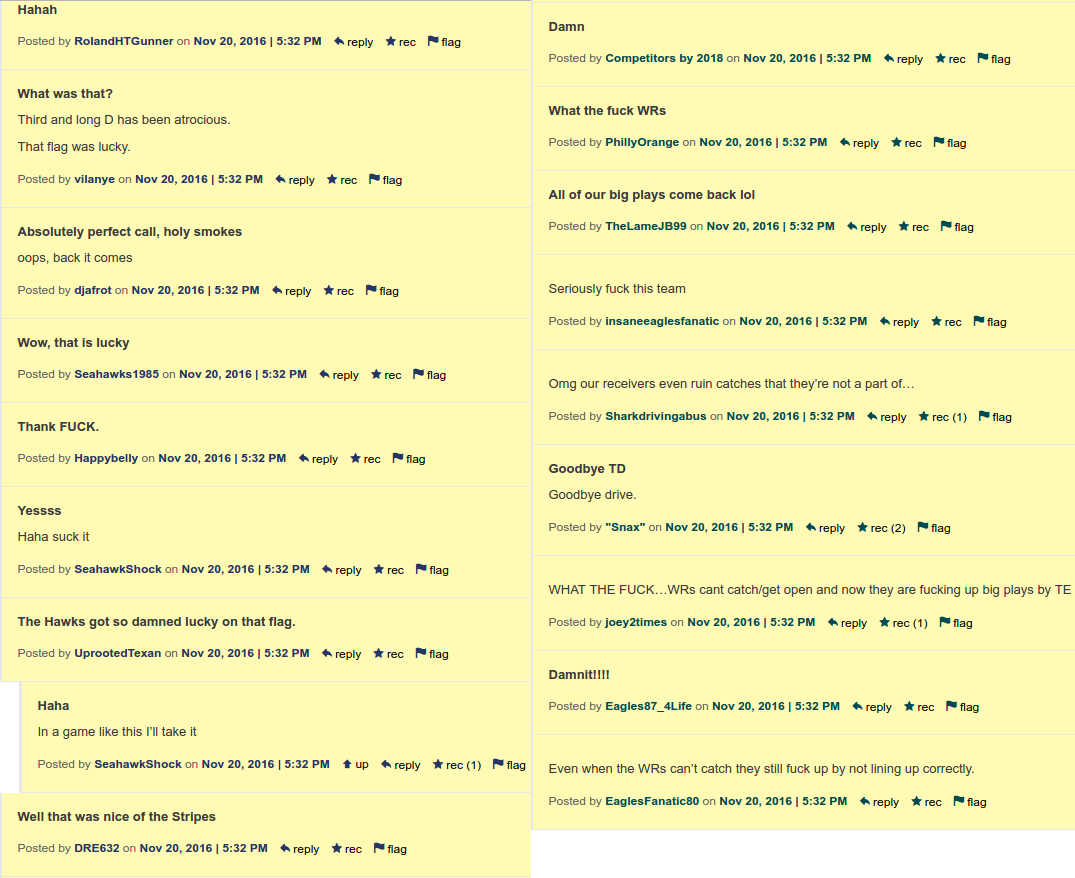 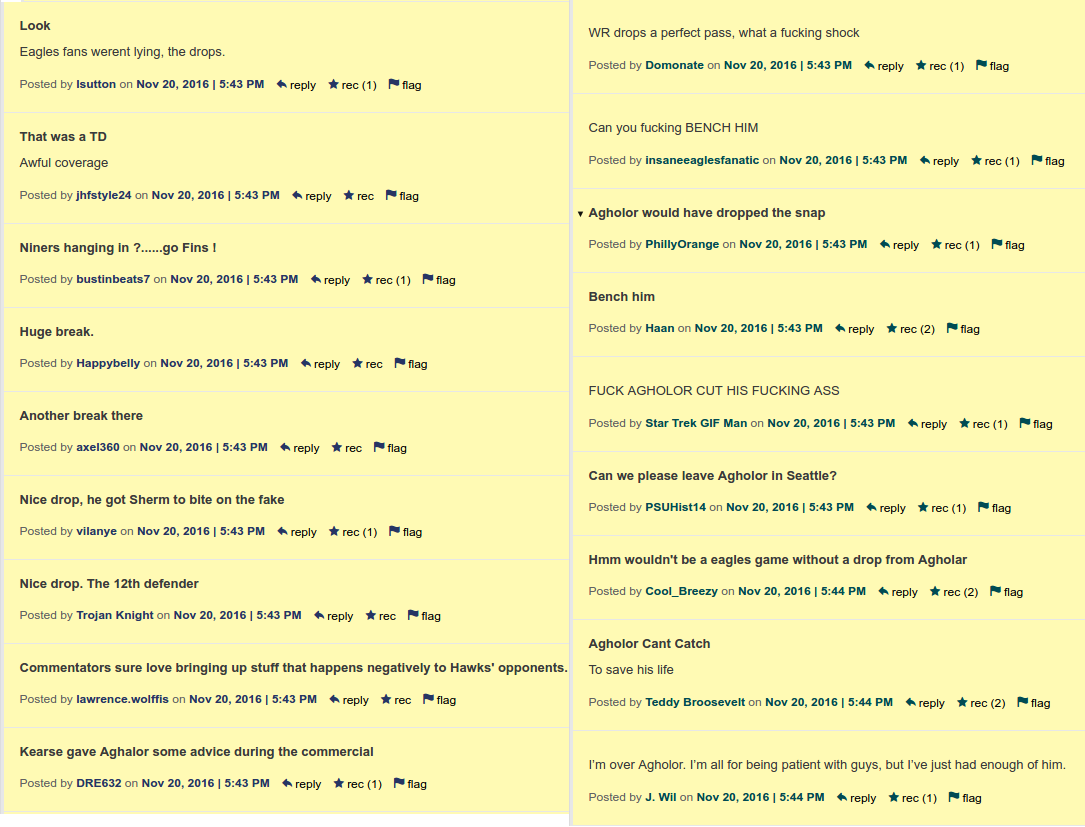 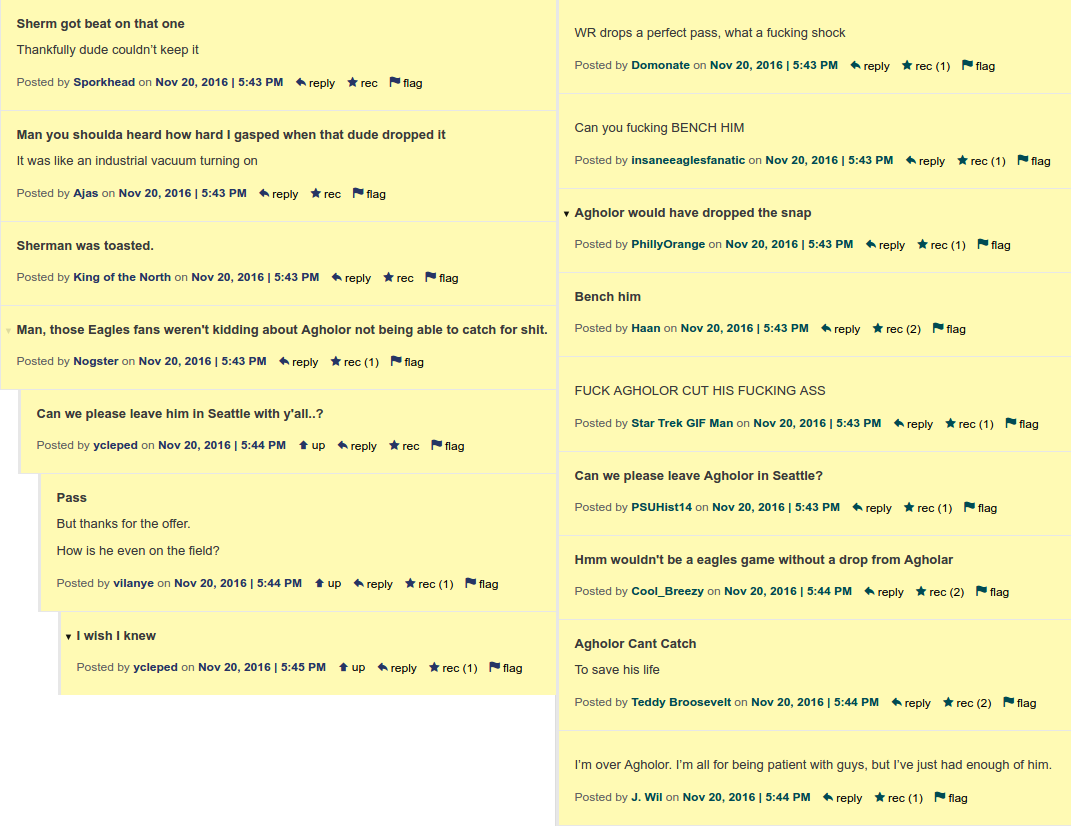 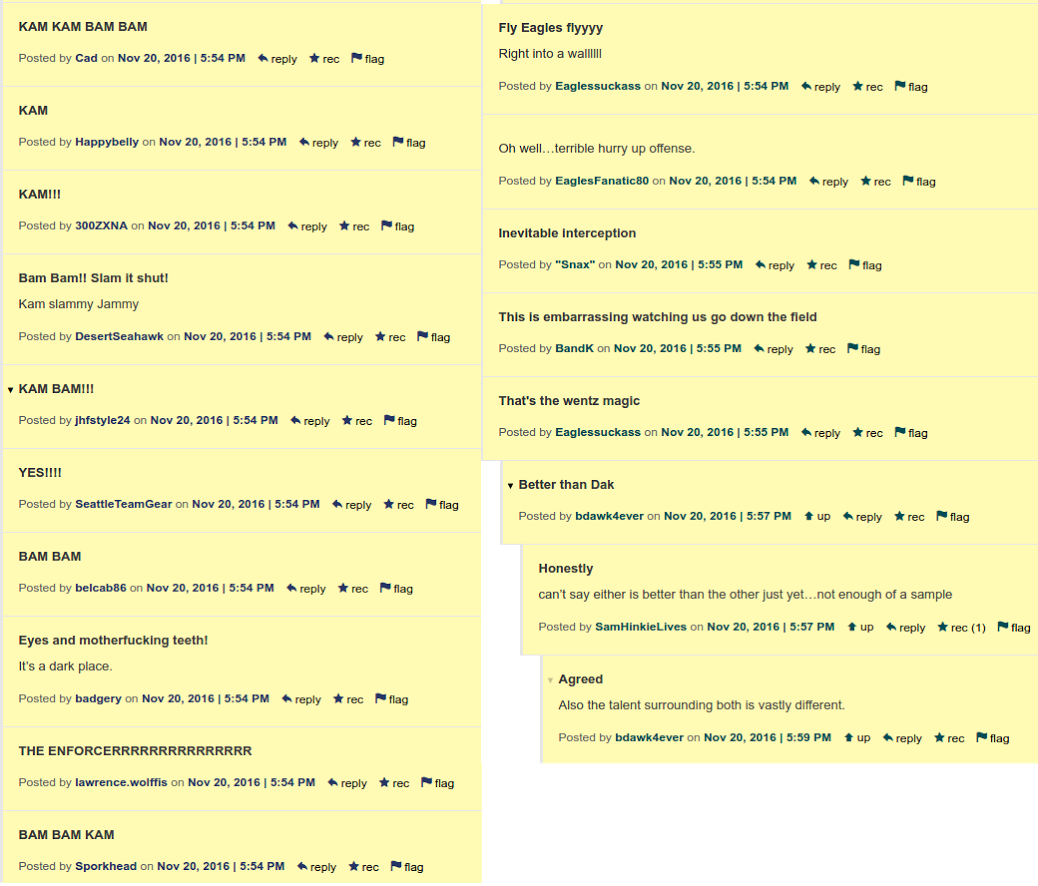 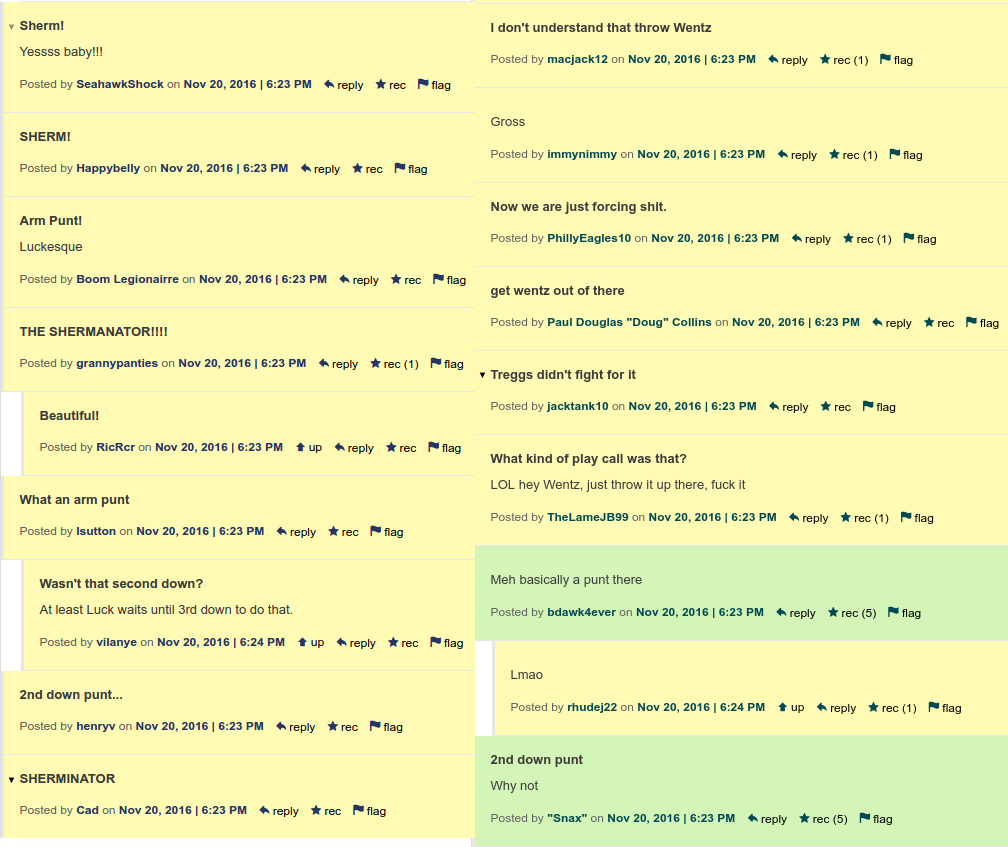 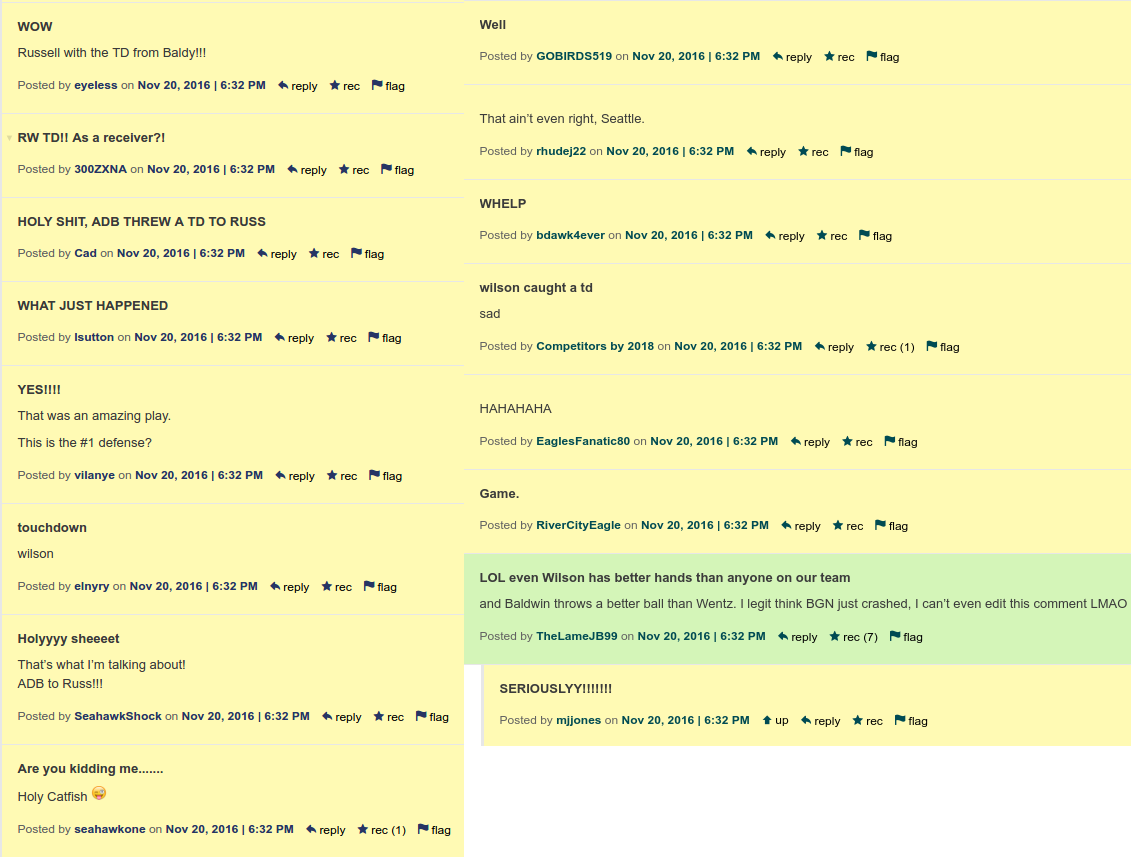 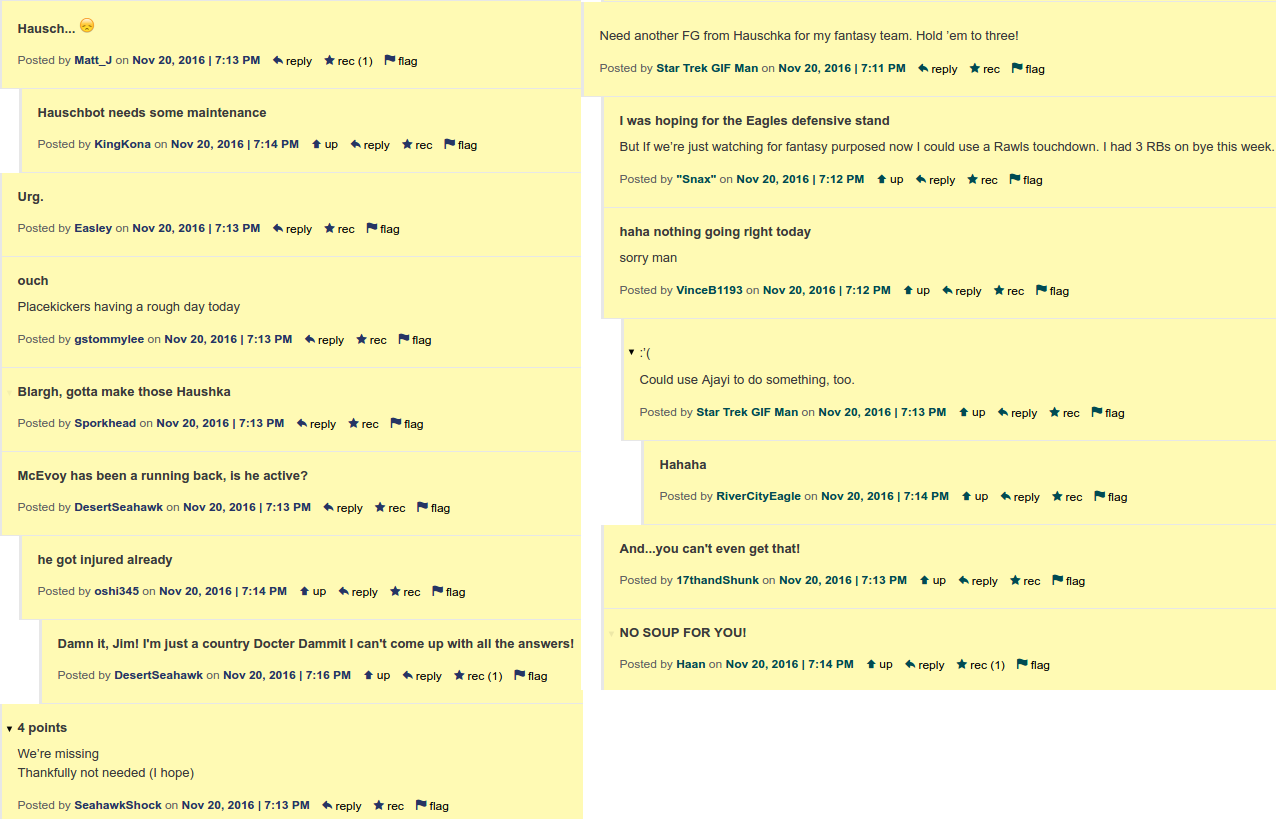 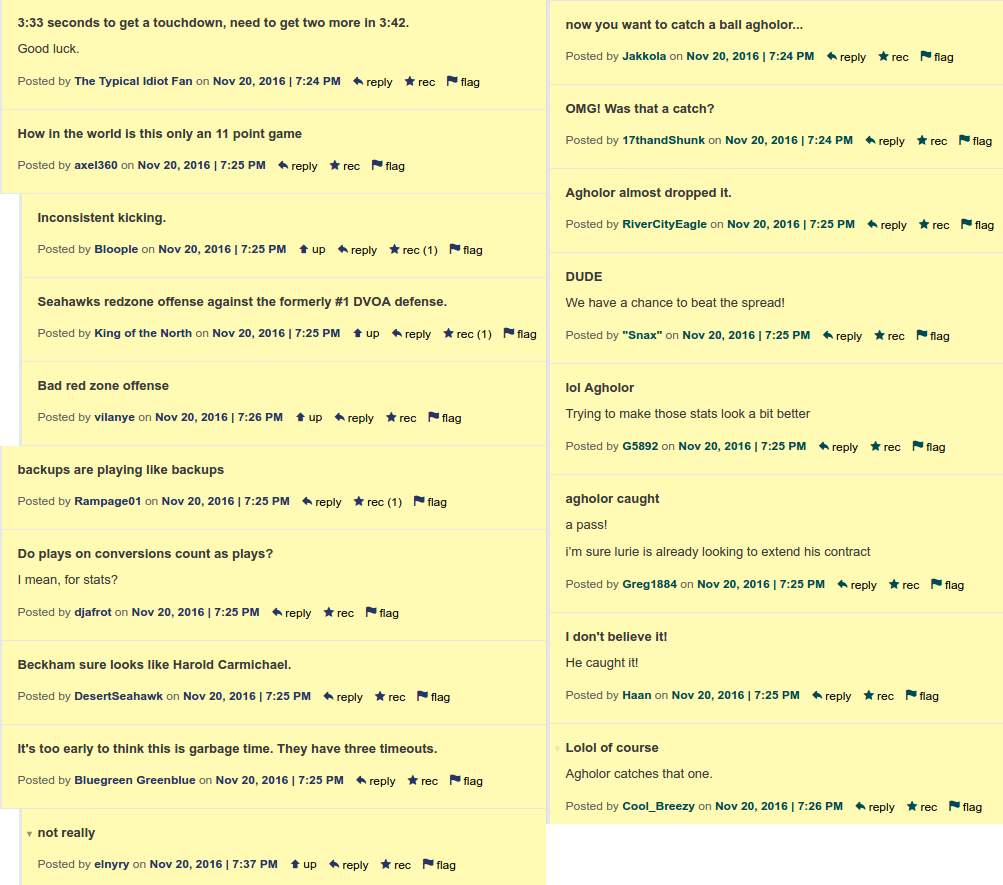 One week after Agholor had arguably his worst performance of the season, he outdid himself against the Seattle Seahawks Sunday, singlehandedly killing the Eagles' momentum with a pair of awful, inexcusable mistakes.

The first mistake was the real back-breaker. Carson Wentz hit Zach Ertz on a screen play that went for a 57-yard touchdown. However, Agholor failed to line up correctly prior to the play, negating the score due to an illegal formation penalty. On the very next play, Wentz fired a beauty to a wide open Agholor in the middle of the field, who, unsurprisingly, dropped the ball. The play likely would have resulted in a gain of at least 30 yards.

Believe it or not, Russell Wilson had a touchdown reception against the Eagles Sunday, giving him more receiving scores than Agholor since Week 2.

Agholor's incompetence is getting comically bad. His confidence is nonexistent and is becoming more of hindrance than a help to the Eagles offense. Following the loss to Seattle, Doug Pederson said he wants to "keep encouraging the kid," but Agholor is beyond the point of no return and, for the good of the team, must be benched immediately. - Ryan Quigley, Inside the Iggles

This shit has to stop. I'm not sure what may be in Agholor's rookie contract that prevents the Eagles from cutting him, nor do I care, but he needs to stop playing. He needs to not dress. He's actively hurting the team. He cost the Eagles one touchdown and at least another three points in the span of about three minutes yesterday. Those are backbreakers on the road against a team like the Seahawks when you're facing a steep up-hill climb to being with. If he just... does his job, the Eagles likely have at least 10 more points on the board and the entire complexion of the game is different. The Eagles lost 26-15.

In college sports, the difference between good and great, bad and terrible is often obvious to the viewer. The discrepancies in talent are so great that even the untrained eye can usually spot the better team or player. I'd argue it's one of the things that often makes college sports more exciting than pro sports- because they lend themselves to mismatches, big plays and even chaos. Rarely in pro sports are deficiencies so glaring. The margin between winning and losing, the best and the worst, is razor thin. Sure, you can tell obvious superstars, and other degrees of talent, but rarely does one player - or in this case one unit - stand out as being so atrociously awful that they don't even belong on the same field as the competition. That's the case with Nelson Agholor and the band of misfits Carson Wentz has to throw to. - Kyle Scott, Crossing Broad

Around the NFC West

Arizona Cardinals (Revenge of the Birds) 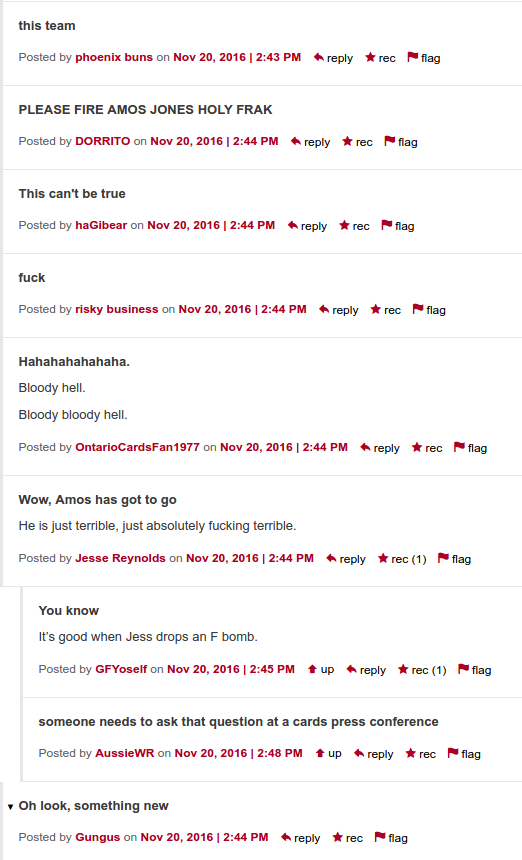 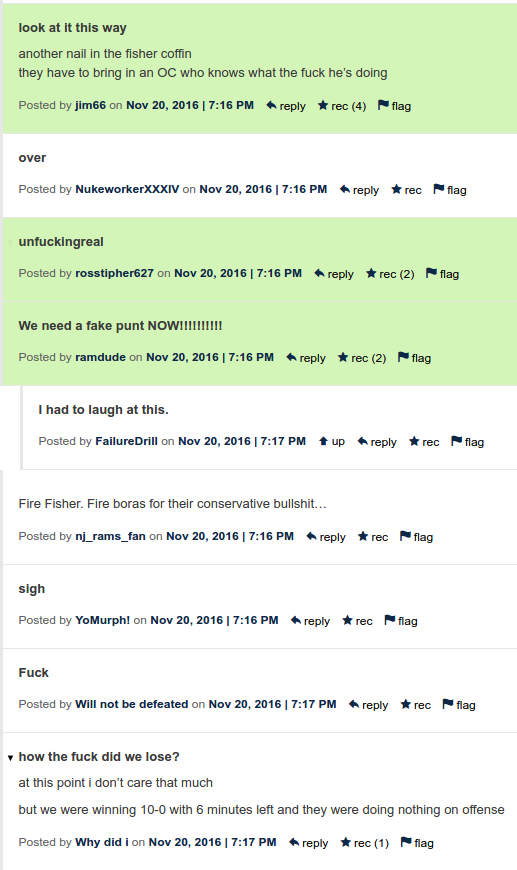 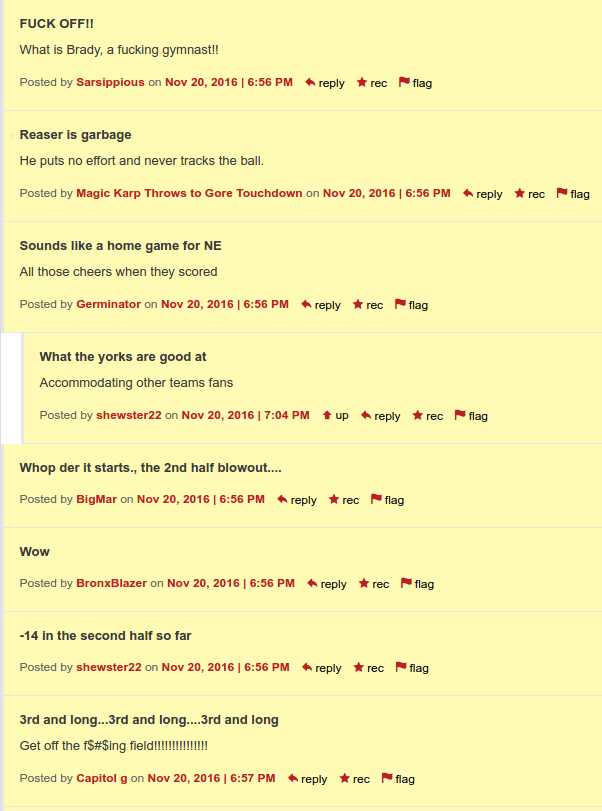 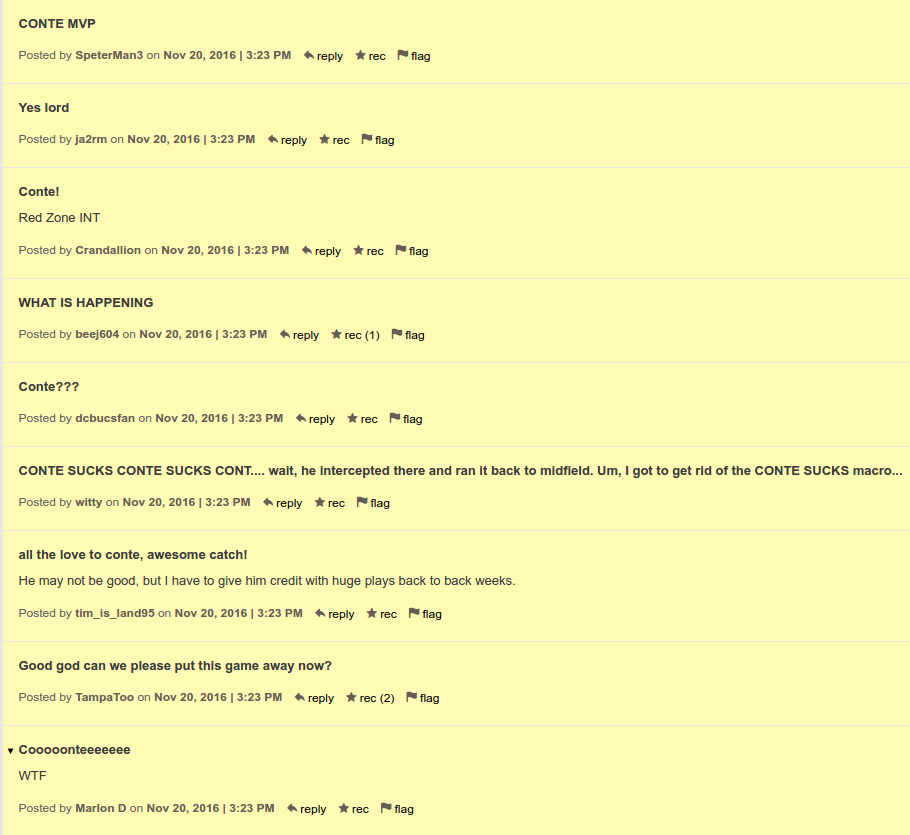 Unfortunately, this win came at a cost, as CJ Prosise will be out possibly until the playoffs, Earl Thomas and DeShawn Shead could be out for the next two weeks, Troymaine Pope has the dreaded "legit" ankle injury, and even the legendary Tanner McEvoy had a sprained foot, so his status is in doubt.

On the plus side, Thomas Rawls looked good in his return, Michael Bennett is on track to play again, and that's unwelcome news for Seattle opponents, starting with Bennett's former team in the Tampa Bay Buccaneers. The Bucs are 5-5, one game out of the NFC South lead, and are coming off a big road win over the Kansas City Chiefs. However, they're 1-4 at home, and that one win was against a Bears team that's currently on injured reserve or suspended for PEDs. It's Jameis Winston's first game going up against (a very banged up) Legion of Boom, and it's the first time the Seahawks have played at Raymond James Stadium in the Russell Wilson era. The game kicks off at 4:05 PM ET, so no 10 AM PT fears to be had here. A win for the Seahawks, combined with losses by Arizona (at Atlanta) and Los Angeles (at New Orleans), effectively clinches the NFC West with 5 games to go. Seattle would basically have to lose out to blow the division and miss the playoffs. I highly doubt that's happening. The real focus is on getting the #1 seed, so Washington beating Dallas on Thursday would be an ideal start to the week, combined with everything else I just mentioned happening on Sunday. I think that'd be a nice Thanksgiving weekend.

Thanks for reading, enjoy the holidays, and go 'Hawks!