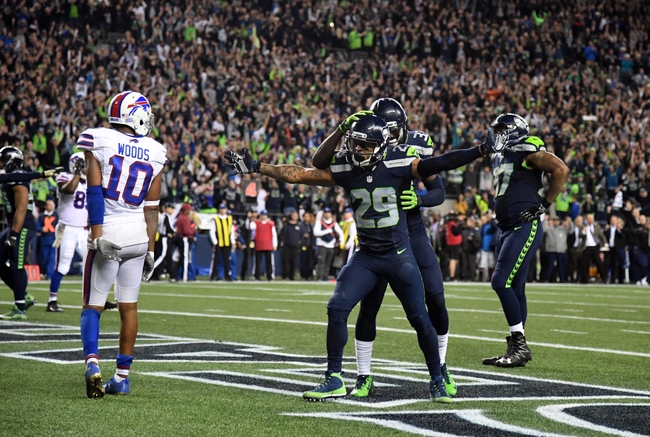 Well that was exciting, wasn't it? By exciting I also mean nerve-wracking. The Seahawks were in serious jeopardy of losing their first Monday Night Football game since the infamous Julius Jones game vs. Dallas in the 2004 season, but the defense made a heroic stand to save themselves from a devastating defeat at the hands of the Buffalo Bills.

There was no shortage of action (and controversy) in the 1st half, and while things somewhat died down in the 2nd half, this week's Enemy Reaction gamethread review clocks in at 20 screenshots. Without further ado, here's the first ever appearance for Buffalo Rumblings in Enemy Reaction. Enjoy! 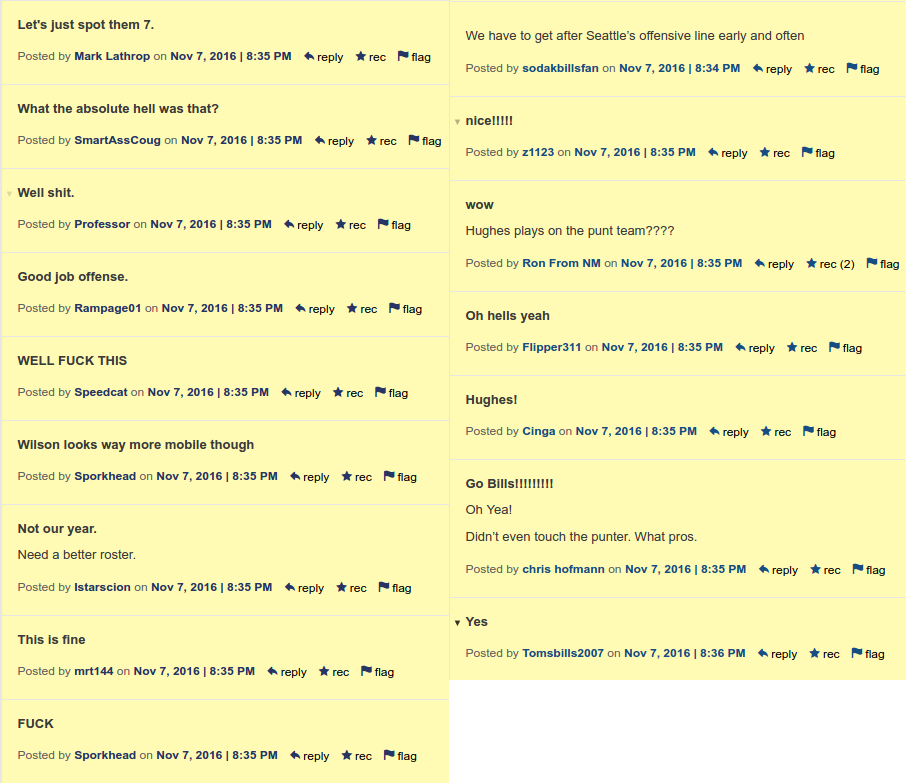 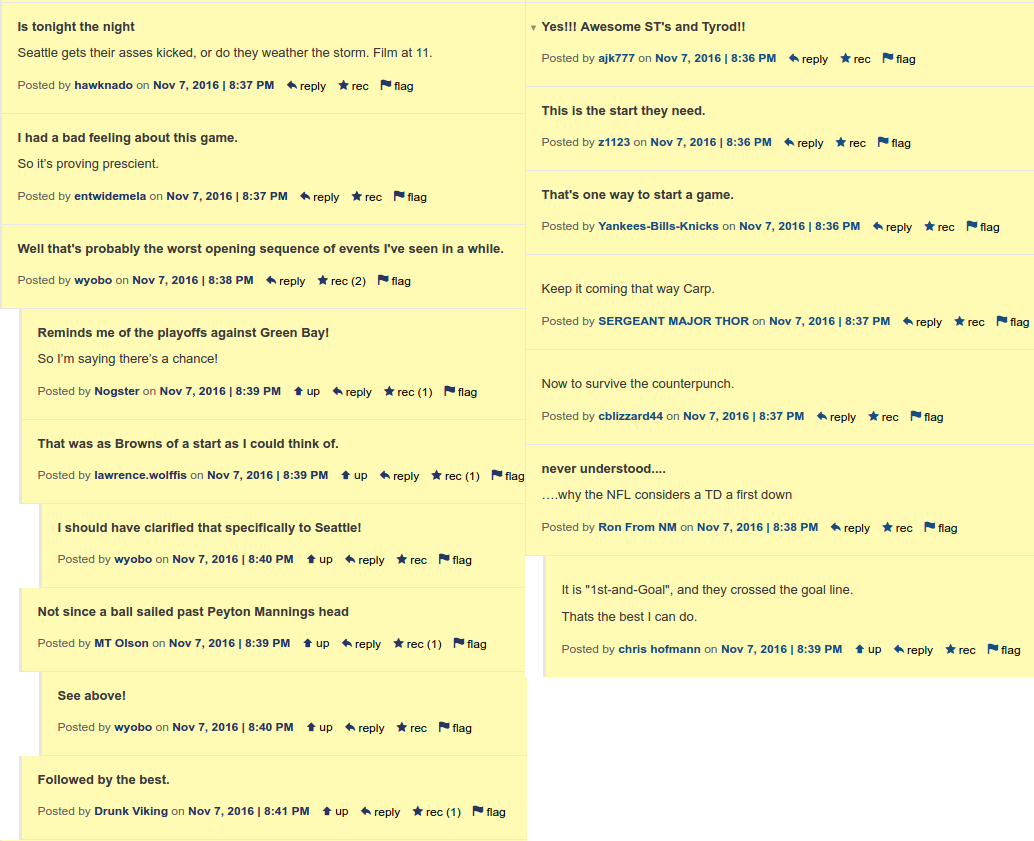 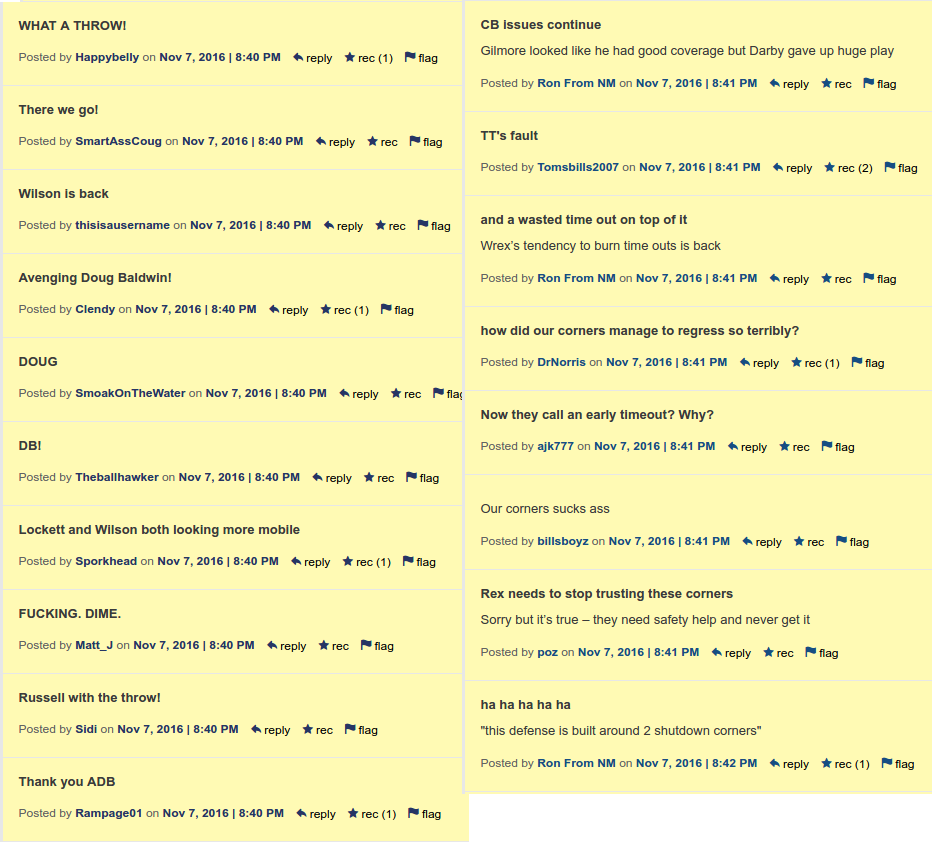 Russell Wilson strides in to tie the game (7-7) 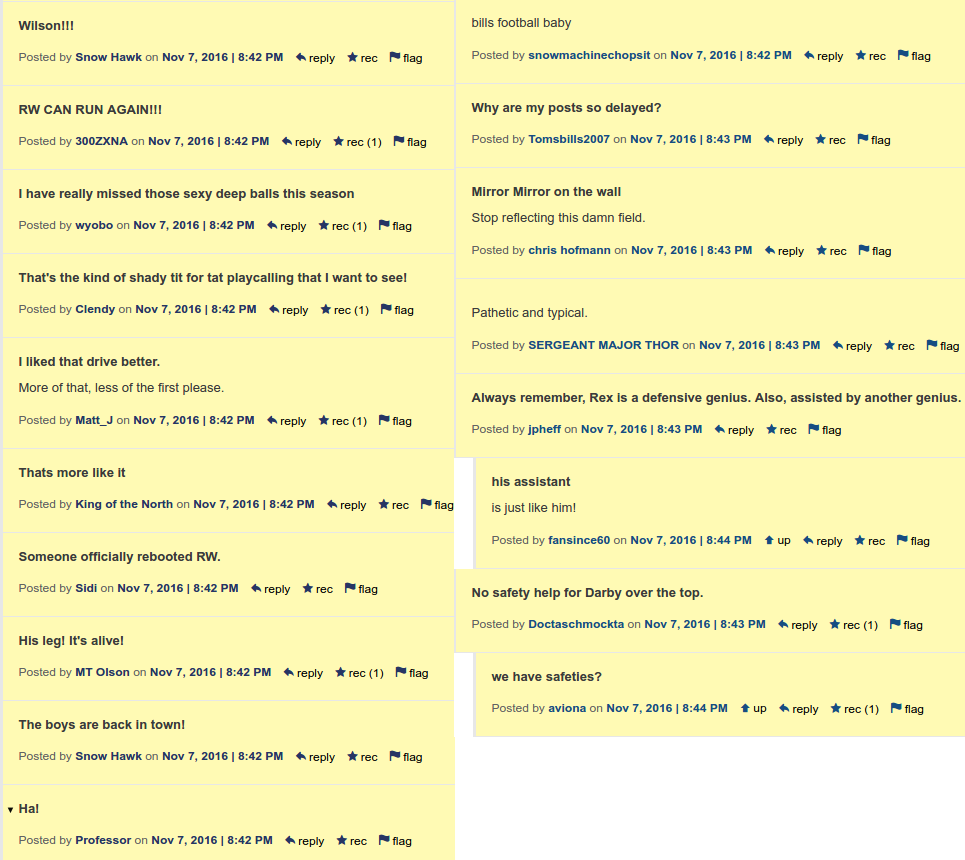 Justin Hunter gets open on 3rd and goal, Buffalo retakes the lead (14-7 BUF) 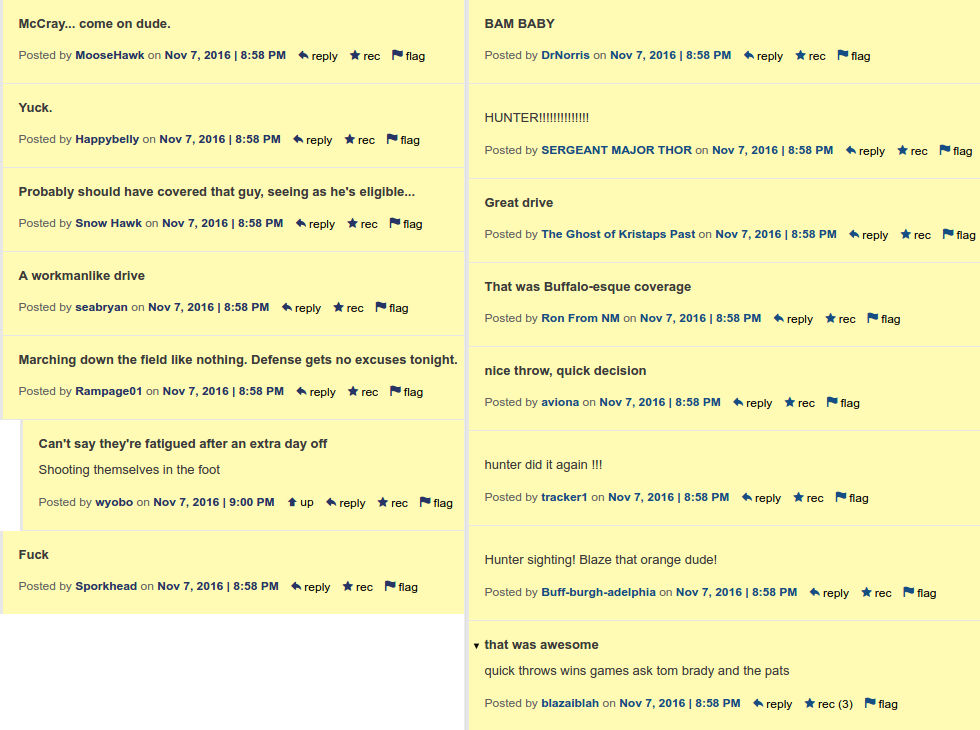 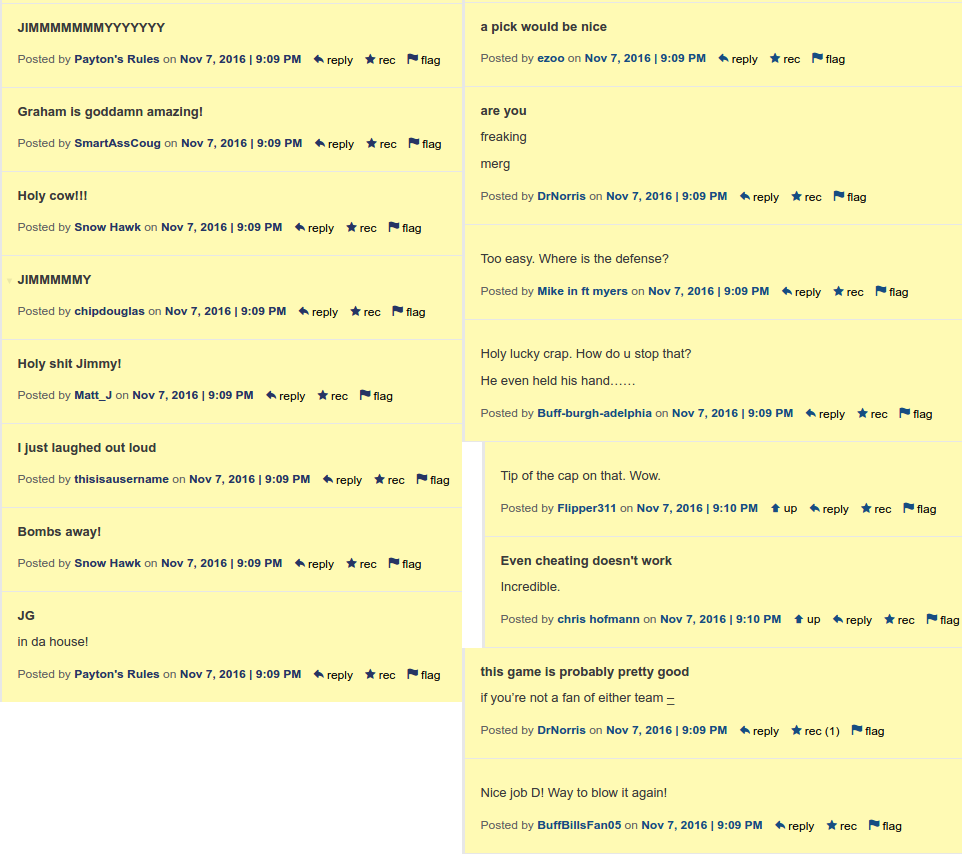 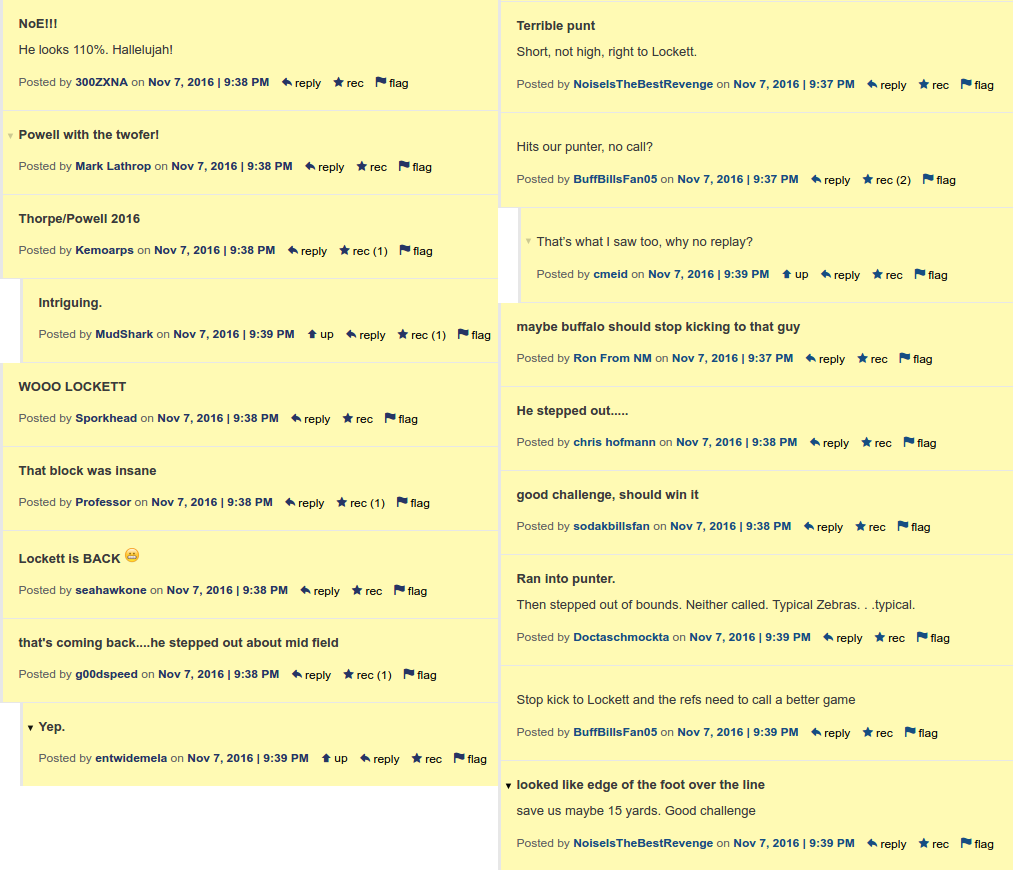 Bills commit PI on 1st and 25, Christine Michael scores on the next play to put Seattle ahead (21-17 SEA) 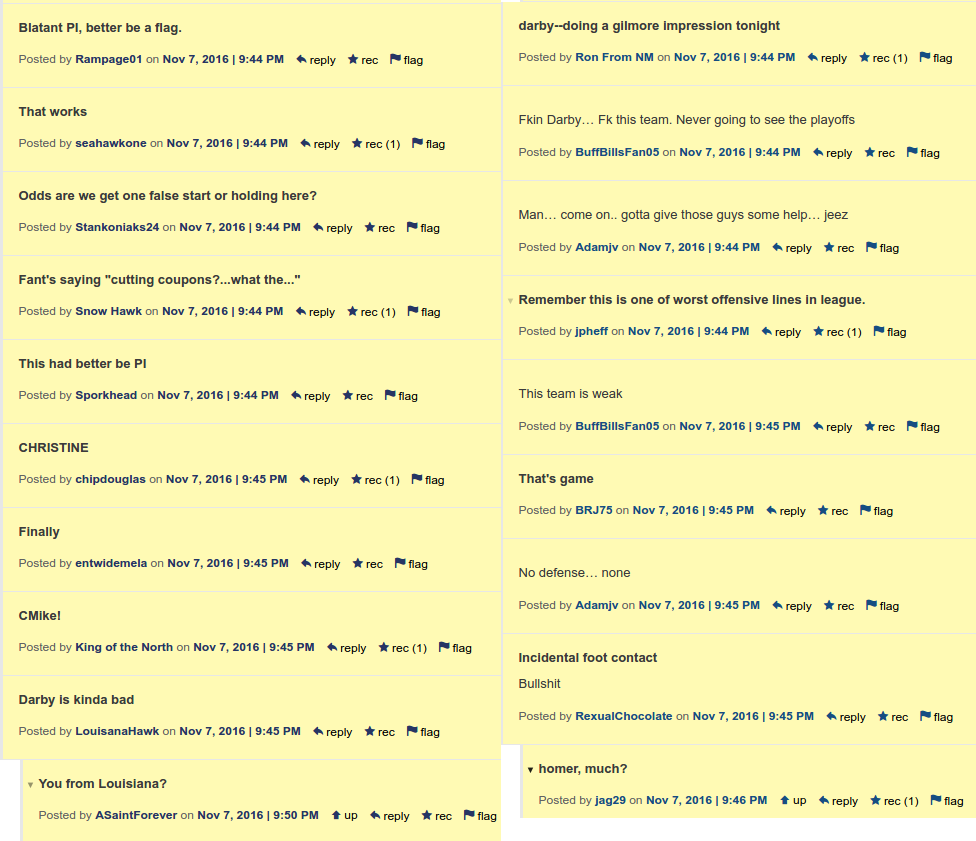 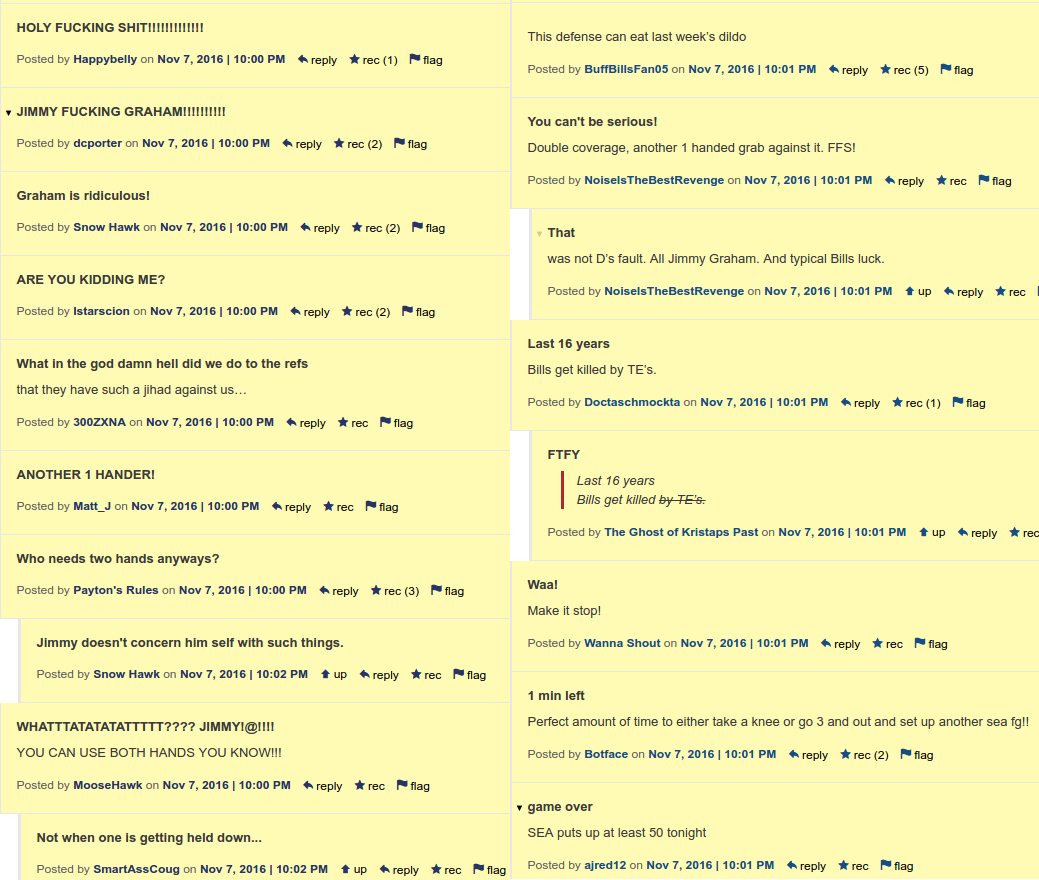 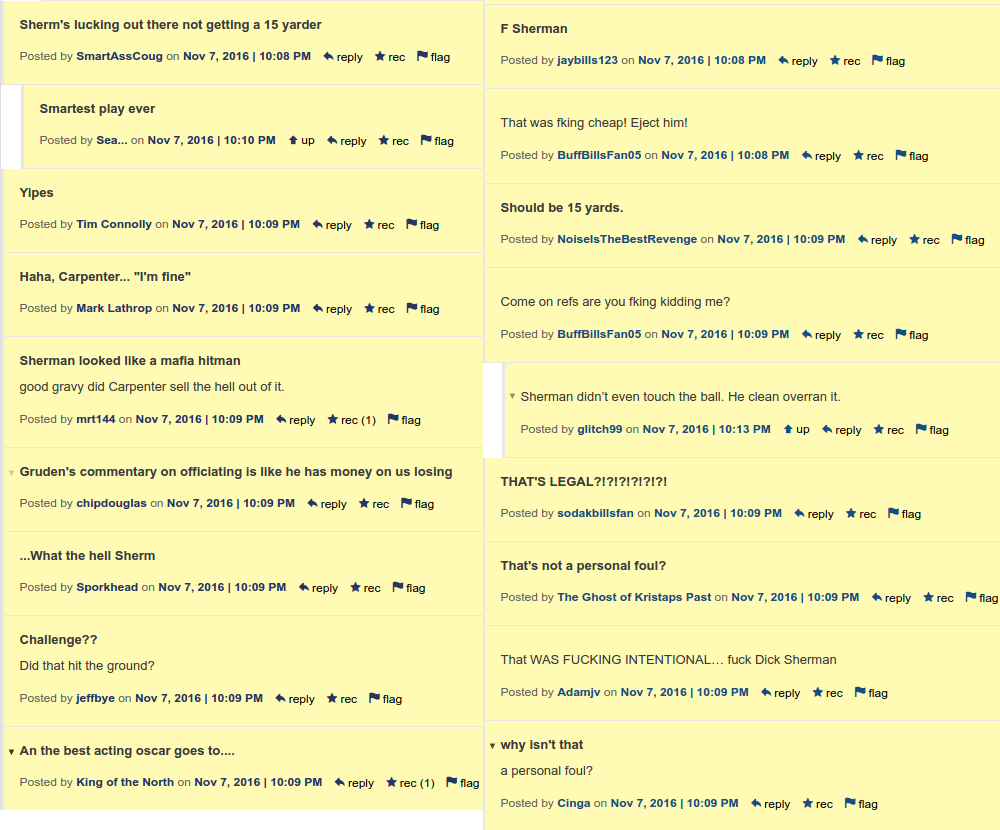 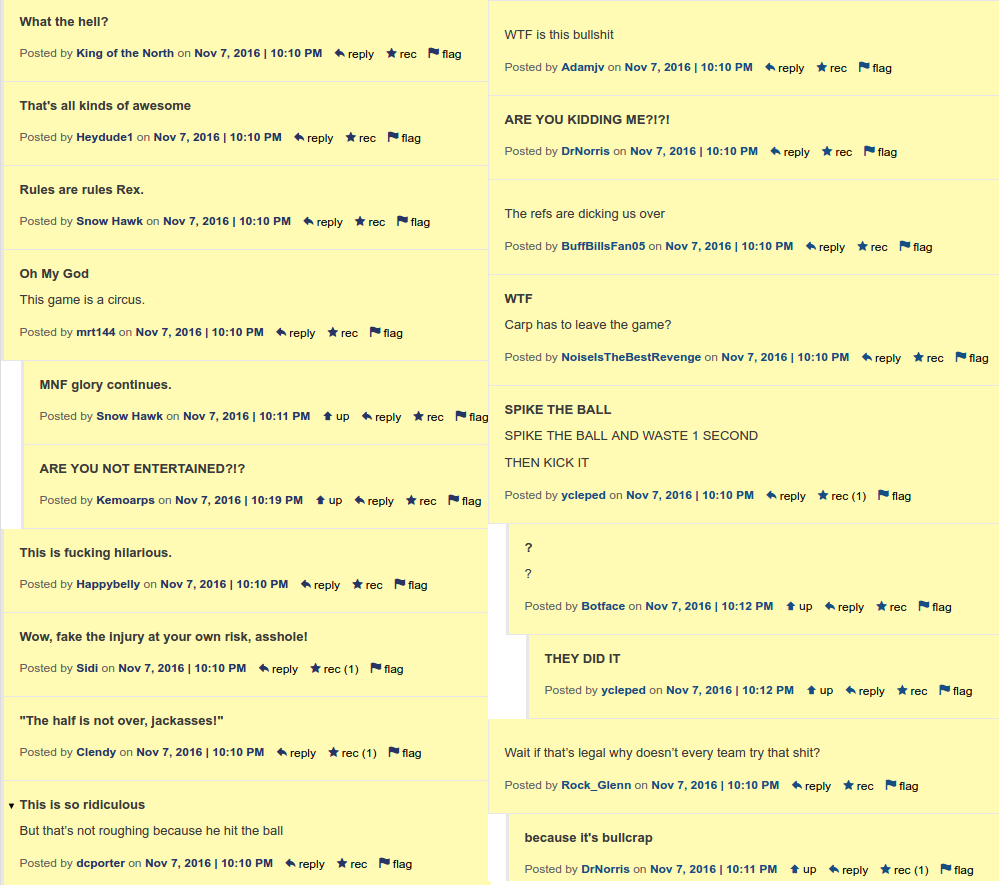 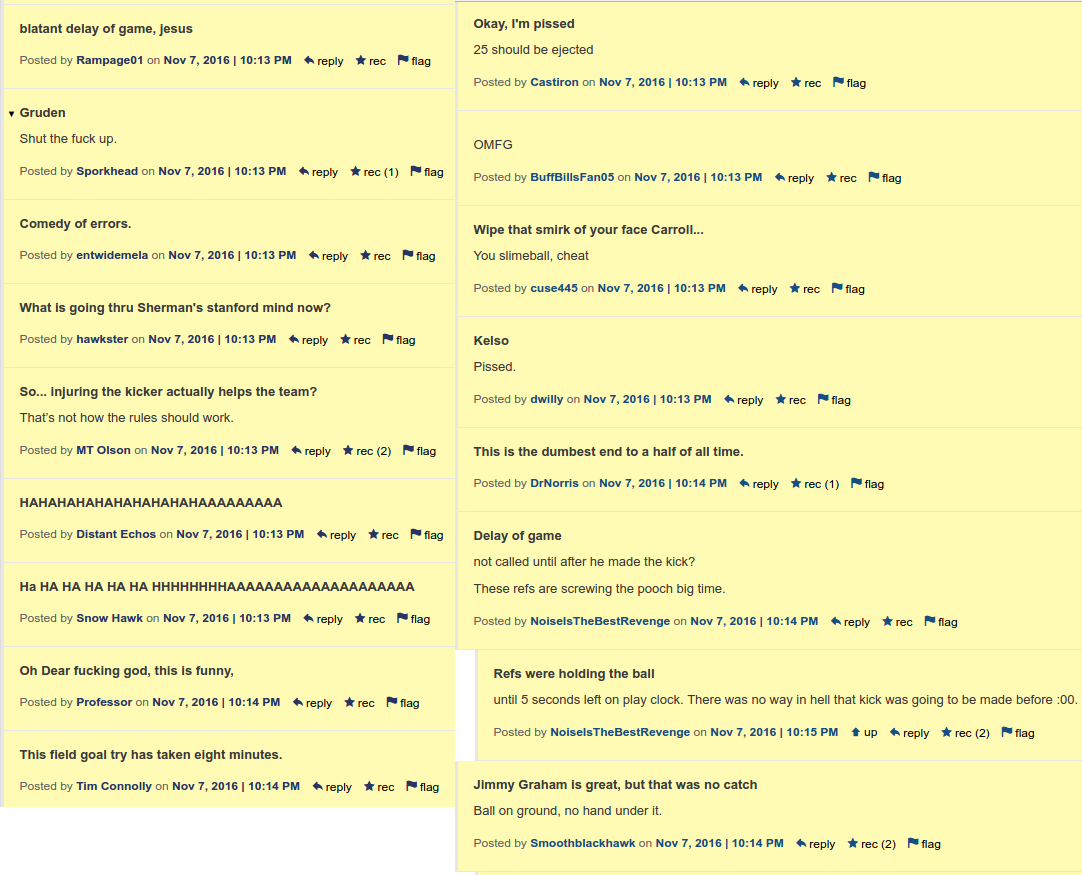 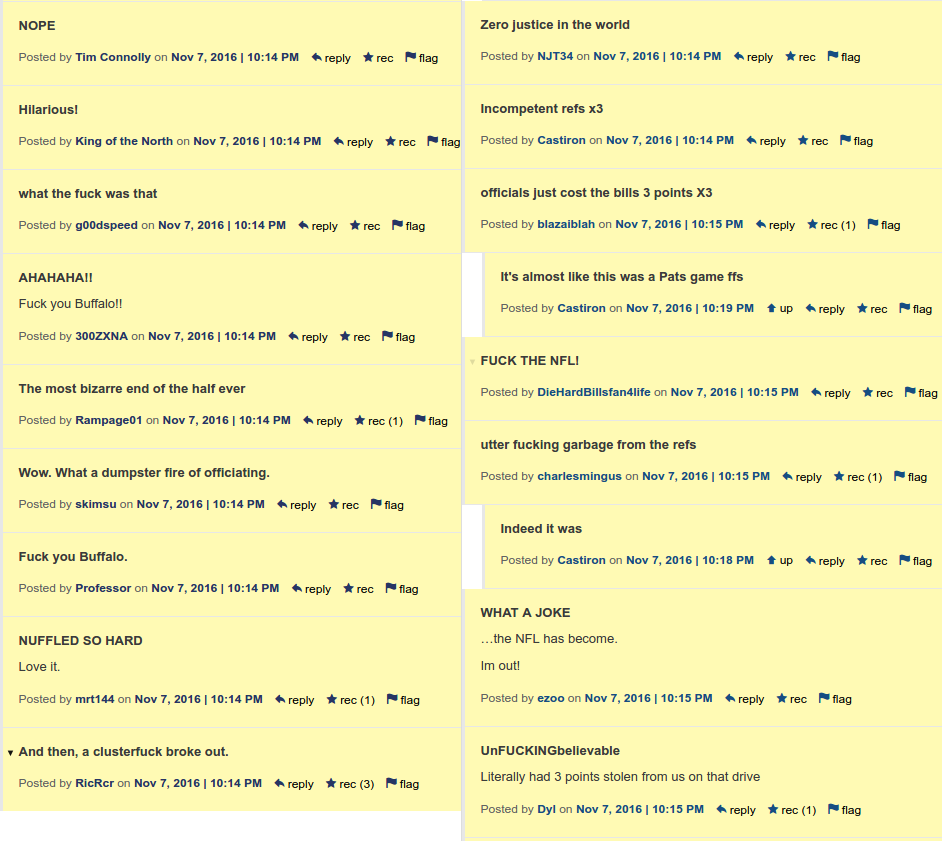 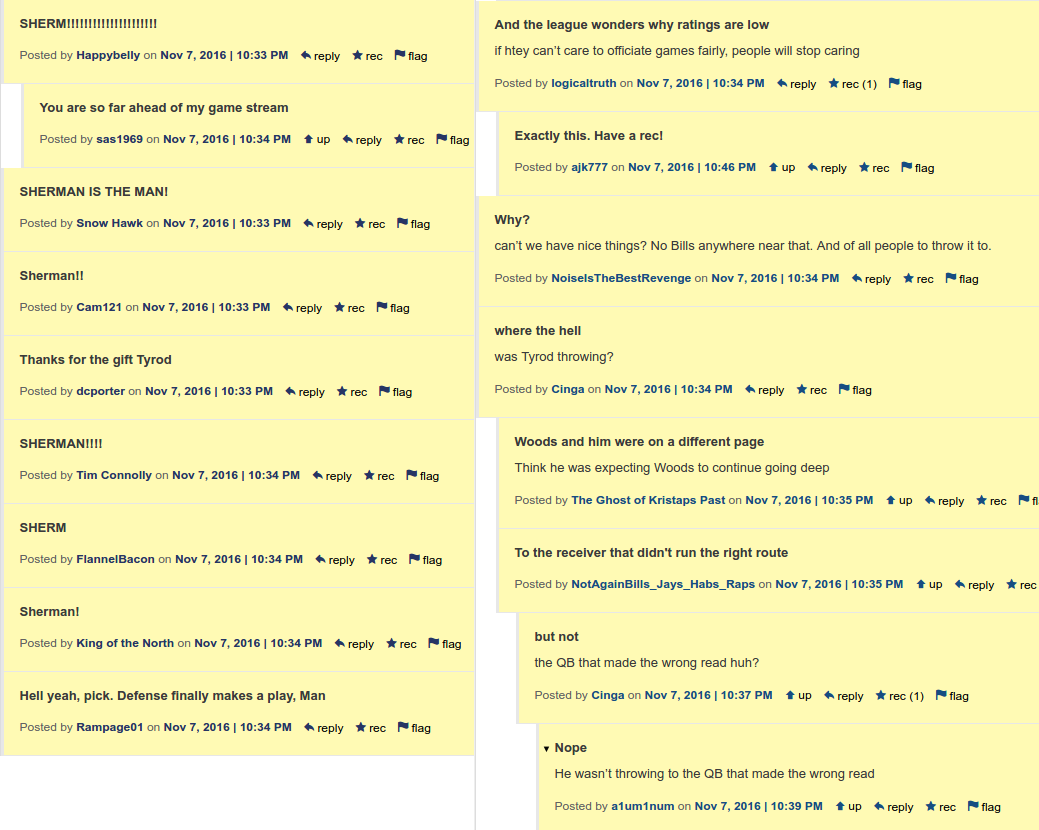 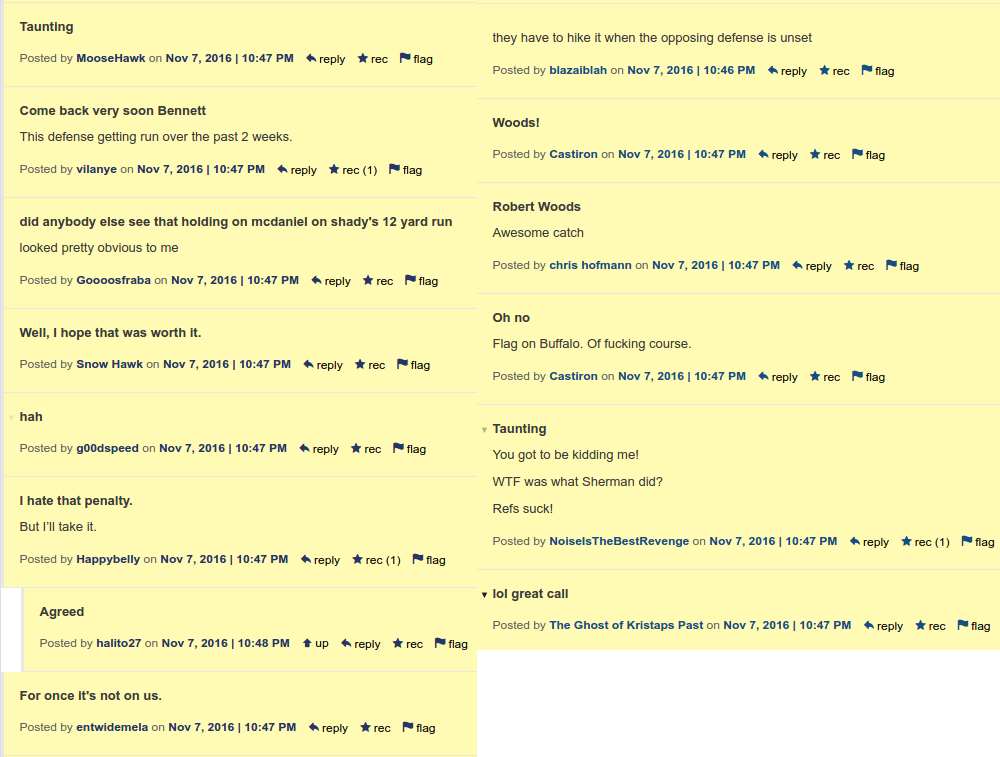 After Mike Gillislee touchdown, Tyrod Taylor cuts the deficit to 3 on a QB draw (28-25 SEA) 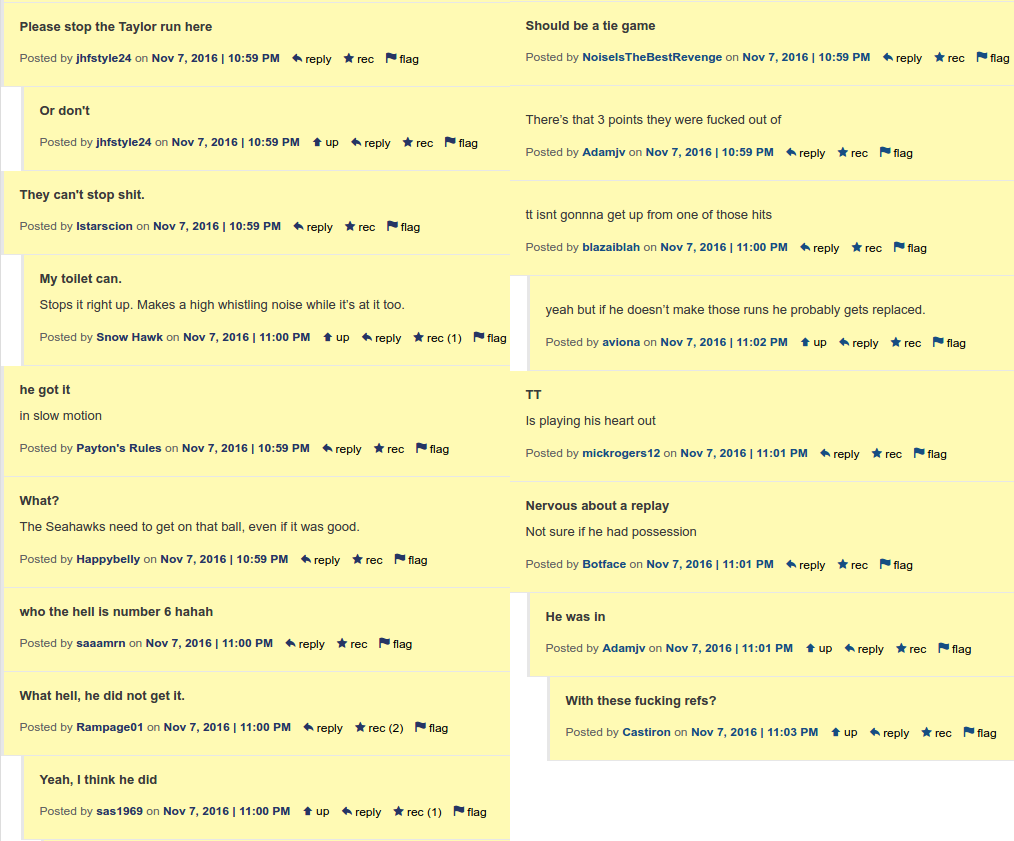 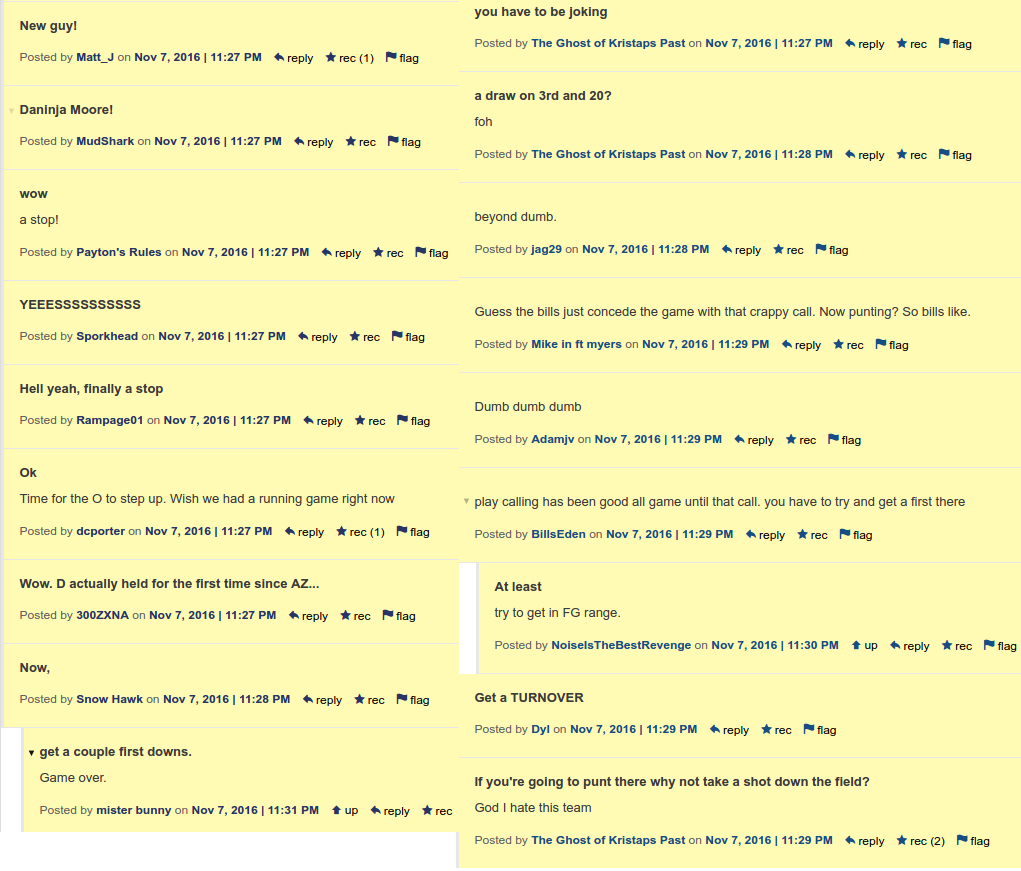 Russell Wilson gets sacked on 3rd down, giving the Bills life (31-25 SEA) 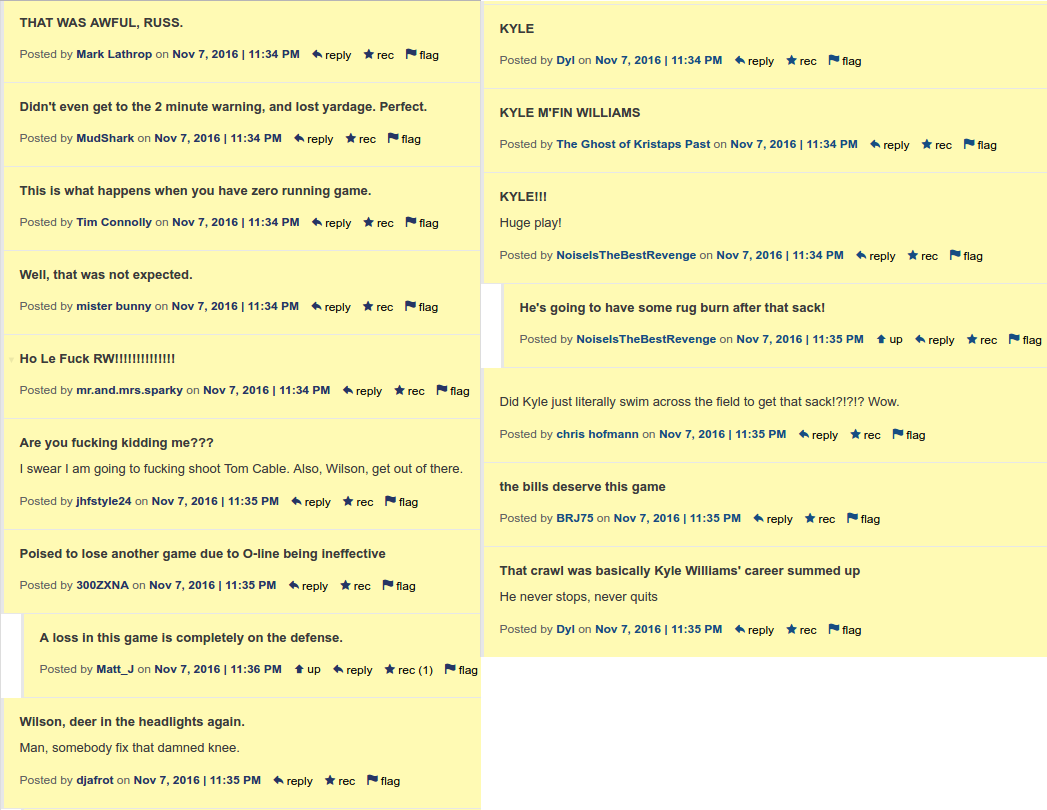 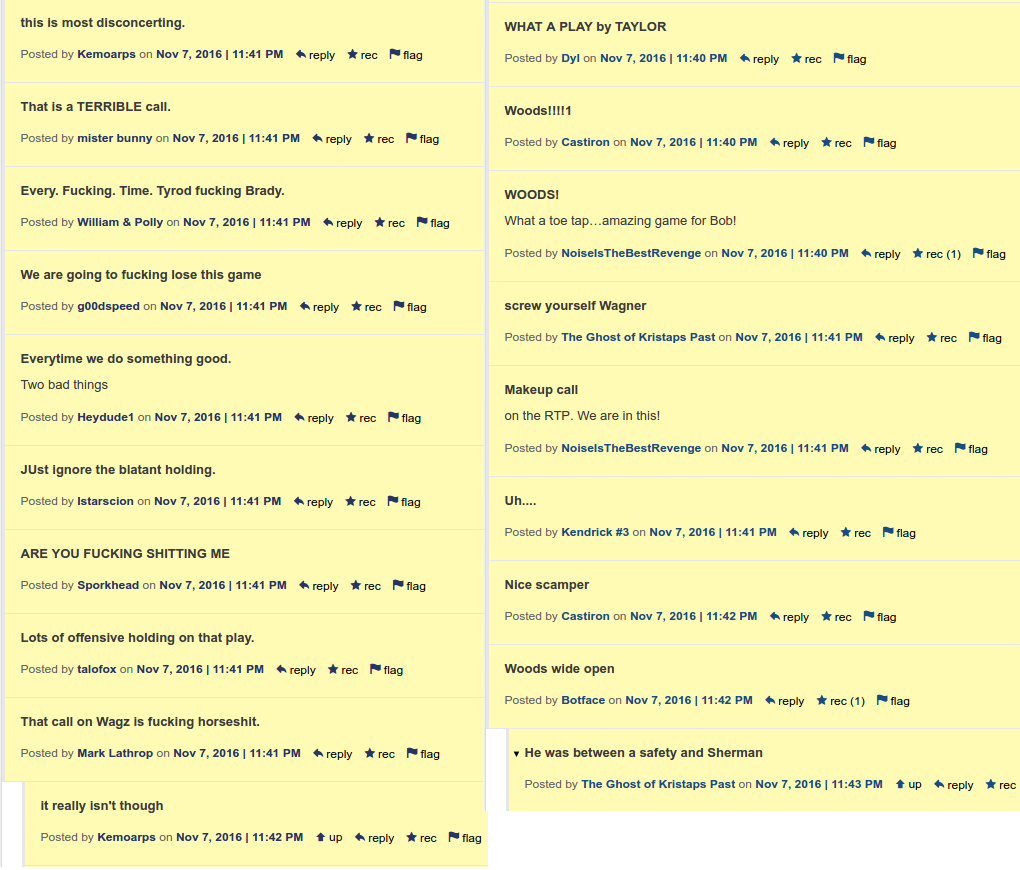 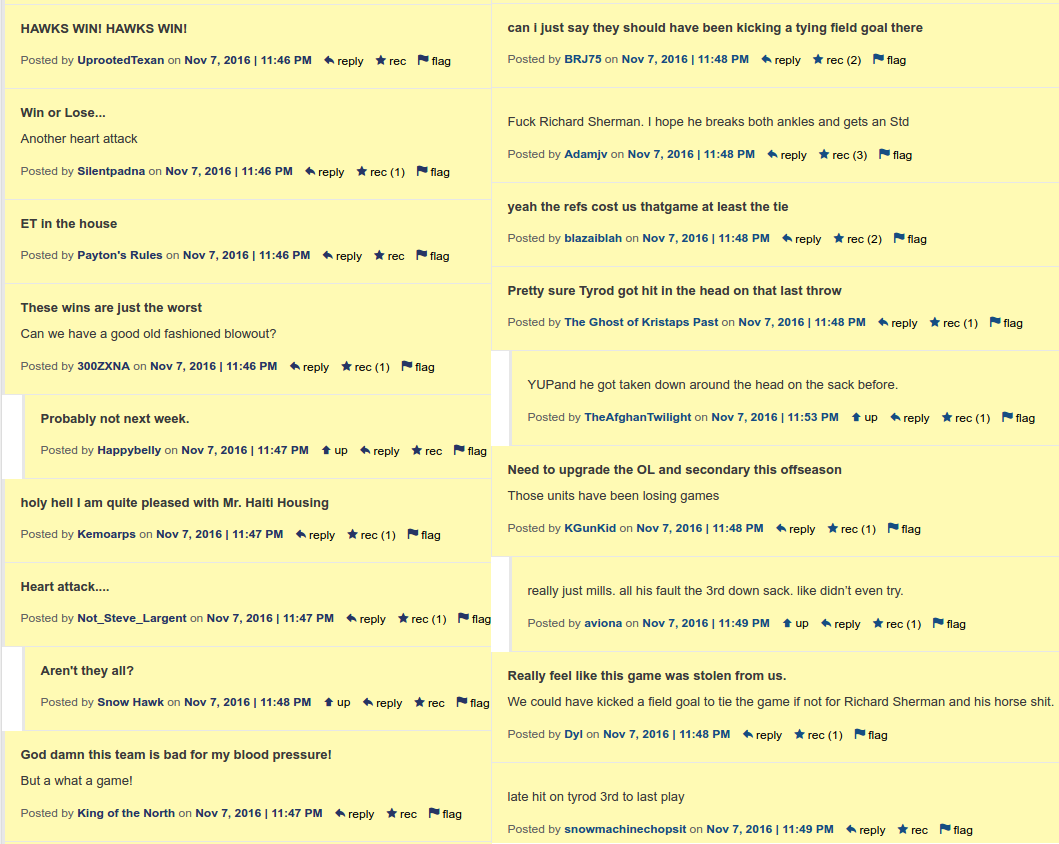 Post-Game: I still BILLieve in the BIlls

People will call for Rex Ryan's job. Oh wait, they have been since day one. In an interview with USA Today, owner Terry Pegula said the Bills need stability to be successful. Yes, yes they do. Yes, it is Rex's second year as head coach but two years is not enough. If we have learned nothing else, this coaching carousel isn't working. It is extending the drought because everyone wants a quick fix. We, the team and fans, need to be patient (mind you this is coming from a person who has little to no patience). It wasn't until Marv Levy's third year of coaching that the Bills made it to the playoffs. We all know what happened after that. Each year the team got better and better and better. Give Rex a break. There are a lot of factors here why things are not working but the bottom line is, no matter how good your coach is, it is still up to the players and the team as a whole to win games. He isn't on the field (thankfully) and can't make the plays. Is he perfect? Absolutely not. However, the best teams are the ones that have longevity at the helm. Marv Levy proved that. Tom Coughlin proved it. Bill Belichick proves it. Pete Carroll proves it.

This all brings me back to this feeling I am having of a renewed sense of faith. Will the playoffs happen this year? Probably not. That is not being pessimistic, it is being realistic. Does it stink to have to say ‘wait til next year' again? Yes. The light bulb that went off in my head after Monday night's game is the Bills have created a team with talent and can be contenders. No one picked them to win. The Bills didn't win but they proved some people wrong in that they were in the game, until the end. Even with bad calls and injuries galore, they hung in there. That speaks to something. That speaks to the core of a team that is on the brink of greatness just like they were at the end of Marv Levy's second year of coaching.

So keep the faith Bills fans. If we have to wait another year, so what? We, the real fans, will still be there next year and the year after. Sometime soon we will be those Cubs fans. Good things come to those who wait and I have a feeling our wait time won't be nearly as long as Chicago's. It's coming and when it does, it will be glorious. Don't jump off the wagon. It needs your support to keep moving. - Veronica R. Chiesi Brown, Bills Fanatics BF

OK, so the officials screwed Buffalo hard, but the Bills were in it until the end. Taylor had arguably his best game as a Bill - 289 yards with one touchdown throwing, another by rushing and one interception. He moved the ball and lead multiple, time-consuming drives. He used his legs and added 43 yards on the ground. The only thing he didn't do was drive the team to the winning score, and that's where I have a problem. Just about every week I've been noting that Taylor was not the reason the Bills lost, nor was he the reason the Bills won. It' nice to have that, but I need more from a guy the Bills are considering making their franchise quarterback. To be a franchise quarterback you need to be able to take a team and drive them to a victory. Tyrod has had opportunities to win games, but hasn't - that's something the team needs. To be a franchise quarterback Taylor need to start taking some opportunities to lead the Bills to game-winning drives - with his arm, with his feet, with his leadership.

It's hard to knock Tyrod for his play - he really has been quite good, but I don't' know if he's good enough for the enormous contract awaiting him. Statistically he's no better than a whole slew of other Bills quarterbacks, but those guys all lost games for the Bills and we have plenty of bad memories. I could easily see Ryan Fitzpatrick leading the Bills to victory in Monday's game, then coming back to throw 4 interceptions and give away the next game against the Bengals - is it better to have a quarterback who will win some for you and lose some for you, or one that does neither? Does it matter?

But enough about the Seattle game - it's not going to change. The Bills now have a losing record as they enter the bye week, and their playoff hopes are all but gone. This shouldn't be anything shocking to Bills fans - this is where we normally are in our march to 7-9 and the 12th pick in the draft. We'll be without Eric Wood who broke his leg late in the game, but hey - what's one more top player not on the field for the Bills? Maybe next year we'll avoid the injuries and bong hits that prevent the Bills from ever having all of their talent appear in the same game - wouldn't that be something? - Tony Bogyo, Bills Daily

Post-Game Video: "The worst refereed game in the history of the NFL" (BuffaloBill60) 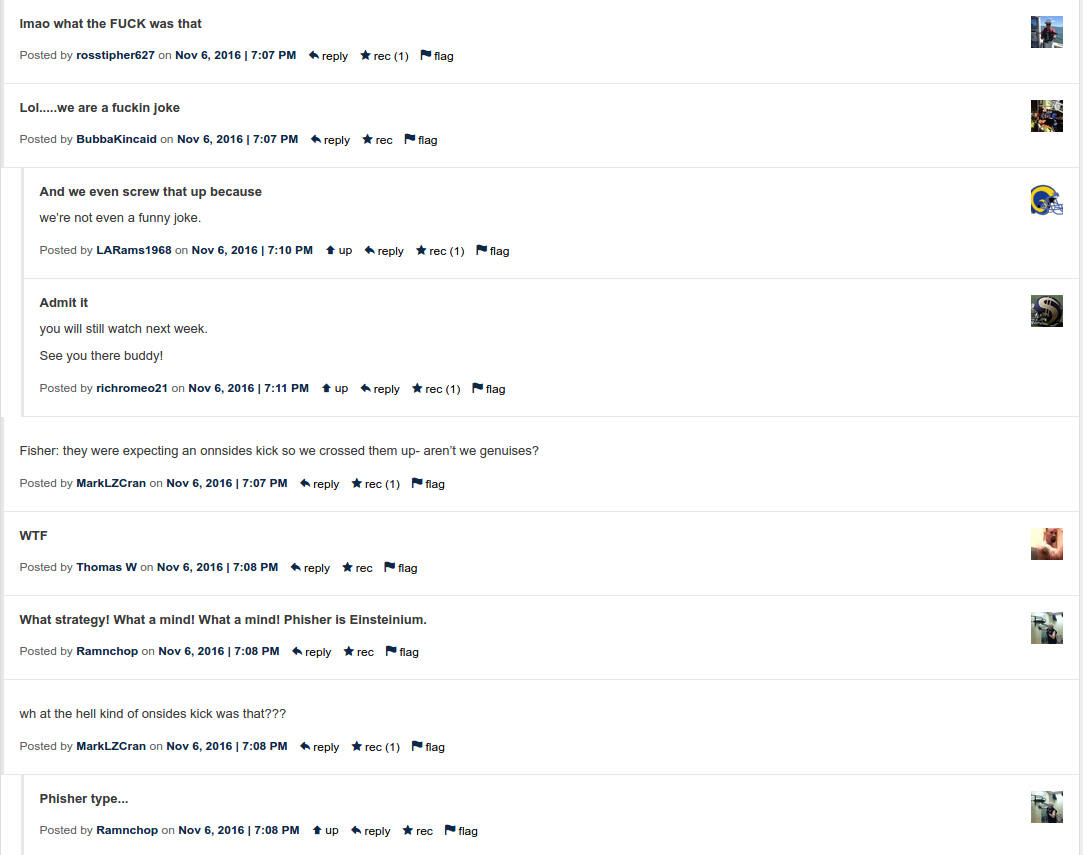 The Seahawks are in the driver's seat in the NFC West. Up next is a Sunday night game against the New England Patriots, who are coming off a bye (hence no Enemy Preaction) and are unbeaten since Tom Brady's return. The last time the Seahawks played New England in the regular season, Russell Wilson engineered a miraculous comeback from 23-10 down to win 24-23, in what I personally hold as one of the more memorable wins in franchise history. Seattle and New England did meet each other in the Super Bowl two years ago, and that's the only thing I will say about that.

This first half of the season was a bumpy ride, and Seattle has managed to go 5-2-1 with a sagging running game, a banged up defense, and a banged up quarterback. The Wilson-era Seahawks have been all about the 2nd half surge, and another one this year would surely clinch a 1st round bye.

Thanks for reading and Go 'Hawks.