Last night's game may have been a Thursday Night Poopfest, but it was a poopfest that clinched the NFC West for your Seattle Seahawks, and it snapped the three-game losing streak to the Jeff Fisher-less Los Angeles Rams. That means it's time for Enemy Reaction.

Believe it or not, this is the first time in 5 years I've done an Enemy Reaction for a Seahawks win over the Rams. Reasons for the lack of them for the Rams are varied. In 2012, I had just moved cross-country and didn't have the proper tools necessary for an Enemy Reaction. The 2013 MNF win on the road was too much of a shitshow for me to even bother with it. Lack of game thread comments on Turf Show Times presumably led me to spare the Rams for the home wins in 2013 and 2014.

This year, I don't give a shit. They don't even get to "enjoy" 7-9 bullshit. Instead their best hope is 6-10 cesspool. TST only had about 550 comments for the entire game. Who cares? Let's get right to the nitty-gritty of the mostly shitty football that was played last night.

This was initially ruled short of the 1st down (0-0) 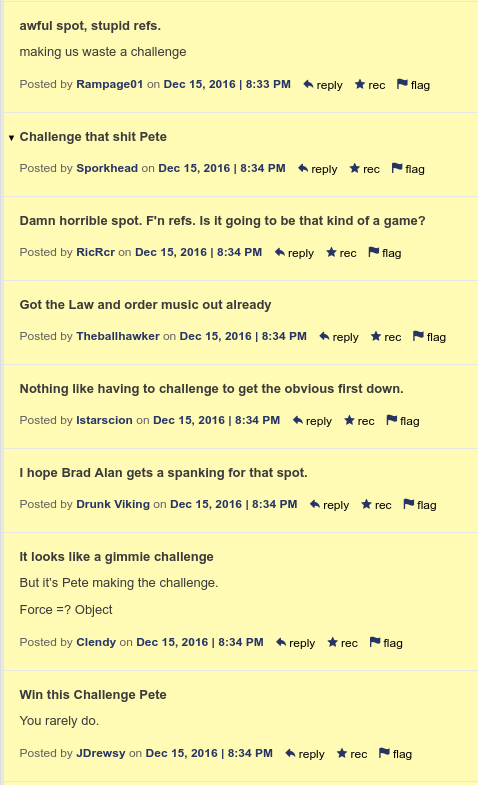 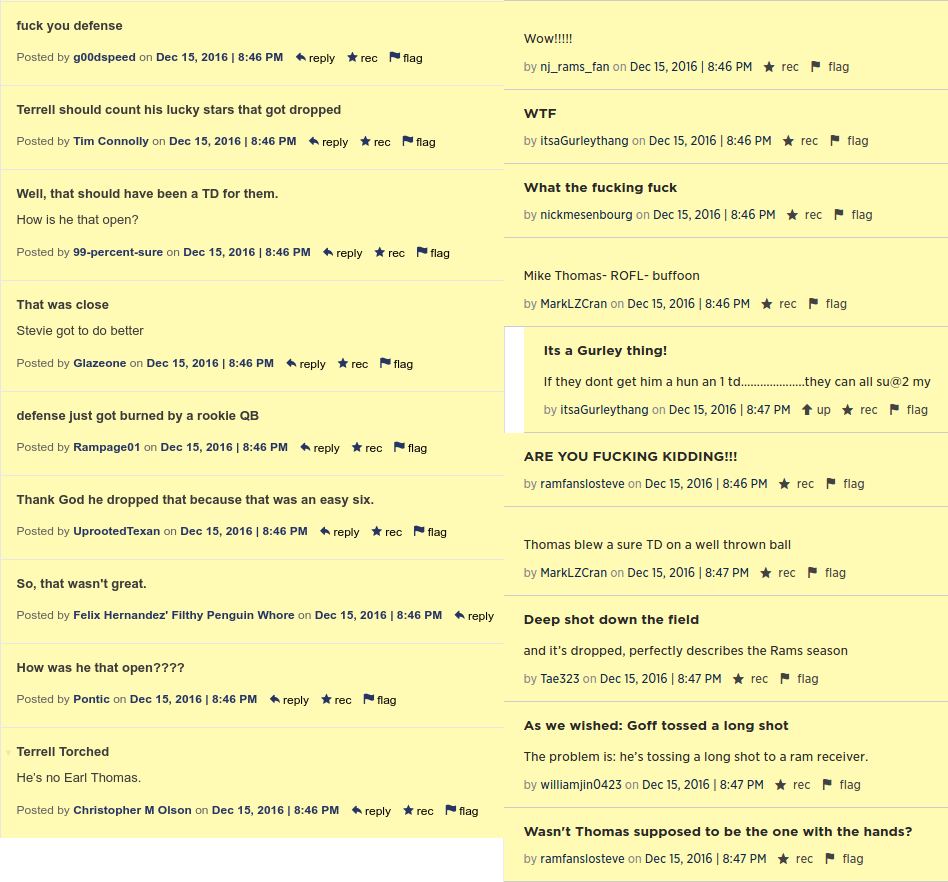 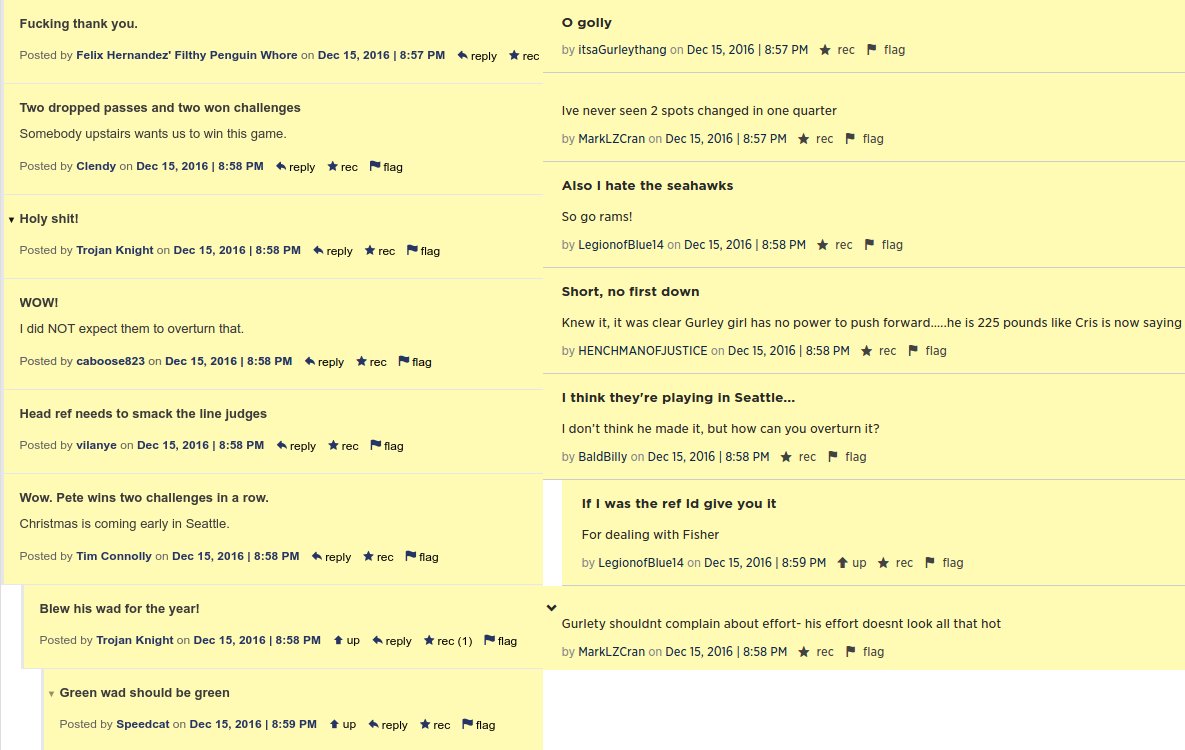 Seahawks fail on 4th and 1, but Rams commit a penalty, then Russell Wilson throws a touchdown to Luke Willson (7-0 SEA) 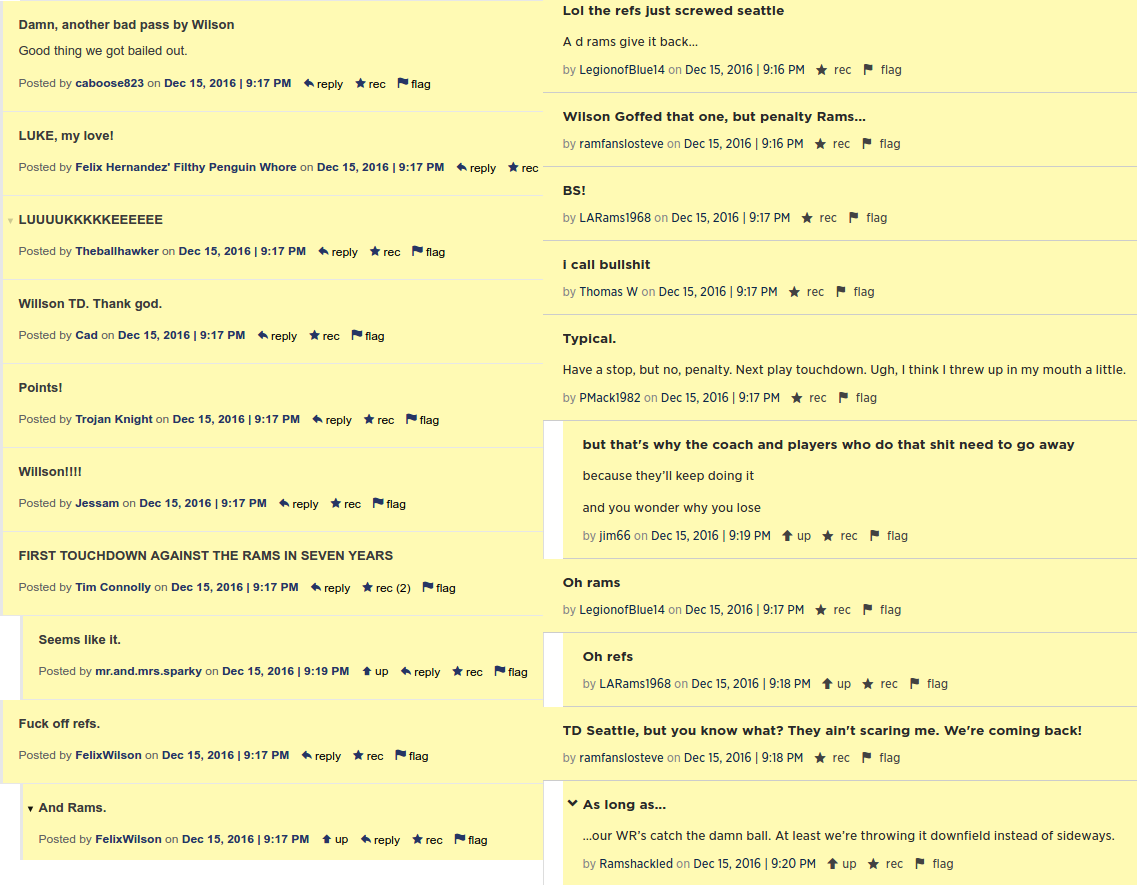 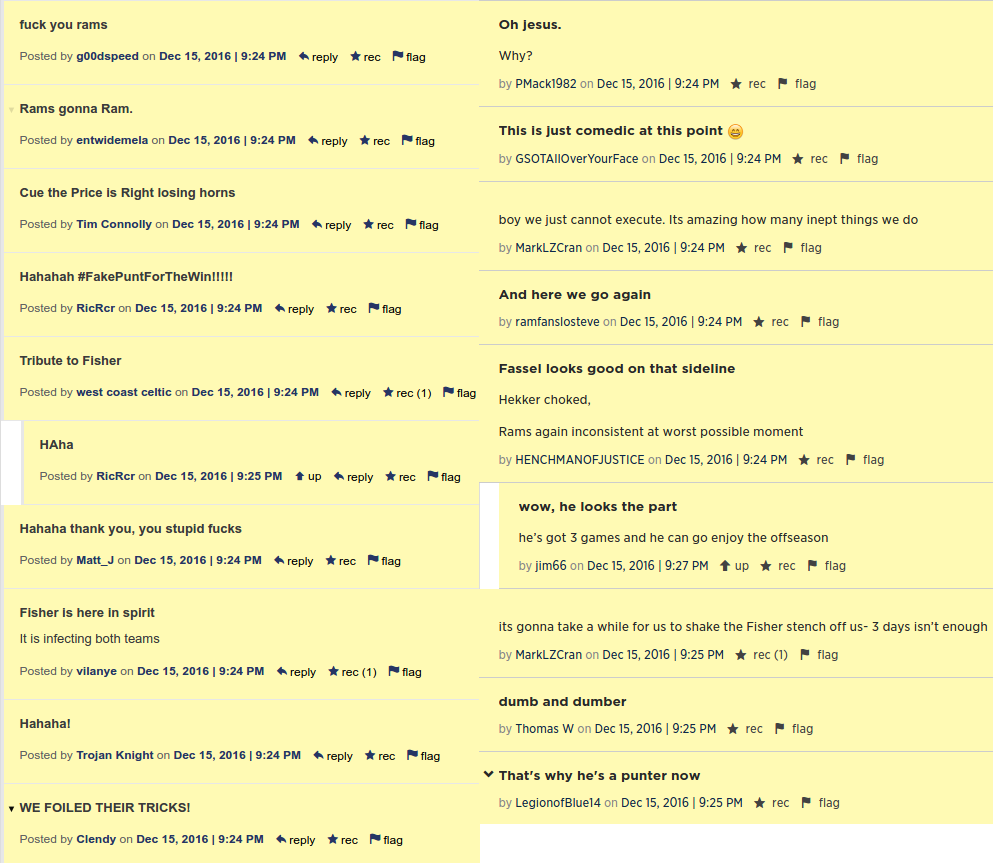 Russell Wilson nearly picked off by Bryce Hagar in the end zone, but call on the field stands (10-3 SEA) 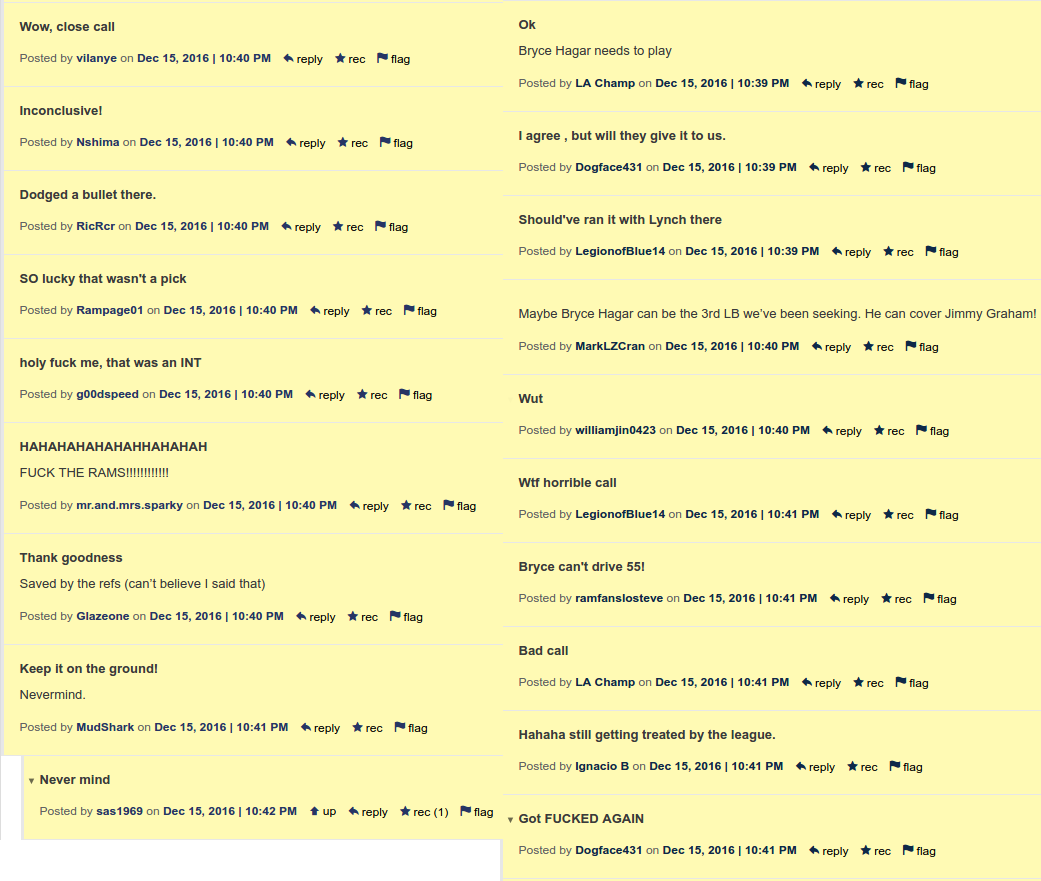 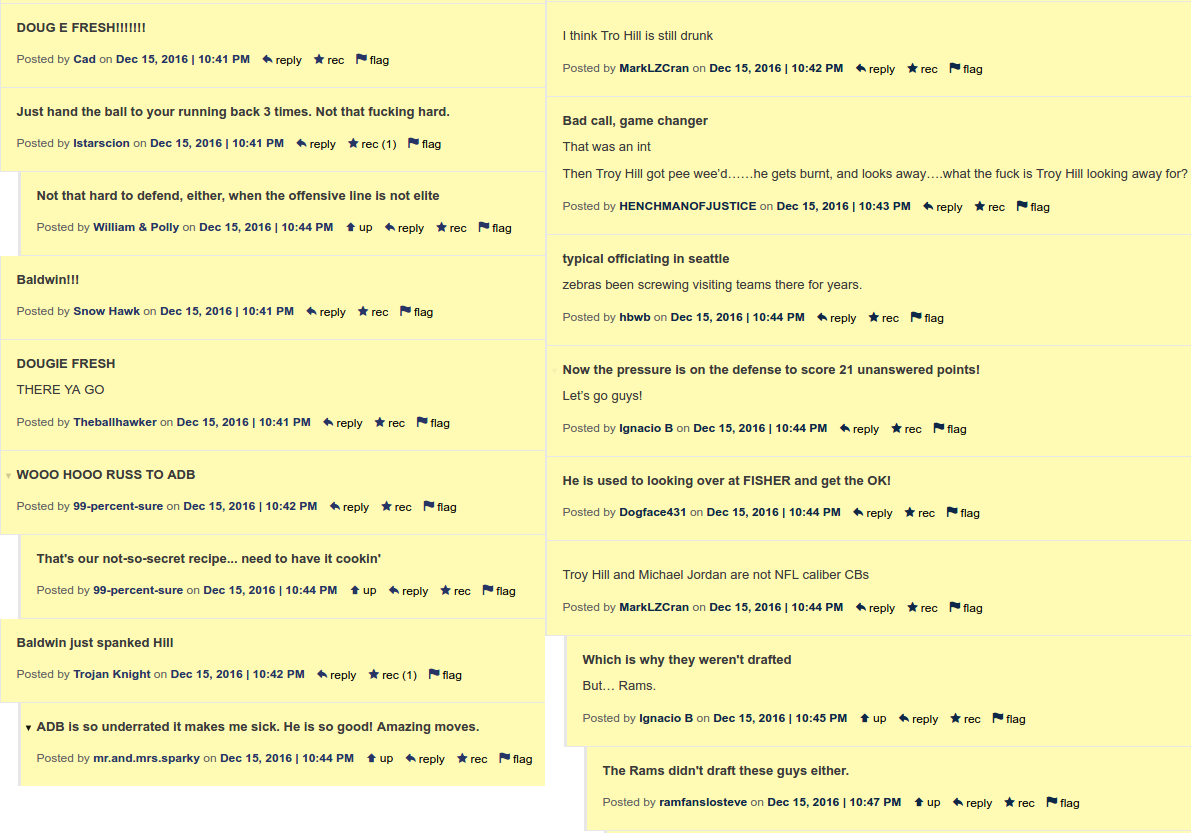 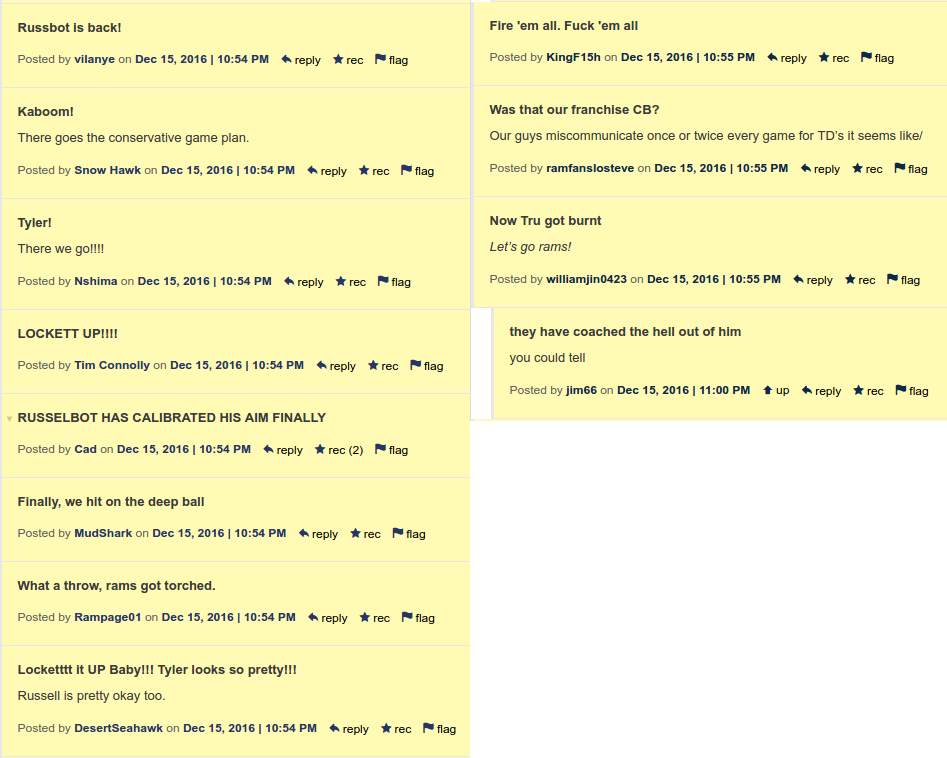 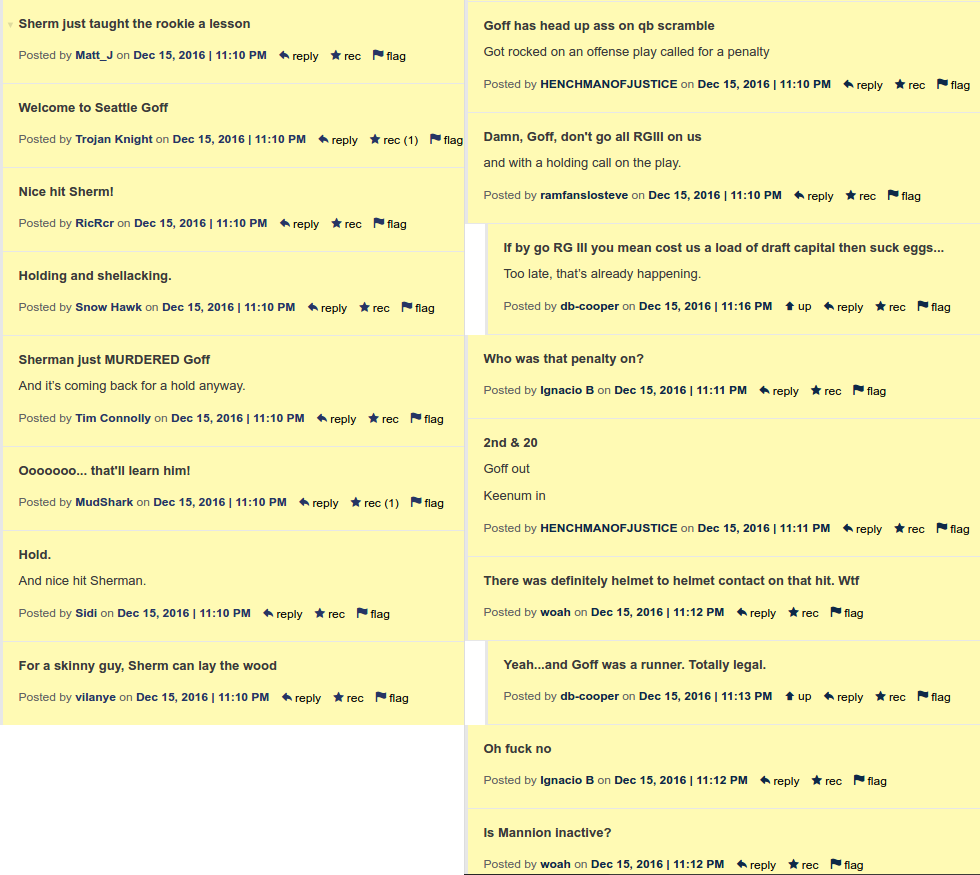 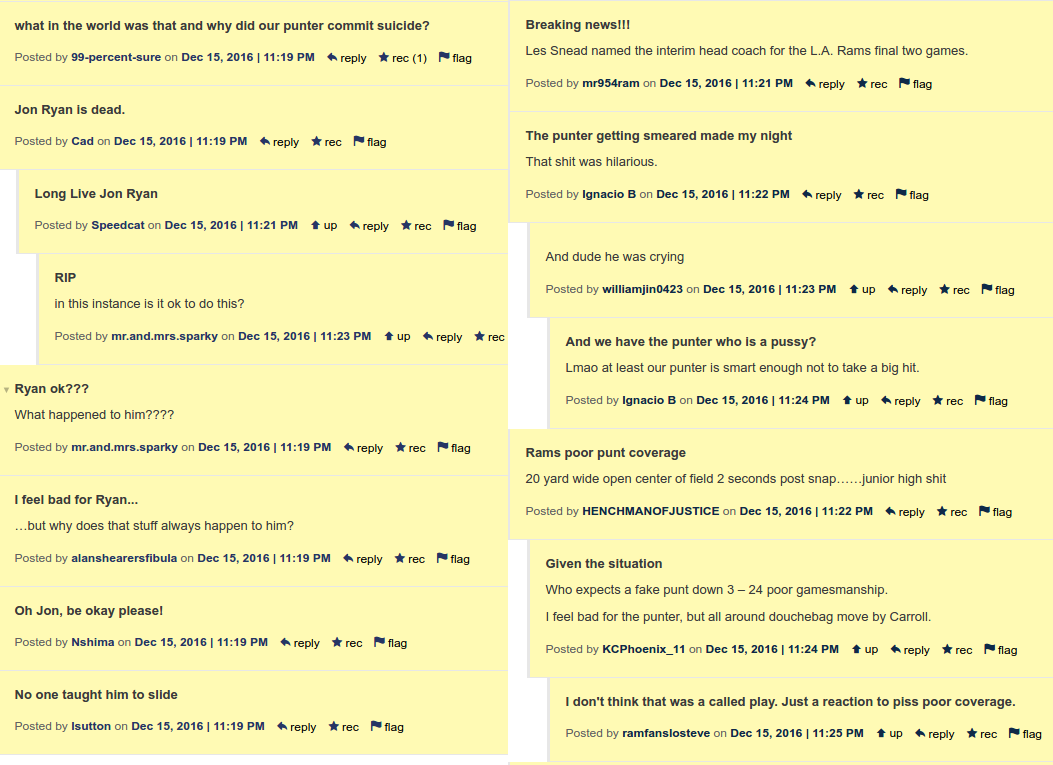 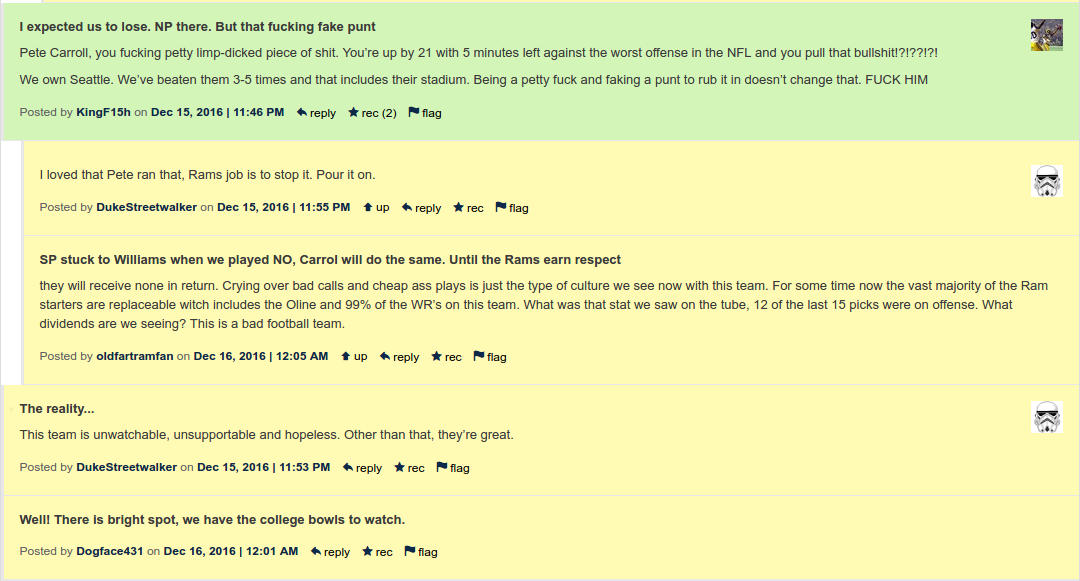 Post-Game: It'll take more than firing the coach and changing QBs to fix the Rams

What, you thought getting rid of Jeff Fisher was suddenly going to transform the Rams into the '85 Bears?

Not that kind of party folks.

The makeover will begin after the New Year. There is a new coach to hire. A fresh vision and culture to usher in.

That takes time. Could be years, even.

No matter how bad it had gotten under Fisher, no matter how much everyone wished the hopeful voice of interim coach John Fassel would be the catalyst to a Rams renaissance, that was unrealistic.

Three days after letting Fisher go, the Rams were the same old Rams in a 24-3 loss to the Seattle Seahawks Thursday night under a dark, cloudless Pacific Northwest sky that offered a cold, uncaring shoulder to a fragile team reeling from unmet expectations, another season gone sideways and the sudden dismissal of a coach for whom fondness never translated into consistent winning.

It all looked so familiar. - Vincent Bonsignore, LA Daily News

Goff has been bad in the sense that we don't know how good he actually is. During his college years, he knew how to shine.

His time in Los Angeles has been nothing short of a different story.

With the loss, the Rams lose their fifth consecutive game. The team also falls to 4-10 on the season, with two home games remaining — both against division rivals.

While the road ahead doesn't look wonderful for the Rams, it's the opposite for their opponent. Seattle has now clinched the NFC West division title, as the Cardinals won't keep up even if they win out.

It helps shape the playoff picture, but the state of the team is still unknown. In all irony, not having Jeff Fisher around to blame anymore might be a harder place to be.

Whoever steps up next won't make a serious impact until next season, though.

So let's let this be our learning curve for Goff — it's only fair. - Keith Rivas, LA Sports Hub 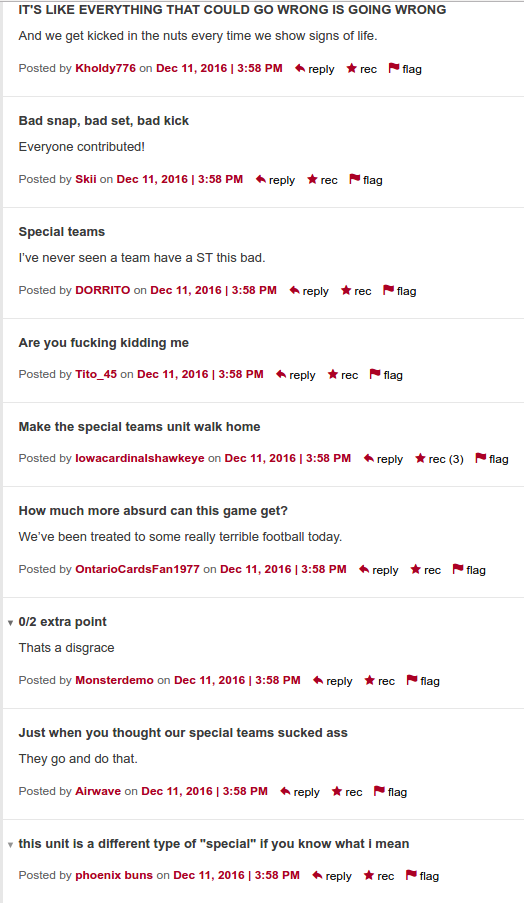 With Seattle sitting at 9-4-1, all they need to do is win against Arizona and San Francisco, combined with the Lions losing 1 of their 3 games against the Giants/Cowboys/Packers gauntlet, and the #2 seed is theirs. For the extremely unrealistic greedy, if Seattle wins out, the Cowboys lose out, and the Lions lose to the Giants or Packers, then Seattle wins the #1 seed. Whether it's the 1 or 2 seed, I'll take a first-round bye, noting the importance of getting CJ Prosise back for Divisional Round weekend.

Up next are the Cardinals, who will likely be mathematically eliminated from postseason play by the end of this weekend. As it turned out, those who believed the 6-6 tie benefited the Seahawks more then Arizona were 100% correct. At 6-7, Arizona would have a fleeting chance at a wild card berth, but at 5-7-1, they're just about toast. The tie also helps the Seahawks in the #2 seed race with the Lions, as Detroit holds the tiebreaker over Seattle based on superior conference record. I think a fully-fleged beatdown of Arizona next Saturday would serve as a great Christmas gift, and it would confirm a 5th straight 10+ win season for the Seahawks, who'd previously never had consecutive 10+ win seasons prior to 2012.