The Seattle Seahawks defense has been historically great for the past 5 seasons. We, as fans, have been spoiled by this run of dominance. Four straight years with the #1 scoring defense, and while they won't finish #1 this year (unless the Patriots just don't field a defense vs. Miami), they'll be somewhere between 2nd-5th, which is still pretty damn great. You could make the argument that even with the loss to Arizona, the Seahawks have relied on the defense to close games out against Miami, Atlanta, Buffalo, and New England in the final seconds, and they succeeded every time. It's effectively the difference between the Seahawks having a shot at the #2 seed and being completely out of the playoff picture, and that's not hyperbole.

And yet, there's just one thing missing, and it's been missing since the Super Bowl season, but it's really glaring now.

I've written about this before, but not particularly in great detail. Pete Carroll teams pride themselves on minimizing turnovers on offense, and emphasizing takeaways on defense. Turnover Thursdays is part of Seahawks practice, and as I gather, Bobby Wagner makes a delicious Apple Turnover, but that's beside the point. The Seahawks are currently -1 in turnover differential, which is the worst it's ever been since Russell Wilson was drafted. While Seattle's offense has 18 giveaways, which is below average and only 2 more than last season, the defense has only forced 17 turnovers (11 interceptions and 6 fumbles), and with 1 game left in the regular season, it's a franchise low (including the 1982 strike-shortened year). The current franchise worst is 20 from the dreaded 2008 season, although they turned 4 of those into defensive touchdowns.

Now, you may be wondering if the lack of takeaways is something that's unique to the Seahawks, or if it's a league-wide trend. The answer is both yes and no. Turnover averages as a whole are down from even 9 years ago, and there's been a consistent downward trend over the past 4 seasons, as this hastily-done line graph shows. 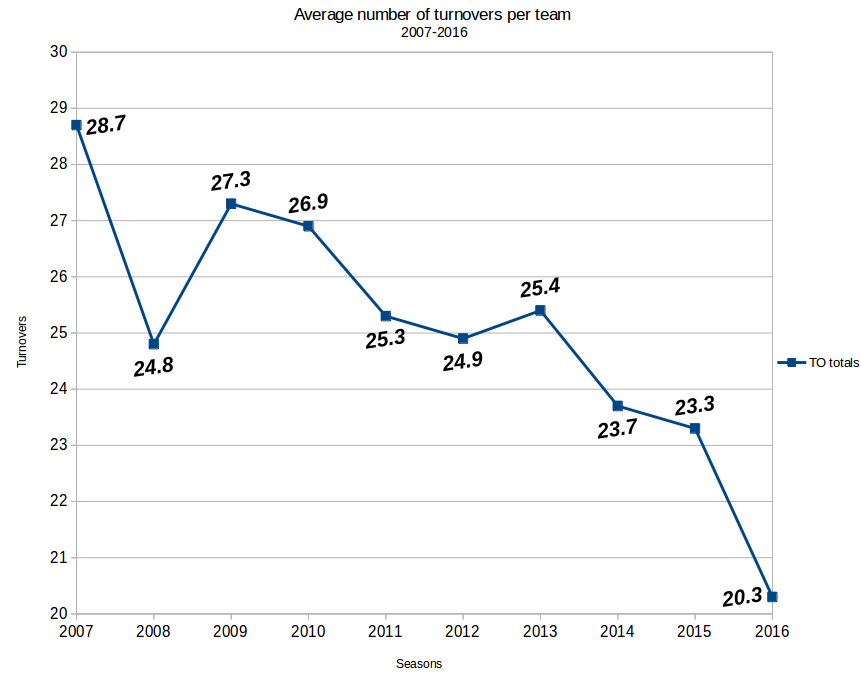 There would need to be 96 turnovers over the final 16 games of the regular season for 2016 to be on level terms with 2015, and while Ryan Fitzpatrick will try his hardest, I don't think we're suddenly going to get more than double the weekly average.

That's the "yes" part. The "no" is the fact that Seattle has been no higher than 16th in takeaways in each of the past 3 seasons (this one included), so turnovers are dropping throughout the league, but Seattle has completely nosedived.

So here comes the next question, is there a correlation between having a high defensive ranking (DVOA) and ranking among the best in takeaways? I've created a table for the top 10 defenses by DVOA from 2012-2016, added their takeaway ranking (with total takeaways in parentheses), and then subtracted the difference. If the takeaway ranking is higher than the DVOA ranking, it will have a "+" sign next to it, and a "-" sign if DVOA ranking > Takeaway ranking.

In case you're wondering, Kansas City leads the league in takeaways with 31, but are 12th in Team Defense DVOA. In 2nd place is Oakland (!!), with 29 takeaways but a defensive ranking of 22nd!

The evidence is very clear: Seattle has a turnover problem, and the disparity is staggering. This will be 3 straight seasons of finishing in the top 5 in Team Defense DVOA but nowhere near the top-10 in takeaways, which is completely unlike how 2011-2013 panned out. It is also important to note that some turnovers are created on special teams, so in case you're wondering about muffed punts and fumbled kickoff returns, they recovered 3 in the 2014 seasons, and none in 2015-2016. The spigot has been mostly shut off.

What's the solution? I have absolutely no idea. Have opposing offenses figured out the scheme to the point where they can minimize turnovers even if they perform poorly? Perhaps, but I'm not the guy to give that answer. Some of the turnover woes can be attributed to bad luck. The wacky tip-drill INTs that were so frequent in the 2012-2013 years have been seldom found in recent seasons. How often have you seen a play like this over the last 3 years?

We've also seen multiple dropped interceptions, including one inadvertent collision that cost Earl Thomas his season. There are also arguments that Seattle is forcing fewer turnovers because they're not playing with big leads that make teams take more chances. While that could be true, that also wouldn't explain a team such as Kansas City, who've only managed 4 wins by double-digits all season. As for Seattle, when up by at least 9 at any point in the game, they've forced 11 turnovers in 2013, 7 in 2014, 4 in 2015, and 6 in 2016.

With the playoffs looming, 3 of the teams currently in the postseason as it stands -- Detroit, Atlanta, Dallas -- are in the bottom 10 in giveaways. The Giants are 4th in giveaways, and their offense is tailor made for Seattle's defense to feast on and get some turnovers. Then again, Arizona is 5th and Seattle's only takeaway in 135 minutes of football was a David Johnson fumble that Seattle otherwise did not force themselves. The LA Rams are 8th in giveaways and Seattle couldn't intercept either Case Keenum or Jared Goff.

If there's any bit of encouragement you want out of these eye-opening statistics: The last time a team won a Super Bowl despite ranking in the bottom-half in takeaways was the 2007 New York Giants, who finished 23rd (25 takeaways) but recorded 7 takeaways in their 4-game postseason stretch, including a forced fumble on Tom Brady at the end of the 1st half of Super Bowl XLII.

Maybe we'll see things turn around in the playoffs, but for now, it looks as if the era of the Ballhawk Seahawks has seemingly come and gone.