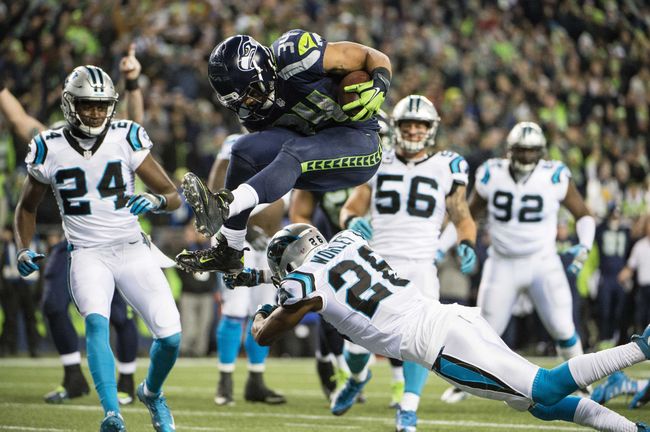 The Seahawks rebounded from a horrific offensive performance against the Buccaneers by slaughtering the Carolina Panthers in front of a primetime audience. Chiefs-Falcons honestly should've been flexed into the Sunday Night timeslot given Carolina's slim playoff hopes even two weeks ago (the flex deadline for this weekend), but I won't complain. Seattle ended Carolina's season in the 2015 playoffs, Carolina returned the favor in the 2016 playoffs, and Seattle brutally (unofficially) ended Carolina's season in the 2016 regular season.

These two teams had played nothing but close games dating back to 2012, with the only "blowout" coming in the 31-17 win in the 2015 NFC Divisional Round, but need I remind everyone that it was a 17-10 game in the 4th quarter, whereas last night's performance was a wire-to-wire beatdown that Seattle has seldom managed this season.

Considering how heated this rivalry has become, I assume Field Gulls readers are eager to look at this week's Enemy Reaction. I think we all wanted a blowout win, and Seattle delivered. How did the Panthers fans at Cat Scratch Reader react to their team getting thoroughly embarrassed literally from the opening snap of the game? Without further ado, here are the game thread comments. 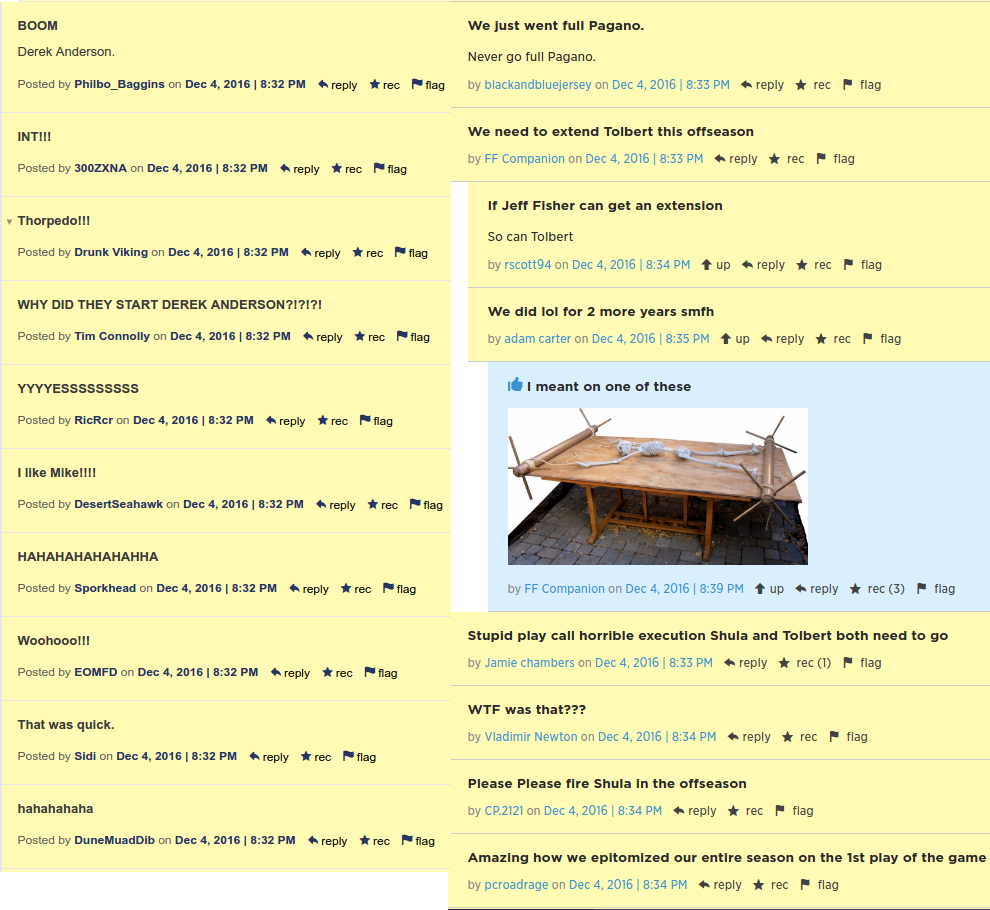 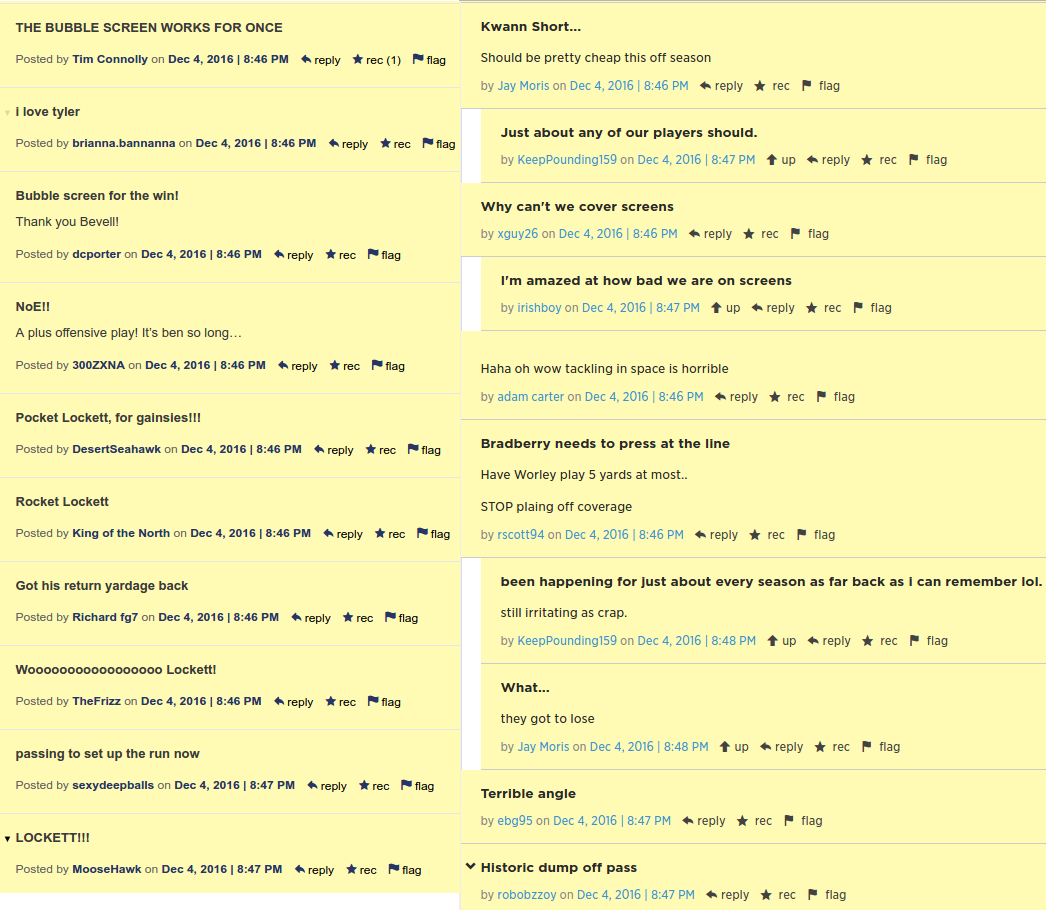 Thomas Rawls bursts ahead for a touchdown (10-0 SEA) 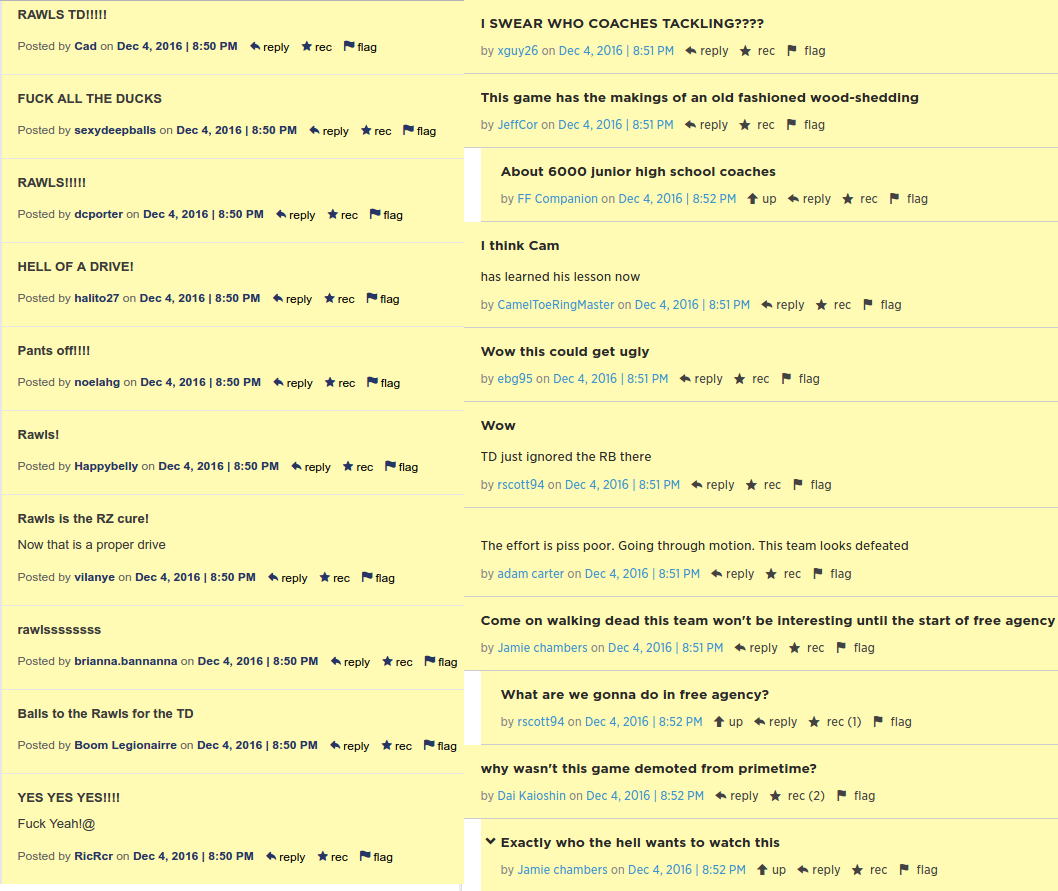 Seahawks go for it on 4th and 5, Charles Johnson sacks Wilson and injures himself on the same play (10-0 SEA) 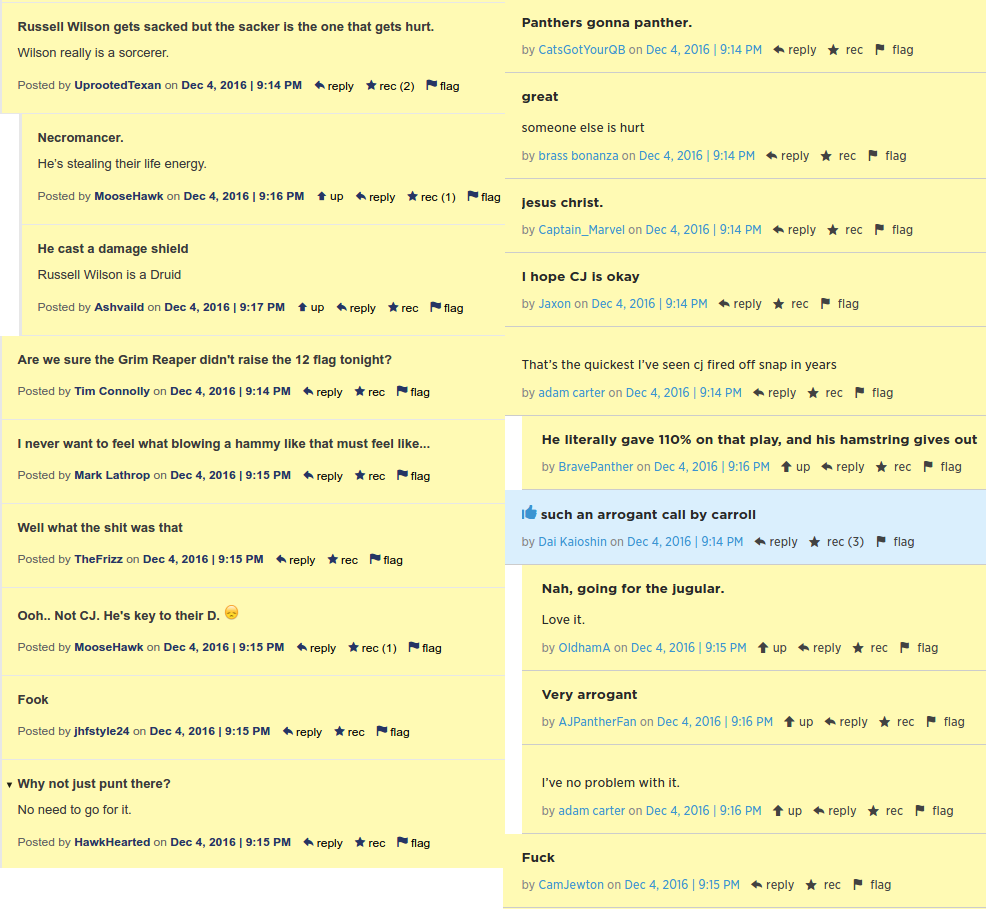 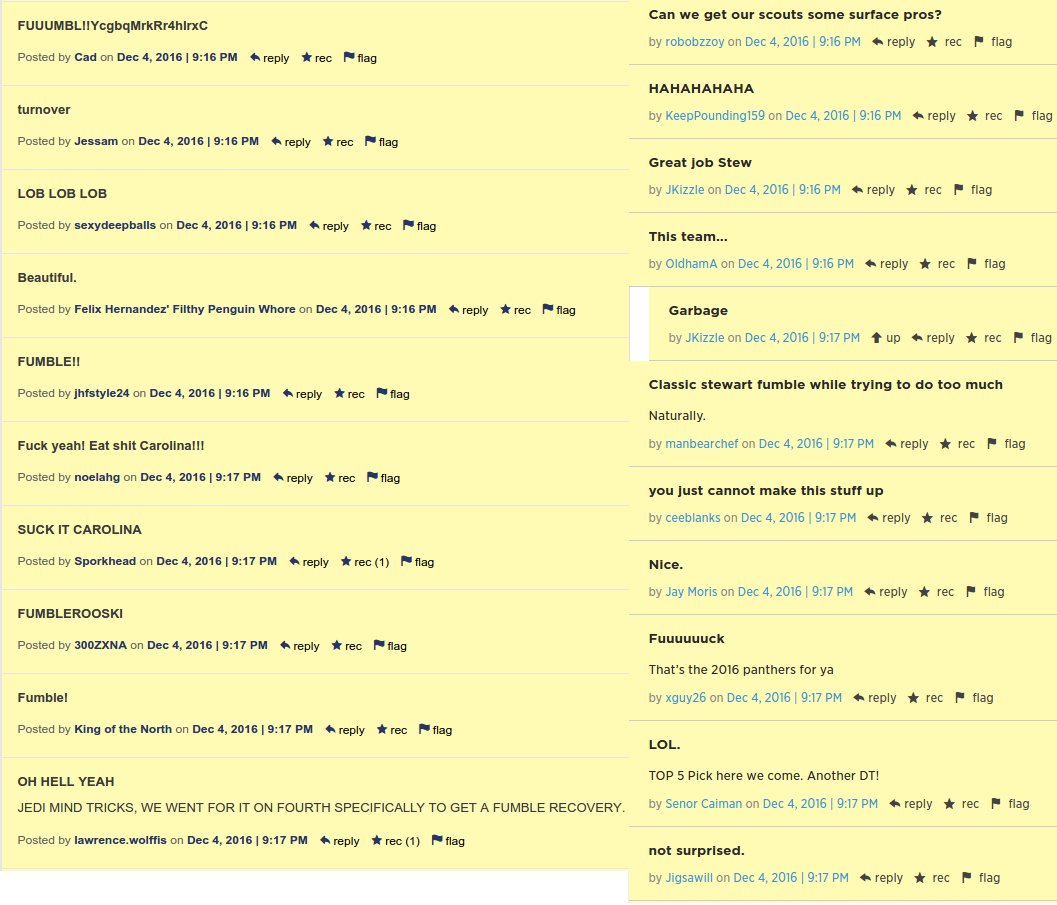 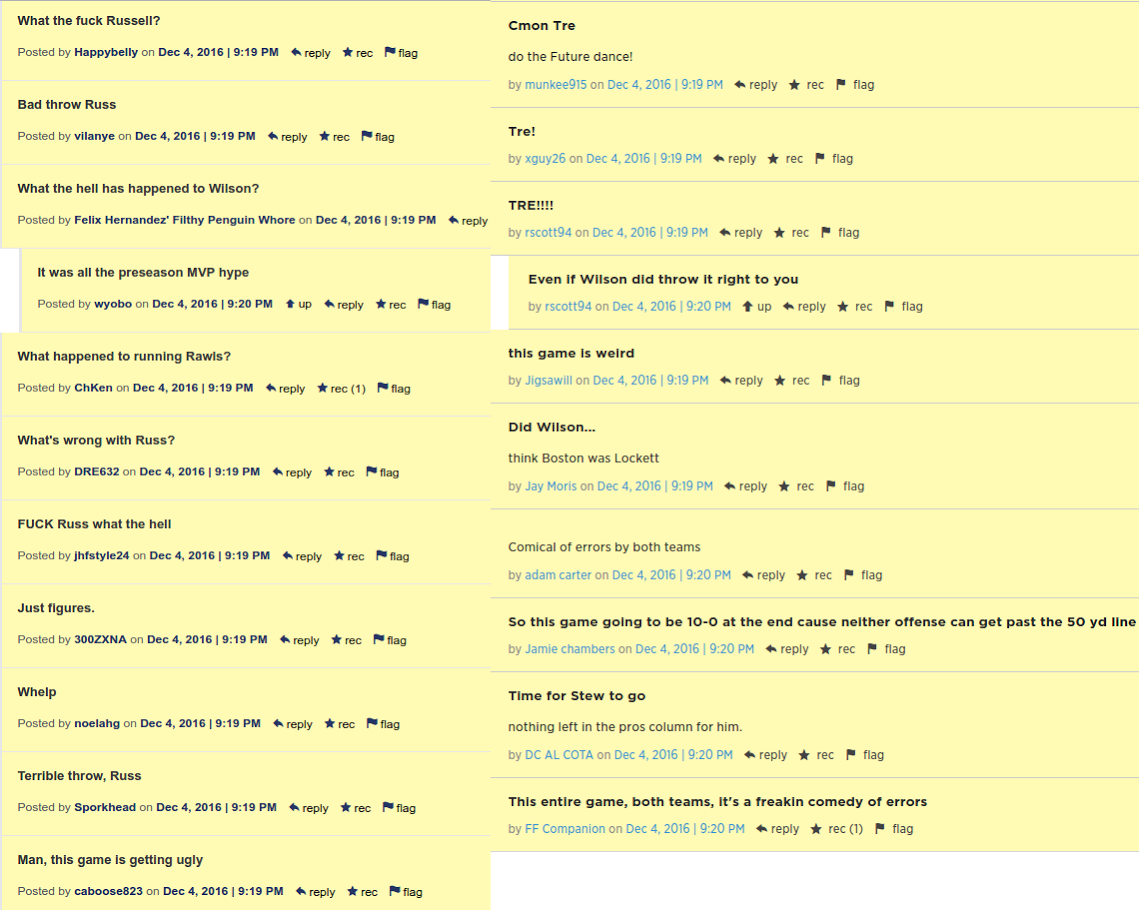 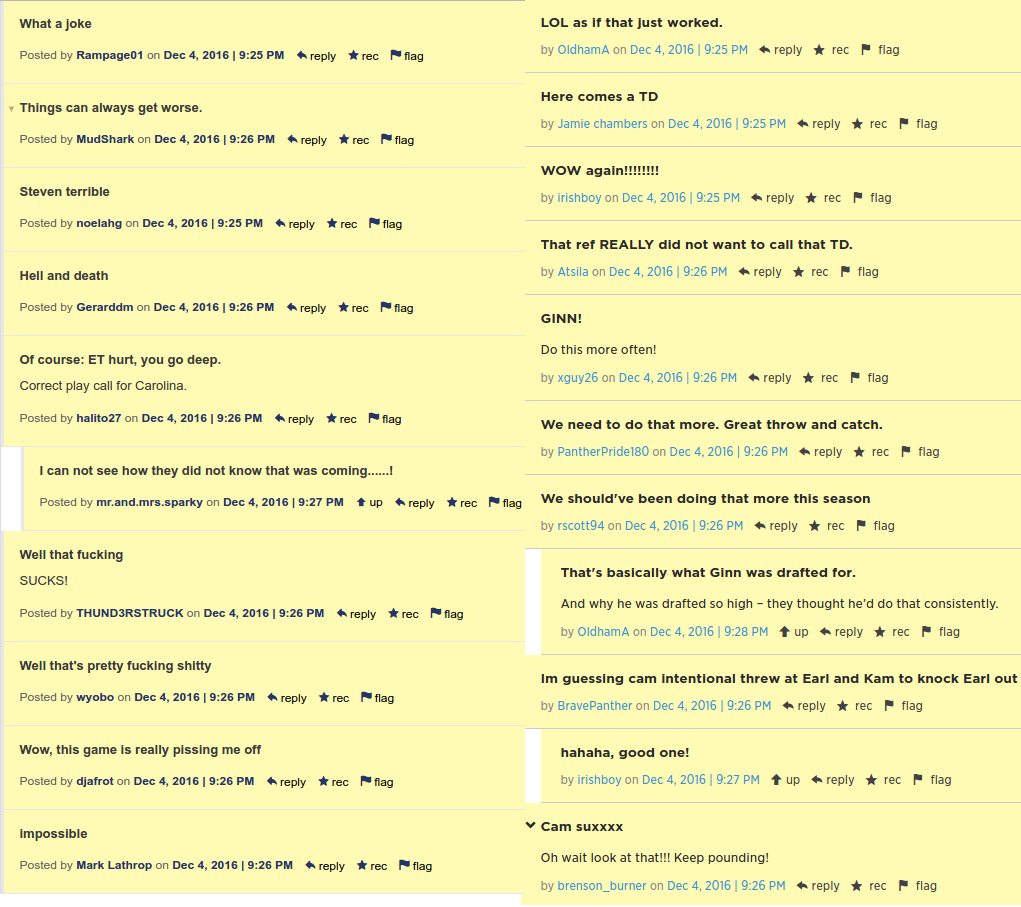 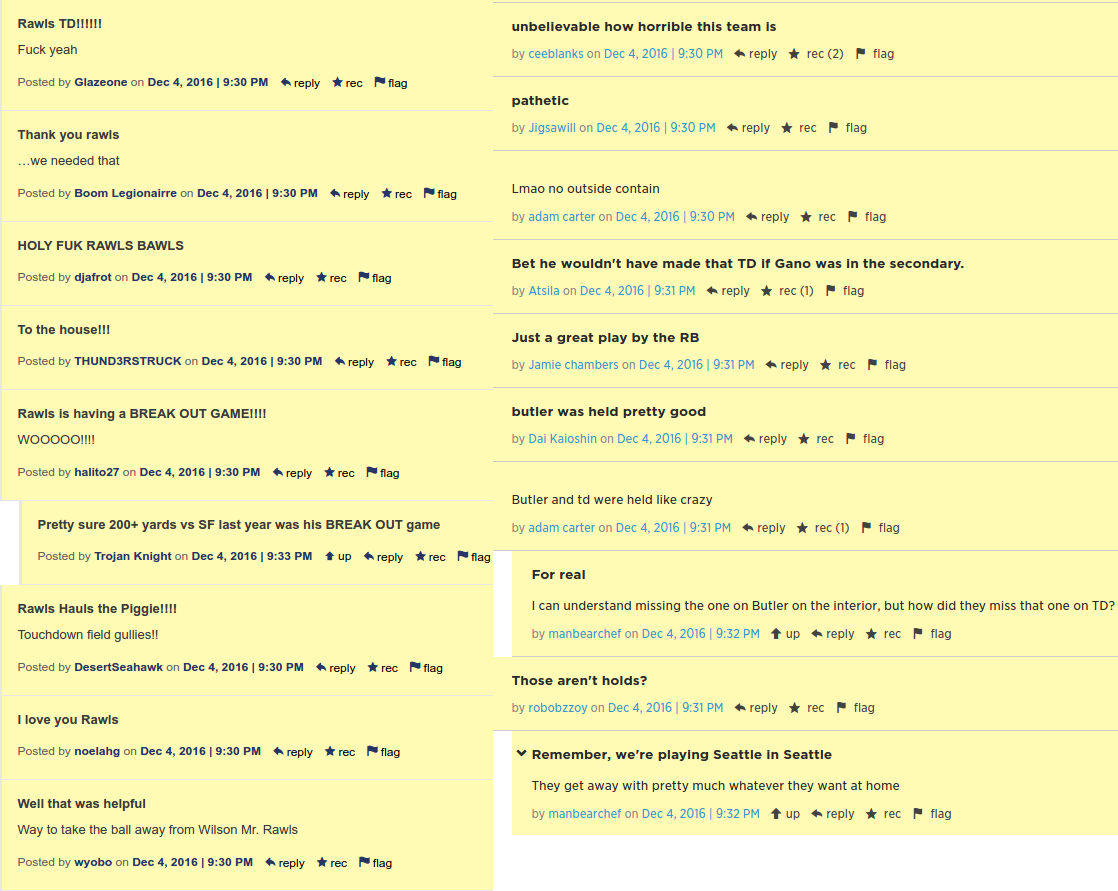 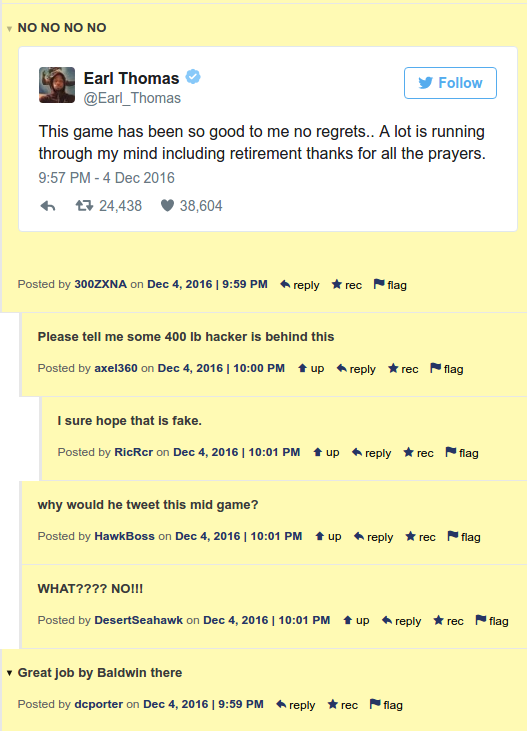 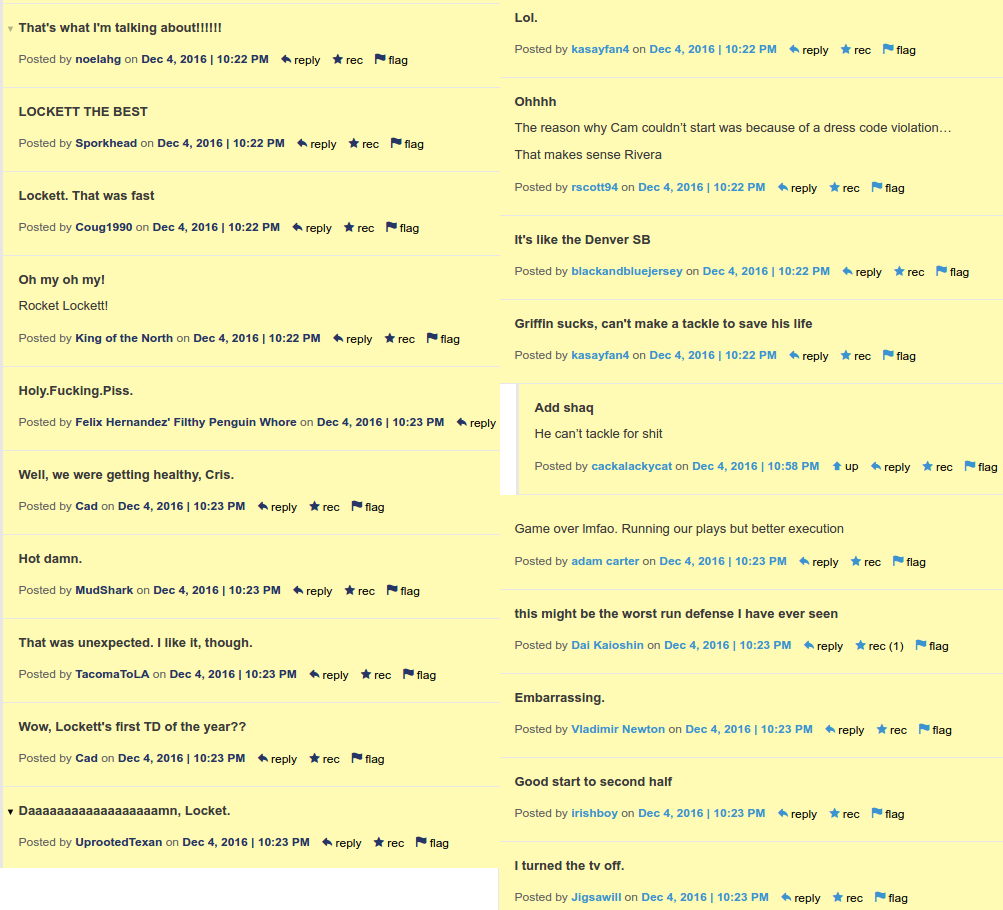 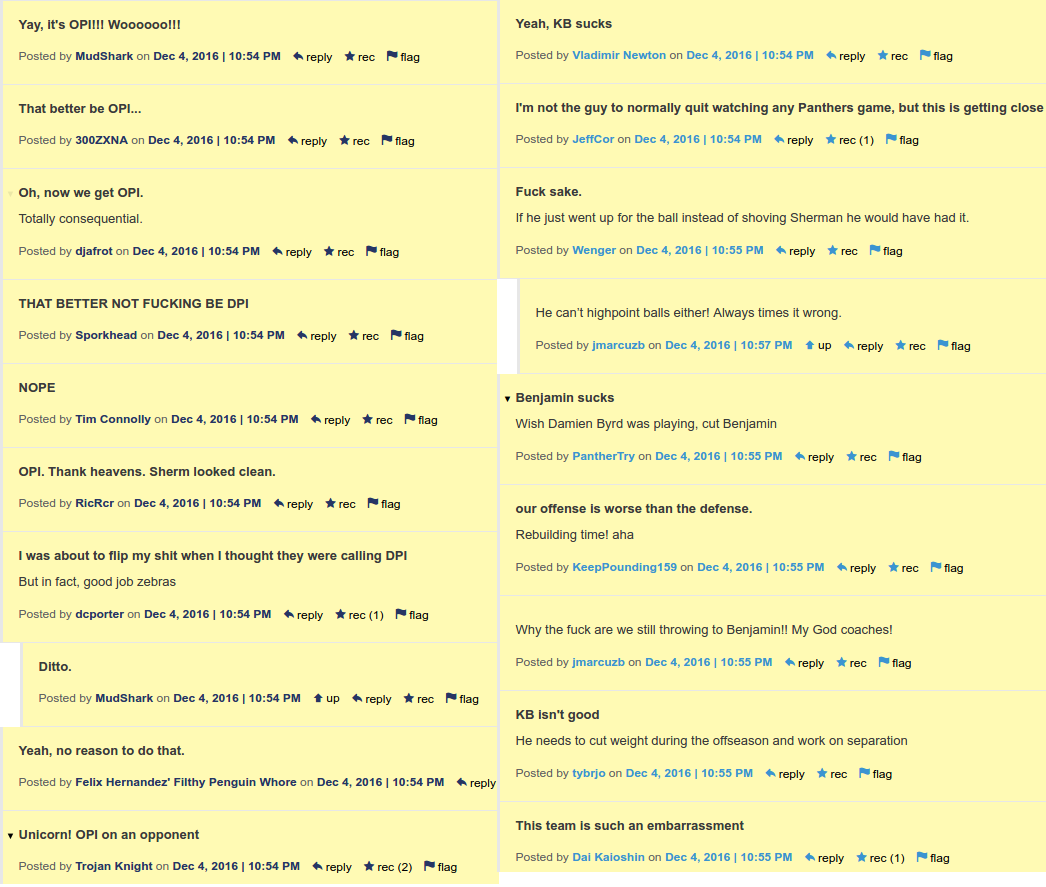 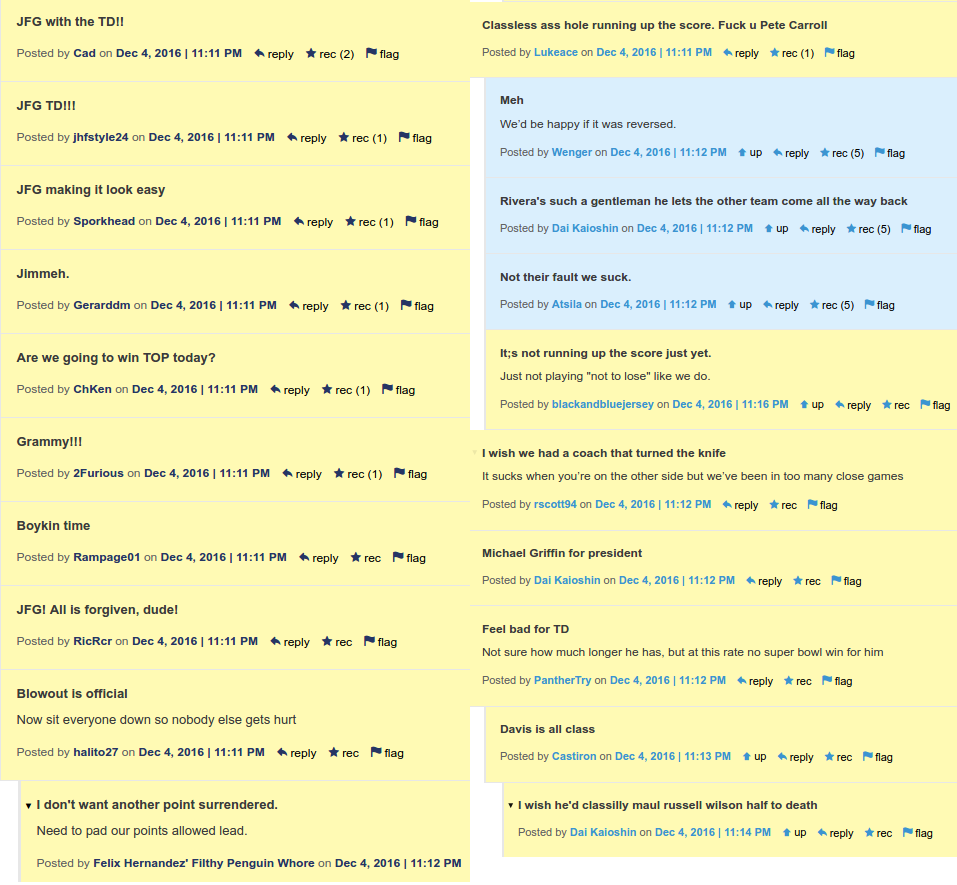 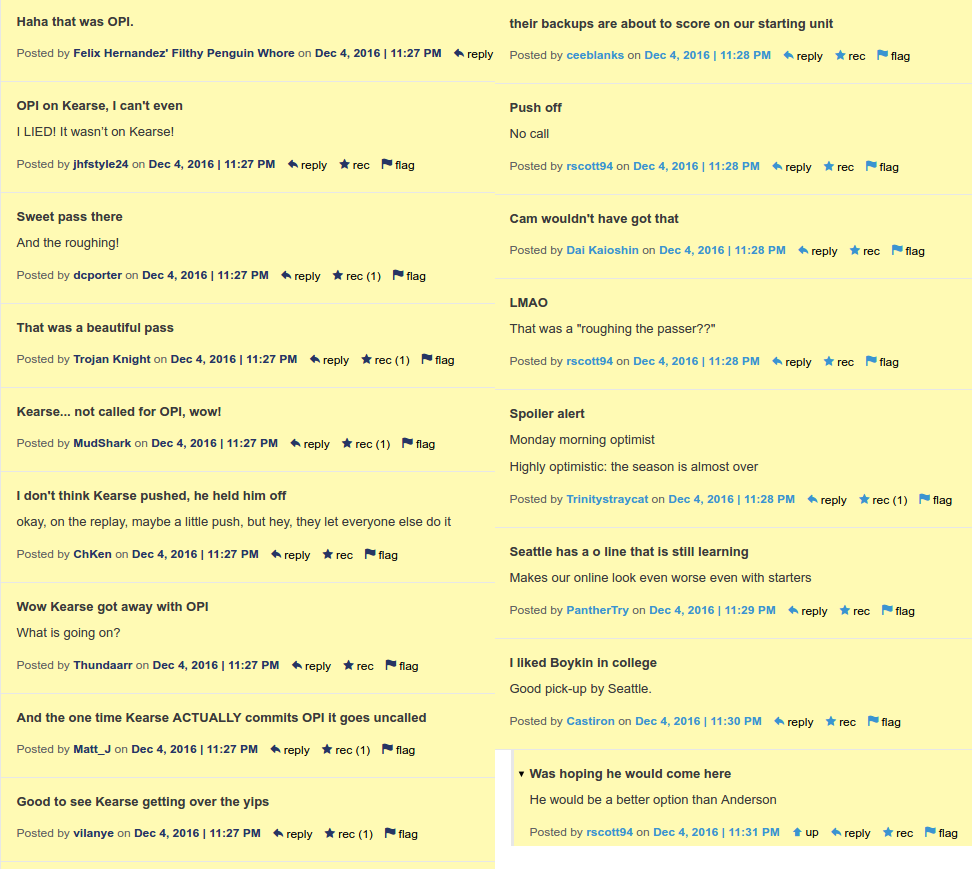 Post-Game: Newton benching a sign Rivera is losing the team?

"It reeks of a move designed to show that Rivera is still the boss of this team — the type of move that is usually a sign a team has gotten away from its coach. It would hardly be a unique circumstance considering the fall the team has had from 15-1 last season to last place in the NFC South this season.

Sitting the face of the franchise is a clear signal that no one is immune from discipline. However, this late in the season and over such a small concern, the threat instead seems hollow and more inspired by fear. The bottom line is that benching the starting quarterback for not wearing a tie is pretty lame.

While Rivera and likely the rest of the Panthers organization will stick with the story that it was simply a rules violation, I wouldn't be so quick to accept it at face value." - Matthew Stevens, Panthers Wire

D Defensive line: Kony Ealy and Charles Johnson each had a sack and Wes Horton added a half-sack, but the front four did a terrible job shedding blocks, allowing Thomas Rawls to run for 100-plus yard and two touchdowns.

D Linebackers: Like the defensive line, the Panthers' linebackers too often stayed blocked or took poor pursuit angles. Middle linebacker Luke Kuechly was animated while coaching from the sideline. Still no word on when or if Kuechly will return from the concussion protocol.

F Secondary: Safety Michael Griffin, forced to start because of Kurt Coleman's concussion, was out of position and took a bad angle on Tyler Lockett's long touchdown run. No one else in the back end played particularly well, either. Russell Wilson completed 26 of 36 for 277 yards and a touchdown.

D Special teams: Lockett had a 46-yard kickoff return and a 10-yard punt return. David Mayo entered the concussion protocol after getting drilled while covering a kickoff early in the game. He became eighth player to be placed in protocol since Week 1.

F Coaching: Rivera wanted to come out West for "two reasons - and two reasons only." The Panthers went 0-for-2 and were embarrassed by the Seahawks. Rivera tried to send a message to the rest of the team by benching Newton. This season had come unraveled. - Joseph Person, Charlotte Observer

Post-Game Video: It's just been a frustrating year (Panthersroar89) 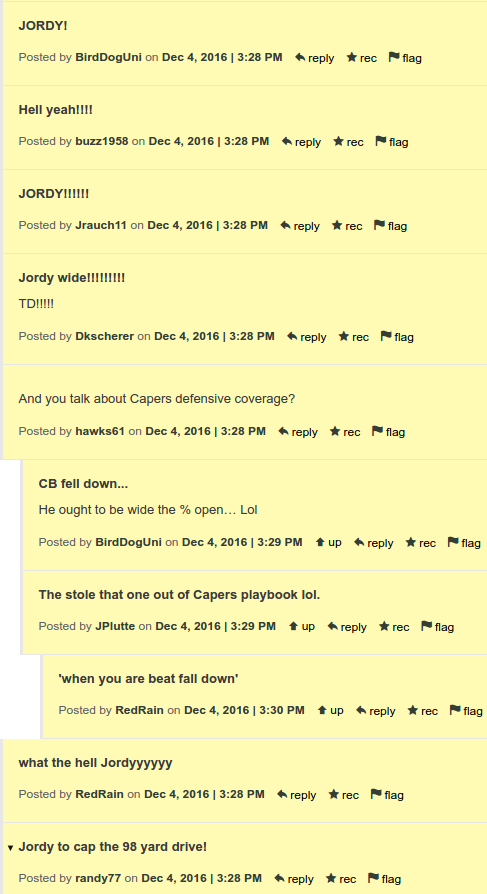 There's really no way to avoid talking about this; losing Earl Thomas sucks. It's a season-altering injury and is the biggest blow that the Seahawks defense has ever suffered in the LOB era. He's been here since game 1 of the Pete Carroll era and has developed into the best free safety in the NFL. His value to the team is immeasurable -- side note: "immeasurable" is the word that got me eliminated from my 5th Grade Spelling Bee -- and I hope he has a seamless recovery and is back on the field and kicking ass next year.

While the win came at a significant cost, it's an important win on multiple fronts in terms of the playoff picture. Arizona remains 3 games back with 4 games to play, so the NFC West can be clinched as early as this Sunday (Arizona L at Miami and Seattle win at Green Bay). They also remain as the #2 seed ahead of the surging Detroit Lions, and have a small chance of catching Dallas for the #1 seed, but they'd have to lose 3 games and Seattle has to win out for this to happen.

The Packers are next for the Seahawks, and it is expected to be a snow game at Lambeau Field. Green Bay is fighting for their playoff lives, and a win would take them back above .500. It'll be a big ask of Steven Terrell to deal with defending against a team quarterbacked by Aaron Rodgers, but you know who could help him out? Kam Chancellor. Richard Sherman. DeShawn Shead. Michael Bennett. Cliff Avril. Frank Clark. Bobby Wagner. KJ Wright. Ahtyba Rubin. Jarran Reed. Jeremy Lane. Mike Morgan. Cassius Marsh. Yeah, the Seahawks may not have Earl Thomas for the rest of the year, but they do have all of THOSE guys on the field. There's also an offense that now features a healthy Russell Wilson, a healthy Thomas Rawls, and a re-emergence of Tyler Lockett to accompany Doug Baldwin and Jimmy Graham.