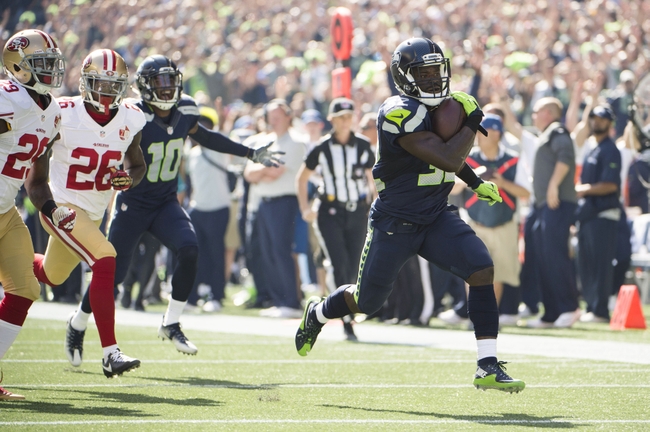 The Seahawks broke out of their offensive slump by wrecking the San Francisco 49ers with relative ease. The only scare was Russell Wilson's 3rd quarter knee injury, but thankfully Wilson avoided the worst case scenario of having something serious enough to put him out for an extended period of time. Even when Wilson went out, Trevone Boykin came in and played pitch and catch with Doug Baldwin and got his first ever NFL touchdown pass.

It's time to bust out yet another Enemy Reaction for the 49ers. I've lost count of the number of times I've featured them, including in games where they didn't even play against the Seahawks. You know you want to see how Niners Nation responded to their team's latest blowout loss to the Seahawks. I've even provided a couple of standalone game thread screenshots for your viewing pleasure. 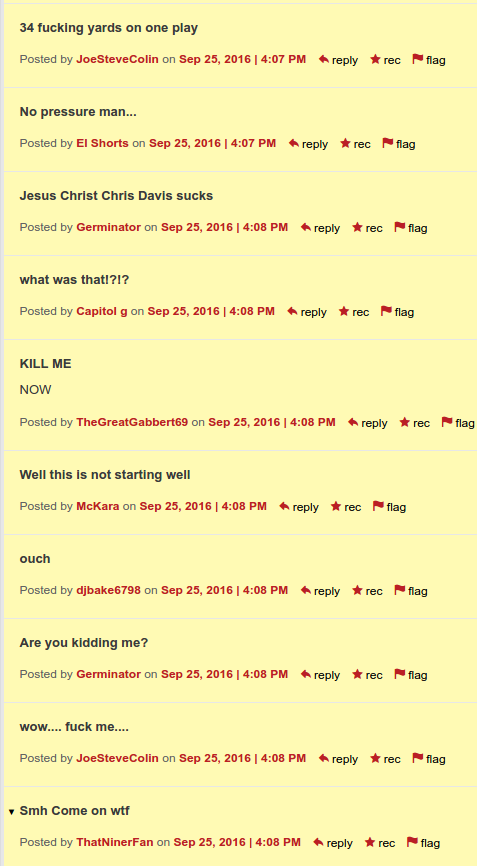 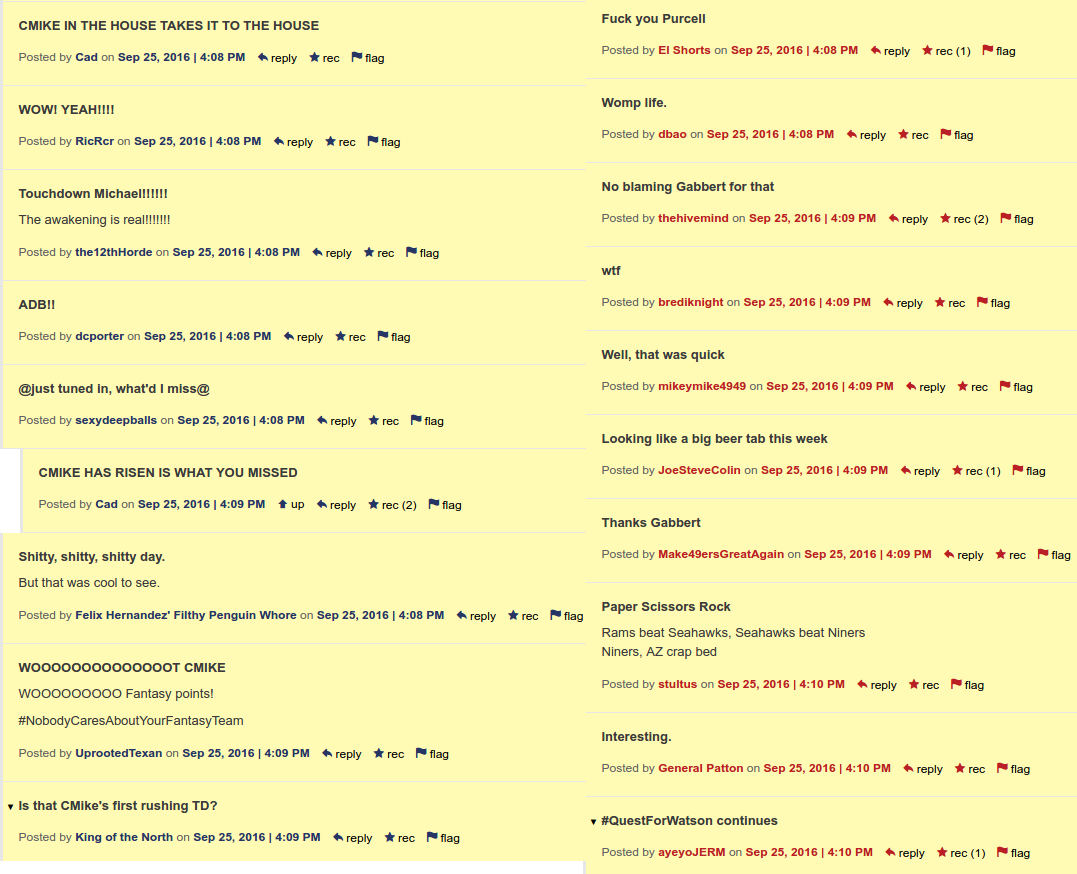 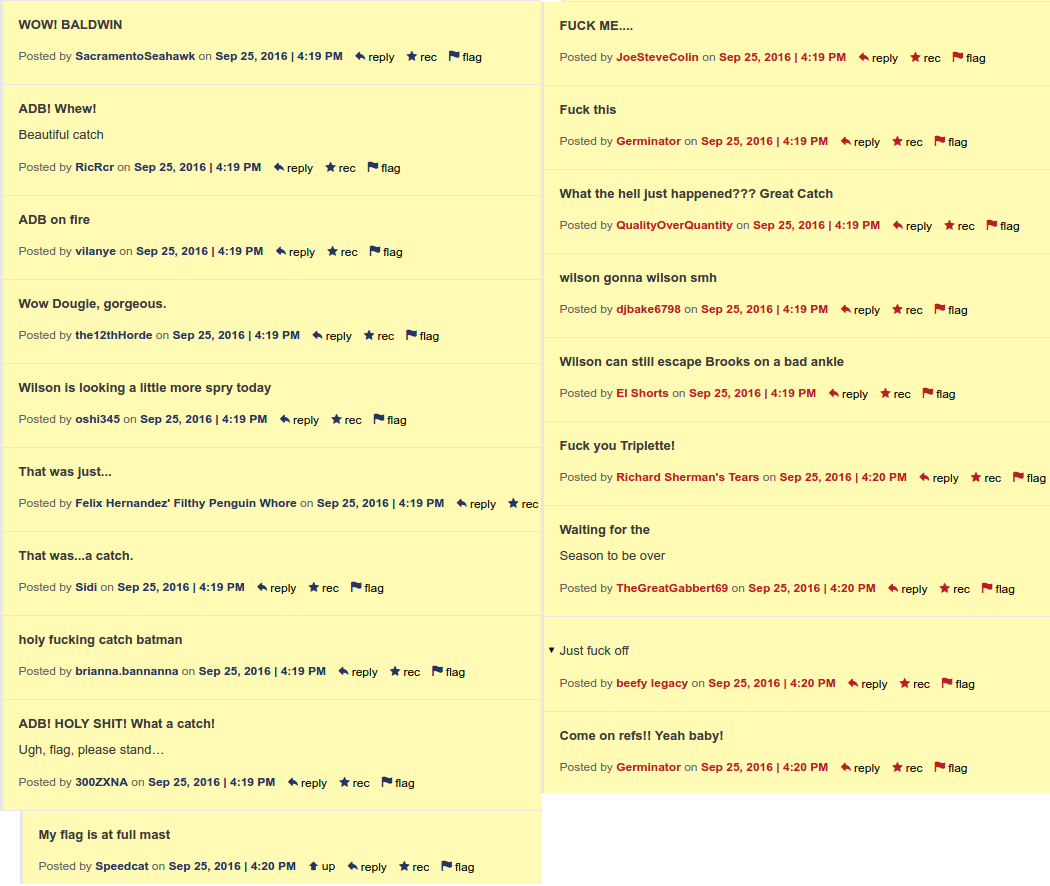 Christine Michael plunges in for another touchdown (14-0 SEA) 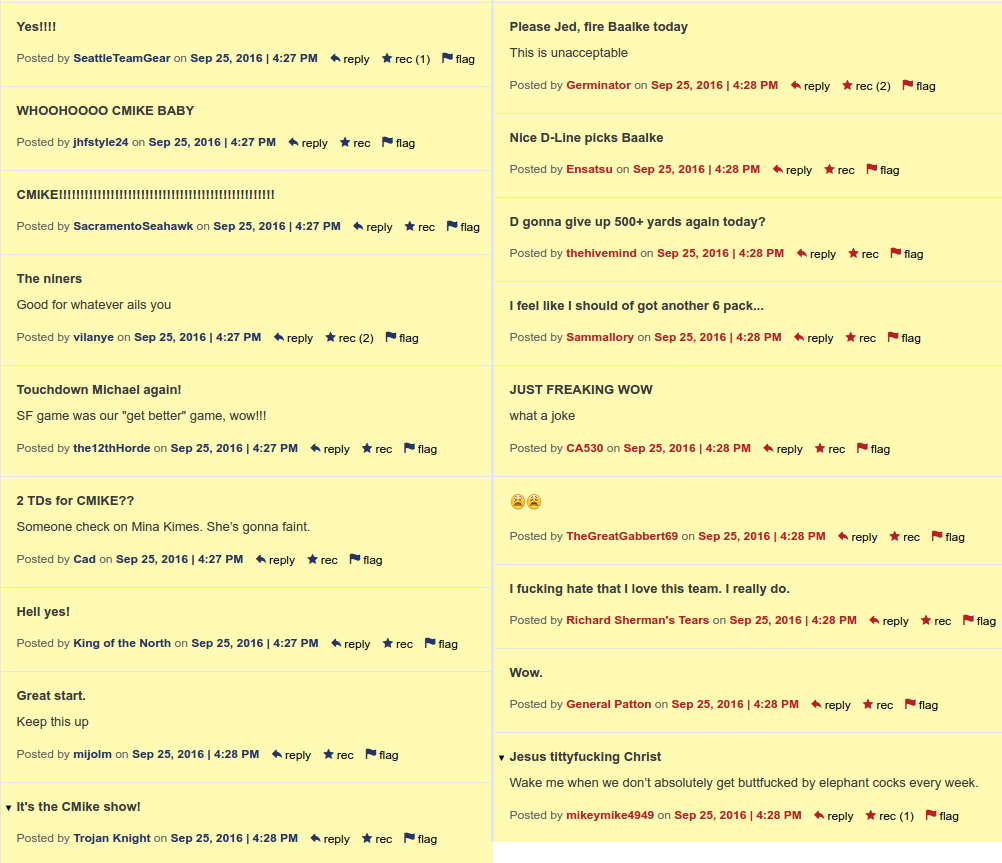 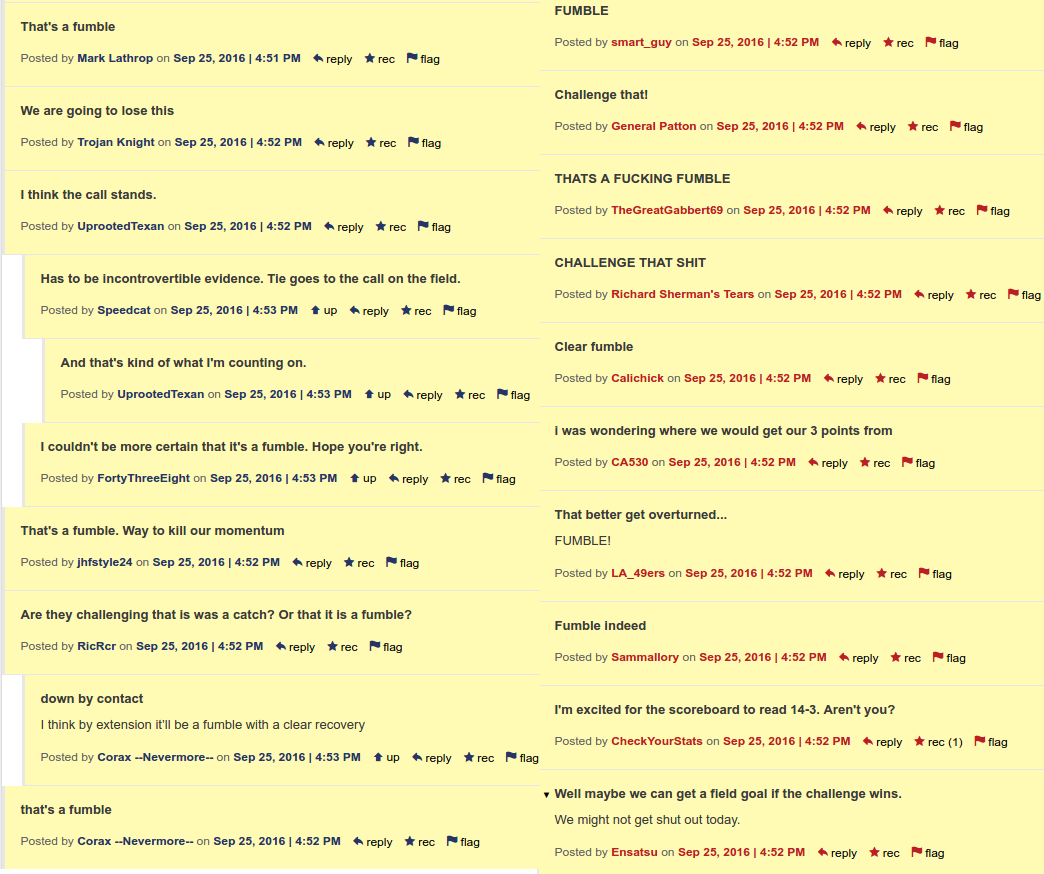 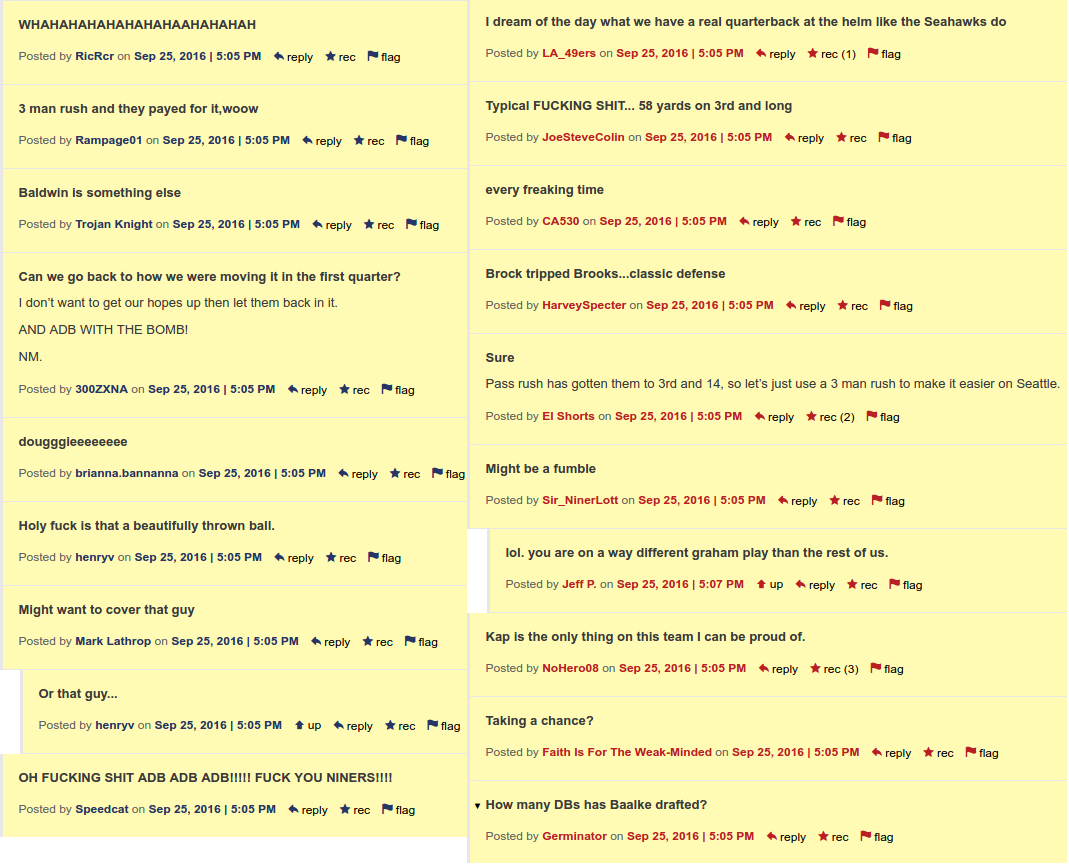 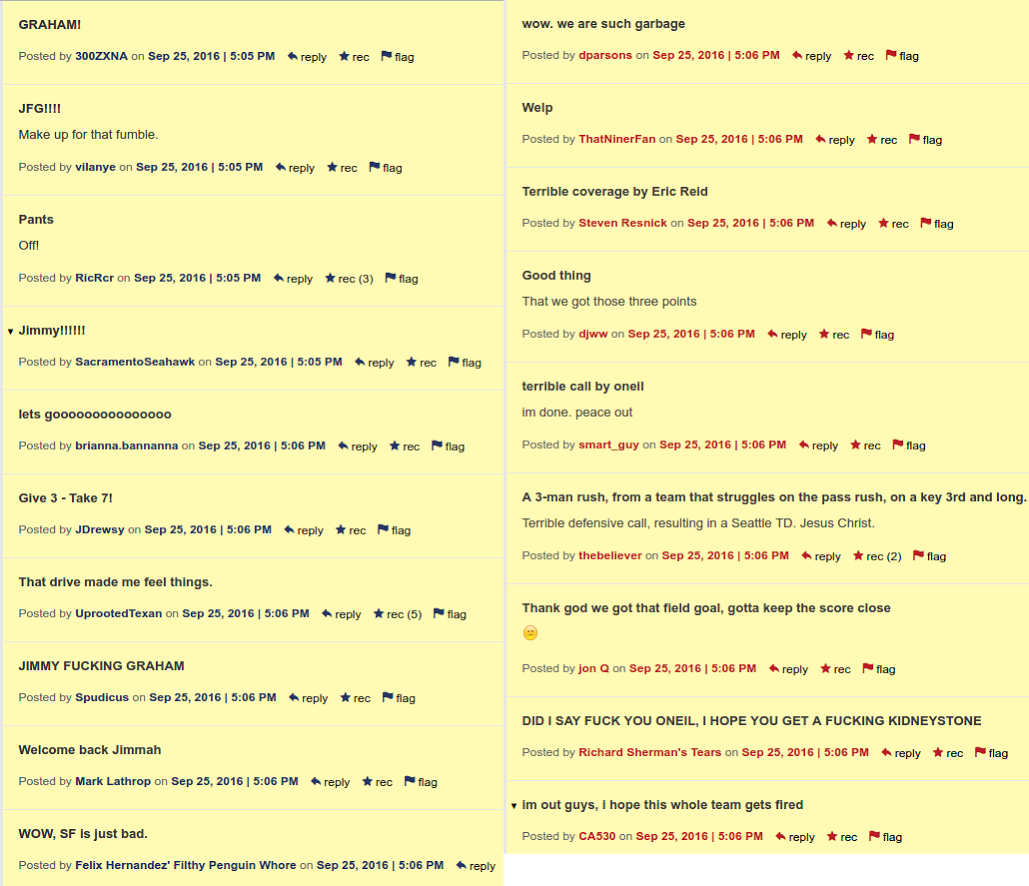 Russell Wilson heaves it up on a free play, Jimmy Graham somehow comes down with it, Seahawks go up 24-3 on Hauschka FG 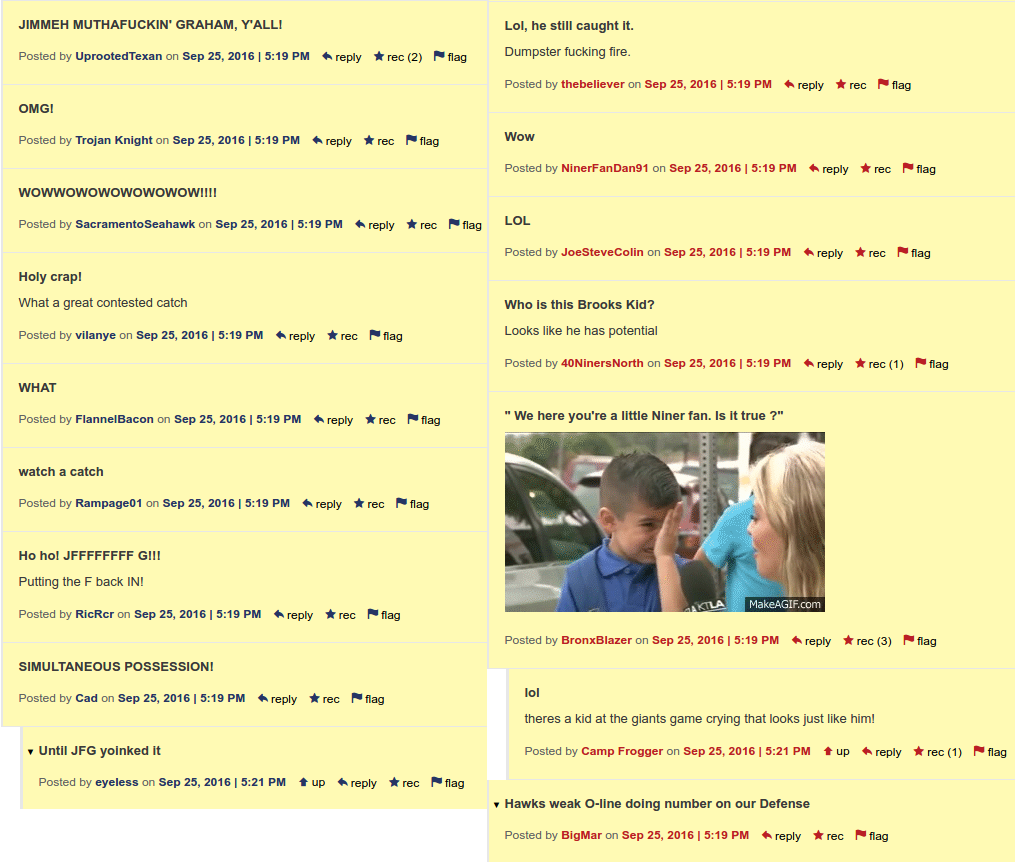 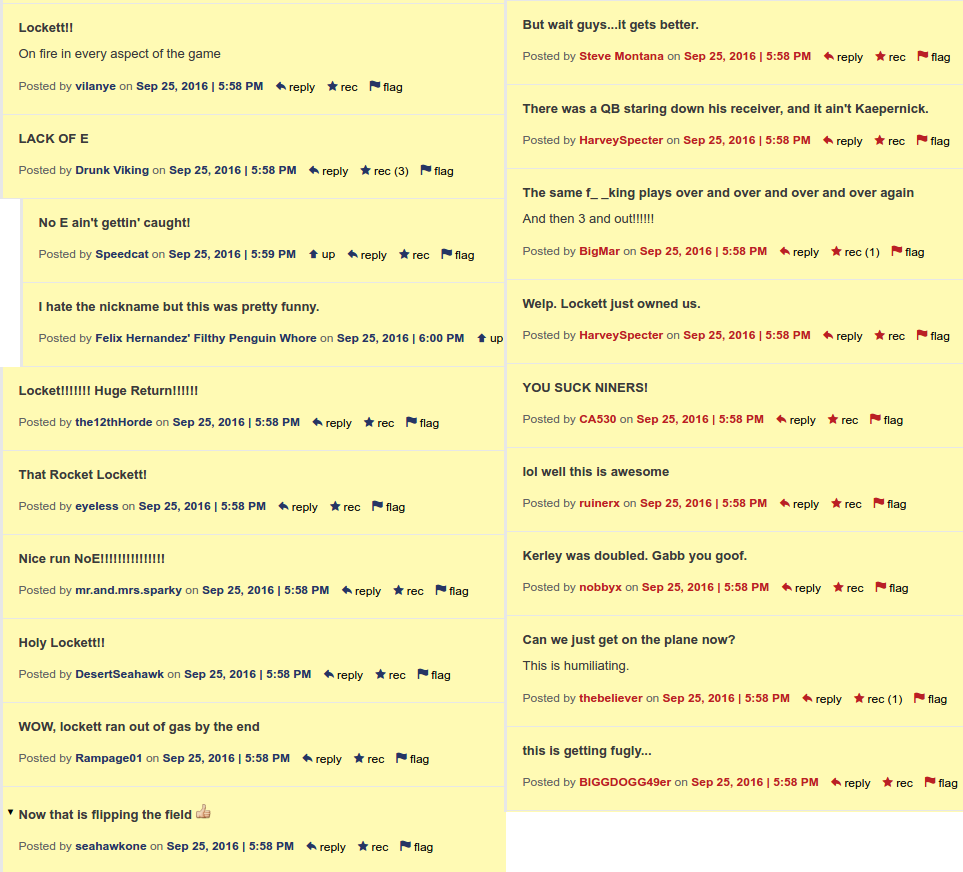 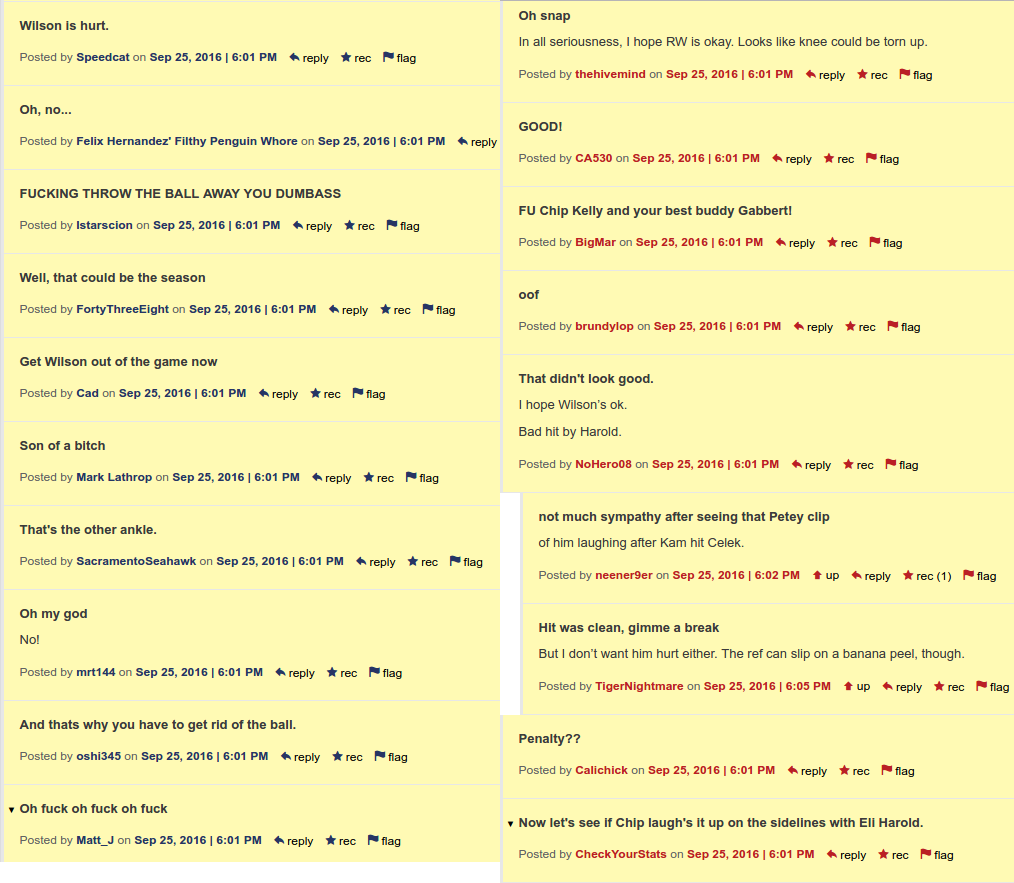 Niners Nation is upset with the horsecollar penalty 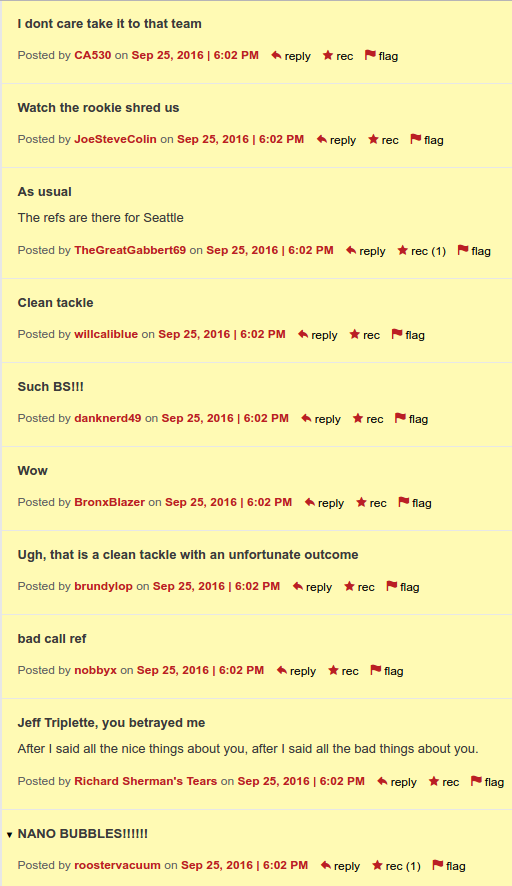 Bobby Wagner picks off Blaine Gabbert, Seattle kicks a FG to make it 30-3 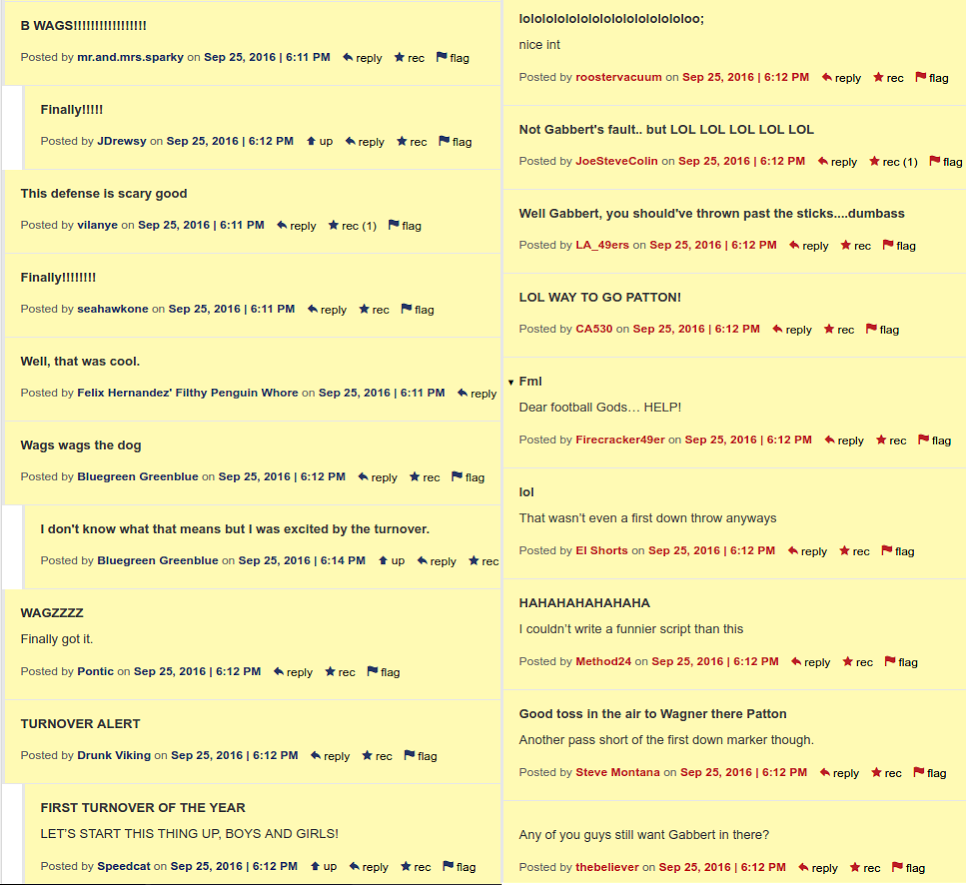 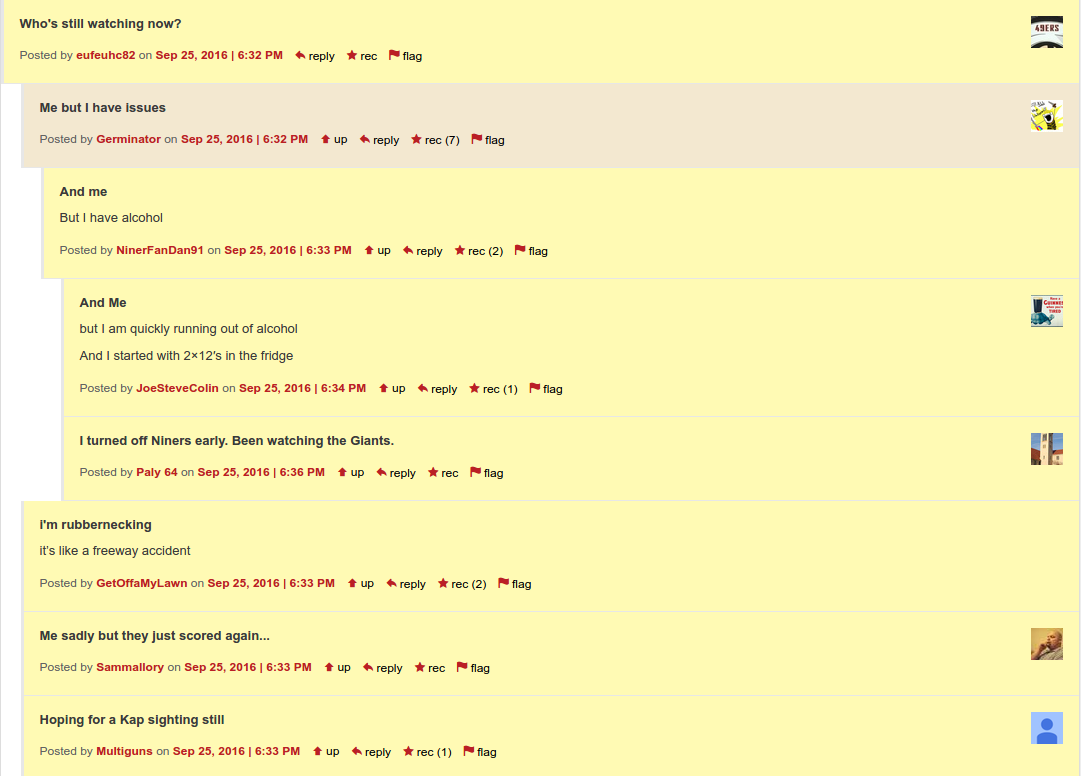 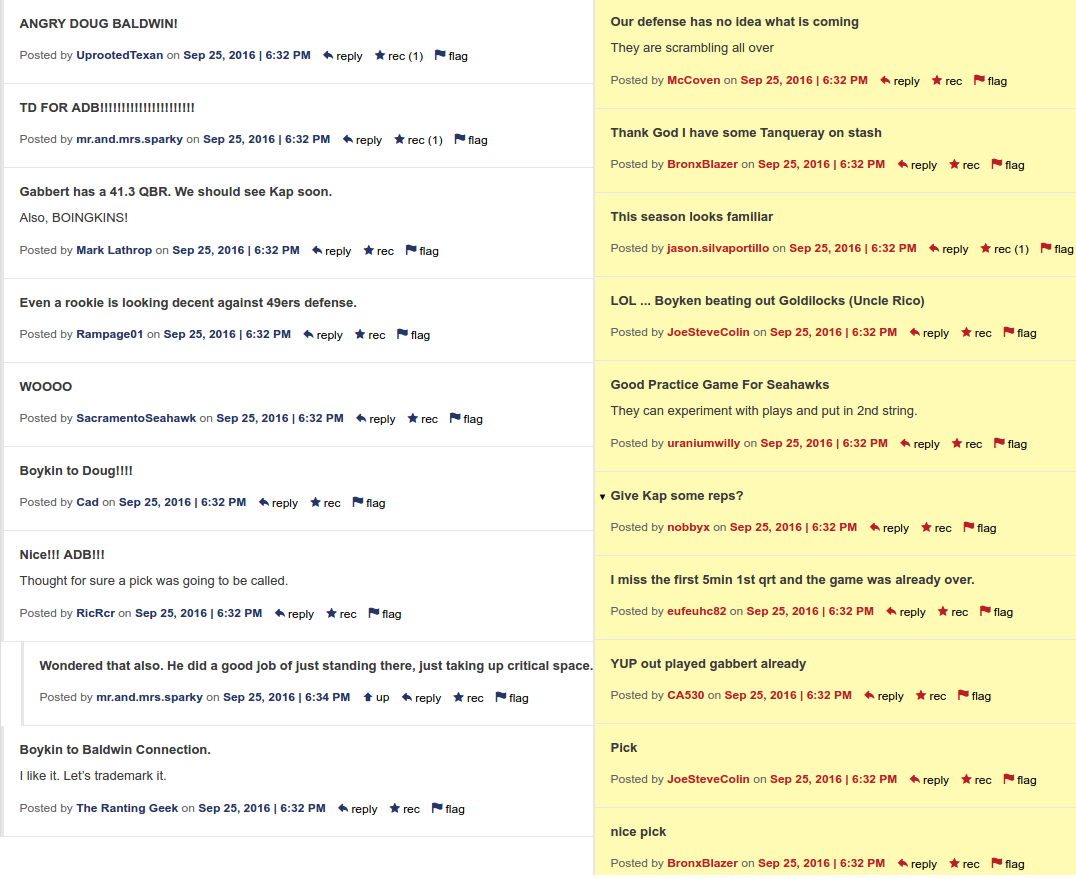 ...When complaints of an illegal pick play get shut down 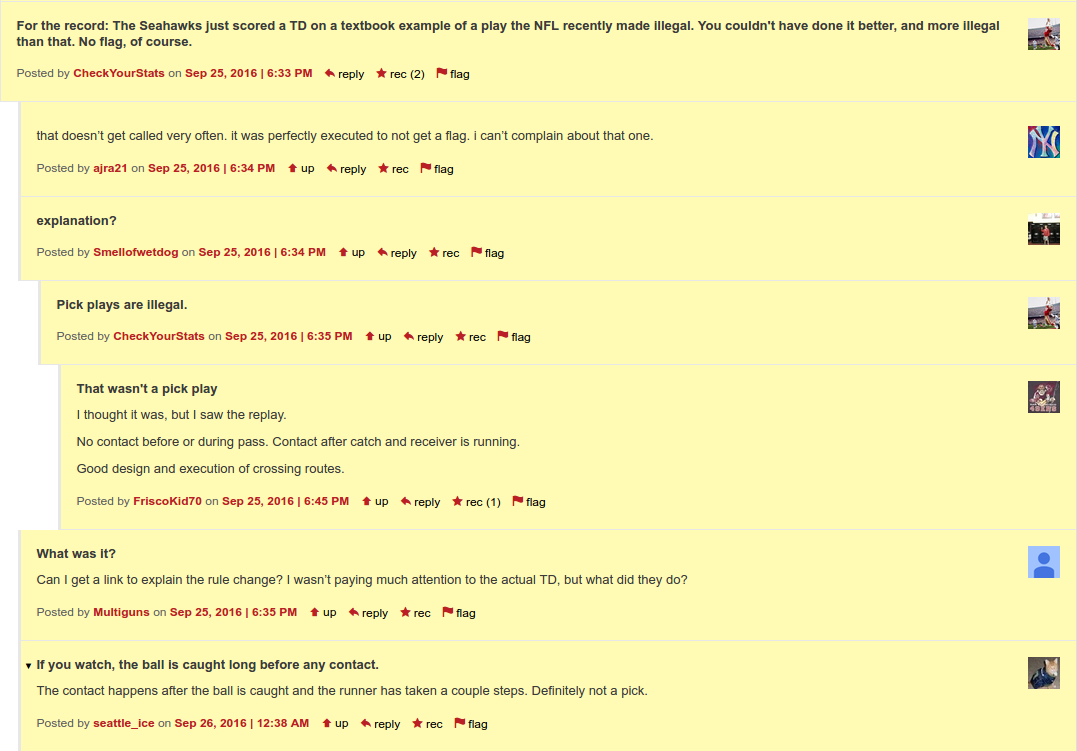 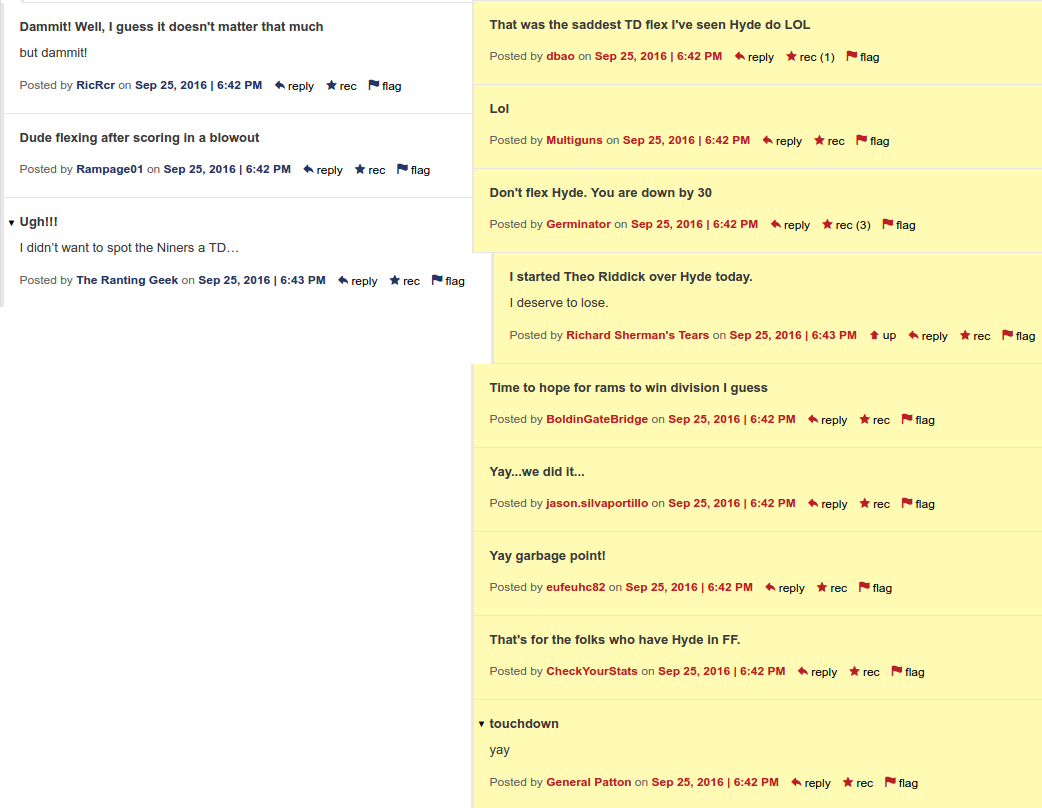 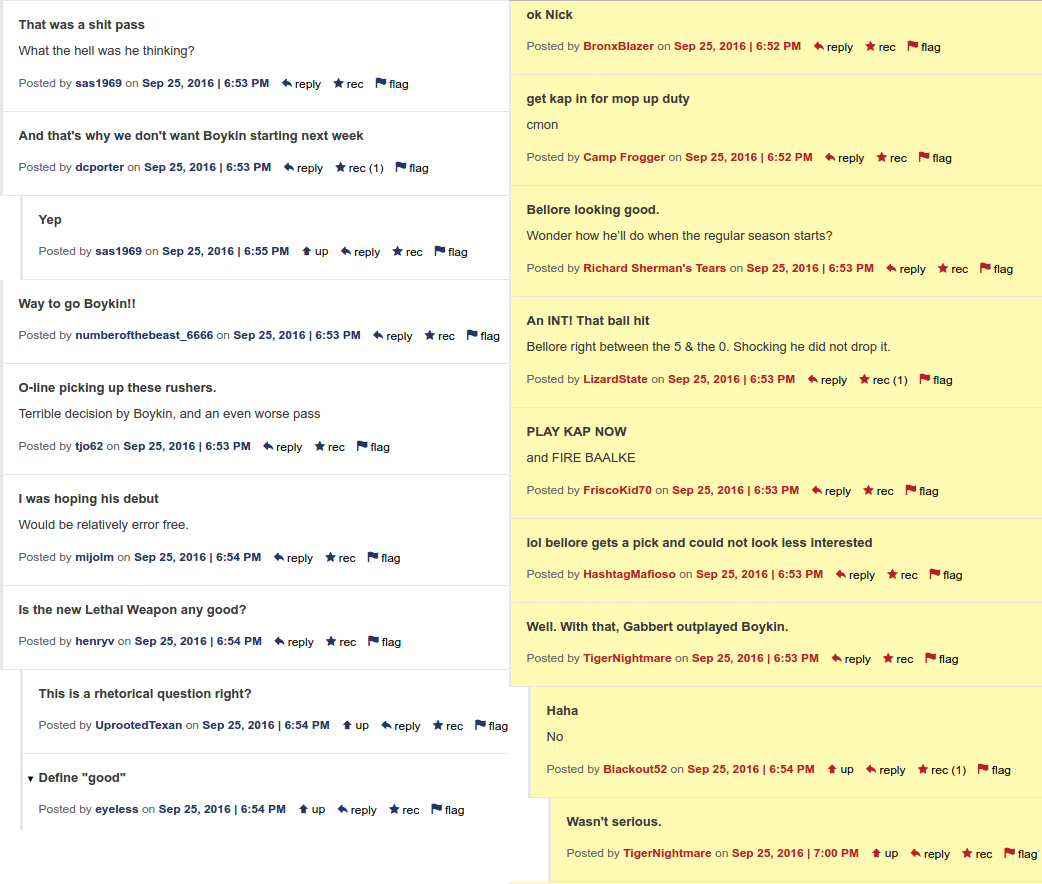 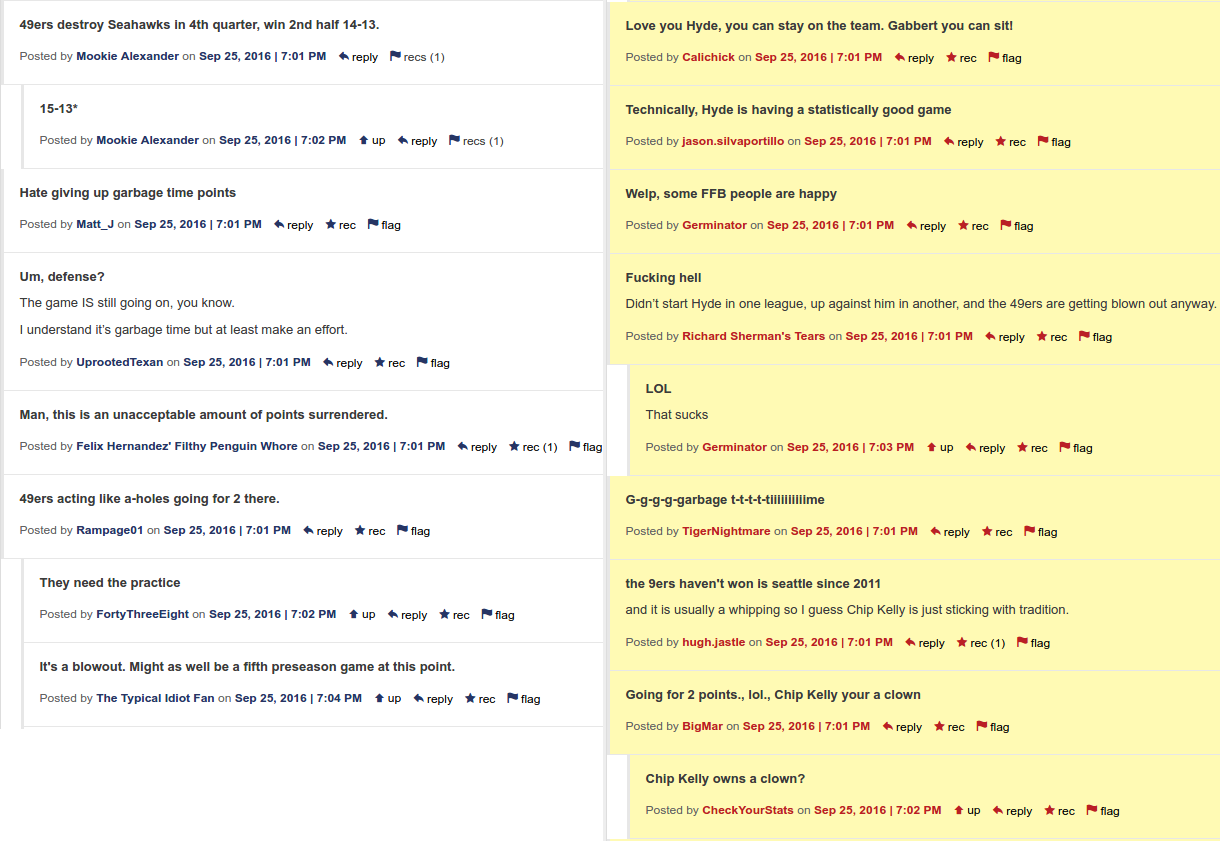 ....About that guy with the 49ers hat but holding a kid with a Russell Wilson jersey 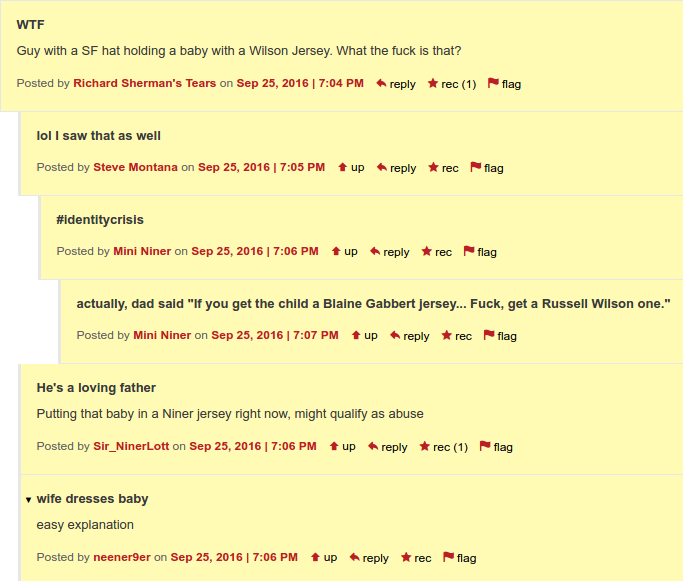 The Seahawks hadn't scored a touchdown in their first two games of the season, but it only took three plays and 43 seconds to remedy that ailment against the inept 49ers Sunday in Seattle. They added three more, tossed in three FGs for good measure, then let the Niners run out the clock in the fourth quarter with a ground game that had done squadooshky through the first three quarters.

Somewhere out there lounging on a patio recliner, former HC Jim Tomsula is smiling and counting the four million dollars per year Jed York is paying him for his early retirement. He'll be collecting for two more years, no doubt soon to be joined by current HC Chip Kelly, who'll be collecting six million per for his own failed efforts.

Meanwhile, somewhere in Ohio, Mamma and Poppa York are squirming and wondering how much money their son Jed is going to throw down the toilet while masquerading as a legitimate NFL owner.

The 2016 season is mirroring the 2015 season with eerie accuracy. Big win at home to start the year, followed by two severe tramplings on the road. - Skeebers, 49erOutsider

COACHES: F-. Jim O'Neil is an awful defensive coordinator - even worse than Eric Mangini - but Chip Kelly was the Niners' kryptonite in this game. His plan was to throw short of the sticks on third down and hope his receiver could pick up the first down after the catch. He said so after the game.

This plan was moronic. Why? Because Kelly's starting quarterback is physically incapable of throwing a pass that leads a receiver to run after the catch. Kelly should have known this - everyone else does. The Niners' offense actually might have been successful if Kelly had called third-down plays in which the primary receiver ran to the sticks or past them. Instead, the offense converted just 4-of-15 third downs, and at one point had converted 0-of-10.

Can someone point out one area in which the Niners have improved from last season? To me, they have gotten worse on offense, defense and special teams. - Grant Cohn, Press Democrat

Post-Game Video Crow: "I don't get all this dinking and dunking bullsh*t" (BigThizzle75) 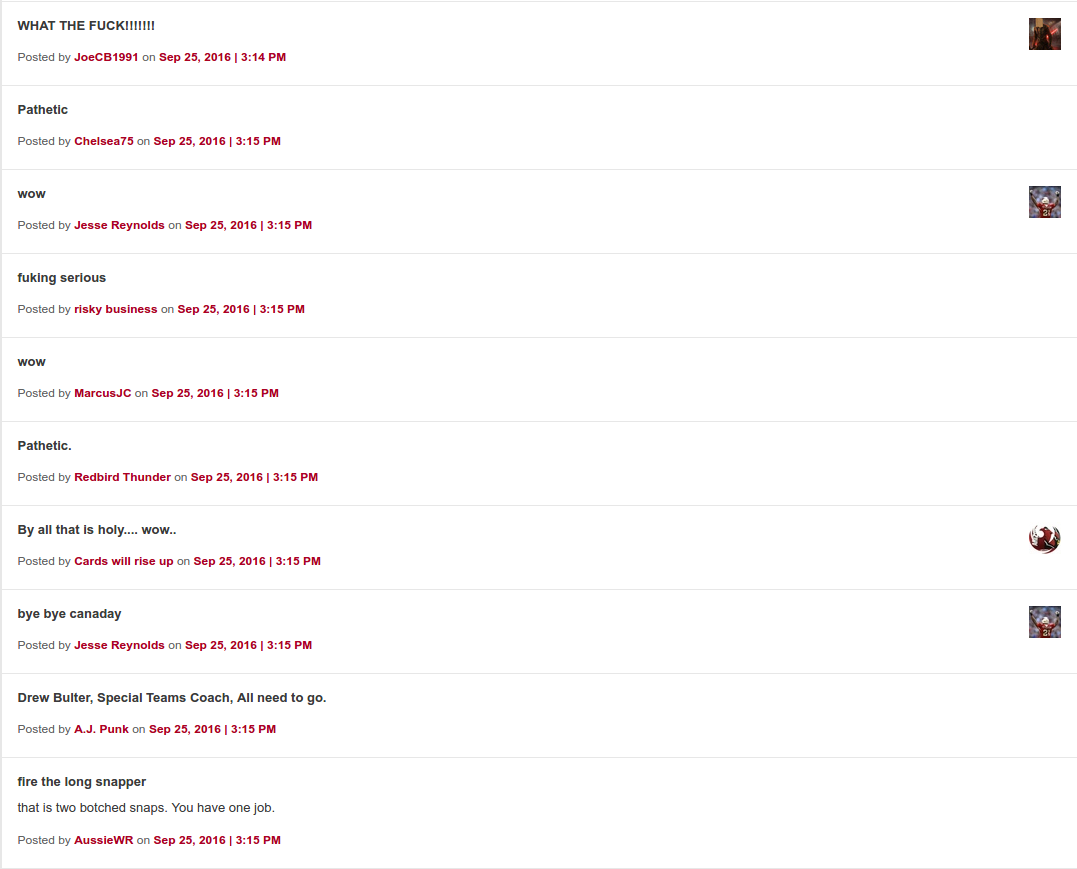 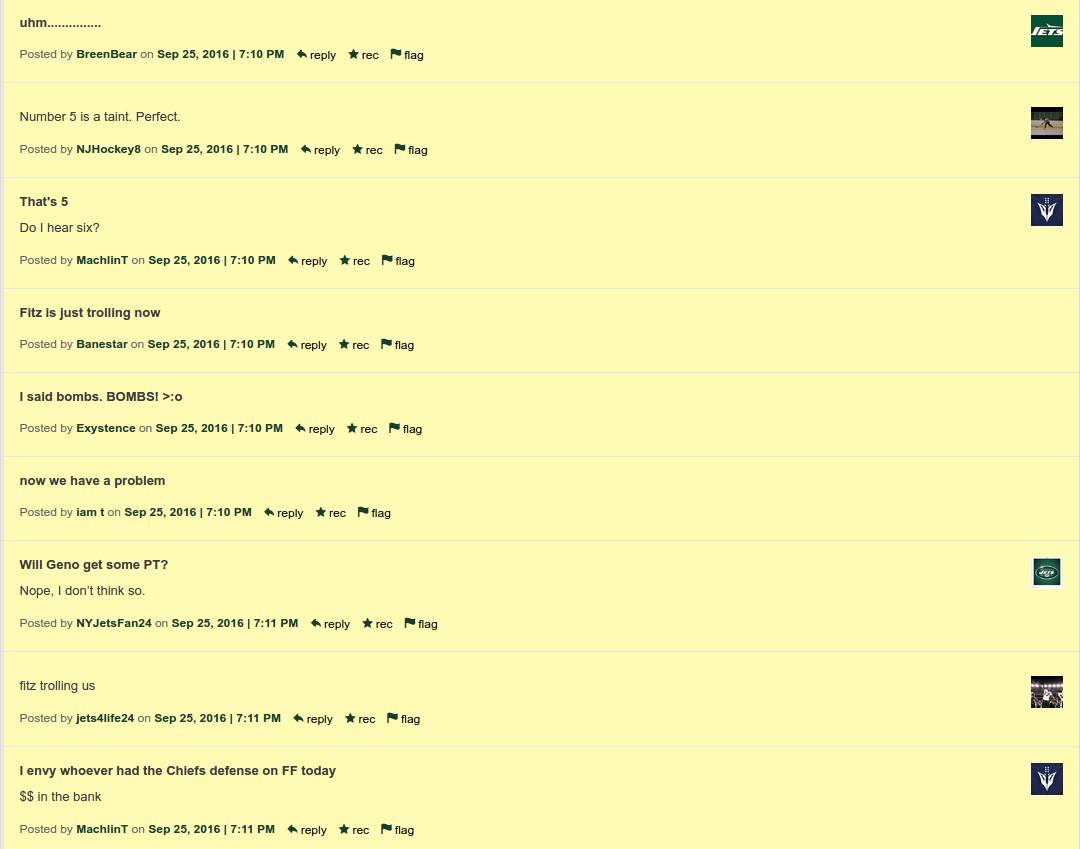 Next up, the New York Jets. It's the first time the Seahawks will travel to Metlife Stadium since they won the Super Bowl there on February 2nd, 2014. In fact, Seattle is 3-0 lifetime at Metlife, including the two 10 AM PT kickoffs against the Giants in 2011 and 2013. The Jets are 1-2, and Ryan Fitzpatrick had one of the worst games any NFL QB has ever played. New York's defense only allowed 10 points to the Chiefs, with the other 14 coming via fumble return and a pick 6. The Jets defense has been up-and-down to start the season, mostly in the secondary and specifically Darrelle Revis, but their front four will provide a stiff challenge for this Seahawks offensive line. Hopefully Seattle can rise to the occasion, get to 3-1, and get healthy during the much-needed early bye week.

October awaits us! Thanks for reading and Go 'Hawks!