You may not have heard but the Seattle Seahawks are, for the fifth consecutive season, playing in the Divisional Round of the NFL playoffs. That's pretty good. Oddly enough, they're also playing an opponent from the NFC South in the Divisional Round for the fifth consecutive year. This time, they play the Atlanta Falcons and, like their first meeting back in 2012, Saturday's game will be played in the Georgia Dome.

The Atlanta Falcons are a very good football team this year and boast the most efficient offense in the NFL. Their quarterback, Matt Ryan, finished first in the NFL by a large margin in both raw value and efficiency; he also finished tops in QBR. They have an all-world receiver in Julio Jones, who finished second in total yardage, first in raw value and second in efficiency. He also went and had himself a 300 yard receiving game, in case you forgot. He's good. They have a fearsome running back tandem in Devonta Freeman and Tevin Coleman who can make plays both in the passing game and running game. This is a stacked offensive attack that is very hard to predict. The Seahawks' defense will have their hands full stopping this onslaught, especially missing their All-Pro free safety, Earl Thomas.

But a little-known but big threat this Seahawks defense faces is from their two tight ends: Austin Hooper and Levine Toilolo.

We already know about the damage that Levine Toilolo has wrought upon the Seahawks this season. But who the heck is Austin Hooper?

Well, Hooper is a rookie TE from Stanford, selected in the 3rd round in last year's draft. He's a pretty big dude at 6036 and 248 lbs. He's a slightly above-average athlete at tight end, comparable in pSPARQ athleticism to former Seahawk dreamboat Cooper Helfet.

When you look at his 2016 stats, they don't really jump off the page at you: 27 targets, 19 catches, 271 yards and 3 touchdowns. Kinda boring, right? But he's been very valuable and incredibly efficient, boasting an 11th best DYAR among tight ends and a DVOA that is a relatively close 2nd behind only Rob Gronkowski's collapsed lung. There just might be something to this kid from Stanford.

The Seahawks aren't all that good at defending tight ends: they rank a paltry 19th in DVOA allowed to the position. So how does Atlanta like to attack defenses with their tight ends in general and Hooper specifically? Also, how might the Seahawks defend a guy like Hooper? Let's look briefly at some film. 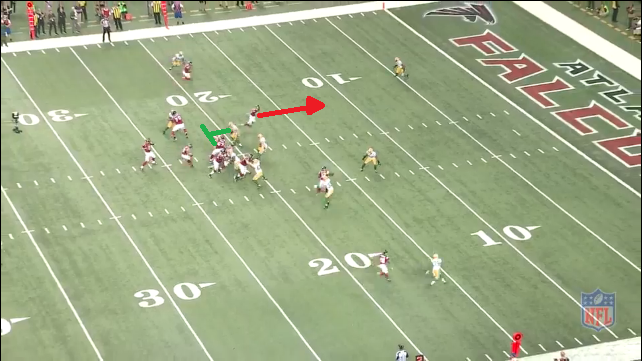 One of Hooper's best games this season was Atlanta's come-from-behind win against the Packers in Week 8. This was a 2nd and 5 play just after the two minute warning with the Falcons trailing 21-13. Hooper is lined up in-line next to the left tackle, with Matt Ryan in the shotgun. Ryan and RB Terron Ward execute the play action which Hooper helps sell by appearing to go out to block LB Blake Martinez. Martinez comes up to defend the run but Hooper disengages and actually runs a route behind him in open space, which Matt Ryan sees easily for a red zone gain of 17 yards. Atlanta would score two plays later. 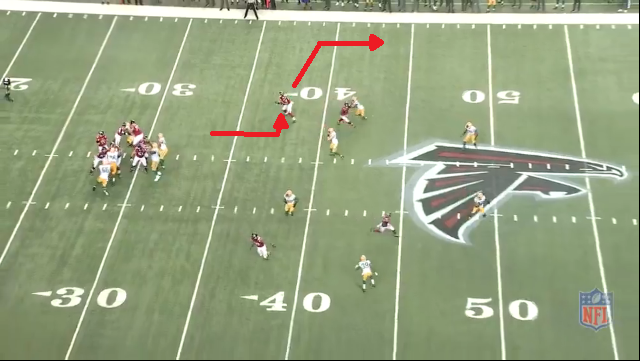 This 13 yarder occurred earlier in that same drive to end the 1st half. Atlanta comes out in a pretty interesting formation, with both receivers split only about five yards off the offensive line and two tight ends lined up in the backfield but close to each tackle. Hooper is just off the left tackle.

At the snap, Safety Micah Hyde blitzes Ryan, who is going through his reads on the offensive right. Freeman is able to pick up the blitzing Hyde just enough to give Ryan the time to scan the field and find the wide open Hooper in the flat. Hooper makes the easy catch and cuts up the sideline before being tackled. 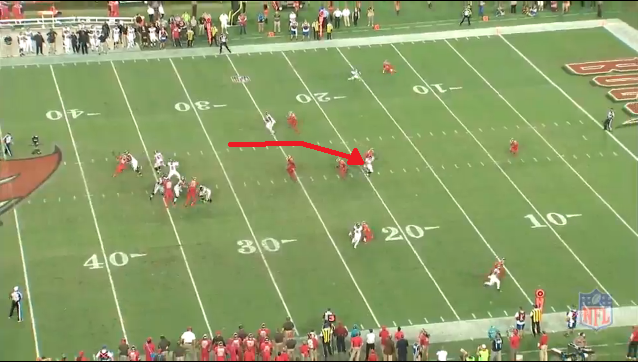 Hooper's other solid outing came during next week's Thursday night blowout of the Tampa Bay Buccaneers. The Falcons find themselves in a 3rd and 12, down 14-13 near the end of the first half. Hooper is again lined up in-line by the left tackle. The Bucs counter with a single-high safety, which the Seahawks use predominantly. Hooper runs a post route and is picked up by LB Kwon Alexander. Alexander is able to get hands on Hooper at the top of the route but really only pushes Hooper into the route he's already running, leaving himself a step behind the young tight end.

Matt Ryan has plenty of time with a three-man rush, scans the field, sees Hooper get open and delivers an easy 16 yard big play to set up the Falcons' go-ahead touchdown. 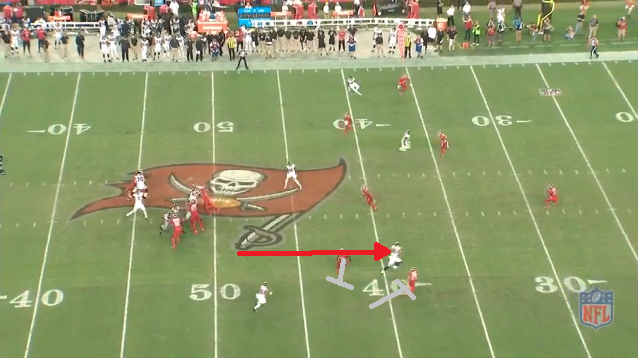 Later in the third quarter, the Falcons are again attempting to drive into Buccaneer territory. Atlanta splits three receivers to the left, bunching two of them in the slot. Ward is again in the backfield and Hooper is lined up in-line, this time off the right tackle. At the snap, Ward runs a wheel route, which LB Lavonte David goes to cover. Unfortunately for him, Hooper runs right past him, right up the seam. CB Brent Grimes notices the danger too late and is unable to close on Hooper, who Ryan immediately sees open in the middle of zone coverage and hits for the big 28 yard gain. 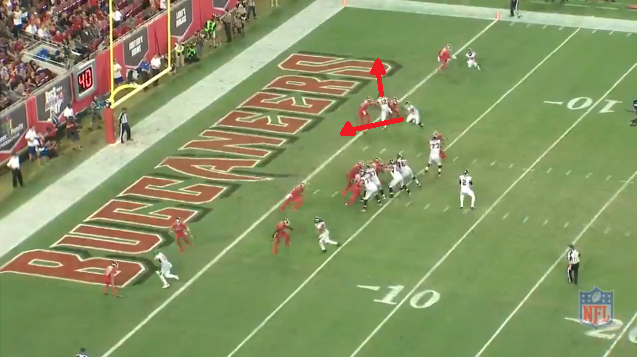 The Falcons are even able to utilize Hooper as a threat at the goal line. On this 3rd and goal play, Hooper initially is lined up on the left but motions to the right. Safety Bradley McDougald motions with Hooper, alerting Matt Ryan that the Bucs are in man coverage. At the snap, the other safety move to double-team Julio Jones (and why wouldn't you). Wide receiver Mohammed Sanu and Hooper execute a rub (read: pick play) route, giving Hooper the space he needs to get open for the easy touchdown pass from Ryan.

The Seahawks are very familiar with defending the rub route concept and will need to be up to the task if Atlanta uses their big tight ends in these routes.

Matt Ryan usually targets his tight ends if he progresses through his reads first; only on a few plays was Hooper clearly the first (or sometimes) only read, which was usually when the defensive coverage allowed Hooper to get open quickly.

The Falcons love to utilize their tight ends from formations where they are either in-line or very tight to the formation. The Seahawks didn't really see these sort of looks from Detroit last Saturday, as Eric Ebron decided to drop the majority of his targets while split out wide. Most of the time, our resident soul-reaper Kam Chancellor was given the coverage assignment on Ebron and performed very well. Ebron did get a target while lined up in-line and tight to the formation, with Kam defending him in-line and KJ Wright drawing the assignment on the tight split. Ebron was actually a slightly less athletic tight end prospect than Hooper (112.4 pSPARQ compared to Hooper's 120.2) so Kam shouldn't have a problem keeping up with Hooper in coverage if his reads are right.

While Austin Hooper and Levine Toilolo are in and of themselves not world-beating tight ends like Jimmy Graham, if the Seahawks don't take steps to account for them among the myriad other weapons Atlanta's passing game has, Seattle's visit to the Georgia Dome may well find themselves in the same position they did at the end of their last Divisional Round game against Atlanta: flying home to clean out their lockers.