The date is October 14th, 2012. Rookie quarterback Russell Wilson is fresh off leading the Seattle Seahawks to a crucial 16-12 road win over the Carolina Panthers. The 3-2 Seahawks hosted the 3-2 New England Patriots, and due to his ACL tear in 2008, this was Tom Brady’s first (and probably only) game at CenturyLink Field. It was a matchup billed as the #1 defense vs. #1 offense, and it didn’t disappoint.

This month’s special Enemy Reaction looks back at the first truly great regular season win of the Russell Wilson era, as Wilson threw for nearly 300 yards (on only 16 completions!) and three touchdowns, including the game-winner to Sidney Rice. Oh yeah, and Marshawn Lynch was held to just 41 yards on 15 carries, so the running game was of no use that day.

(Note: The very first game thread screenshot is actually a new SB Nation tool called “Image Slider,” so let me know in the comments section if you prefer this slightly more interactive method, at which point I’ll use it more frequently during the upcoming season.) 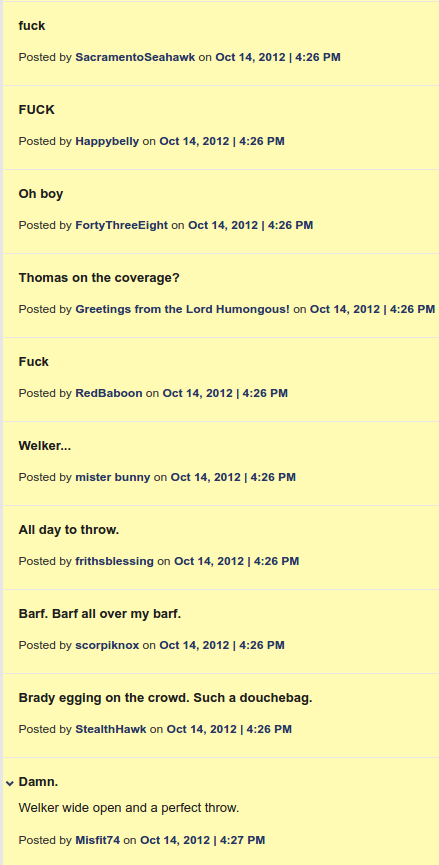 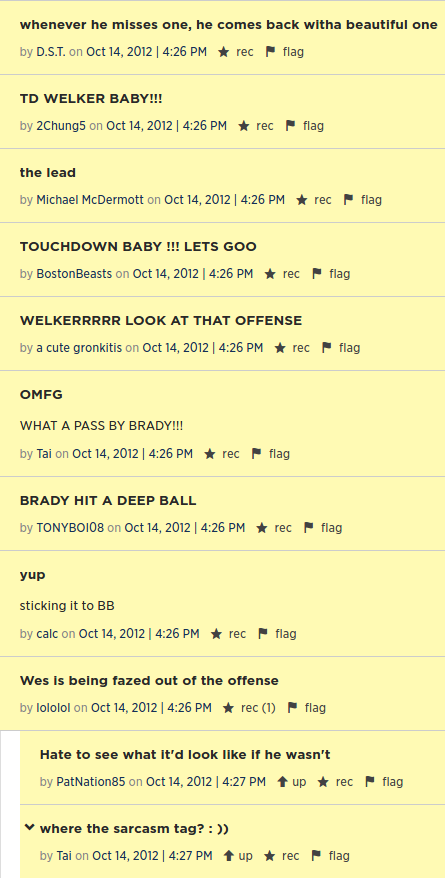 Russell Wilson pulls off magic act, scrambles for a first down (7-3 NE)

Tom Brady commits intentional grounding, leading to 10-second runoff and no points for New England before the half (17-10 NE HALF)

Zach Miller fumbles on the ensuing possession, Patriots recover and go up 23-10 with 9:21 left in the 4th quarter

Shocking, to say the least. The Patriots moved the ball up and down the field but kept beating themselves. It was poor clock management and an intentional grounding that cost the team points at the end of the first half. It was suspect play calling and an unwillingness to establish the run that allowed Tom Brady to throw a career high 58 passes. In the second half, the team had clock management issues and personnel issues, and as a result, burned all three of their timeouts.

It was an ugly game all around. And as much as the team outperformed Seattle for three and a half quarters, it's only the final score that counts. And the Patriots really handed Seattle the win. It was an uncharacteristic performance for a normally fundamentally sound Patriots team, and now they stand at just 3-3 through six games.

All three of the Patriots games, in fact, have been last second losses. Which begs the question, what are the Patriots doing wrong in the final minutes that they can't close out games? Over the last two weeks, the Patriots have been outscored 21-3 in the fourth quarter.

There's still a lot of time to turn around the season, and it's not a good practice to overreact to a single loss, but the Patriots have some serious work to go in establishing consistency week to week, quarter to quarter, and drive to drive. The Patriots are as talented a team as any in the NFL, but they simply don't play that way consistently.

Post-Game: The saltiness of Scott “Russell Wilson is the worst QB in the NFL” Zolak

Post-Game Video (NSFW language): YOU BLEW IT!!! (The Lee and Dave Show)

The next Enemy Reaction will most likely be a “remastered” version of the 2013 comeback against the Texans. Look out for that in mid-August, followed by the “Best of 2016-17” recap in September, and then we roll right into a brand new regular season. Thanks for reading and go ‘Hawks!