Breaking News Even in a down year, Seahawks still own 49ers 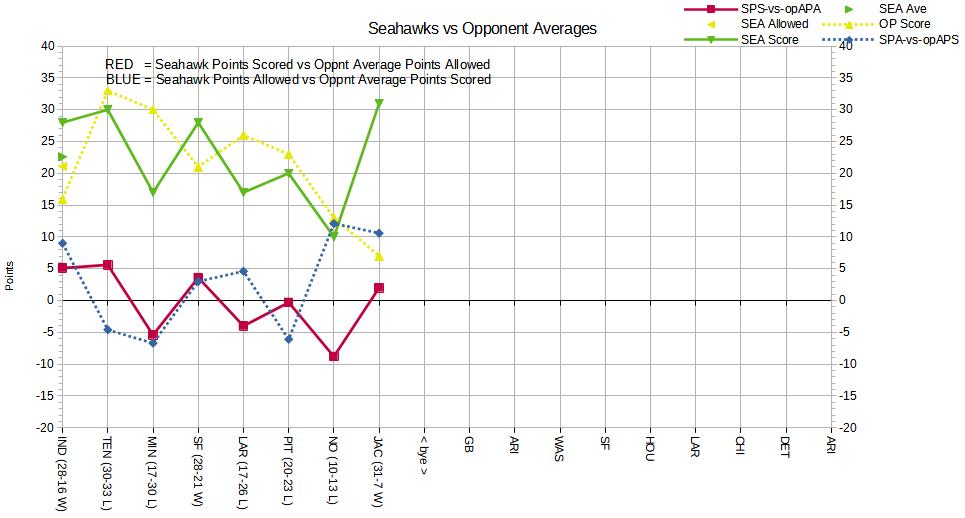 Vs the Opponent Averages

I consider a point on or near the zero line to be a so-so* result. Near +5 good. Near +10 or more excellent. Applies to both points scored and allowed.

Near -5 poor. Near -10 or more Bad.
* A point on or near the zero line means the team has scored or allowed what the opponent averages against the teams they have played so-far. That means you may win against teams that allow more points than they score but lose to teams that score more than they allow. Ideally, having both 'points vs average' above the line gives the best chance of winning the game ... the farther above the better.
Examples
The Saints game: The points allowed were in the excellent range but it was not enough to offset the bad points scored showing. The Saints average more points scored than they allow.

Note: Points scored are mostly by the offense. Points allowed are mostly by the defense. The mostly qualifier because of the naughty and nice pick 6s and other oddities.
The Jags game: The Hawks scored 31, why isn't the red dot higher above the zero line. Because the average points against the Jags is 29 points. The Seahawks were just being a bit above average in points scored. Thus the 2 points above the line.