I used the regular season average for each opponent in both points scored and points allowed. This gave me a zero baseline for each game to compare the Seahawks actual performance against. I am not going into the reasons they won or lost, the excuses if you will. It does not take into account rivalry, home/away, time of day, turf/grass/dirt, distance traveled, dome/weather, injuries, illness, suspensions, Sunday/Monday night, and a whole lot of other influences that go into a win or loss. It is just what was.

You can draw your own conclusions as to what they show if anything. I think 2020 was too erratic and that is one reason the Seahawks have a new Offensive Coordinator. A good defense can keep games in check even if the offense is not doing well but you need a bit of both. The graphs show that the Seahawks always start out with up and down performances through the first half of the year. The redeeming feature is that the offense and defense were mostly able to cover for each other. In 2020 the defense started mostly down and the offense covered with some excellent performances.

In the Super bowl years they also started the same way but a little less extreme. It isn't till the second half of each year that the defense really kicked-in but it was the defense that let down in two of these years and failed to cover a so-so offensive performance like they did in previous games.

I agree with the old saw that defenses win games. They have to be in top form for the playoffs as even stellar offenses can be compromised. A good defense can keep you in the game.

I look to this year to be more of the same pattern with a little more ball control by the offense to help keep the defense fresh so the defense can produce a strong finish. You don't need an outsized LOB performance. Just one that can cover for the offense when needed. I hope Mr. Norton and the players can rise to the challenge in their preparation, play calling/execution and in-game adjustments.

Don't get me wrong, the Seahawks have put together a lot of great seasons and I am looking forward to another one.

* averages and subtraction
The zero line is the opponent's average score. These numbers are different between points scored and points allowed. They are also different from team to team. They are the zero baseline because I wanted to show the difference between the average and how the Seahawks actually did each game.
An example from 2020: The first game of 2020 with Atlanta; Atlanta's average points scored is 25 and the Seahawks held them to 25. Their average points allowed is 26 and the Hawks scored 38.
I consider a point on or near the zero line to be a so-so result. Near +5 good. Near +10 or more excellent.
Near -5 poor. Near -10 or more Bad.
For the Atlanta game the Seahawk points allowed were so-so and the points scored were excellent.
Another example from 2014: The Seahawks held NE to 2 points below their Season average (30) (a so-so performance) and scored +5 more then NE usually allowed (19) (a good performance) and still lost. You could say the defense was at fault as much as the offensive failure at the end of 2014.
Red solid line is points scored vs opponent average (regular season) points allowed
Blue solid line is points allowed vs opponent average (regular season) points scored
Delta is the difference in points from the opponent's average 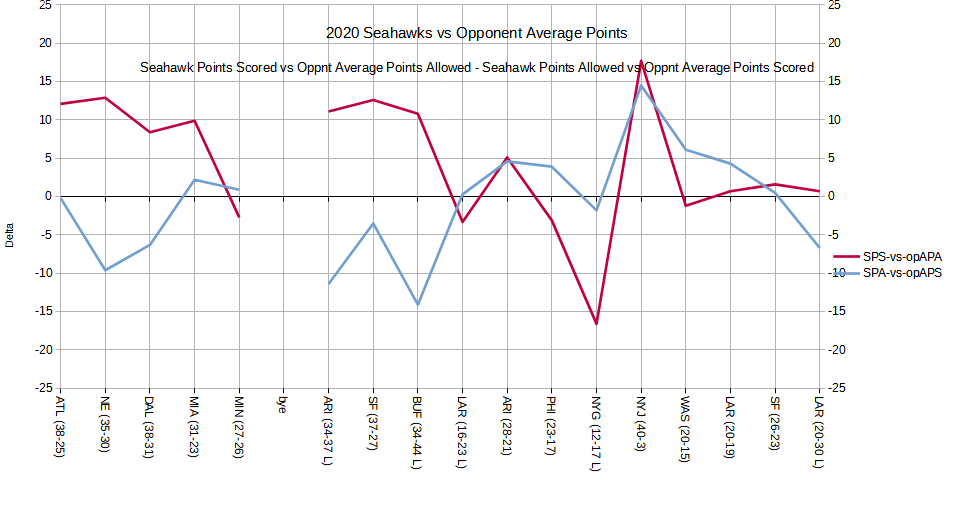 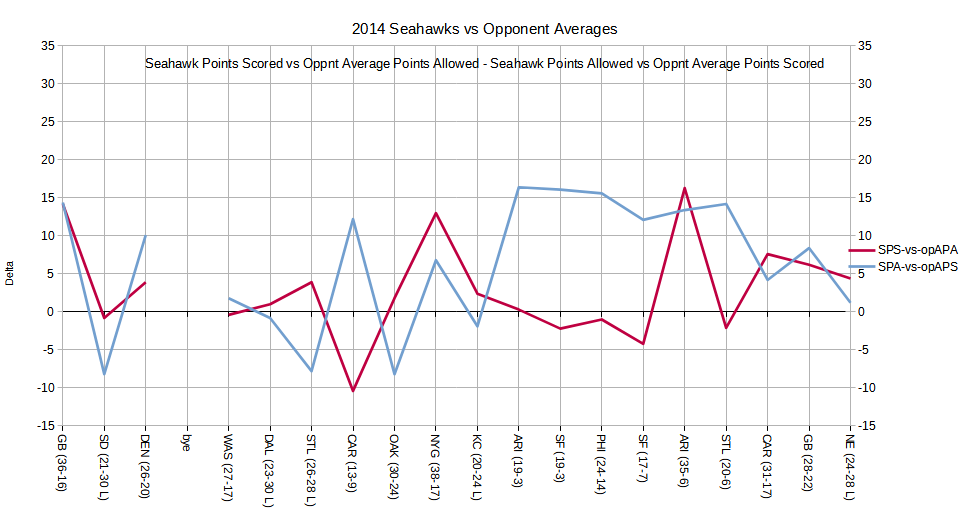 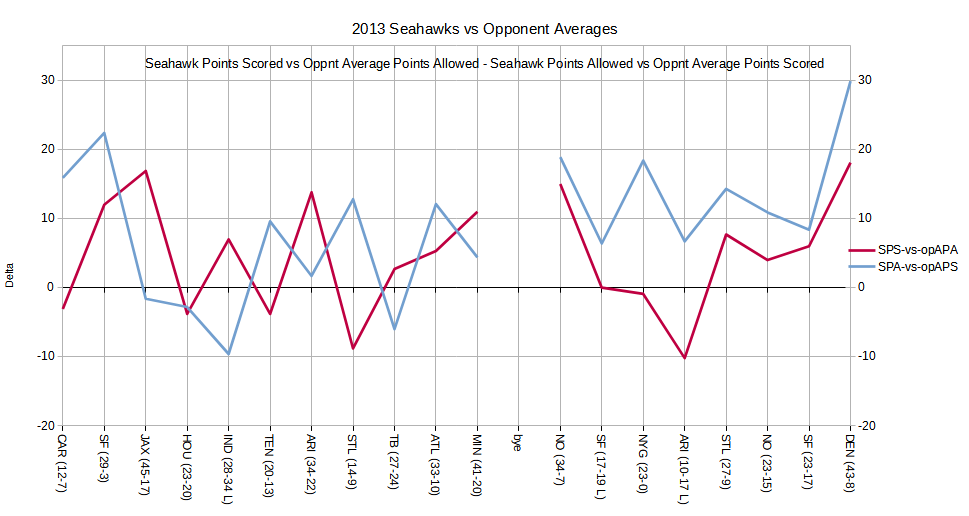