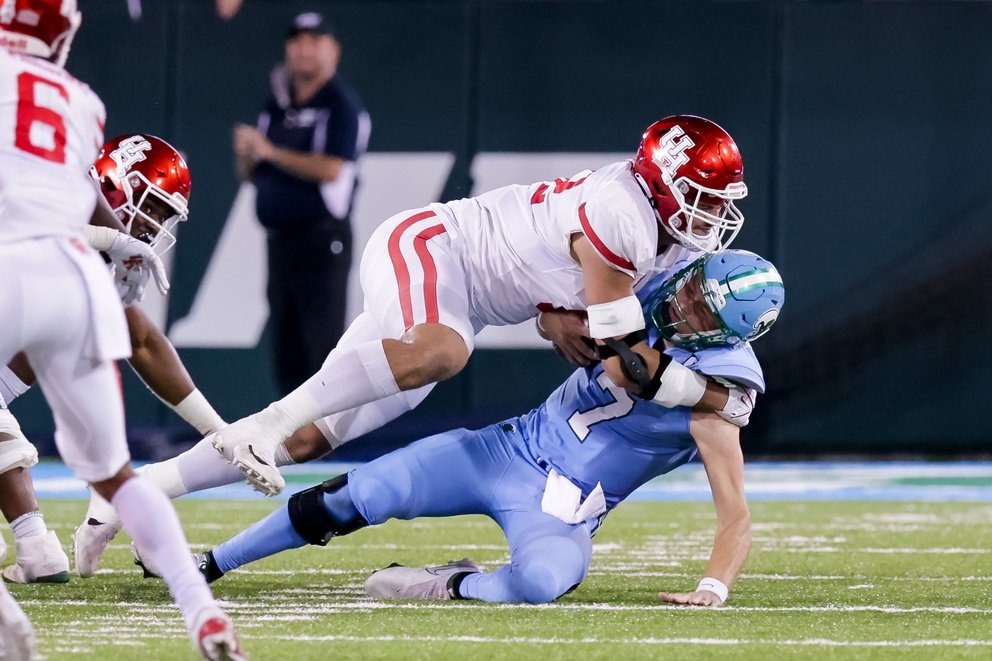 There are so many high end pass rushers, of all different types, in this draft that I can't help but look at them back to back. Throwing in Taylor too and you have the cornerstones of a dominate pass rush for the next window of winning. I want to beef up the OL, but the pure center class is underwhelming, so getting a developmental OT and a G so Lewis can move to C seems to be the best plan.

I am not a scout, nor do I pretend to be. I will give my thought process on drafting a guy, but will link and copy to other scouts and give you what they think of him, which is probably much higher quality than what you would get from me.

Instead of trying to figure out what trades will happen and have a bunch of you tell me how unrealistic they are, I am bypassing that completely. Instead, I am going to look at someone who might be available at round transition times. Starting with the end of the 1st/start of the 2nd, I will walk my way down the draft.

We don't know where anyone will be drafted, so don't @ me with an argument about someone won't be available when, that is completely besides the point. The point is that we look at a bunch of players who may be available and of interest to PCJS.

He is a 5T who can slide inside to 3T on pass rush downs. If we are going pure 3-4, he is made to be a 3-4 DE. Either way, he is disruptive from the inside and will open up rushing from the edges.

NFL.com Hard-working, two-year starter with projectable frame and developmental traits whose best positional fit could be in the eye of the beholder. Hall played defensive tackle in college, but his playing style and physical profile are better suited for defensive end in a 3-4 alignment. He's segmented and a little gradual in his attack, but flashes violent hands and forward charge as an interior rusher.

The Draft Network Logan Hall is an ascending talent that combined mental and technical growth in 2021 to produce his best season and vastly improve his overall valuation. Houston plays him all across the defensive line, giving him plenty of chances to play on the edge and interior as both a run defender and pass rusher. Hall features a long, stocky, and well-proportioned frame that is engineered to play defensive line in the NFL.

Mafe's projections vary widely from end of the 1st to the end of the 3rd. He isn't a finished product but has the tools to be an excellent outside rusher.

NFL.com His combination of rare explosive measurables with average fundamentals could make for a perfect storm of rapid development once he gets focused skill work at the pro level. His footwork is average, and he lacks desired instincts as a rusher, but pairing efficient hand work with twitchy upper-body power could turn him into a productive rush bully. He has the traits and toughness to develop into an above-average starter as a 4-3 base end.

The Draft Network Minnesota EDGE defender Boye Mafe is a high-tools prospect on the edge who projects best to the pro game as a traditional 3-4 rush outside linebacker. Mafe offers great athleticism on the edge and his flashes of effortless movement skills in space are an easy sell when projecting his pro game to the next level. I do believe Mafe is more of a developmental player than a plug-and-play starter, but the trajectory of Mafe's play with the Gophers has been on a steady increase for the entirety of his career with the program, culminating with a career year in 2021 with six sacks, nine tackles for loss, and 30 tackles (all career highs).

You don't get plug and play LTs at this point in the draft. You have to look for traits and potential and that is what he is. Its all there, he just needs a year or two to develop into a long term LT solution. In the short term though, he is a plug and play RT who can start right away.

NFL.com Lauded by coaches and scouts for his toughness, consistency and leadership, Mitchell has the athletic traits and hand quickness to make a living as a left or right tackle. He works with independent hands for improved early control of the pass rep.

The Draft Network Mitchell is an athletic tackle that can get great depth on his pass set to beat defenders to the point. Mitchell also has good lateral movement and can mirror pass rushers when they attempt counter moves and change direction. While Mitchell has good lower lateral movement and ability to redirect, he lacks upper-body strength, which affects his ability to quickly anchor against defenders who are attempting to convert speed to power. Mitchell shows athletic traits that translate to the NFL, but his success will be determined by his ability to gain upper-body strength to not only be able to effectively block speed rushers but also rushers who have an element of power in their game.

He was impressive in the senior bowl and should plug in as center or move Lewis to center and plug him into LG. He is a perfect fit for an outside zone run team and he is good in pass pro.

NFL.com Highly experienced interior lineman who does a nice job of staying on schedule. He shines over the first two phases of the block, which means he gains early positioning and gets into the sustain phase with proper hand usage and footwork. He will lose a tug-of-war battle as a pure man-to-man blocker, but wins with lateral quickness and an understanding of angles as a move blocker. A snappier pass punch is needed to prevent sub-package rushers with hand talent from bypassing him too easily. His frame and play strength are a little below average, but he has done some snapping in practice, so he could land as a future starting center for a zone-happy rush offense.

The Draft Network Cole Strange started 44 games during his time at Chattanooga with 41 of those coming at left guard, two at left tackle, and one at center. He does offer positional flexibility but I like him best at guard where his run blocking and football IQ are best on display. Strange is an aggressive but controlled blocker that has a nasty demeanor with good power. He's a good athlete that showcases the ability to work laterally and hit blocks in space. He's a people-mover in the run game and his motor always runs hot. In pass protection, his punch is firm and he has a stout anchor. He has terrific awareness and understands body positioning.

I don't think you can have too many CBs anymore. He is small school, so he will wait, but he is long and athletic with ball skills to match. I would love to see this guy on the right with Reed on the left and move Brown to the slot. That sets up for a nice window of coverage.

NFL.com Small-school cornerback with big-school traits and talent. Williams is long-limbed with the versatility and talent to play in any coverage. The footwork in press needs to be cleaned up and he allows some separation at the break-point against quicker targets, but his above-average foot agility and speed are the key to his ability to recover and recalibrate positioning. On the flip side, his size, length and ball skills stand out on tape and make it easier to project success as a competitive, downfield cover man in time.

The Draft Network An imposing player in the DII ranks, Williams swallowed up receivers in press coverage and didn't give them a chance to get into their route stems. He was sticky in off man and played with the confidence expected from a guy that was the best player on the field and he knew it. Despite a limited amount of targets against him, Williams was still able to make impact plays on the football and is an alpha on the field. He's a willing participant against the run and is an enthusiastic tackler.

So much of this guy sounds like Chris Carson. He doesn't jump out in any one area, or at the combine, but he gets the job done. We need more RBs, because they are always hurt and I don't think Carson plays again, or if he does, makes it halfway through a season.

NFL.com Brooks will be knocked for a lack of suddenness and explosiveness, but may end up becoming a more effective NFL runner than evaluators expect. He's a tempo-based runner with an ability to switch gears inside the run when needed. He has adequate size and vision but really impresses with his ability to maintain space from defenders as the run progresses.

The Draft Network In 2021, Brooks ran for more than 1,000 yards with a dominant performance coming against Texas in the Red River showdown—he ran for more than 200 yards and two touchdowns. Brooks is a downhill runner who runs behind his pads, which allows him to power through defenders. Brooks is a hard player to tackle because he has a wide base that helps his balance to fight through tackles.