There have been a lot of comments here discussing Seahawks UDFA Levi Lewis. I thought it might be worth my time to watch a bit of game tape and see what I can see. Unfortunately, I wasn't able to find any Louisiana All-22 sitting around the internet. I'm stuck using TV broadcast footage from youtube. On the plus side, this means I can and will link you to every play I break down so you can see what I see without having to make gifs or videos myself. On the downside, scouting off broadcast footage is absolutely terrible.

I'll go through a few plays that catch my eyes as I watch them, and give you some general thoughts at the end

Lewis takes a clean 3 step drop out of the shotgun, but then crow-hops twice coming forward. I have no idea what the downfield coverage looks like, but Lewis does a nice job of recognizing the drag from #87 has pulled the hook defender towards the top of the screen and left him very poorly leveraged with the running back for an easy first down.

If he had gone down-field with that double crow hop I'd be pretty upset as that sort of thing really reduces downfield accuracy and the delay in release often results in a DB being able to recover and make a play on the ball. As is, I think he might have been moving just to get line of sight on the open RB, so while I don't like it, I don't hate it either.

Texas runs a really nice double-A gap crossing blitz that fools the right guard and leaves a free runner up the middle. Lewis does a nice job of evading, re-setting his feet and looking upfield. Unfortunately, he looks at #18 on the central crosser (who is well covered), an doesn't notice that 21 is open on the outside.

The center who doesn't have enough mobility to stay with the other blitzing linebacker gets dumped on his ass and the play results in a sack.

Part of the reason I think these last two plays really stuck with me is they're both things Wilson seldom did. On that first play Wilson almost certainly would have tried for the downfield pass (I feel pretty comfortable saying that without even knowing what the downfield coverage looks like), while on the second he very likely would have bailed from the pocket against the blitz and tried to scramble right. The scramble probably would have been better than taking the sack here, although I will never fault a QB for staying in the pocket and trying to make a play.

I don't know who the wideout on the bottom of the screen is, but I like him. It's a simple curl, but the guy slams the breaks so hard that the corner over the top falls on his ass trying to duplicate the move. The whole thing happens off-camera, but you can see the DB getting back to his feet around the 40 yard line as the WR catches the ball.

Given how much cushion the DB was giving, even if he hadn't fallen over this is probably an 8 or 9 yard gain, which is probably what the OC was looking for on 2nd and 13.

I didn't really notice until about the 3rd time I watched the play but the footwork on Lewis's drop is really odd. He takes tiny little shuffle steps like a fighter trying to retreat while keeping his feet under him.

What I really wanted to show here is Lewis's footwork at the release point. (See image below) 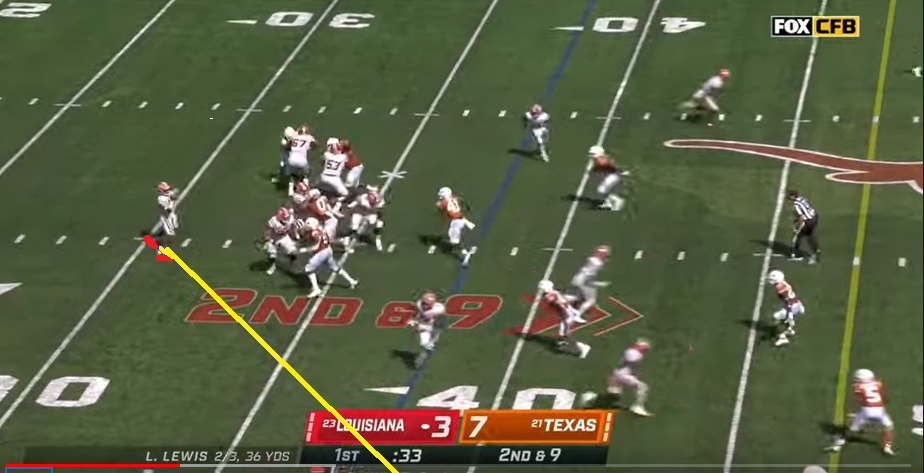 I've highlighted Lewis feet in red. The yellow line goes from the front toe of one foot to the front toe of the other. In general, you want the ball to travel down that line, or something fairly close to it.

I'm not sure who Lewis was trying to target with this throw (I suspect #88), but the ball goes nowhere near the yellow line nor does it go anywhere near a receiver. I'm not going to call this out every time it happens, but if you're scouting Lewis yourself, every time you see an off-target ball, go back and check his footwork. Based on what I've seen from the videos I watched last night as well as thus far during this one I'd wager that 9 times out of 10 when he's inaccurate with the ball and not scrambling, lewis's feet are too open for the throw.

The good news is that this is something that is generally correctable given enough time and focus on it. The bad news is that until it's corrected, it can have a large and extremely negative impact on a QBs accuracy.

Remember on the first play when I said I'd hate that double-crow hop after the drop if Lewis went downfield with it? He does this time, combined with a "cinderella" or "heel click", where as you step up your feet come very close together and your heels tap. Lewis was lucky he missed by enough that this ball wasn't intercepted.

I have 5 more games queued up, and initially wanted to do this for all of them. But for sake of brevity I think it's best to watch the rest without comment and leave closing thoughts below. If you want to do some amateur scouting yourself, here's the remaining games.

Pocket Presence: No doubt at least part of this is because the Ragin Caujins had above average O line play, and Lewis operated exclusively out of the shotgun and pistol. But he very seldom scrambled his way into trouble

Versus the Blitz: I don't know if Lewis' ability to evade free runners is going to translate from the Sun Belt to the NFL. (Probably won't) What will translate is his ability to recognize blitz pre snap and the fact that he almost always then throws into the area vacated by the blitzing defender.

Progressions: Lewis seems to have a decent understanding of coverages, and how that impacts passing concepts. He fairly regularly made it to his second and third read, and was entirely willing to take an open checkdown for 6 yards rather than forcing something downfield into double coverage.

Rushing: Lewis is an enigma to me as a runner. He very shifty laterally, but he's not particularly fast. I mean, he's *really freaking fast* fast for the Sun Belt, but - checks google - he ran a 4.74 forty. That's certainly fast enough to be a rushing threat, but it's slower than most pro linebackers. I think this is where the Kyler Murray comparisons come into play. Neither guy is a burner, but they're both so laterally agile that they can evade defenders who would otherwise have them dead to rights.

Ball Security: Lewis has a few WTF throws on tape, but he rarely throws into double coverage and is seldom surprised by a defender being in an unanticipated location. In his three seasons as a starter Lewis put up 65 touchdowns versus only 15 interceptions. That's particularly impressive for a guy who really struggled with accuracy.

Deep Passing: More often than not, Lewis's deep ball was off target. He also tended to favor a lower trajectory that didn't allow his receivers time to adjust to the throw and come down with it. I also noticed a lot of "hopping" into the throw, which hurts accuracy, and is usually done because the QB doesn't have (or doesn't think he has) the arm strength to get the ball to the spot.

Footwork and Accuracy: Lewis has below average accuracy even for a collegiate level QB. His career completion percentage isn't bad, but it's heavily inflated by an offense that used a lot of screens and slants. I think a lot of the accuracy issues stem from poor footwork, which is why I've lumped the two together. However it's possible that even if he gets the footwork fixed he'll still be inaccurate as a passer.

Under Center: Across six games I don't think I saw Lewis take a single snap from under center. Seattle generally is near the top of the league in snaps taken from under center, which is going to be a very large adjustment.

YAC potential: This is mostly an extension of accuracy. Yards after the catch are primarily a function of play design and really good ball placement. To borrow a scouting phrase, Lewis's ball placement is "general rather than specific". On in breaking routes like slants and crossers Lewis could generate a lot more YAC yardage for his recievers with better ball placement.

My expectation right now is that Lewis beats out Jacob Eason for the job of practice squad QB. I think it's bad mechanics more than shortness that kept him from being drafted. Until/unless they're corrected I wouldn't want Lewis as my primary backup, much less as a starter. The good news is that mechanics are fixable, and we've seen high upside QBs come into the league with terrible mechanics that became superstars once corrected (See also; Allen, Josh).

He's always going to have to play around having below average arm strength. I'd compare him to a late-career Rothlisburger in this regard. He can make the throws, but consistency going deep is going to be an issue. This means you need a play-caller who can work around that and a QB who's willing to dial down the aggression sometimes. Lewis is certainly the latter, although we've seen no evidence that Waldron is the former.

I think it's a long-shot that Lewis develops into a starter (although it is possible), but there's enough to like that I wouldn't be surprised if he carves out a nice career as a backup and even earns himself a reasonable second contract.