(Editor's Note: I know this fanpost is a week old but I'm giving it front page time)

TLDR: A lot. Like, a lot a lot. Scroll to the bottom if you just want the answer.

If you have slogged through the tedium of my season conclusion article (and understood it), that will probably help you understand this one.

My driving question was this: can we look beyond wins and losses and determine if teams earn their wins? If the opponent was replaced with the most averageiest average NFL team possible, would they still win? Can I co-opt the visceral immediacy of the binary win/loss and its hold on the mind of the average football fan?

Well this isn't a Buzzfeed article and the answer is all the above. I just had to use science. (Kids, don't use science. Not even once.)

I use Expected Points Added (EPA) data to drive my metrics (after filtering down to neutral game scenarios and eliminating special teams). I then adjust each game's tally by opposition's average EPA (by seasonal average and by a rolling window centered on the week (with a Gaussian weight and a stddev of 2.25, if you really wanna get into it)). My other, aforementioned article really digs into that data. I use the same data here but drive even further metrics.

The first is Earned Wins (EW). It's somewhat mislabeled since the scale and unit of the number are unexpected, but it's just the first step. EW takes the Opponent Adjusted EPA per Play (OAEPAPP) value and adjusts it for league average. It's almost the same number since the league-wide average EPA/play is quite small, but I adjust for it regardless. I compute offensive and defensive EW separately and then combine them, yielding a single number per game that is positive if they earned their win and negative otherwise. 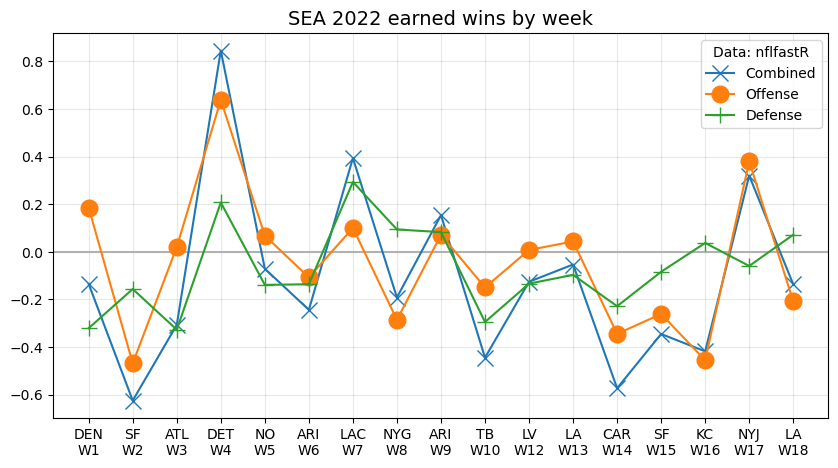 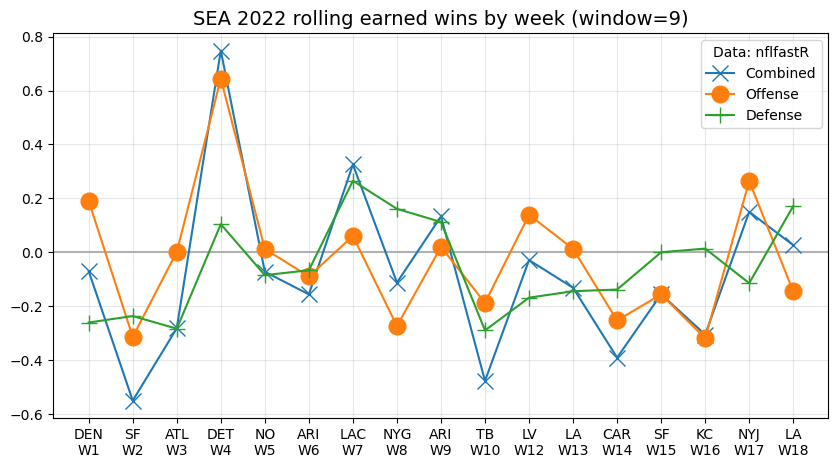 There is clear similarity between the two averaging types but they do disagree on whether the last game should be an earned win or loss. Neither is "correct" but are just different interpretations of the data.

The next step is quite easy and possibly misleading, but then, raw wins and losses are also potentially misleading. I convert the EW to a Binary EW, telling me yes or no if the team earned the win. The result may be controversial but keep pressing forward.

Now we get to something interesting: EW carries. When a team earns a win, to which unit (offense or defense) do they owe the victory? On a scale from zero to one, I calculate by how much the offense carries the team in a win and similar for the defense. If both units do well, they share the carry and sum to one. If either unit does below average, the other unit takes the full carry for the week.

Then, of course, the natural complement is EW drags, tracking how much blame the offense and defense get when the team earns a loss. Let's take a gander at SEA's weekly record for carries and drags (this chart is hard to make sense of, but I suggest tracking a single color/shape horizontally instead of looking vertically): 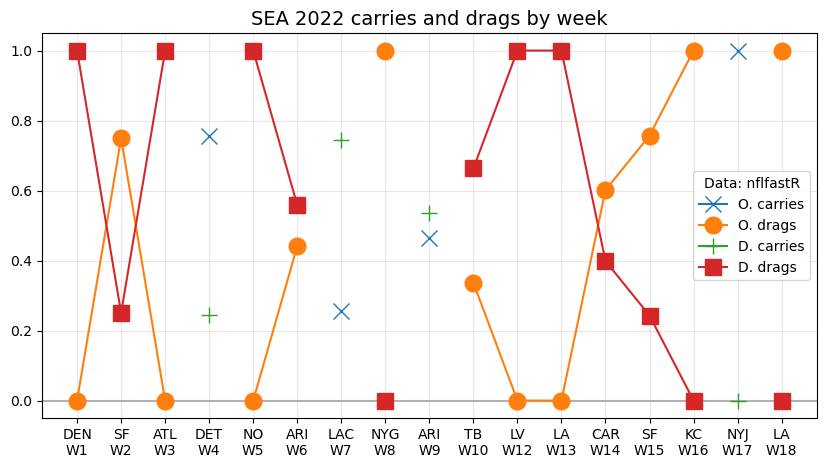 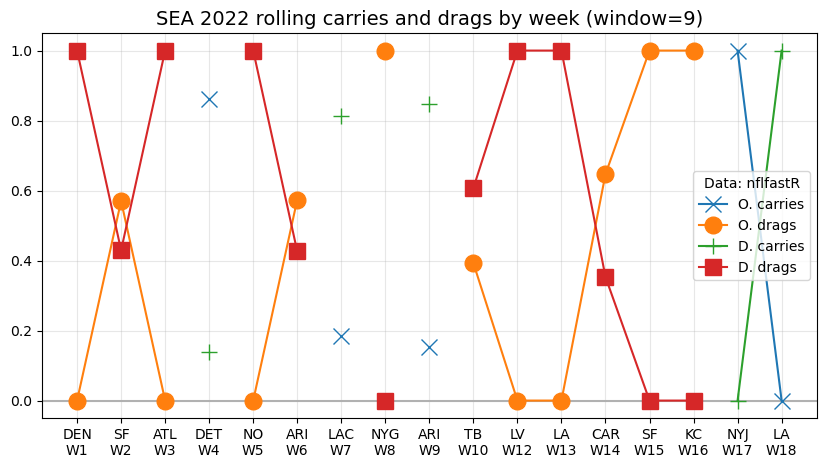 The SEA graphs are kind of a mess because their offense and defense keep swapping full responsibility for earned wins and losses. They rarely share. Now, if you are like me right after I got this data, you might wonder just WTF it means. How does it compare to the rest of the league? I agreed with you earlier on the timeline and generated these graphs: 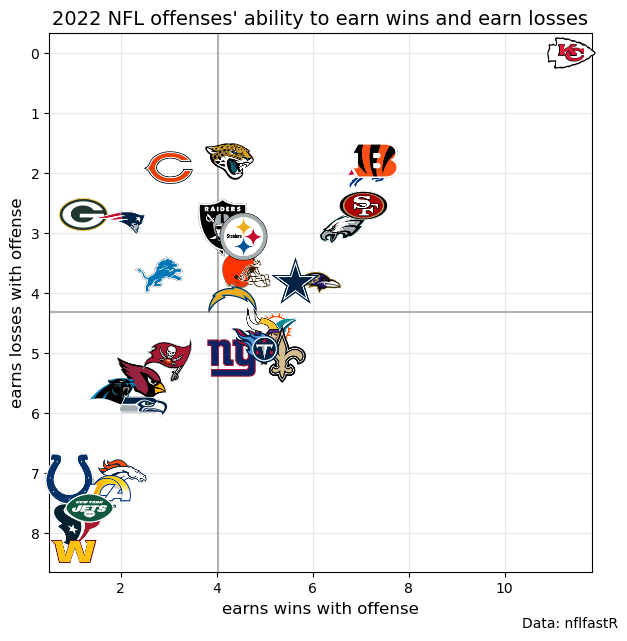 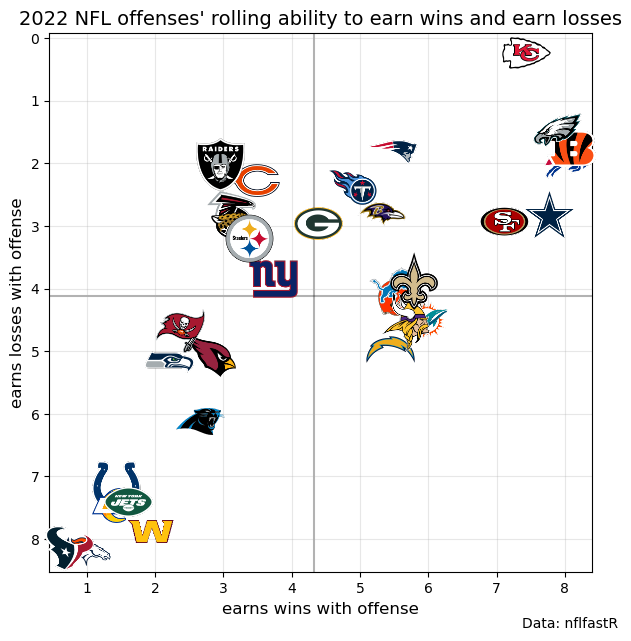 KC has an annoyingly good offense. In the first graph, they literally never took blame for an earned loss and took full accolades for almost every win. Now, ability to carry in a win and not drag in a loss are not the end-all metrics. They're just interesting ways to look at teams. HOU and DEN are down at the other corner, pulling up the NFL's rear. Now for the defenses: 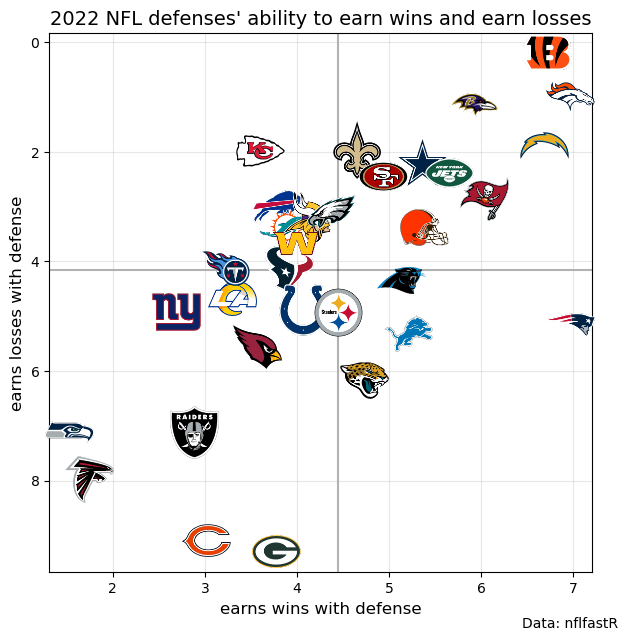 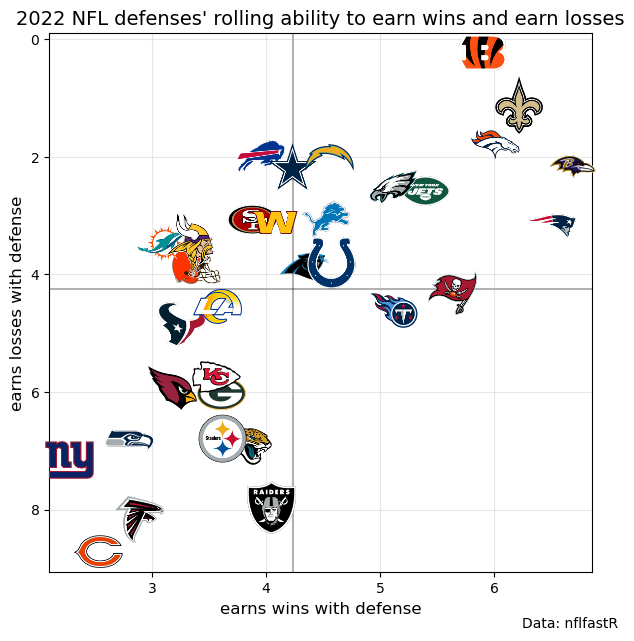 It's harder to consistently carry a bad offense with a good defense, it seems. Similar to the offensive chart, there is a clear linear trend between the two metrics. And that's as you'd expect, that a bad offense would deserve less acclaim in earned wins and more blame in earned losses.

After all that running about, advancing behavior, what is there left to be said? I think just the BEW table is left. I listed below the earned win/loss record per team with the difference from actual win/loss in parentheses (it can be thought of as the wins due to schedule (or losses due to schedule if negative)):

That's with adjusting per-game EPA by opponents' rolling averages. The big schedule winners are MIN and SEA, tied at +4. NE's 4 schedule losses are only eclipsed by NO's 5. At least according to this metric, schedule is a big factor in determining playoff appearances. There are not many SEA fans acting like their team just earned a 5-12 record, yet in a way they did.

If you shift to adjusting the EPA by opponents' seasonal averages, not much changes. DEN leads the league in schedule losses with 4, NE drops to only one loss by schedule, and SEA leads the league with 5 schedule wins leaving MIN's 4 behind. So if you thought the 5-12 earned record was harsh, Hawks' fans, the 4-13 record is probably unacceptable. It's only made worse by DEN earning enough wins to basically swap win/loss records with SEA.

So the answer to the article's title is: between 4 and 5 wins by this metric. Enough to completely change the postseason rhetoric.