What do you do without your top player?

One of the important qualities that the Seahawks coaching staff carries within their version of the defense's scheme is innovation and their willingness to move away from the norm. You saw Pete Carroll favor taller cornerbacks and adopt the modified defensive end position he calls the LEO; you saw what happened when then-failed DT Red Bryant moved to five technique. This thinking process of constantly making adjustments based on player strengths has paid big dividends on the D-Line unit in general, where Seattle has implemented a heavy rotation amongst their versatile unit of players throughout a game. (A refresher of this can be found here, and I recommend reading that before going on.)

When Chris Clemons, the best pass rusher on team, was lost just as the Redskins were trying to come back down the field, down one, for a score, with a decent backup QB, it was only natural that the Seahawks did what they do best.

On the first seven snaps that Kirk Cousins played for Washington, the Seahawks responded with seven different looks on the line.

And the best part? Cousins was trying to run no-huddle.

The first front the defense lines up in is a 4-3 even front. While Danny and the rest of the writers have been constantly talking about the "under" and "over" of the defense, the "even" is less widely used in the league. The major change between the positioning of even, as you see below, is that both the interior DT line up in a 2i/2-technique rather than one 3-tech and one 1-tech: 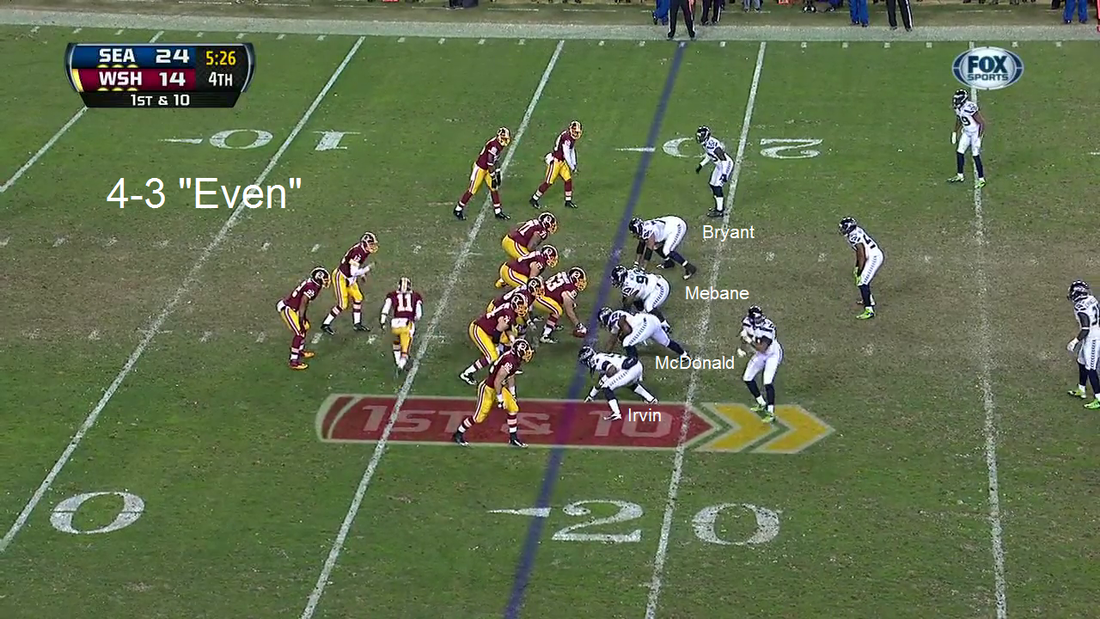 One great way to tell where a DL is lined up at is where their head is in correspondence to the offensive lineman's. You can see that Clinton McDonald is lined up in front of the weakside guard while Brandon Mebane has moved out a little bit from his usual one-technique spot. As a result, overall this creates a more outside rush that leaves the middle of the interior exposed. You can also see below that all four DL "duel" their respective OL at the point of attack, forcing the center Will Montgomery to decide who to help: 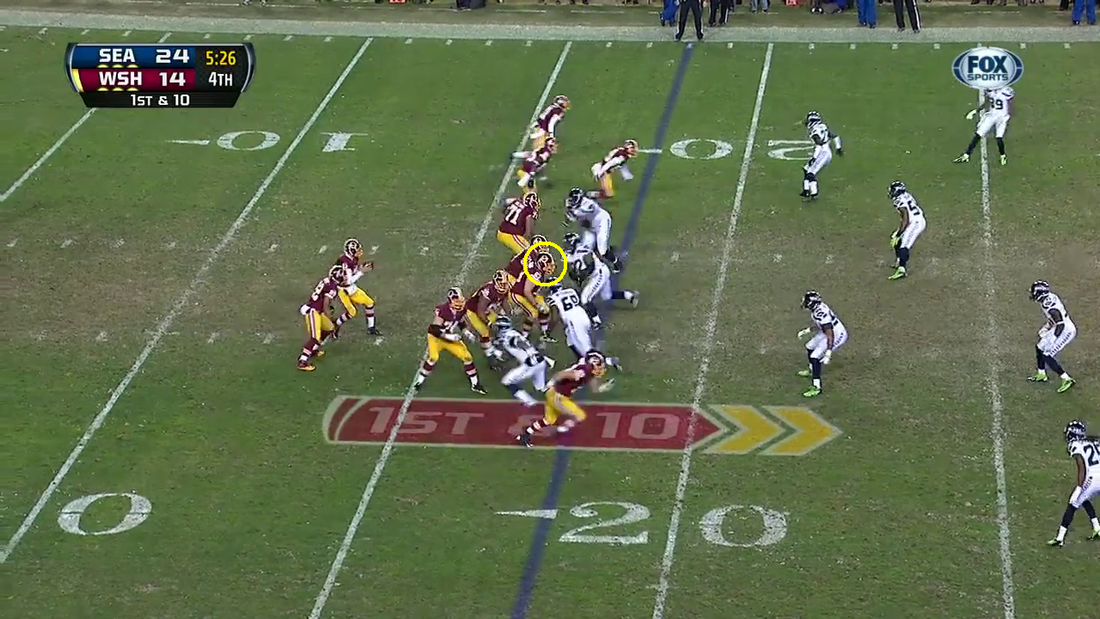 By the nature of their positioning, you can tell that both the exterior lineman, Red and Irvin, both rush from a wider angle more akin to a wide-9 margin. The one-on-one tell between Mebane and McDonald also become evident as they also aim their rush to the outside, rather than to the inside; 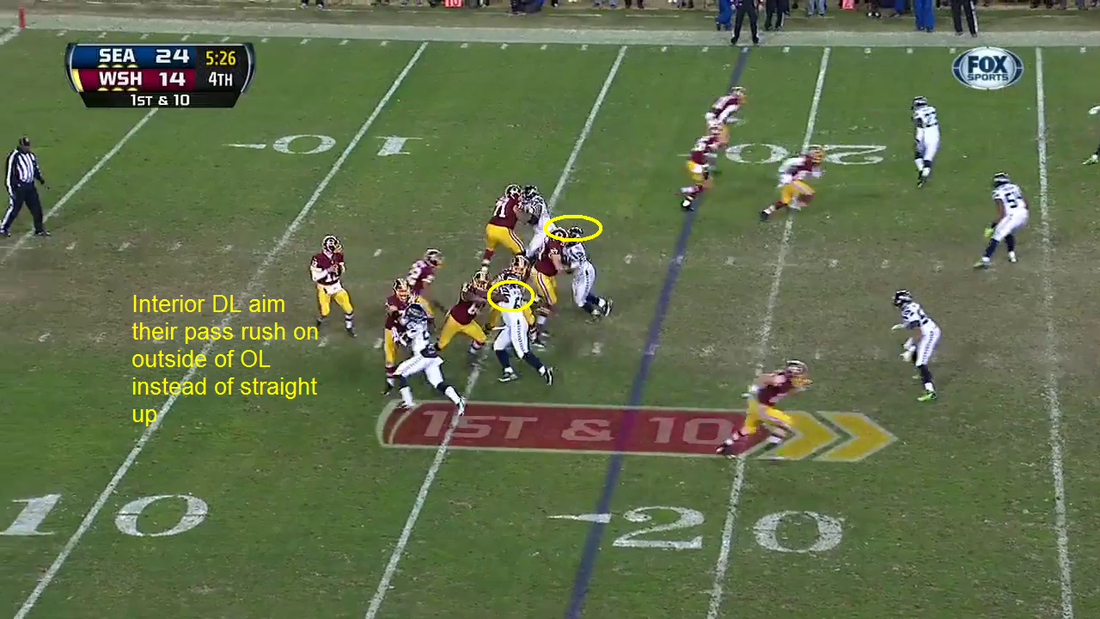 The purpose of a even front is to maximize the potential for a one-on-one matchup within the line, and you can tell that it works to great effect for the Seahawks. By the end of the play, Irvin, Red and Mebane have all beaten their man soundly. McDonald also partially wins the battle here, forcing the center Montgomery to turn his shoulder and help contain the rush so that the RG Chester regains outside leverage. This opens the way for Mebane to bull rush the hell out of the LG and within one second of another sack: 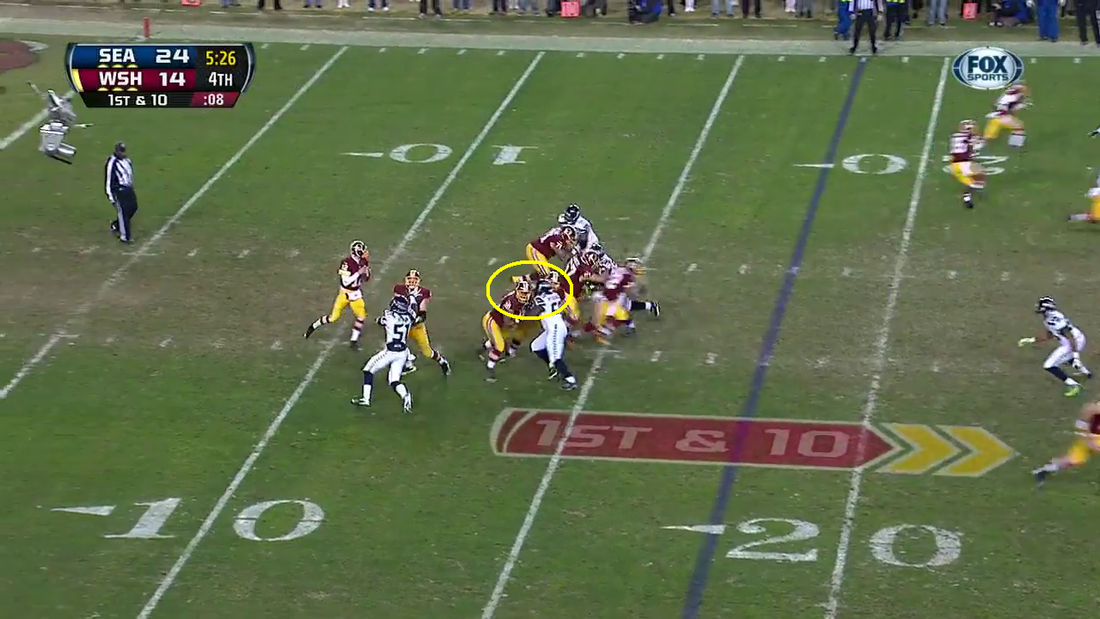 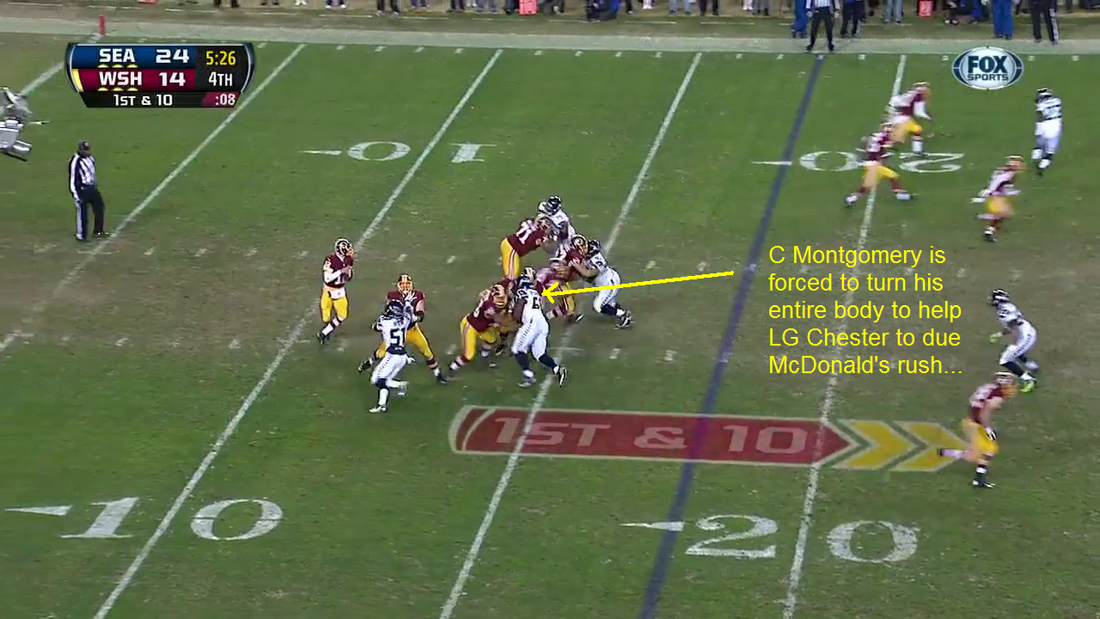 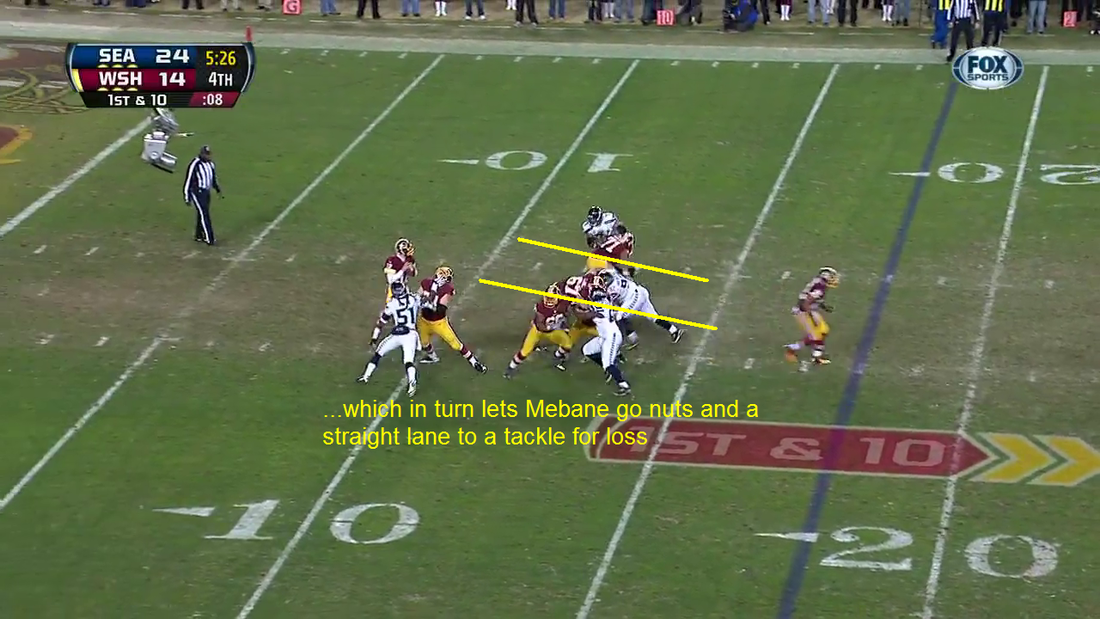 Cousins holds up under pressure and rifles a pass down the middle for a 15 yard gain. He quickly picks up the offense while the Seahawks continue to rotate the front: 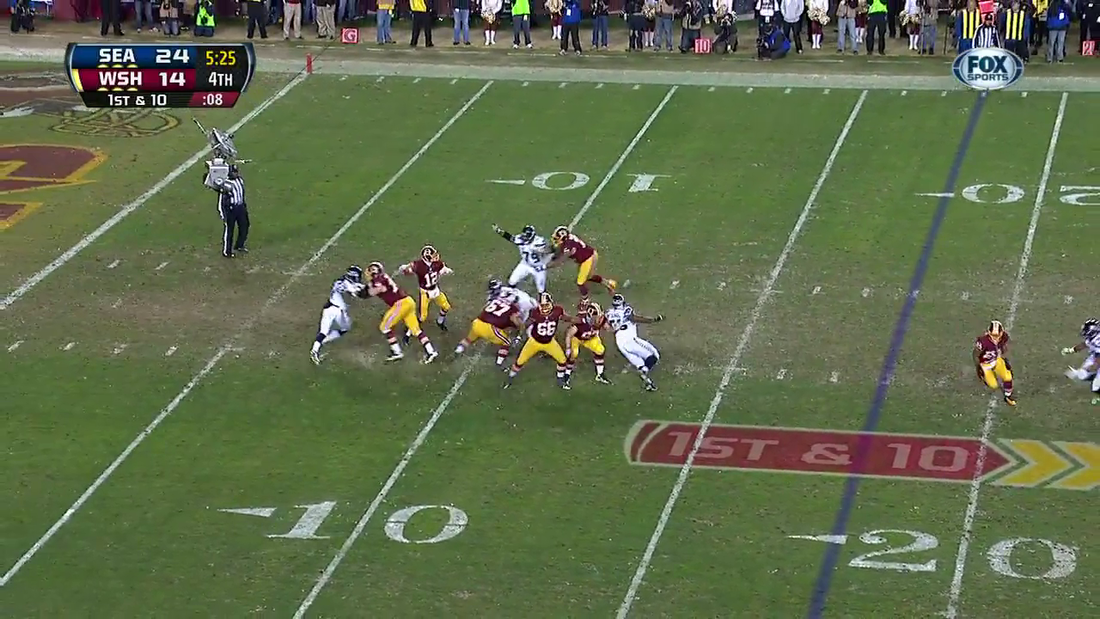 After letting them back with a big gain, the front lines return to a more natural look with the 4-3 under. Pretty much the same thing here as Danny outlined in the past offseason. To the naked un-trained eye, it disguises itself well as an 5-2 or even 3-4 design, which emphasizes again the hybrid factor behind Pete's defense. 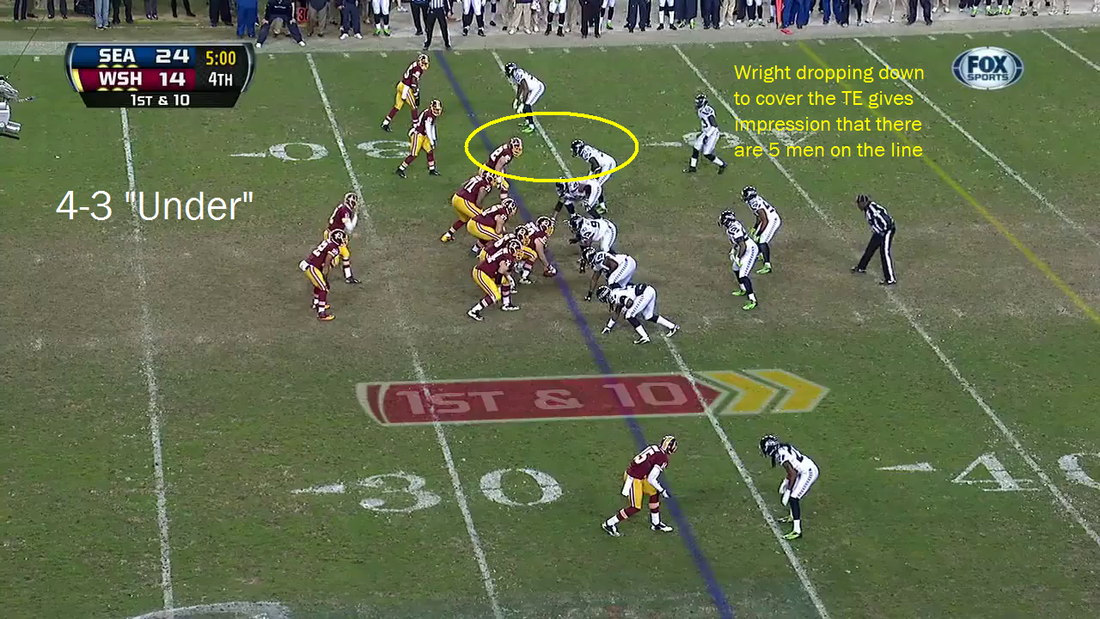 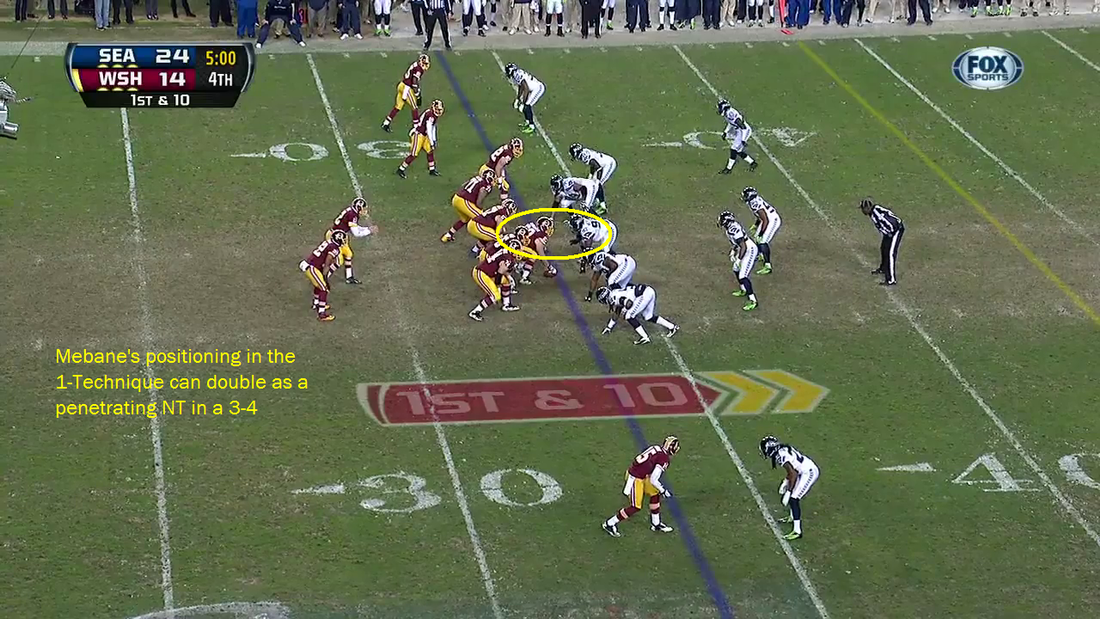 Nothing much to note about this play, except Irvin putting a good club on RT Polumbus, swatting him inside from his outside shoulder and getting the incomplete pass and pressure.

With a brief break given on the incompletion, the Seahawks throw their first curveball at the Redskins offense. Subbing in for McDonald is Greg Scruggs, who lines up as DE while Bryant goes back to his seemingly natural position of DT. This is what we would call the "Jet Ends" look, or the primary scheme that Irvin comes into play the most: 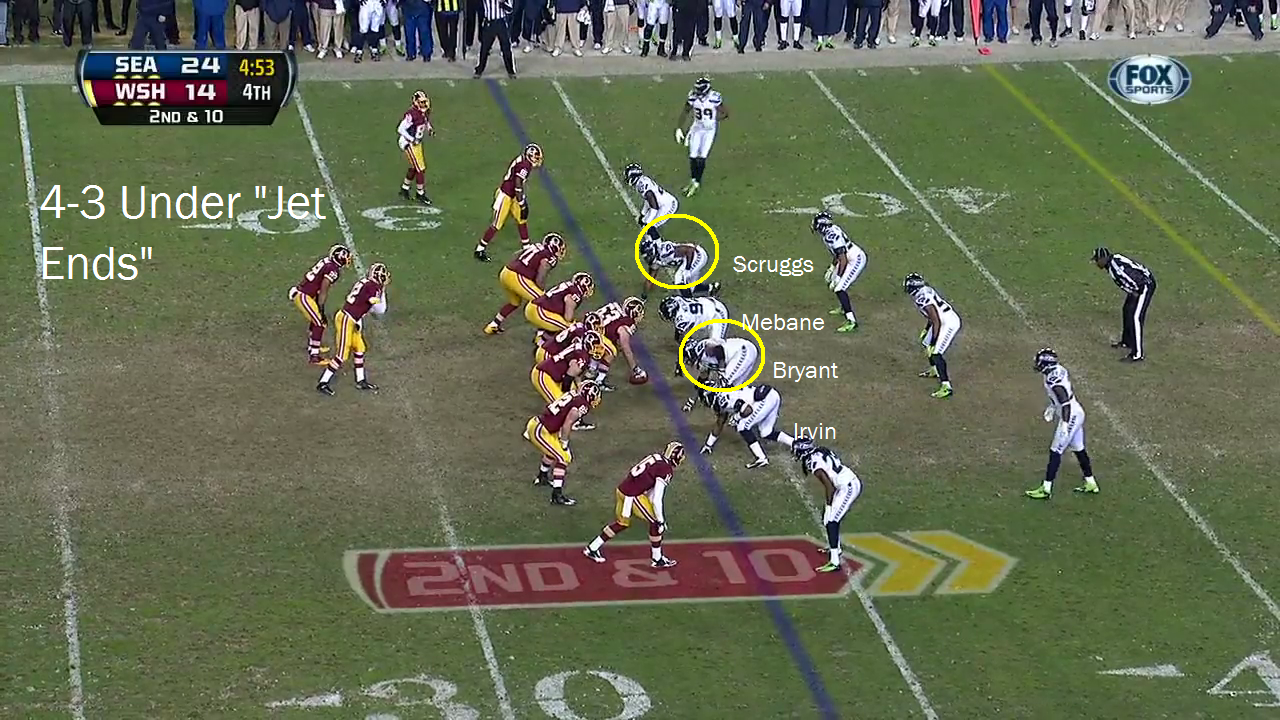 Apart from the main difference of personnel change, the Jet Ends play is also designed as a pass rushing play, with both Irvin and Scruggs playing the LEO position at a wider technique (split between 7 tech and 9 tech). Notice also Chancellor dropping down as an impression to blitz before moving back: 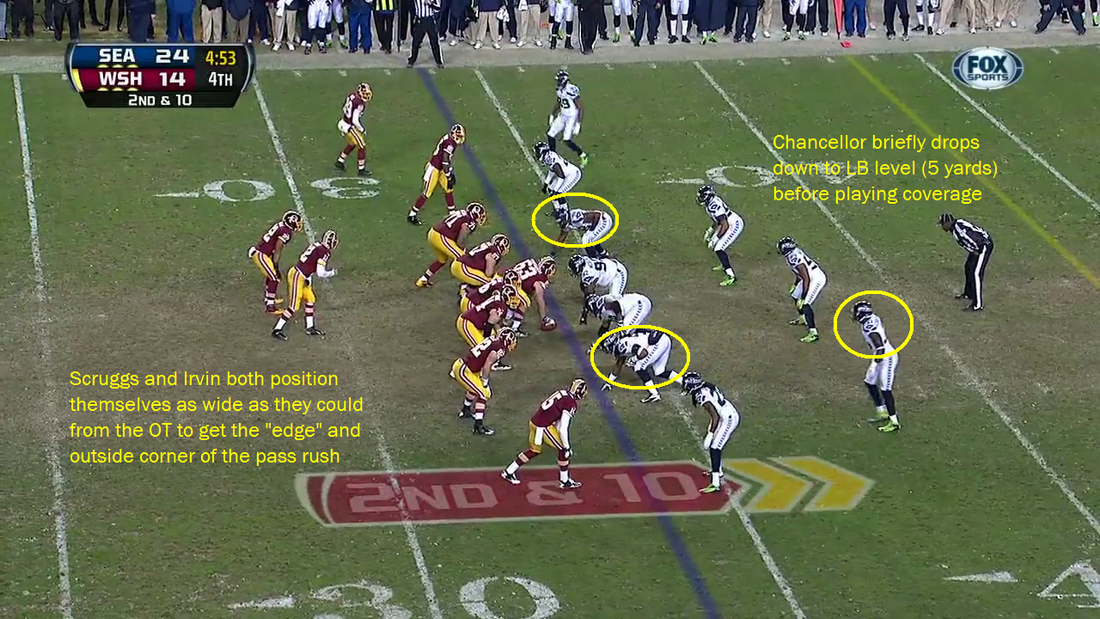 While both Irvin and Scruggs gain movement towards the outside in playing the pocket, the duo of Bryant and Mebane does provide enough interior pressure; Cousins calmly throws to Hankerson for another first down.

Given another chance to mix and match players, the Seahawks again send out another array of personnel on the line. This time, Alan Branch subs in for Mebane and lines up at DT alongside Bryant again. Branch's positioning at the strongside (left) guard also signifies the 4-3 over the front-7 are running for this play. What's even more curious is Bryant lining not at 1-tech weak on the center but 1-tech strong on the center, making this play design a 4-3 over, overload strong side. 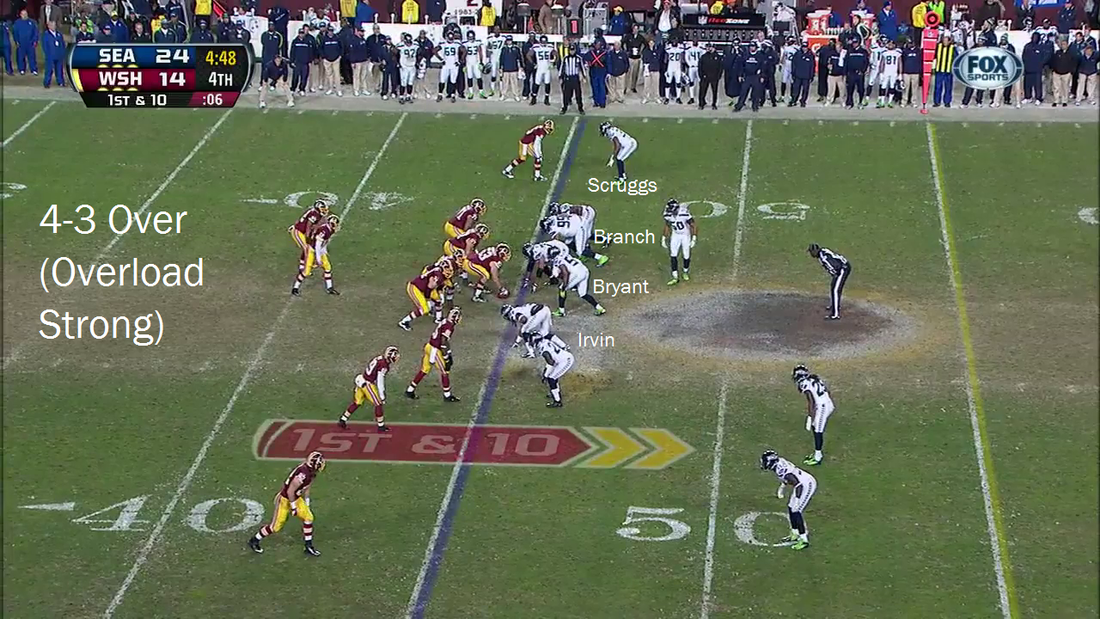 You can see that the defense compensates for the overloading by bringing Bobby Wagner down to blitz. at the other 1-tech spot on the line. K.J Wright also comes down late as the Seahawks rush six players. Irvin and Wagner on the other side also throw a minor stunt, with Irvin coming inside and Wagner moving out. This leads to some minor confusion that leaves Wright with an easy pass rushing lane. 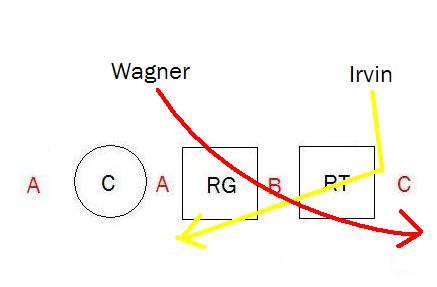 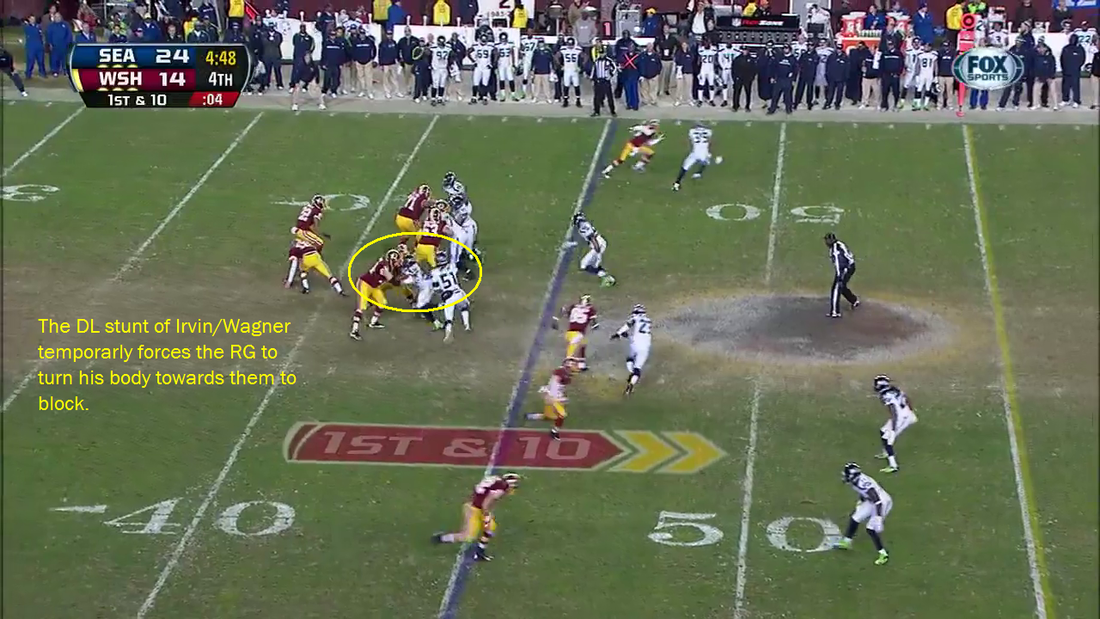 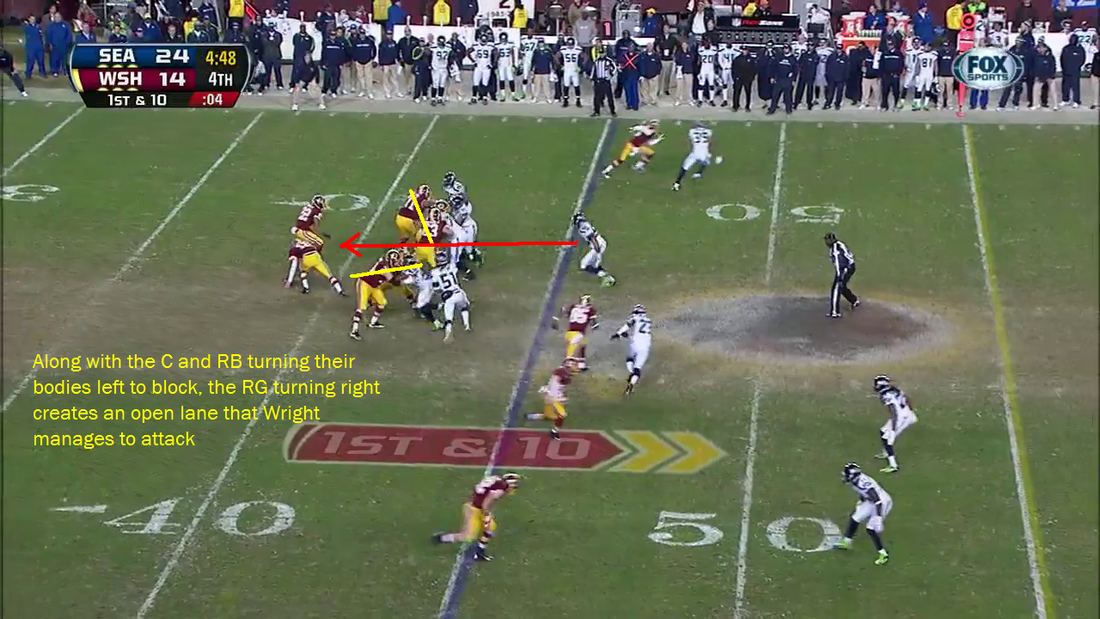 Montgomery has a bad snap for the second time again and the Redskins stall again.

In a rare occurrence, the Seahawks changed personnel again as Cousins and the Redskins struggle to run the huddle quickly and effectively. Branch, Mebane and Bryant come out for three other DBs. We see our first glimpse of the 3-4 elements many people have noted throughout the Seahawks scheme philosophy. Keep in mind this isn't a true 3-4; this is more of a dime (6 DB's) package designed to be a 3-4, something Pete installed previously as the "Bandit": 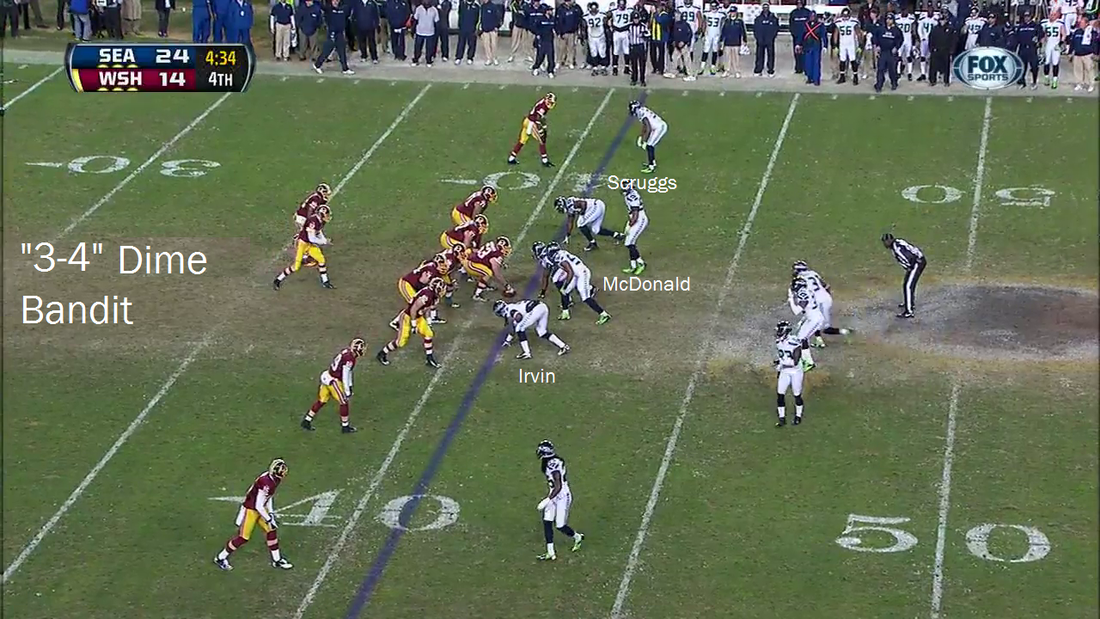 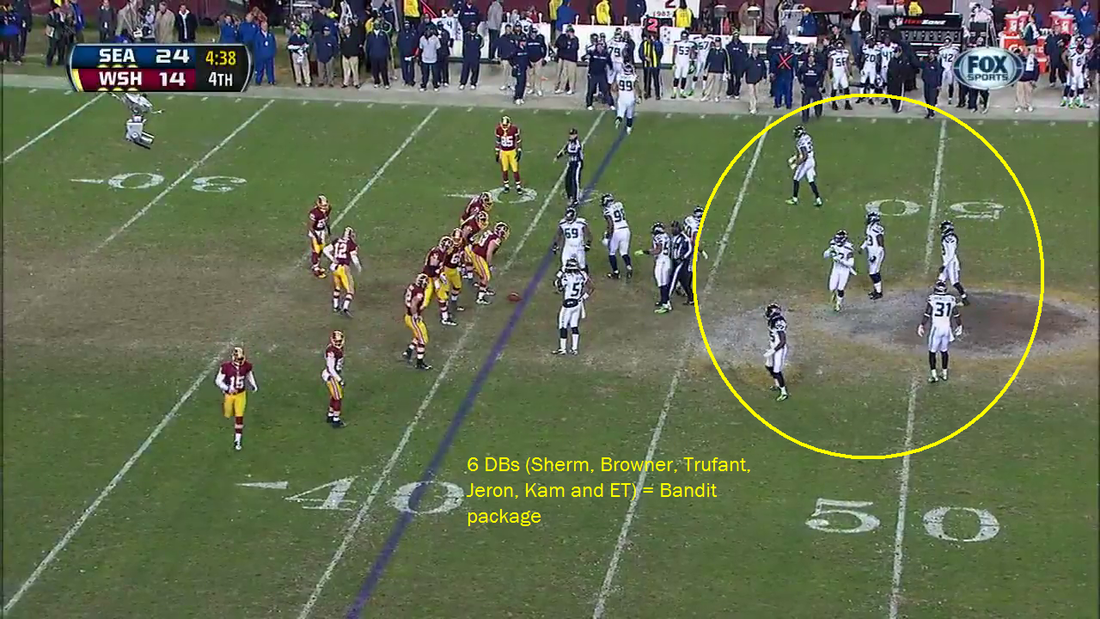 While having 6 DBs may be an indication of playing coverage, Pete's investment in talented and athletic players also allows him to disguise different blitzes and pressures. In this play here, both Wagner and Wright again come along with the three D-Linemen, followed by a delayed blitz on the safety: 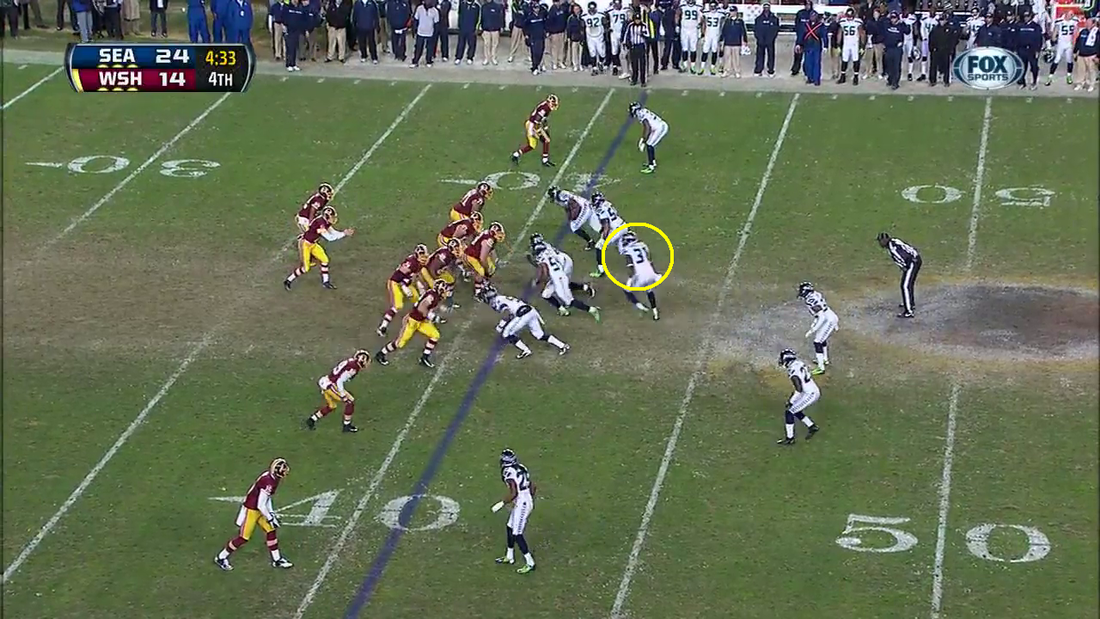 Despite given another chance to switch out players, the defense continues to stay at the Bandit personnel. The Redskins line up in a bunch formation, giving the Seahawks another chance to wreck havoc and creativity. 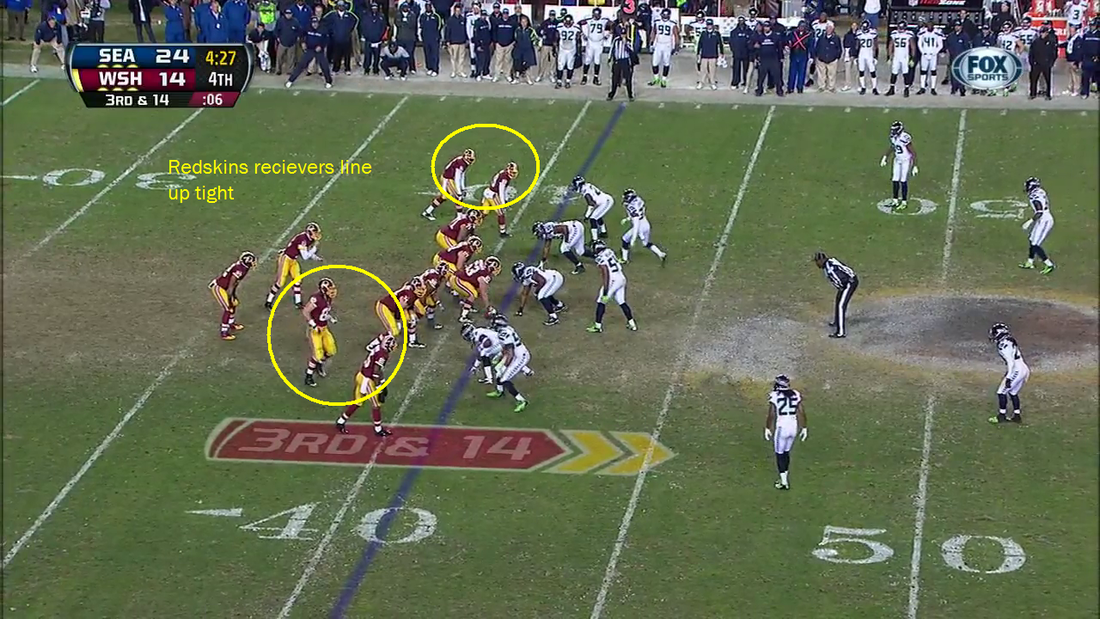 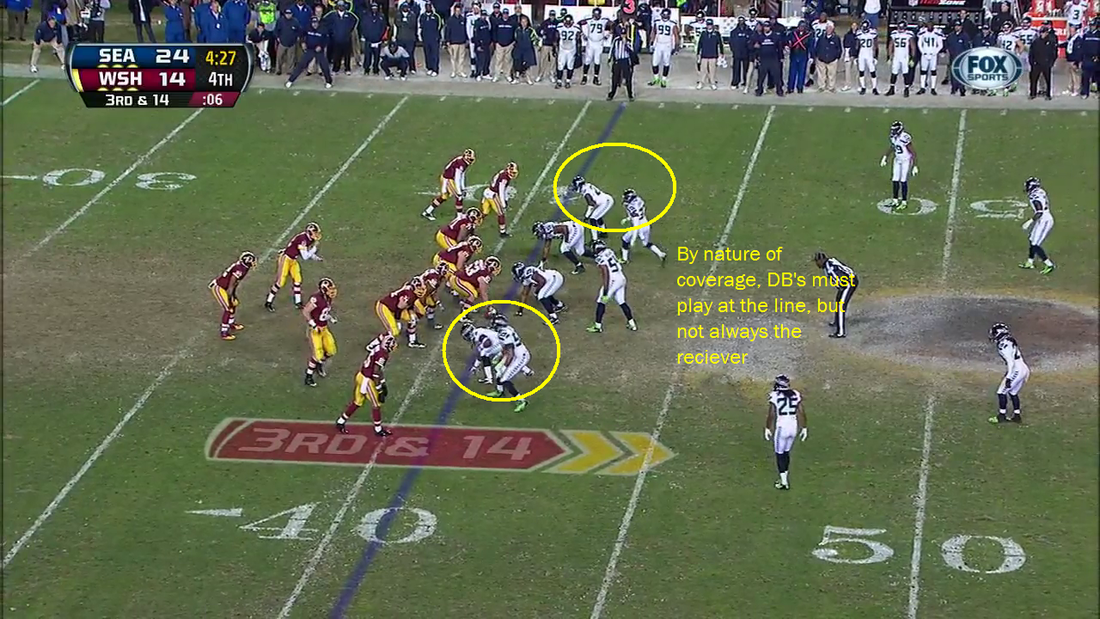 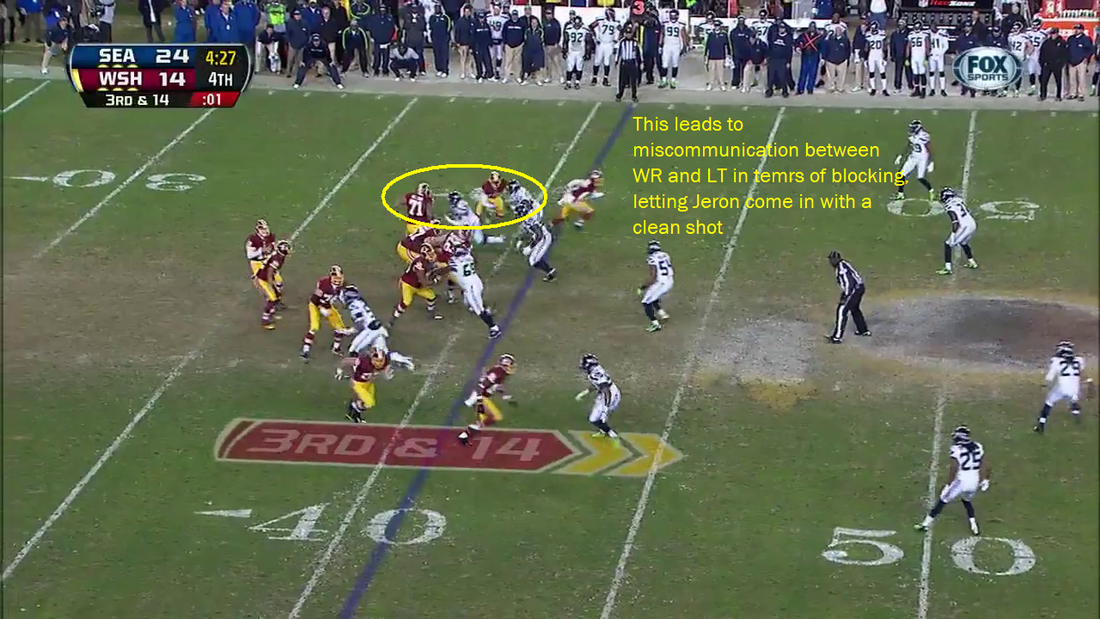 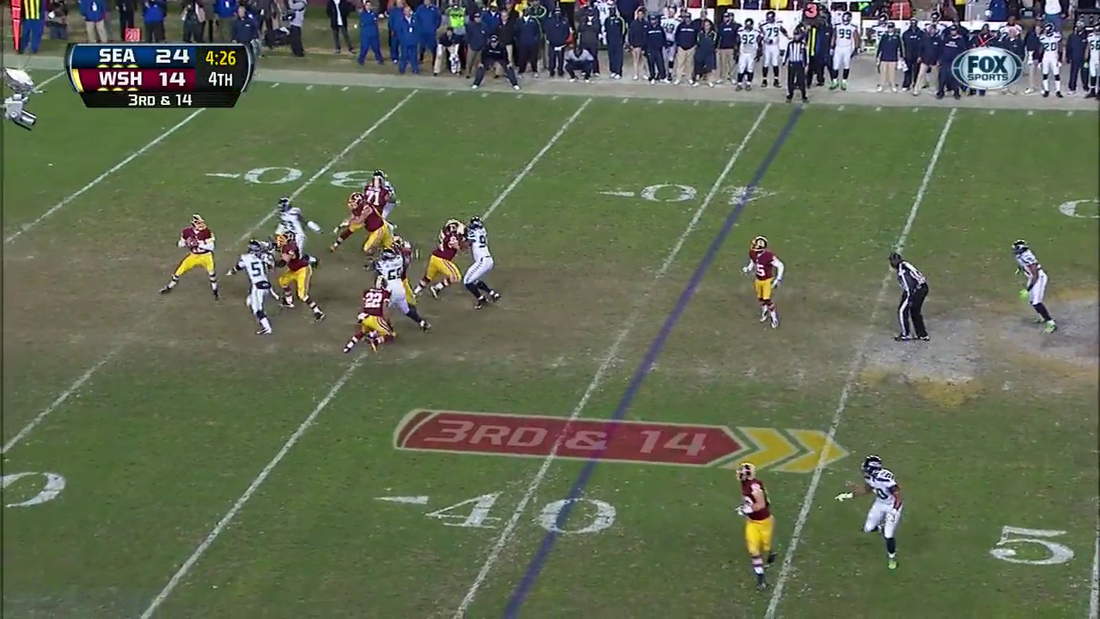