Russell Wilson heads to the Pro Bowl; a quick breakdown of the 'hot route'

As trivial as this might be, Russell Wilson can now say his 2012 rookie season was a Pro Bowl campaign.

Share All sharing options for: Russell Wilson heads to the Pro Bowl; a quick breakdown of the 'hot route'

Russell Wilson has been added to the NFC Pro Bowl roster and will play in Honolulu this weekend. Wilson gets the chance to head to Hawaii to hang with teammates Russell Okung, Max Unger, Earl Thomas, Marshawn Lynch and Leon Washington as a 3rd QB alternate after Matt Ryan, Robert Griffin, and Aaron Rodgers were scratched due to injuries.

Look, the Pro Bowl is a joke, I've never watched it, and it will probably be abolished soon, but nonetheless, it's a cool deal for Wilson; generally speaking the rosters are littered with the best players in the NFL, and it becomes a good excuse to go to the tropics and hang out with Wilson's idol in Drew Brees. Maybe take some notes on footwork and how to win the Super Bowl and all that stuff. If I'm Russell, I'm just following Drew around all weekend like a puppy.

Anyway, it's always fun to go back and watch some of the ways in which Wilson even put himself in the position to be named a Pro Bowler this year, and one thing that stood out to me from the Atlanta game was Wilson's ability to recognize a blitz and hit his outlet receiver decisively. With rookies (and veterans too, course), an ability to see a blitz and get rid of the football quickly is an impressive (and invaluable) skill. Wilson still holds on to the ball too long at times and instead of throwing the ball away he'll try and make things happen and take a sack at others, but he's also shown glimpses of that Tom Brady/Peyton Manning ability to get the ball to the open man quickly to avoid a rush and beat the blitz.

In a couple of cases in that Atlanta loss, that hot route was Zach Miller, so let's take a look at the schematics of what happened.

Now, I know that people seem to loathe the empty set looks that Seattle will roll out on third downs, or any down perhaps, but in this particular game, Seattle utilized it on 1st and 2nd down with some success. I know people like to at least have the threat of a run by putting a running back in the backfield, but there are a number of logical reasons to use the empty shotgun set.

First of all, by spreading things out and giving Wilson five legitimate passing options, it makes reads more simple for a rookie quarterback. Second, it spreads the defense out, stressing zones with multiple receivers, and a greater amount of route combinations makes it more difficult for over-the-top safeties to anticipate where the ball is going.

Think of it this way: on this particular down, Seattle is not yet to midfield, has a 1st and 10, and trots their '11' personnel onto the field. Because of this '11' personnel grouping (one tight end, one running back and three wide receivers), Atlanta brings their nickel package onto the field, swapping out one of their linebackers for a nickel cornerback. This allows them to better cover that third receiver, instead of counting on an OLB to try and run with Golden Tate in coverage, for instance.

Now, coming out of the huddle, Seattle motions Robert Turbin to the far right wing - and the cool part about this is that Turbin is actually a pretty decent receiver in his own right, so i's something that you have to respect if you're Atlanta. The Falcons tend to run a cover-2 or cover-4 zone shell, so they leave their corner on Turbin's side on the outside, and Sidney Rice draws coverage from veteran LB Stephen Nicklaus. Some teams would roll Nicklaus all the way to the wing to mark up with Turbin, but in this case, getting Rice on Nicklaus is a huge mismatch.

So, when you motion your running back out to the wing prior to the snap, it requires a defensive response or adjustment that can tell you a lot about what they're running; in this case, Nicklaus, after looking around confusedly for a while, settles on Rice in the slot, and this tells Wilson that it's almost certainly a zone look over the top with the corners covering the flats. If they were in man, you'd probably see the corner to Rice's side inside on Rice.

For Atlanta, DE John Abraham and LB Sean Weatherspoon are overloaded to the strong side (defense left), with Weatherspoon creeping up to the line and giving away his blitz a little early, so Wilson knows just before getting the ball that he may have to throw hot. 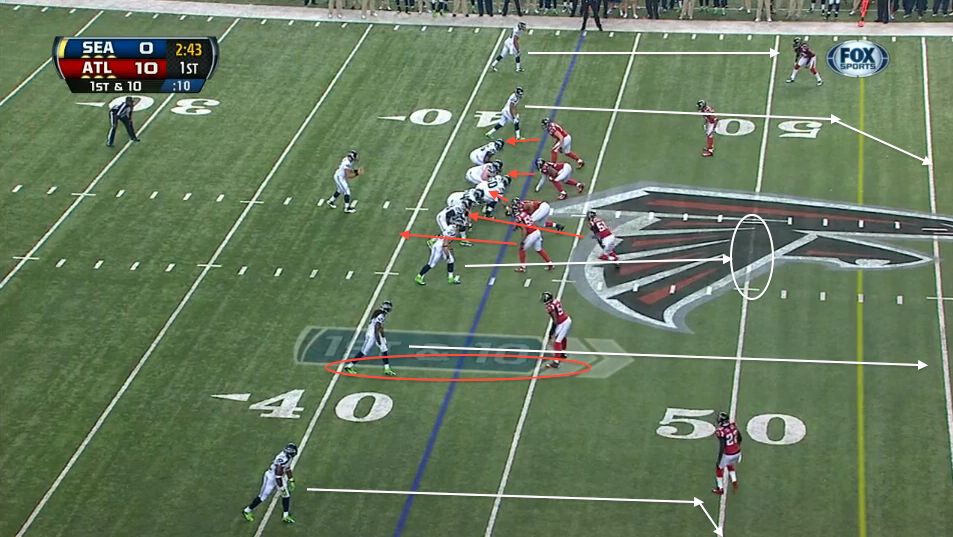 As the ball is snapped, RT Breno Giacomini picks up the blitzing LB Weatherspoon on the inside (slide protection left) and that leaves Abraham unblocked and with a free line to Wilson. Miller, of course, recognizes the blitz and alters his route, instead looking back immediately while crossing the LOS (normal routes would have Miller run any number of steps downfield before turning and looking for the football).

Because Nicklaus is in man coverage on Rice, his back is turned to Miller, so that leaves just the strong-side safety in coverage. That safety has to mind Rice's route though, with that mismatch in mind. We could debate whether Rice might've been an option over the top, but keep in mind Abraham is coming unblocked so all this happens in about one second. Wilson throws to his hot receiver in Miller and picks up 8 quick yards. 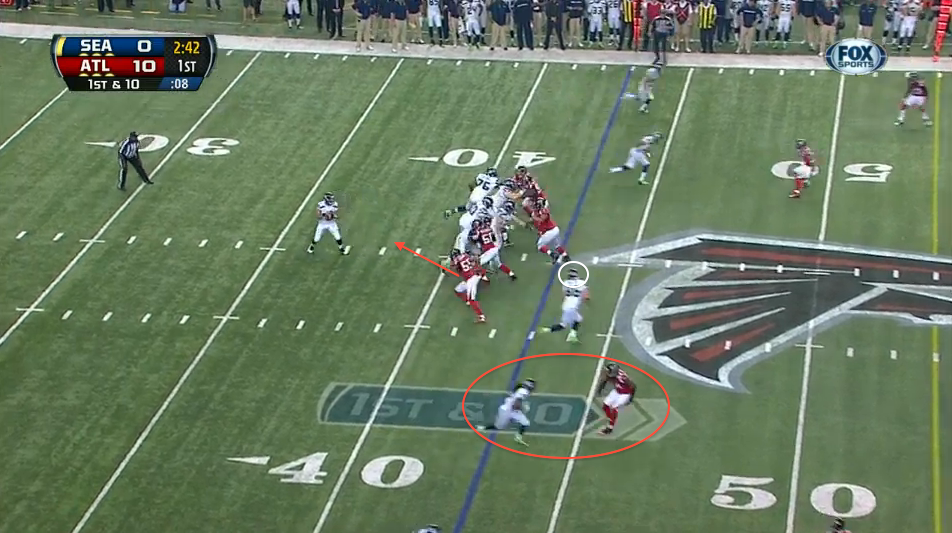 Below, you can see the coverage. The free safety rotates up at the snap to play center field but the strong safety is late in coming down to mark Miller. He probably has Rice in the back of his mind, as does the corner to that side- you can see him cheating a bit to bracket Rice's release.

Had the Falcons chosen not to blitz in this look, Wilson would have had some options in the face of a four-man rush - Miller up the seam, if the safety to his side had minded Rice; Rice down the numbers if the safety had minded Miller, or Turbin on the comeback, for instance. 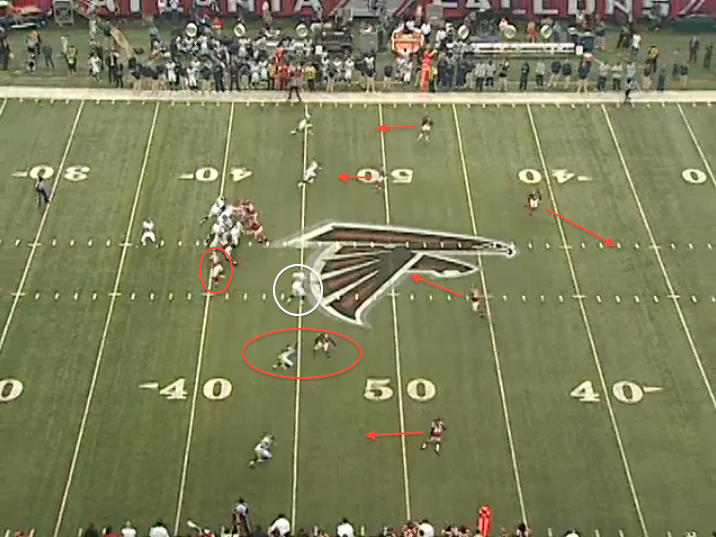 With the Hawks in 2nd and 18 and '11' personnel, the Falcons are obviously thinking a pass is coming here. Falcons respond with their dime personnel - 6 DBs, 1 LB, four DL. Marshawn Lynch, out of the huddle, heads to the wing, Jermaine Kearse wide slot right, with Zach Miller tight slot right. On the left, Doug Baldwin is outside, and Golden Tate is in the slot.

The great part about spreading things out like this is that it creates confusion for the defense. With Lynch outside, a nickelback or linebacker becomes responsible for Kearse in the slot; and often times this type of thing forces the defense to change up their call. In this case, the Falcons are barking out changes and running around confused even up to Wilson's first leg lift (the snap count was two, because they re-assessed things after the first leg lift). As Wilson looked to assess any defensive movement, LB Sean Weatherspoon, who started out on the defensive right, motioned to the left, and bumped the DB to the left side out onto the slot on Kearse. Even if the Falcons end up matched up where they want to be, a thinking defense is a slow-reacting defense.

Prior to Wilson actually getting the snap, the Falcons trot their free safety down into the box as a spy for Wilson, probably thinking the Hawks would send guys deep and Wilson would look to make something happen with his legs. 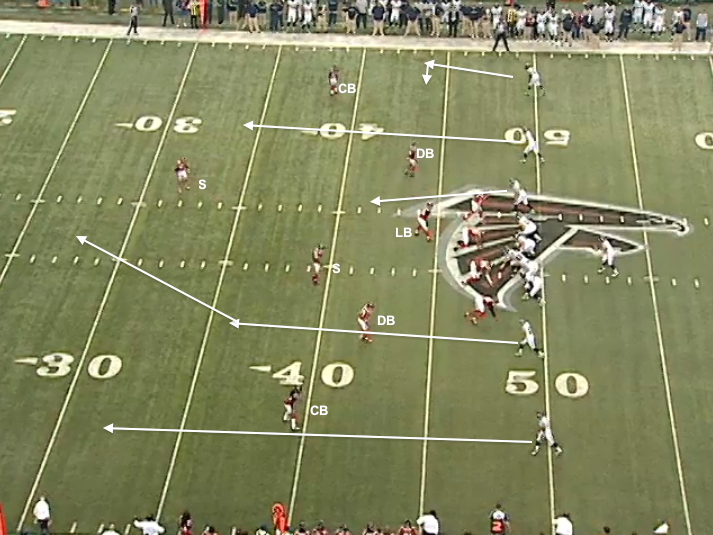 Defensively, the Falcons stay aggressive, and #56, Sean Weatherspoon, over to the left after starting on the right, will blitz. 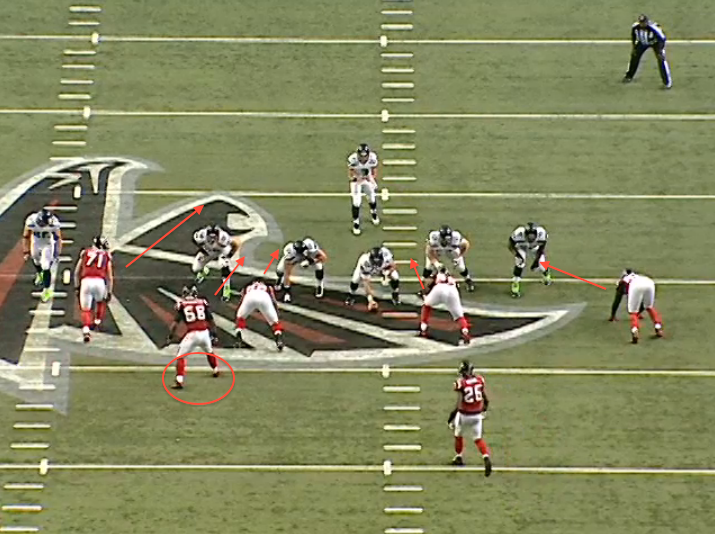 Kroy Bierman, the DE to the strong side, actually gets a jump on the snap and is past Giacomini before Wilson gets the ball. It goes unflagged. Regardless, against this look, Breno again leaves the defender to the outside unblocked and focuses on the interior pressure. Every one of Atlanta's defenders has their eyes in the backfield. 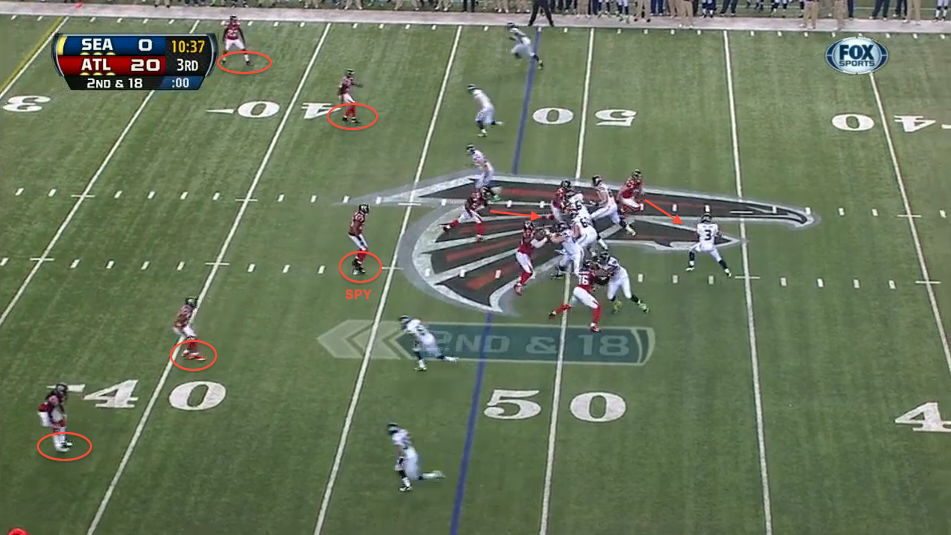 Zach Miller sight-adjusts his route, knowing a blitz is coming at Wilson via Weatherspoon, and looks for the football. 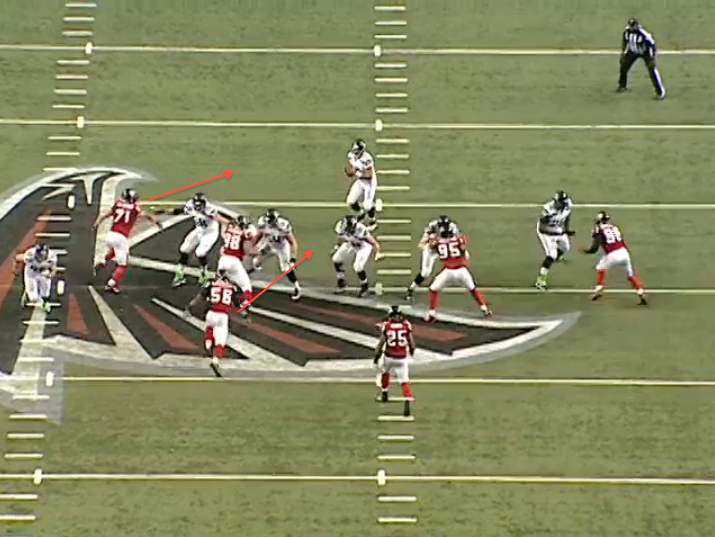 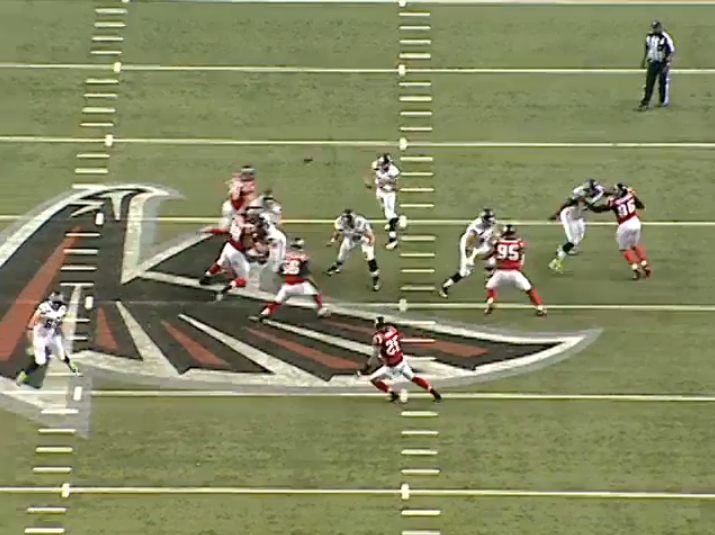 Wilson slings it to him quickly, and S (spy) William Moore is slow to react. Miller rumbles for 19 yards and a first down. 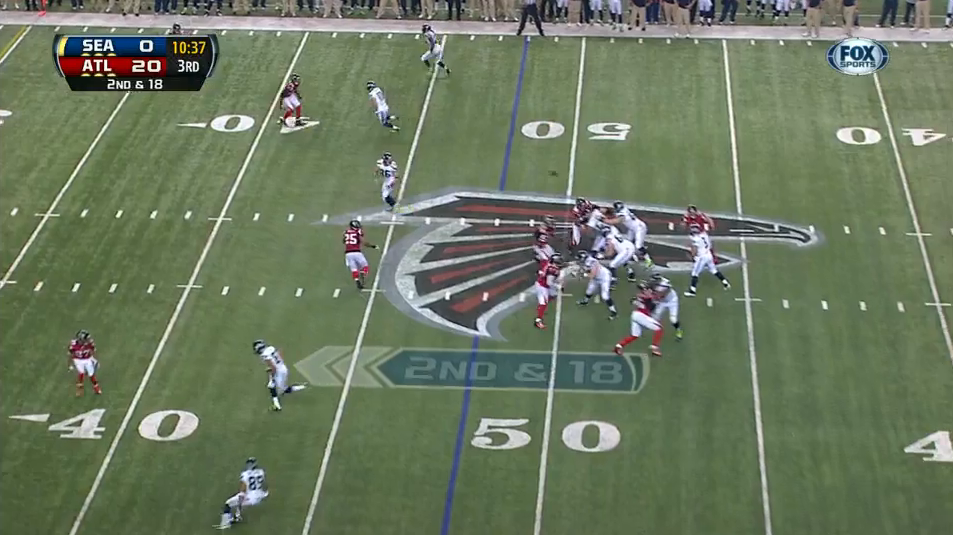 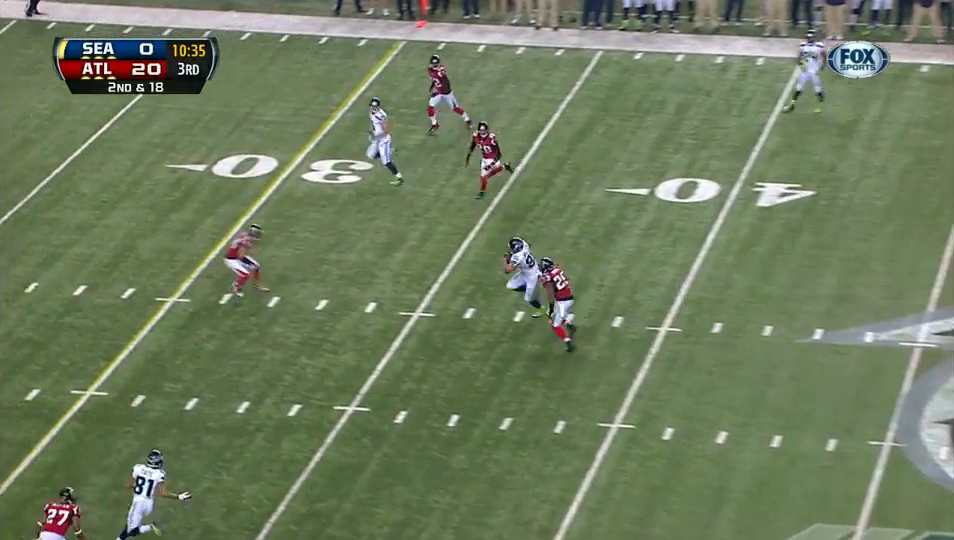 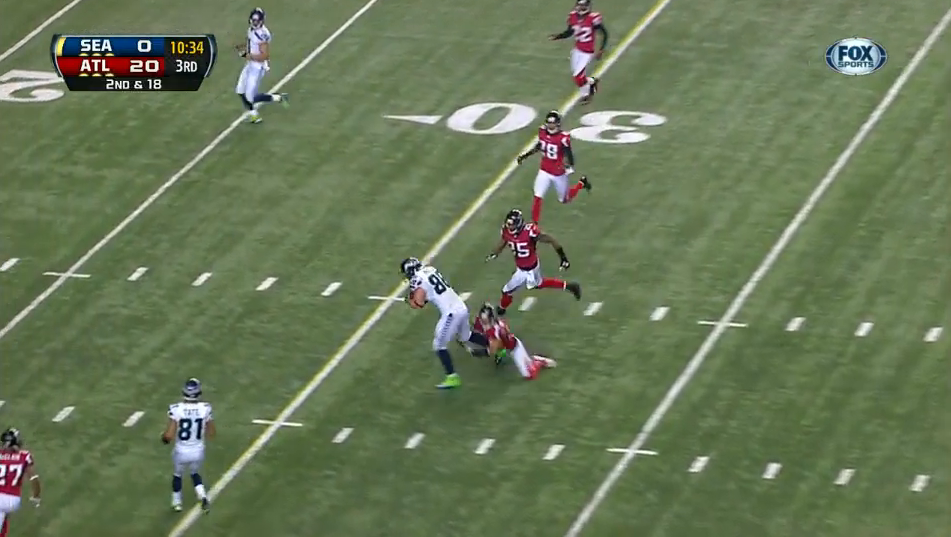