This Week in Defense: NFC Divisional Round, Seahawks at Atlanta

Share All sharing options for: This Week in Defense: NFC Divisional Round, Seahawks at Atlanta

After this last season, I have the feeling that my historical pieces are wearing a bit thin. There really are only so many times that you can take on the 1980's and 2005 before fans have heard it all before. Over the last three weeks I have been debating bringing in a new piece for discussion. A little over two years ago on a Seahawks sports forum, I began to post a weekly breakdown of the defense. I thought I'd bring that here. This piece highlights ten plays from the Atlanta game and gives an info blurb on the play. Time stamps would be provided for those with the benefit of DVR or NFL Game Rewind and wish to follow along.

Disclaimer: These types or articles would be open to interpretation because none of us knows the play calls, of course. These are done with best-guess, based on the facts we can track, personnel, result, etc. Nothing I would post would be definitive and therefore could be open for debate, discussion. Please feel free to ask questions about any highlighted or not highlighted play and debate is also welcome in the comments.

[1st Qtr 14:50 2nd and 10] The Seahawks allow a power run right up the gut and the trouble begins. This play illustrates the problems later in the year with both Alan Branch and Red Bryant eventually getting pancaked to the turf after allowing Turner to run past them. Atlanta is probably the best o-line in football, but this is really disappointing to see the bigs getting blown off the football two weeks in a row. 12 yard gain for Turner. 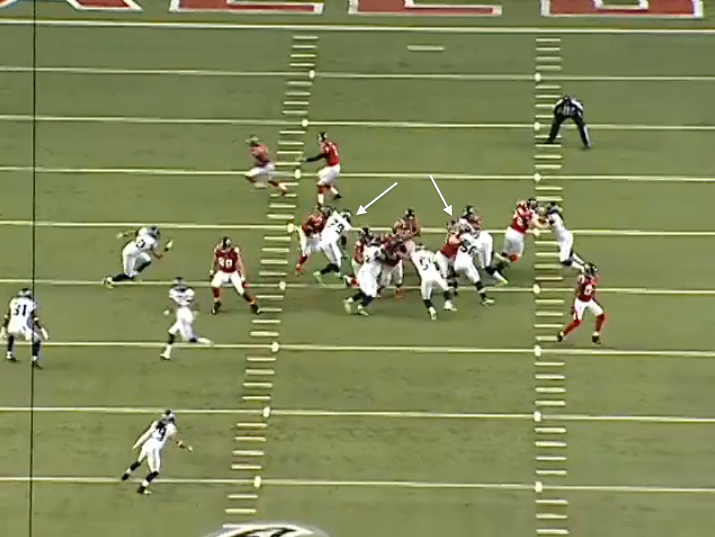 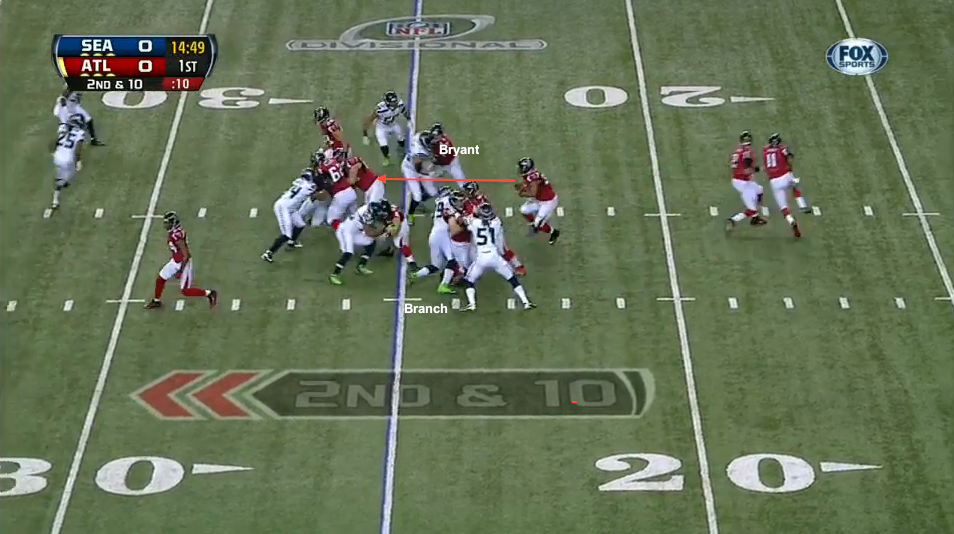 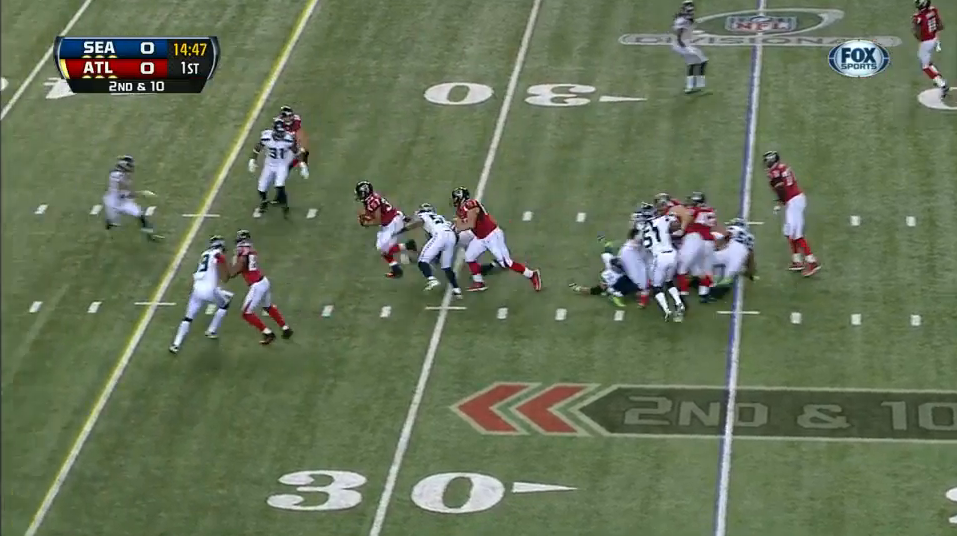 [1st Qtr 10:36 2nd 5] I had to highlight this play because Greg Scruggs has been a guy I have keyed on. Though he hasn't produced pressure as much as one would like from the 3-tech and 5-tech spots this year, this play does illustrate why he made the team. It's an outside run by Alanta and Scruggs, who is unblocked on the backside of the play, tracks the back down, and takes a fantastic angle to combine on the stop for a two yard run for the Falcons. I realize it seems trivial, but after watching Aaron Curry for two seasons it really makes you appreciate a good fundamental football play.

[1st Qtr 7:12 3rd and 3] Bobby Wagner's interception: the blitz has been hit or miss all year for the Seahawks, which has been a bit frustrating for me. I have documented and charted a good deal of success the previous two years, but it seems with all the newer 3rd down parts this team lacks the discipline to make blitzes consistently work. In this case however, a simple overload works, Ryan throws in a rush, and Wagner comes away with an easy pick.

It's a nice outside angle by the first man through, Winston Guy, that provides the lane for Trufant on the play as Jaquizz Rodgers picks him up, and Bruce Irvin's quick dip inside turns the tackle away from the outside pressure - otherwise Atlanta could've blocked it up easily. 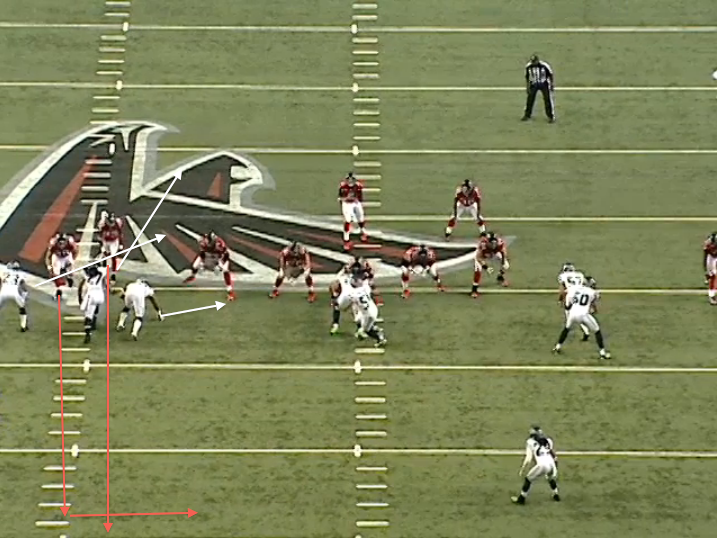 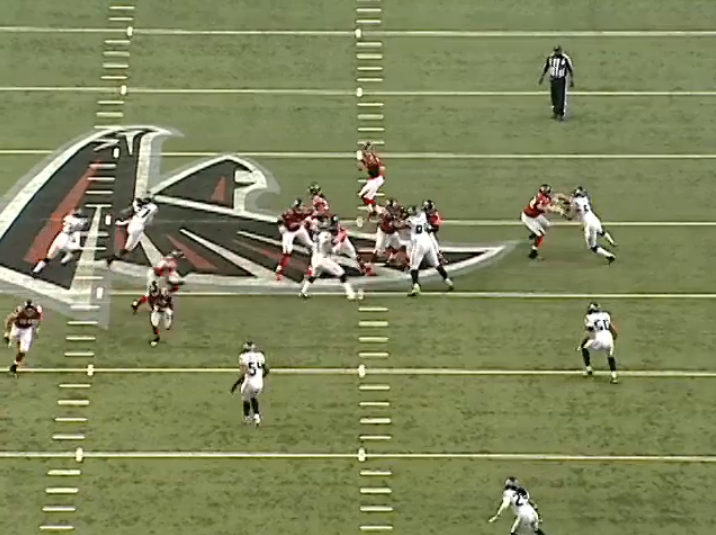 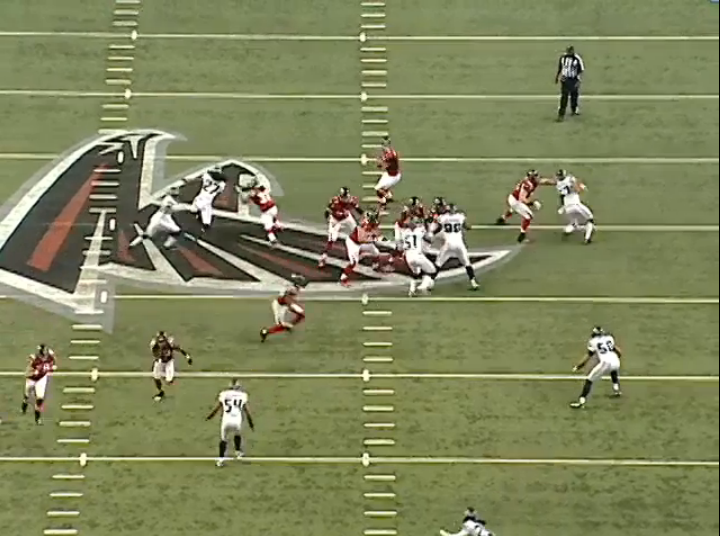 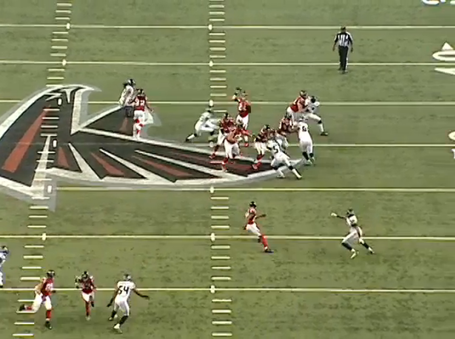 {2nd Qtr 9:51 3rd and 7] One of the rare 3rd and long plays of the first half. Atlanta goes with a quick screen and KJ Wright and Brandon Browner play it as if they knew the call. Wright gets off of a Jason Snelling lead block easily, and Browner knifes through and dives to ankle tackle Roddy White. Atlanta loses two, but this play and two others showed just how well the Seahawks had scouted the Falcons' offense. Atlanta is forced to kick a field goal.

[2nd Qtr 4:23 1st and 10] Kill shot, long TD throw to Roddy White. This is entirely avoidable. The Seahawks bring pressure and it's picked up - the pressure is actually pretty cool, because nickelback Marcus Trufant follows WR Harry Douglas across the formation in a man-to-man look, but then blitzes at the snap - Earl Thomas comes down into the box to mark Julio Jones as he runs what looks like a screen-route, and Browner takes Douglas deep.

However, on the backend, Kam Chancellor vacates his deep middle responsibility as he gets caught reading Matt Ryan's eyes. He abandons Sherman for help of Browner on Douglas, but Sherman expects some help to the inside (in fact, Roddy White catches the ball to Browner's side field).

Sherman is beat a bit on the play as White cuts inside at the last moment, but this is Kam Chancellor's fault. As White slow-plays his route, jogging at first, then turning on the jets, Kam's back is completely turned to White. Once Kam sees the ball thrown deep middle, he's too late in reacting. 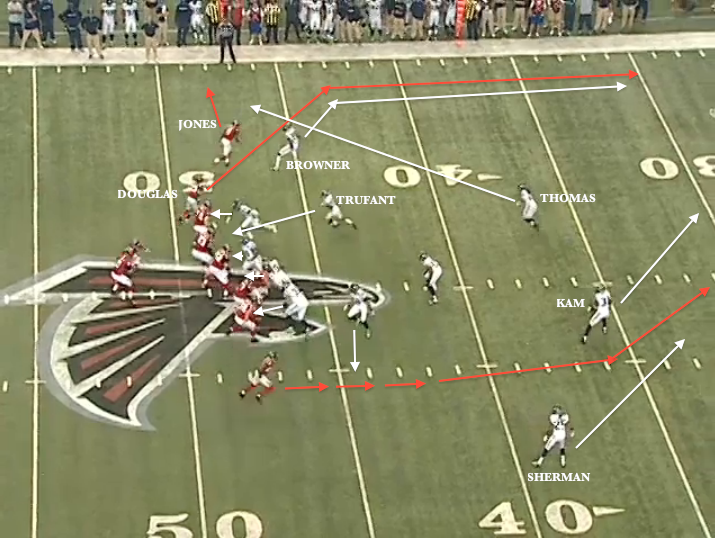 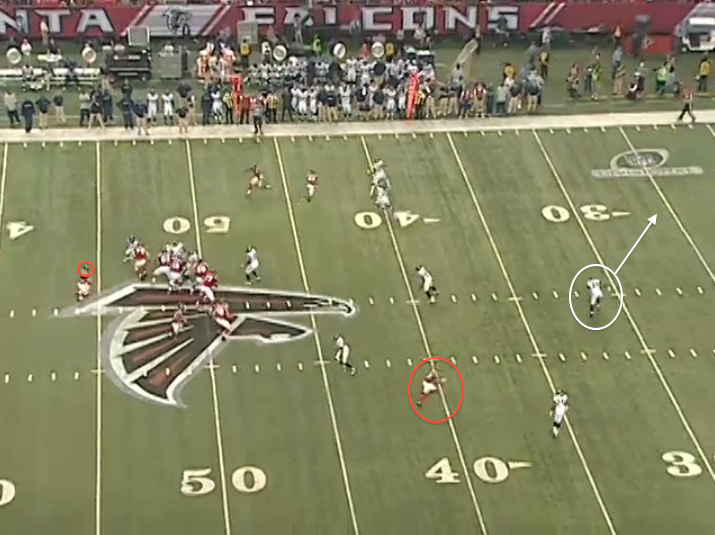 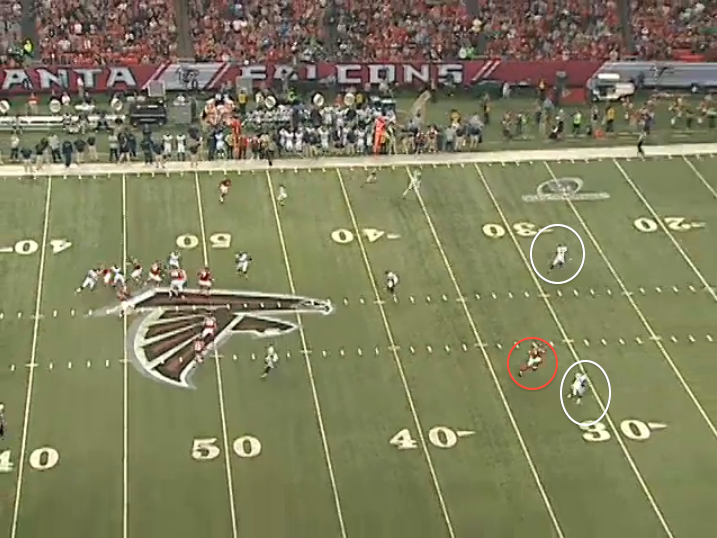 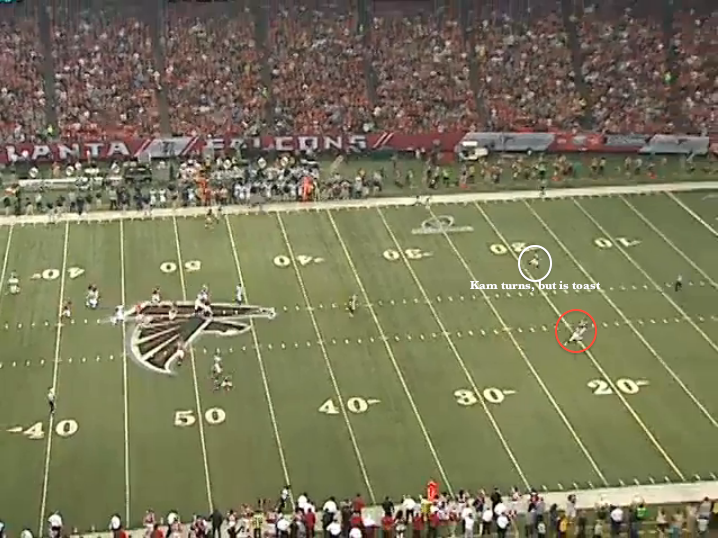 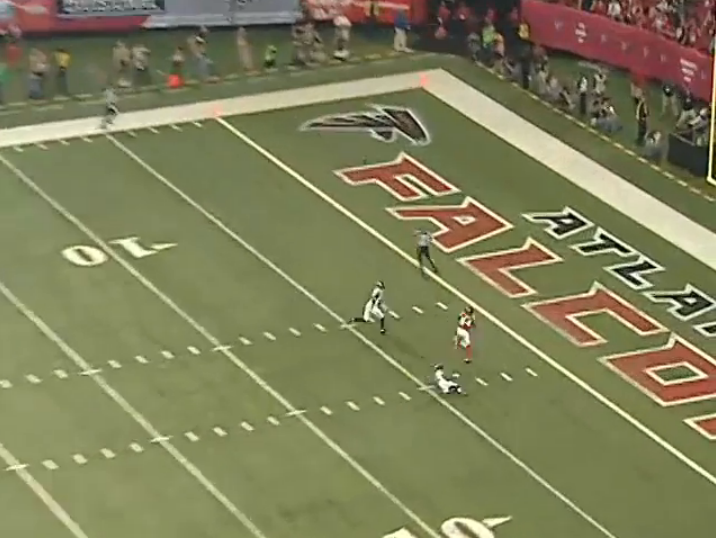 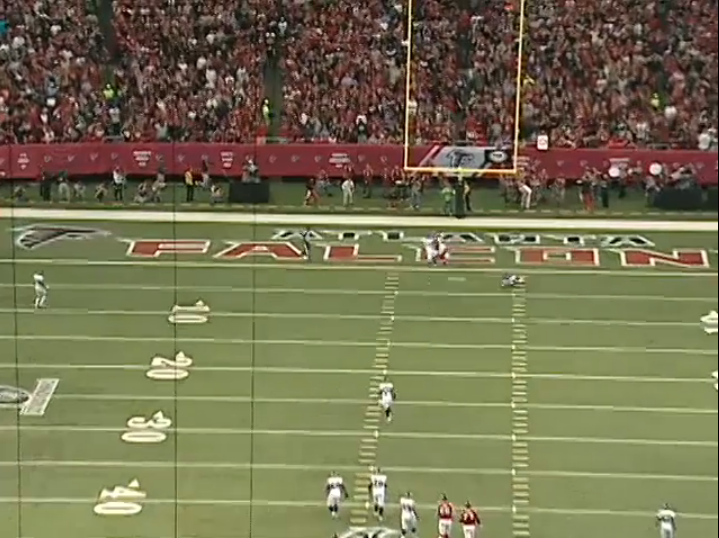 This is the same play, more or less, as the Falcons' first-drive look for White in the endzone, a play that Sherman batted away.

[3rd Qtr 5:43 2nd and 7] Seattle brought a lot of blitzes in this game, and this play was really a microcosm of what was happening on them. The Bobby Wagner B-gap blitz was picked up nicely by the running back, and Ryan makes the easy completion after looking down the field to the left. Lots of frustration, and lots of chaos on these pressures just made it look like more of pile up than a disciplined blitz scheme. 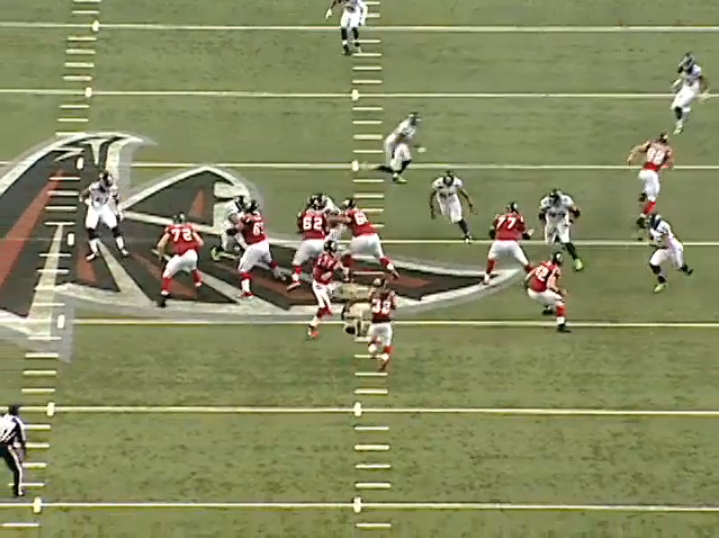 The thing to note on some of these plays is that some blitzes are delayed, or disguised, and watching Wagner on this one - he comes on this call hot, and then sees the RB ready to make a block and stops his momentum to try to go around him. This is a mistake. Once he stops his momentum, he becomes easier to block and his balance is affected; he gets knocked out of the pocket rather easily. It's almost as if he didn't recognize the back was held in as a blocker. This is the difference between a rookie and a veteran player on a play like this.

[3rd Qtr 3:41 3rd and 9] Seattle brings another blitz and again it's picked up. However, I wanted to note this play for the fact that even though it results in a completion, Winston Guy plays this pass to Tony Gonzalez as well as you can and sticks to his coverage beautifully. For a player who didn't even cross my radar in the pre-season, he's interesting as a potential player to add into a slightly bigger role next year, perhaps in nickle situations. I definitely will be on the lookout for this kid next season. He played a very physical game. Ryan gets a bit lucky on the throw as well as he has to turn and fire as Kam Chancellor blasts through and is barely picked up. Sometimes football plays like this are chaos and luck. Matt Ryan chucks the ball up and Tony G bails him out with a fantastic catch.

[4th Qtr 11:52 1st and 10] Atlanta tries an end-around with Julio Jones. KJ Wright diagnoses this before the snap as Jones heads in motion, pursues Jones through the snap and brings him down for a 1-yard loss. It's an impressive play of recognition through completion. Players often will recognize the play post snap, but very few actually notice the motion of the receiver until it's too late to fully react.

[4th Qtr 11:15 2nd and 11] Earl Thomas with an INT. The play really makes no sense from Matt Ryan's perspective. This ball just should not be thrown. Thomas makes a fantastic break on the ball, but Ryan is also staring this target down. Trufant has ideal position trailing, and Thomas can finish the play unimpeded. Matt Ryan is sent back to the bench wondering just what he thought he saw there.

[4th Qtr :25 1st and 10] Harry Douglas with a 22-yard reception. The Seahawks break your heart. For as well as the defense played in the 4th quarter, the details have haunted this team in heartbreakers before. Leroy Hill in Miami, Marcus Trufant in St. Louis and Brandon Browner last year against the Redskins. When you watch this play the details are like this.

In this situation, with 25 seconds remaining, Trufant shouldn't have stopped his back pedal on the short outside zone until the ball comes out. This would force the Falcons to dump underneath to Gonzo at about the 35-yard line, and use up valuable seconds. Instead, for some unknown reason, Trufant jumps the underneath route by Gonzalez, and leaves a huge gap between he and Brandon Browner, who is still back-pedaling, waiting for the ball. This allows the perfect route by Harry Douglas to get tucked in behind Trufant and Browner at the 50, which Bobby Wagner follows but is slow to contest. 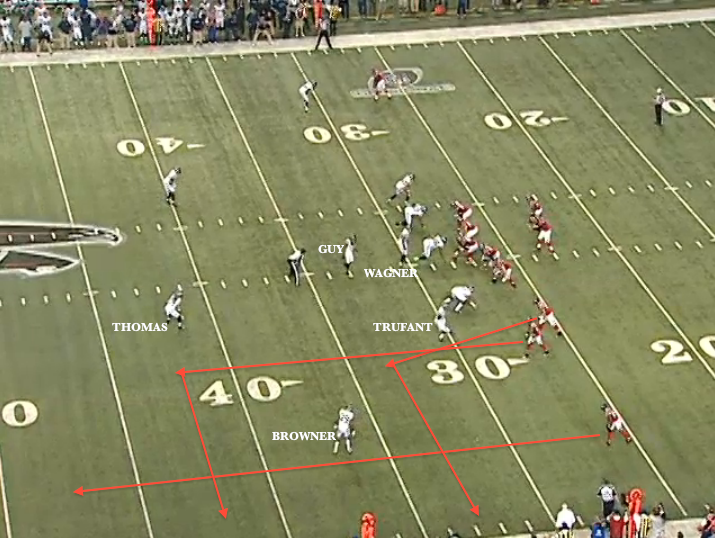 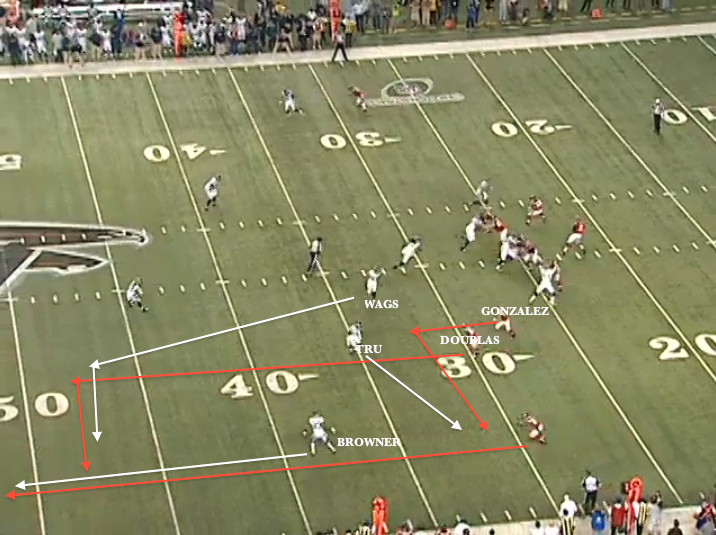 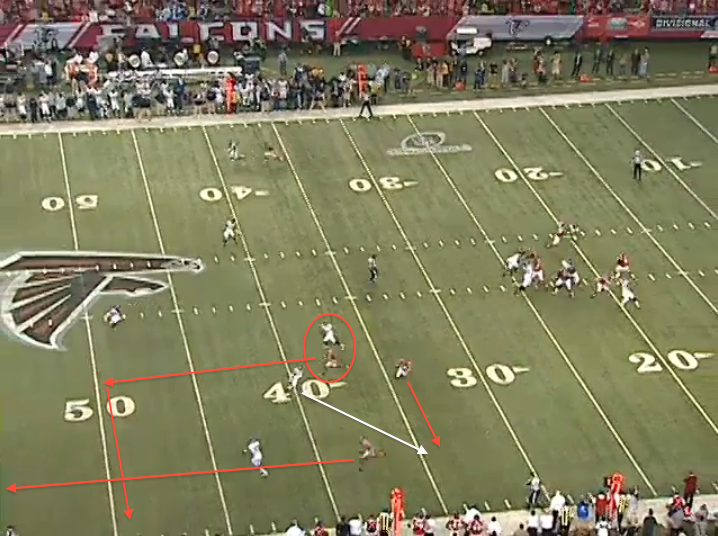 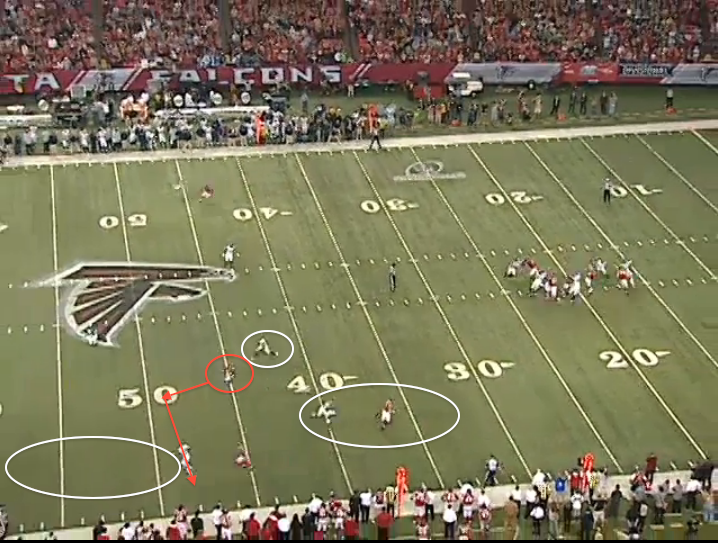 The Seahawks did bring pressure on this play with Guy up the middle, but it had no bearing on the completion and so, your season comes down to the same Achilles heel it has all year, details.

These plays, for me, really best represent the game as it was played. There were a number of blitzes called, but I was amazed at how many I missed during my look-through. I spotted at least 11 blitz calls where five or more defenders were sent in pressure looks. Some were disguised, some delayed and some all-out calls, on all manner of down and distances.

It was clear Gus and Pete felt they needed to pressure and though the results seemed less than meaningful at times, it stopped Atlanta from getting huge plays for most of the game. Match-ups in coverage were well schemed, but again, they were caught off guard by some of the running plays. In fact, the only time I saw the Seahawks in tough match-ups they wound up being mis-aligned against running plays. It was disappointing and really another continuing issue with the front seven vs the run.

I hope it's something that can be fixed this off-season. Injuries or otherwise, Atlanta had far too many 3rd and 3 or less plays in this game and that's not how Pete builds his teams to play.