An alien on the loose: Earl Thomas on the triple A-gap blitz

The Seahawks and the A-gap blitz.

Share All sharing options for: An alien on the loose: Earl Thomas on the triple A-gap blitz

With the loss of DT Jason Jones two weeks ago, it appeared that the team's pass rushing defense will suffer and regress as the Seahawks struggle to compensate for their tenacious playmaker. As I outlined three months ago, interior pressure is the key to a good pass rush and good pass defense in general. Without the disruptive force that Jones has been early in the season, Pete Carroll is forced to find more creative ways to create that pressure. Here's one interesting method he found, and one that might stick for a while...

With a 4-point deficit and the Rams driving late in the first half, the Seahawks are highly motivated to give their offense the ball back on this crucial third down. Despite playing for almost two quarters of football, the team has not been able to come up with a sack on Sam Bradford, and seem to be desperate for some kind of pressure to disrupt his rhythm. Seahawks HC Pete Carroll decides to roll out a variant of a 'fire' all-out blitz here, putting 6 men on the line: 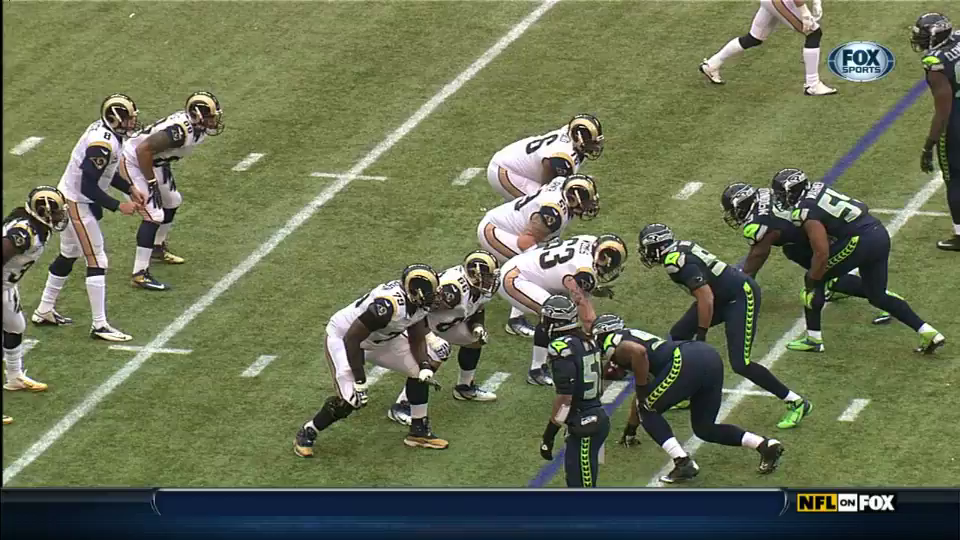 Earl Thomas slowly begins to creep up to the line of scrimmage (LOS). The Rams compensate by motioning the TE to block alongside Steven Jackson. Bradford also quickly points out to oncoming pressure as he notices ET cheating up the line. Currently, the Seahawks have 7 potential rushers to the Rams' 7 blockers. 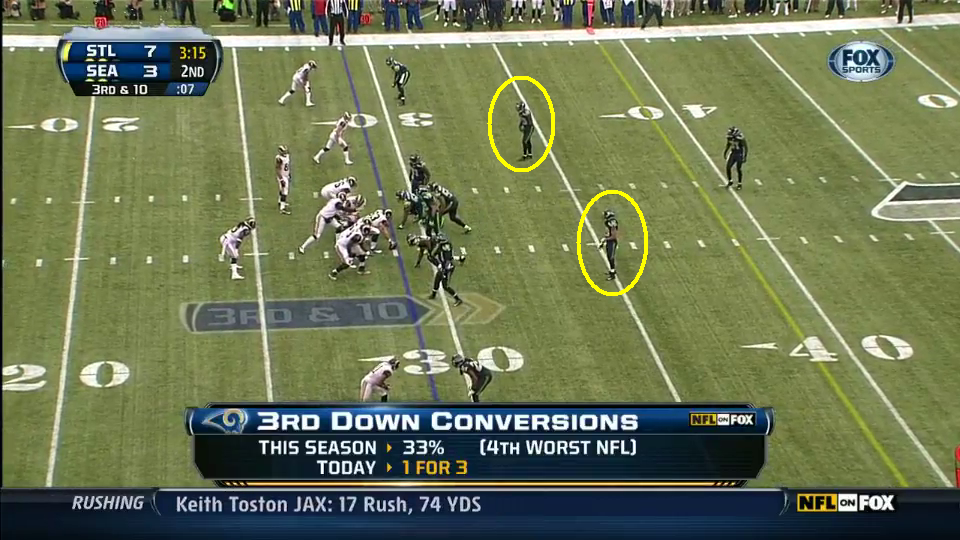 Yet, as is typical, the Seahawks would not rush that many men, because it's not really their habit to risk leaving only 4 defenders in coverage. As designed, the play would actually be drawn up like this: 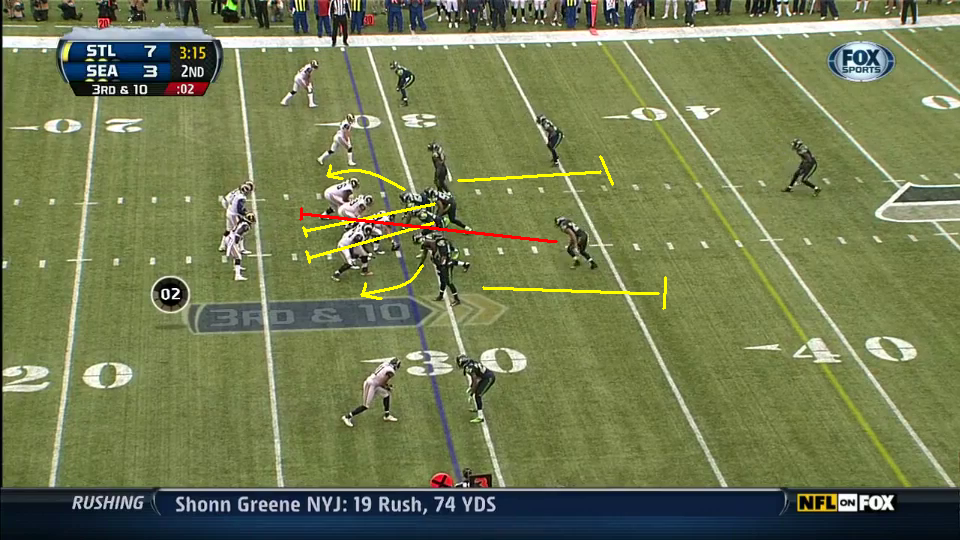 Essentially, Chris Clemons and Bruce Irvin will drop back into the middle and cover where Marcus Trufant and ET are originally positioned. The two other interior lineman - Clinton McDonald and Greg Scruggs - will again slant inside before rushing out for contain. The rest of the group - Bobby Wagner, K.J. Wright and ET - are left to bombard the middle of the protection, almost akin to cracking the wedge on a kick return. In this play design, I think Carroll is looking to lure Bradford and the offense into a false sense of protection that will end up as his downfall later.

Upon the snap, ET gradually accelerates from 3 yards out. By the time Bradford is dropping back, he's past the LOS and about the engage the inside blockers: 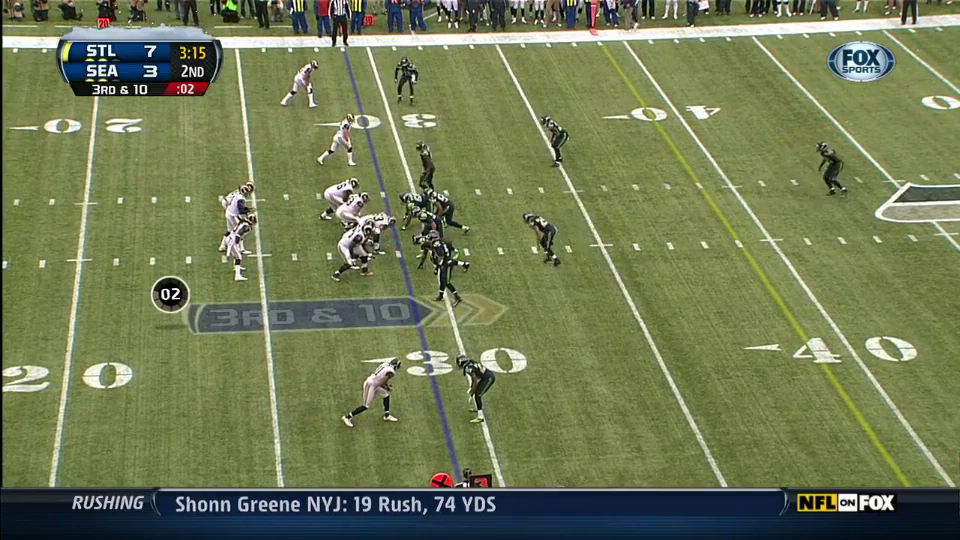 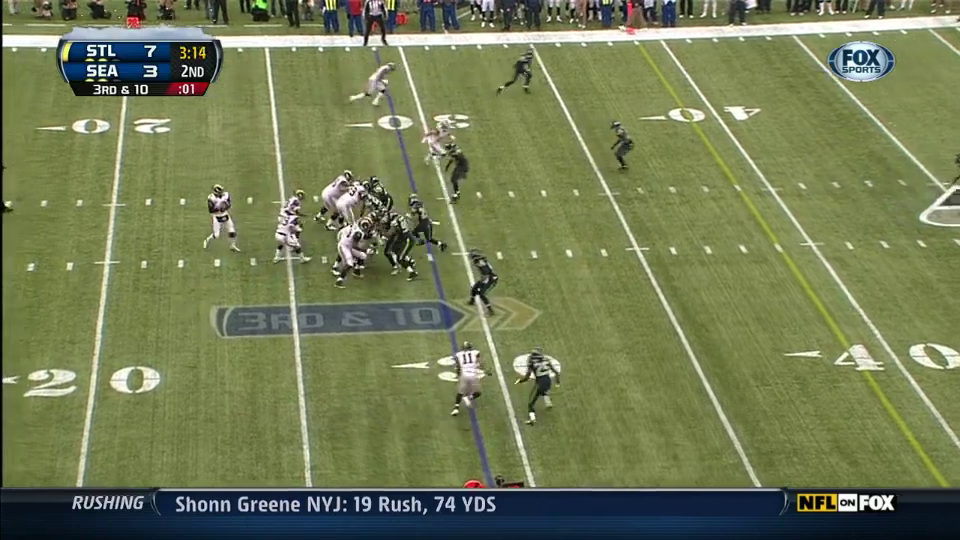 The pass protection for the Rams holds up solidly, but also breaks many fundamentals for an basic offensive pass scheme as well. For example, the two bookend tackles, noting that the DE's have not pass rushed, decide to help block inside and relatively stay put within their positions. The RB and the TE immediately and instinctively step up, also blocking the inside of the pocket. In turn, their protection looks very exploitable despite holding off Seattle's D from any pressure. 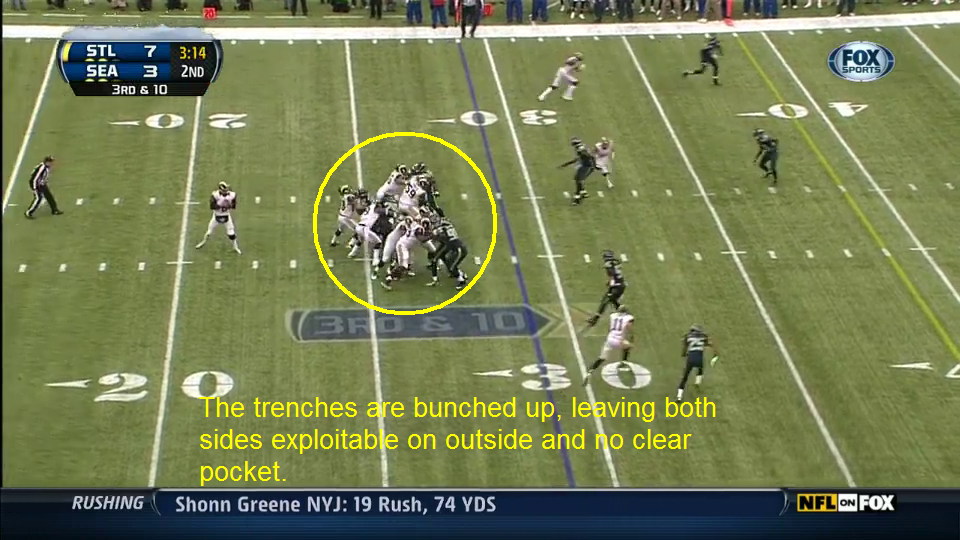 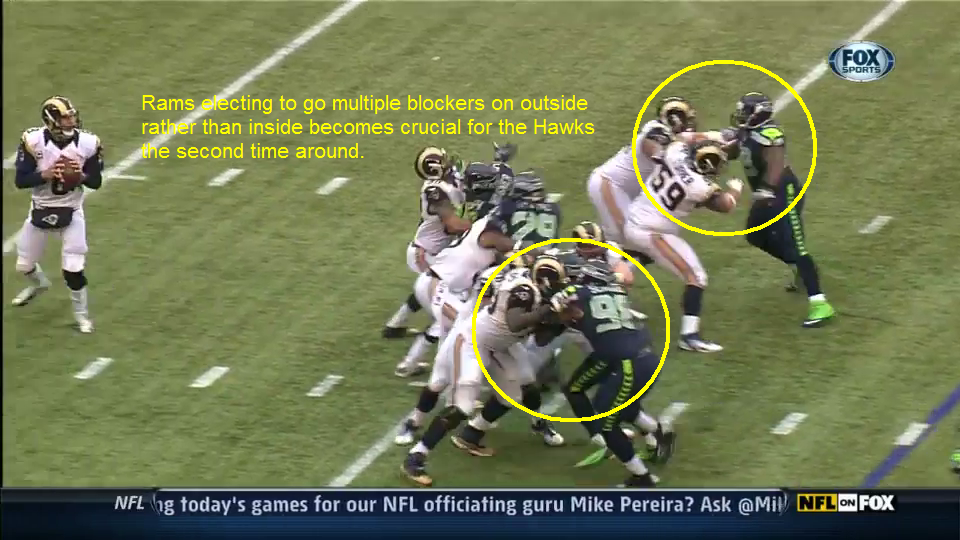 Here's another view of it, through the gap orientation of the defense: 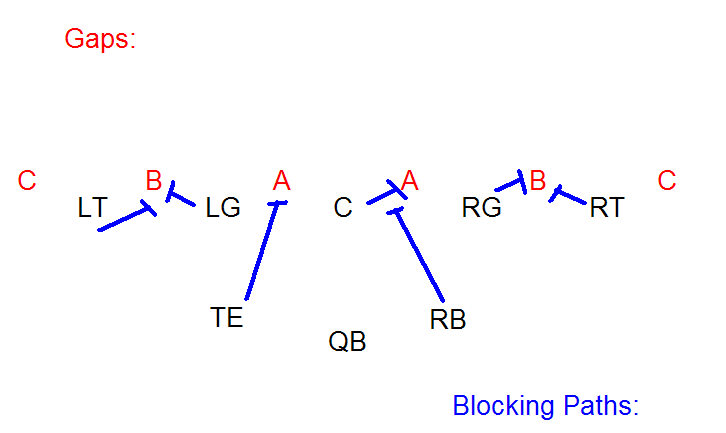 In the end, Bradford is given enough time to throw and misses high to Danny Amendola. Nevertheless, the Seahawks have uncovered a flaw within the offensive line. By warranting enough men to lure inside protection by the Rams, they have also left out the outside. As you can see nearing the end of the play, Scruggs and Wright were both within a second of taking down Bradford for a loss: 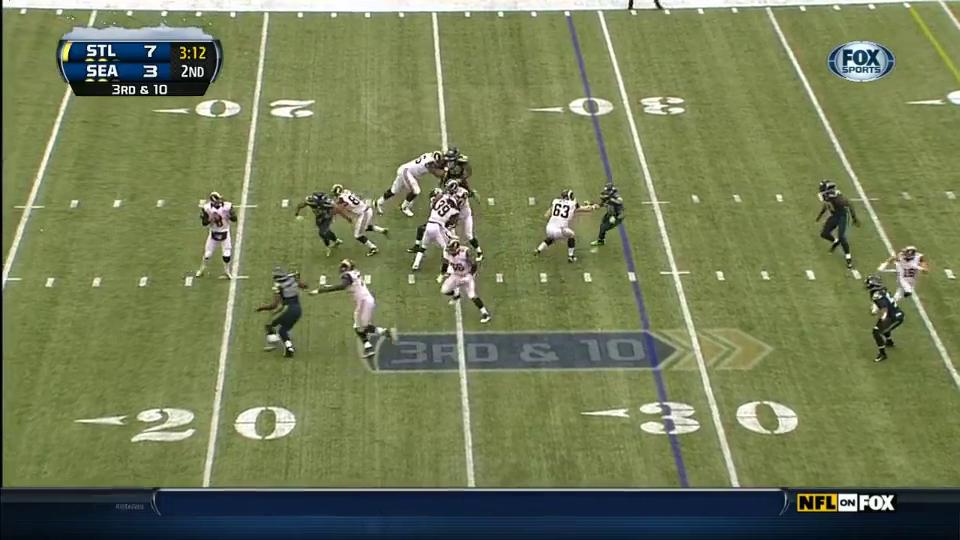 Down by seven and within striking distance of the Seahawks' redzone, the Rams are playing against both the clock and the Seahawks' all out pass rush. The defense lines up in a strikingly similar look to the one they had two quarters ago, again with 6 men on the line, with ET on the right side instead of the left: 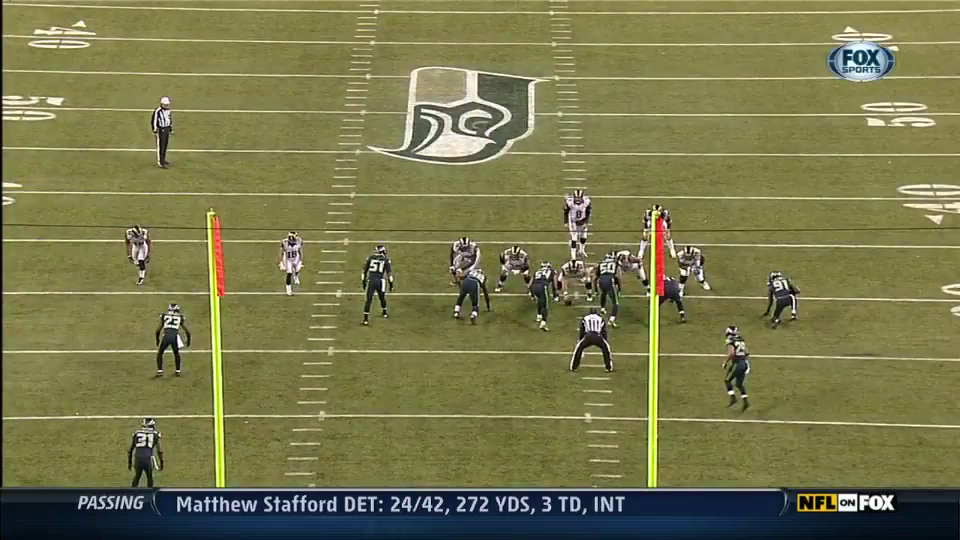 This time, ET disguises his blitz better and does not creep up as much, and simply anticipates the snap count/cadence made by Bradford. The Rams also do not decide to check into max protection, due to a variety of reasons. For instance, the last time the Rams came upon this situation they sacrificed two receivers for an extra blocker, and within two minutes and in a TD-or-bust scenario, it would be unwise to sacrifice potential receivers for a opening/TD route. Add to the fact that the numbers game matchup nearly evenly - the Seahawks are rushing at most 7 men and the Rams have 6 blockers. Judging from the last time they had this blitz the pocket was still adequately protected. It's definitely a reasonable decision here by Bradford.

Nevertheless, it would be a wrong decision. The Seahawks end up rushing the exact same blitz as they did previously, with Irvin/Clemons dropping back and the trio of Wright/Wagner/ET coming inside: 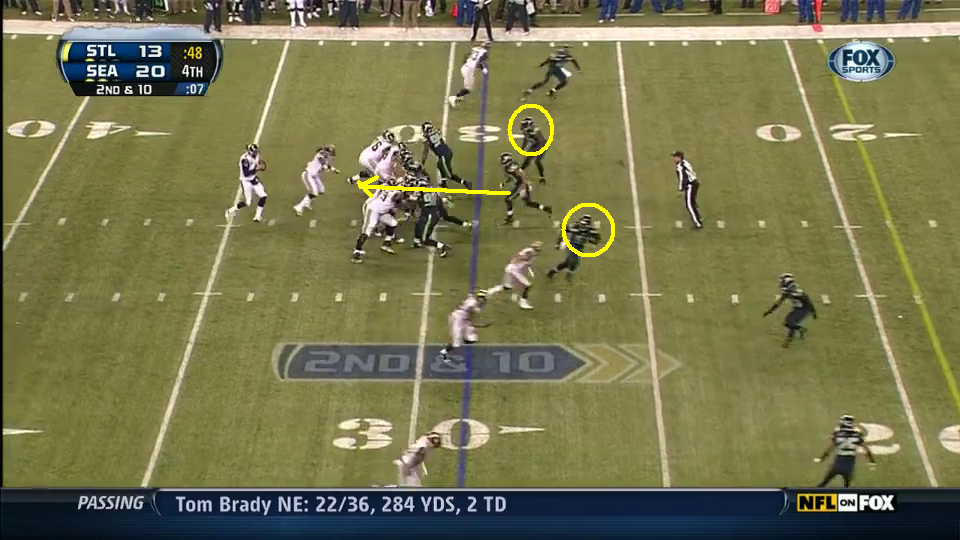 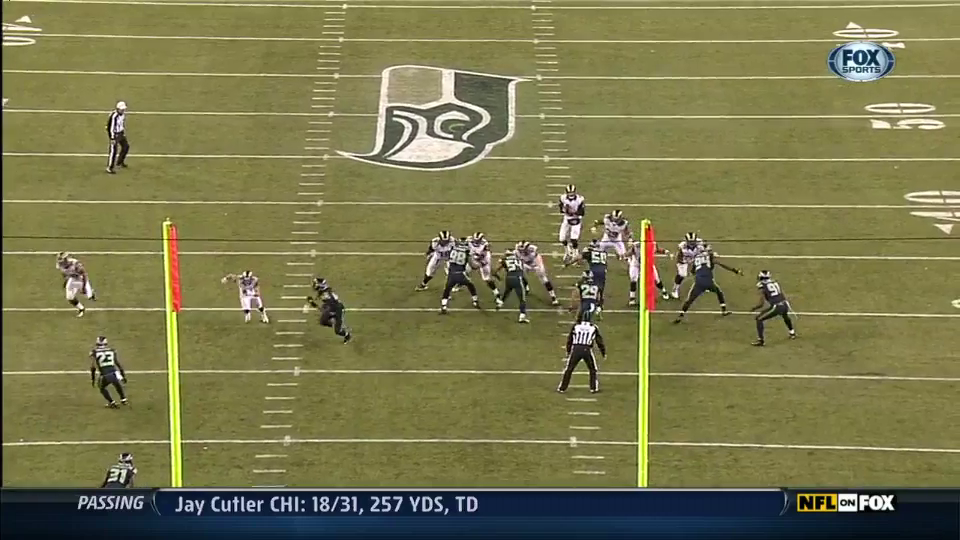 Now you may think to yourself: why was this play more successful here than the last one? Well, there are three key reasons: 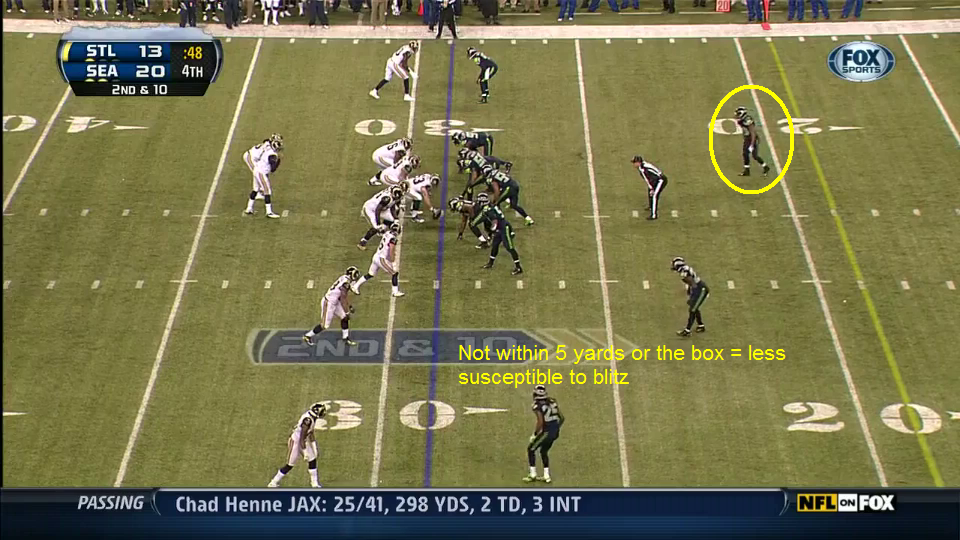 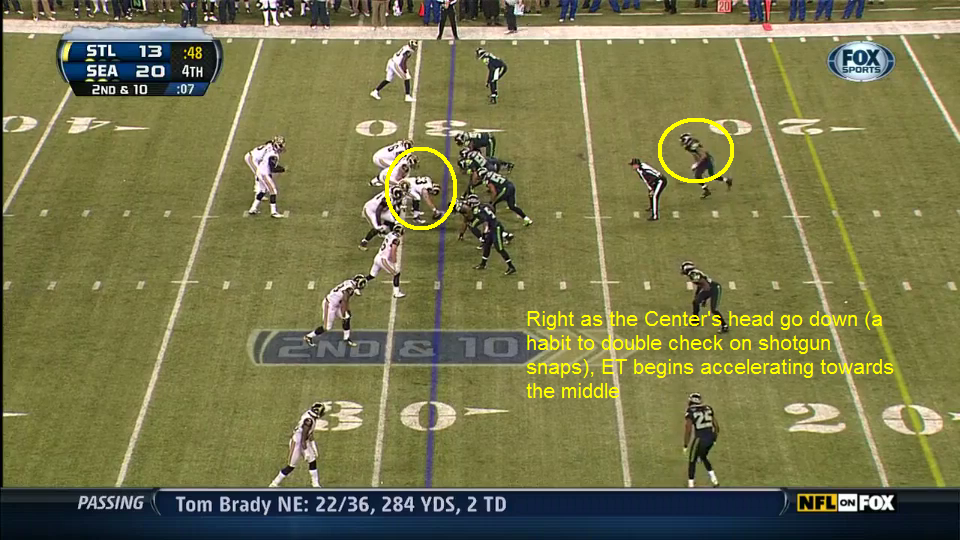 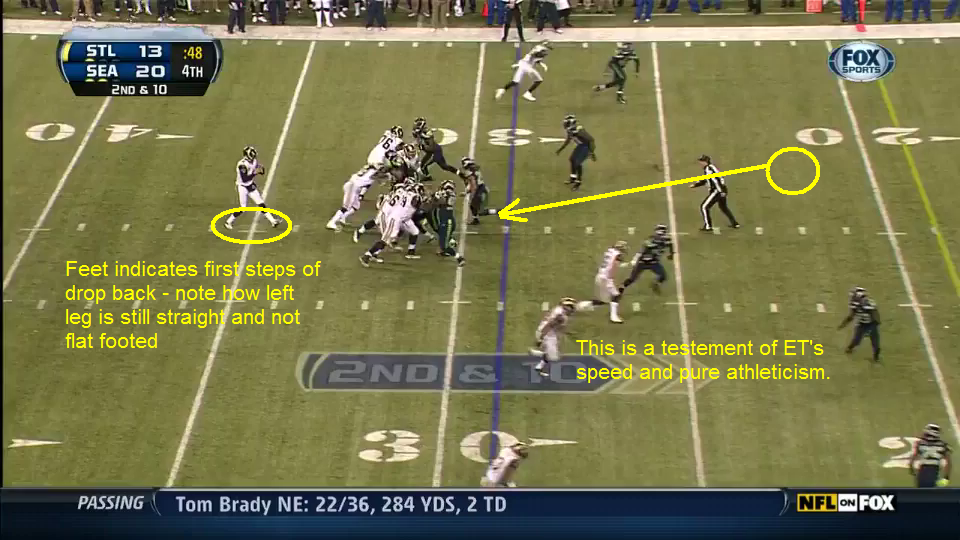 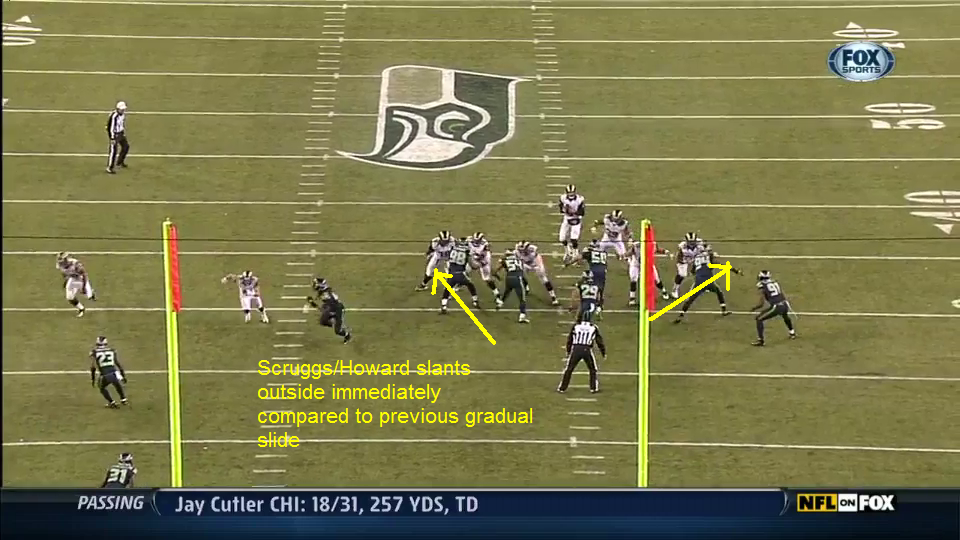 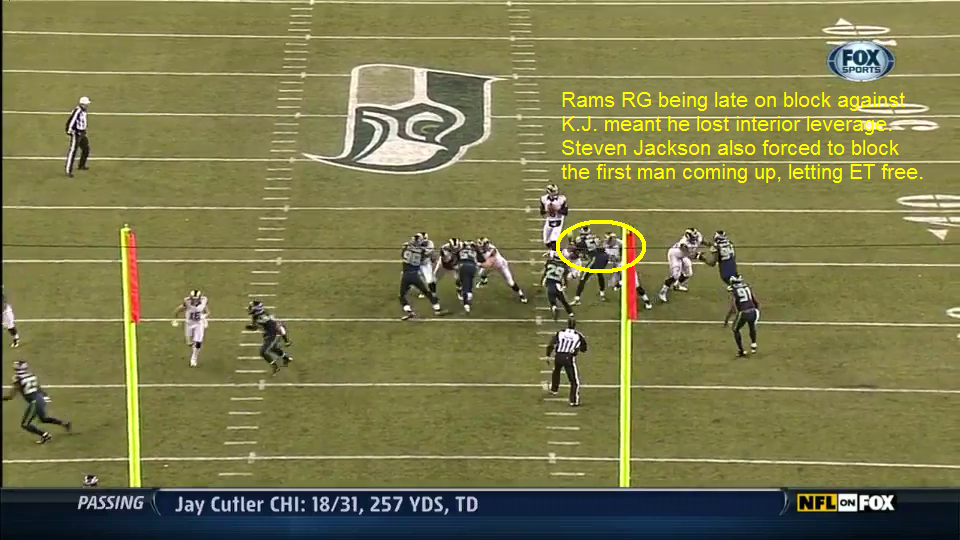 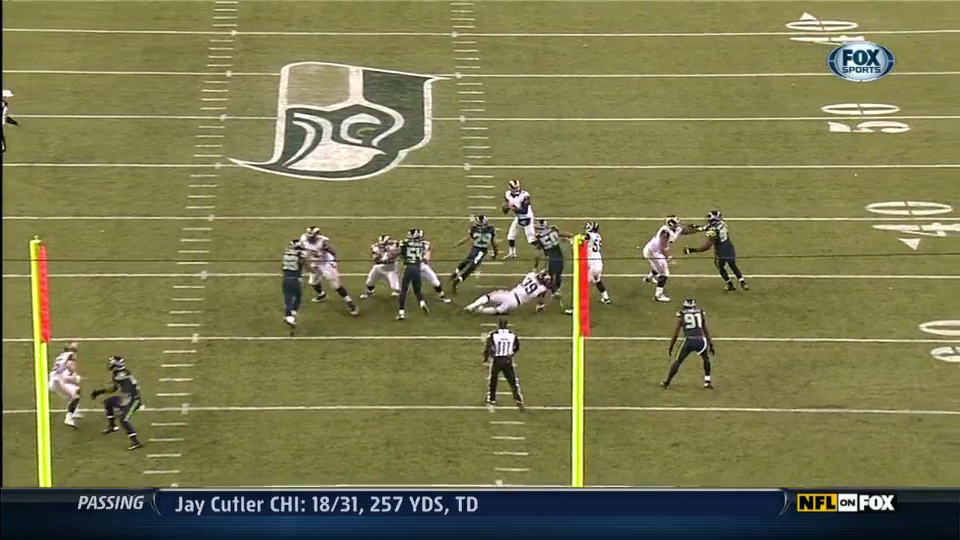 All gifs via David Hanson - round of applause please!