There is a lot of hoopla around the read-option this week and with good reason -- Seattle and Washington are two of the NFL teams that utilize it the most, and both franchises have had great success with it, frankly. It's worth noting that for all the talk around the read-option though, Seattle has only used it to run the football about 10 times per game since it became a regular feature in Week 13 against the Bears. This means you'll see it something like 1/5th or 1/6th of the time, at most. Maybe that's a lot, maybe that's not that much? I don't know. (Over the season, the Redskins use the read-option to rush about 8 times per game, or so -- Mike Sando stat magician for the win).

This means, the Seahawks still rely on the pro-style stuff - Russell Wilson under center, I-formation smashmouth and zone-blocking style looks - quite a bit.

However. ... As much as some NFL purists would like to discount the read-option's future viability, right now, it does seem to be working pretty damn well, so if Seattle is going to make a run in these 2012 NFL Playoffs, I think the read-option is going to be a pretty damn big factor. It should be, anyway, because do it until they can stop it, dammit.

Over the past five games, Seattle has average 6.9 yards per carry on rushes out of option looks, and if that wasn't impressive enough, those numbers aren't even taking into account the great multitude of things Seattle can do in read-option play-pass looks. As linebackers and safeties suck in to stop Lynch or Wilson in the read-zone running looks, downfield passing opportunities will present themselves in play-action. Seattle has taken advantage of this a little bit already this season, but it's an important factor to keep in mind this week, I think.

Seattle introduced (or, at least featured - I'm not sure if I've seen it prior to SF) a split-back look in their read-option package two weeks ago versus the 49ers on two plays - both of which were handoffs to Lynch and gained a combined 12 yards. Again, last week against the Rams, Seattle used a split-back formation in shotgun for their read-option package - with Michael Robinson and Marshawn Lynch flanking Russell Wilson prior to the snap. The Hawks ran five plays from this particular look - and those five snaps (three rushes and two passes) gained 86 yards, an average of 17.2 yards per play.

I'm sure the Seahawks noticed this. This makes me think it will become a more regular feature.

-- Though as an aside, to be honest, you never really know with this team -- I thought the 3TE sets would become a fixture too but they're rarely used, and it looks like the Pistol formation may or may not have been a two-game experiment. We'll see... --

Regardless, let's take a look at what this particular formation looks like.

Seahawks in a favorable 2nd and 3 situation. 2nd and 3 is one of my favorite down/distances because you really can do anything you want -- a run, and you've got a good chance of picking up the first down; a pass deep to take advantage of an overly eager defense that is thinking run. Either way - you fail to pick up yards running or passing, and you've got a manageable 3rd down situation.

In this case -- Seattle lines up in a split-back shotgun formation, with Robinson to Wilson's left and Lynch to his right. Zach Miller and Sidney Rice are on the wing to the left, and Golden Tate is on the flank to the right. Here's how it goes down: 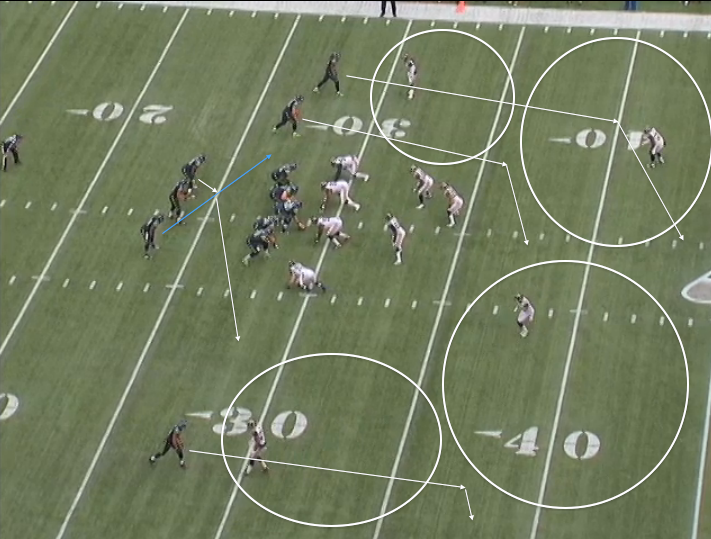 This means corners will be rolled up on receivers, responsible for the flats, and safeties over the top will have sideline to midfield responsibility. Seattle has a good play-call on for this look, and execute it perfectly. Golden Tate will run a sideline go-route and then settle into the 'hole' between the cornerback's coverage area and the safeties-- you'll hear analysts call this throw a 'hole shot' if the corner is backpedaling anywhere near the receiver, but in this case, the cornerback to Golden's side bites on the Michael Robinson route so it's an easy completion.

At the snap, Lynch runs underneath Wilson in what looks like a read-option play -- the linebackers bite hard on this, as they've likely been watching Arizona/Buffalo tape all week and don't want to get embarrassed.

As Wilson rolls out after keeping the football - Robinson leaks out as an option for him underneath. Wilson quickly notices that the corner - in flats zone coverage - bites on Robinson's route, which makes the throw to Golden a good option. Tate does his thing as the safety over the top tries to make up ground, and as he's closing in, Golden breaks the tackle. The play goes for 30 yards.

The split backs formation is just another wrinkle that the Seahawks have added to their read-zone package and I really like it because you can do a lot of different things from it. The first play, shown above, has Robinson and Lynch crisscross each other across the formation -- Robinson runs almost what looks like a 'slice' -- the counter-formation block you see Zach Miller do very frequently to take away the backside defensive end.

Robinson fakes the 'slice' though, goes around the defensive end, and makes himself available as a receiver -- do you know how hard this makes things for the DE on the backside? Not only does he have to deal with the read-option fake that's going on between Lynch and Wilson, he has to worry about Robinson cut blocking him or straight up sealing him from the play. In some cases, he may even be responsible for running with Robinson out of the pocket in pass coverage.

Another wrinkle that you could see from this look is something that we've seen Zach Miller doing in the read-option package -- an 'arc' block, where instead of pulling across the formation, Miller is moving downfield in an arc-like direction, and looking to seal off the backside linebacker, leaving Russell Wilson with a lane to run downfield through, assuming he keeps the football. I could see Robinson fake a slice, run past the DE, and then arc over to take away backside linebackers.

One of the main defenses of the read option involves the 'scrape exchange' that Jacob described in detail here - the defensive end to the backside - the guy that Wilson would be 'reading' - always crashes hard, and then the backside linebacker to that side scrapes over to take the spot of the defensive end. With the arc block from Robinson out of the backfield a possible option against the scrape exchange, it's just one more thing the Redskins will have to prepare for.

Robinson didn't 'slice' or 'arc' on every one of the plays out of this formation though, just adding to the multiplicity of the look. In the case below, Robinson, instead of crossing underneath Lynch and Robinson to slice across the formation to block #50 Rocky McIntosh, he runs a leak-out route to the right (and then just blocks downfield). PS - watch Russell Okung get away with a bear-hug on #94 Robert Quinn. Whoops. Normally, you'd see Okung execute that seal block fairly legally.

As 49ers Defensive Coordinator Vic Fangio put it prior to Seattle's game against San Fran, with the read-option, "It just becomes a numbers game. Your typical run, the quarterback hands off and its now their ten against your 11. Now when he's a potential runner, it's their 11 against your 11 and they're not even blocking one of the guys at the point of attack, so it actually becomes 11 against ten if they do it right. So, the numbers are flipped."

The quarterback-running back exchange freezes McIntosh for a split second, and that moments hesitation acts as a de facto 'block' -- allowing Lynch to just run past him. McIntosh gets a little bit of Lynch's jersey, but that's not going to stop him.

The other option -- a quick dump-off to Robinson.

The Seahawks love the dump-off to Michael Robinson out of play-action I-formation sets. This play got them a touchdown last weekend and it's gotten them a multitude of first-downs in key situations. The Seahawks ran a different variation of the I-formation dump-off but this time out of the split-back shotgun look.

Backside linebacker #58 Dunbar floats to the middle initially fearing the Lynch run, hesitates for another moment to make sure Wilson doesn't run when Lynch doesn't receive the handoff, and by the time Wilson dumps it off to Robinson, he's clear to the sideline almost. This is why the read-option works so well. Frozen linebackers.

Robinson with the obligatory truckage or a hapless defensive back. Thank you, BigTrain, for your mastery of Gifs.