The Seahawks' 3rd down lynchpin: Zach Miller at H-back

Share All sharing options for: The Seahawks' 3rd down lynchpin: Zach Miller at H-back

In the past couple of weeks, against both the 49ers and Rams, Seattle introduced a split-back look into their 'read-option package' - a shotgun formation with Michael Robinson and Marshawn Lynch flanking Russell Wilson prior to the snap. Out of this look, against the 49ers, they twice option-style handed off to Lynch and he gained a combined 12 yards. Against the Rams, Seattle used the split-back formation five times, and those five plays (three option-style rushes and two passes) gained 86 yards, an average of 17.2 yards per play.

As I pointed out last week while breaking down this little wrinkle, the split backs formation is just another tweak that the Seahawks and Darrell Bevell have added to their read-zone package, and I really like it because you can do a lot of different things from it. You can have, among many other options, Robinson and Lynch crisscross each other across the formation and under Wilson -- with Robinson running almost what looks like a 'slice' block -- the counter-formation block you see Zach Miller do very frequently to take away the backside defensive end.

Robinson can make that block, or fake the 'slice' and go around the defensive end to make himself available as a receiver. All these options make things difficult for the typically unblocked DE on the backside, because not only does he have to deal with the read-option fake that's going on between Lynch and Wilson, he has to worry about Robinson cut blocking him or straight up sealing him from the play.

Darrell Bevell and the Seahawks, as they've done pretty much every week this season (which I absolutely love), again tweaked (or added on to) this look ever so slightly against the Redskins, giving Washington's defense a pre-snap look that they weren't watching on tape the week prior, but a formation that essentially accomplishes the same thing.

In this week's iteration of the 'split-back' shotgun formation, Seattle swapped in Zach Miller for Michael Robinson, taking what was normally a '21' personnel grouping last week (2RB, 1TE, 2WR) and going with an '11' personnel grouping - (1RB, 1TE, 3WR). This is a subtle change in player utilization, but when teams are preparing during the week and then diagnosing/predicting plays during the actual game, personnel groupings are one of the main things to watch for initially. In addition to personnel, formations can be 'tells' of what kind of play an offense might be running, so when Miller replaces Robinson as the H-back (set back off the line but not in shotgun next to Wilson), the defense has been given a slightly different look.

The beauty of these read-option looks too is that you can just run pro-style plays out of the shotgun when teams are thinking zone-read the whole way.

With Seattle down 14-0 to the Redskins with the first quarter winding down, the Seahawks' offense desperately needed to get out of their own end and get something, anything, going on offense. Unfortunately, following a delayed linebacker blitz that got to Russell Wilson, the Seahawks found themselves in a 3rd and long from their own 18. I was not in a good mood.

Seattle ran a fairly conservative play, not surprisingly, but executed it well against what looks to be a quarters coverage, or at the very least, a very soft cover-2. You'll see Washington's corners drop back fairly deep at the snap, and Doug Baldwin and Sidney Rice will just run go-routes, gathering the attention of the corner and safety to the offensive right. 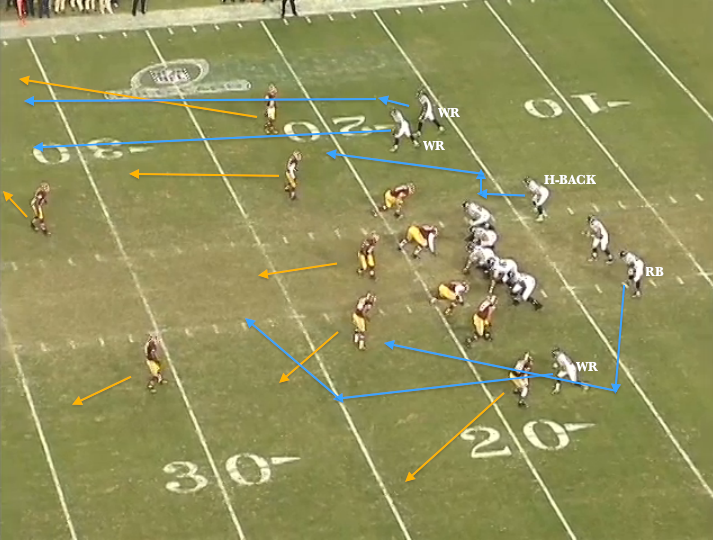 The ball is snapped. As you can see, Russell Wilson simply drops back, forgoing read-option or play-action entirely. The Redskins weren't buying it anyway. As Rice/Baldwin run their routes, the underneath zone opens up for Miller as he chips-and-releases. Wilson gets a throw off of his back foot and Miller has to shoe-string catch it. He then has six yards to go for the first down, and he spins off a Josh Wilson tackle attempt and lunges for the first down. I'd never loved Zach Miller as much as this moment in time, and I really like Miller.

Seattle's offense would ignite slightly after this; a 1-yard Lynch run followed by the 19-yard gain out of read-option that I broke down yesterday, and the Hawks would go on to kick a field goal and get on the scoreboard. With a punt in this situation, things would have been getting kind of hairy for the Hawks.

Fast forward to the fourth quarter. Seattle has taken over in nearly every facet of the game save for the score, and despite dominant numbers in yardage & time of possession, still trail the Redskins, 14-13. After starting out the drive well, with a catch for 7 yards by Golden Tate then a rush for 18 yards by Marshawn Lynch, Seattle stalls. They try a read-option but Wilson is bottled up for no gain. They throw it to Miller, who can't corral it. It's now 3rd and 10, With Seattle just short of midfield and still looking for the lead. 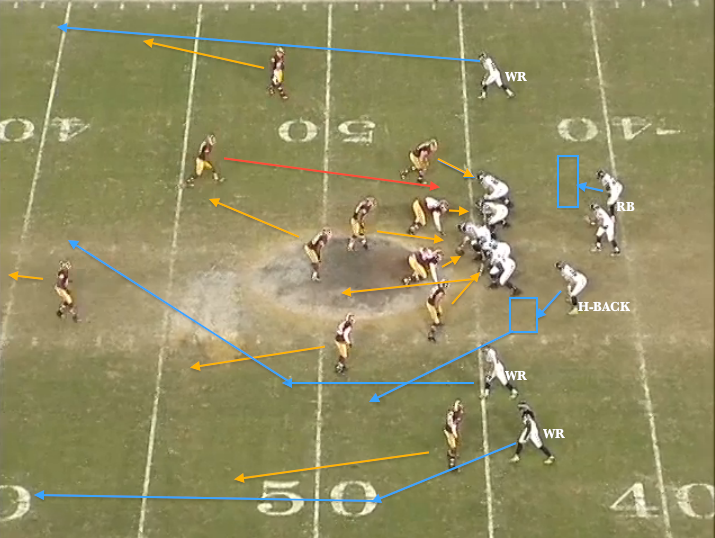 The Redskins tip their hand early when the weak-side safety creeps in during Wilson's cadence. Wilson holds up, points to the safety, and then re-sets. At the snap, the 'Skins go into a 3-deep shell with what looks like man deep and zone coverage underneath. This is a standard thing on 3rd down, and Washington sends 5 while dropping 6.

The Seahawks run Baldwin up the middle toward the middle deep safety, then have Rice and Tate run deep up the sidelines - this clears the three-deep safety/corners, and leaves three linebackers/nickelbacks underneath in zone.

Rookie RB Robert Turbin easily picks up the blitzing safety to the right, and Miller, after what seems like an interminable chip block, releases downfield. Here's how it plays out (perfectly). Miller only has to beat the zone-defending defensive end to his side, who, after faking the rush, drops into the middle of the field. 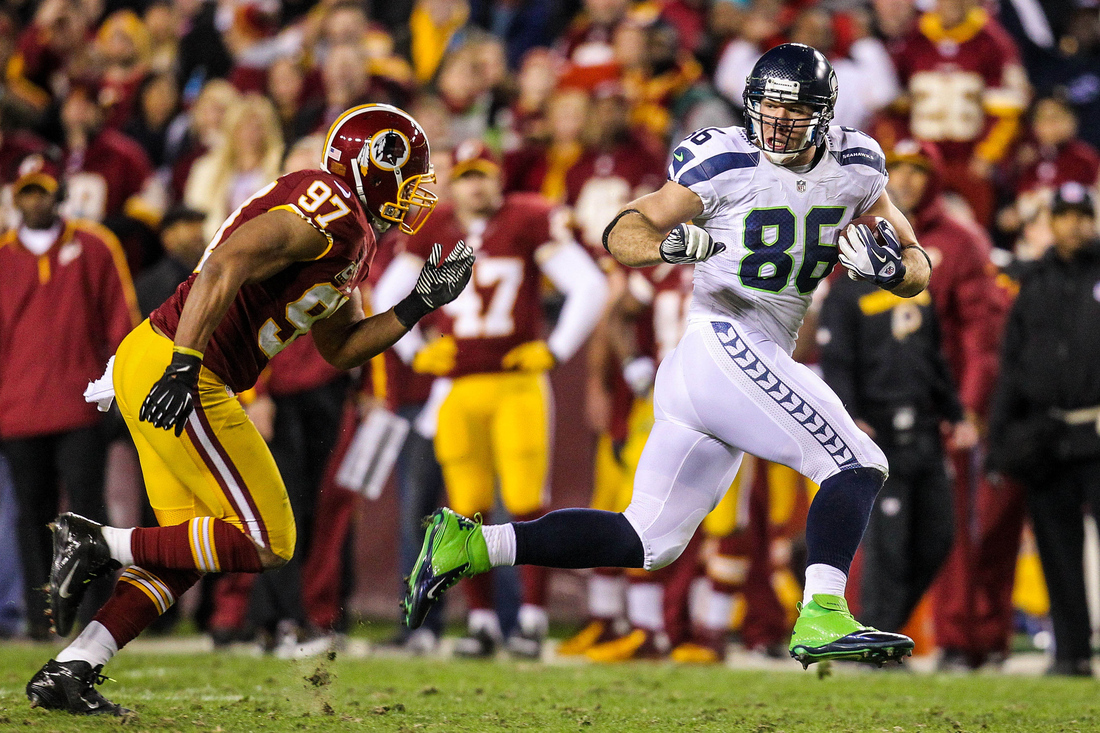 Seattle runs read-option play-action on first down and Wilson's forced to throw it away, then picks up five with Lynch on 2nd down. It's another quick third down from the Washington 27, so Seattle goes right back to its trusty '11' personnel, Miller at H-back look.

Seattle goes to their read-option out of this look (after using straight drop backs out of it on the last two plays I broke down). The Seahawks block zone left, but use Zach Miller underneath to slice block across the formation.

Remember yesterday when we talked about the 'scrape exchange?' To counter read-options, (which for the Seahawks, typically means Russell Wilson 'reads' the defensive end, and depending on what that defensive end does, decides to hand off or run himself) defenses have their defensive end crash down automatically, theoretically forcing Wilson to hand the ball off. Behind, they have their linebacker 'scrape' around and meet Wilson, who has kept the ball (in theory, after seeing the crashing DE), and tackle him.

This all works in theory of course. Except Seattle doesn't have a read-option on, they have a called run play in the disguise of a read-option (I believe). As the DE crashes inside, Breno Giacomini moves with him as a zone run would call for, and Wilson hands off regardless. Miller comes flying accross the formation to slice block the 'scraping' LB in Perry Riley, and Riley, expecting to just tackle Wilson, is surprised by a 6'5, 260 pound Miller running full speed. Miller flat-backs him.

This opens up a big hole to the right, which Lynch hits. Lynch then goes to his patented juke-move (COUGH) to fake a crashing DeAngelo Hall out of his jock. Full head of steam. Touchdown. 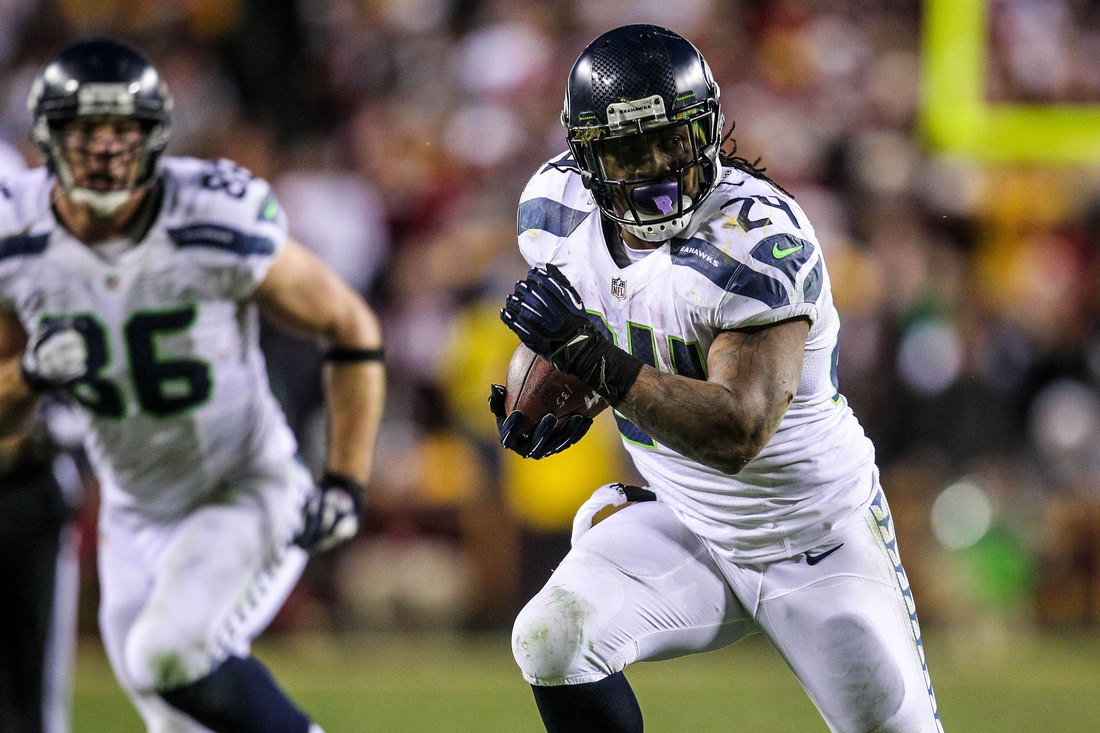 How about another angle on that?

Obligatory Russell Wilson 'kind of get in the way' block.

Thanks again to BigTrain for the amazing gif action.