This is how you finish.

It's not how you start, but how you finish.

That statement above probably sums up the entirety of Pete Carroll's philosophy, and one that has continuously emphasized every year he has coached. And in the four seasons we've spent with Carroll we've seen its importance in both wins (Houston, Carolina, Chicago) and losses (Indianapolis, Atlanta, Detroit),

Of course, finishing doesn't always apply to games and winning the fourth quarter. I would argue that finishing every quarter, every drive, even every play is vital to getting the W. In the dark ages of 2008 till the first half of 2011 we learned the potential consequences of leaving points on the field because we can't convert on 3rd and goal. And for all the clock churning stretches and big plays Russell Wilson has lead this year, we haven't seen them finish.

That is, until yesterday. Perhaps what was most impressive, other than the touchdown, of course, was the gameplan installed. I've been calling out Darrell Bevell for his play selection, but it works great for the drive here. Let's break it down:

First play of the game.

Arizona's defense is playing to their scheme, and already showing blitz by drawing the two outside linebackers close. With a suspect offensive line, Seattle has to take advantage of that and keep them on their toes and play conservative. 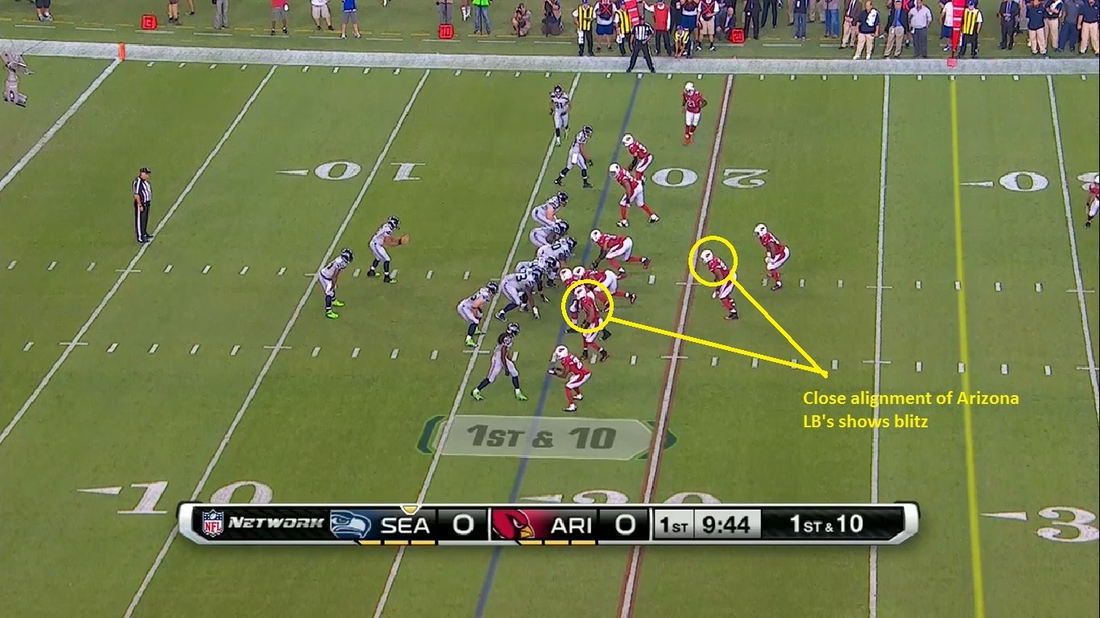 Formation-wise, it's shotgun 11 personnel, except not really. Zach Miller is a TE, but his alignment makes him more akin to H-Back, and not the more traditional Y player. The positioning of Miller and Sidney Rice creates a running lane for the QB (in the case he takes the ball) well before the play has even started. These guys are also severely underrated run-blockers - watch how easy they take out the OLB and DB to create space. 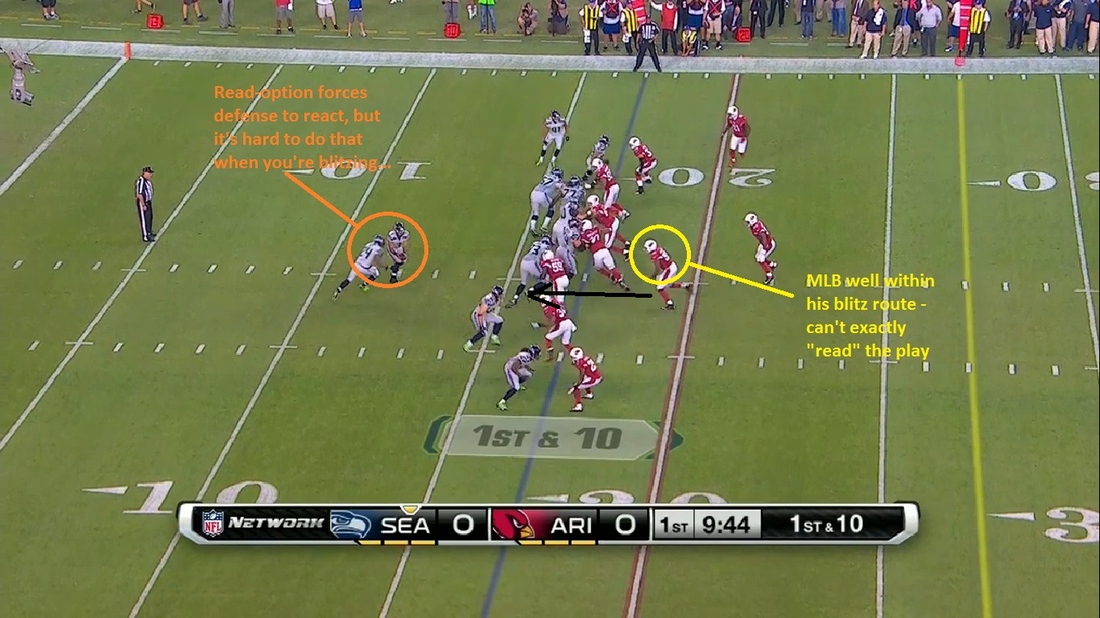 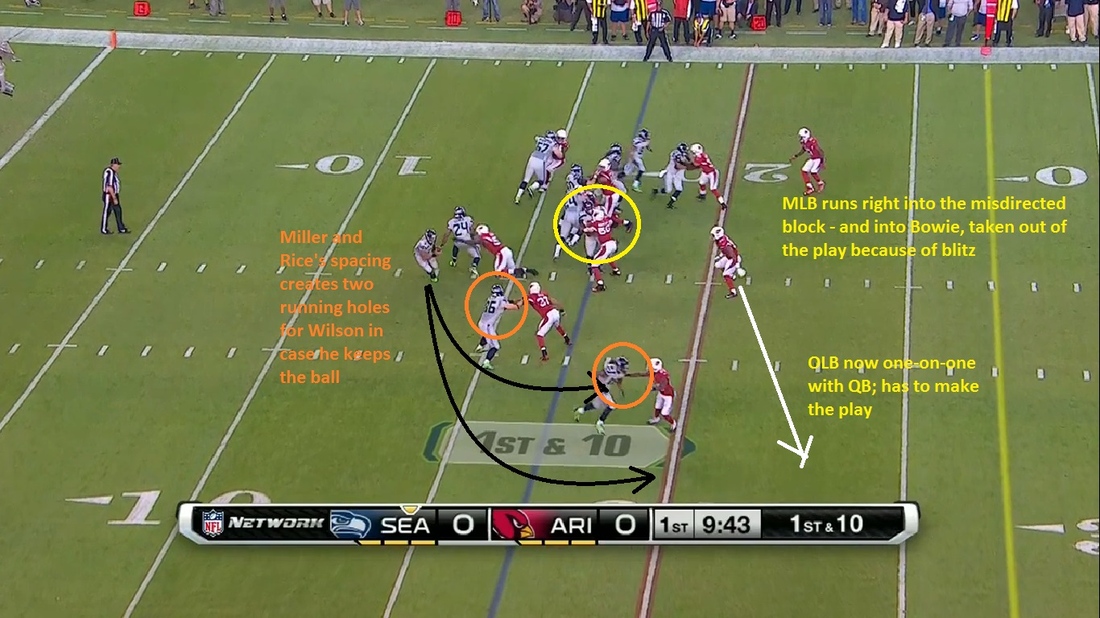 Marshawn Lynch and the rest of the OL sells the misdirection enough so that it freezes the LBs, who are well in their blitzing lanes. I don't know if Bevell or Tom Cable planned for this tendency to happen or not (probably would as that's their job), but the play selection of read-option was the perfect counter. Easy first-down here.

[DK Note: You may recognize this play from the post on Seattle's intermediate passing game].

Play-action. Like the read-option, the play-design is to force the blitz heavy scheme to react and not play to their strengths. Now, the Cardinals are not so direct with showing their hand, and back off with the linebackers. However, notice how, like the last play, the majority of the defense is playing in the box. Another advantage the Seahawks need to take care of. 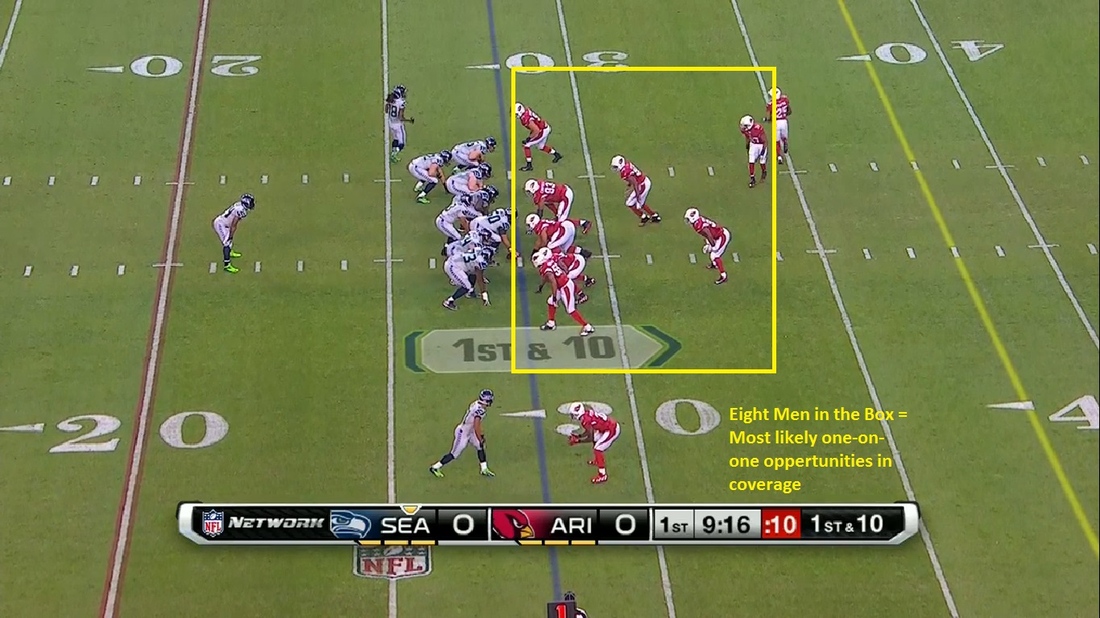 New personnel - 12, now it's double tight towards the left side. Willson and Miller reverse roles. Rice lines up at the slot and motions out wide. Keep this in mind as we progress throughout the drive.

The Cardinals blitz again - this time with two guys - which opens up the entire left half of the play. With Miller, Willson and Rice all lined up on the same side, three defensive players (one of whom who is a defensive end) are forced to play one-on-ones. Instead, Arizona plays a mixture of both, and as a result, Miller draws two guys with his deep route, leaving Willson with the open throw and the space between the sideline. 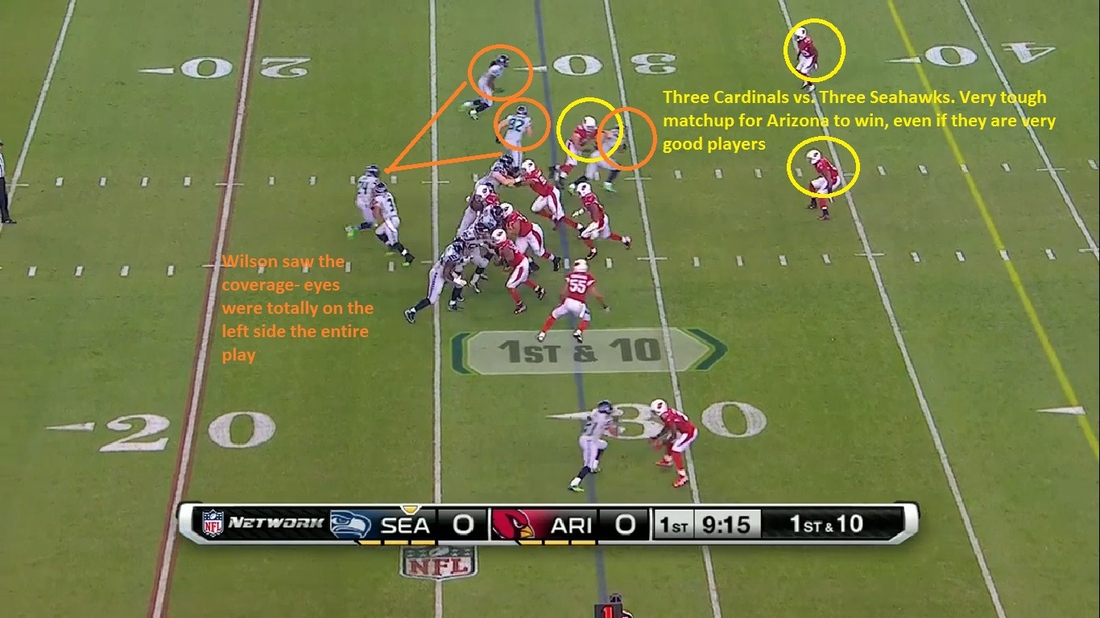 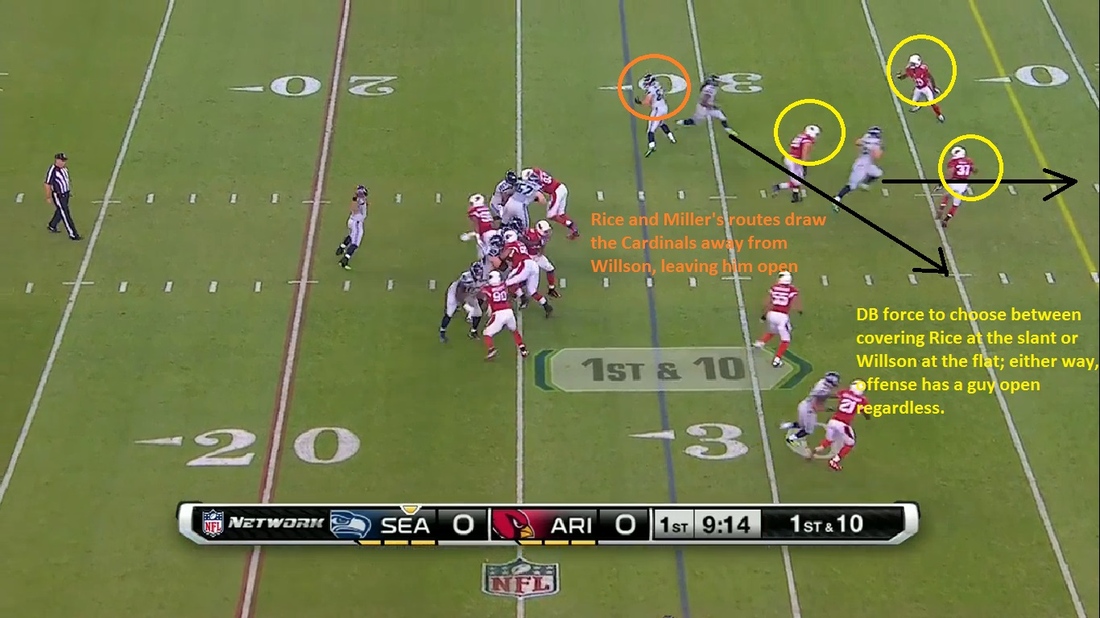 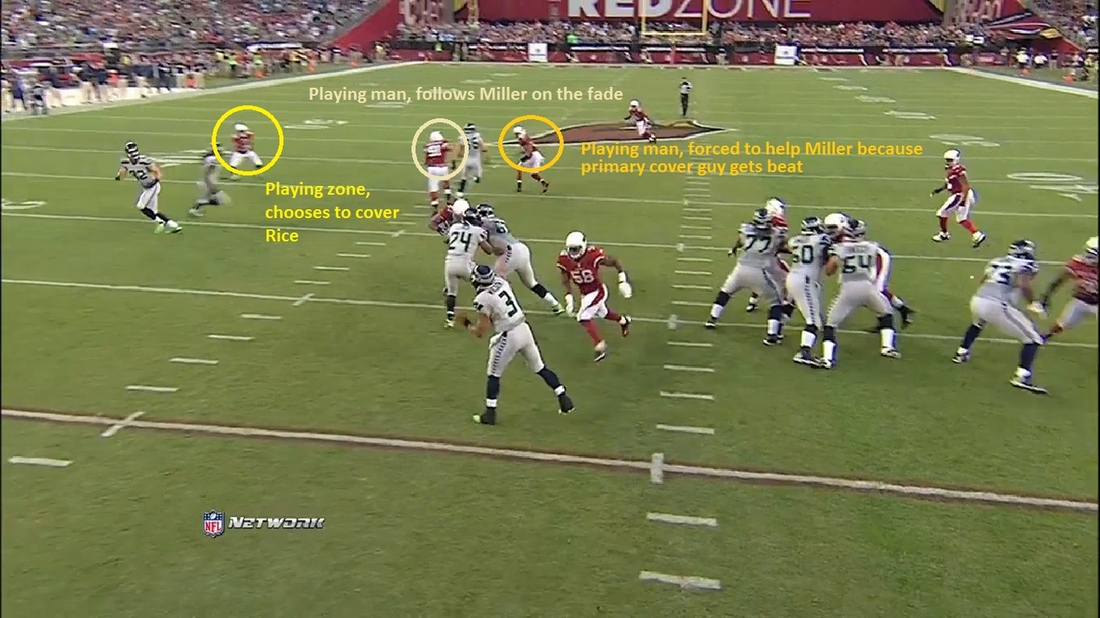 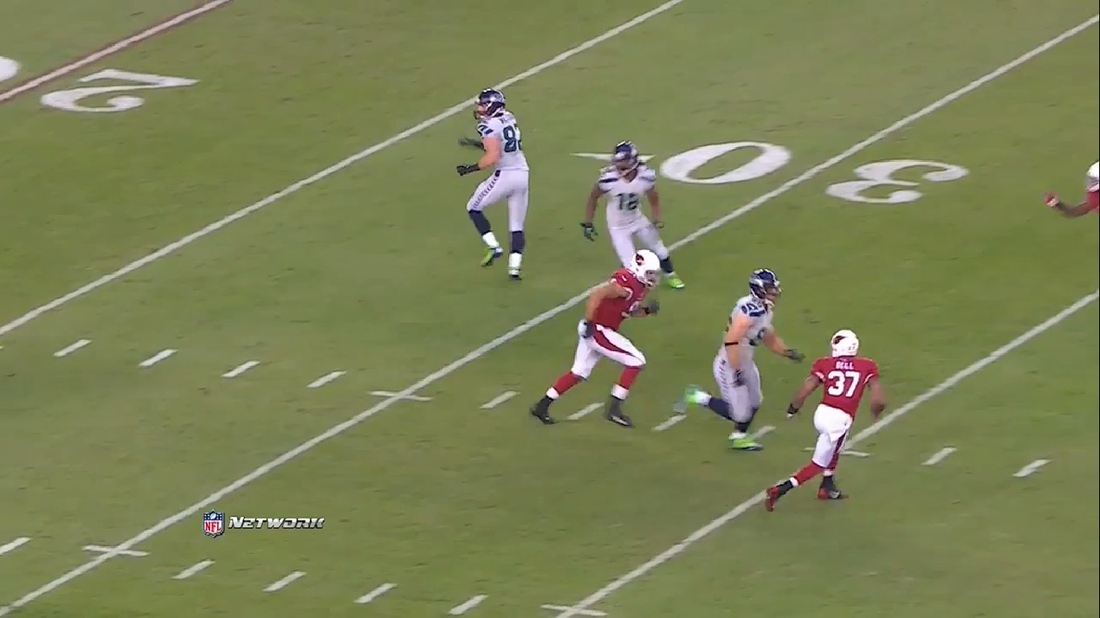 Again, eight guys in the box. And again, the Seahawks will force the Cardinals to pay. It's a halfback screen this time. Derrick Coleman rotates in and it becomes 21 personnel.

Cardinals do not blitz, which lets the majority of the OL get a good cushion to block the second level and Wilson to let the play develop. Notice how the routes that the rest of the WR's run are also ones that Wilson is capable of throwing to - a nice safety net in case the screen does break. Missed block by Sweezy lets OLB Daryl Washington make the play.

Offenses switches back to 12 personnel and two tight ends. Formation-wise, it's a combination of the first two plays of the drive - Willson is at the H-Back and Miller is at the Y, Kearse motions from out wide to the other side. And again Cardinals continue to put eight men in the box. 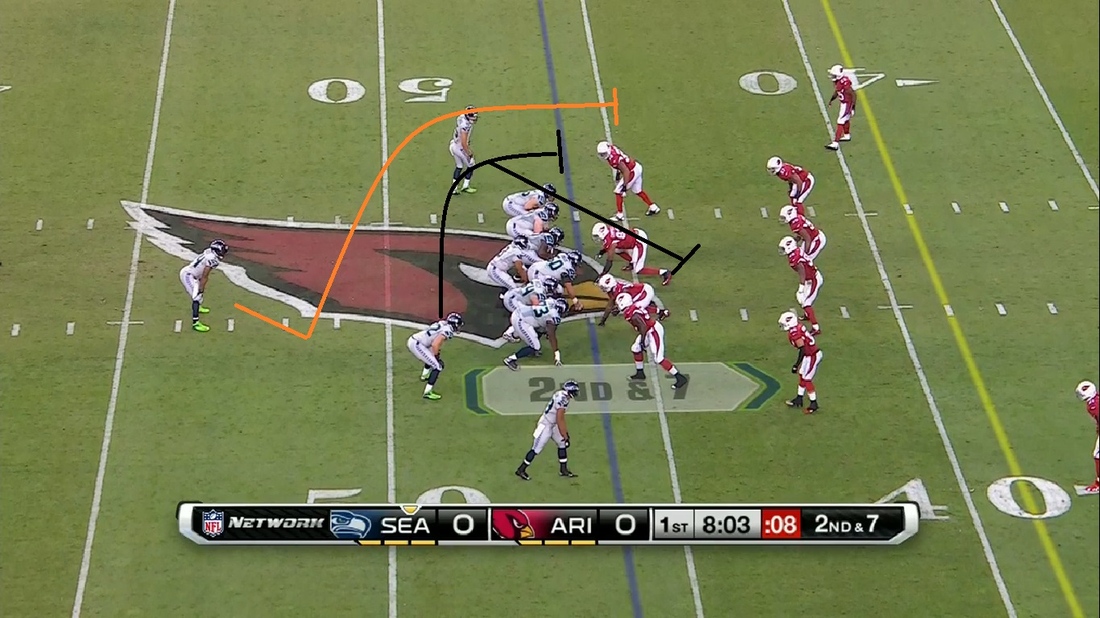 Willson counters towards the left side with the crack block and Kearse runs a slant directly at the defense to screen a block, something you see out of basketball. Zone Blocking emphasize multiple options in a play, and because the majority of the traffic is headed towards the inside, Lynch bounces out towards open space. 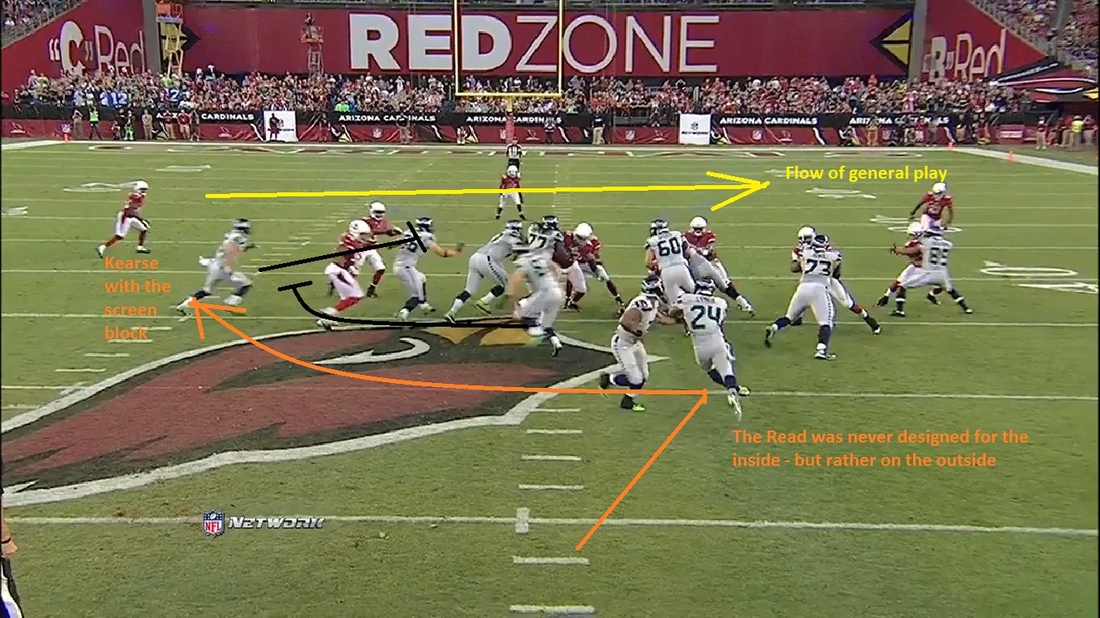 [DK Note: You may also recognize this play from the post on Seattle's intermediate passing game].

Even with a broken play, Wilson makes something happen. After five futile plays of non-blitzes, the Cardinals finally disrupt the passing pocket. Wilson rolls out to his right to evade pressure, where most of the D-Line is waiting for him in contain.

It's trips bunch right - and the Cardinals are playing zone. Interestingly, there were open throws that Wilson could've made in place of the TD. But then watch how the majority of the WR's re-adjust their route in concordance with the rollout away form pressure, and then have Sidney Rice splits the coverage by going down the middle. 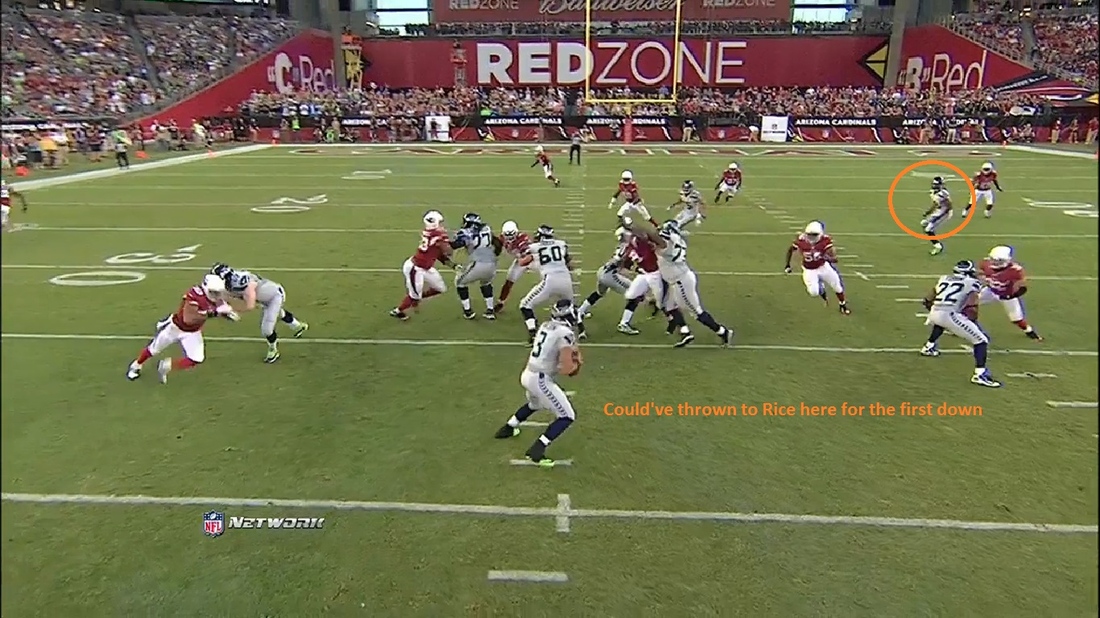 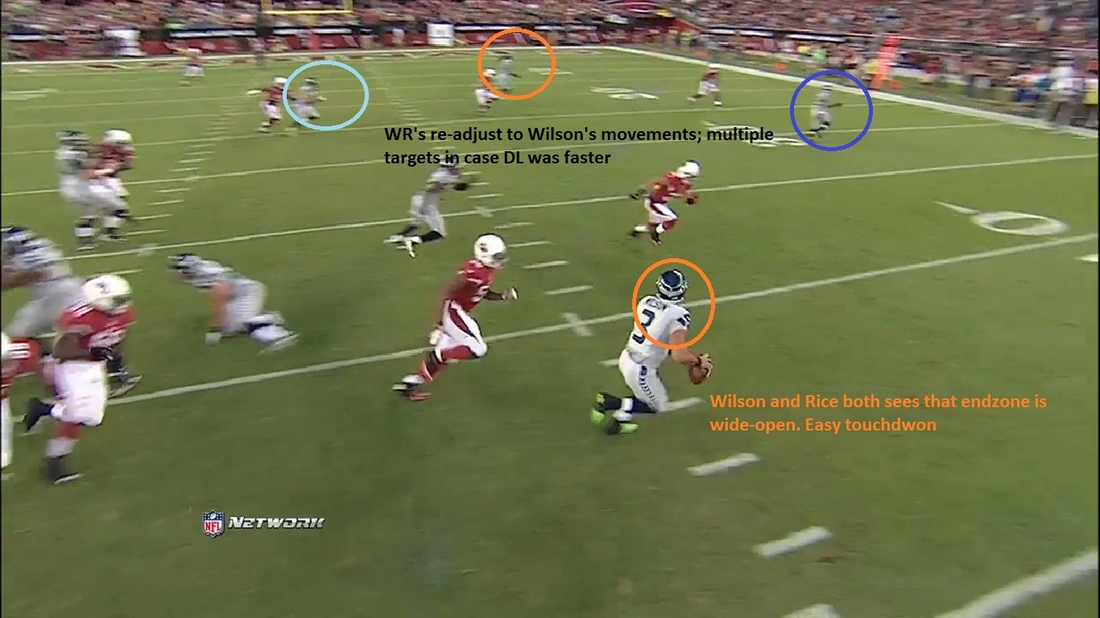