This Week In Defense, part I: Titans at Seahawks

Share All sharing options for: This Week In Defense, part I: Titans at Seahawks

DK NOTE: Due to the short week and Thursday Night Football, Josh is doing "This Week In Defense" for both the Tennessee game and the Arizona game today. Notes from the Arizona game will be up later today.

Coming in, the media and fans alike were disappointed in the Seahawks' loss to the Colts. They both expressed fear that if Tennessee could manage to 'ugly the game up,' they could sneak out of the CLnk with a victory. I thought an ugly game would be okay, as long as Seattle held to its resolve of tough defense. Overall, I think folks were just worried about a hangover heading into this game after witnessing Andrew Luck's amazing success the week before.

This play needed to be spotlighted early because it's interesting to note just how Seattle responds to the Titans' bunch formation.

This is something teams are going to try to use to beat the press-man that Seattle plays so frequently, counting on the traffic to create space. The problem for Tennessee, and other teams, is that it takes a bit more time on some of these plays to clear enough space to make a throw.

In this case, DE Chris Clemons spins inside and applies pressure, and Titans QB Ryan Fitzpatrick is able to run in the vacated space for the first down. I think we'll see quarterbacks, even those with a lack of mobility, looking to move or run as it becomes harder and harder to get quick developing routes against this defense.

I have rooted for Malcolm Smith ever since I read about his speed measurables the day after the Seahawks drafted him. He's slowly but surely become a contributing member of this defense, and on this particular play he explodes to the ball as it's dumped off to Chris Johnson. This kid is almost ready to fulfill my greatest dream for him to be the more explosive Julian Petersen.

Walter Thurmond has made all the difference in this defense from the slot this year. This play is a good demonstration of that.

Thurmond trails Titans' WR Justin Hunter and has great leverage for this route - meaning leverage will provide an angle on a stop, and the leverage in this case is "trail over the top." 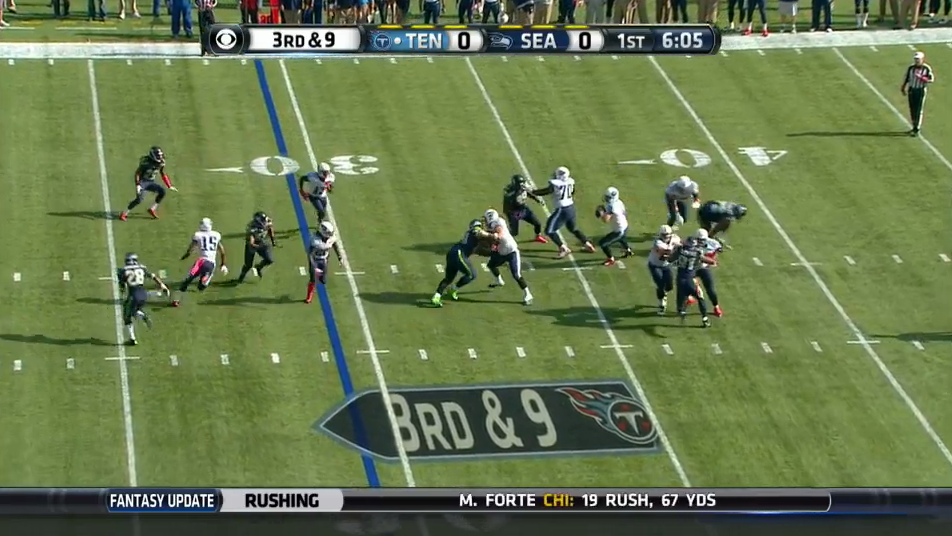 This route is really unstoppable in terms of a completion - but what a defense has to do is tackle in space, sometimes with the other receivers directing traffic, and so more often than not it's a catch and a first down. Thurmond has a great angle on a tackle but can't quite finish it. Earl Thomas comes over to help, Hunter slips off of that tackle as well, and Thurmond gets up and gets involved in the tackle an a second effort that forces a field goal. 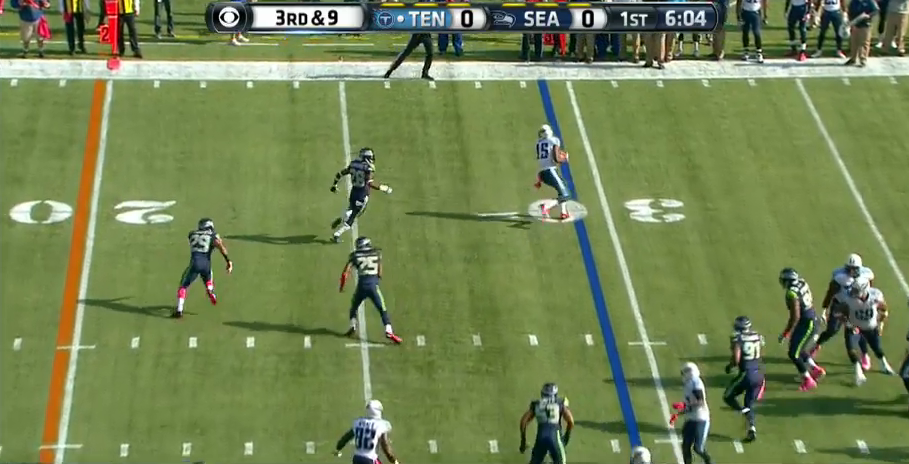 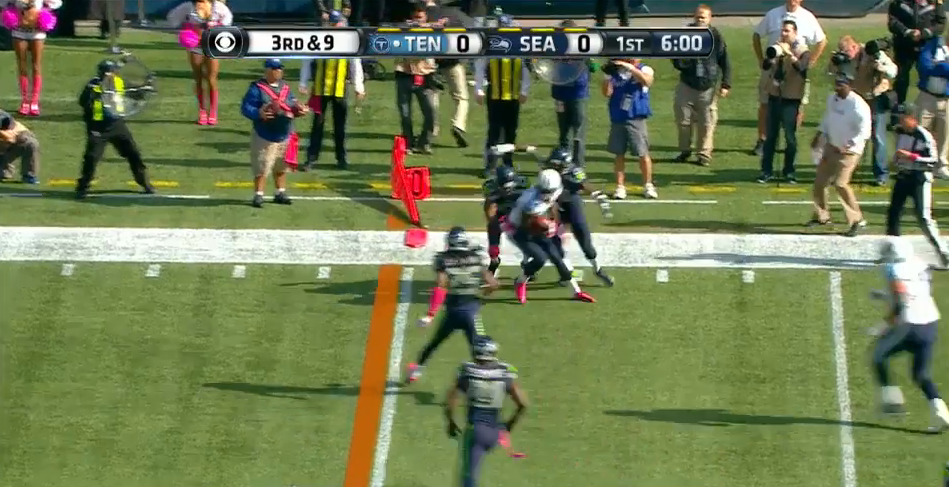 Thurmond had three or four plays in this game where he really took the slot man away and it's only getting better and better week to week.

Side note: These are the types of plays Pete likes to say are plays made in the details. Thurmond understands exactly the down, distance, and coverage situation. Too many times guys just try and physically respond to what they see and adjust as it's happening, but Thurmond responds instantly once Hunter takes the inside release and gives ground to get over the top of the route.

Usually the mistake here is the corner takes a bad angle or waits a bit too long to give ground and then winds up being in no position to make a play. It's not as easy as it looks and it's all the details and Thurmond shows perfect calm as he reacts to the play.

Walter Thurmond again has great coverage, and gets a terrific press. Titans' WR Kendall Wright attempts to shrug him off and turn to look for the football, however the little bit of momentum absorbed in the push-off attempt screws up the timing of the play and Fitzpatrick and Wright can't connect.

This is the type of play that Marcus Trufant had some trouble with last year - getting jams and then carrying the receiver through his route - but Thurmond is showing brilliant technique here midway through the year. This play is somewhat reminiscent of the now-famous Richard Sherman jam on Steve Smith from 2012. The press is all about disrupting timing, and that works here.

Chris Johnson finds a crease. Earl Thomas had at least four of these exact types of plays against the speedster Johnson, and as we've seen throughout this kid's career (Johnson), he's one play away from a homerun with every touch of the football. Tennessee hits even one of those plays and it's a different ball game. Earl see's him breaking loose and comes down laying the wood. You can hear the screams from Earl as he excitedly establishes dominance.

There weren't many spectacular plays this week. It looked very station-to-station, technical defense. Dan Quinn did call a few blitzes but nothing too exotic. Pete's big decision to take Brandon Browner out was really no shock to me. I'd seen it before when he took Kam Chancellor out last year in some nickel looks against the Rams and replaced him with Jeron Johnson. Pete is unafraid to make changes if a player is struggling. I applaud him for that.

Earl Thomas. I've been hard on the guy at times in the last two games, but he really came through in this one. We've seen games like this from him - for instance, he had a huge game against Adrian Petersen and the Vikings last season as well. I love being able to present this award to Earl because he really does make the defense go.

Coming out of this game, the front four needs to get more work against a compressed look that offensive lines are giving them in pass protection. While they had pressure and a pair of sacks, this look has been successful so far for the competition. Houston, Tennessee, Jacksonville, and Indianapolis have all used this look to battle the pass rush so far and been pretty successful.

Thanks to Danny for the .gif collaboration!