About those Russell Wilson fumbles...

Share All sharing options for: About those Russell Wilson fumbles...

It's arguable that ball control is one of the key components to a successful team in the NFL. For example, nearly every team that has made it deep into the playoffs for the past four seasons has had a positive turnover ratio.

A dominating defense can be categorized as one that creates takeaways at the perfect moment, stalling deep drives and leaving points off the board even if it consistently gives up large chunks of yards. This is the pathway that Pete Carroll has envisioned for his team to take all the way to the Super Bowl.

As of seven weeks into the 2013 season, it's working pretty well - at least for one side of the ball. As expected, the Legion of Boom and the rest of the defense has wrecked havoc on opposing teams, creating 11 interceptions and 8 fumbles. But offensively, it's still a problem. The entire offense has accounted for 12 total giveaways (tied for third worst in the league). Russell Wilson has already posted a career high of 8 fumbles through seven games compared to the 6 he had the entirety of last year.

The sheer success of the defense has kept Seattle in the lead in terms of turnover ratio at +7, but we have seen the frustration that happens when we consistently give the ball away. Said Carroll in the press conference following the Titans 20-13 win: "I haven't seen that many fumbles and that many mishandles, and it really gave [Tennessee] a chance to get in the game. We made enough mistakes to make it a close game when it didn't need to be."

Remember this was a team that had emphasized playing safe and not letting the defense take advantage all throughout last year - this was a team with a that continued to embrace ball control even when their quarterback had developed past the point of conservatism.

So what's going on?

Hawkblogger, aka Brian Nemhauser, wrote something that I wholeheartedly agreed with in his post defending Russell Wilson's work:

The problems on the offensive line are absolutely a large part of the issue. Consider, though, that Seattle ranked 26th in the NFL in sack percentage allowed last year. This line has yet to demonstrate great pass protection, but it was good enough for Wilson to excel last year.

One must remember that, aside from Russell Okung and Max Unger, this is a team that is currently starting three replacement level or at least "slightly above-average" players. Breno Giacomini, Paul McQuistan, James Carpenter and J.R. Sweezy are all doing wonders for the ground game and have been since last year, but their glaring weakness has been continuously exploited by defenses this year. Watch this play against Carolina earlier in the year, when Russell Wilson fumbled on the Panthers nineteen yard line with 40 seconds left in the half:

Against Charles Johnson, one of the better defensive ends in the league, Giacomini loses the one-on-one battle pretty badly. Johnson isn't throwing any athletic chops or jukes out here - he beats Giacomini towards the outside corner with his speed and quickness and does a basic strip on Wilson with his arms outstretched, swatting the ball away.

As Wilson is scanning the left side of the field - he's practically being blindsided from behind and has absolutely zero precognition about protecting the ball. In fact, it seems Johnson timed the sack during mid-throw, which is the perfect opportunity to create a fumble. The Panthers would end up recovering the ball and the Seahawks left at least a field goal to end the half. They would win 12-7, but again, it didn't need to be that close.

Michael Bowie is making the same exact mistakes as his replacement. Watch below how the two point stance of John Abraham gives him leverage to beat Bowie, who is slower in the drop-back and doesn't have the quickness to get the angle on the defensive end. Note how Abraham also times his sack to the point where Russell is in a transitional motion and thus, at a point where the ball is unprotected.

Here's a near exact replica of the Carolina/Johnson play, only this time it's in Arizona with Abraham again vs. Paul McQuistan.

It is still the same thing; McQuistan was beaten to the outside edge and Abraham just uses his quickness to get Wilson at mid-throw. In situations like this, the quarterback is not at complete fault here - how can he be, when the tackle isn't exactly doing his job?.

Of course, when Wilson holds the ball for too long and then doesn't protect it... well, that's another lesson to be learned. Look at the GIF below in real time here, and count for how long Wilson is in the pocket. You should get a range between 5-7 seconds.

The problem isn't that Arizona is playing good coverage. The image below is at the point where Wilson finishes his three step drop. Both Tate and Baldwin are open: 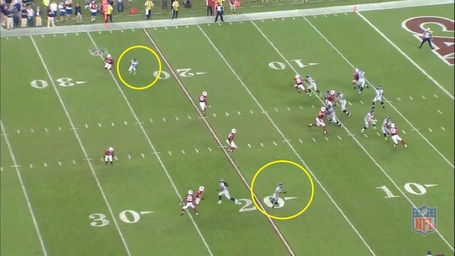 Wilson, for some reason, hesitates on the first read just enough so that the outside linebacker drops back to cover the front of Tate while the cornerback drops from behind (Perhaps he wasn't comfortable making that throw knowing that the linebacker could jump the pass and intercept it). Now he has to look for the second read - and immediately turns to Baldwin: 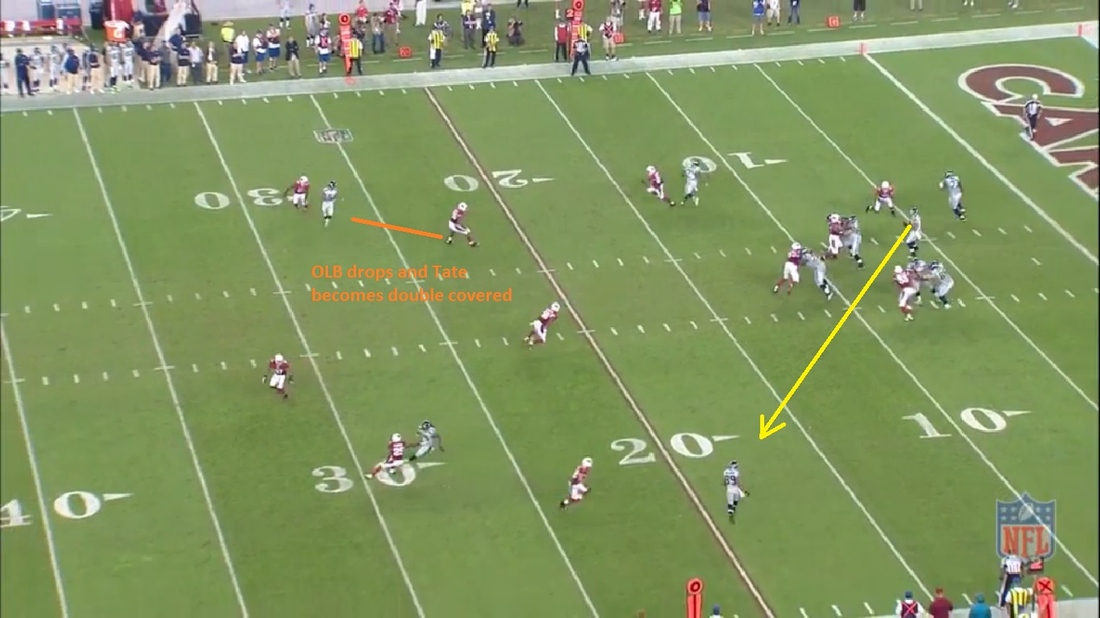 At the same time, note that we are 5 seconds into the pocket and Bowie, the right tackle, has done a decent job in giving Wilson enough time.

In a perfect world, the ball would've been thrown now and the Seahawks would get out of their own endzone and create a easy third down scenario. Instead, maybe for the reason that he trusts Baldwin to stay open, Wilson turns to his right again to see if Tate made his adjustments and to prepare for the checkdown to Turbin, but is interrupted by Shaughnessy who manages to tackle him mid-run.

Ball protection was also not great - I can't get a good pic on it, but it seems that Wilson was trying to switch the hands carrying it so he can stiff arm with his dominant/throwing arm. In the end, a multitude of factors culminate in this turnover. 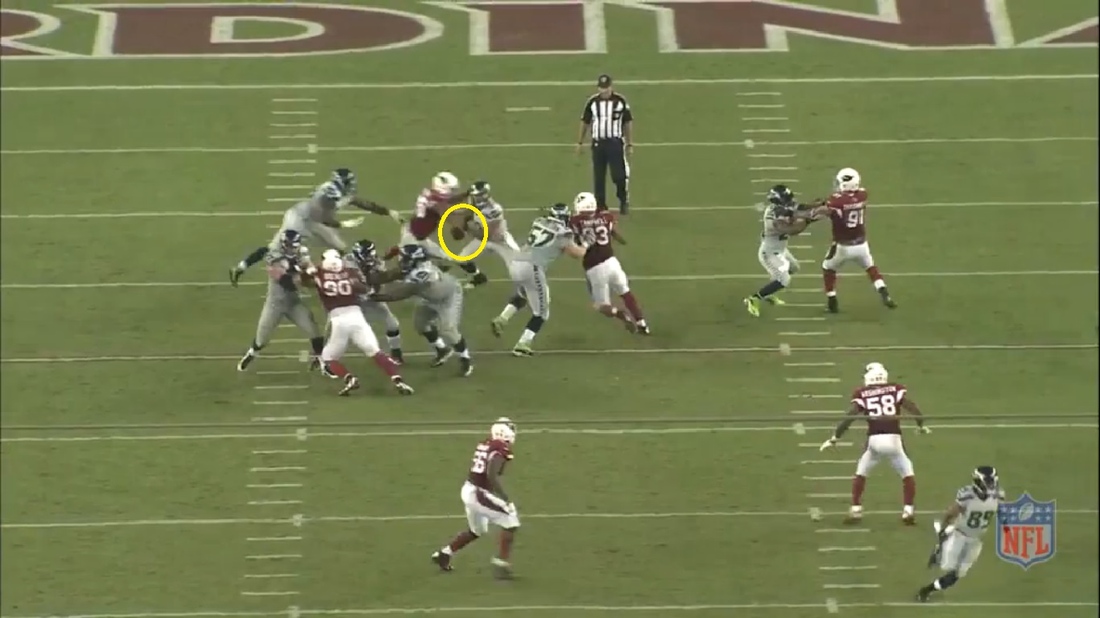 So there you have it. I doubt the problem will be addressed by Monday night (especially considering that the Rams defensive line is that much better), but the most important thing is that it is correctable. The Seahawks offensive line will finally churn out some consistency (playing at St. Louis will be only be the third consecutive time the unit has started the same players) and Wilson, after playing in two games facing consistent pressure, can throw the ball quicker.

Give a big hand to Danny for the GIFs!