This Week In Defense: Seahawks at Texans

Share All sharing options for: This Week In Defense: Seahawks at Texans

Narrative of the game:

The fans were more nervous about the offense than defense heading into this, but after the first half, fans were panicked about both - asking if Seattle was any good. I actually had felt this exact scenerio would occur - in terms of the Texans targeting the linebackers for the Hawks and exploiting that matchup. For the most part, though, it seemed everyone thought Seattle's D would be able to challenge the Texans explosive offense and when that didn't happen, panic set in, which was only compounded by a limited offensive attack.

This play encapsulates perfectly the struggles Seattle had against the Texans' passing game. Pre-snap, Kam Chancellor was down at the line of scrimmage, which is key, because as the play develops and Malcolm Smith attempts to cover Garrett Graham (#88) for the Texans, who had just caught a pass the previous play.

I had my concerns about the coverage execution coming into the game and my fears are realized as Houston's TE's shredded the middle throughout the 2nd Quarter. This particular play though illustrates some confusion - Malcolm Smith's tentative coverage makes it looks like he expects help over the top, and as both Earl Thomas and Pete Carroll confirmed this week, Earl mis-read the play and was way out of position. This is one of the dangers of playing single-high safety. One of the few mistakes that Earl has seemingly made this season early on.

Malcolm and Bobby Wagner both struggled in the second quarter in coverage - I think KJ was on it for most of his match-ups. He's having a nice season in those situations so far.

One of the shockers of this game was the running success that the Texans enjoyed. I had originally felt as though Seattle had to make an adjustment against the Texans blocking schemes in the second half, but with a second look however, the Texans' biggest runs came in the first half, mostly just on poorly timed schematics - one was a cut block play and two were stunt calls, where the Seahawks got themselves out of position against a run. This isn't one of those but it shows how well the Texans execute a big run simply on the miss of just one guy and that's Clinton McDonald.

Clinton McDonald gets penetration on this play but it is all worthless because the Texans have the perfect run call for Seattle's scheme here. Clinton, who has the only real shot at Ben Tate, gets a shove by a Texans linemen as he attempts to adjust. Even without the block it's a hard play to make. Coming off of a screen call, Seattle's defense doesn't really get mauled, they just wind up extremely flat footed here and out of position. Pete and all the players voiced that nothing they struggled with isn't fixable and this is one such play.

It wasn't all great coming out at half. Two big plays - one passing to Owen Daniels and one run by Arian Foster - had Seattle backing up yet again. However, I wanted to make note of this sack by Tony McDaniel for two reasons.

1) Seattle had yet to have any real pressure of Matt Schaub, other than Chris Clemons' early success on the Texans opening drive. Clinton McDonald actually missed a sack here by inches. He flew by so fast he's hard to spot at first because you're looking at Schaub. Of course, he avoids that rush and gets sacked as he tries to scramble.

2) According to the Texans' biggest #1 fan, Tim Ryan, the TE for the Texans was wide open for a TD. A huge impact for Tony McDaniel's first sack. Below you can see the routes developing - the TE on the left does appear to be breaking open as Earl curls in to the play's right. 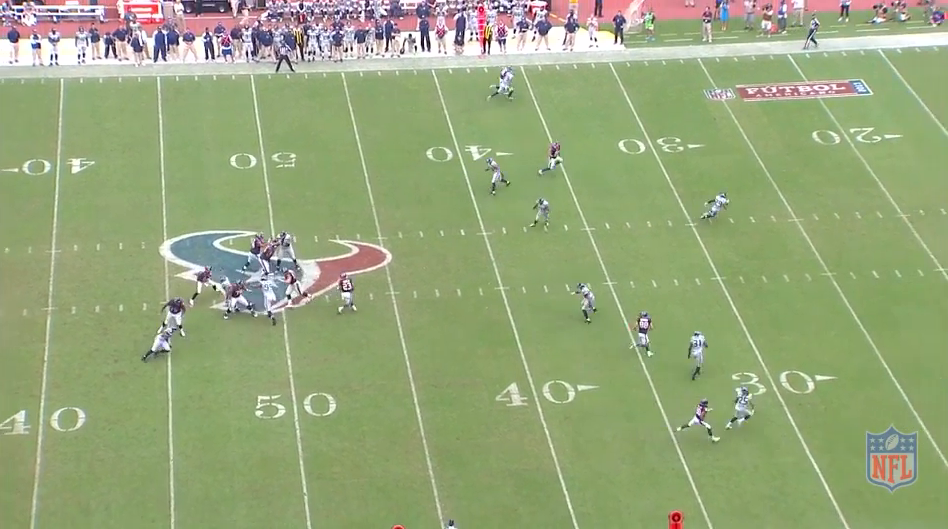 Malcolm Smith forces a fumble. This play is all about effort, with a little bit of luck. The Texans have a stretch run called and Malcolm is matched up on the edge. The effort comes when he is clearly being well blocked at first, but still manages to become involved in the play turning his body with significant effort and getting a swipe on the ball. The kid had a tough game but this fumble helps change field position and Seattle gets a field goal. Recovery and heads up play to Wagner.

One of the things that gets lost in some of the post game discussion here is how many negative runs Houston had in the second half. I love this play by Mebane here because it's very typical. Brandon simply stones his man and then pushes him back and disengages for a tackle for loss.

These plays were huge in forcing Houston to change their play calling and to be completely one dimensional.

Clemons gets a sack. I note this play very specifically because of how Matt Schaub reacted to it. He had a pocket to attempt to step into, but instead he senses the pressure and a tick before Clemons gets there he presents himself like a gift for the sack.

I'm not sure it's related, but it's hard to not go back to the Tony McDaniel sack where Schaub narrowly avoided Clinton McDonald's screaming form - maybe he lacked confidence, but this is the first time I have ever personally seen a QB give himself up for a sack before.

The Seahawks execute a disguised play beautifully. Sherman's pick-six is by design - as Pete says, Dan Quinn designed the call during the week and then called it when they got the formation they wanted.

Sherman hangs in in off coverage and Kam Chancellor and Malcolm Smith apply pressure. How do we know the Seahawks know the play? Kam Chancellor takes a great angle on his pressure, doesn't scrape toward Schaub at the snap instead really waiting for him to come out of the naked bootleg. Schaub, by this point, has no ability to find a receiver or realize that Sherman hasn't gone back in a zone drop. Schaub's throw was really stupid for a multitude of reasons, but props to Seattle for being expertly prepared for it and executing it to a tee.

Cliff Avrill gets a sack. The Seahawks run a stunt with Clint McDonald and Tony McDaniel, the offensive line starts to give way, and Schaub starts to shrink and panic because of McDaniel who is coming free. Avril gets a sack with late surge and the help of some really poor pocket awareness by Schaub. Again, the D-line steps up to re-set the offensive schedule of the texans after a collection of good plays.

The defensive line, as it's done the whole game, bowed its neck on this Clinton McDonald sack. He muscles his way through the left guard and Schaub barely has time to set before he goes down. Clinton's speed is of terrific - note here that he's had better burst and finish than I have ever seen from him since he got here.

A good play followed by a bad play had been, in my opinion, his typical pattern - before his return and subsequent success in Dan Quinn's system. He was a standout for the entire second half and he was still getting great runs up field late into overtime. By the way, though he's credited with the sack, check out Schaub laying down before anyone even gets there.

Texans call a double screen. Cliff Avril stops his rush and jumps to deflect the pass. It's a good call after a sack, playing on the aggressiveness of the Seahawks linemen. I love Avril's discipline though, so many times they charge and then try to knock down the pass, Avril is patient and realizes what's happening and plays this brilliantly.

Overall View of the Game:

As with most games like this, I always feel much better watching with a critical eye and technical approach rather than anger and fanaticism. The linebackers had trouble in coverage for most of the game, but sped up their drops and increased their depth to eliminate some of the throws Matt Schaub had carved them up with.

Seattle didn't really reinvent or make scheme changes. The running game for the Texans wasn't all that consistent and through the entirety of the second half - including overtime - they had two big runs. Only two. However, the first half defense gave up a few big runs because the schemes that were called were perfect for the run the Texans had called - otherwise a lot of runs went for 1-2 yards.

Clinton McDonald probably deserves it with how many impact rushes he had and plays against the run in the second half, but I have to go with the entire defensive line. It just seemed in this game, especially in the second half, like the d-line as a whole bowed it's neck and had negative runs or sacks that stopped drives more often then not.

The defense needs to let plays come to them. A lot of guessing was going on early, and mis-communications seemed all too frequent in the first half. Pete said it was over-trying and I thought it looked over-aggressive. One of my favorite lines that describes this is brought to you by Troy Aikman: "He didn't see what he thought he saw."