Share All sharing options for: Seahawks Replay Booth: Bend them 'til they break - Seattle's 99-yard TD drive vs. Houston

Pete Carroll has consistently emphasized the idea of playing a bend-but-don't-break defense, meaning that the team will allow small gains and first downs, with the secondary keeping everything in front of them, before shutting the offense down in the redzone. In the best-case scenario, end the drive with a turnover or a change of possession. This philosophy has worked wonders for the Seahawks in the past three seasons, and honestly, it's not something new: it's a conservative approach that minimizes the potential for big plays and limits the range of effectiveness within a coach's playbook.

However, when I compare the Seahawks defense with their offense, I find that a lot of their mentalities mirror each other. As Davis Hsu pointed out earlier in the year:

For Pete Carroll, scoring is the most important statistic. I believe this defense is based around four key principals. These were drawn mostly from a presentation from Coach Seto while at USC.

1. Limit Explosive Plays
2. Make the Opponent One-Dimensional
3. Get the Ball
4. Out-hit/Out-physical the Opponent

1. Make Explosive Plays
2. Be Balanced-Never be One-Dimensional
3. Protect the Ball
4. Be Physical

And a lot of what we have seen from the play-calling of Darrell Bevell and Tom Cable has supported that notion. They balance themselves between hitting home runs with fade routes to Sidney Rice and Jermaine Kearse, to short/quick gains or screens with Golden Tate, to feeding the football to Marshawn Lynch and of course, running play-action with Russell Wilson. Oh, and then there's the read-option too.

When you run all these things effectively and consistently, you force the opposing defense to pick their poison. You make them choose between sending the safety down in the box to stack eight men against Lynch or pull a linebacker in coverage so that Zach Miller won't slice you open in centerfield. And finally, when you add all these things together, you bend the defense's composure and will, and you tire them out so much because of all the potential weapons, they break. In this season alone we've seen multiple 90+ yard drives made by the Seahawks in crucial moments, and everything mentioned above has factored to their success.

The following is a brief breakdown of the some of the plays the Seahawks ran en route to their only offensive touchdown scored against Houston:

Houston, knowing that the Seahawks have a long way to go for the first down and backed up in their endzone, stacks nine men in the box to stuff any means of an Marshawn Lynch run. The Seahawks take advantage of this by using play-action, rolling away from J.J. Watt and freezing the three Texans linebackers to create one-on-one matchups on the open field. 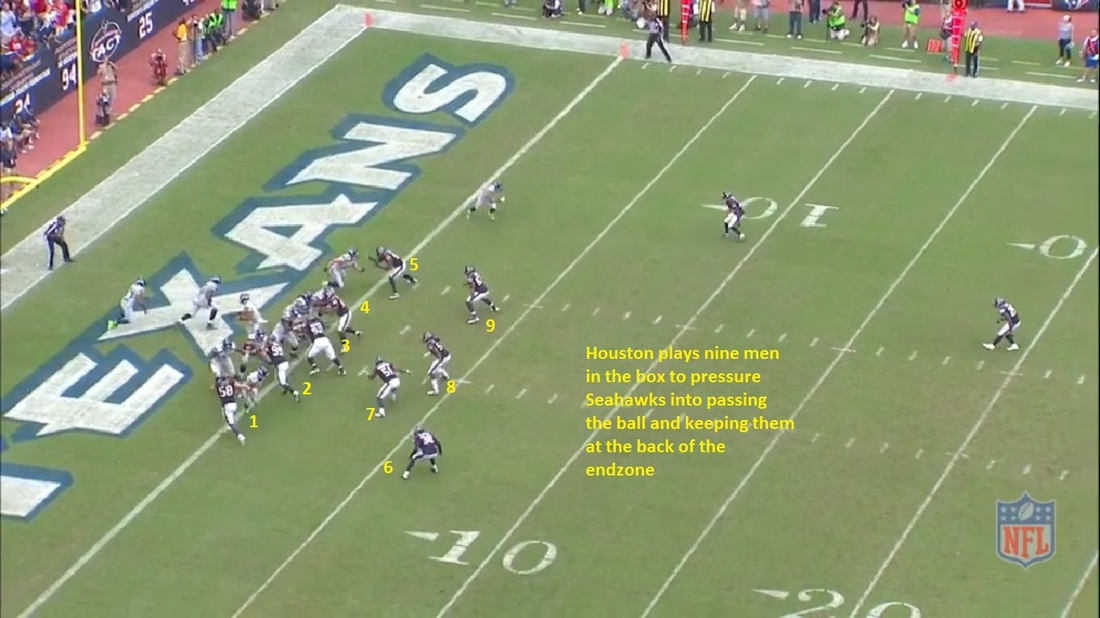 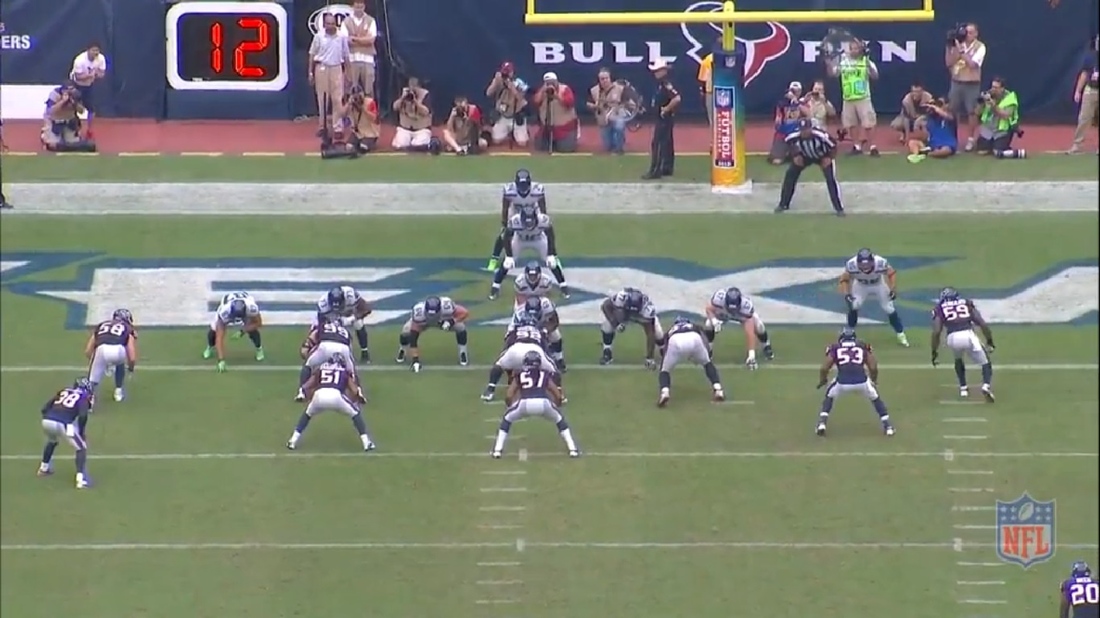 Lynch sets the edge after the fake for good protection and Zach Miller's route effectively forces the strongside linebacker to cover him. This allows the fullback, Derrick Coleman, to slip towards the edge and catch the ball for a short gain. If Jonathan Joseph had not made a picture perfect tackle, Coleman would've had an easy first down. 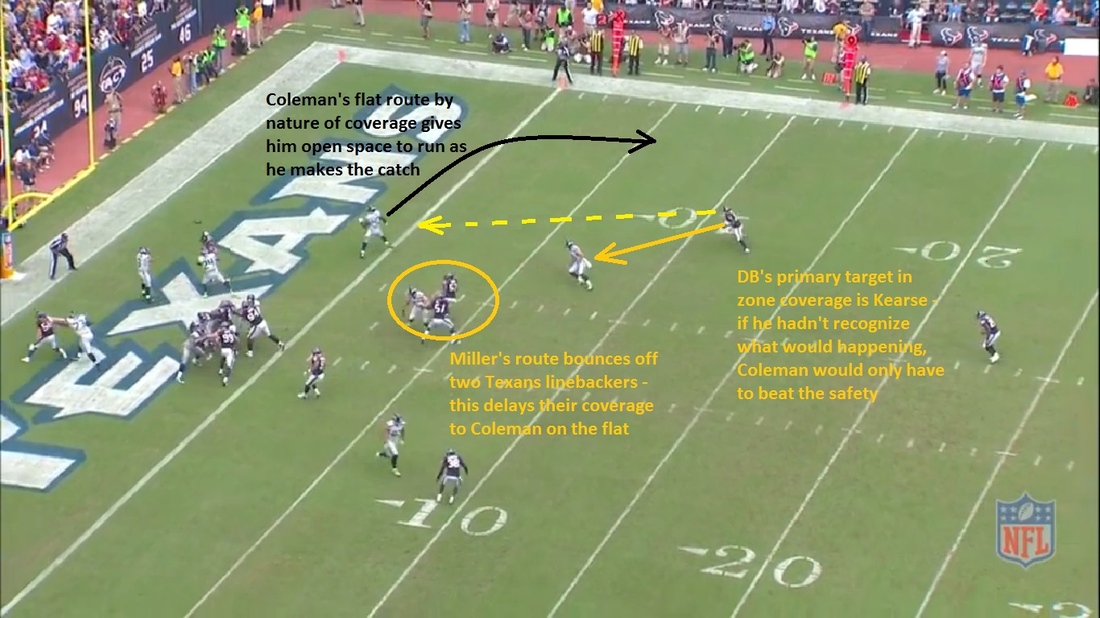 Now that it is third down, the Texans' defense plays conservatively, opening up the formation into a prevent defense and moving their secondary back around the first down marker. Seattle comes out in '11' personnel, shotgun, so Wade Phillips decides to blitz his defensive back and middle linebacker, leaving only five defensive players in coverage. 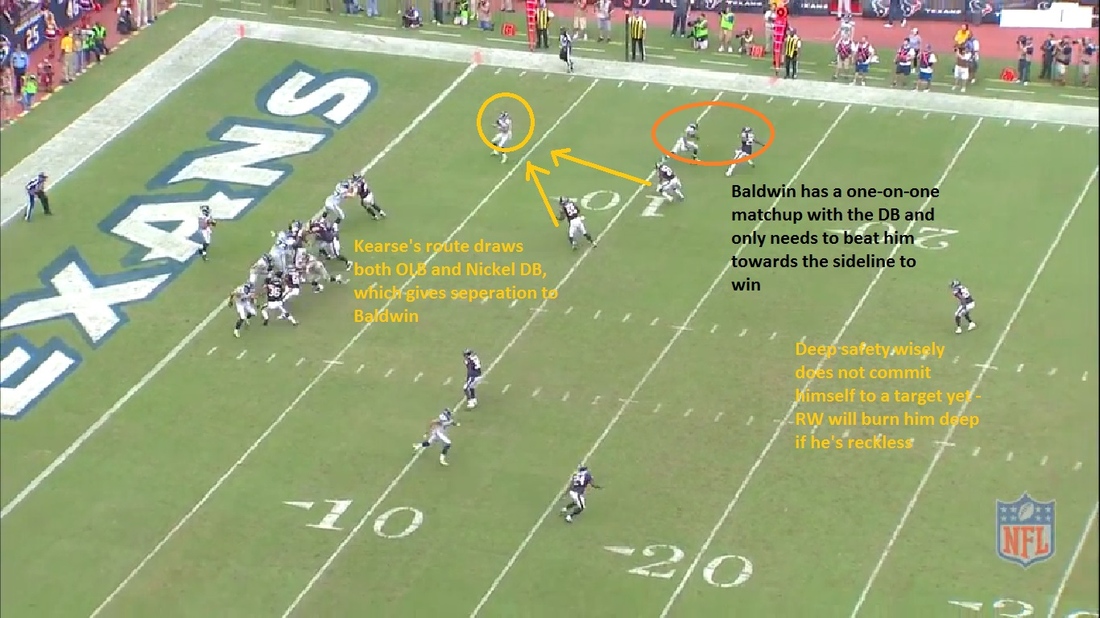 Kearse's fake hitch route draws the attention of both the outside linebacker and nickelback, leaving Doug "Bobby Engram" Baldwin with a one-on-one in a third down situation. What do you think was going to happen?

One amazing thing I've noticed from Bevell's play-action designs is that they always allow an escape lane for Russell Wilson to run away from. As you can see here, the choreographed movements of Coleman and Miller force the linebackers to stay home for a few seconds, and only break away from their main coverage when they realize the two of them are in pass protection. Similarly, Lynch's fake transitions into a flat route to the left side, which the weakside linebacker is force to cover. 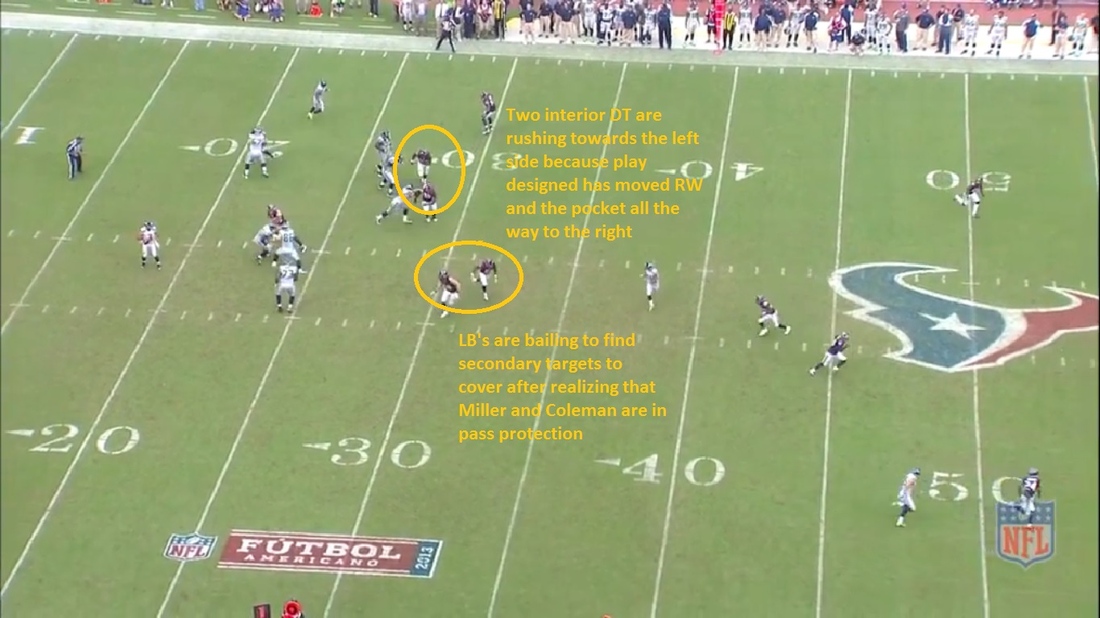 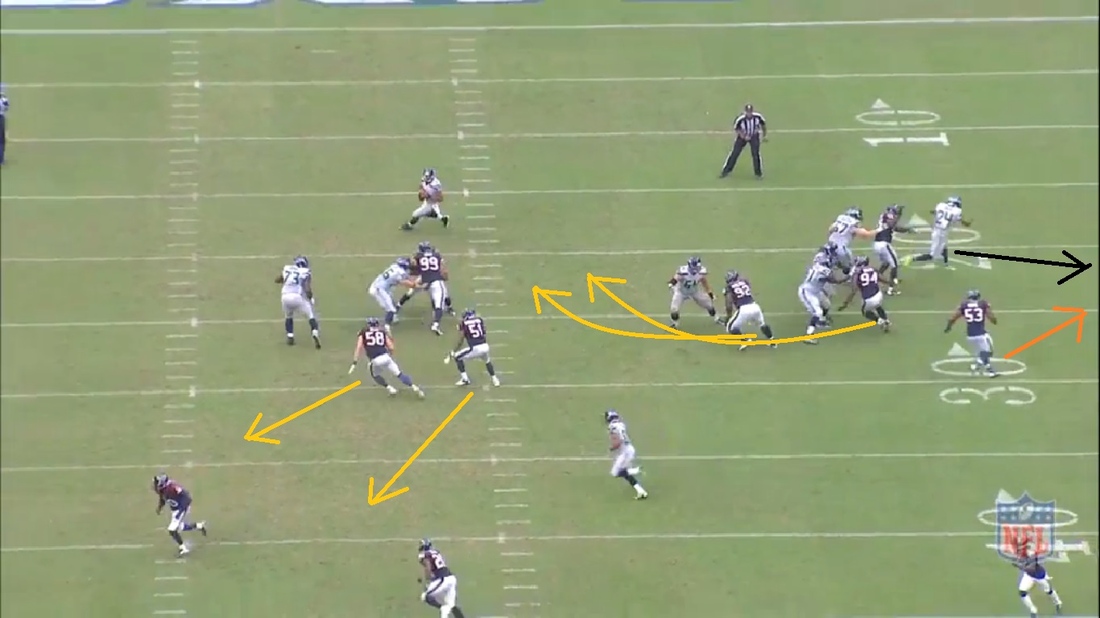 And once the second level of Houston has bailed, it's open space for Wilson to run through. 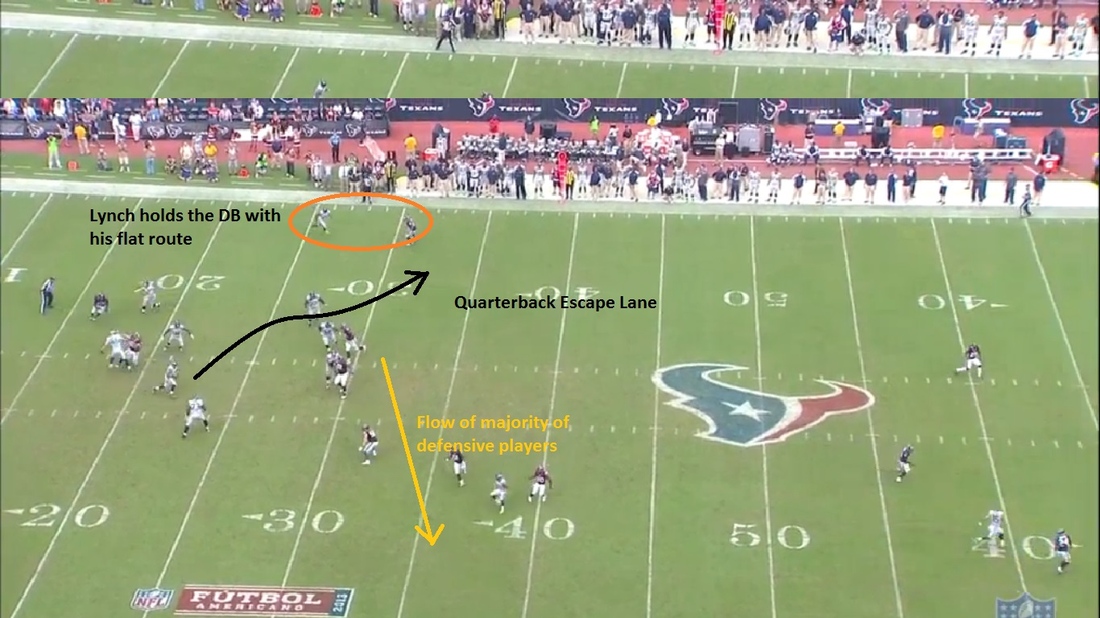 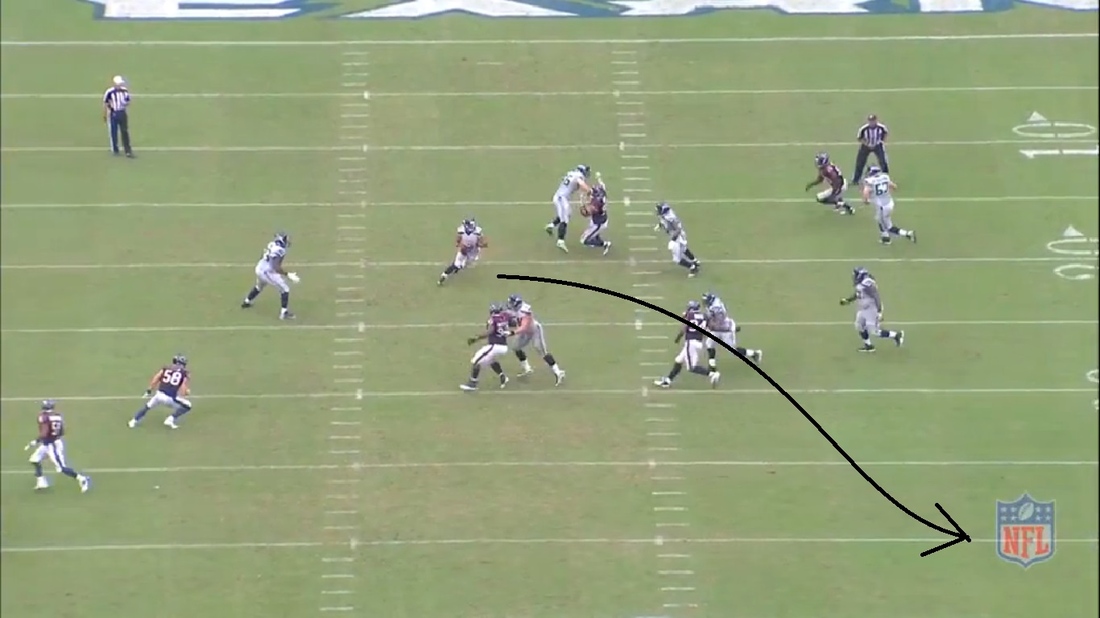 Gut play up the middle with Carpenter pulling and Lynch running right by. Sweezy and the entire right side of the OL do a good enough job to give Beast some room to run.

17 yard run against an eight-men front? Not impossible when you create a misderection run towards the weakside and have the entire OL crash down on the second level. Davis breaks down more on the play here.

We've seen this play before - take the deep fade with the one-on-one when they are focused on Lynch. Zach Miller again runs a route that straight down the middle to draw the attention of the linebackers and the safety. This is what it looked liked last year against New York. Unfortunately Kearse pushed off a little too obviously in this case.

I feel like I'm constantly repeating myself here, but man - just look at the escape lane. 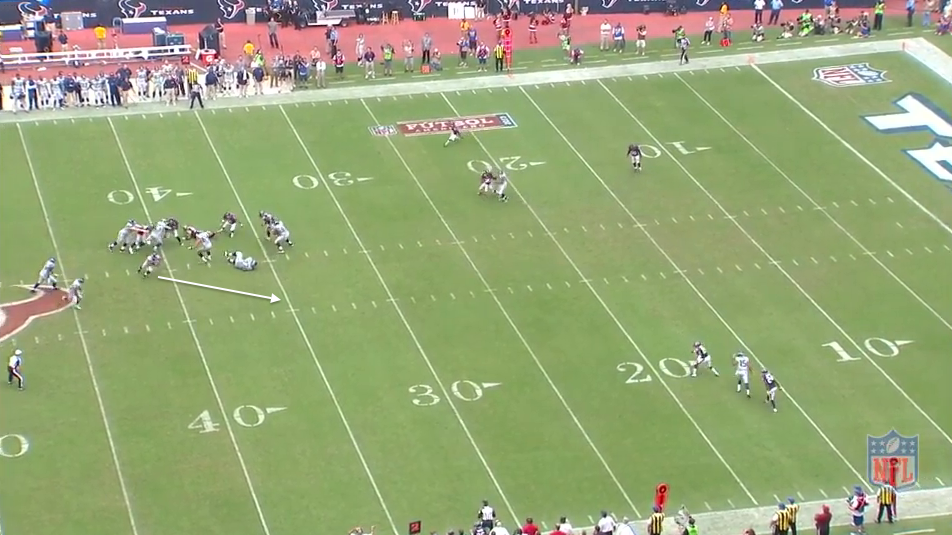 A false start and a sack afterwards moved the Seahawks back to the 28 yard line. Another Wilson scramble and a short pass to Tate bring them to 4th down.

Interestingly, the Texans used a mixture of coverage schemes and pressure to have effectively shutdown play-action had Russell Wilson not been QB. And perhaps this wouldn't have happened if  Zach Miller hadn't made this underrated block.

The cornerback on the far side here - #24 Joseph - slightly strafes towards the middle, and Wilson calls the audible and pitches it the other way when he notices that Houston is poorly aligned on the outside. Perfection.