Share All sharing options for: Jared Allen and The Seahawks City Shuffle

This week, Jared Allen and his Minnesota Vikings have come to tango. As a glass half-full guy, I'm comforted by the fact this represents "lesser" competition. The glass half empty folks may need a bit more persuading. Lets do them a favor, and take a look at a few things we can do to keep #69 from deep sixing us this weekend. Be ye warned, here there be basic conceptual geometry.

In football, there's generally only three ways to get around a blocker. You can go outside, you can go inside, or you can knock him on his back and go right over the top. Allen's forte is his bull-rush, but you don't get to play offensive line in the NFL, even as a backup, if you get knocked off your feet regularly. Allen's going to have to go either inside or outside on the majority of snaps. If we can dictate which direction he choses, we can call plays designed to capitalize on that.

How to bait an inside move
One way to force a pass-rusher to take an inside route is to widen the offensive line splits. In case you didn't know, splits is football speak for "the distance between offensive linemen." Seattle typically plays with tighter splits than league average, because it creates more favorable geometry for frontside double-teams and backside cut-blocks when zone running. 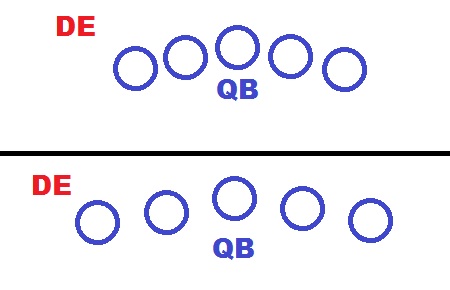 Notice that in the bottom the wider splits force the defender to take a longer path if he wants to go outside. That's why teams generally favor wide splits against speedy edge rushers (think Cameron Wake or Bruce Irvin) who favor the outside speed rush. A wide split combined with a tackle deliberately over-setting the edge is a fantastic method to shut down the outside route, even with a lesser talent at LT. Of course this approach is highly vulnerable to an inside move by the defensive end, but that's precisely what we're trying to make happen.

How to capitalize on an inside move

The easiest way is for Russell Wilson to scramble. Even though the Vikings linebackers suck at coverage, defensive coordinator Alan Williams likes to ask his OLBs to regularly drop into zones and disrupt throwing lanes. A linebacker can't reasonably get that much depth and still be responsible for outside containment on a QB scramble. Dude can't be in two places simultaneously.

No problem. The defensive ends can be responsible for outside containment. But if the DE tries to go inside the offensive tackle, he's lost his ability to defend a QB run. If all this seems a little abstract to you, here's a gif that illustrates what I'm talking about. Watch as veteran LT Jordan Gross shuts down the outside path. The second Jared Allen's helmet crosses from outside of Gross' helmet to inside, he's committed to an inside move, allowing Cam to bounce outside for a chunk of yards and an easy 3rd down conversion.

The Vikings cannot protect against this weakness without making changes to their scheme on a fundamental level. It was an issue for them against the Panthers, and again for them last Thursday against the Redskins.

How to bait an outside move

To bait an outside move, all that Seattle needs to do is run our regular offense. Because they have outside containment, the Vikings DE's will generally favor an outside move whenever they're given a choice. They go inside occasionally (typically signaling a line twist or blitz behind them) but not often.

How to take advantage of an outside move

One of my personal favorite plays is the fake-screen draw. This is one of the only ways I ever got to touch the football on game day (turns out I'm pretty bad at the whole playing-football thing). The defensive end comes rushing up the field. The QB pump-fakes like he's throwing a bubble-screen or a quick slant. The DE puts his arms up to try and bat down the ball, and instead it gets handed off to the RB.

The best thing about this play in particular is how it helps to set up the quick passing game to the outside. A defensive lineman leaping into the air to bat down an imaginary screen pass is as defenseless a player as a WR going up for a catch. Only without all the rules protecting him from really hard hits. Allen can make a business decision and play the draw every time the Seahawks give him this look, but that means he's not getting into the throwing lanes on a screen or quick slant.

One final thing the 'Hawks can do to get after Jared Allen is the play action game. In my first article, I looked at a run-action play where Seattle deliberately left the backside defender unblocked. You can also run-action to his side of the field, which will typically result in him initially trying to anchor against the double team and set the point of attack. By the time he realizes it's a pass, Wilson should have bootlegged out of the pocket to the opposite side of the field. If it's convincing enough, even conventional play action can really mess with a pass rush. When the DE changes from attacking the QB to establishing leverage against the run, he loses his optimal pass-rushing angle and momentum.

It's a they-think, you-think, you-don't-know,
Type of Seahawks City Hustle;
Where you take your time, wait your turn,
and hang them up and out to dry.


*** For the poll below; I personally found the question of how to deal with Kevin Williams the more interesting question. However I was uncertain if anyone would actually READ an article about ways to neutralize an Under-Tackle. The poll's just to help me figure out what sort of stuff I should be writing about in future articles.