Golden Tate's career has been a combination of excitement and frustration. Coming out of Notre Dame, he was known as an incredibly gifted athlete and natural playmaker - a former high school running back that is absurdly hard to tackle and very skilled in going up and getting the football at its highest point. We saw glimpses of this the first three seasons but for whatever reason, he was never really able to put it all together on the field. Drops, mistakes, miscues, whatever it was, it seemed tough to feature him.

Pete Carroll has talked about that this week - something along the lines of: 'we've seen his playmaking ability all along but for a number of reasons it didn't really manifest itself on the field until more recently.' It's been frustrating for me personally because even when you look at some of the plays he made as a rookie, you sit there scratching your head as to why he hasn't been more heavily utilized in the kicking game and in the offense. I think, generally speaking, it's because his amazing plays were always punctuated with needless mistakes and ultimately Seattle didn't feel that they could trust him, but there are surely myriad reasons.

I think the feeling changed some last year when Russell Wilson took over at quarterback and developed trust and chemistry with Tate. The Hawks actively started feeding the former Golden Domer and Tate rose to the occasion, making some huge, tear-inducingly awesome plays along the way (the late six-juke TD vs. Chicago was maybe one of my favorite moments as a fan of all time).

His consistency has improved. His focus and maturity have improved... some. He still has some grimace-inducing moments - like the 40 yard taunt against St. Louis, but in the past couple of games I feel like I'm looking at a different player. In Russell Wilson's words, it looks like he's really lasered-in out there.

It's a small change, and maybe it's a temporary change, but that awesome-but-embarrassing taunting call against the Rams has seemed to change Tate.

He's still one of the most entertaining players to watch in the NFL - I mean, seriously - watch this play from last week - I count 7 or 8 broken tackles, which is awesome....

.... but then watch his reaction at the end of it.

Golden Tate's big-play celebratory reactions are on Russell Wilson dead-eyes level. This is the new Golden Tate. Lasered. In.

Does this represent a turning point for a sometimes-spectacular and somewhere-midlevel NFL receiver to become what we've thought he could become, a top-15, top-10 go-to guy? Well, I'm not saying that, but it sure felt like Tate was becoming a star in front of our eyes on Sunday when he made a one-handed grab in the corner of the endzone. (I only say that again because that was my actual in-game reaction at the time).

I wasn't the only one with that reaction. 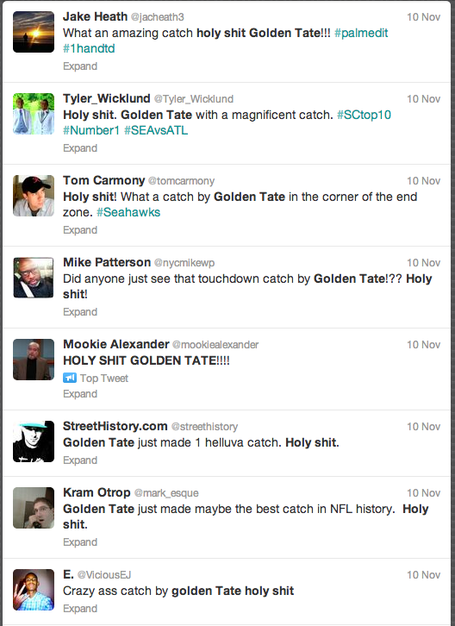 We'll get to that specific play, but I really wanted to break down some of the ways that Tate impacted the game on Sunday against the Falcons. To the tape!

Early in the game, Seattle leads 3-0 but are backed up into their own end (because Tate mistakenly allowed the punt to land, rather than fielding it, and it bounced to 7 yard line). After a run on first down set up 2nd and 8, Tate makes up for his mistake.

First off - I believe this was an audibled/sight adjusted throw by Wilson based on the coverage. With two receivers to the left, the Falcons are probably thinking Seattle goes for the sticks here with short routes - and they bring their free safety down and to that side. Wilson signals something just prior to the snap and then quickly makes this throw on a five-step drop. He throws in rhythm when he hits his back foot. This is a good example of that expression, if you've heard it being bandied about. The timing is important because Wilson is hit as he throws.

As for Tate - watch his release. His quick stutter step/juke to the outside gets Asante Samuel to open his hips with inside leverage, and Tate takes advantage. Among players, getting the corner to open his hips like this is is referred to as getting them to 'open the gate'.

Tate is hit in the head by William Moore, who is clearly leading with his helmet, and gets 15 yards tacked on. Tate's  'ho-hum hi there I'm an innocent child' reaction to Moore's protesting is priceless.

I like this look. It's a bunch formation out of the huddle with two tight ends and Tate, and prior to the snap, Tate motions out to the wing. Wilson hits Tate quickly, and the two tight ends in the bunch then act as lead blockers on the outside.

Both Zach Miller and Luke Willson make great blocks at the point of attack and Tate's speed becomes apparent.

This is the kind of thing that players like Golden Tate and eventually Percy Harvin can do for you - get explosive plays from seemingly 'safe' throws like this quick bubble. Obviously, we know that Wilson can make throws downfield, as seen above, but being able to get explosives from multiple levels and in different styles is exciting.

I don't even care anymore, Golden. Keep fielding that shit from inside the ten yard line.

Field flipped with 1:16 remaining in the half. This set the stage to help Seattle push their first-half lead to 23-6. Let's not get ahead of ourselves though, Tate still had to make this play.

There's not a ton to break down about this play - the Falcons come with an all-out blitz - seven guys, and Russell puts the ball exactly where he needed to. Dime. Tate makes a fantastic play.