All That Is Gold: A kick to the not-sack

Share All sharing options for: All That Is Gold: A kick to the not-sack

I almost chose a different topic for this week's article. Mostly because every time I said "I really like that play" while watching live, it ended up going for about 8 billion yards. It wasn't easy... but I managed to find two really good plays that didn't produce spectacular results. Hope you enjoy!

The first play I'd like to look at comes with 7:09 left in the 1st Quarter. The play before this one, the Vikings had just converted a 3rd and 4 by pounding Toby Gerhart into a 9-man box for 6 yards. If I was writing for The Daily Norseman, you better believe that's a play I'd highlight. There aren't many coaches in the league with enough guts to run their backup RB on 3rd and 4 against the 'Hawks defense, much less when the starter is AP and the box is stacked!

I've drawn up the play-art below. As a disclaimer; I don't have Game Rewind. I was forced to guess somewhat on the WR routes. I'd personally have drawn this play up with a deep-out on the left and a fly on the right, although that's probably not what was run. 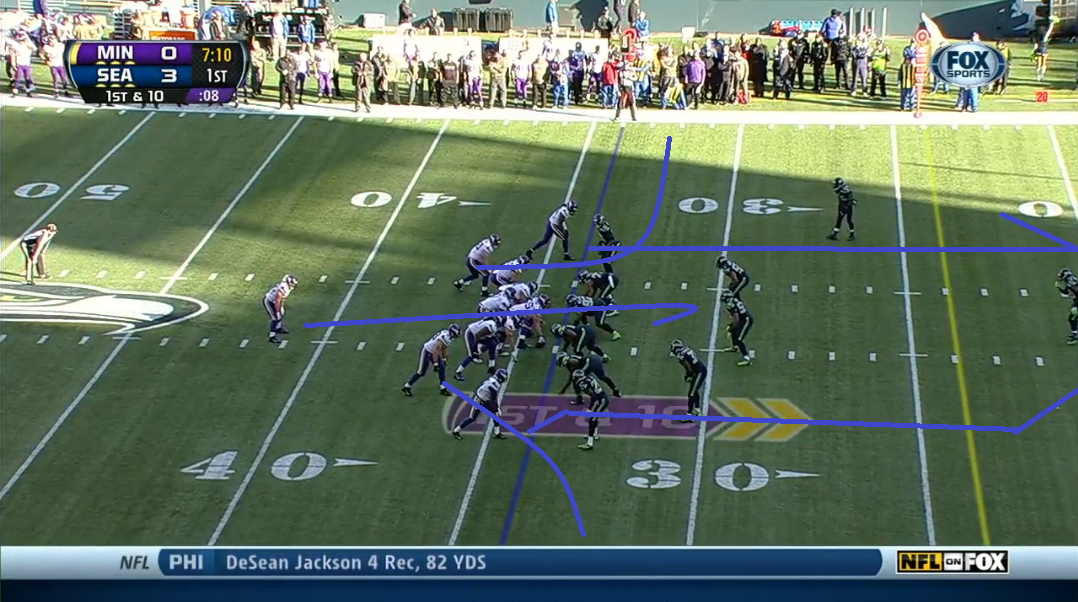 One of the reasons that teams script the opening plays of the game is they want to see how the opposing defense and individual players are going to handle situations and personnel packages.

With this play, it's actively asking the Seahawks how they plan to play coverage if they blitz Bruce Irvin. The horizontal stretch underneath makes the simplest solution (Wagner picks up the flat zone) impossible. The TE will handily beat him to the spot. If the seahawks try to rotate coverage behind the blitz (diagrammed below) they're letting both WR's run deep routes against single coverage. Even with the Seahawks secondary, that's not something you want to be doing regularly. 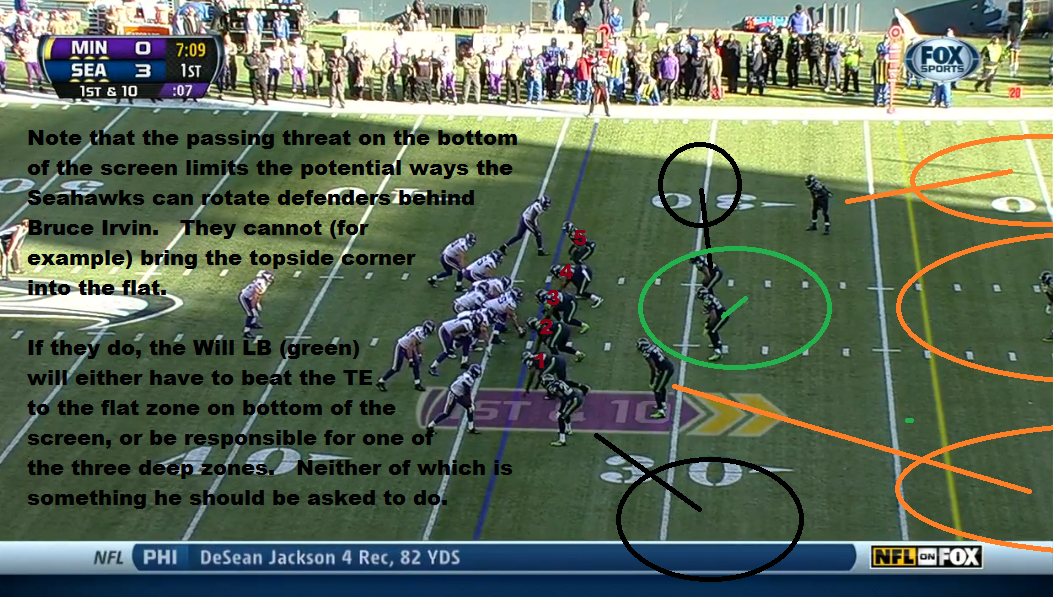 If the Seahawks don't blitz (they didn't), the TE gets a 1-on-1 matchup with Bruce Irvin, almost regardless of the defensive coverage. Even with some film to look at, I'm sure the Panthers wanted to see how the former DE looked trying to match a TE in space. That's a matchup every team is going to tinker with because it's potentially quite favorable. 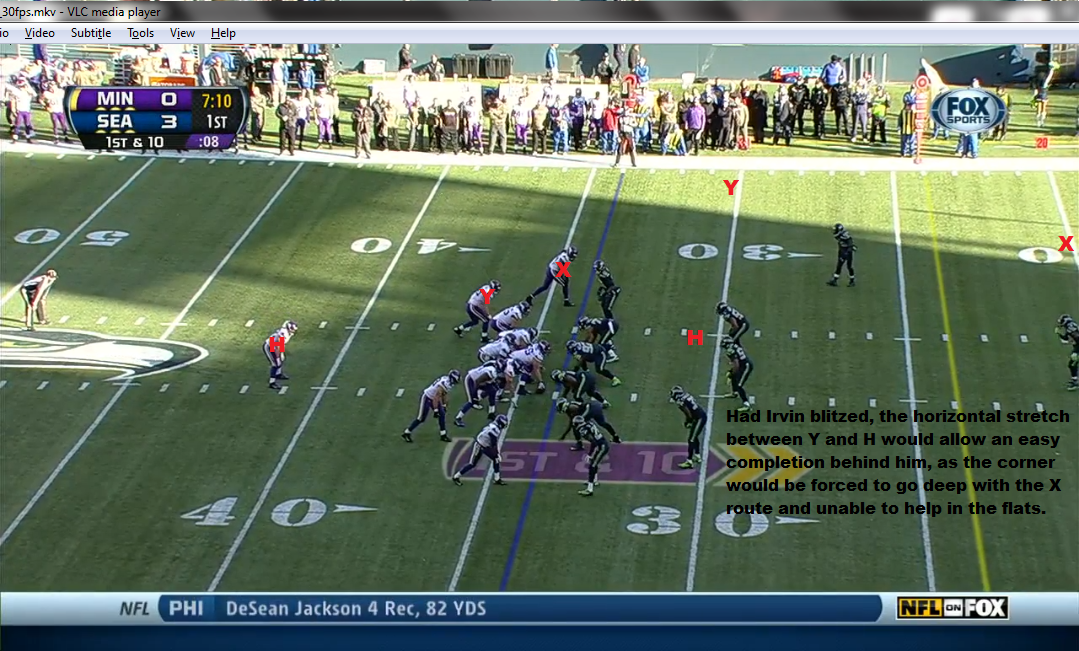 The defensive playcall was a relatively vanilla Cover-3 shell. What I really wanted to highlight on this play is the play in the trenches. 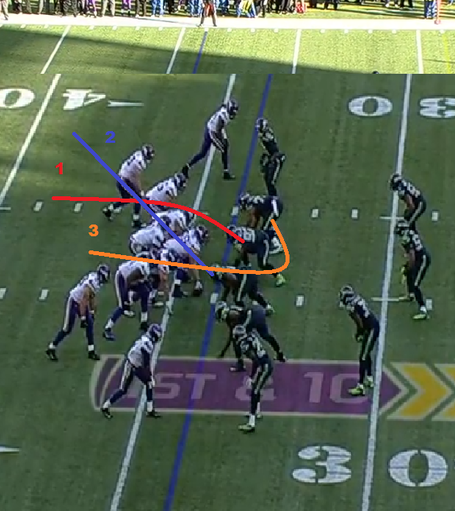 As seen on the game broadcast, the LT points to Irvin pre-snap, and the C points to Bobby Wagner. The former is to communicate that if Michael Bennett and Irvin both come, the LT is going to pick up Bruce. The latter is to highlight Wagner as the "Mike" player. In pass protection this is not synonymous with Mike linebacker. On this specific play, it means that if he Wagner blitzes, the center is going to pass off Mebane to one of the guards and pick up the blitz.

As the play art illustrates, the Seahawks are running a very interesting twist at the line. It starts with Bruce Irvin, who shoulder-fakes the blitz right at the snap. The LT moves into position to pick up the imaginary blitz, and is out of the play completely.

Mebane takes a slant to the defensive right (1). His goal is to get into the A gap and force a double team from the center and guard. Clinton McDonald will work his way behind the double team, pulling the RG across the hole. This is highly unusual, and serves both to disguise Seattle's play, as well as to functionally keep the center from interfering with the play by putting the RG in his way.

The DE on the left (Michael Bennett) is going to loop in behind Mebane but in front of McDonald. If everything goes as it's draw up, there should be nobody in the area free to block him. Maybe you'll see an RB there. But that's a 1 on 1 that Bennett is expected to win easily and reliably.

Now that we know how it's drawn up, let's take a look at what actually happened.

You can see the twist works to perfection. Bennett uses the chip-block from the TE to redirect his momentum inside. Nobody on the entire offense had a prayer of stopping him.  If he was faster (there's a reason we often use Irvin for this sort of thing) he'd have an easy sack. It's Mebane that gets there first, right through the double team. 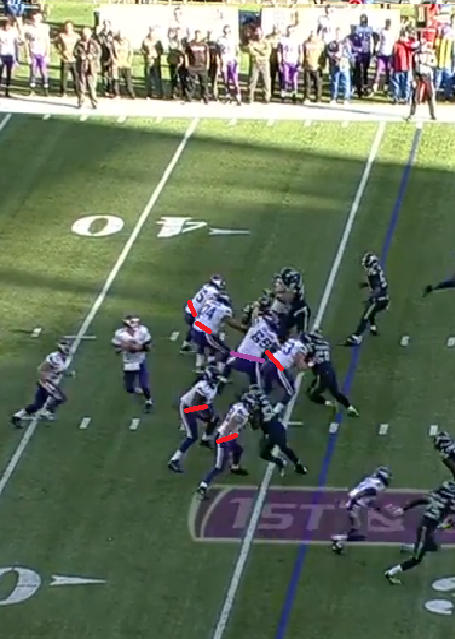 Notice the center's hips are almost completely perpendicular to to the line of scrimmage in the picture above. That's a really bad sign, as it means the blocker in question got beat to the outside. Mebane used some lateral quickness and a decisive rip to win the hand-fighting, and got right through the double team before the guard even had a chance to help.

When Dan Quinn was first hired to replace Gus Bradley, the scouting report on Quinn was that he favored highly active line play. This is a great example, rolling the dice on a 1st and 10 twist. Had the Vikings called a power-run to the left side, the twist would have looked very foolish. Instead, 'Bane split his doubleteam and Bennett ended up coming untouched up the A gap behind him.

"You know my pops used to say it must be jelly 'cause jam doesn't shake like that."

The other play we're going to look at came with 2:10 left in the first quarter. The score at this point was 3-3 and the 'Hawks had a 1st and 10 at the 22 yard line. Seattle lines up with the 'jumbo' 22 package (two backs, two tight ends), with Doug Baldwin as the lone WR split far left. The Vikings counter with their base 4-3 but stick 9 guys in the box and leave the free-safety covering center field.

Pre-snap the 'Hawks motion Marshawn Lynch out wide right. Based on how the Vikings shift defensively, it sure looks like they're playing man-free with a strongside blitz. Here's the hawks play: 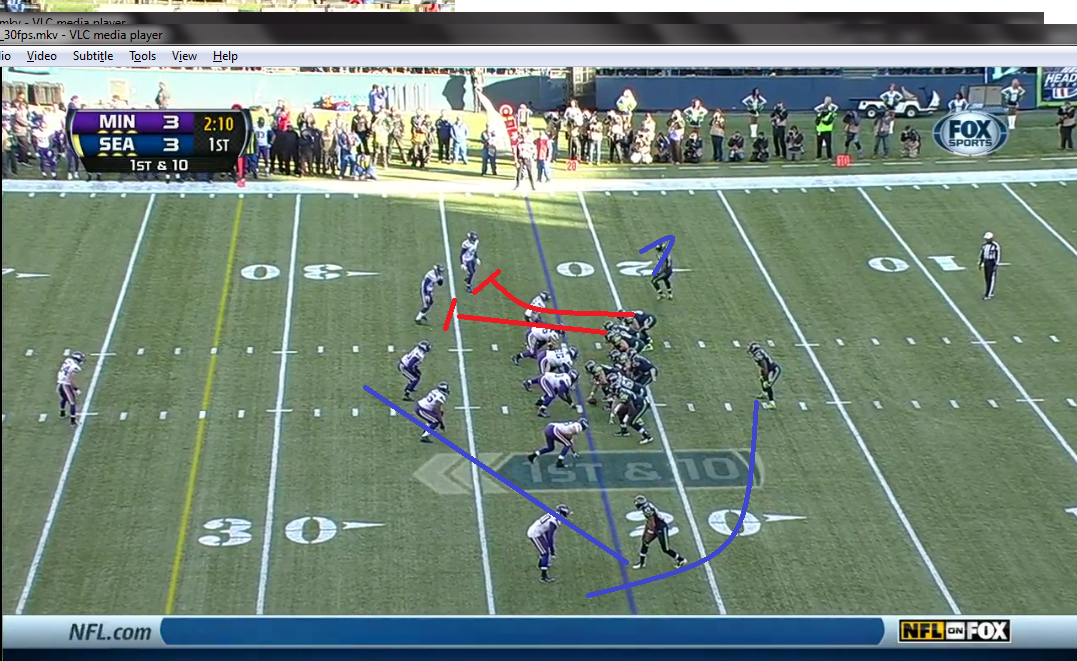 The screen to Marshawn is the primary read, and will be thrown about 9 times out of 10, regardless of coverage.

In man, it's irresponsibly stupid for the corner to try and jump the screen, because if he guesses wrong it's a really easy TD. In zone, 3-4 yards behind the line of scrimmage is virtually always in the no-cover zone. It's only if the DE or LB gets into the throwing lane that Russell Wilson should go elsewhere.

If that happens, he'll turn to the other side of the field and key the 'backer to that side. That LB can either get underneath the slant to Baldwin, or move into the flat to cover Mike Robinson. The ball goes hot to whomever the 'backer isn't defending.

Things to notice as you're watching these GIFs:

1, J.R. Sweezy lands a picture perfect cut-block on #96 to take him out of the play. It takes an uncommon amount of athleticism to get on the edge that quickly and into the DE's legs. If you're one of the people wondering what Sweezy brings to the table, this is it. No way any other guard on our roster even comes close to landing this block.

2, Kellen Davis does a fantastic job getting to the corner before he can come up and make a play on Lynch. I'd personally rather see him drive the defender to the sideline. But it's possible (probable) that he was coached to square the CB up and give Lynch a 2-way go.

3, Zach Miller really screwed the pooch on this play, and is the reason why it went for 2 yards instead of a whole lot more. Miller is usually a dominant blocker, so I was quite surprised to see him being shoved 3 yards into the backfield by Chad Greenway (52).

4, The reason this is bad is because it forces Breno Giacomini to run the long-way around them. Consequently he isn't able to block the SS Jamarca Sanford (33). If he's able to run directly to the point of attack he probably makes that block. At worst, he's almost certainly on time to keep Erin Henderson from cleaning up the tackle.

Overall, I really like the design of thisplay. Unfortunately our execution was just a little bit off. Had everything gone according to script, we'd have Lynch one on one with a free safety and some room to operate. That's going to favor the 'Hawks every time. I also like the 1-look read on the backside to gain 3-4 yards if the primary gets blown up.

You'll notice the Vikings left two cornerbacks in the game, even though we only had 1 WR. By throwing the ball, we're reinforcing the need to leave a full set of defensive backs on the field. Any future opponents who see this and send out the base defense will be voluntarily giving us a personnel mismatch in the running game that we can exploit should we get it during a high-leverage situation.