Once again, showing the importance and effectiveness of one-on-one matchups.

Like many of you, I was very grateful and pleased to read about Danny and Davis's piece regarding the balance that Pete Carroll strives for his team on offense. I felt compelled to share some of my own thoughts on the piece as well, so consider this post as a supplement to the hard work the boss man and Davis have provided.

Now, as the big man said himself, maintaining this philosophy is the "most consistent, proven championship formula in the history of this game," and one of the reasons why is that it provides them with "more ways to win a football game and [maximizing] our chance to keep winning and stay on top." When you run as much as you pass, defenses aren't allowed to cheat as easily and will have to adjust on the fly more frequently. As you saw in the post above, the Minnesota Vikings were burnt both when they tried to stack the box with eight men or drop an extra guy into deep coverage.

Then of course, you create even more flexibility with a hybrid player like Percy Harvin or Golden Tate, who opens you up to even more formations and plays and somewhat disregards the standard restraints of specific personnel groupings (more on that later). And when all these factors add up it leads to the two most important things Carroll wants in his offense: to a) provide as many explosive plays as possible, and b) be as physical as you can in the game.

Of course, game-planning and drawing all this stuff up is one thing; translating it into the field is another. Carroll and the rest of his staff definitely deserve props for outlining everything out. But in my mind, it doesn't matter what happens if the quarterback - or someone on the offense - doesn't see it or doesn't take advantage of the situation. Field Gulls commentator Bobby Cink mentioned how "Any defense that stacks eight on us is going to really struggle. Hopefully Wilson is going to have the freedom/wits to audible out of a run play against an eight man box and into something else."

First, let's look at the pre-snap formation. The Seahawks come out in 22 personnel - Marshawn Lynch and Michael Robinson in the backfield, Luke Willson and Zach Miller on the right. The Vikings respond to this run heavy set with a nine-man front. This is a reasonable counter. After all, four out of the five receiving targets are bunched up together, you might as well stack everyone in the box right? 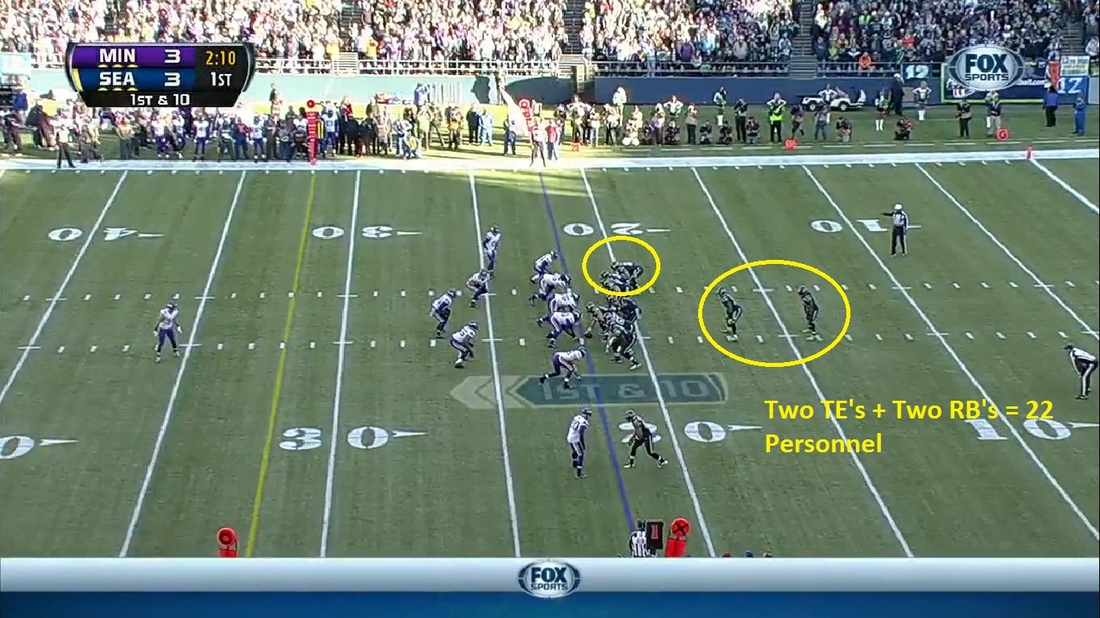 When the defense drops another player or two into the box, the pass game can take advantage of 7- or 8-man fronts with Redline throws. Wilson is not afraid to challenge one-on-one matchups, and Seattle has specifically accumulated receivers that win in one-on-one.

Weather or not this was an audible or not, Wilson sees the cheat and calls his motion, moving Lynch out wide and "shifting" the 22 personnel into a de facto 12 look (1RB/2TE/2WR). By motioning Lynch out wide, Wilson effectively changes the call to a definite pass (as good as Michael Robinson is, it would be foolish to respect him as a legitimate runner). 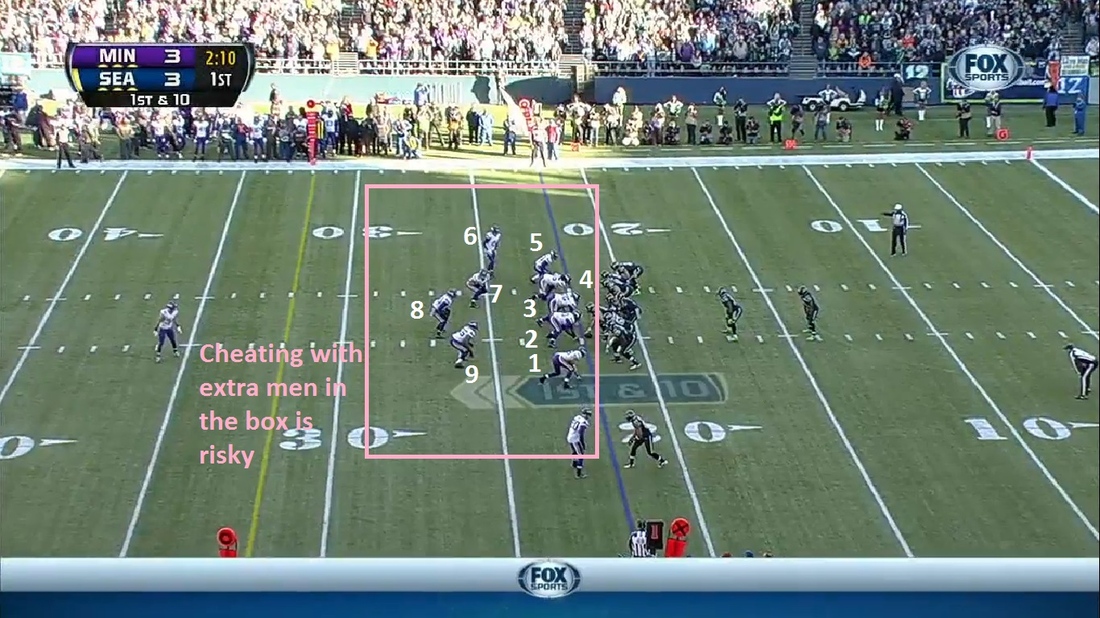 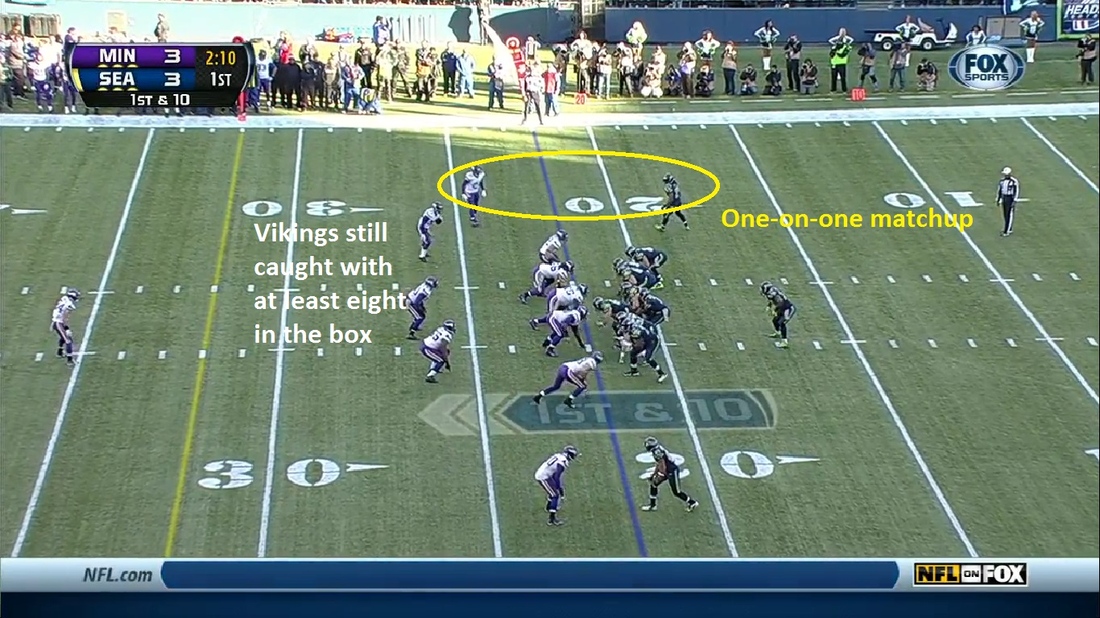 With all this commotion going on, the Vikings send out one lone player to compensate, leaving Lynch one-on-one with the cornerback. Wilson takes advantage accordingly:

Granted, it's not technically a Redline throw as Danny describes, but it does create a matchup that Lynch could theoretically beat easily - notice all the ground that separates the DB and his safety. Even if Zach Miller and Breno Giacomini had better blocks, Brian Sanford makes a good open space tackle to snuff out the mistake quickly.

Here's another one. This time, the Seahawks come out in 12 personnel. Doesn't look like it, huh? That's because the TE Willson is hiding out at WR - so much so that defense are caught off guard and the DB is sent in late to cover: 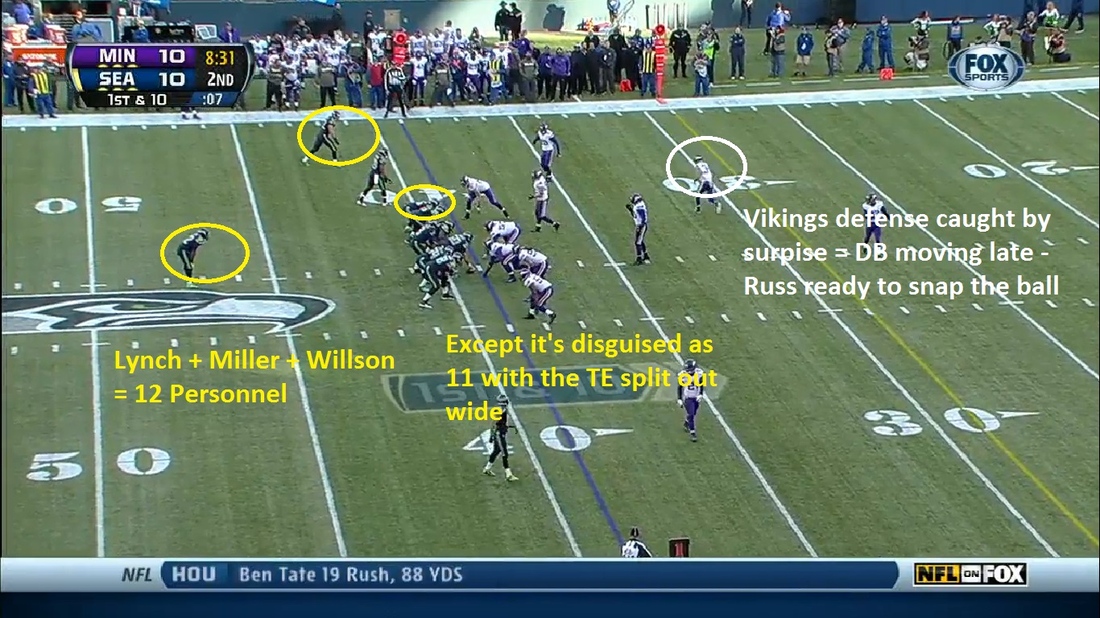 And then right when the defense is seemingly in position - wham, Willson moves again. This time, he ends up as the fullback, setting up what appears to be a run play. Again, it;'s still 12 personnel but it looks like 21 personnel with the I-Left formation.The Vikings, already with seven men in the box before the snap, buy it. 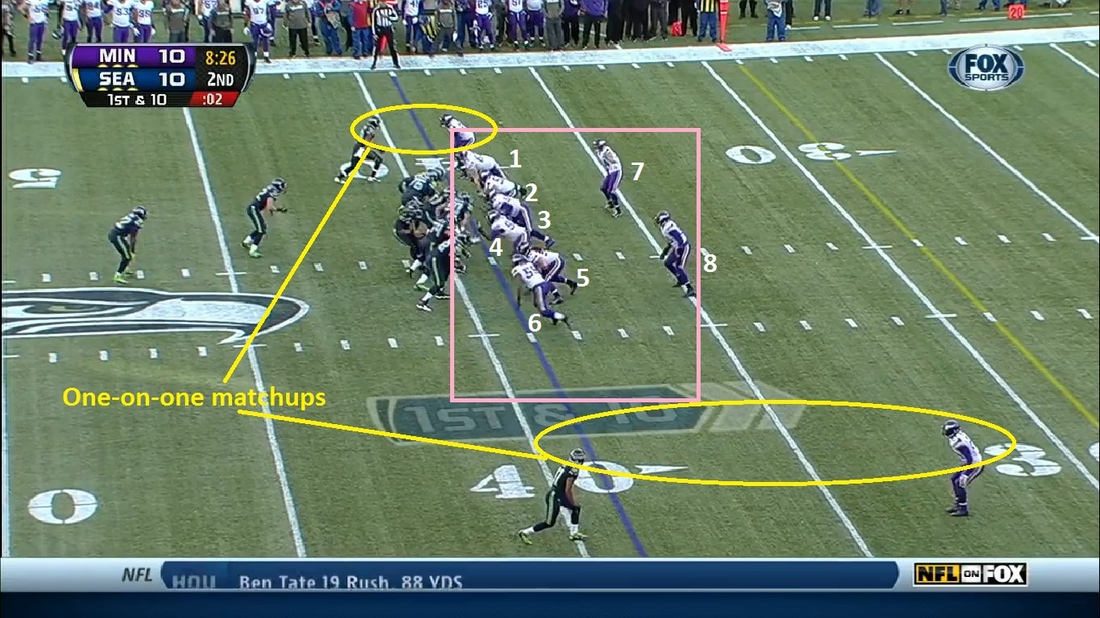 Cool, the offense will just run play-action and take advantage of the one-on-one matchups. Again.