Frank Gore's game-altering 51-yard run came at the 4:21 mark of the fourth quarter and started at San Francisco's 31 yard line. Prior to the play, the Niners had rushed 26 times for 98 yards at a 3.7 yard per carry clip, and Seattle had put themselves in a nice position to get the win. At the time, the Hawks were up one point and looking to make a stop - force a punt or turnover - get the ball back, and run out the clock. Of course, that did not happen, to everyone's everlasting chagrin.

Jim Harbaugh explained after the game that the Gore run playcall was something they'd been saving for a rainy day.

"G-Ro (49ers OC Greg Roman) had been saving that call in his back pocket and picked the exact right time to call it. And Frank executed it."

For what it's worth, both Craig Johnstone and Pete Carroll agreed that the idea this play was 'new' was a bit silly - Carroll scoffed at this in his radio show yesterday - evidently meaning it was just a tweak on a long-standing bread and butter play for the Niners. I don't know either way, probably semantics. Who cares. It worked really well.

"My O-line did a great job - O-line and receivers. When I saw the hole, I kind of knew (safety Earl Thomas) - he's so fast to the ball, I kind of knew he was going to overrun it. So I kind of set him outside and then broke him back in because he's so aggressive."

This is true. Not only did Earl Thomas overrun the play, but it looked like Kam Chancellor did so as well, and Malcolm Smith, filling in for K.J. Wright, took a bad underneath angle to cut off Gore's route. After Gore hit the second level, he cut right, across the grain, and a hold by TE Vernon Davis on Richard Sherman allowed the Niner running back to get back outside on the backside. Of course, all this came after Gore was able to get past the line of scrimmage with some great blocking up front by the Niners.

Here is Pete Carroll's explanation of what happened:

"We just over ran it, just over ran the tackle. A number of guys had a chance. Kam had a real shot at it, but floated over the top of the run. Earl had a shot at it as it came back underneath, and it got back all the way to Sherm. Sherm got nicked by a blocker and just didn't get off of it cleanly and [Gore] took off and hit it.

"We were going this way and he was going that way. So they blocked it well up front, but we had plenty of shots to keep it to an 8 to 9-yard gain. That's what we needed to do, and unfortunately, it got out. They took full advantage of it. He hit it just right and it was a nice play by them."

"Sherm got nicked by a blocker and just didn't get off of it cleanly". Carroll used the exact expression 'nicked' in two separate interviews. Now we know that 'nicked' means 'held' in the Pete Carroll lexicon. It's easy to get frustrated that Vernon Davis was not called for a hold on Richard Sherman, but while it was obviously impactful to this play, it's arguable that three or four other guys should have done their jobs properly before it got to the point where Sherman was supposed to be forcing the ball back inside.

Let's take a look-see, shall we?

From the sideline broadcast view, the major points of emphasis are:

1. Chancellor and Wagner are in the same gap, pretty much on top of each other. I don't know who screwed this up, but they way they're spaced is not right. (It looks like Chancellor thought the play was going outside and guessed wrong).

2. Smith sees the block (from pulling right guard) coming into the second level and tries to go under it rather than over. This is unfortunate. I don't know how he'd be coached in this situation because that's a tough one, but once he's 'under' the pulling right guard, he's easily blocked out of the play. My guess is that he should have stacked the guard (got his hands into him with extended arms, with his eyes in the backfield), then shed him, depending on which way Gore ran. Obviously this is easier said than done, but considering Malcolm took the blame for the big gain after the game, he seems to think he should have played it differently.

3. Earl's downhill run support is uncharacteristically poor here. It's tough to run straight at a running back that has open field to his right and left and make a tackle, but that's what we're used to seeing Earl do. In this case, he gets caught flat-footed and Gore runs past him.

4. Sherman is the force player on the outside and while he'd not normally be involved with a run up the gut like this, when Gore makes his cut back outside, Sherman has a shot at either tackling him for a 9- or 10-yard gain, or forcing Gore to run back upfield, which would likely result in him running right into Earl. Of course, Sherman can do neither because he's held up. With no help from Sherman on the edge, Gore gets past Earl. Picks up 51 yards.

From the overhead angle, you can better see what happened in the trenches. 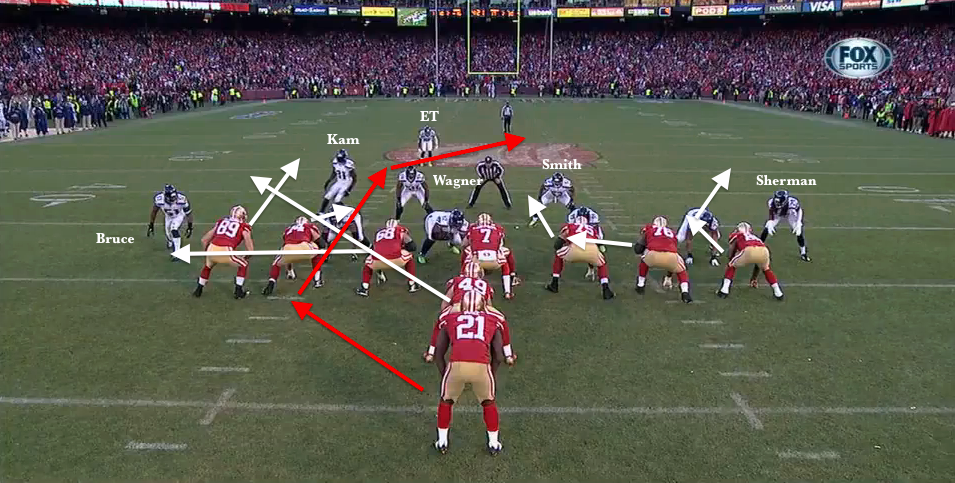 The key block at the point of attack is on Red Bryant, who gets pinched by the left tackle as Bryant looks to penetrate. This is huge.

After the game, Red mentioned that:

"They had a perfect call against the particular defense we happened to be running."

I think what Bryant means that if he'd been doing what he normally does, ie, two-gapping in a wait-and-see approach, holding the line and flowing with the direction of the offense, instead of attacking upfield through the B gap as you can see him doing below, then Gore wouldn't have had the gaping hole to run through that he did. Because Bryant attacked upfield, he was hooked easily by LT Joe Staley, and that created a big running lane.

The overhead angle also shows how Chancellor and Wagner stack each other in the same gap. This makes the downfield-blocking tight end and fullback's job too easy.

Bummer of a play. Even more of a bummer that the Niners got the subsequent first down on the keeper Power-O run by Colin Kaepernick, and ran the clock down to 26 seconds before kicking the game-winning field goal.

Ultimately, a very good play by the Niners, in which they took advantage of great blocking up front and some blunders in the defensive secondary. An apparently subtle-enough hold on the backside sprung Gore, but he might've been gone anyway. Tough to know. I would say that most of the time you see huge gains in the ground game like this at the NFL level, it's because you have multiple breakdowns from the defense. In this case, that's true.