How Earl Thomas and the Seahawks' defense use the Cover-3

"We didn't do anything special" - Pete Carroll, on his defense's impressive performance against the Saints.

Share All sharing options for: How Earl Thomas and the Seahawks' defense use the Cover-3

If you'd simply took at snapshot of any particular play on the Seahawks defense, chances are you'll see Earl Thomas roaming around deep in the secondary all by himself. Now, this may seem counter-intuitive, considering that NFL offenses have transitioned to a point where they want to beat you with the middle of the field, but consider that Pete Carroll's number one defensive philosophy is to stop the run. This aspect is so important to him that he's willing to frequently move the strong safety, Kam Chancellor, down inside to create an eight man box.

Of course, this creates a lot of potential open spaces for wide receivers to exploit, and thus it is just as important that Carroll implements a good scheme to play off of the run focus he emphasized early on.  The funny thing, though, is that he manages to do this with one of the more basic defensive schemes in the field in the Cover 3 scheme, or as Matt Bowen puts it, "a defense taught at the high school level that is still prevalent on Sundays."

One of the outstanding features of the scheme besides its commitment to defend the run is its ability to remain balanced and defend big plays (sound familiar?). The short safety dropping down inside the box now plays more of a role as a linebacker, being able to defend the outside edge and force the RB to cutback at the same time he can drop back into coverage. Likewise, the Cover 3 also sends more players down to defend the pass than with its cousin Cover 2, and with three defensive backs rotating around the deep third of the field teams are hard pressed to make big passing plays down the field.

Let's look at how each section of the defense work in a technical level, starting with run containment and defense:

Observe how playing eight men in the box allows each defensive player to take care of each offensive run gap/lane. This is why Cover-3 works so well in this regard - practically every person has one gap assignment, and it really doesn't get as simple as that. You can also see that, with some two-gapping specifications, the 3-Tech and the 5-Tech can force a double team and leave the back four players free to contain the play and make the tackle. In the diagram above, any runs towards the TE side will let the SS force the run back in if he plays with outside leverage, and the WILL does the same thing accordingly.

However, this also make it just as important that each player stay disciplined and remain on their gap. If one person gets trapped or over-pursues, for example, he probably only has the lone free safety to beat for the touchdown. This is why a superb front line is necessary to run the Cover 3 effectively, and why PC/JS have worked so hard to improve that unit overall.

Now see everything happen on the tape: 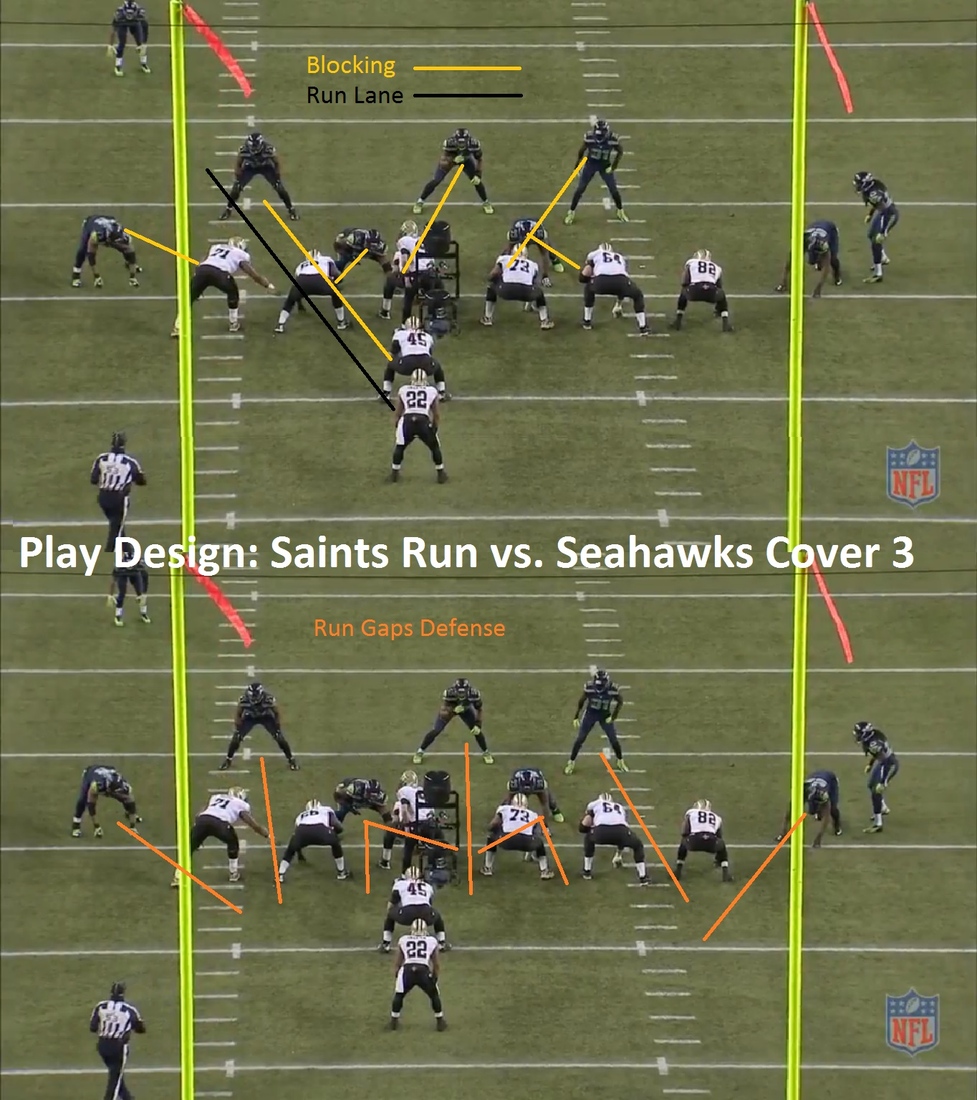 First off, it looks as though the Saints match-up with the Seahawks defense as well. If every offensive player does his job, then practically every defender is covered, and with Richard Sherman playing pretty deep inside, Mark Ingram would've only needed to beat Earl Thomas for the touchdown. Provided that the center even manages to get in front of Bobby Wagner and the right guard/right tackle manages to "pizza" towards K.J. Wright, this is a very solid play.

Here's where the Seahawks look to break everything up. Because Brandon Mebane is "two-gapping", his first move is already there to disrupt the center from getting a clean path towards blocking Wagner. With his speed, Wagner then can easily come in and make the play freely. (The same can be said with Tony McDaniel, but because the play design is created so that the RG and RT block him at the first instance, I'll count him out).

Secondly, instead of having a traditional 5-Tech play the 4-3, you have Red Bryant, which, if you ask an offensive lineman to take him one-on-one, is a task in itself. As you can see below, Bryant doesn't do much except throwing a good block and holding his ground, but purely because of that he stops Ingram from cutting towards the outside and makes the play himself. 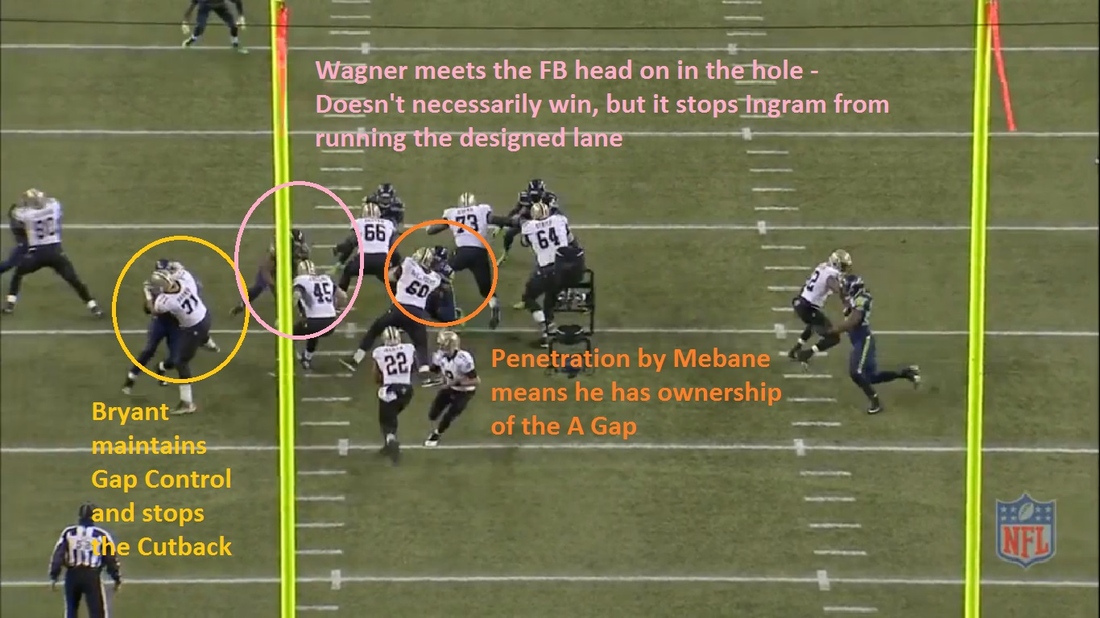 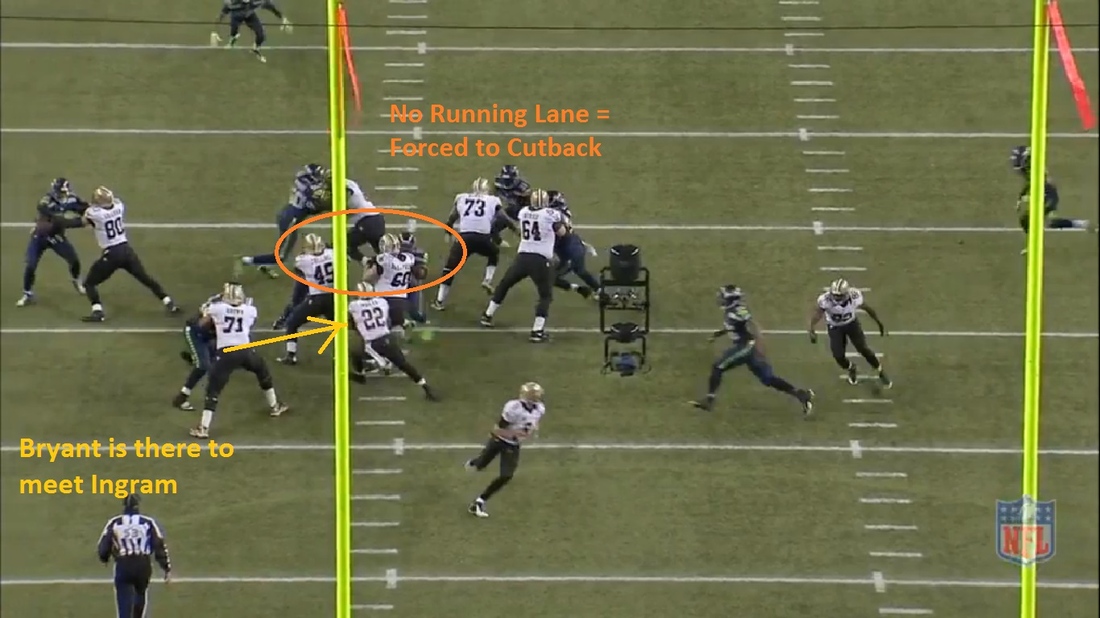 Here's the play in review in real-time:

Now let's look over on how Cover 3 is schemed to defense against the pass: 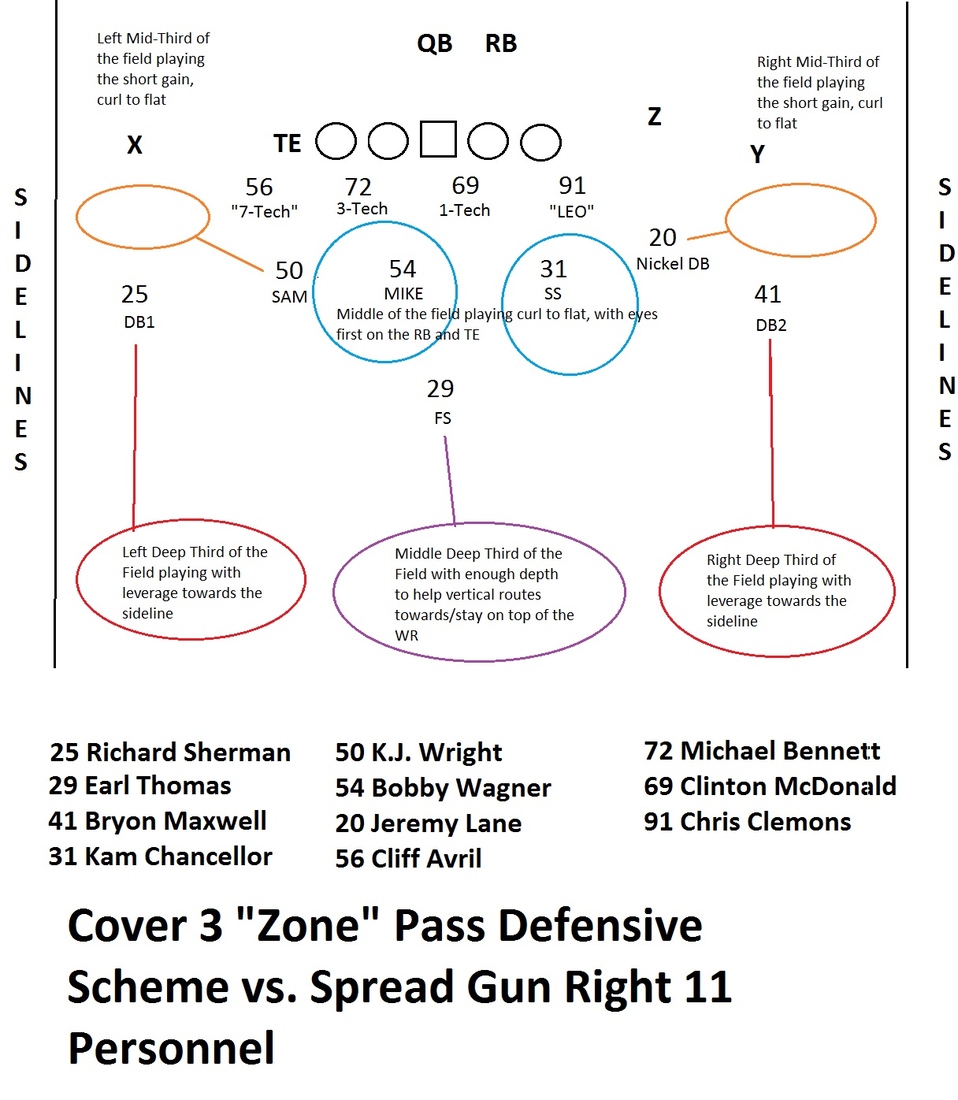 On the technical level, it's a very basic play coverage: the two defensive backs and the free safety each cover a third of the deep field. The short safety, dropped down to near the linebacker level, has to take care of the middle of the field with checkdowns to the running back. The middle linebacker has the exact same thing on the other side. Remember, both the linebackers and the short safety's primary objective in the Cover 3 is defend the run, so they aren't as emphasized in pass coverage, although the short safety, as mentioned earlier, needs to be a hybrid player.

Rounding out the rest of the scheme, the outside linebacker and the nickel defensive back have the short middle zones, ranging from the outside, and like the DB's and FS, they play with leverage towards the sideline as well. Their focus is on the short routes - the curls, the flats, the screens, etc.

Of course, as Scott Enyeart said, "there is no perfect defense", and one of the most glaring weakness of the Cover 3 is that it's easy to get beat over the middle. Remember, Seattle sacrificed one safety in coverage by running him down inside the box, so it leaves our free safety as the lone man to defend the entire zone. This is why play-action with multiple deep routes down the field is a perfect attack to Cover 3.

If the free safety bites hard on the run, then a wide receiver can get a good job with the defensive back. Similarly, if two receivers run verticals, the free safety can be baited to help one offensive player, leaving the other with a one-on-one coverage that the quarterback will take every time.

Watch what I mean here:

Now I'd argue that New Orleans, with that good of a coach and quarterback, no doubt implemented some form of that offensive play into their gameplan last Monday. Thankfully, the Seahawks has also significantly improved since that Washington game. The wonders of what an new defensive line could do... 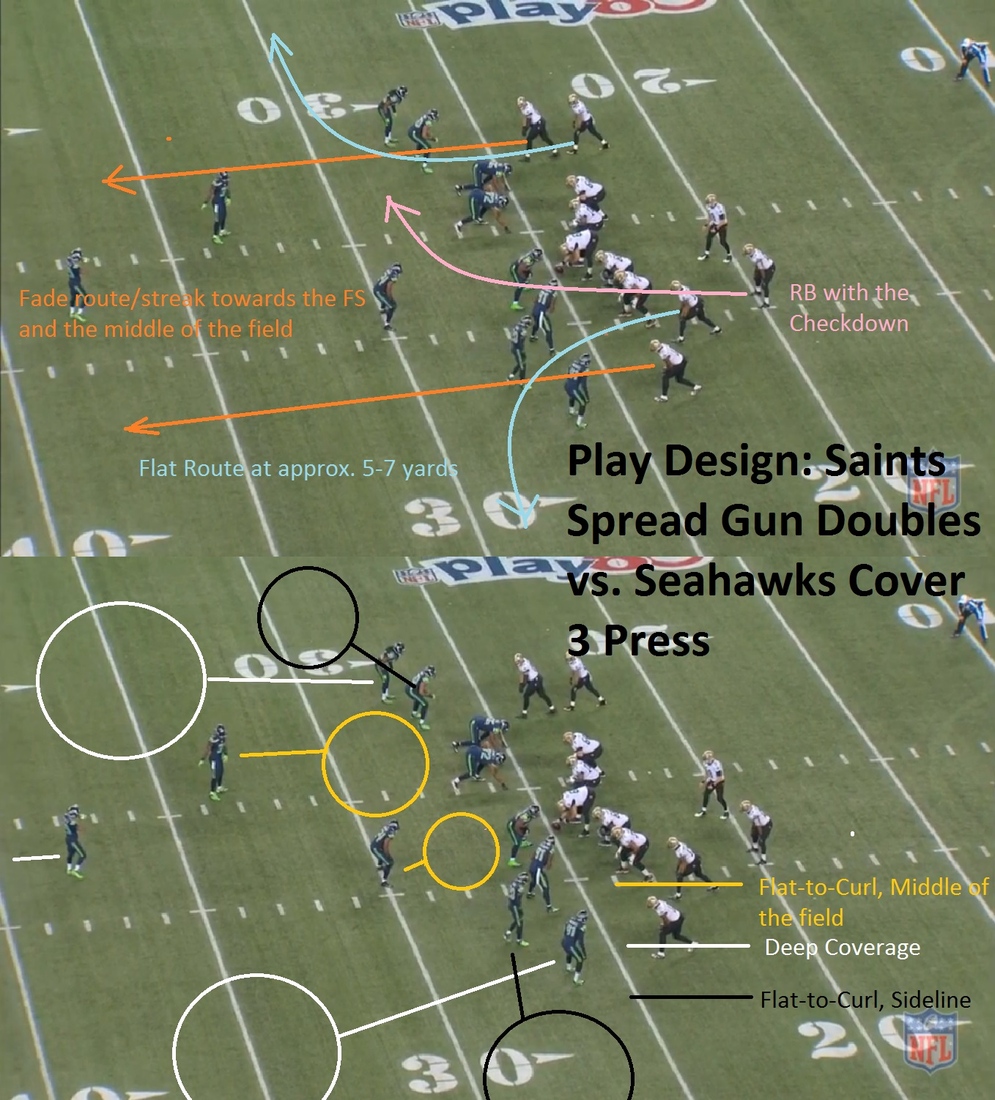 Notice how I altered the terminology of Cover 3 "Zone" to Cover 3 "Press". That's because the Seahawks variant requires a lot of physicality up front, even if the defensive backs are playing zone. So for example, Richard Sherman, K.J. Wright, Jeremy Lane and Byron Maxwell are all lined up as if they are playing man coverage. At the snap, each of them will at least press the guy (maybe do a little of hand-fighting) they are in front of before moving to their respective zones. This is so that the rhythm of many quick gain routes - slants inside, hitches, can be disrupted. A well-run West Coast Offense is kryptonite to any zone defenses, so by being physical at the line of scrimmage the defensive backfield can alleviate some of the pressure and weakness.

Now, Drew Bress and the offense run a good counter to Cover 3. As mentioned earlier, if two receivers run deep down the middle of the field, it theoretically should isolate at least one favorable match-up because the free safety is forced to decide who to help. Additionally, the inclusion of Jimmy Graham as a wideout is already a mismatch on its own. Plus, with only five yards to go for the first down, Graham shouldn't even be the primary target - the out routes by the other two receivers would be the most optimal options, as well as the checkdown to the RB if he frees up the middle of the field.

But once again, Seahawks are there to break everything up. First, see how seamless the transition between moving from "press" to "zone" is. Maxwell is already backpedaling to get on top of the vertical route, and Lane "checks" his man before moving out on to the flat. On the other side, Sherman moves deep to get a head start on Graham, and Wright quickly bounces to his zone on the sideline. Thomas is already moving backwards at the snap in preperation for the deep ball, and Chancellor/Wagner are staying put in the middle. 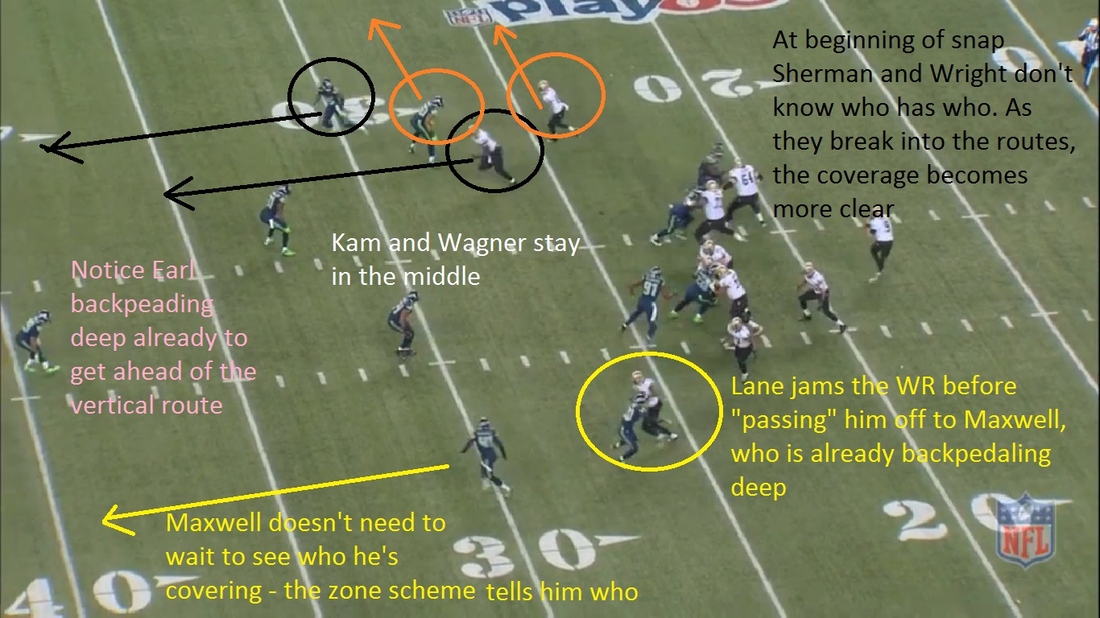 In the middle of the route, Chancellor manages to check on Graham running down the middle to slow him down, and allows Sherman to get a better angle on the route. Watch Brees looking at his TE as his primary target, but realize that Sherman and Chancellor are doing a good job of bottling him up (let alone give him the space to make the throw). 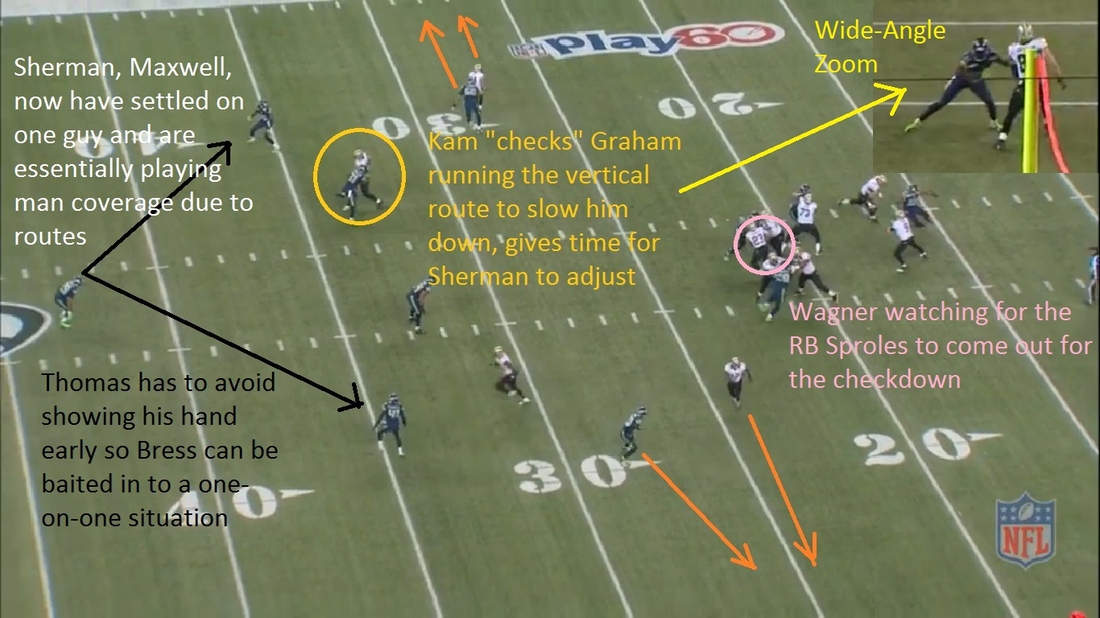 The Saints are a smart team, and suddenly, the receiver that Wright is covering turns the corner and runs a streak down the sideline, forcing Wright to go into man-to-man and leave Sherman to cover his top. Sherman, now realizing that Graham is not running a streak but a deep in-route, now has to change directions and get the top coverage of the man that Wright just bailed coverage on. At the same time, Thomas makes his decision and gives Chancellor the help in covering Graham over the top. This, is what the team calls "trust". 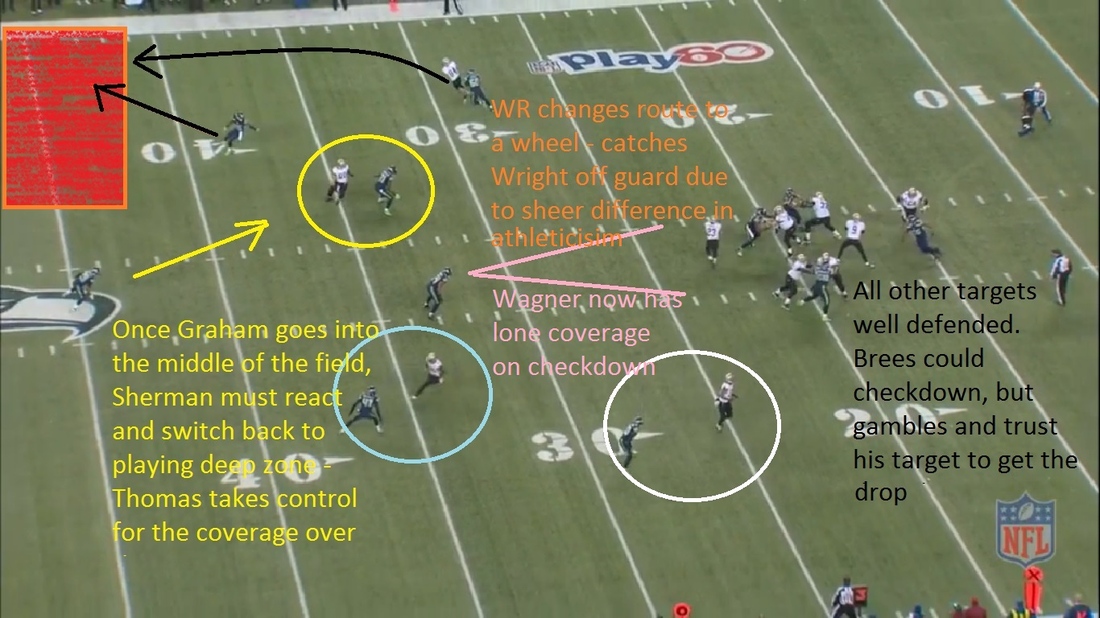 Brees, from the pocket, realizes this and immediately tries to loft the pass over to his running back for the easy yards. Even if Cliff Avril wasn't there to come with the behind strip sack, note how Chancellor and Wagner immediately abandon their coverage and charge at Darren Sproles. 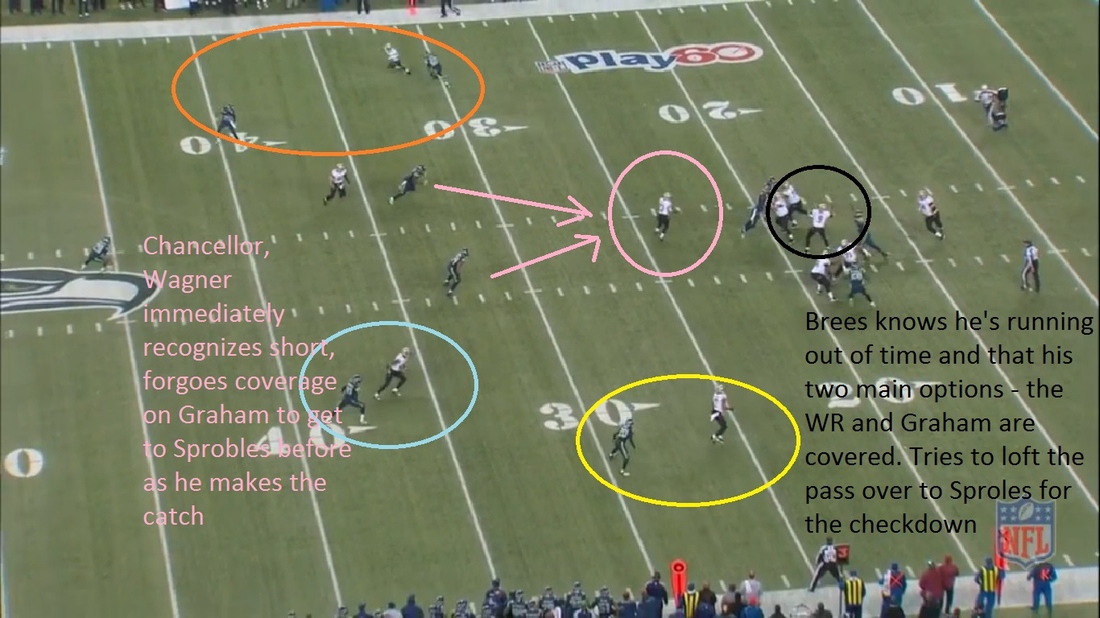 Again, the play reviewed in real-time:

Does the scheme makes the player or does the player make the scheme? This is a question that has haunted the game of football, and like the chicken vs. the egg argument, there's compelling evidence for both. We saw how Darrelle Revis and Nnamdi Asomugha struggled when they switched from man to zone coverage respectively, and neither the Jets nor the Raiders have ever been the same since both players left.

Of course, what this article shows - and what Earl Thomas, Pete Carroll and the rest of the Seahawks believes - is that you need a bit of both to succeed. Thomas is arguably the centerpiece of the defense, and his pure speed and athleticism allows him to travel large stretches of the field at the speed of light. When you combine this with a Cover 3 - which gives him the opportunity to use those skills to advantage, well - you don't really need to do much to shut down one of the best offenses in the NFL today.