Running against the 49ers: What we saw in Week 2

The Seahawks racked up 172 rushing yards against the 49ers in September while being unable to pass effectively. Can we expect the same when next they meet?

Share All sharing options for: Running against the 49ers: What we saw in Week 2

On the flip side, Seattle managed to run the ball for 172 yards. The average per-carry was not spectacular (3.7), but it was still far more productive than the passing game. On the season, the San Francisco defense allows 106 rushing yards and 206 passing yards.

In the immortal words of Pete Carroll, "What's your deal"?

At the time, Seattle quarterback Russell Wilson was coming off a 320 yard performance on the road against the Carolina Panthers. Seattle had recently cut Pro Bowl fullback Michael Robinson due to severe illness, and was working a rookie replacement at his position and a rookie at the #2 tight end spot. Marshawn Lynch had measley 43 yards against the Panthers.

San Francisco, meanwhile, was as talented as ever up front, and they were coming off a win against Green Bay in which they had limited the Packers' running backs to 50 yards on 17 carries-- an impressive feat considering the attention that Aaron Rodgers demands.

But you must have known I was not a great fool, you would have counted on it, so I can clearly not choose the wine in front of me.

In the first quarter, Seattle attempted 8 passes for a net of -5 yards and 6 handoffs for a total of 41 yards. The counterstrategies began almost immediately, eventually resulting in a more balanced level of success, but nearly twice as many runs: In the 2nd - 4th quarters, Russell Wilson dropped back 17 times for a total of 123 yards, and handed the ball off 35 times for 135 yards.

Let's look at some of the coverage strategies that got us there:

Early and often, San Francisco lined up with 2 deep safeties. But in actuality, this was a three-deep coverage scheme. Carlos Rogers, #22 at the bottom of the screen, is playing seven yards off the line of scrimmage: 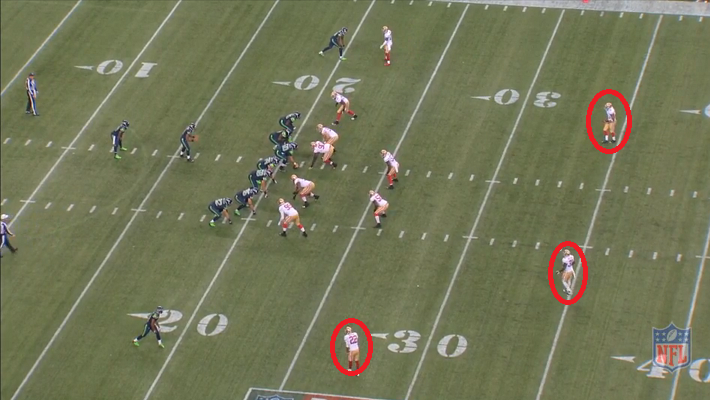 This is a pretty good plan considering the opposition and available talent. Having three men deep allows the opposite corner and the linebackers to aggressively jump routes. Wilson threw incomplete passes on several slants and even on a wide receiver screen. Throwing deep is very difficult.

The run support is weaker in terms of available numbers, so they can expect Lynch to pop a fair number of runs between 3 and 8 yards. But this is also where San Francisco has its best playmakers, and if the linemen and linebackers can beat their opposing blockers at least some of the time, stopping the back for a minimal gain or even a loss, then Seattle won't be able to sustain a drive running the football.

Sometimes, the 49ers would not reveal the third deep man until after the snap. Here, the corner at the bottom of the screen lines up in what could be press coverage, but immediately bails at the snap: 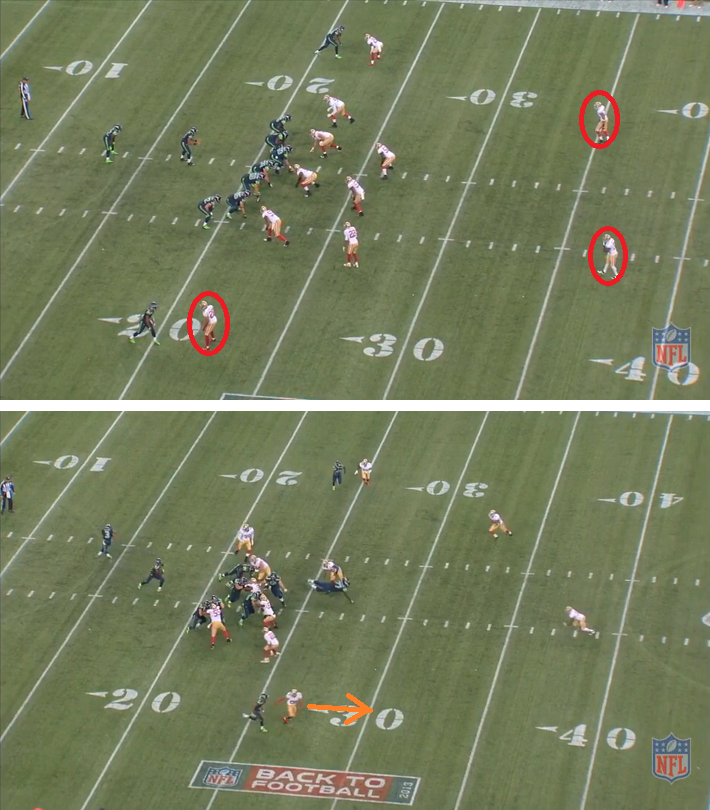 Notice that the two safeties react to the run, but the corner (orange arrow) has his back turned. With both safeties so far back, that leaves seven in the box + the opposite corner with any chance of stopping a run in the first ten yards. Robert Turbin exploits this for a decent gain.

Seattle makes the defense's job easier by aligning both receivers tight to the line. Now the defense only has to defend a field ~30 yards wide. Both corners can play off coverage and still be available for run support. The play results in a sack: 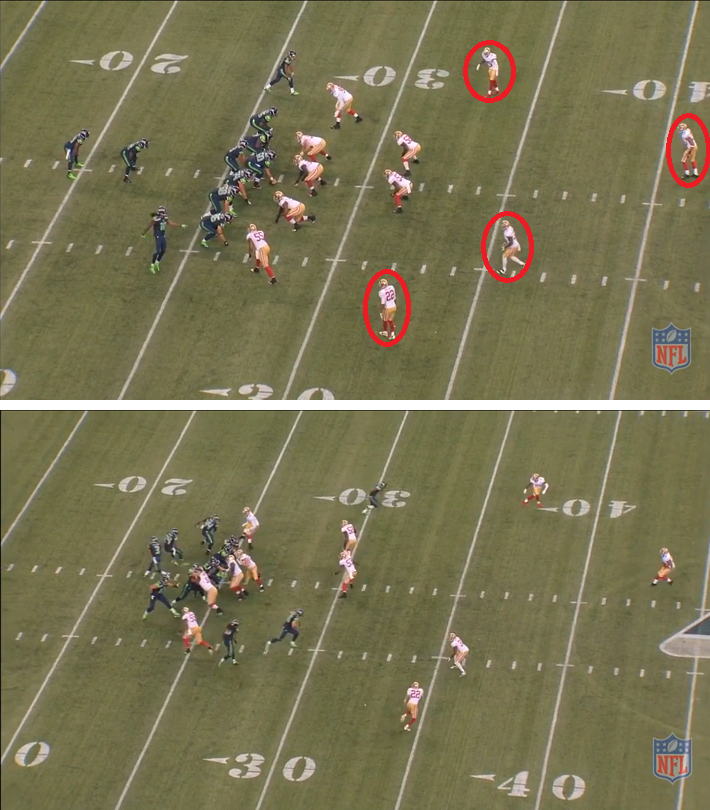 The real iocain powder for the Seahawk running game was the lack of split wideouts. When Sidney Rice motioned to the same side of the field as Golden Tate, San Francisco only had to worry about deep balls on one side of the field. One safety drops to 15 yards, the other moves forward, and both corners play facing the line of scrimmage: 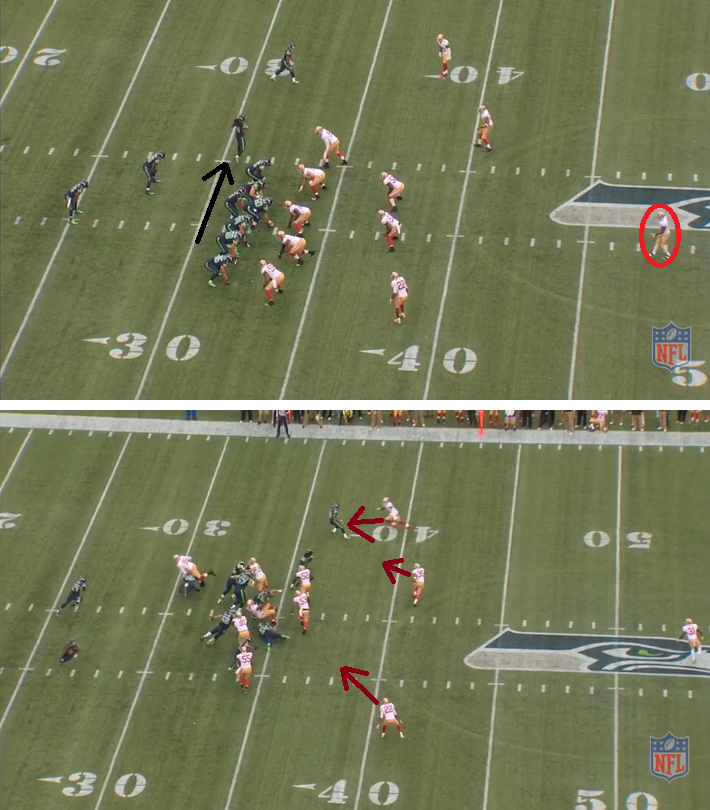 So instead of running the ball against a six-man box with one support corner and three men deep, Seattle is running against seven up front with three more in close support (red arrows) and just one man deep. Lynch is stopped for a minimal gain.

Seattle lines up with two TE's and only threatens one side of the field with a wide receiver. Again, San Francisco's defense responds with a much more effective run-stopping strategy. There are seven men at the point of attack, three more facing the line of scrimmage, and just one man deep: 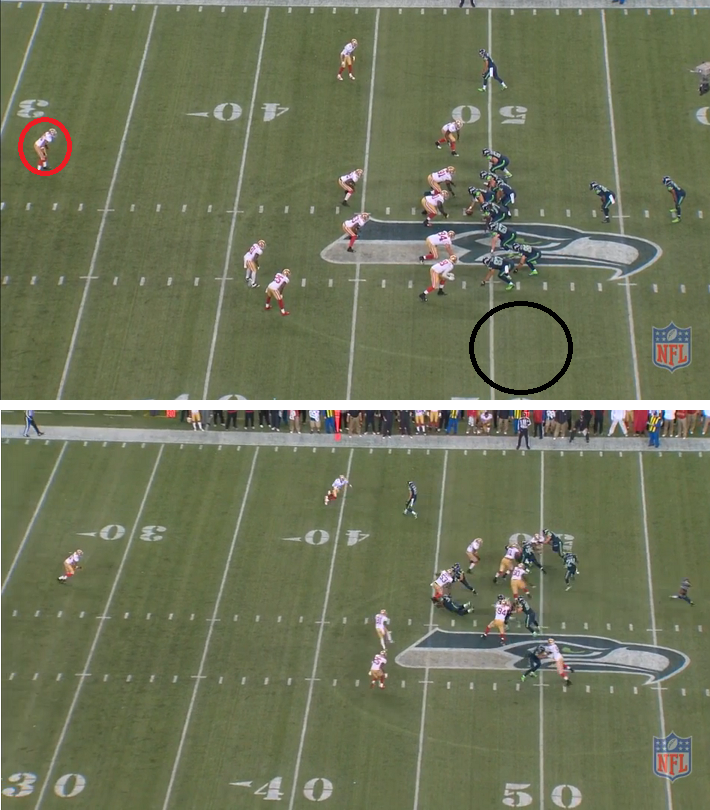 Putting a wide receiver in motion is a good way to expose the coverage (man, zone, or whatever). Lining up in unbalanced and unusual formations is a good way to screw with the opposing defense. Generally speaking. So I don't want to criticize Seahawks' offensive coordinator Darrell Bevell too harshly here. But when facing the 49ers, and the cautious pass defense they played in week 2, the lack of split wide receivers really hurt the running game.

This is another play with three-deep disguised. Two safeties start off 15+ yards off the line of scrimmage, with cornerback Nnamdi Asomugha assigned to bail at the snap: 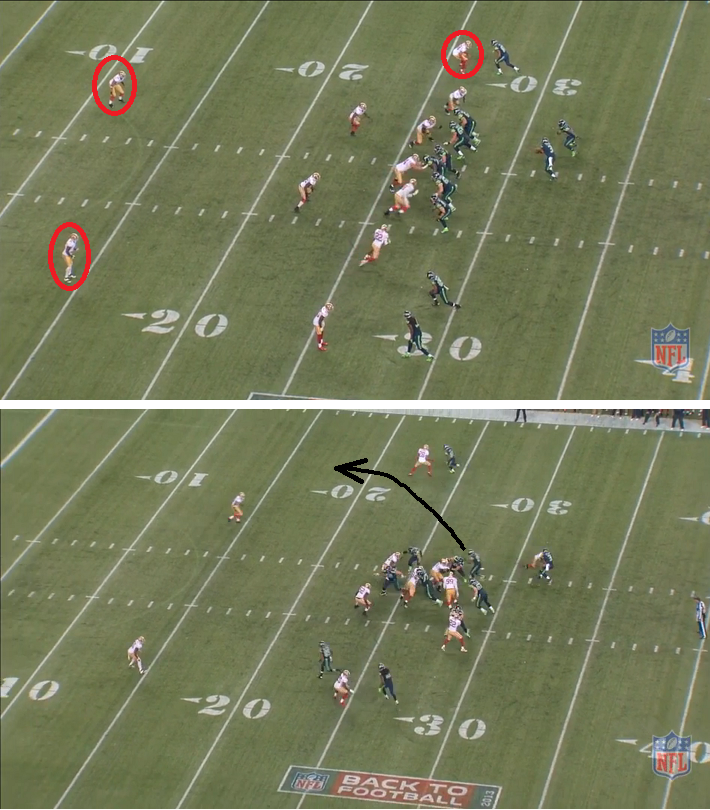 At first glance, it seems like a bit of good fortune for the Seahawks in that the slot corner is blitzing from the side opposite the run. But keep in mind that this is a defensive play designed to stop the pass. The slot corner is blitzing from the side opposite Lynch so that Lynch will have a harder time picking him up if he stays in for pass protection. If Rogers had been playing press coverage or off coverage on the receiver, the result of the play would've been the same. Seattle has a numbers advantage at the point of attack, and Lynch follows the bailing corner for a big gain.

Again, Seattle lines up with 2 TE's and only one man wide. San Francisco moves in from their 3-deep coverage and is able to defend the run with 10 men facing the line of scrimmage within 5 yards. 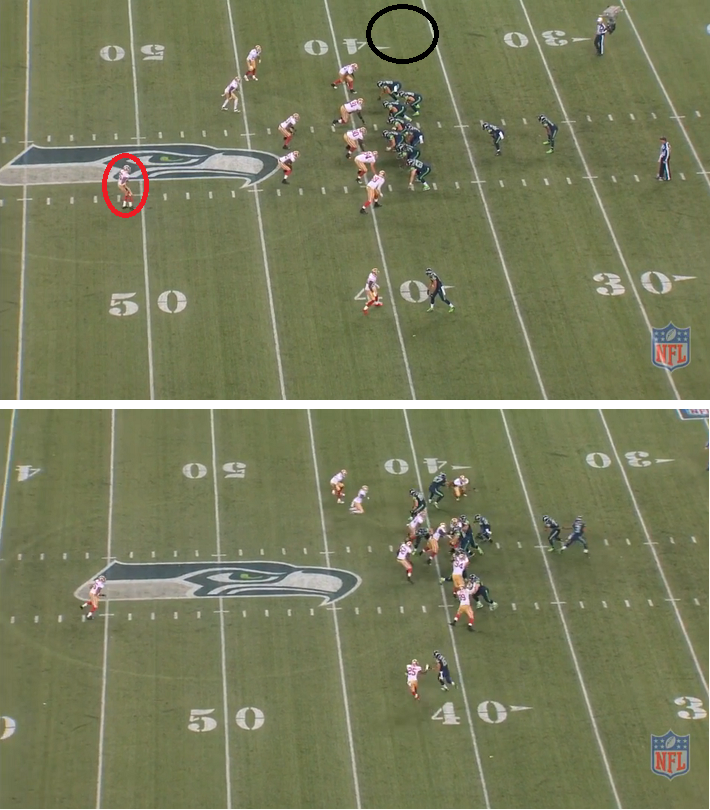 Lynch is stopped for a minimal gain.

What will change this Sunday: Both teams have had an opportunity to study the film, so I don't expect the split vs twin wide receivers paradigm to be as defining in the success of the run game. Seattle might run the ball more out of split WR sets, but they could also counter San Francisco's strategies by throwing more play-action from unbalanced formation. Tight end Zach Miller is a dangerous receiver, and had just two catches in the first contest.

What won't change: The 49ers respect Lynch, but they fear Russell Wilson and his receivers. Expect them to give their talented linebackers a chance to contain Lynch without stacking 8-9 men in the box. The pass coverage might be disguised differently, but they won't make the same mistake as the Saints and allow Wilson to throw uncontested passes deep. Seattle will have to work its way down the field more methodically.