First off, quick apology for not doing more Xs and Os work lately. I've been preoccupied with the Draft and there's been a lot of news this week and well, I've been reticent to go back and watch the Seahawks too much because it is kind of depressing digging in to games knowing how the season ended up. Especially that Atlanta game. Sigh.

Anyway, my goal as of today is to try and do more short, one-off Xs and Os posts that quickly examine some of the Seahawks' schemes and playbook. Taken as a group of posts, maybe it will shed light on greater philosophies and ideologies and tendencies and all that, but individual posts will be a little more micro-focused.

I finally went back and watched the Seahawks-Falcons game last night and there were a few plays that really stood out to me. One in particular was made by rookie running back Robert Turbin, who displayed a certain veteran poise that I was really impressed with. An aspect of the running back position that often gets overlooked is pass protection, and it's often one of the toughest things for a young back to pick up. There are exotic defenses in the NFL, players come from every angle, you have to know protections and slides and responsibilities and really process all of it quickly.

One play by Turbin, in the fourth quarter, was impressive in that even though he wasn't charged with pass pro on this particular snap, he improvised on the fly to help Russell Wilson avoid a sack. Combined with some of his strong play late in the year, this play gets me very intrigued for the upcoming season, where the former rookie out of Utah State stands to see more touches.

Let's break it down:

The Seahawks are driving - down 27-14 at this point and just barely hanging on for dear life. The previous Seattle drive, Russell Wilson had waltzed into the endzone to put Seattle to within two scores, and instilled a little bit of fear into the Falcons' hearts.

Following an Earl Thomas pick and a gorgeous 24-yard deep-out connection between Russell Wilson and Sidney Rice, the momentum was undeniably in Seattle's favor. After a five-yard pickup by Marshawn Lynch on first down, Darrell Bevell called a read-option play-fake pass out of '11' personnel - 1 running back and 1 tight end, 3 wide receivers. 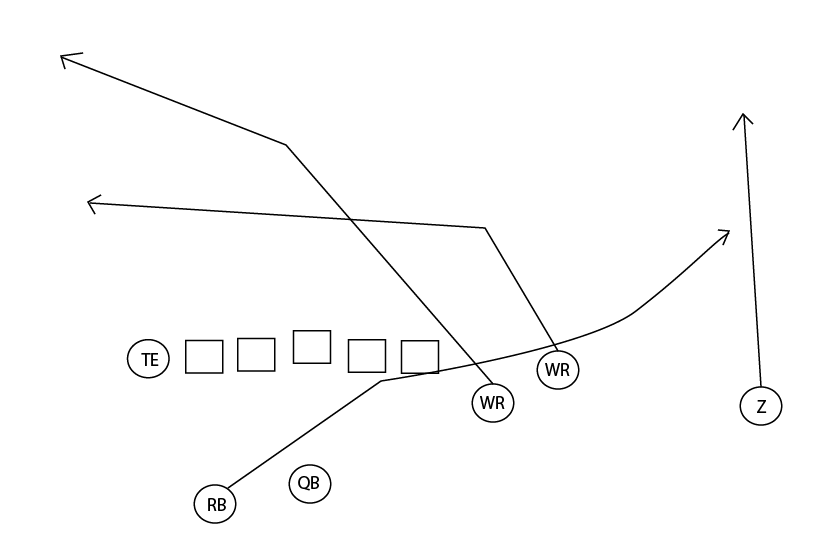 Sidney will run a go-route up the sideline, drawing the interest of the safety and corner to the right side of the field. Tate and Baldwin will run deeper crossing routes - attacking the holes in a cover-2 by splitting the difference in zone-coverage responsibilities between corner and safety - and Turbin will leak out into the flats as a checkdown. Miller will stay in for pass protection, which allows Turbin to release free from pass pro. 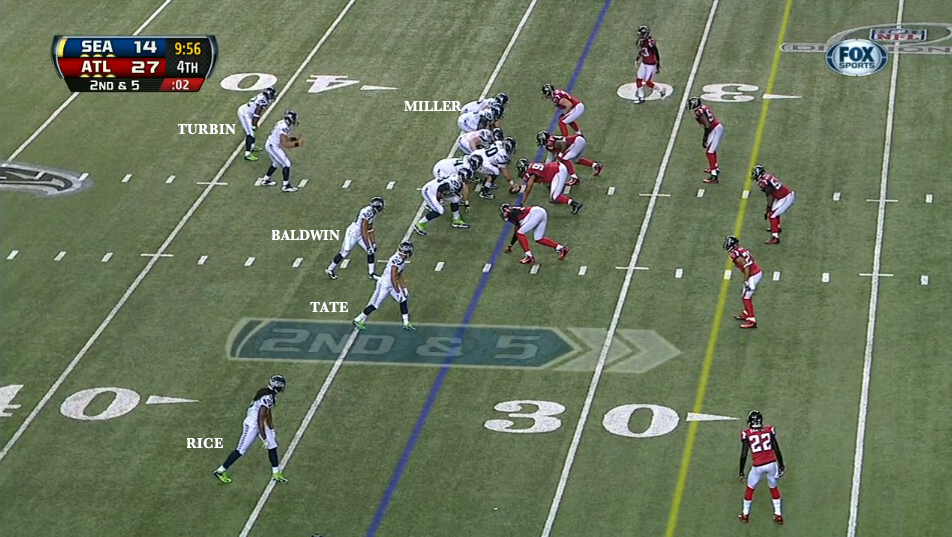 The play immediately goes awry as John Moffitt is abused with a nice club move by DT Corey Peters. Peters is past Moffitt in the blink of an eye, even before Wilson executes the play-action fake to Turbin. See below: 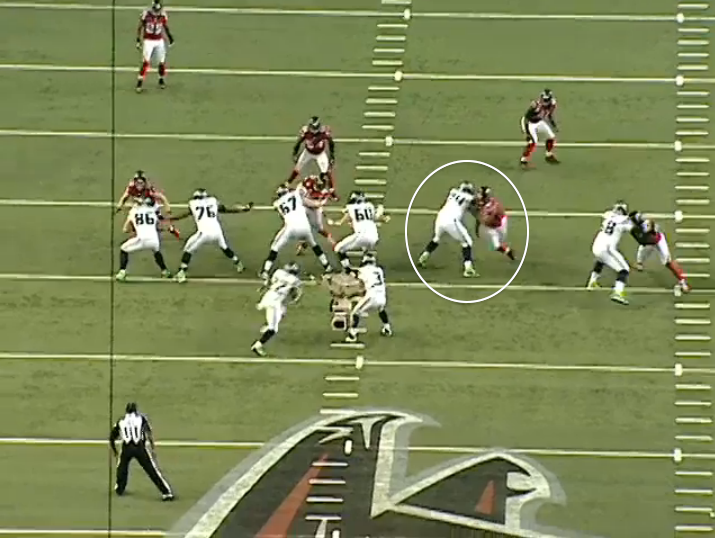 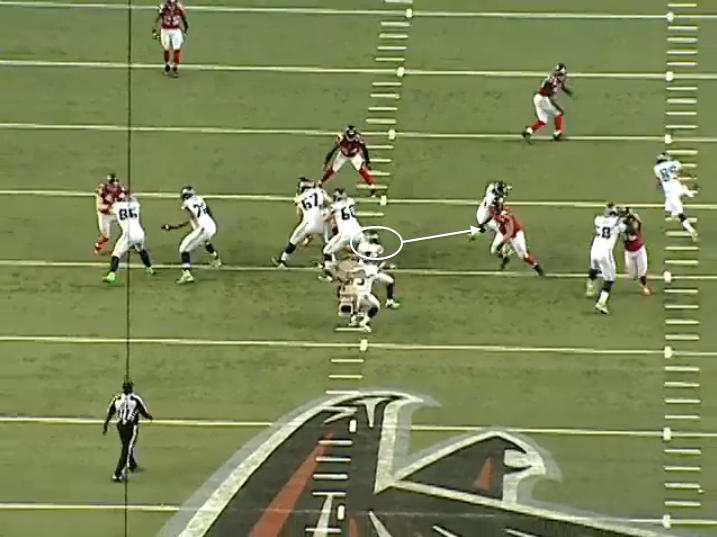 Turbin, running the play-fake, does a great job of recognizing the situation (well - I mean, Peters was right in front of him at this point) and chips down with his right shoulder and redirects Peters out of the pocket with a force you wouldn't expect. This allows Wilson to step up past Peters and extend the play, and allows Moffitt to chase down his man and seal him out on the backside.

Regardless, a heads-up and savvy play by Turbin, who then releases into his route. 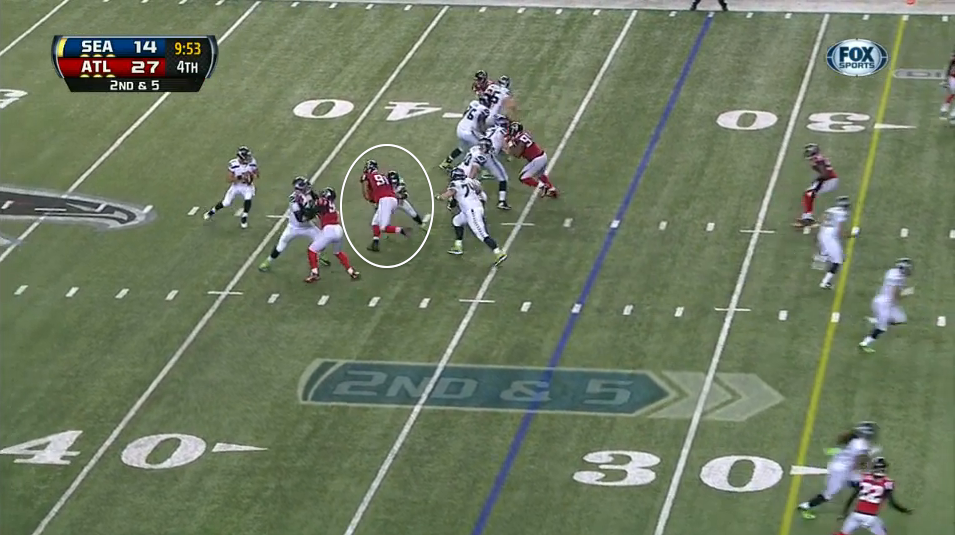 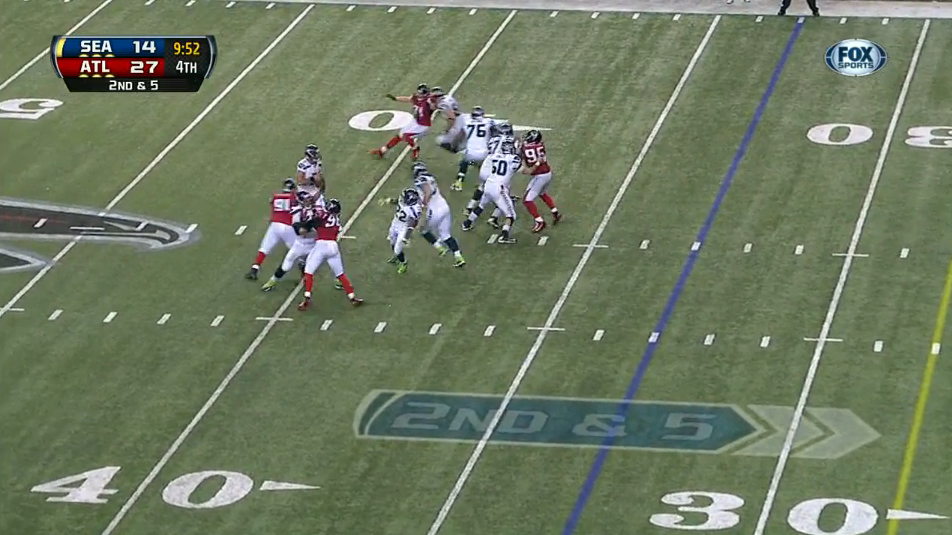 Not seeing anyone open downfield, at a half-trot, Wilson dumps it off to Turbin, who then does what he does best - plants and gets downfield. 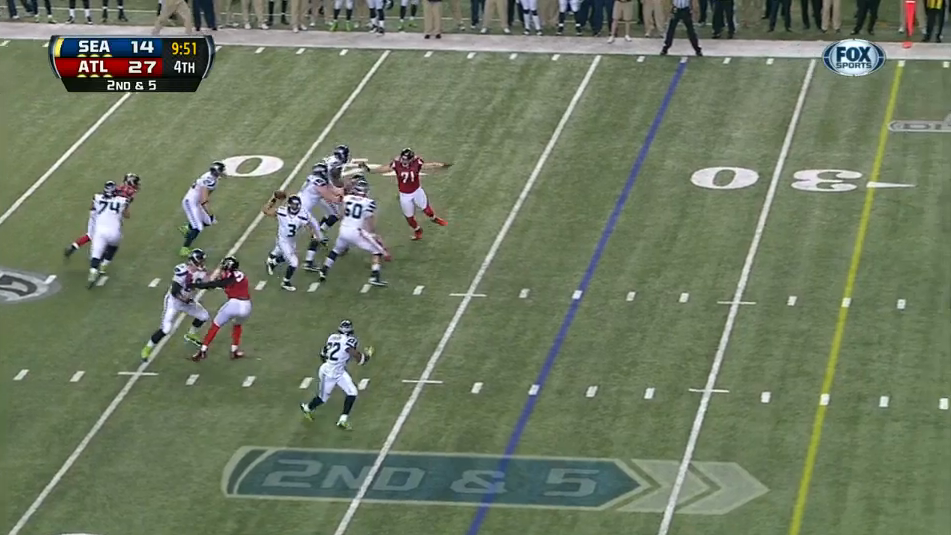 Turbin works outside before planting a foot in the ground and beating CB Robert McClain upfield. By now, linebacker #54 Stephen Nicolas has the angle on Turbin to limit the gain. 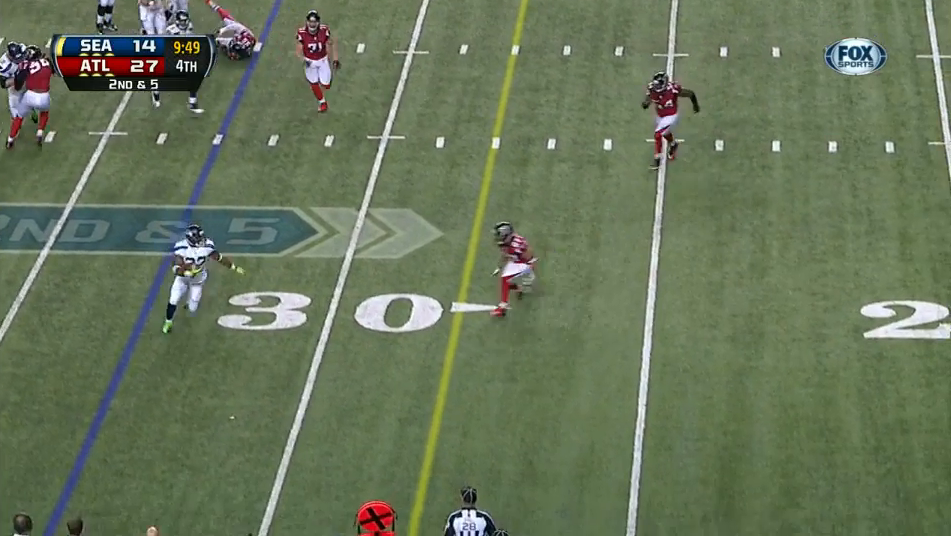 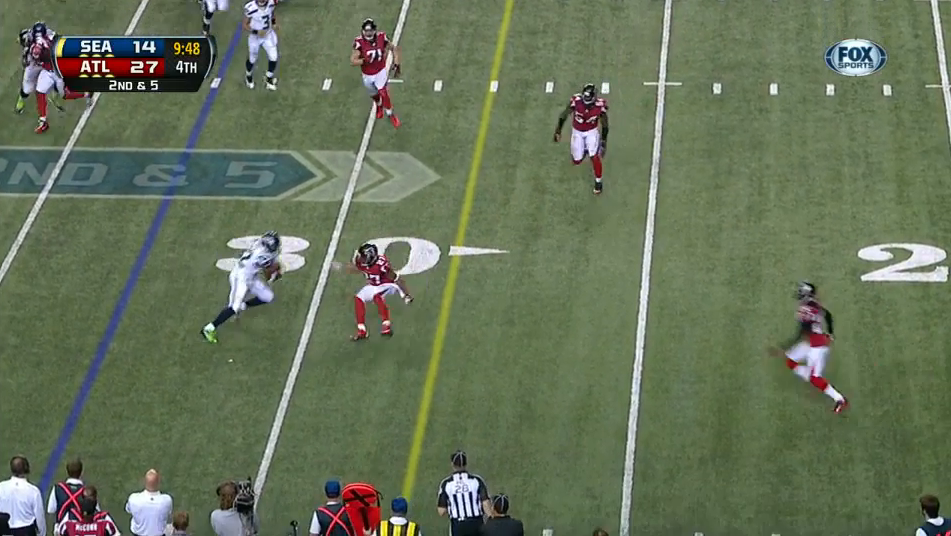 Turbin takes a lick from Nicolas but shrugs off the hit and keeps moving downfield. 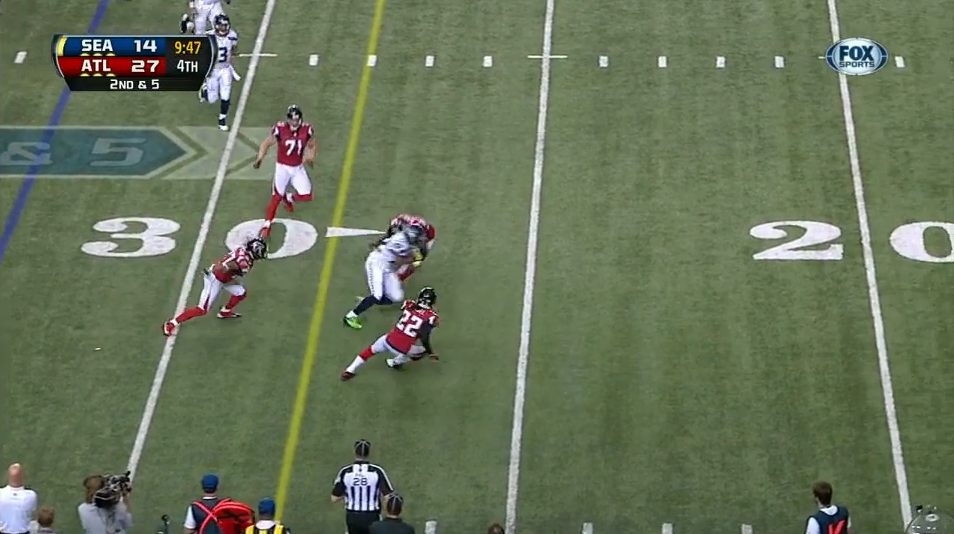 He's finally brought down at the three-yard line by Thomas DeCoud - the guy that was minding Sidney Rice in the endzone. 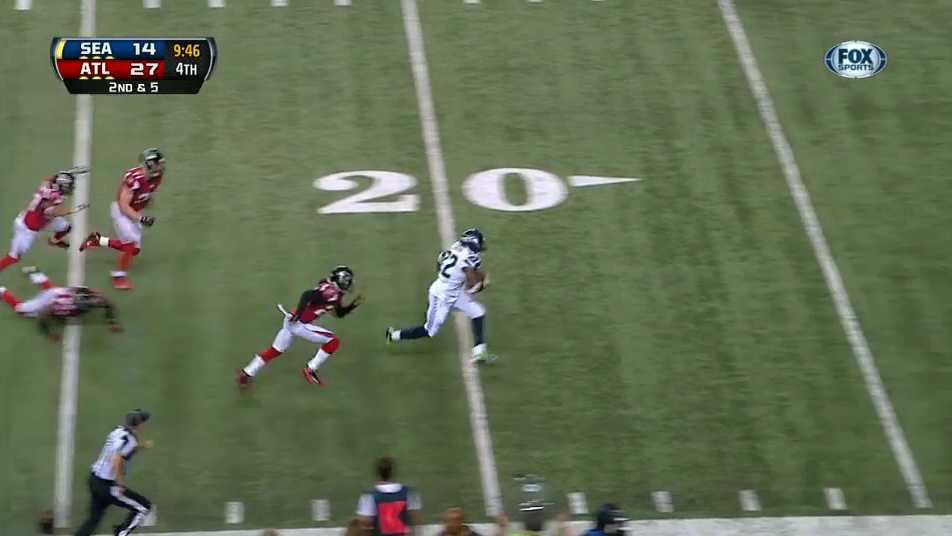 A savvy, smart play by a rookie running back to re-direct the pass rush and continue on with his route - picking up 30 yards in the process.

Zach Miller would score on the next play to put Seattle within seven. Holy crap there are some awesome shots of severely worried Atlanta fans directly following this play.