Share All sharing options for: Seahawks Replay Booth: The profound effect of play-action

I've used this Bill Walsh quote before when talking about play-action, but it's so simple and powerful that I wanted to use it again today, and I'll probably use it again in the future. Walsh said: "I truly believe [the play-pass] is the single best tool available to take advantage of a disciplined defense."

Now, in a wider context:

"The Play-Pass is the one fundamentally sound football play that does everything possible to contradict the basic principles of defense. I truly believe it is the single best tool available to take advantage of a disciplined defense.

By using the play-pass as an integral part of your offense you are trying to take advantage of a defensive team that is very anxious, very intense and very fired-up to play football.

In highly competitive football, it is very unlikely that you will be able to run the ball so effectively that you will not need to do anything else to move the football. There is no question that having the play-pass, as a part of your offensive arsenal, can allow you to get a key first down or big chunks of yardage."

Seattle's core identity on offense is centered around running the rock. Marshawn Lynch. 34 rushes a game. Most in the NFL. Most runs on 1st down. Most runs on 2nd down. It's not just a Pete Carroll talking point and it's not one of the intangibles like "Always Compete" or "Win Forever." Carroll wants to run the football, and that's what Seattle does. More than any other team in the NFL. I feel like I forget this from time to time or underestimate it. They might throw a little bit more in 2013 than they did in 2012, but it's not going to be a drastic change.

The dedication and adherence to the church of smashmouth is not a stubborn reluctance to evolve with the rest of the pass-happy NFL. It's centered, I think, around Carroll's belief in the play-action passing game and all the philosophical and emotional ties that go along with creating 'explosive plays'. Big Balls Pete takes almost a Phil Jackson zen-like approach to manifesting the power of the explosive play: big momentum, creating belief, energy, the team, 'totem', long-body - all that.

This isn't new, of course. I've written about it before. But, because it's such a staple of the Seahawks' offensive identity, it always shocks me just how absurdly effective it remains.

Case in point. The 2nd to last Seahawks' touchdown of the season. Seattle down 27-14. 9:19 on the clock. Hawks at the 3-yard line. Bevell reaches into his bag of tricks and pulls out a couple of well-worn and time-tested tools - pre-snap motion, play-action, and, Zach Miller. 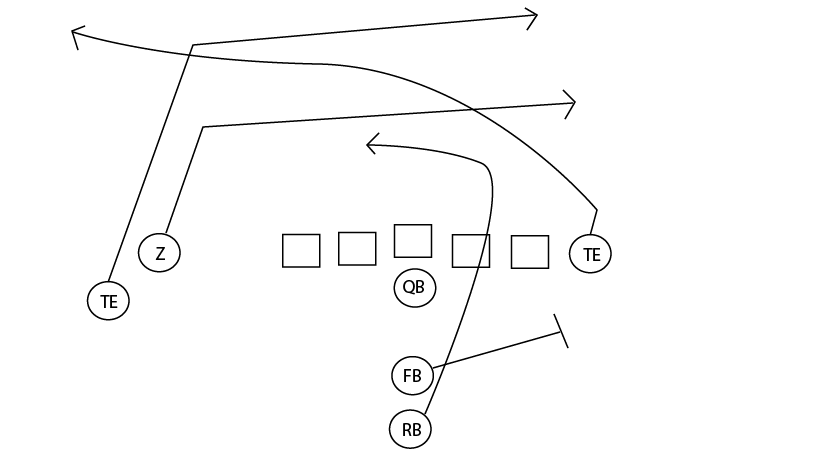 Pre-snap, Anthony McCoy motions from the right to left - safety William Moore, in man-coverage, pursues him across the formation. 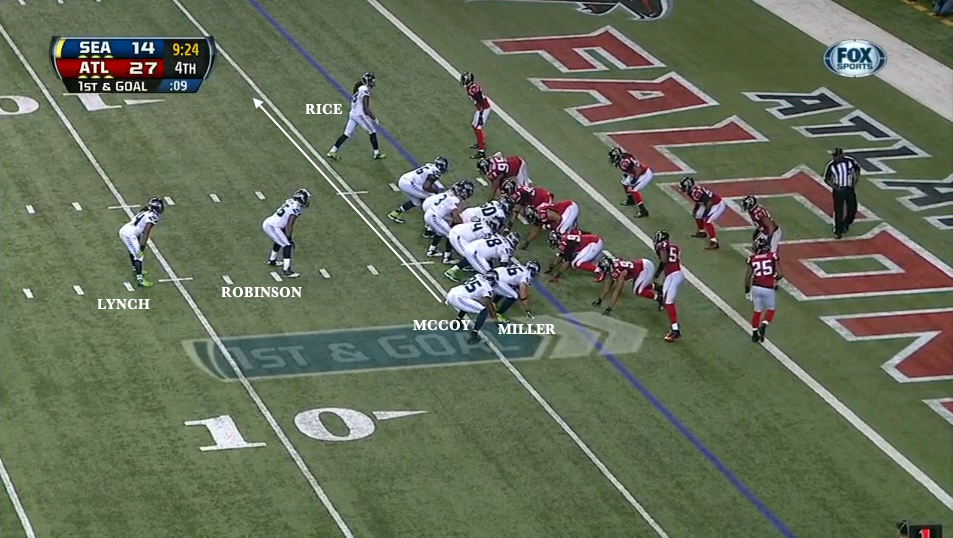 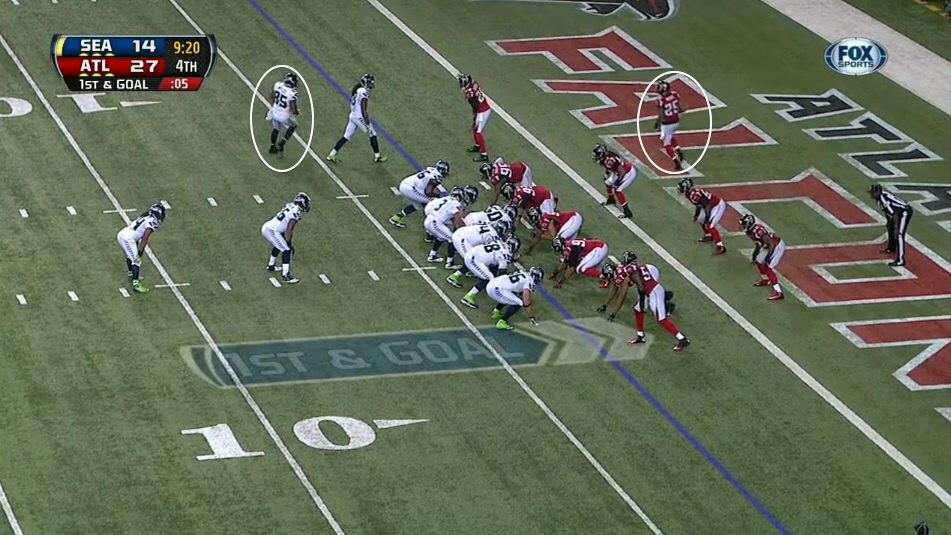 Here's where it just gets silly. With Seattle in an I-formation on first and goal from the 3-yard line, Atlanta is thinking run. And they fully commit to stopping said run.

With Sidney Rice and Anthony McCoy running shallow crossing routes behind them, you can see at least five Falcons' defenders keying in on the mobile Russell Wilson and eagerly awaiting his handoff to the bruising Marshawn Lynch. Like those superflous adjectives? Actually they're not superflous, because they are precisely the modifiers that make this play-action fake work. The defensive ends to the open side of the field have to respect Wilson's ability to scramble, and the linebackers/defensive backs stepping toward the line of scrimmage have to respect Lynch's ability to put the team on his back doe and carry several people across the goalline. 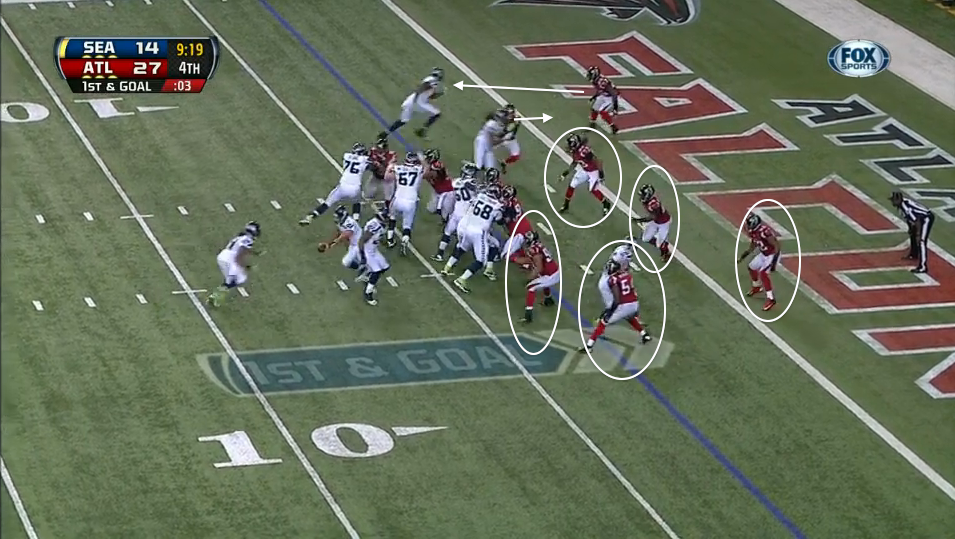 As it turns out, Wilson does not hand the ball off to Marshawn Lynch. Lynch dives through the line, Zach Miller releases into a pass route after an ever-so-slight hesitation, and FB Michael Robinson takes his place on the edge in pass protection. Robinson ends up mano-a-mano against 6'4, 268 pound DE Cliff Matthews. And holds his own, giving Russ the time to let Miller's route develop.

Just look at how many players have their eyes in the backfield. This is what a mobile quarterback and bruising run game afford you. 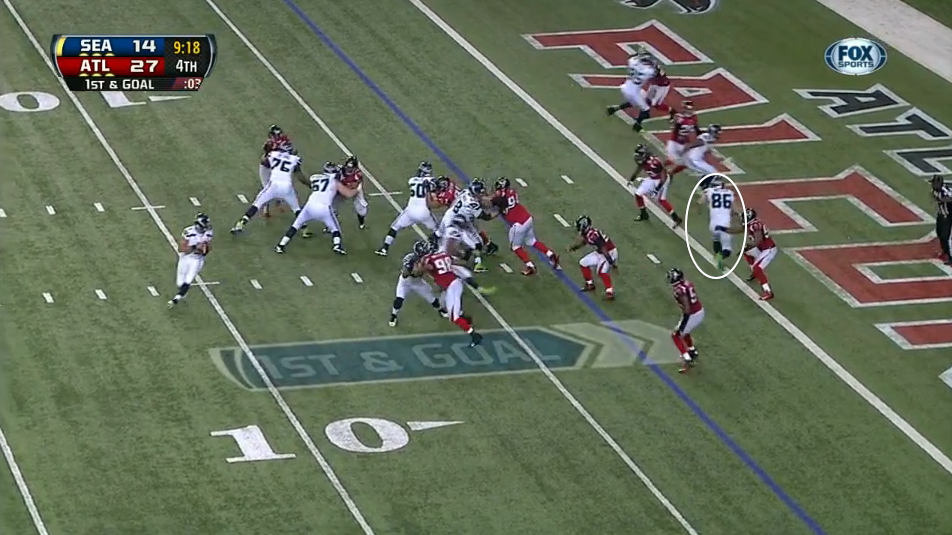 Turns out, no one covers Miller.

Walsh: "Linebackers are the players that are most affected by the play-pass because they have keys to read-whether the keys are to read the backs or linemen. Once they make a specific read, they are going to commit themselves to a run. The better job you do of faking, the more you can get a commitment from linebackers into the line of scrimmage." 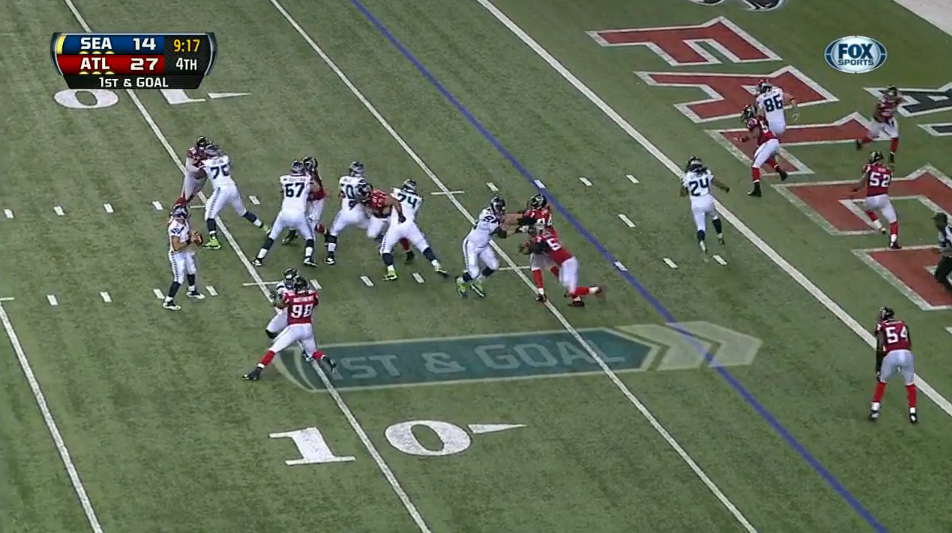 Wilson lobs a can o'corn to the back of the endzone.

The power of play action. It honestly never ceases to amaze me. As long as Seattle continues to lean on the run game, it's something that teams will never 'figure out,' that much I know. 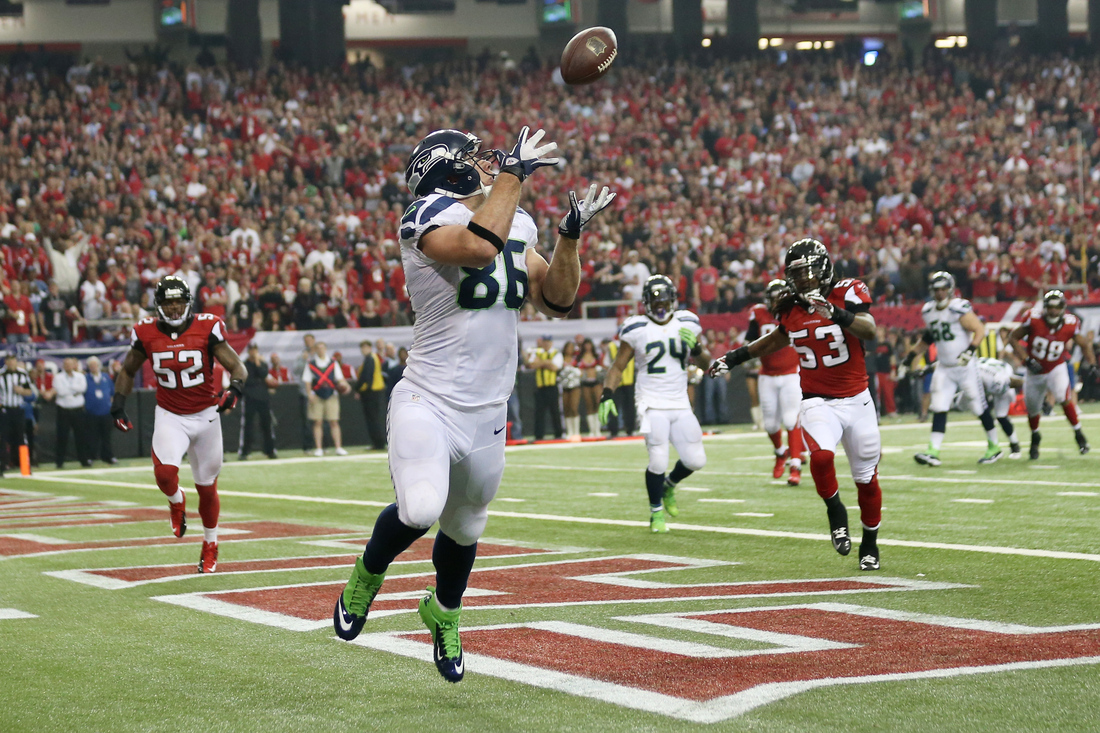