Variety in gameplanning & multiplicity within sets

Share All sharing options for: Variety in gameplanning & multiplicity within sets

Teams face a specific and unique opponent each week throughout an NFL season and generally speaking, only have about four or five days of real prep time to install the offensive and defensive 'gameplans'. What that means, and I'll use offense for this example, is that a given team's offensive coordinator and head coach (and staff) will sit down and choose a certain number of plays that they think will work well against a particular defense - whether it's a 3-4 or a 4-3, whether they're blitz happy or conservative, whether they have stars at middle linebacker, cornerback or safety (or all of the above).

Bill Belichick has become famous for his ability to completely change a gameplan from week to week and rarely tries the same things against division opponents in which the Patriots play twice a year. Belichick's varied usage of different players against different teams infuriates fantasy football players but works great in keeping opposing defenses guessing. So, you prepped for Steven Ridley all week? Bill will just hand the ball off to the shifty Shane Vereen the first ten times of your matchup. You've prepped for Gronk? He'll make Danny Woodhead the joker piece and center the gameplan around him. These are just vague examples, but you get the point. It's a constant chess match, and Belichick is one of the best at this game.

The Seahawks certainly didn't go so far as Belichick in varying their gameplan, but as the year went on, it became pretty clear that gameplans varied pretty significantly from game-to-game. It's a little harder to notice the differences with the general zone blocking offense and pro-style passing schemes because there are such a wide variety of plays, but because I studied the read-option fairly extensively toward the end of the year the little nuances were easy to see.

There were little tweaks and additions to the read-option that were added each week and if you go back and watch closely, in pretty much every game, the read-zone was run in a little bit different fashion each game. Zach Miller was used as a joker piece in all this, and his role would change from game to game. He'd be used to arc block downfield in one game, slice block against the formation in another, align in-line in another, and then Bevell would even substitute Michael Robinson in for Miller at times to act as the H-back, aligned next to Russell Wilson.

The tackles were used in varying ways - one game you'd see either Breno or Okung pulling into the formation and moving downfield and in another game they'd block to the outside. In another game, they'd simply downblock with the rest of the line and completely ignore the defensive end. These kind of tweaks keep the defensive ends and outside linebackers guessing, and these little tweaks are a reason the schemes kept working late in the year, even when teams knew Seattle was going to use them.

The same can be said about the rest of the team's offense, which comprises about 90% of the Seahawks' snaps. As Chan Gailey put it, a few years back, "There are only so many plays in football; all we're doing is finding different ways to run them all."

Tweaks in route depth, use of motion, route combinations, blocking schemes up front, and even tweaks in which player becomes the primary given a particular defense help to keep a finite number of plays working each and every year.

I don't have a profound example of this but the reason I bring it up is that in watching some of Seattle's late-season games, I noticed that there were several sets, formations, and even individual plays that seemed to really work well, and which Bevell kept going back to. I broke down one such example the other day - Seattle's use of a three tight end set/play that produced goal-line touchdowns for Russell Wilson in both the Week 17 Rams game and Divisional Round Playoffs game against Atlanta (I'm sure it was used more than that, but those are two I noticed).

Another particular play that piqued my interest produced two touchdowns against one of the NFL's best defenses.

Seattle is up 7-0 at this point in the game and now face a 2nd and 9 from the Niners 9-yard line. Seattle goes to a personnel grouping that they really liked toward the end of the year - '11' - with three receivers, one tight end and one running back. Wilson is in shotgun, flanked by Marshawn Lynch, and this initial look gives the impression that read-option might be in play. That thought is exacerbated when Zach Miller motions in from the far right wing and sets in, tight to the formation.

As a general rule of thumb, as a defense trying to guess as to what type of play is coming, these types of wide receiver splits - in tight to the formation - typically tilt the probability of run vs pass toward the run.

Watch below as Zach Miller motions in. The defense shifts slightly, but the overwhelming thought running through Russell Wilson's mind here, I would guess, is that this looks like a zone scheme from SFO.

Let's break it down: 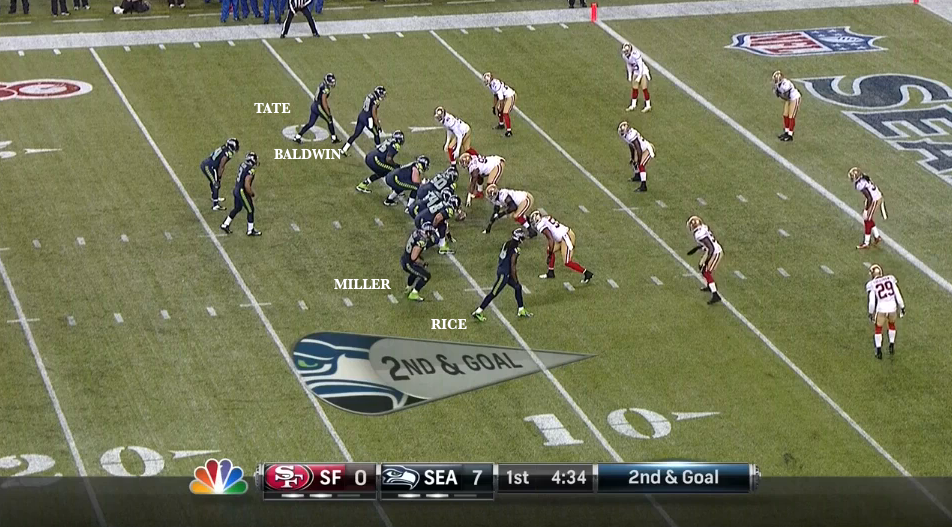 The Niners are known to run quarters from their nickel defensive package. That means you've got two deep safeties and two deep corners that play the four quarters of the deep part of the field. Underneath, you've got defenders (in this case, a nickel back and outside linebacker, respectively) that are responsible for the flats. This doesn't mean they automatically run to the flats, but if they see anyone heading in that direction, they should follow suit.

This is what you see with #52 Patrick Willis at the bottom of your screen. As Miller runs an out-route underneath Sidney Rice (who is running a corner route), Willis follows Miller into the flats. On the top of your screen, Doug Baldwin runs a post, which draws the attention of both deep quarter defenders to his side, and Golden Tate drags over the middle, drawing the attention of #53 NaVorro Bowman. 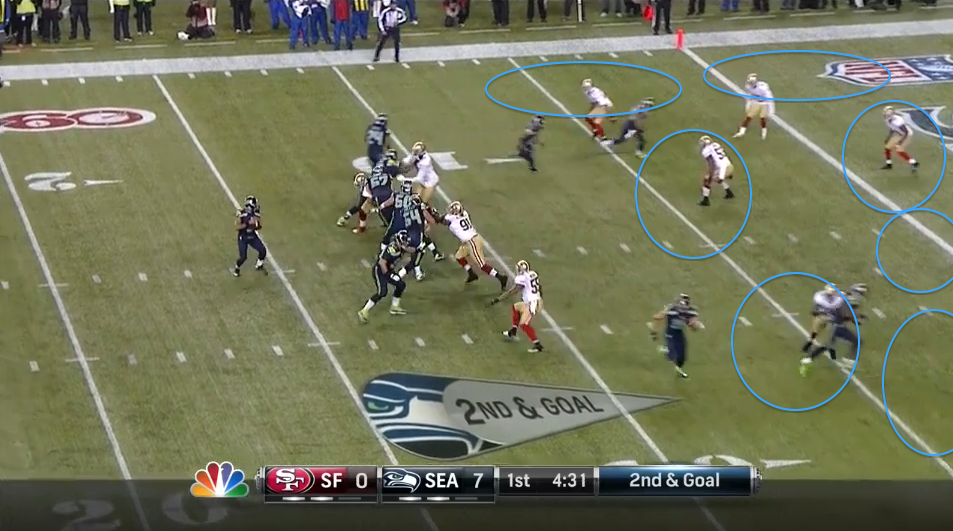 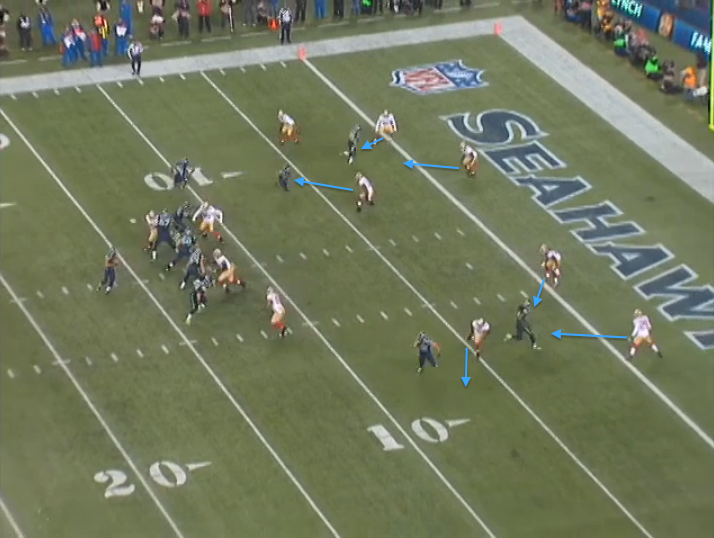 That leaves #22 Carlos Rogers matched up in zone against Marshawn Lynch, who runs a slightly delayed cut route underneath. 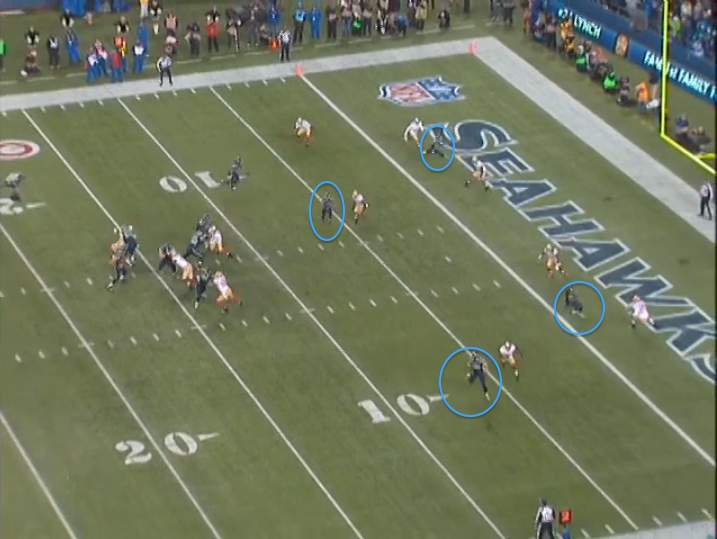 Lynch pretty much freezes Rogers - you can see Lynch sort of fake the shallow out-route dumpoff angle and then cut inside, below. Rogers must have thought that Bowman would pick Lynch up into the middle zone, but as we already saw above, Bowman was worried about Tate.

It's a brilliant play-call against quarters coverage and it puts the Seahawks up 14-0. Against this defense - it almost looks like Wilson knew he'd be going to Lynch all along.

Also note the great job by Russell Okung in opening up a throwing lane for Russ. J.R. Sweezy gets bullrushed pretty good, but manages to hold on just long enough.

Later, into the 2nd quarter...

Here's a diagram of the play. You'll see it's the same thing Seattle ran above, but Seattle has only 6 yards to go and are in a third down situation. McCoy takes the place of Miller, and will motion in tight behind Sidney Rice.

Doug, Golden, and Marshawn do their thing on the left side. 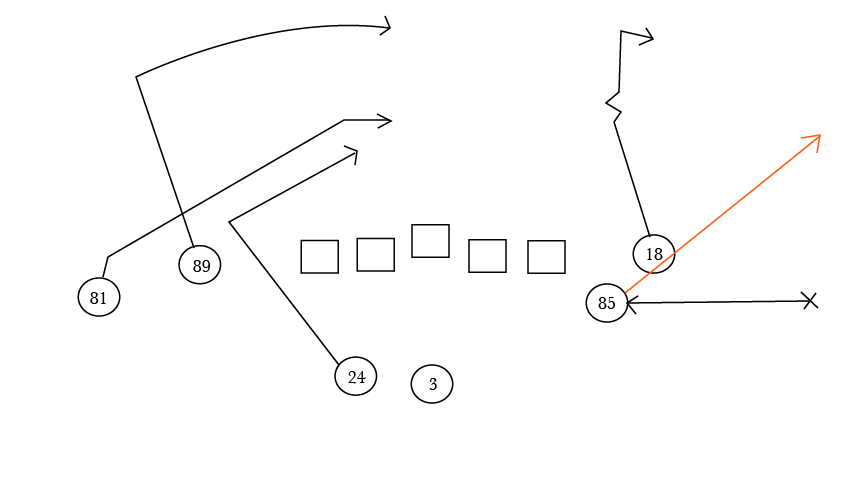 The play starts out by determining the defensive scheme - zone or man. With McCoy's motion, Wilson's able to ascertain some details that prove vital to his read. He can tell, or at least make an educated guess, that the Niners are going 'man' this time. 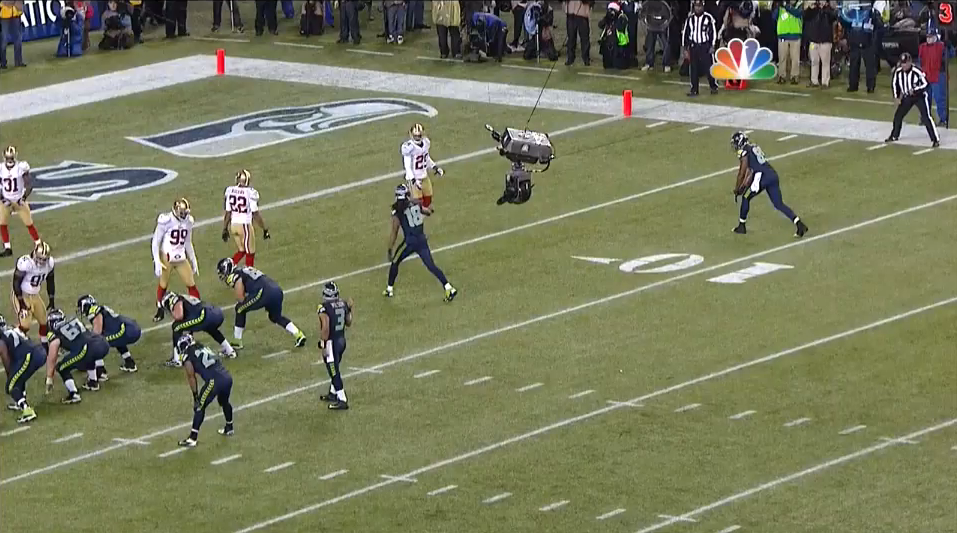 As McCoy motions in, the Niners trade assignments - you can see them pointing to each other and communicating responsibilities. 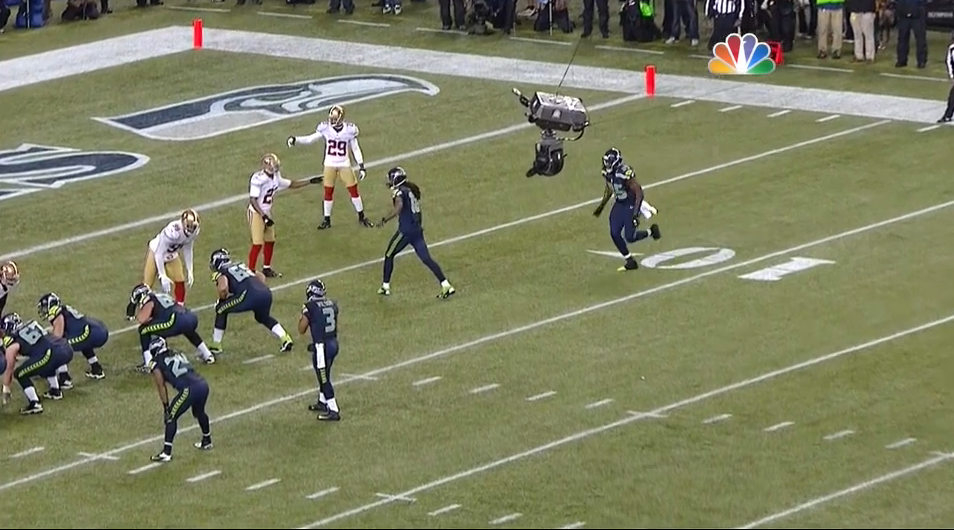 As McCoy settles in tight, inside of Rice, you can see CB #29 Chris Culliver motioning toward his safety, Donte Whitner. In the nickel slot is #22 Carlos Rogers. This is the guy that Wilson will be keying in on. 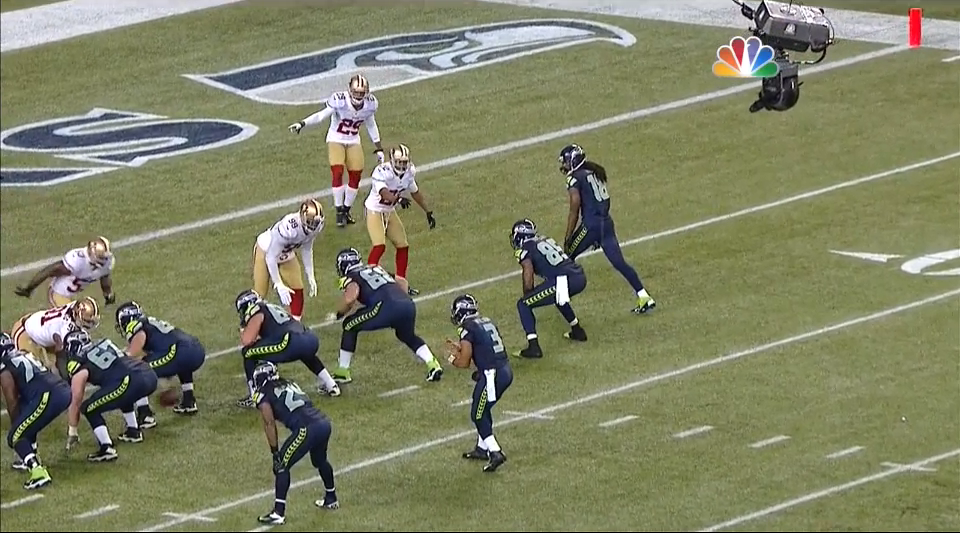 In typical Russell Wilson manner, he calmly throws a touchdown pass despite dropping his mouthguard while barking out the cadence and up against a now-nearly-to-zero play-clock.

As the ball is snapped, you see that Rogers blitzes. This is all Russell Wilson needs to know. McCoy becomes his hot outlet and is marked in man-to-man with Donte Whitner, who starts out the play in the middle of the field, probably at least 10 yards deep. 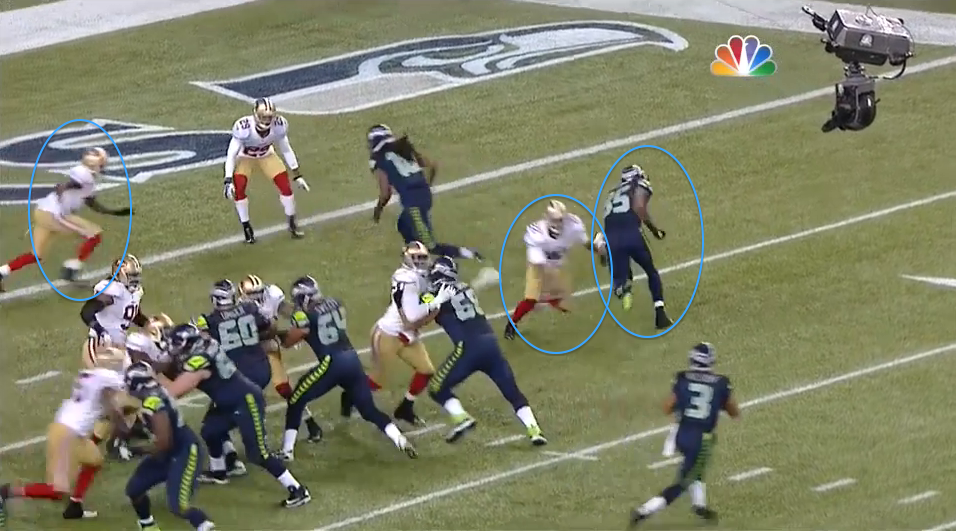 McCoy has several steps on Whitner so Wilson just has to get the ball out. 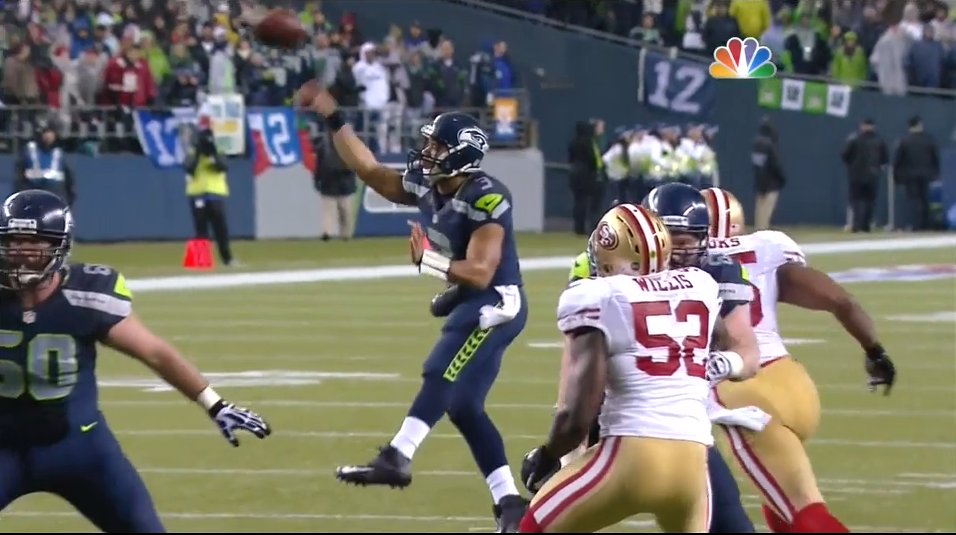 Now, just watch as Sidney Rice does the little things - he runs his route and slows down in front of Whitner's path - it's a pick route without actually being a 'pick'. He simply takes away Whitner's angle to McCoy for a split second and that's all that Wilson needs.

Wilson's pass isn't where he'd like it to be - a bit too inside and slow, he's probably wanting to put the ball out to McCoy's outside shoulder- but it gets the job done.

Their body language says it all: 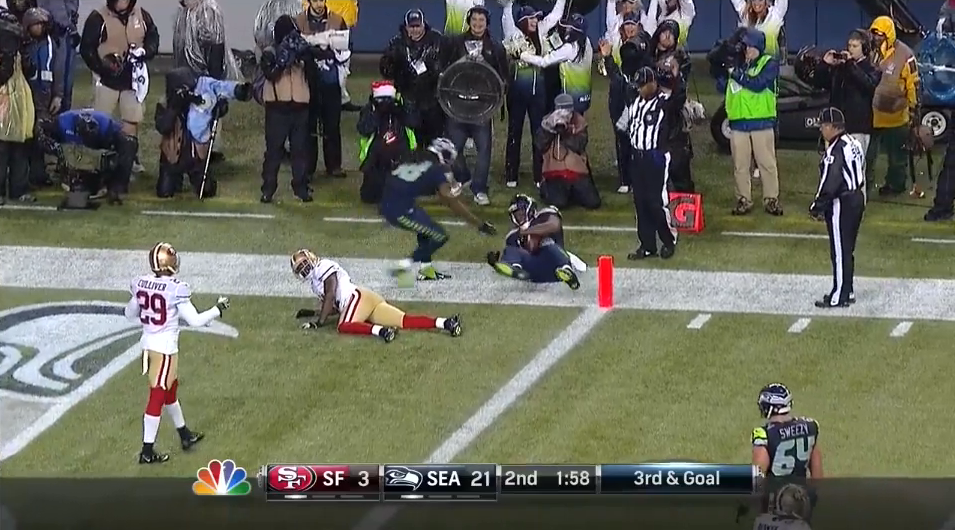