I hope I can enlarge your (football) vocabulary.

Share All sharing options for: A football play, translated

Like many other sports, football resonates a type of language within its play. Sure, you have the official terms like a "touchdown" meaning a team scores six points when a player has the ball in an opponent's end zone, or you tell someone Chris Clemons had a sack when he takes down the quarterback behind the line of scrimmage (which in turn means the starting yard line of a play). As you experience the game more, whether by watching more plays or listening to commentary or coaches or even playing for a little bit, you realize that there's a natural rhythm and flow to the dialect itself. For example, "running up the middle" suggests that the running back might have broken a lane between the guards, while "the pocket collapsed" infers that the defensive lineman pushes the offensive lineman so far back that the quarterback becomes trapped within his own team.

Learning this language and dialect is not only important in becoming an objective fan - as you already know, a lot of the writers here put out analysis on top of analysis that not only breaks down plays but also educates us on this rhythm we are hidden from within the film rooms and on the field conversations. Likewise, by viewing the game in this new tongue, it makes appreciate the beauty of certain plays more.

Let's see an example. I selected one play against the Niners last year. The play was 14 yards and helped the Seahawks get a first down. It was a pass from Russell Wilson to Sidney Rice. Here are some of the different versions that tried to transcript what happened: 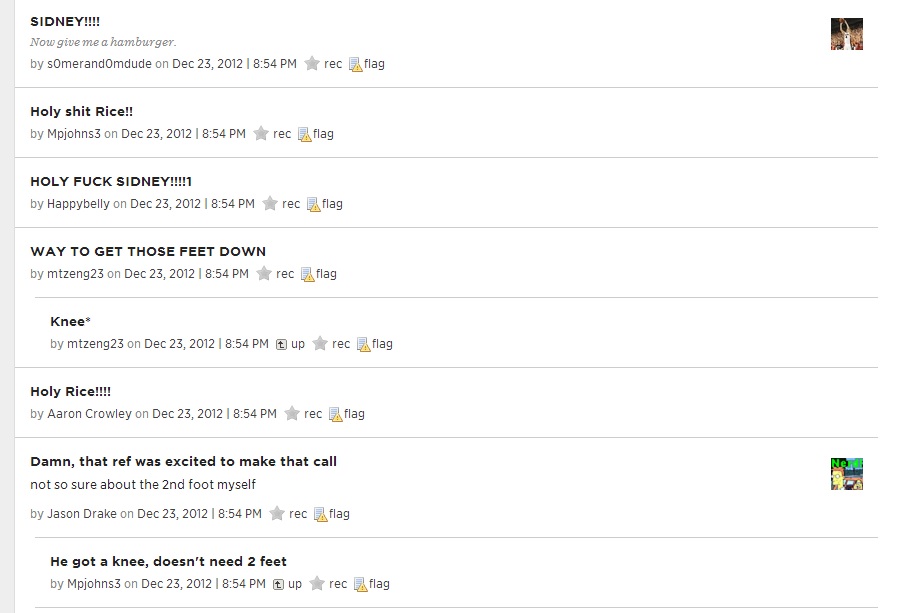 "And that pass floats and is pulled in at the 22 by Sidney Rice."

You get the idea. But sometimes, words don't do it justice, and it is only when we break it down to the language and rhythm that is football can we fully admire its beauty.

In this play, he Seahawks enter the huddle in a 11 personnel, with one running back in Marshawn Lynch and one tight end in Zach Miller. They would exit in a shotgun, strong right, trips left formation, meaning that the 3 WR would line up on the right side and Miller will be the lone target on the left. Yet Miller also seemingly distances himself as a receiver versus a tight end, lining up a good five yards away from left tackle Russell Okung. The order of the wide receivers are also curious, as Doug Baldwin slides himself in the slot while Golden Tate and Sidney Rice reverse roles as the X and Z on the field. Marshawn Lynch lines up to the right of Russell Wilson.

This makes the Niners counter with a pass-oriented defense for a bit, and they enter the huddle without NT Issac Sopoaga, and instead rotate in Ray McDonald as well as their third cornerback Chris Culliver. While primary known for using the 3-4 formation, the defense instead exits as a variation of the misguided four man front , with Aldon Smith shifting towards the edge of Okung. Ahmad Brooks, the outside linebacker, is brought down towards the line to blitz. As the Niners scout the Seahawks formation they continuously re-adjust their players. Donte Whitner moves down to cover Zach Miller, Culliver moves towards Tate on the outside and Tarrell Brown returns inside against the slot. 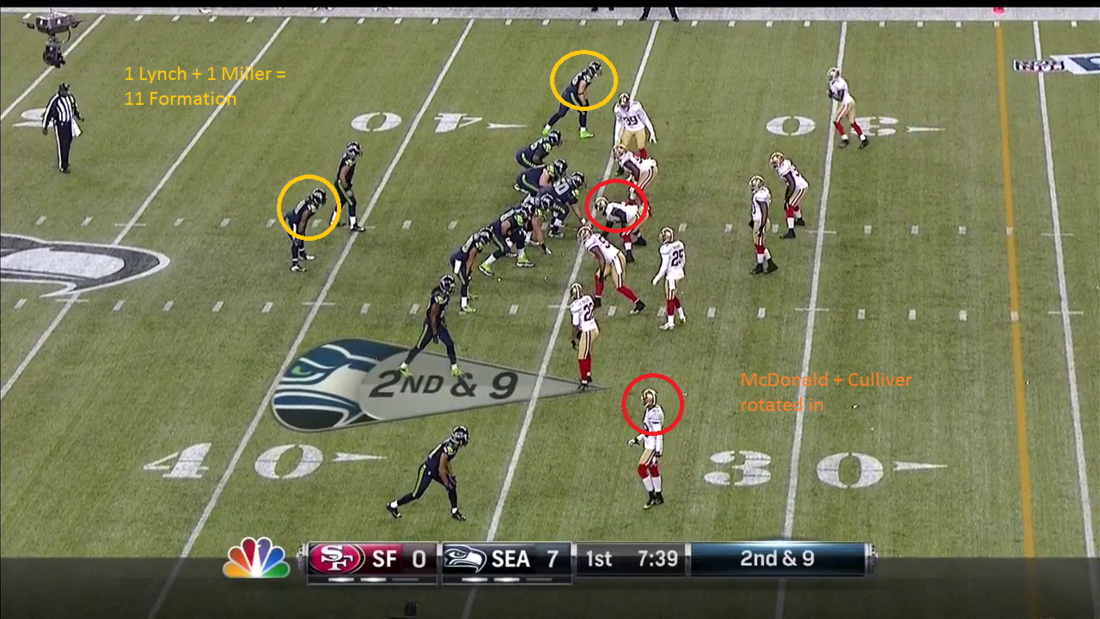 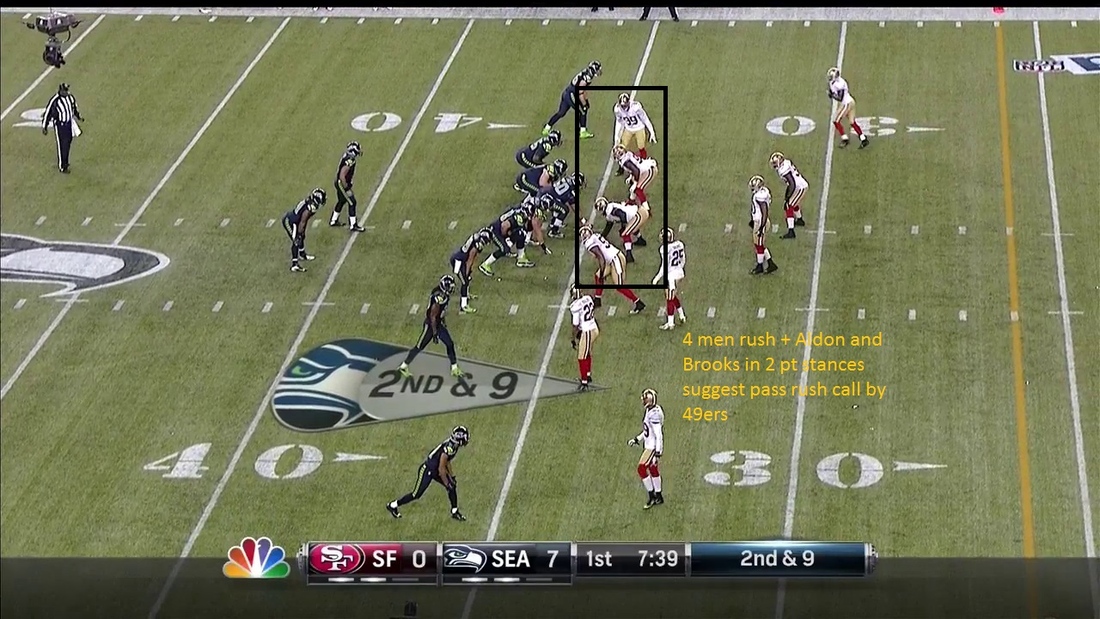 Meanwhile, the Seahawks quarterback, Russell Wilson, continues to study the defense. He knows that the play will be a pass, so he reads what the DB's are showing. From the way the Brown, Culliver, Whitner and Rogers are playing it seems to be man-on-man coverage . Having neither of the ILB's spread out and Brown stacking himself behind Brooks to guard Baldwin seems to solidify his guess. As the free safety Dashon Goldson is playing deep, Wilson now knows he has at least two one-on-one matchups to exploit, and both Rice and Miller hold the advantage on size with their respective defenders. 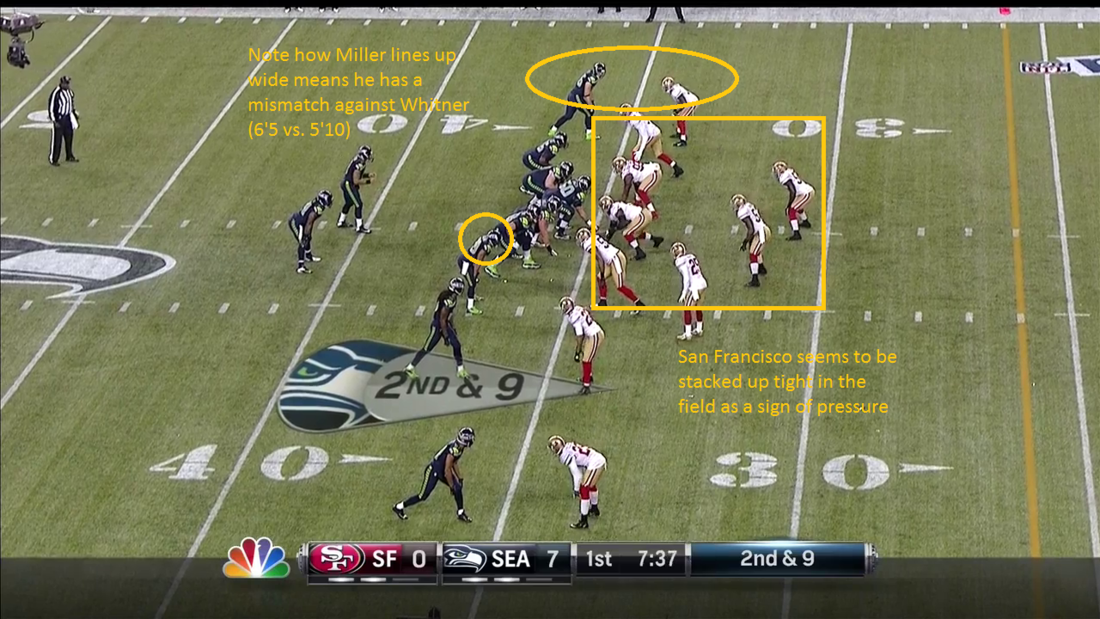 Wilson also realizes that he is running a play action with Lynch, which means that the middle of the field, that seems so closely regarded by Willis and Bowman will hold against the fake. While it might not be open enough to warrant a throw to Zach Miller, who is running a cross, it will definitely separate the entire right side of my line and receivers from additional coverage. In terms of his options, Golden Tate, who is running a deep fade down the sideline, will be his first option if he is open. Rice will be his second, Miller his third and Baldwin his checkdown. Here's the play as drawn: 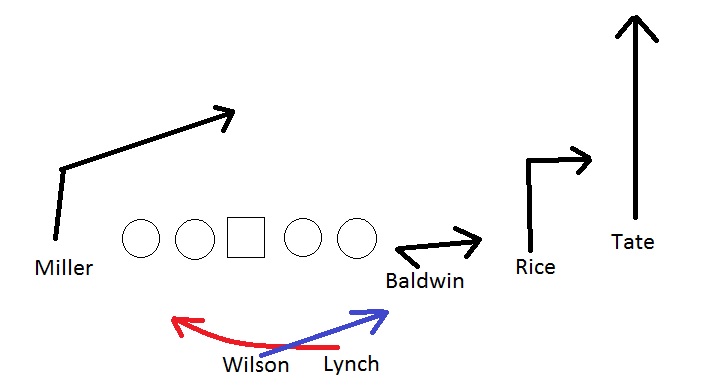 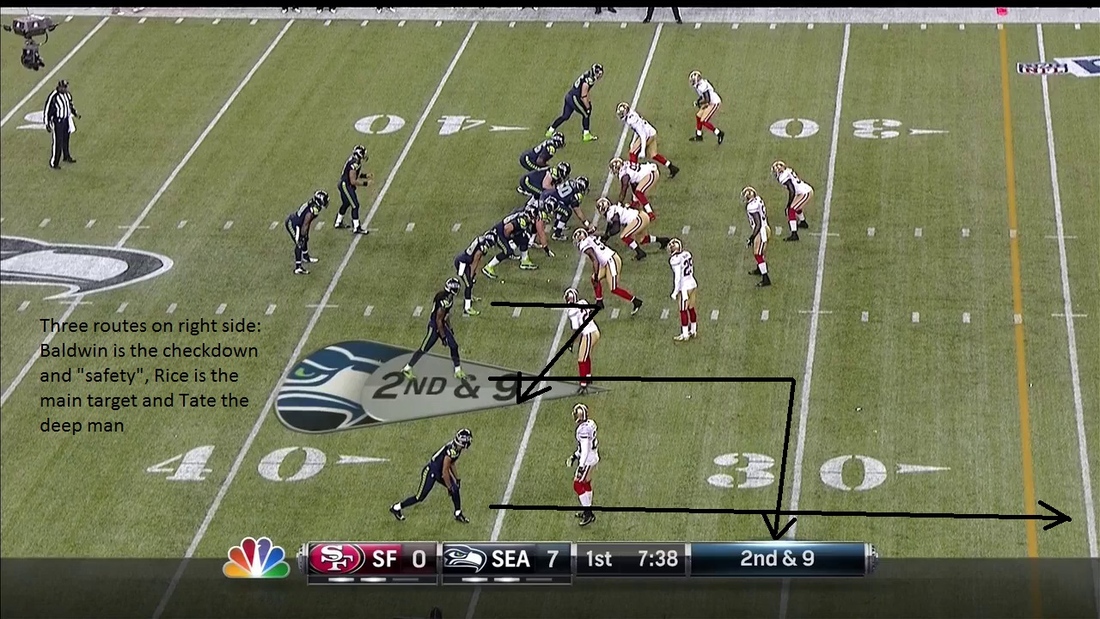 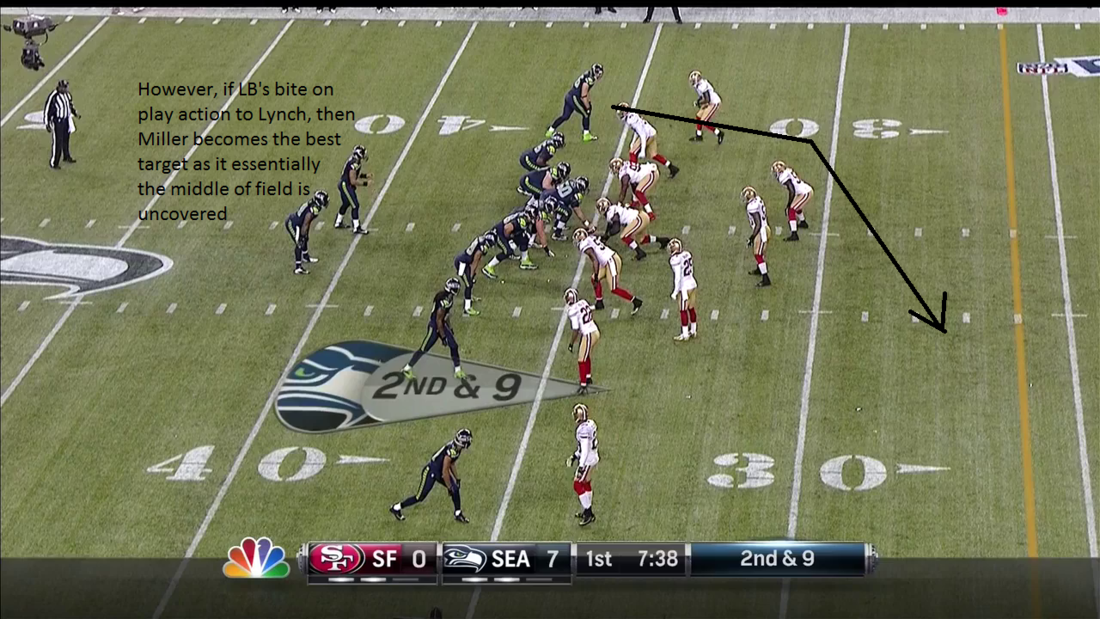 Ball is snapped, and Wilson fakes play-action via the read option, isolating Ahmad Brooks and forcing him to defend a particular man. Because Brooks is running towards the both of them like a bat out of hell, Baldwin checks his body against Brooks briefly to stop him from blowing up the play (and to sell the play action). 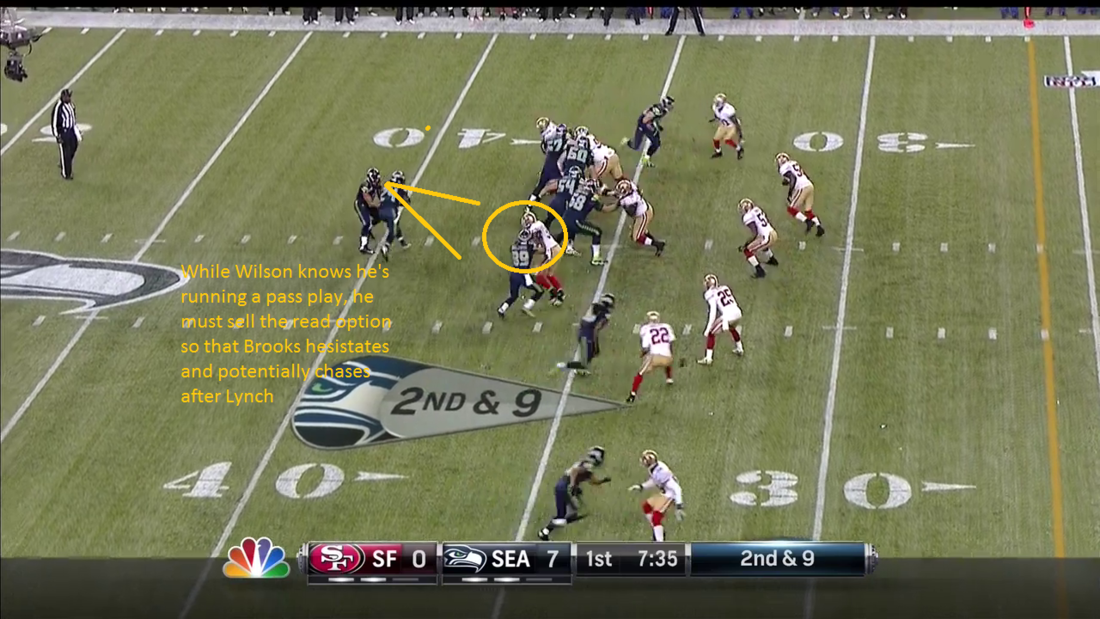 Meanwhile, the entire of the offensive line is cascading towards the left side along with Lynch, and both Willis and Bowman buys the fake, shifting their bodies towards their right. Miller begins to run his route, but the safety Whitner is still checking if it's run or pass as Lynch is running towards his side. 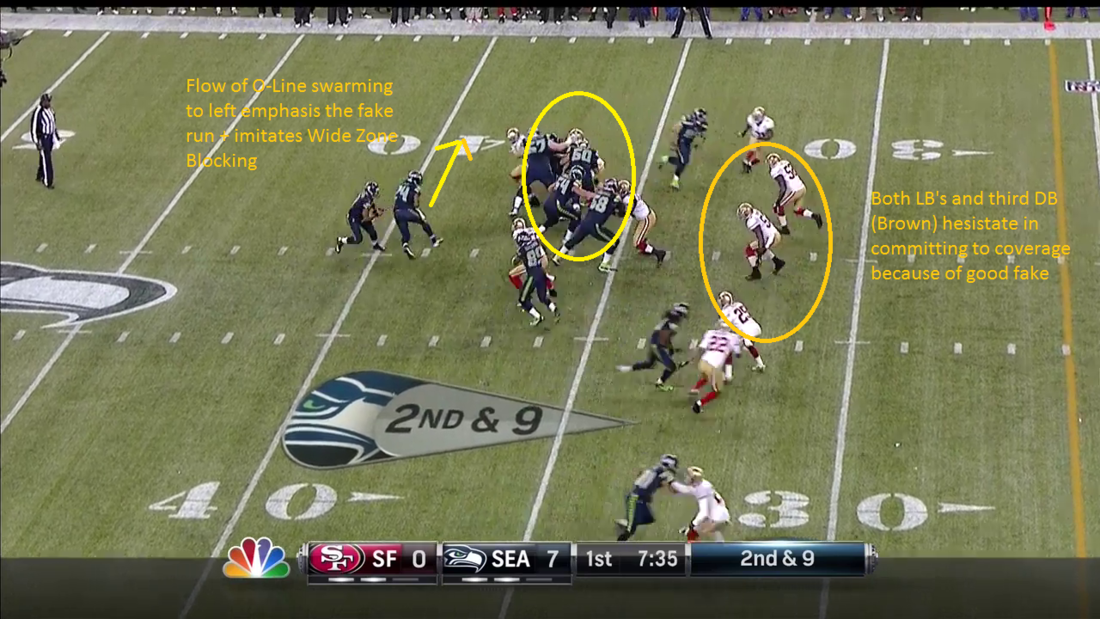 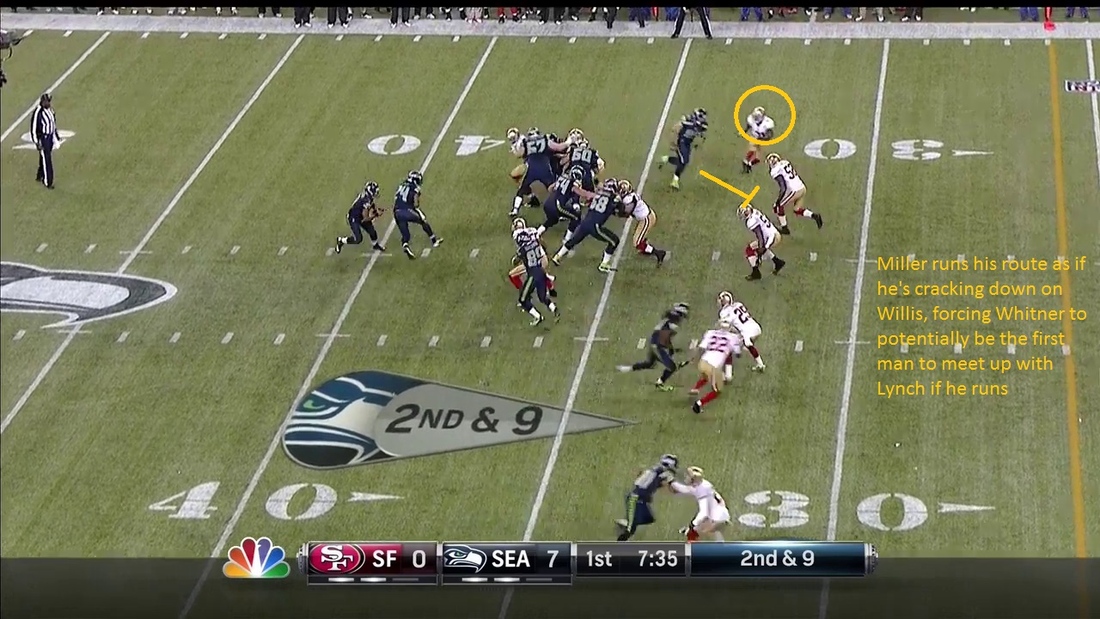 Wilson finishes his play-fake and finds that Brooks was reading him all along. Knowing that the entire left side of his pocket is safe, he begins to roll out to his right and keeps pumping the ball waiting for Brooks to bite and jump up for the pass. By this time, Baldwin has already rotated himself into the open field and is currently racing against Brown and the now-realizing-it's-a-pass-play Willis. 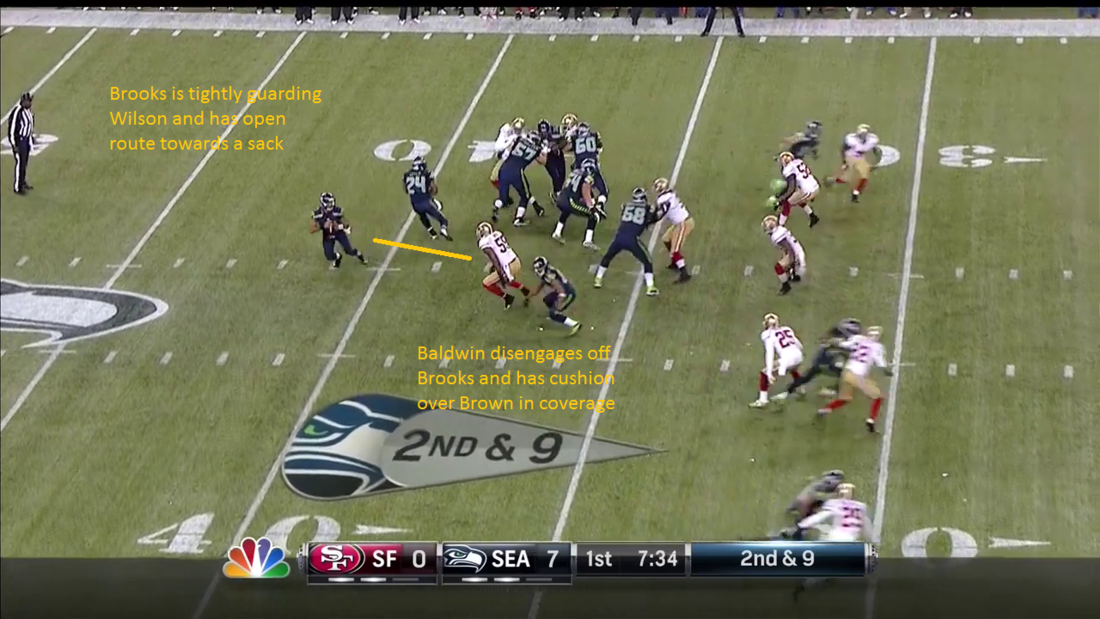 At this time he counts the coverage again. Miller is open in the middle of the field and is going against Whitner himself, but from where he is standing it seems unlikely that he want to make that throw unless it is necessary. Wilson shouldn't also throw the ball with Patrick Willis covering Miller underneath. Tate is handling himself well against the deep route, but because Dashon Goldson is staying back the latter has already decided to provide help for Culliver. This means that there are only two choices left - Baldwin, who is the checkdown, and Rice, who should be supposedly in single coverage against Carlos Rogers. 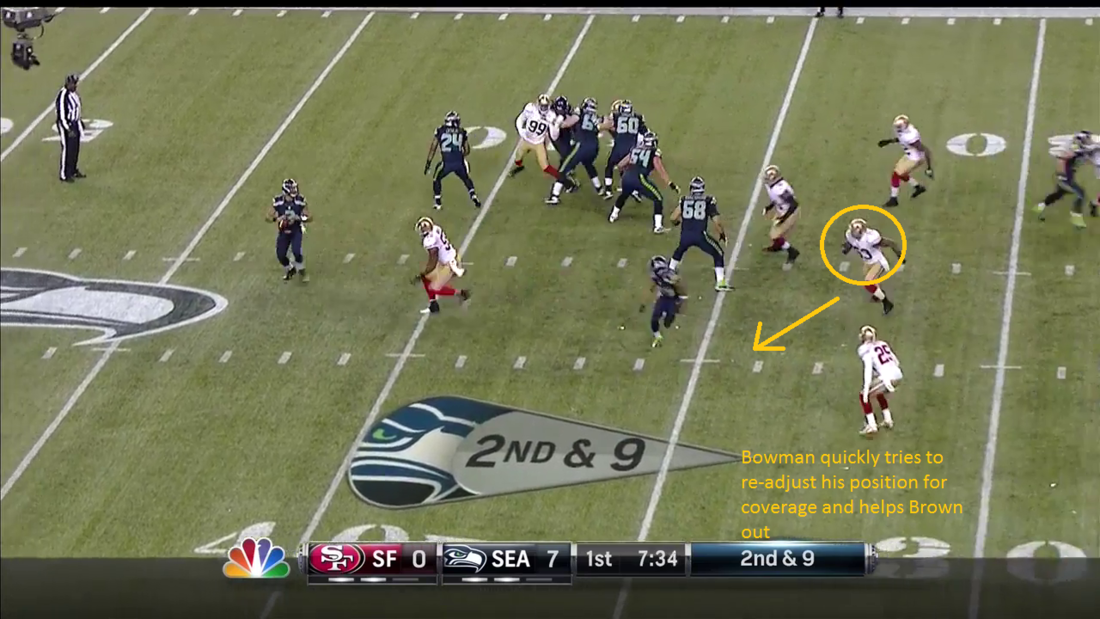 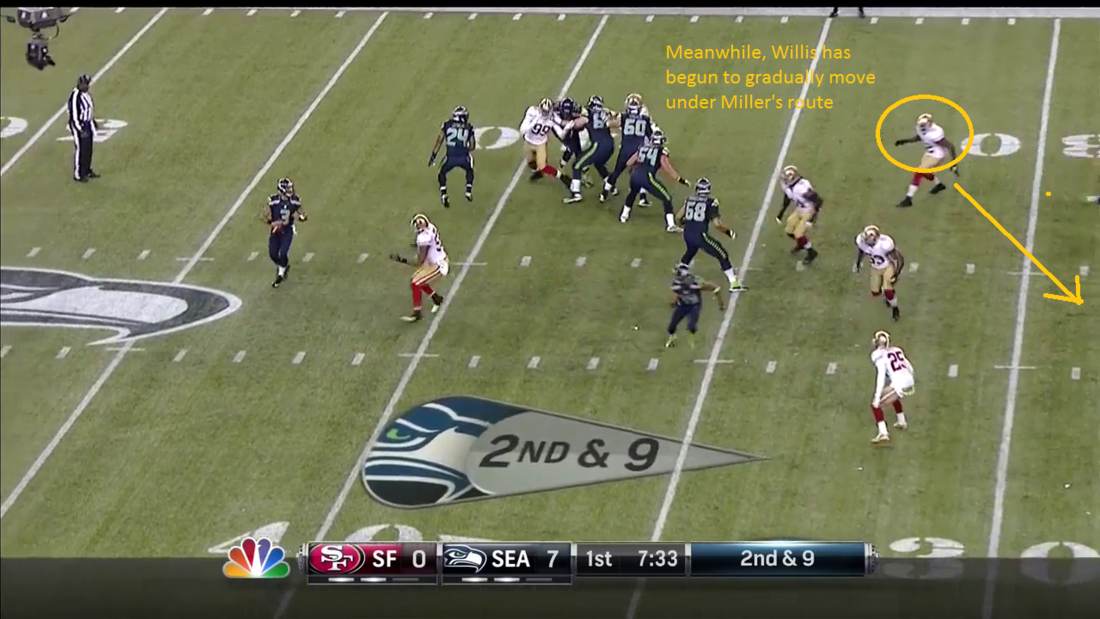 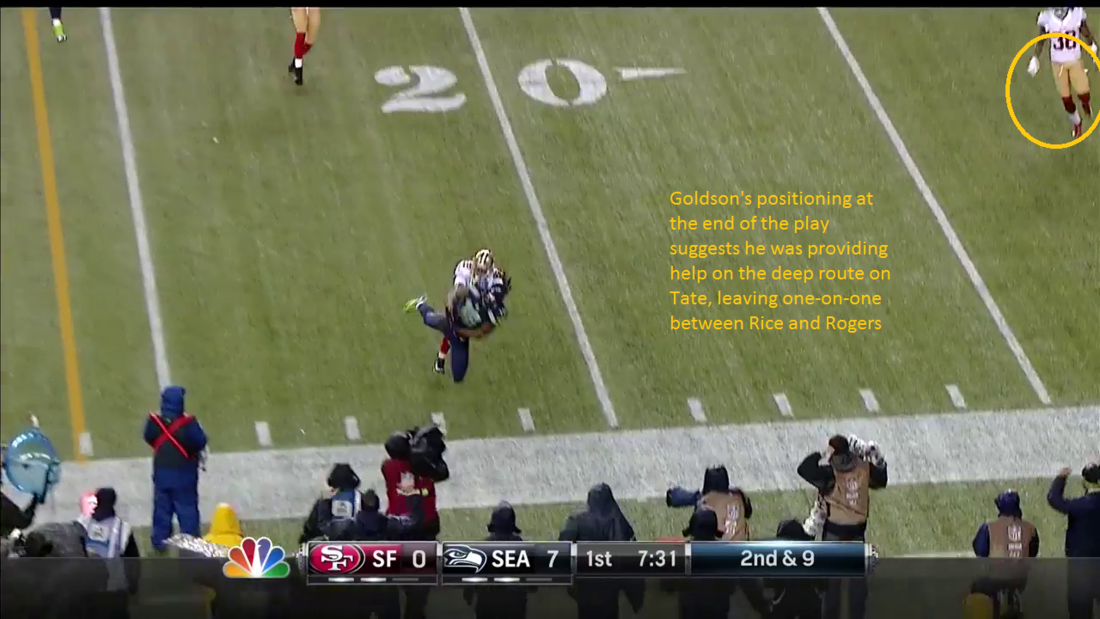 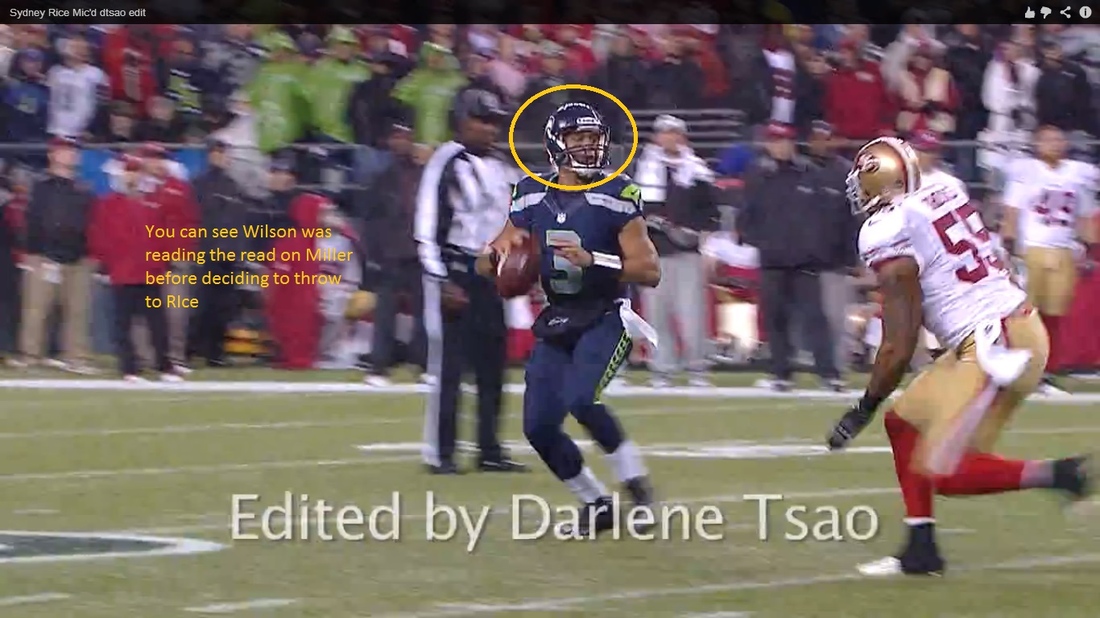 In Rice's position, he runs a quick out route against Rogers and gains enough separation to beat him one-on-one. By the time Wilson will throw the ball, Rice is in a position to be the only person to catch it, and also more or less, have the only way out towards the sideline. 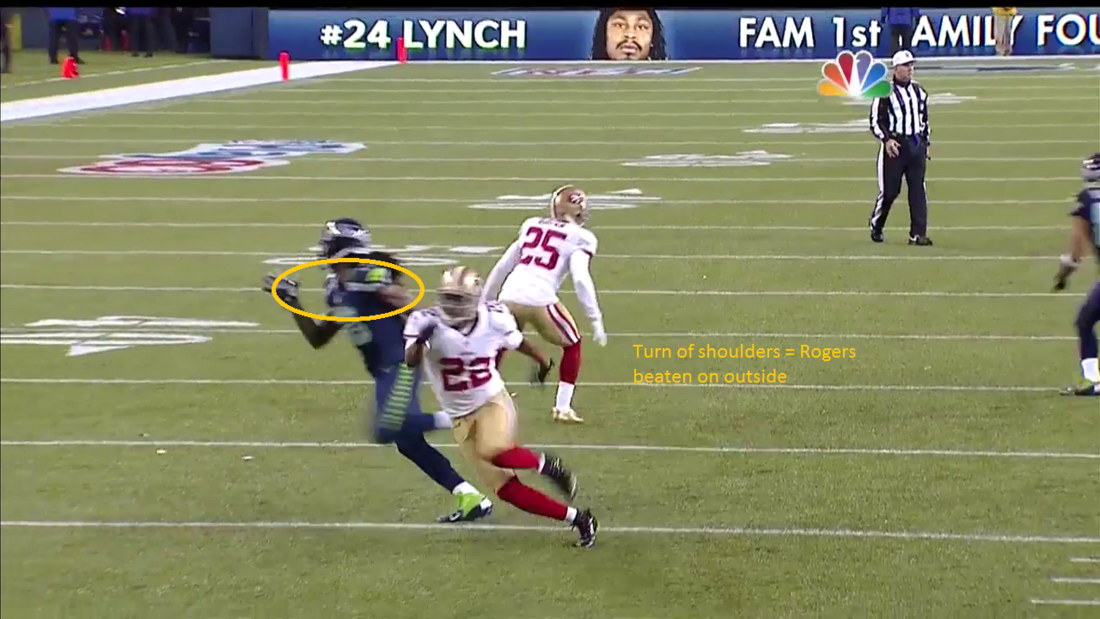 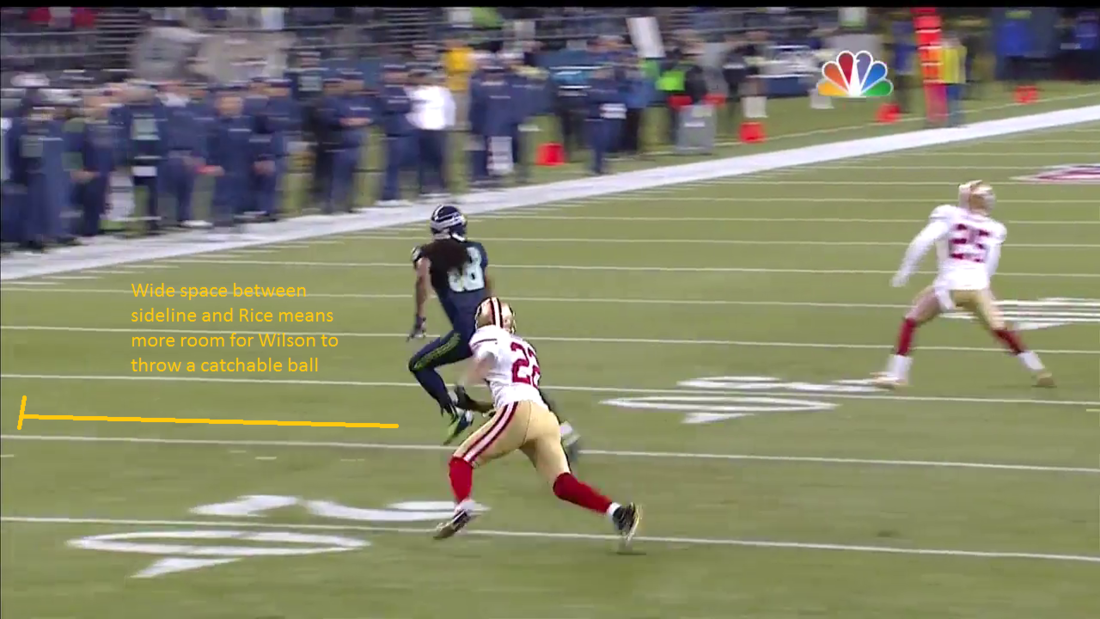 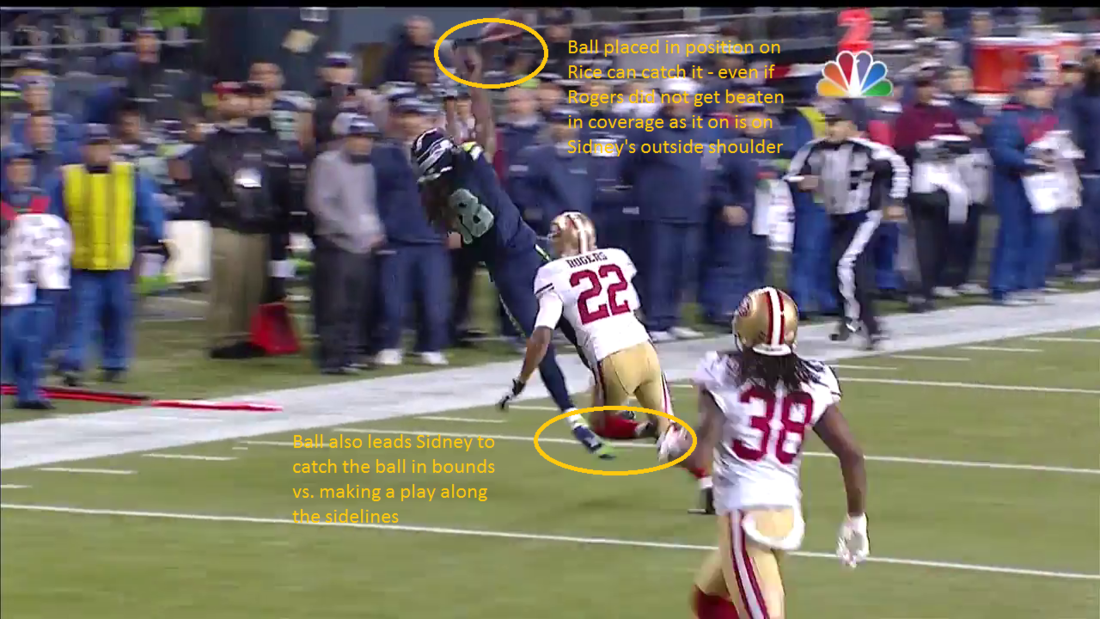 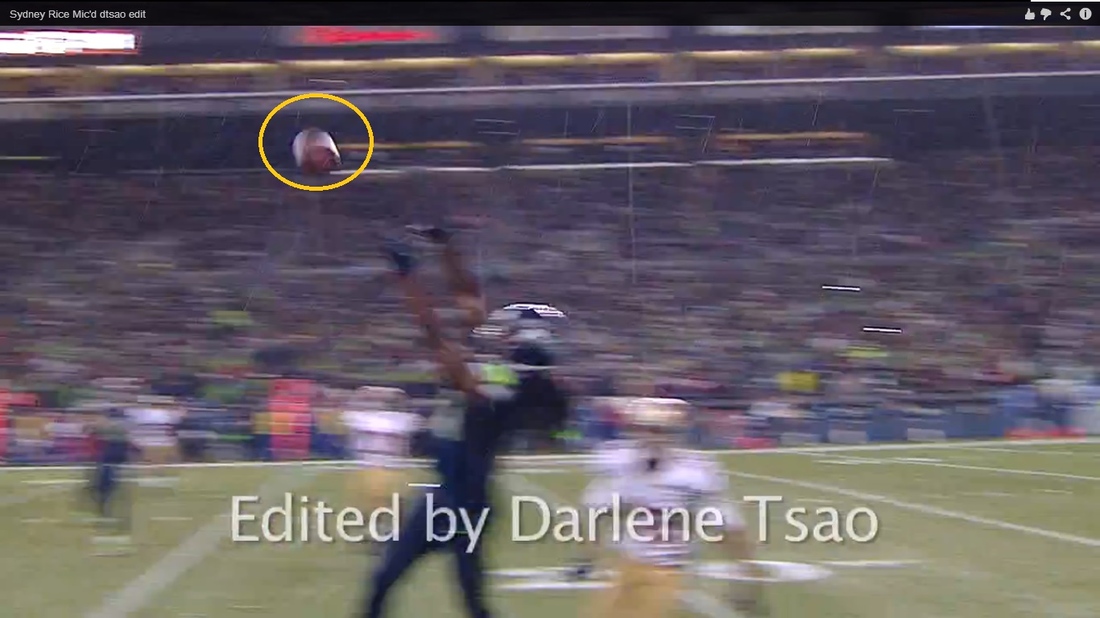 Now for the throw. Wilson pumps once to get Brooks to jump, but he still does not have a clear shot of where Rice is. His best chance is to loft it high towards the edge of the sideline, so that Rice can take advantage of his size and catch the ball: 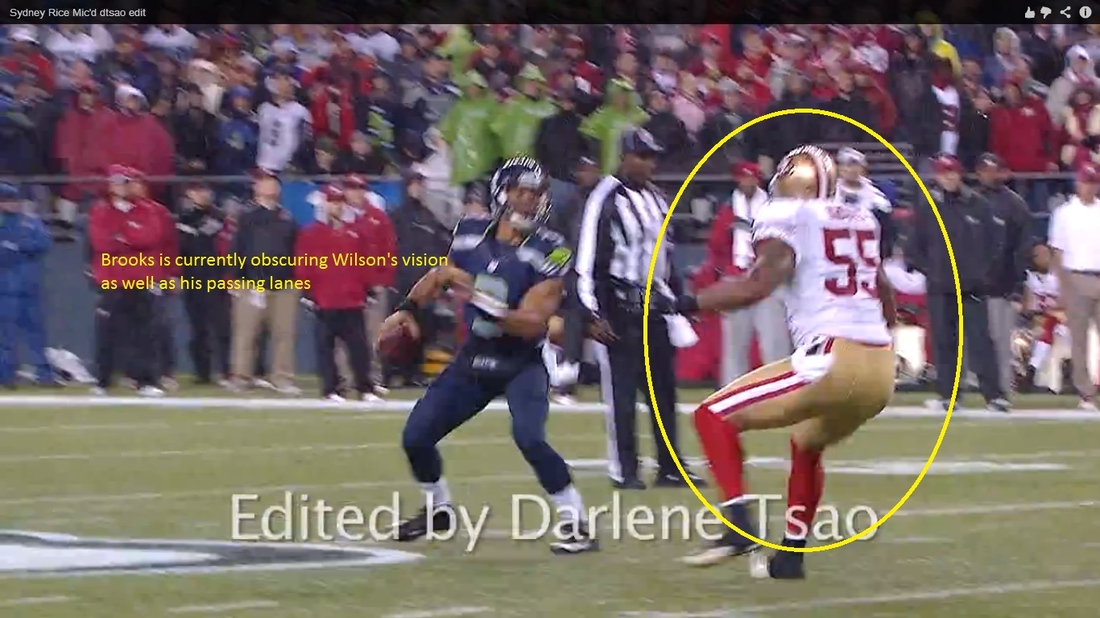 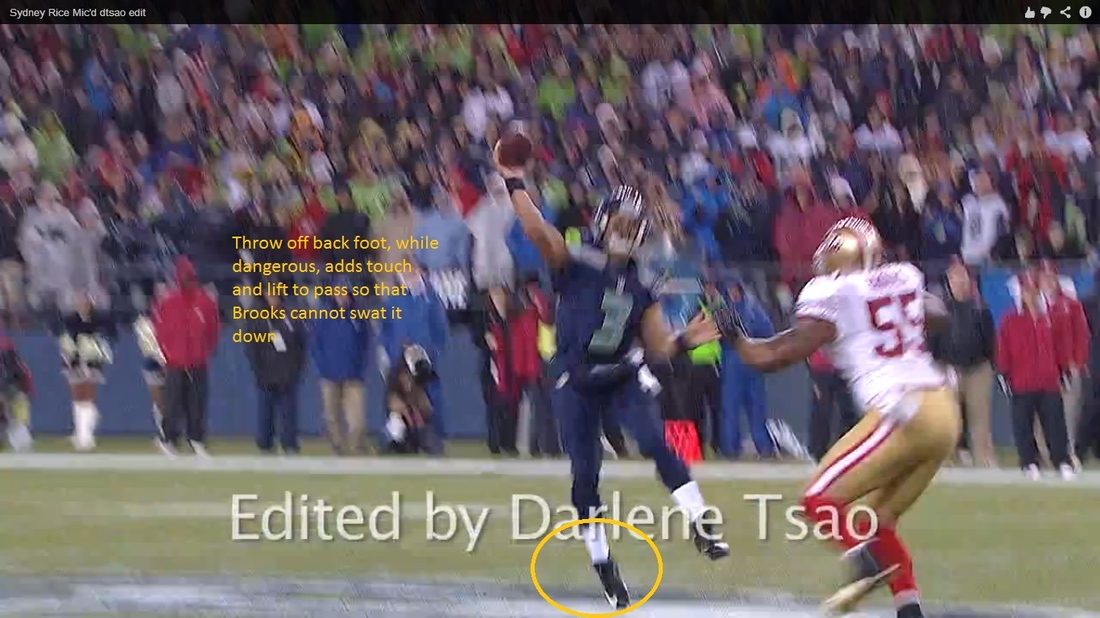 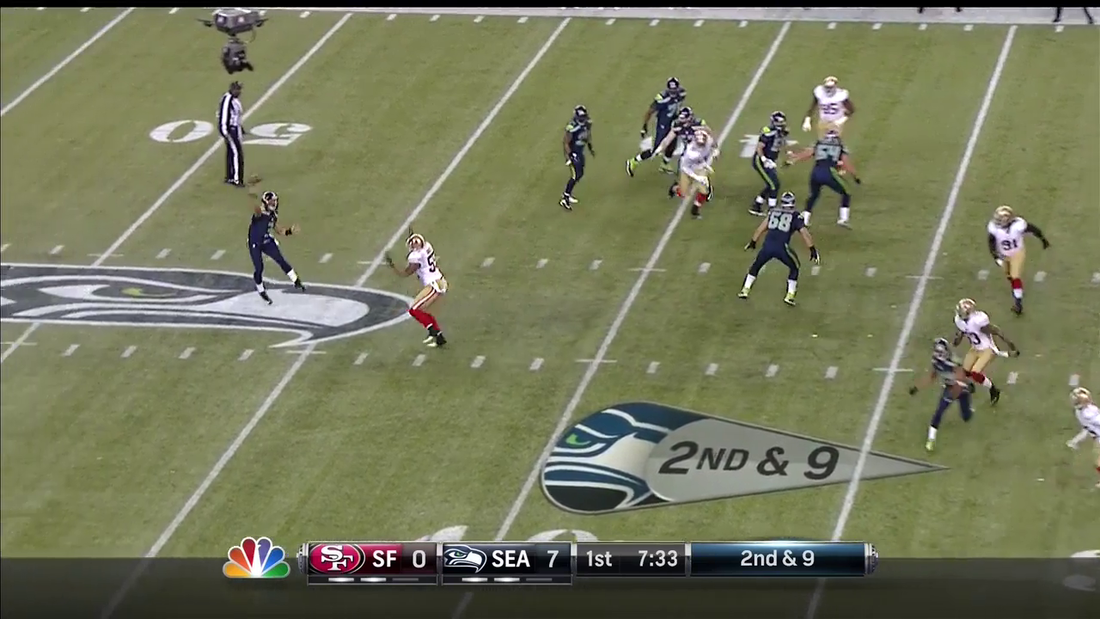 And sometimes, that's all that needs to be said.

(Special thanks to Q13Fox SSN & Darlene Tsao for the NFL Films-like footage!)