More on how the Seahawks can use Percy Harvin, personnel packages and formations to create mismatches.

Share All sharing options for: Percy Harvin: Creating mismatches at running back

"There'll be a little bit of running back coming up." - Percy Harvin

Harvin is going to line up at RB during some plays next season. As Danny pointed out, this will likely be most effective out of "02" or "01" personnel packages (ie, personnel groupings with no RBs). Here is another, closer look at how this may be executed.

In the following stills - a 3rd down and 5 play, 9:50 in the fourth quarter, of Seattle's 2nd matchup with San Francisco - the Seahawks are in "01" personnel with Golden Tate, Doug Baldwin, Zach Miller, Deon Butler, and Jermaine Kearse on the field. To defend the Seahawks' 4 WR and 1 TE package, the 49ers send out 6 DBs and 2 LBs. 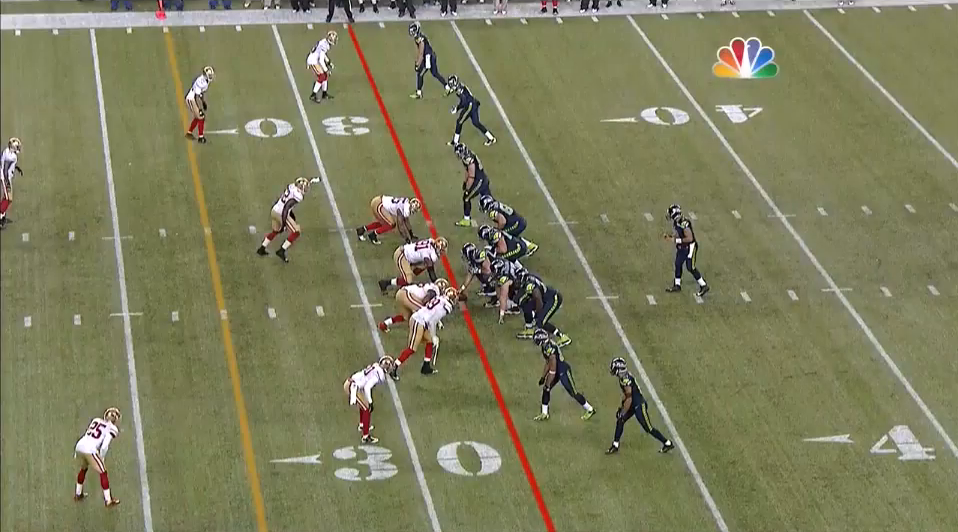 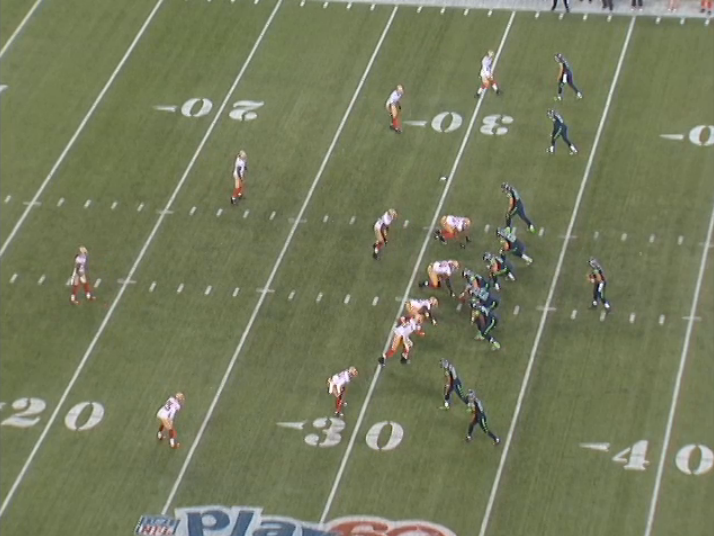 Notice that All-Pro LB NaVorro Bowman is not on the field for the 49ers against this personnel set. He was substituted out and DB Perrish Cox came onto the field so that Cox could play man coverage on Baldwin in the slot.

This type of defensive response would be a situation in which Seattle could motion Harvin into the backfield in order to run the ball at a dime, pass-defense-styled grouping (though they may not want to take that chance on a third down).

In this next example, the Seahawks are now in "11" personnel with RB Robert Turbin, TE Miller, and WRs Baldwin, Tate and Sidney Rice on the field. To defend the Seahawks' 3 WR, 1 TE and 1 RB package the 49ers send out 5 DBs and 4 LBs, their very trusty 'nickel' look. 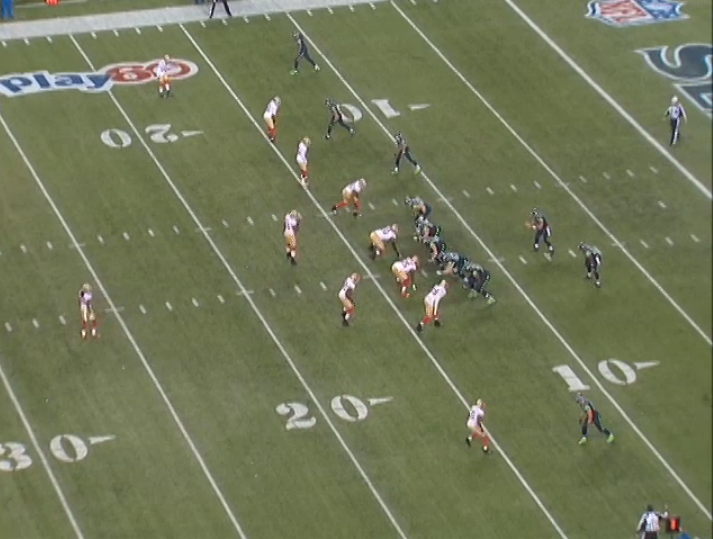 Notice that MLB #53 Bowman is on the field in this situation. Turbin's presence in the huddle allows Bowman to stay on the field because he can match up with him in man-to-man coverage. Also notice how lining Miller up out wide removes SS Dontae Whitner from the play - a read-option handoff to Turbin to the right that goes for 10 yards on 2nd down. This is the cool stuff that formations can do to create favorable situations for the offense.

On the read-option to Turbin, Aldon Smith freezes as Russell Wilson 'reads' him, Russell Okung moves into the 2nd level and annihilates Patrick Willis, Paul McQuinstan does a solid job on Ricky Jean-Francois, Max Unger gets to the 2nd level on Bowman, J.R. Sweezy gets owned by Ray McDonald, Breno Giaciomini handles Ahmad Brooks and Turbin shakes McDonald, then picks up a good gain on the ground.

Now let's imagine a way in which Percy Harvin could change this look. First off, picture what Okung would have done to a CB/nickelback if he were lined up where Bowman was instead. Harvin can line up in a way that sets that CB up for decapitation. If the Seahawks send out their "01" personnel package and the 49ers counter with their dime defense, the nickel corner is going to be manned up on Harvin.

That nickel CB would now be playing in space against a very fast, versatile opponent. The variety of ways in which Seattle could utilize Harvin almost automatically forces the opponent to start thinking instead of reacting on defense. This hesitation coupled with relative small stature would most likely result in being juggernauted by Okung. This is just one example of a mismatch that lining Harvin up at RB can create.

Here are some diagrams of how the read-option play was run out of "11" personnel and what it would look like out of "01" personnel.

11 personnel with Turbin set up in the backfield: 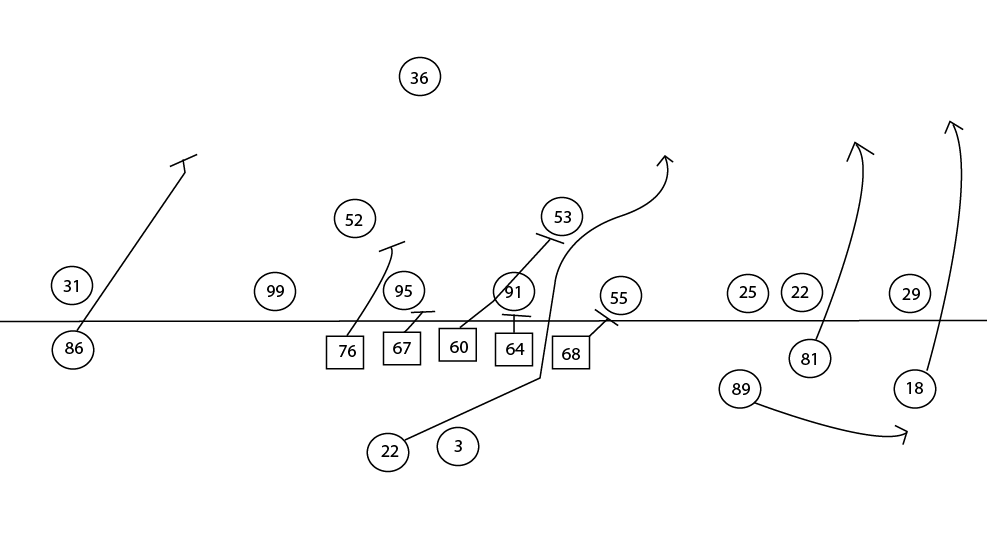 Imagine if Okung juggernauts that nickel CB, J.R. Sweezy actually block his man, James Carpenter (in for McQuinstan) seals off what would be Justin Smith (not excited about Smith's return), everyone else does exactly what they did before, Harvin hits the cutback lane created by Okung's juggernauting and Carpenter's seal. Harvin then shakes Eric Reid and does that foot drag celebration he does into the end zone. This would be fairly triumphant. 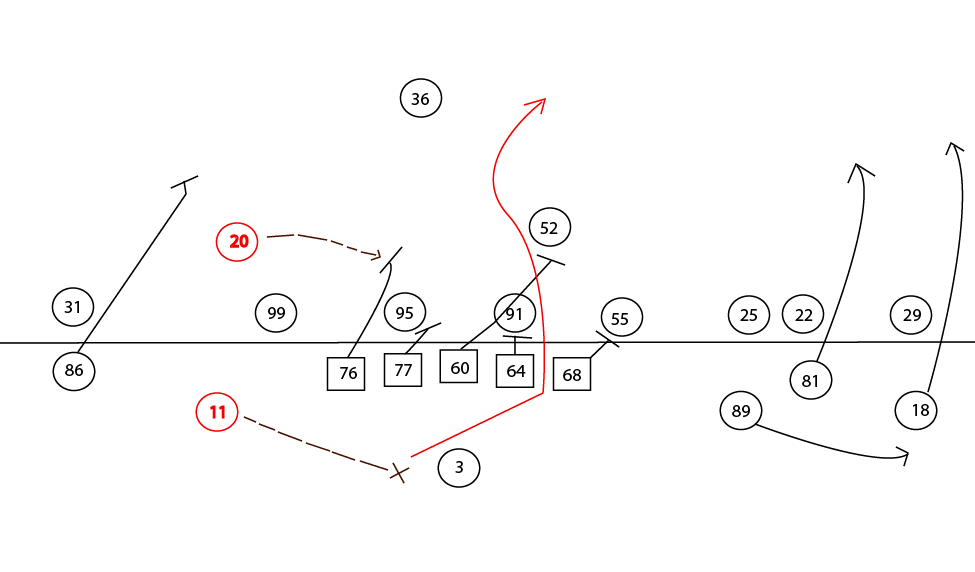 Now, the fun part about it is that Harvin is not only a threat to run the ball when lined up at RB but he is a threat to catch it as well, obviously. The following GIF is of Turbin on a wheel route that he drops against the 49ers in their 1st match up.

Again, notice that Bowman is on the field because the Seahawks are in "11" personnel. The 49ers are in Cover-1 with Bowman and Goldson in zone and everyone else in man. Miller sets a pick on Willis and Turbin sprints wide open up the sideline in which looks to be a huge gain, but is ultimately dropped.

Imagine instead of Turbin running this wheel route, Harvin runs it. Again, if the Seahawks send out their "01" personnel package and the 49ers counter with their dime defense, the nickel corner is going to be manned up on Harvin. Anytime - and this is a big part of the 'dictating matchups' thought process - anytime you can get an All-Pro off the field in favor of an unproven nickel corner, this is generally a good thing.

This is a corner who may have not received any practice time against this play, is unaccustomed to playing inside and/or is so worried about the run that he is cheating inside which increases the chances of this turning into a big play for the Seahawks.

Here are some diagrams of how the play was run out "11" personnel and what it would look like out of "01" personnel. 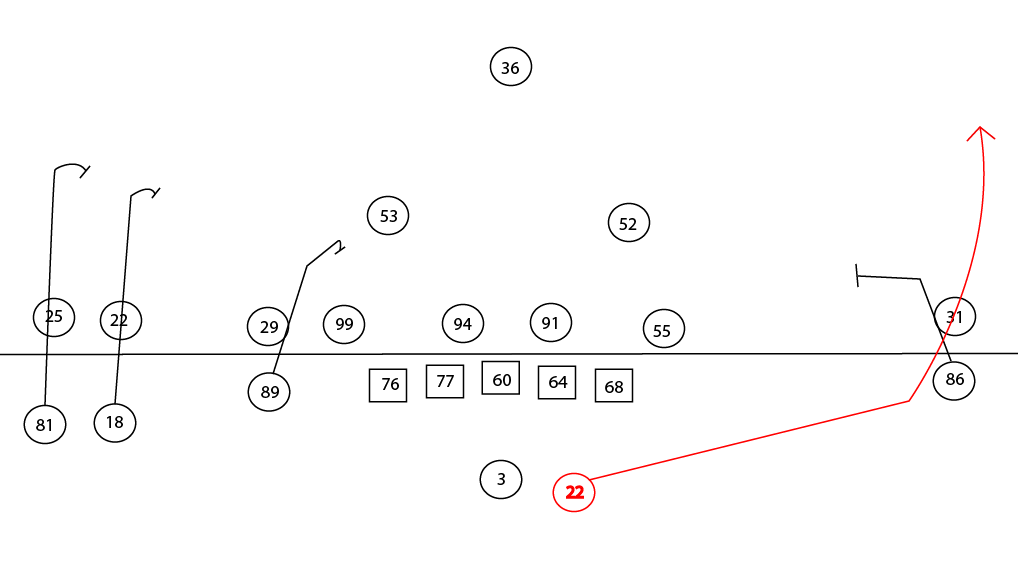 01 Personnel with Harvin in the Backfield 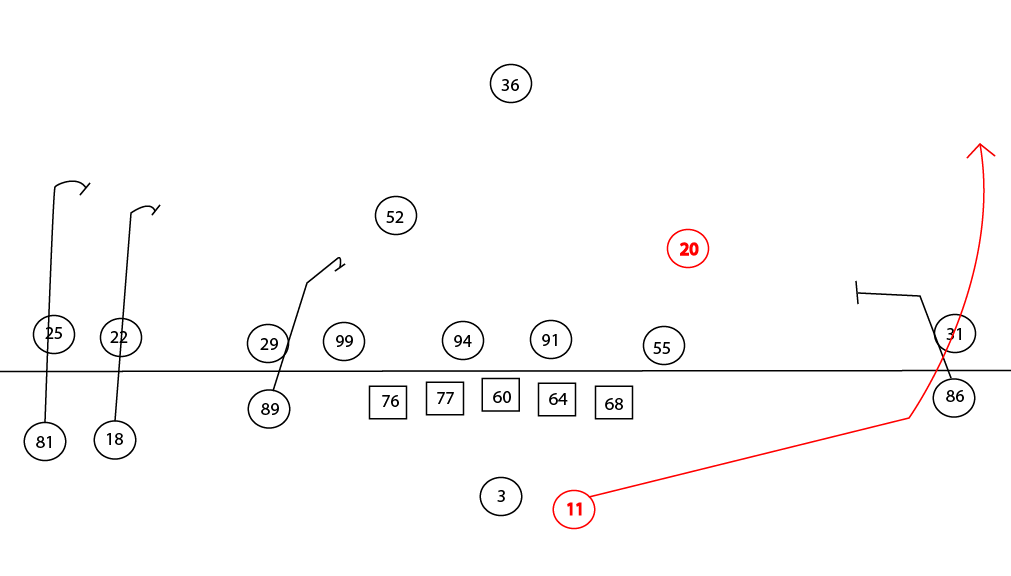 The beauty of these plays is that they already are in the playbook. Darrell Bevell does not need to create and teach everyone new plays to provide innovative ways to get Harvin the ball. He can just occasionally change where Harvin lines up in base plays to create favorable matchups for the offense. This won't be a frequent thing, but it will be another way to keep defenses off balance, create favorable match ups and get big gains on offense. Subbing Harvin in for Turbin is only one wrinkle, but it served for the examples in today's post.

One more for your imagination: Picture being up 14-0 against the 49ers at the start of the 2nd quarter on Sunday Night Football in the second week of the 2013 season. It is 3rd and 3 and the Seahawks are on the 49ers' 45 yard line. The Seahawks send out "01" personnel and the 49ers counter with their dime package. The Seahawks run Harvin on a wheel route out of the backfield, Miller sets a pick on the nickel corner, Harvin makes the wide open catch, shakes the hell out of rookie Eric Reid and then does the food drag celebration thing into the end zone.

It is now 21-0, the 49ers are down big on the road, they have to adjust their style of play, the Seahawks completely control the ball game and it is just going to get louder. It's this type of momentum-changing play that I imagine Percy can bring to the offense, right out of the gates. This feeling of excitement around game-changing, explosive plays is probably similar to when the Seahawks were up 14-0 at the start of the 2nd quarter in Week 16, and Richard Sherman returned the blocked FG by Red Bryant to take a 21-0 lead against the 49ers last year.

The potential for these moments is part of the reason why Harvin is the highest paid Seahawk EVER. His versatility and athleticism create a lot of opportunities for huge plays. This not only makes the Seahawks better but also more entertaining (if any such thing was possible). This is why all the reports from people who have witnessed him practice are all giddy with excitement over his ability. Imagining plays like these provide even more reason to be excited about Harvin on the Seahawks.

Is it September yet?